Apparently we were not supposed to ship the truck and camper back to the USA and miss the last five countries in South America.  When it came close to time to leave Brazil, she decided she was NOT going on that cargo ship.  (read the last post by clicking here-  https://slowcarfasthouse.com/2021/09/11/lets-get-out-of-brazil-maybe/  So we had her trucked to a friends farm and parked her in the grass.  And there she sits…….

The engine repairs were completed (special thanks to Mike’s sister, Terri) and the truck is running strong.  But shipping it now seemed out of the question.  So, we stored it there and packed up the four of us, four suitcases, two dog crates and negative COVID tests for a flight to the United States of America.

We were fortunate to meet a fellow geocacher who lives in Sao Paulo, the city we needed to fly out of.  She and her husband welcomed us in to their home.  Their kindness is amazing, and so are their turtles!  Pacha and Nica enjoyed waiting for them to emerge, following them, sniffing them and watching them.

One of the conditions for getting the dogs from Brazil to USA is that we had to use a pet shipping company.  And we had to fly out of Sao Paulo.  This was a huge extra expense, and a little bit of a hassle.  Maybe you haven’t heard, but global travel with pets has become very difficult since COVID.  In addition to disallowing ESA’s, many airlines are not allowing pets in cabin at all, and some are just refusing to fly pets, even as cargo.  Additionally the CDC recently limited pets from many countries around the world (including Brazil) and travelers who travel with pets are in a panic.  But we were fortunate to find a reputable company.  They sent us updates of the dogs in their flight crates.

We dropped them off early in the morning and worried about them for the rest of the day.  We had chosen to fly directly to Miami.  It was the shortest possible flight out of Brazil, with no plane changes.  We felt this would be best for the dogs.  But they were in these crates for about 12 hours nonetheless.

After the dogs were checked in, we went for our COVID tests and boarding passes.  We had to have a negative COVID test to enter the United States of America.

Once that was all set, there was a lot of waiting around with masks on and social distancing.  We walked around the airport several times, and found all the geocaches at the Sao Paulo airport.  The flight was sparsely populated, so we had an entire row to ourselves.  It was a long flight, and when we arrived in Miami we had a lot to do.

First we rented a mini-van.  Then we drove to the cargo claim area, which is outside the main airport.  We picked up the importation and cargo paperwork for the dogs, and proceeded to the US Customs office for clearance.  They never actually saw the dogs, but they looked at the paperwork and asked a few questions, then stamped everything and we returned to the cargo facility to claim the dogs.  They were quite happy to see us, and get out of those crates! But honestly, I think we were more stressed than they were.

Two huge crates, four suitcases, two carry-on bags, two dogs, two humans and a lot of trepidation packed into that rental van and went to our AirBandB in Miami to sleep off the jet lag.

Once we were awake, showered and hungry, we found ourselves at a little pupusa place.  Mmmmm, any one who has traveled Central America knows the pleasure of a delicious pupusa, or five!

We were feeling quite overwhelmed with the USA.  The traffic was intense, the crowds at stores were thick, people were loud.  Geneva said that the sensory overload was the hardest part of the return.  Simply being bombarded with signs, noise, conversations, PA announcements, packaging and radio that were all speaking our native language- it was a lot to process.  She has not been in the United States of America for over two years!

Reconnecting with relatives nearby in Florida was fun.  We attended an outdoor music event.  But all of us got tired very quickly.

So we rested a little more, and then headed north to Tampa to meet up with friends and pick up our new rig.

Yep, you read that right!  Before we left Brazil we had purchased a vehicle/house to drive while in the USA.  We will call this slowcarfasthouse V3.0.  Why is it 3.0, you ask?

Slowcarfasthouse V1.0 was the OG, the original, the hardcore Volkswagen Vanagon hightop with the Ford motor and all the overlanding accessories we needed for full time living. 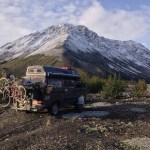 This van hauled us all around the USA, Canada, up to Alaska and throughout, Baja and much of Northern Mexico.  It was terrific rig and we learned a lot about what we wanted in a full-time, overlanding vehicle.

But now it is time to introduce slowcarfasthouse V3.0 and this one is a BIG surprise.  She was waiting for us at our friends house in Tampa, and she could not hide!

Big Bertha is a 1997 Safari Trek with a Chevrolet engine and chassis to haul all 24 feet of her!  Friends and dogs piled in for a drive.

We went to practice driving this huge thing in a parking lot.  Then we stopped by to fill the 35 gallons of propane!

Mike quickly became a pro at handling Big Bertha.  He was ready to hit the highways of the USA!

While we were getting settled into the new rig, V3.0, we hung out at our friends house.  Watched some television, which was fun for us. (we have not had a television since 2000) and gazed out the window watching for Florida squirrels.

We had a lot of work to do to make this new slowcarfasthouse feel like home to us.  But the four of us exited Brazil and made it to the USA!