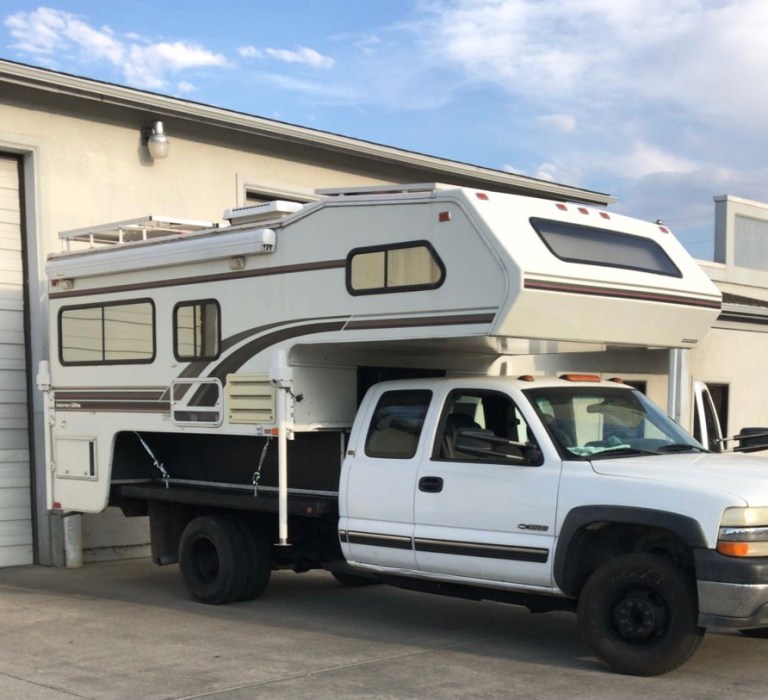 Are you familiar with the movie “Pitch Perfect“? If not, spend a little time and watch it.  But beware, it is a musical, it is in a college setting and it is filled with silly double entendres, innuendos and goofy characters. One of those characters is Fat Amy.   If you don’t have time, just watch this clip ( skip the ads )

Fat Amy (the character) is a big girl that can get down to business.  She has skill, talent and a sharp wit.  When we developed this version 3.0 of slowcarfasthouse we felt she had all that and more.  So, henceforth this rig is named FAT AMY!

( I sincerely mean no offense to anyone named Amy who has body type issues. Or anyone else for that matter.  It is truly only associated with a bad-ass character from a movie )

Fat Amy began as a cab and chassis work truck.  She is a Chevrolet 3500HD dually.  Before we owned her she had a flatbed with a headache rack  and a gooseneck hitch installed.  She lived in Texas, Oklahoma and New Mexico.  She probably worked on an asphalt paving crew, from the junk we found in and on her body!  But she was perfect in our eyes. 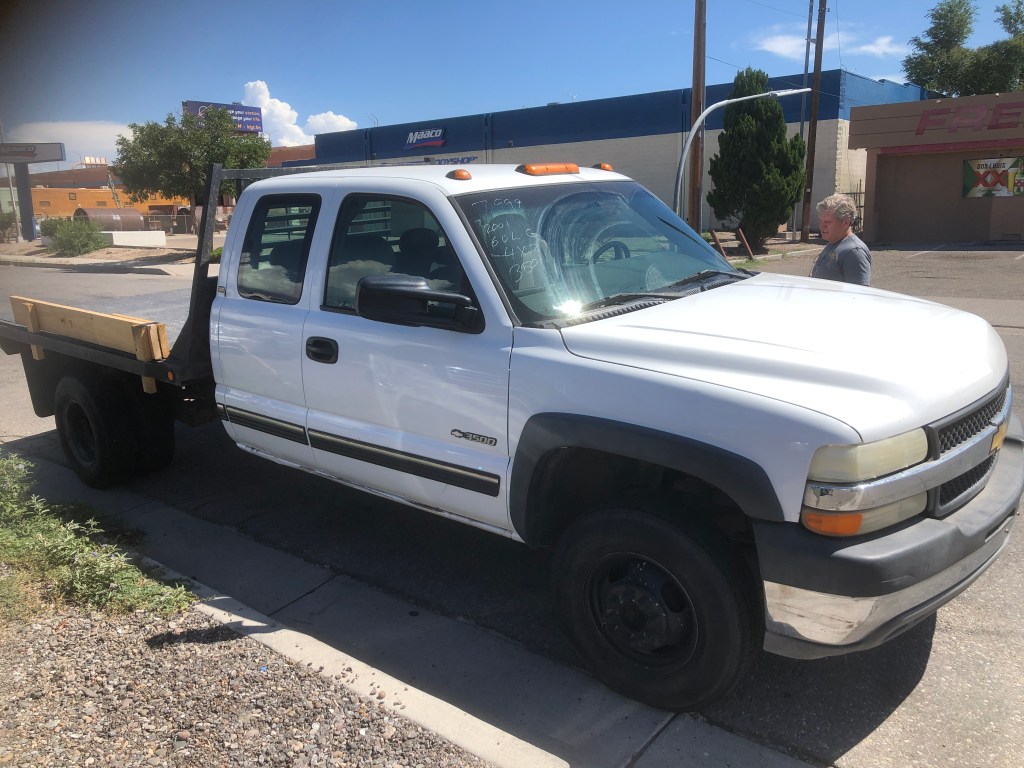 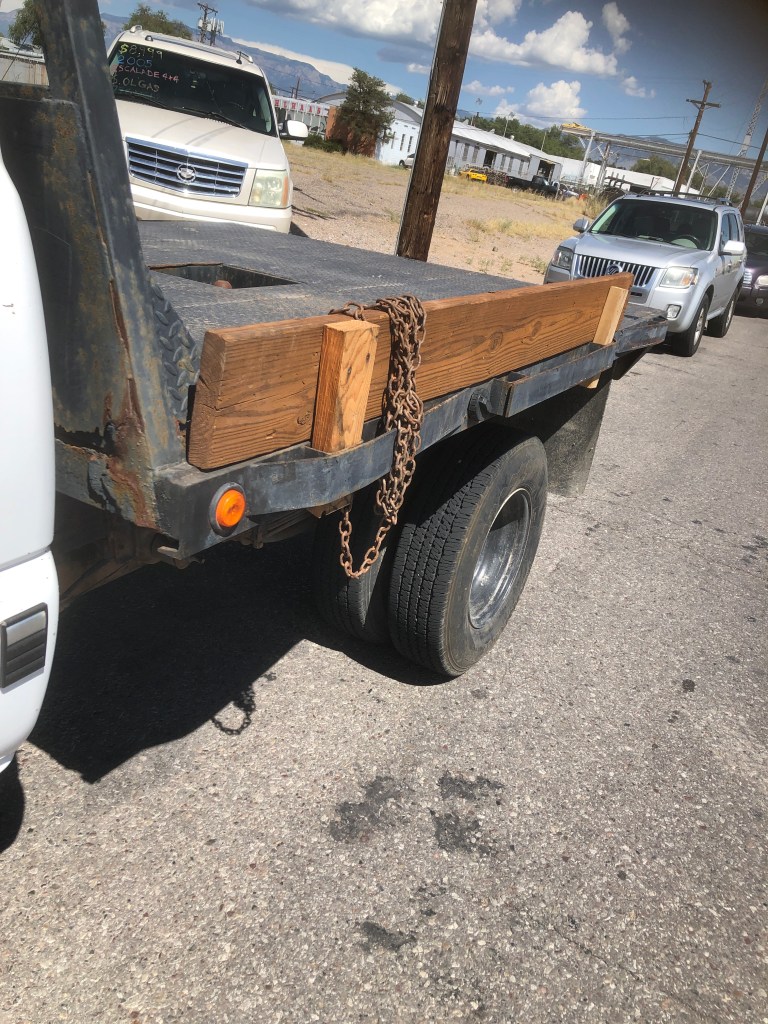 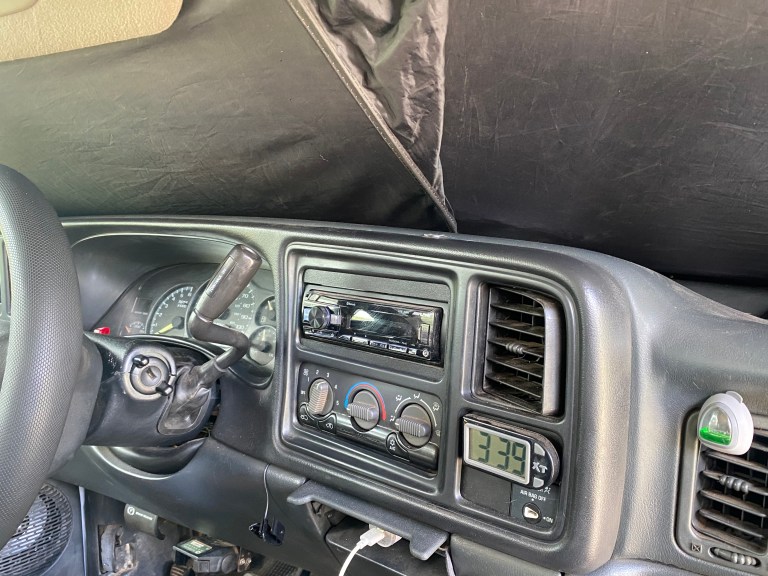 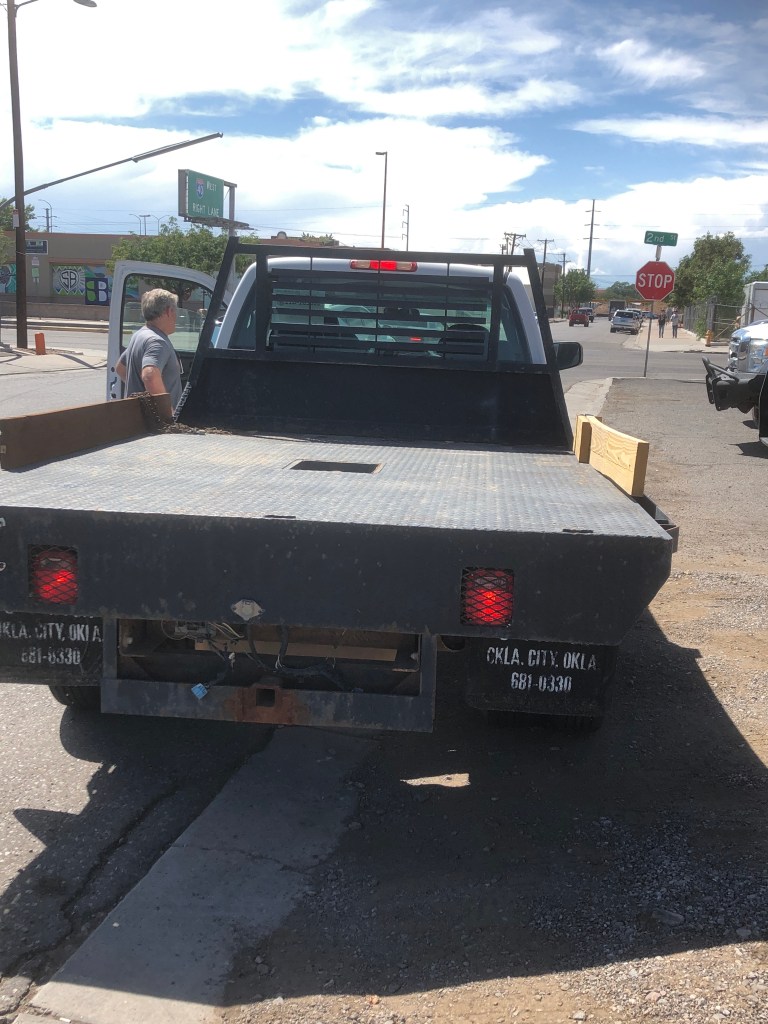 First we removed the headache rack.  That is the metal frame and grid that is just behind the cab.  It is designed to prevent a load from sliding forward and hitting you in the back of the head.  But it would be in the way of mounting a cabover camper.

Then we cleaned up the surface rust and repainted the entire bed and undercarriage of the truck.  And finally, we added a rubber mat to the flat deck to help prevent sliding of the upcoming camper.

Next, Mike drove to Colorado to purchase the camper.  We had been searching for a while, and came across an ad for an Alpenlite.  This is known to be a well-made, heavy duty camper.  And since heavy is in there, we had just the truck to handle it.  Here are the original ad photos.

The camper fit perfectly on the truck, and Fat Amy was ready to be modified for our needs.  The first step would be a tie down system.  Mike and Geneva did a lot of research  both online and anecdotally, to determine what to use. 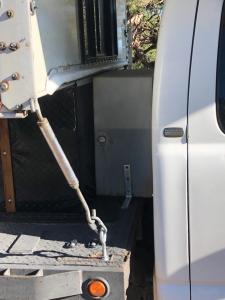 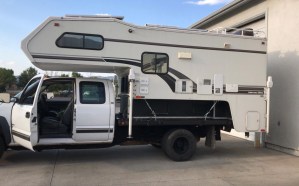 Then Mike developed a system of batteries, wiring and safe storage to support the ample solar panels on Fat Amy’s roof top.

The next feature that we knew we wanted would be secure, outside storage.  We utilize the storage boxes on the camper in South America every single day.  We did some shopping around and discovered that custom boxes were currently cost-prohibitive.  So we ordered some ready-made boxes that fit just perfectly. 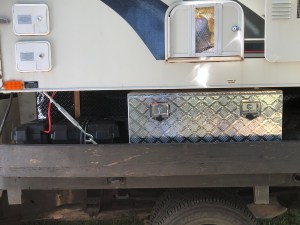 Fat Amy had features that made boondocking, off-grid camping and our mobile lifestyle very convenient.  We found that we could go many weeks without needing anything but fuel and water.  Dual propane tanks, a generator, the solar set up, a large three-way fridge and freezer combo, a large dining room and a queen bed all made Fat Amy the perfect nomadic home for slowcarfasthouse.

The extra cab, double door feature made a comfortable space for the dogs, extra storage and the driver and navigator. 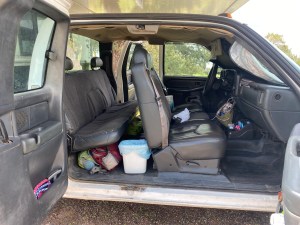 We took Fat Amy on her first camping test run up on Mingus Mountain in Arizona.  She did terrific.  While she is a big girl, she is capable and able to get us there in comfort. 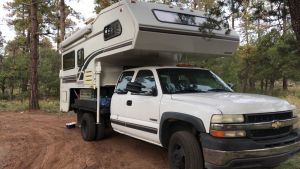 (This has been corrected thanks to a reader with whom we had previously discussed 💩 toilets!)

After that, there was no stopping us.  We prowled around the cities and back roads of Arizona and New Mexico.  We parked in the woods whenever possible.  And even connected to water and/or electric at the homes of the kids and our friends.

Move over, because Fat Amy is on the road! 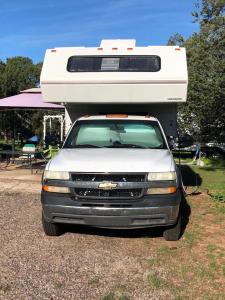