Again we followed the suggestions shared by others.  And they were right!  We came to see the buried church and enjoy the village.  And we did exactly that!

Angahuan is the nearest village to the Volcano Paracutín.  And in the 1940’s that volcano woke up and sent a few years worth of lava and ash flowing across the farmlands.  In doing so it wiped out an entire village, but left a partially exposed church.  We came to explore that a little further.  Here is a teaser photo of the church remains.  And at the end of the story I will share a photo of what the church looked like before the volcano began burying the valley in lava, fire and ash.

The first thing you should know about Angahuan is that as soon as you drive into town on one of the two roads in, a man on horseback will run alongside you.  These guys want to sell you a horseback ride to the volcano and the buried church.  Being on the back of a horse for more than 6 hours just to go look at a volcano fumorole did not appeal to me.  But we did schedule a 3 hour ride/hike to see the buried church.  Then we settled into our wooded campsite and explored the town.

Since we were way up in elevation, the air was crisp and the heavy cloud cover came in each evening.  We had decided to talk a walk in to the village.  And as we were headed back, it began to rain.  The cobblestone streets now became muddy, horse-poopy, puddled streets of yuck.  But the Purepecha women walked right through it in their multi-layered skirts and cheap shoes.

In the morning the rain had cleared and we saddled up our rental-ponies for a ride to the former location of the village of San Juan Parangaricutiro and the now famous church.

We were led by our local guide, José. 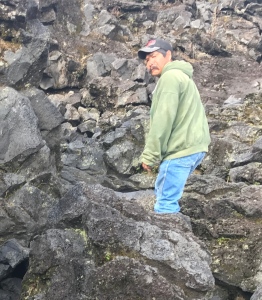 Riding the horses was a lot of fun, and certainly an easier way to cover the distance without Geneva’s foot hurting!  She even suggested that we should invest in a small donkey to haul along with us.  She could ride it around town wherever we go!

When we arrived to the edge of the lava flow we parked the horses in the shade and walked across the lava bed.  The church steeples are clearly visible.  Note that one steeple was never finished; it was not knocked off in the eruption. 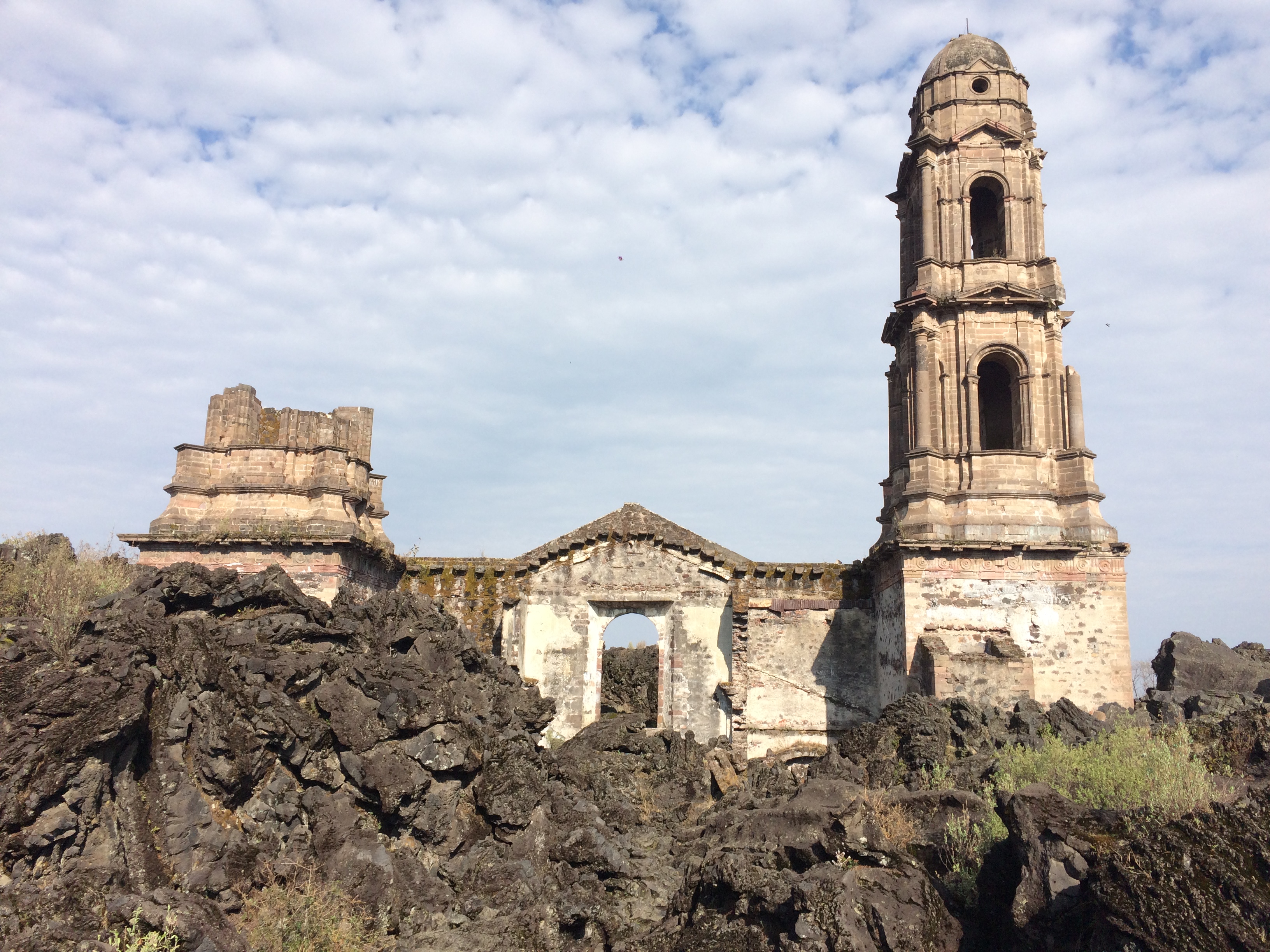 Walking around the site is very sobering and somewhat sad.  Although the villagers knew that the lava was coming, they truly lost everything in the flow.  Homes were burned and buried by the flowing stone.  People were evacuated to nearby cities and villages, and a new town was built.  But for many, this was the only place they had ever lived and nature was taking it away from them.  Not only were homes and businesses lost, but the fields would never be suitable for crops or grazing.  The entire area had become a hard, black, bed of lava.

One of the most startling aspects of the church is at that the nave is completely filled with lava.  But in two places, the lava flow seemed to have stopped.  The altar is one area that has been spared.  The lava flow is reduced to only about four feet deep as it slants towards the altar. The altar itself is still visible and somewhat accessible at the bottom of the chasm.  People celebrate here annually and often climb down the flows to leave offrendas at the remains of altar.

The other area that is celebrated as a miracle is the entrance.  At the front end of the nave the doorways are visible just under the steeples.  Although the wooden doors were burned up in the heat of the lava, the flows did not pass through the doorways.  The lava is as deep as the parapet walls on the church.  But the lava stopped at the doors, leaving a high ledge to walk along as we explored the site.   You can look below the ledges we are on, and see the depth of the lava below, and the light shining through the doorways where the lava stopped! 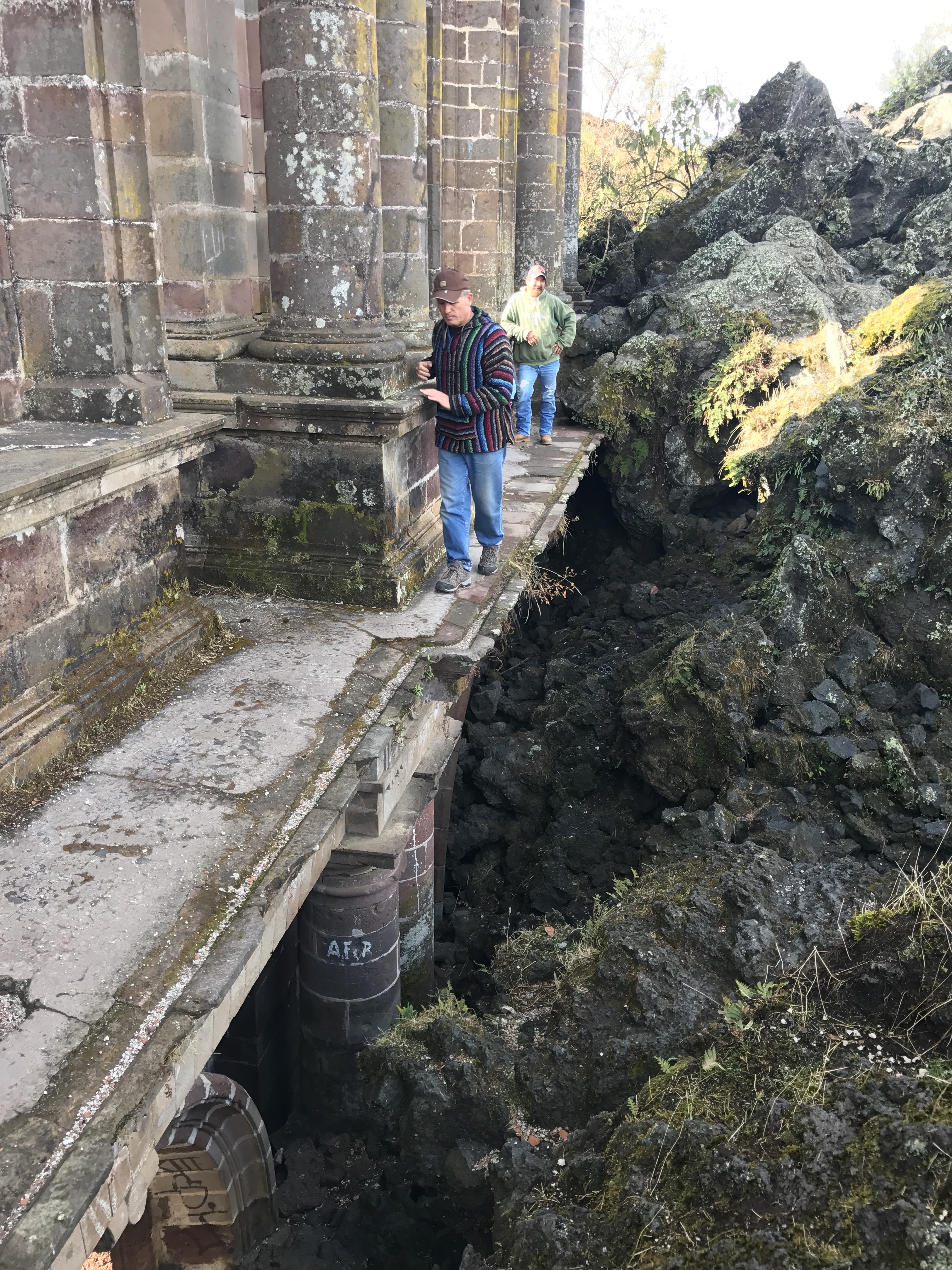 The windows that were once high up on the church, are now a perfect place to sit and pose for a cheesy photo.  In this picture we are sitting inside the frame of a huge window that would have been inaccessible before Paracutín began spewing lava and ash. (remember the “before” photo is at the end of this story) 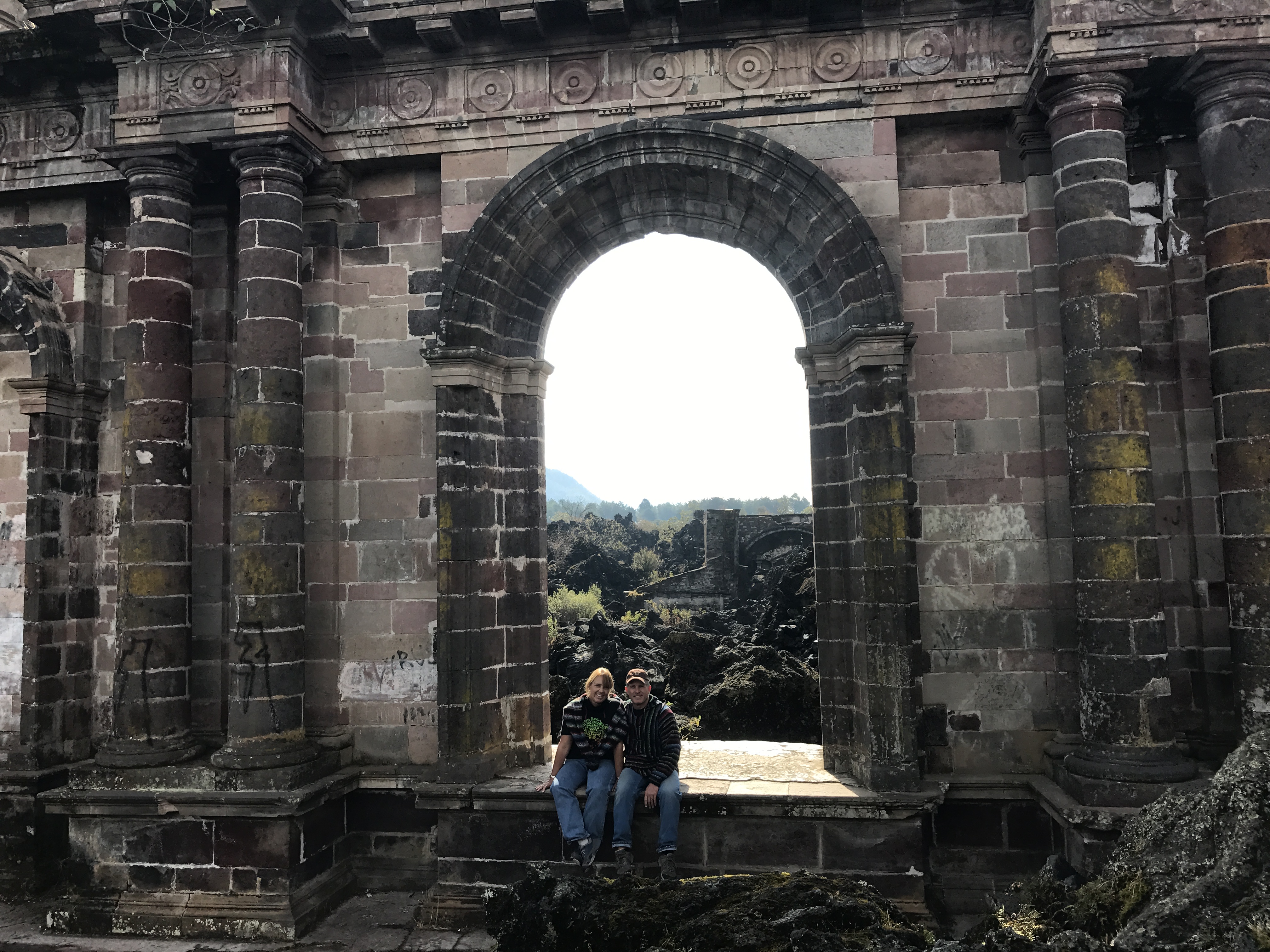 As we were walking along the ledges I realized that this view is the lower opening to the church bell tower.  Most churches here have two or three levels of bells. 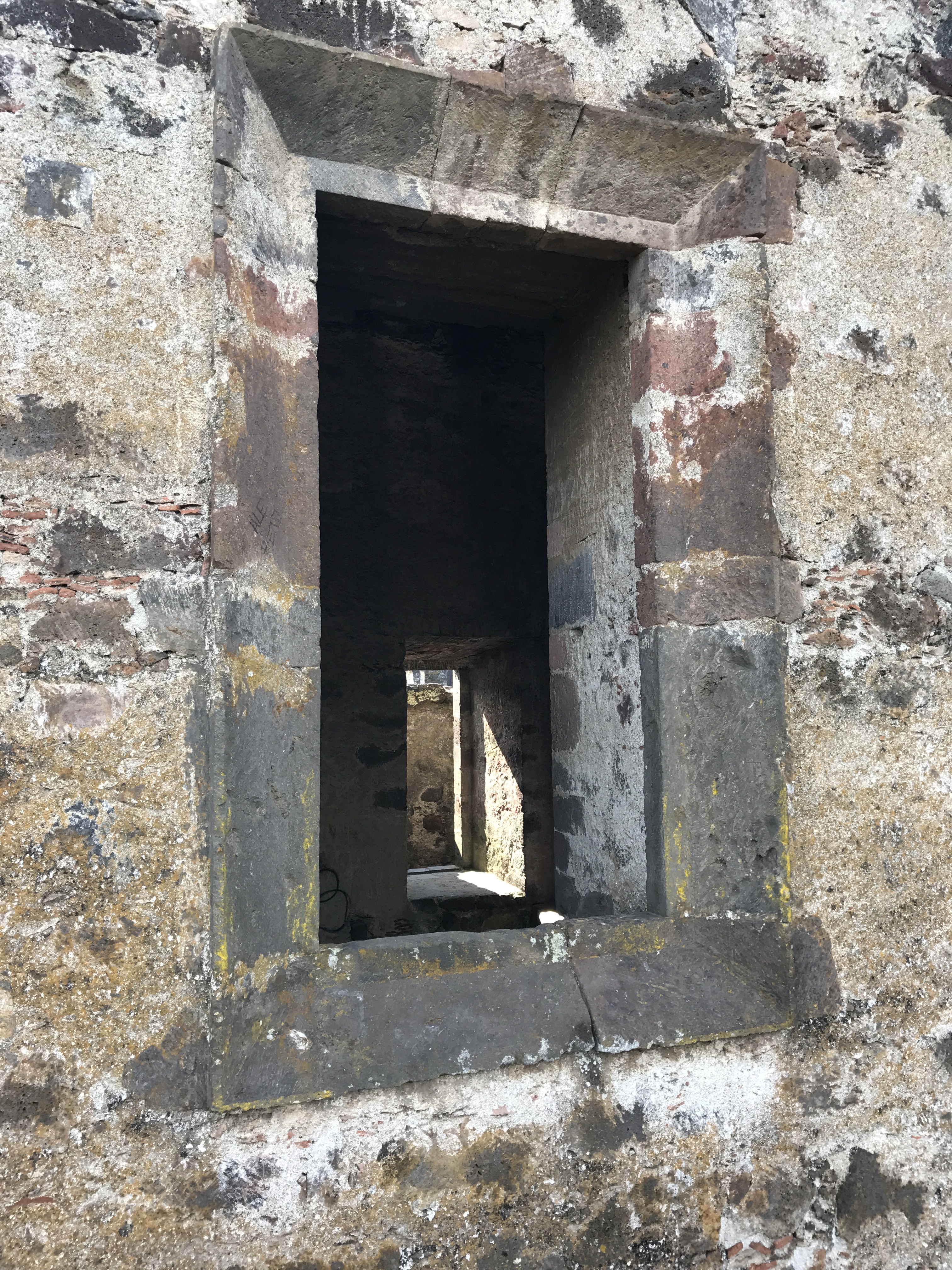 After walking around the site for a while, we had worked up an appetite.  José led us to the nearby vendors who had set up their dirt-floor restaurants.  We watched a woman prepare fresh blue-corn tortillas and proceed to fill them with delicious, hot fillings over an open fire.  Lunch was amazing!

After lunch we picked up our parked horses and posed for a few photos with the volcano in the background.

Just as we arrived back at camp the afternoon rains settled in.  This was a beautiful location to enjoy the trees and the swings.  We could even let the dogs roam around the woods. 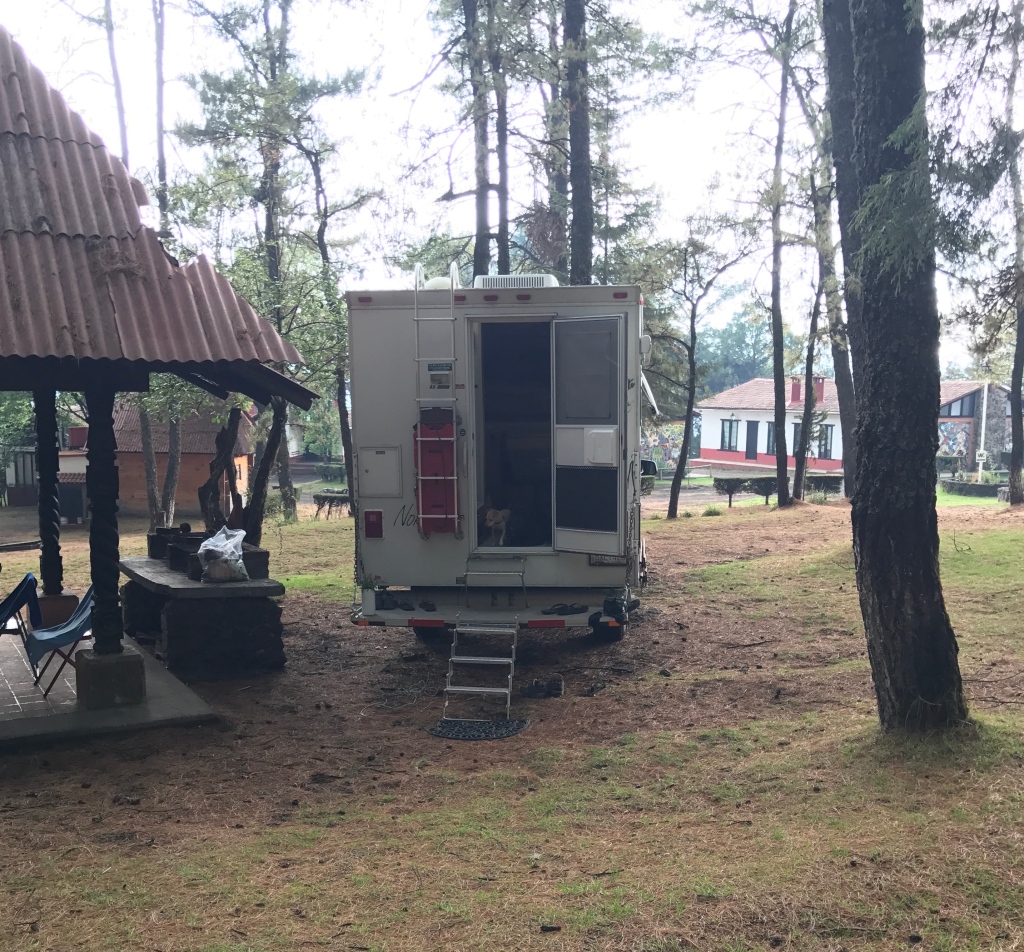 Even though he should have been hanging out at our campsite, Zeb quickly figured out where the food was located.  Here he is hanging out by the door to the dining hall! Look closely, he is camoflaged in the cobblestones and dark wood.

One entire afternoon was spent walking around the village.  Angahuan is a village that is still living in a traditional manner in many ways.  Most of the people in this village are indigenous people,  native Mexicans not descended from Spaniards.  In this region they are members of the Purépecha.  They speak a different language (in addition to Spanish) and they worship a different belief system (often in addition to Catholicism)  The language is spoken by over 200,000 people in this region of Mexico.  They told us that it is not taught in public schools, but rather at home and in small family groups.

The village is filled with contrasts between modern and traditional.  But this seems to flow smoothly in this very old setting.  Scroll through these photos and look for the signs of stark contrast between old and new, modern and traditional, Purépecha and Mexican and even young and old.  (And remember at the end there will be a photo of the original church!) 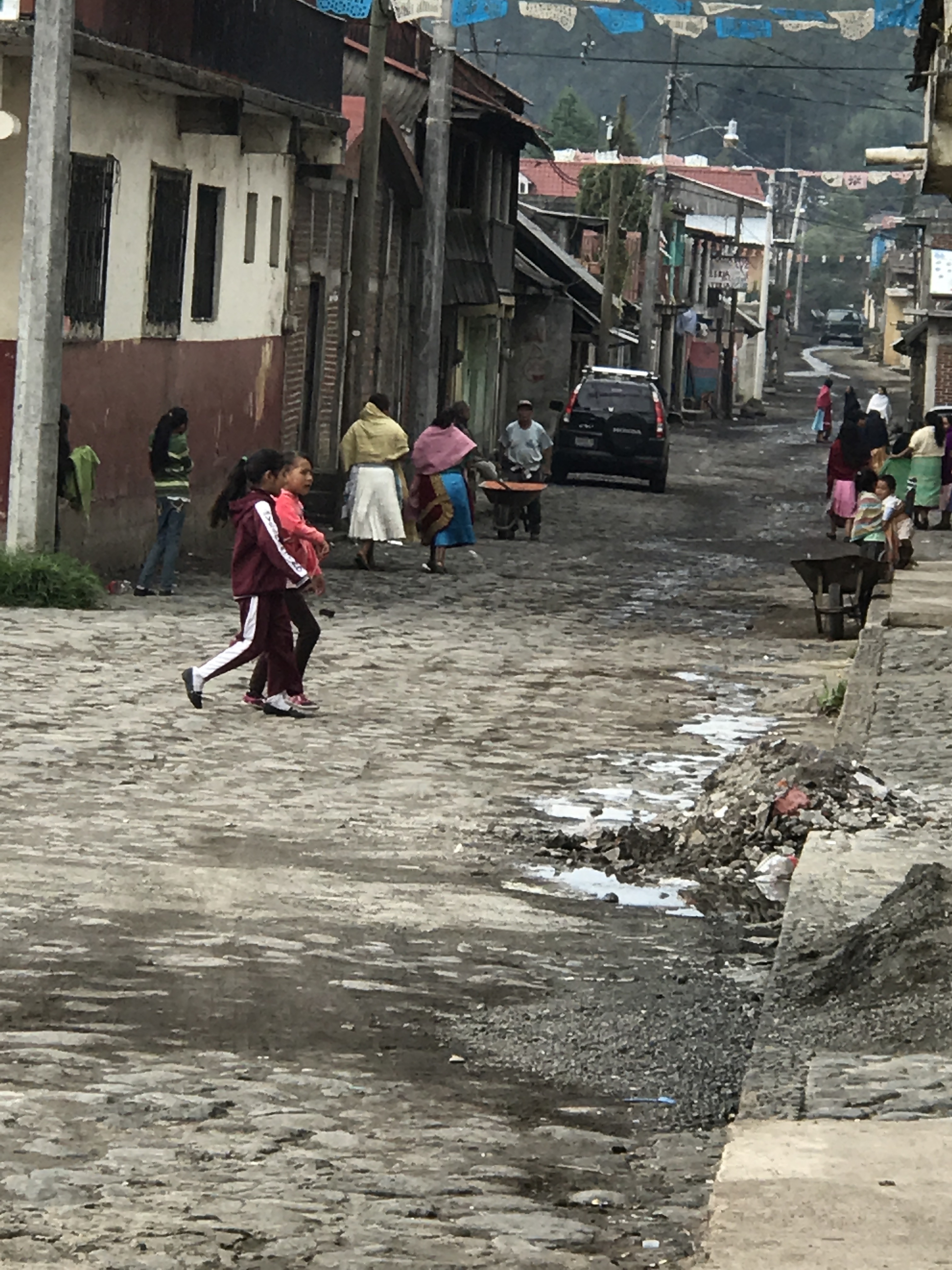 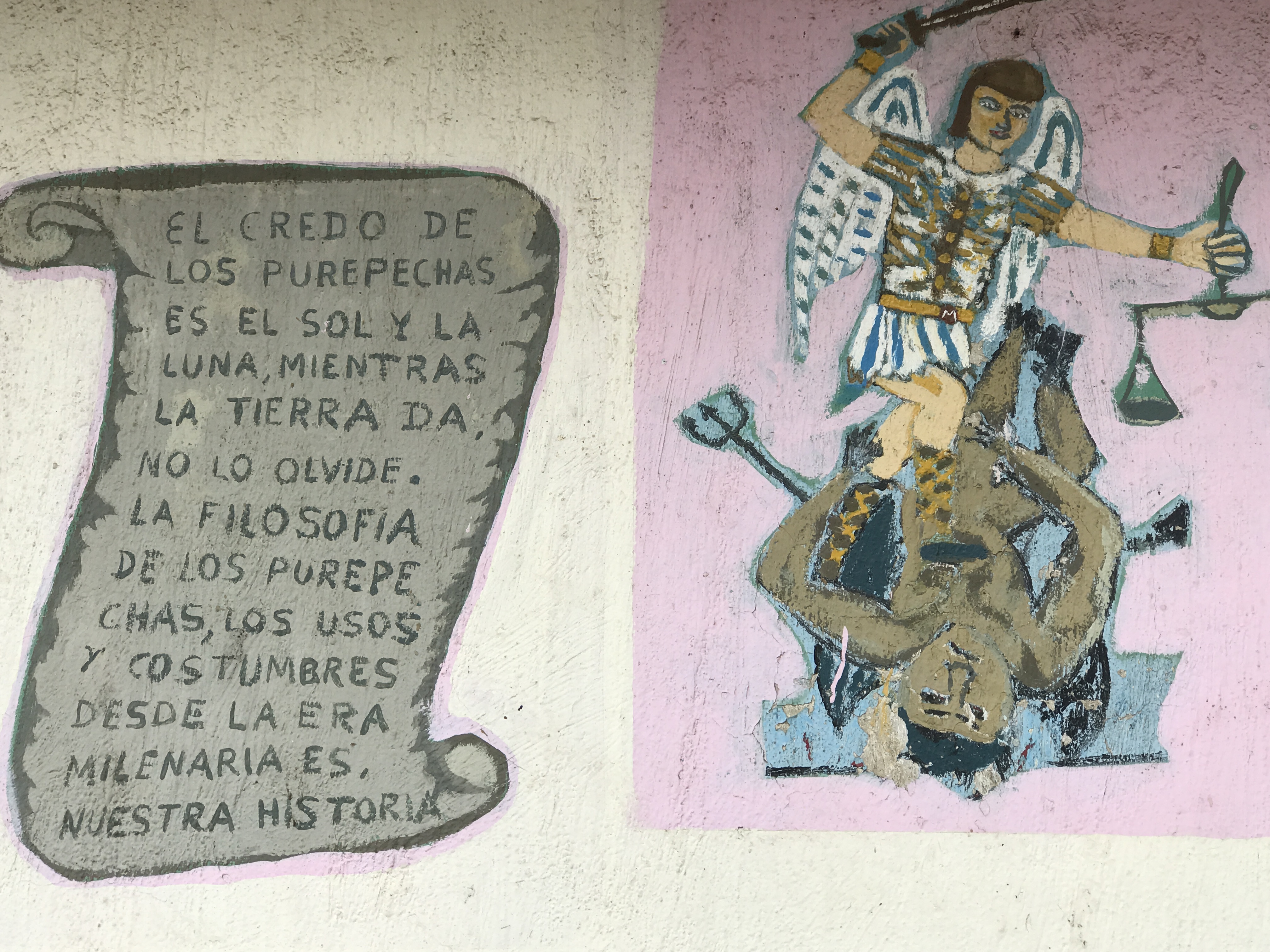 This village was very enjoyable, friendly and comfortable.  We laughed our way through the horseback riding, strolled around the village, learned about a new culture, donated a soccer ball to the school and generally had a good time.  Thanks for exploring it with us, and remember to keep laughing……

Here is our panoramic photo of the lava and the church as it looks now.  And below it is the photo of the church that was taken just as the ash and lava began to flow out of Paracutín in 1943. 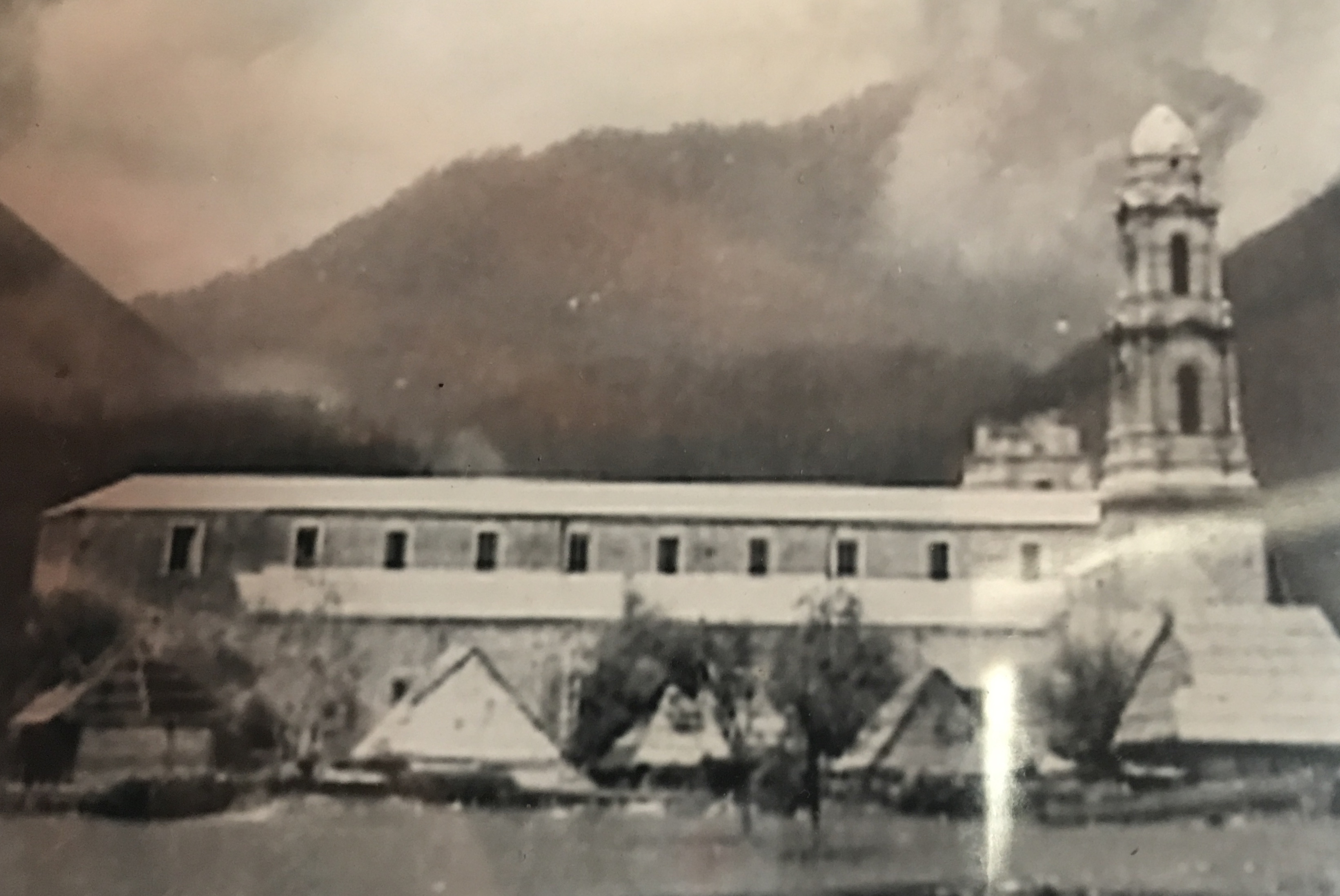 As you look at this photo, consider the photos I shared of the bell tower, the entrance doors, the altar and the steeples (complete and incomplete)  This really puts the depth of the lava into a perspective!

Thanks for following along.  Remember to share your suggestions, like our posts and feel free to send this to someone you know who may be interested!

4 responses to “Angahuan and the buried church!”

Time for some@weekend reading! Two new blog posts are up on our website. Go to https://slowcarfasthouse.com/2021/04/01/doing-stuff-while-stuck-in-brazil/ or search for slowcarfasthouse to see some photos and read stuff about Brazil (and Uruguay) #truckcamper #truckcamping #pandemicstuck #overlander #canela #brazil