It was beginning to feel as if we had spent a lot of time in Costa Rica! Perhaps because we did!  We arrived in April for the house sitting job (opens new window) and we stayed until July.  During our time we explored the country, lived in a jungle cabin, we said goodbye to a dog, we had a visit from family members, we traveled to the Panama Canal and now we had one more visitor to wait for.  Then we would check out of Costa Rica.

While we waited for the friend to arrive in Costa Rica, we took care of several projects and some business.  It began with a well-done tire rotation, balance and laser alignment at a truck shop near the Caribbean coast. 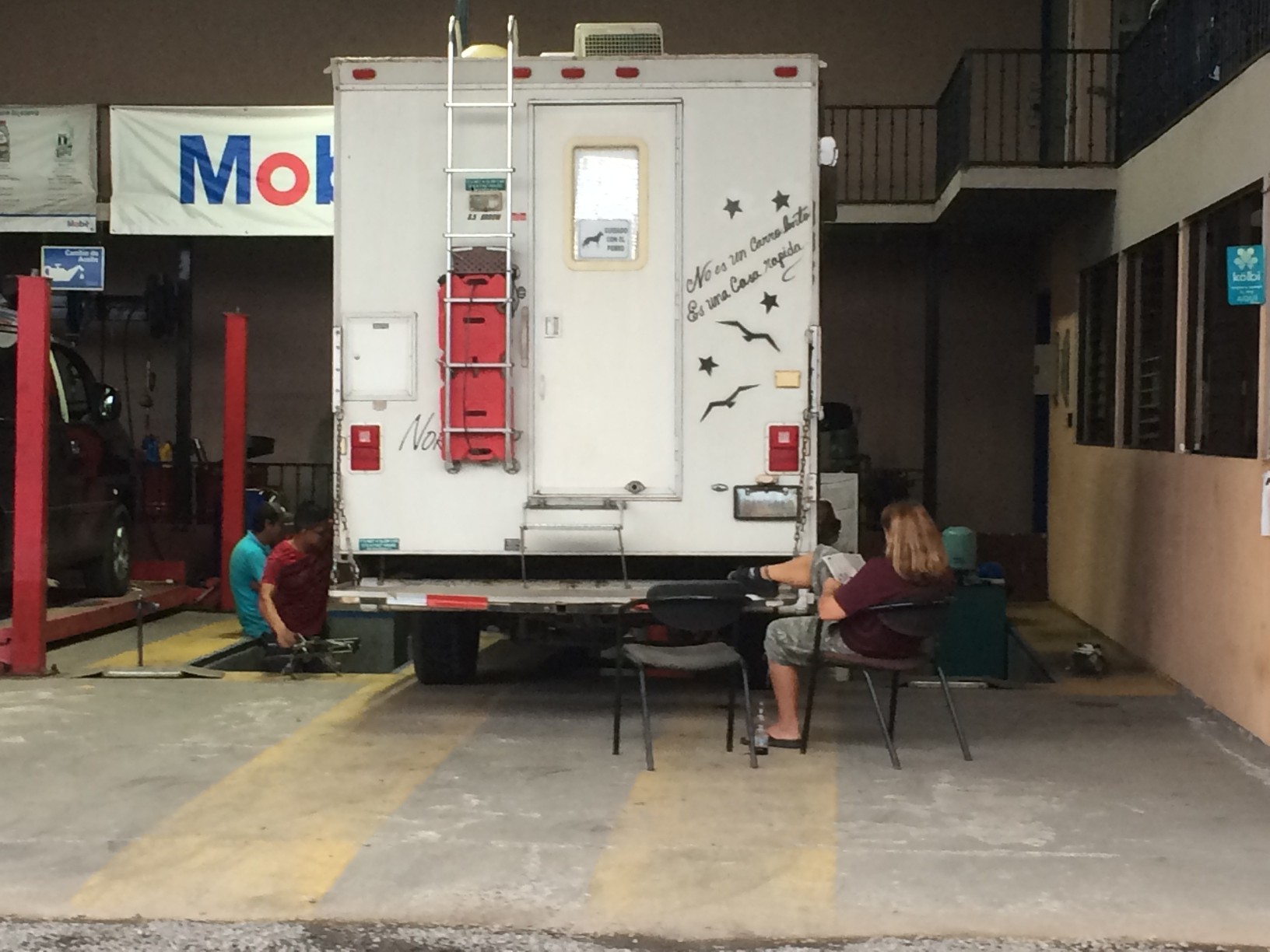 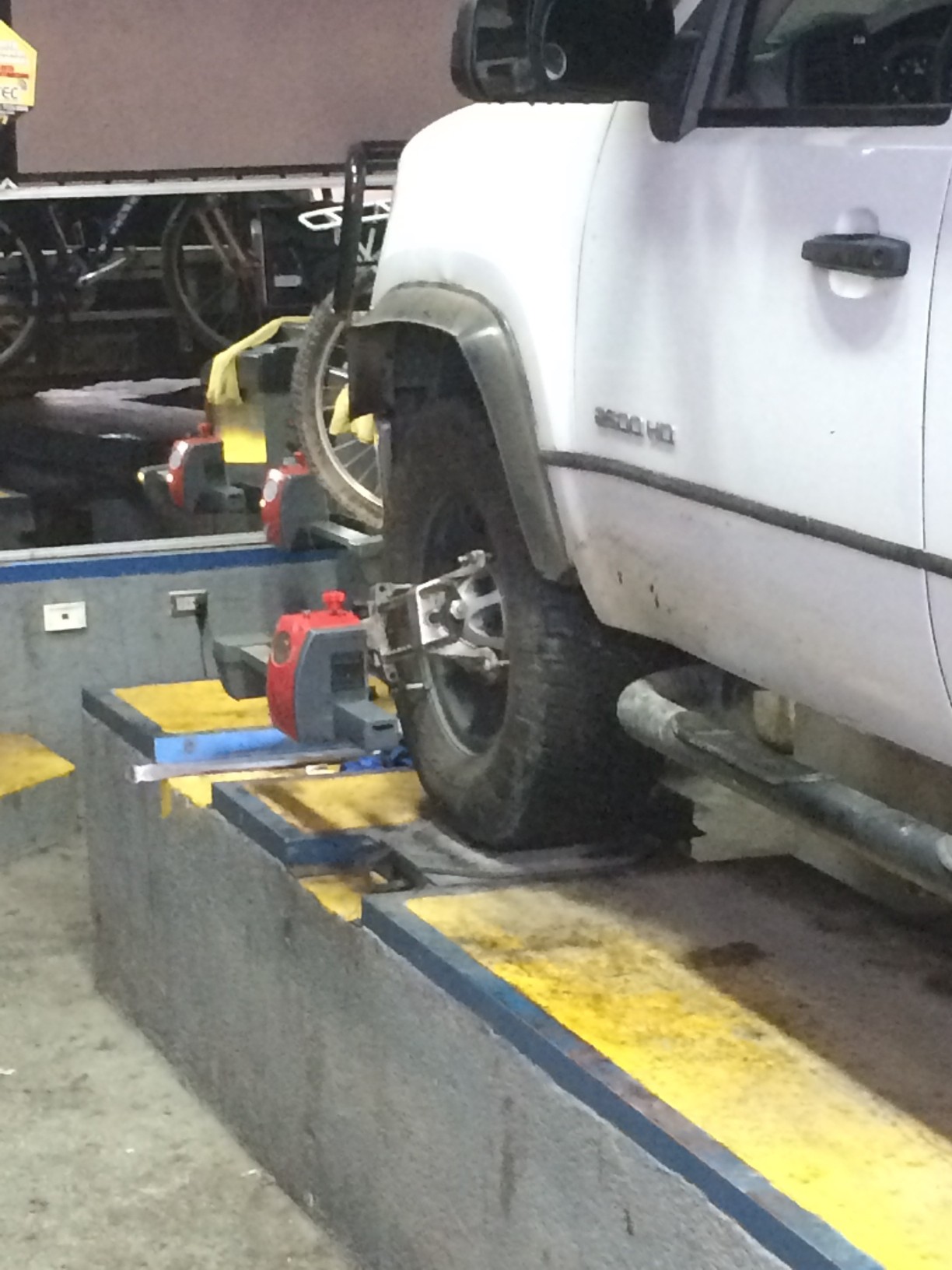 Then we went to visit a veterinarian in Tamarindo who had been highly recommended.  Tranquila Vet is run by a young, American woman who is establishing a practice (and a wonderful family) in that area.  We camped at her temporary office (the white box) while she ran some tests on Nica. 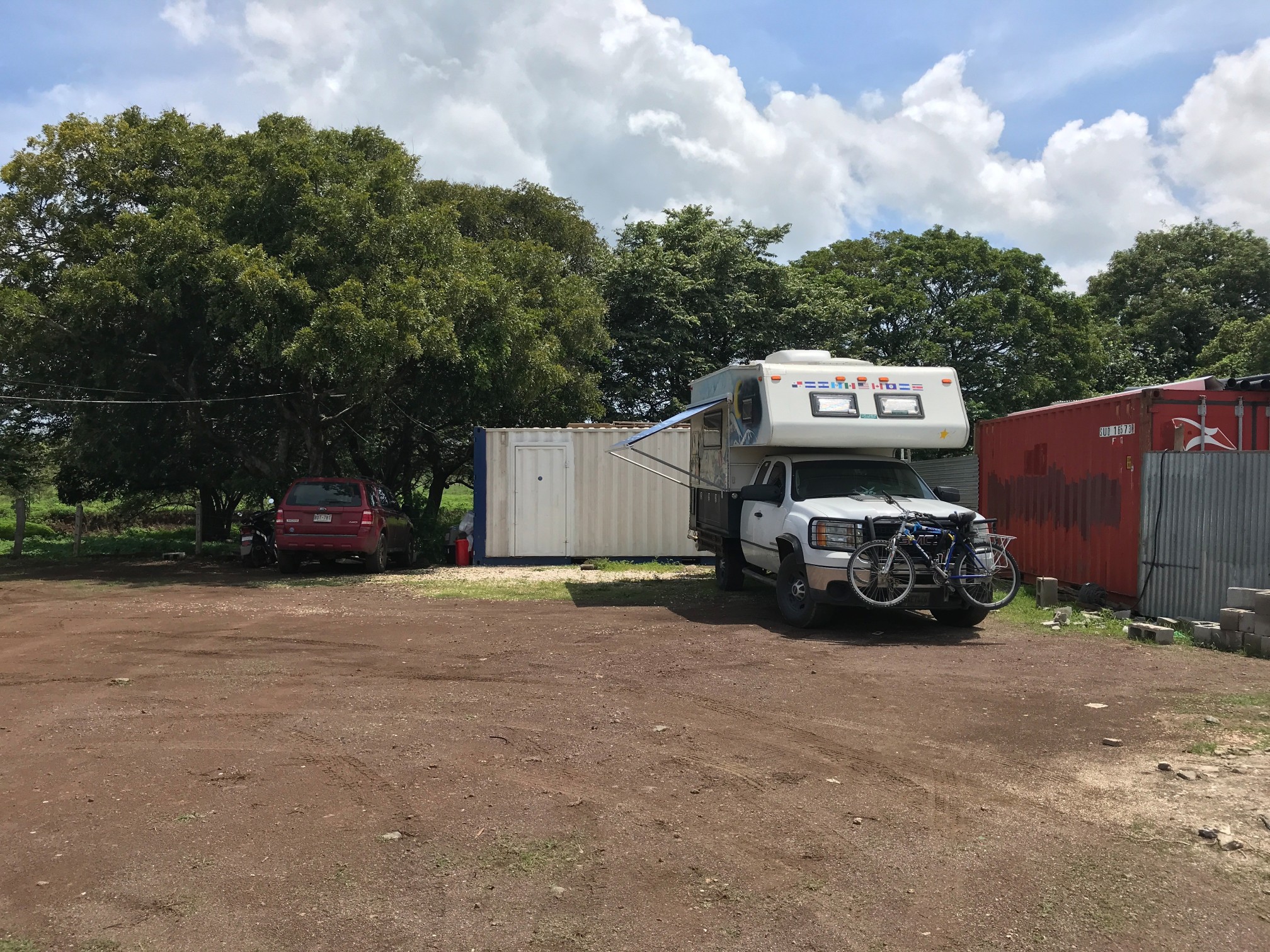 When the construction dust clears, she will have a beautiful office!   It was very hot there, and we spent most of the time with the air conditioner running and Nica tucked away in the camper.  So when she needed to play, she became wild inside the camper and raced around on the couch and the bed!  Here is her “wild-eyed” chaos look!

We checked on events in the Tamarindo area and located a night of bingo at one of the local restaurants.  We went out for dinner and joined in on bingo.  It was fun to hang out with the expats and play bingo.  Geneva even won $5.00 on one of the games!

One of the nights in Tamarindo we found a wonderful beachfront site to park for the night.  The ocean breeze felt good, and Nica and Mike managed to track in lots of sand on their feet! It was a perfect beach trip!

Just as we were wrapping things up there, we received a contact from the man we house sat for in Leon, Nicaragua.  (link to story about house sitting in Leon) Since our visit there, things had become dangerously violent in the country.  The city near his house was no longer safe.  The Nicaraguan civil war was escalating and he had decided to evacuate with his dog.  He had arranged safe transport to the border between Nicaragua and Costa Rica, but needed a ride to a new rental home.   We were happy to offer to go pick them up.

It was a fun trip and we loved seeing Mark and Martin again.  (if you are not seeing news about the tragedies in Nicaragua, research it – it is heartbreaking)   We camped for one night on a street near their new home.

The next morning we said goodbye again to Mark and Martin.  Then continued with our second exploration of Costa Rica. We were ready to get back to the cooler mountain weather. 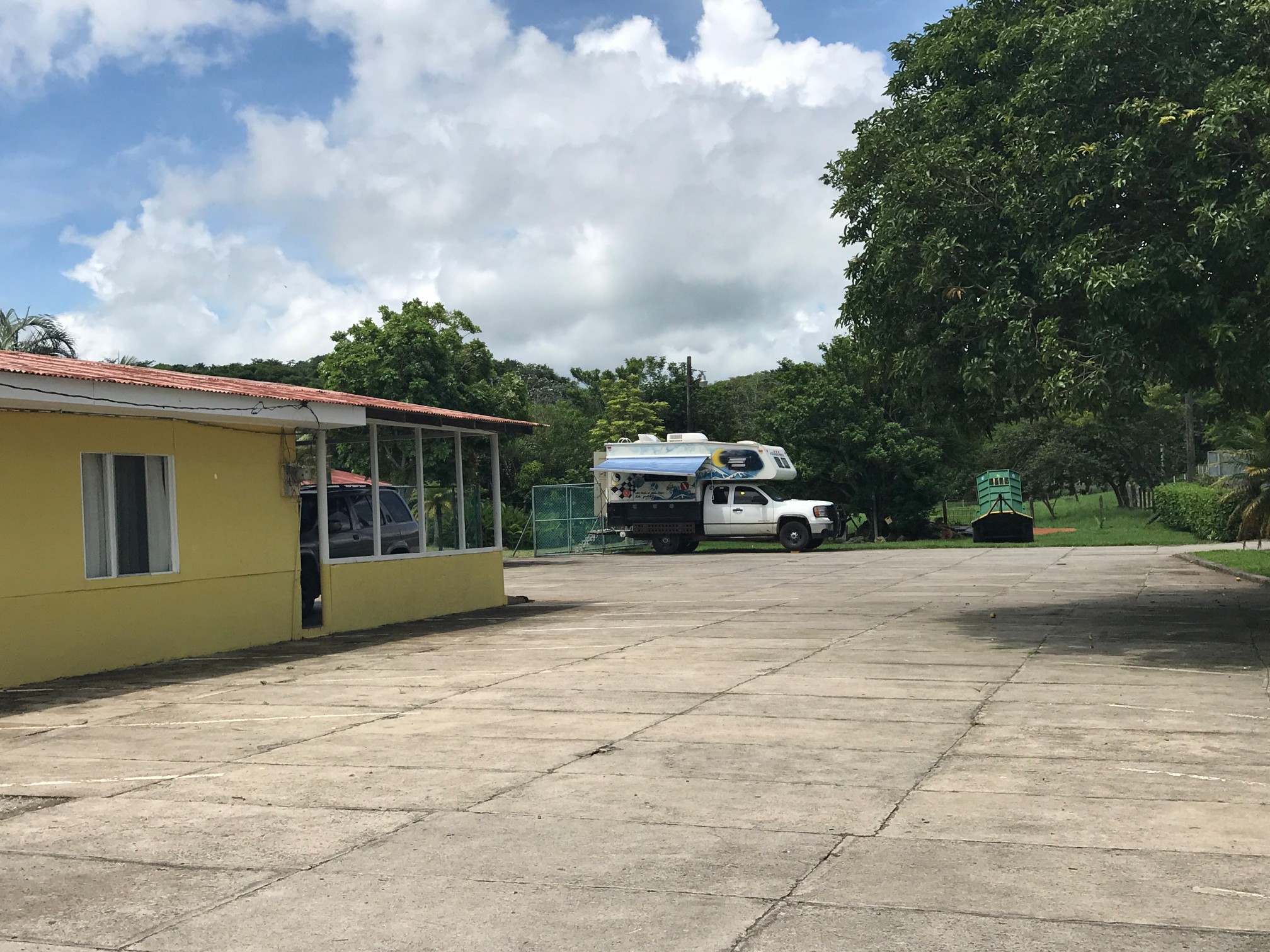 It was lovely and relaxing.  While there we got caught up in World Cup fever.  We posted a grid of the playoff games in the camper.  Mike tracked the results carefully.  We even had a soccer ball tortilla served with our breakfast!

One afternoon in the mountains we were walking the dog down a dirt road surrounded by pastureland.  The clouds cleared away from the volcano just as the sun was setting.  The colors became vivid and we took this incredible photo.  I hope you think it is as magical as we do! 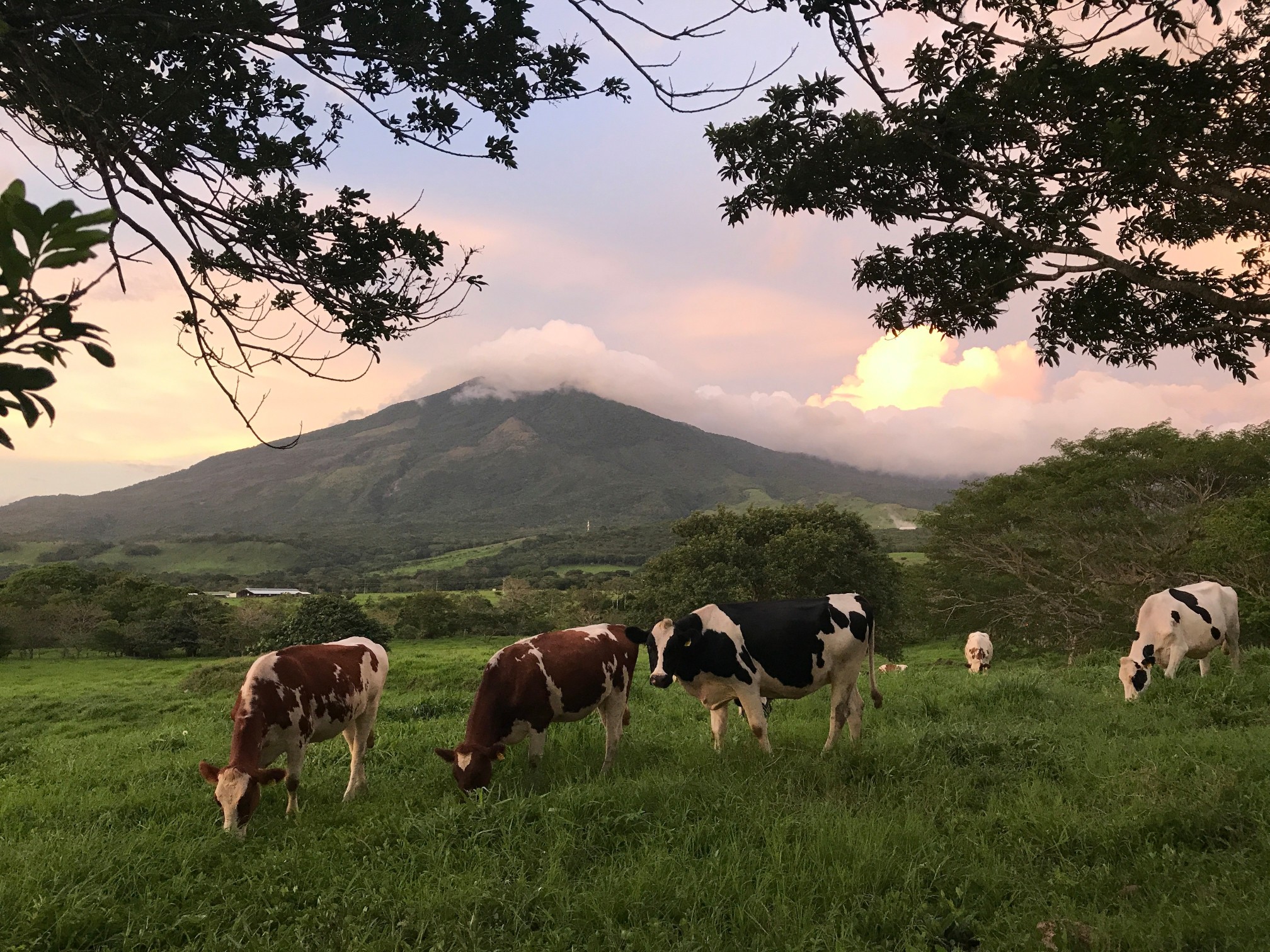 From there we continued into the mountains, bound for our favorite place in Costa Rica. We parked on the edge of the jungle covered, rolling hills above Rio Celeste. 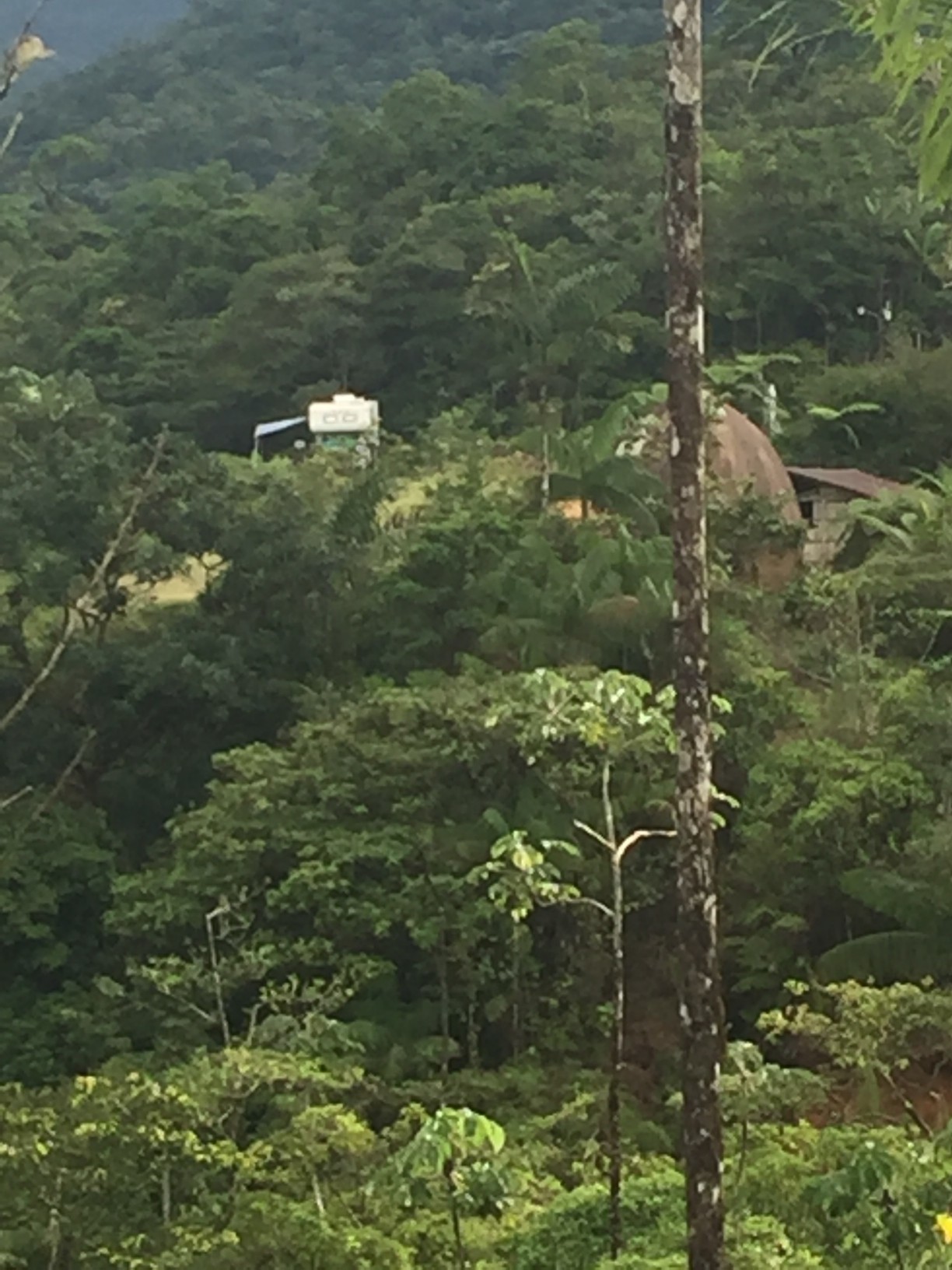 The blue waters of Rio Celeste had drawn us back.  And while we were there Nica taught us that she likes to chase sticks and will even swim to fetch them! She is quite enthusiastic about stick-chasing.  We just need to work on the stick-returning portion of the game.  She generally drops them just out of reach or hides them in some bushes! 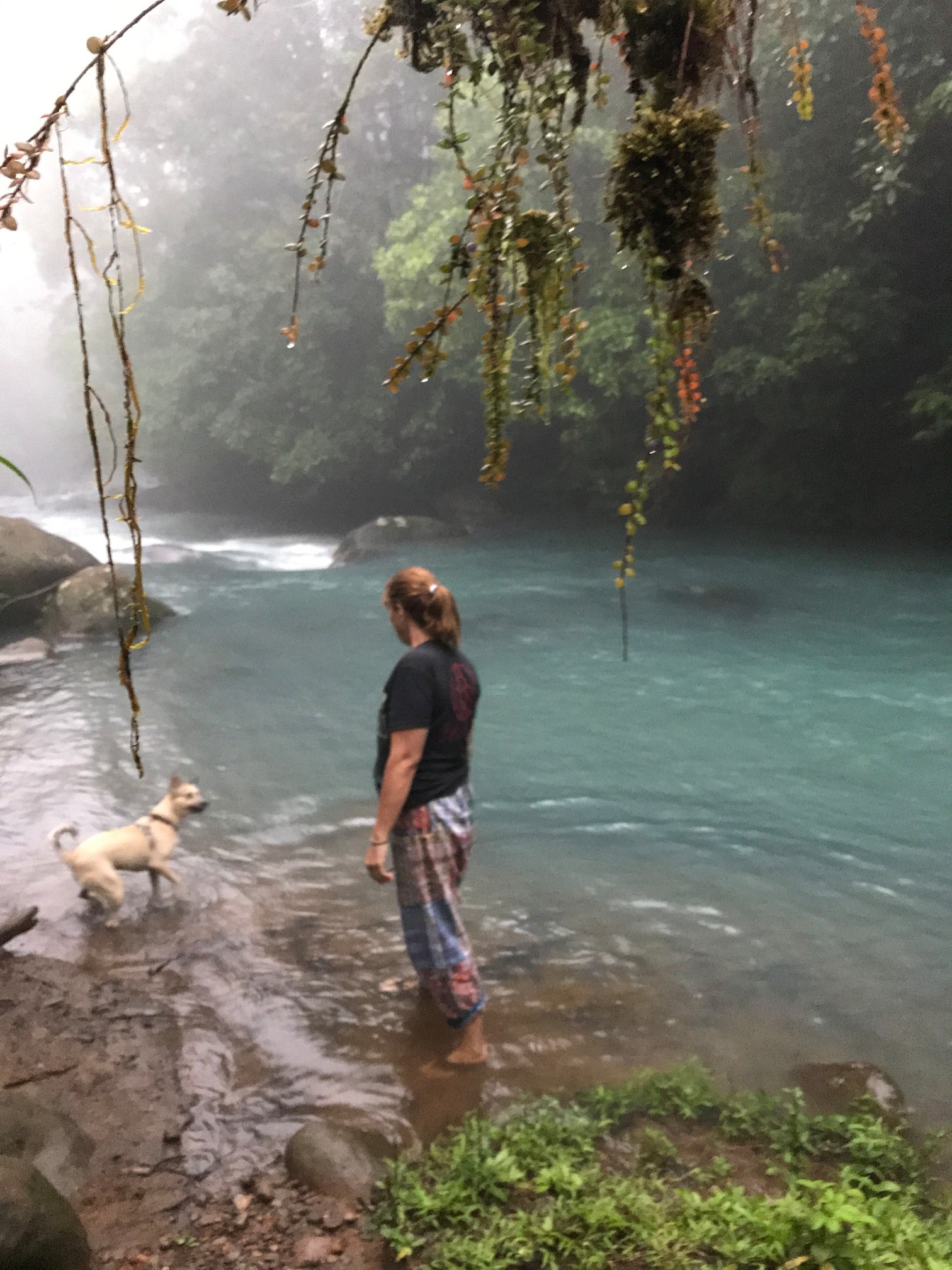 We spent a few days just chilling in the jungle, walking to the river and sitting under the awning during the daily afternoon rains.  We read a few books, ate plenty of cheese and crackers, and worked on a few little projects.  We really like Rio Celeste! 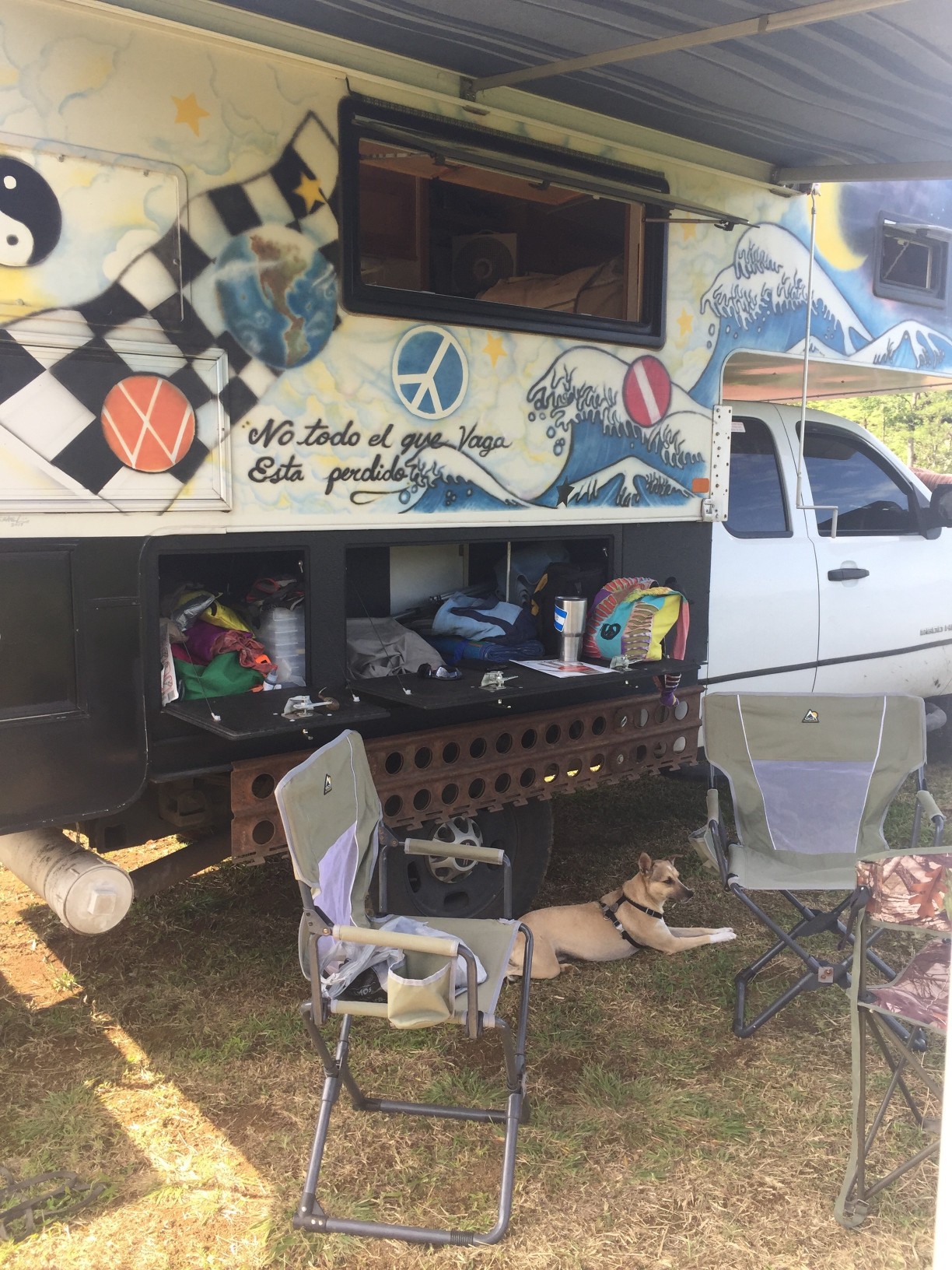 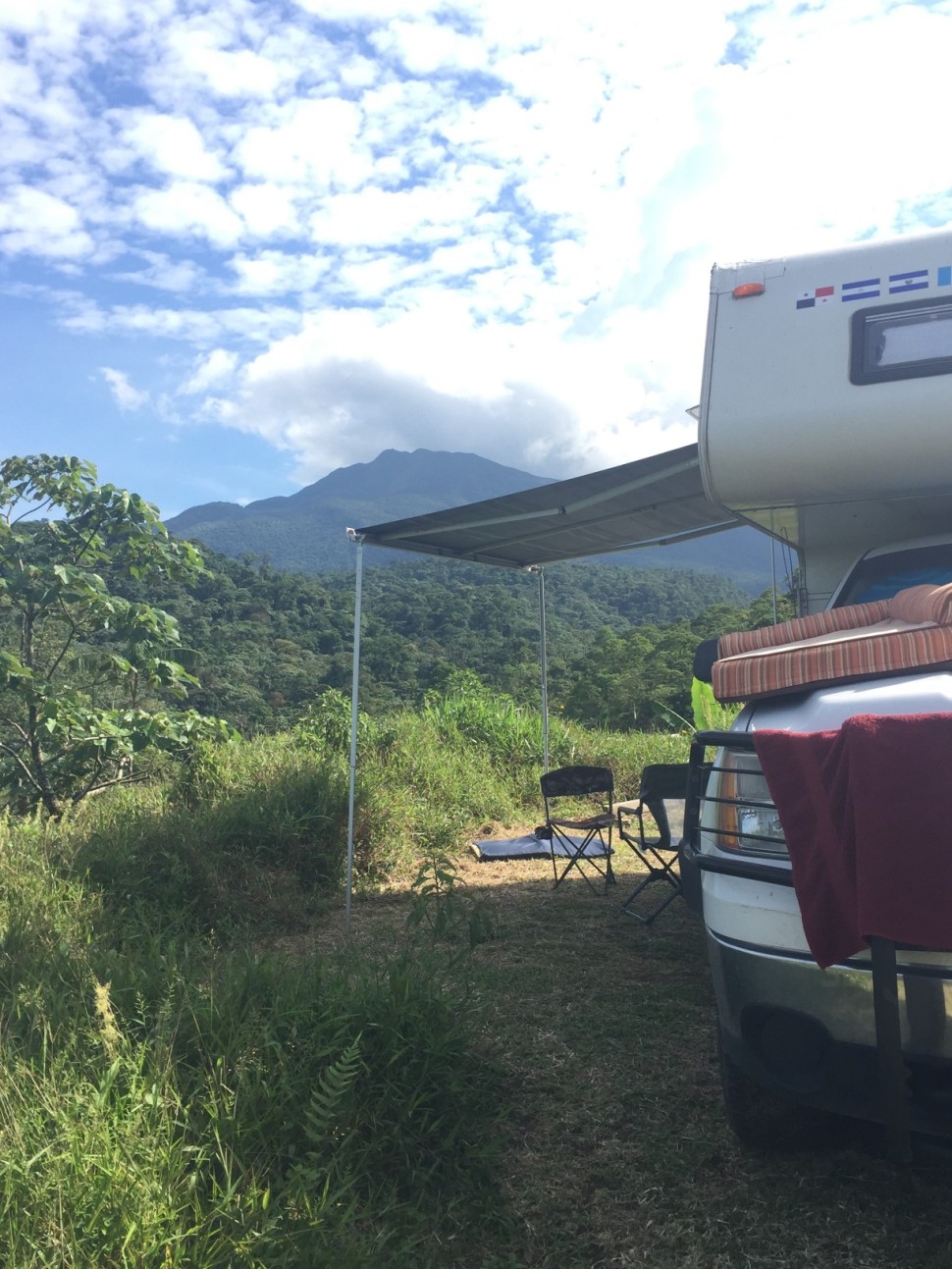 Back on the highways of Costa Rica we would return to the big city of San Jose to meet up with friends and take care of some business.

We covered a lot of the highways, towns and sites while we were in Costa Rica.  The blue lines represent the routes we drove during our months in Costa Rica.  But the fun wasn’t over yet!  We were about to explore San Jose some more!

We squeezed back in to the parking lot of our favorite hostel, Finca Escalante and soon several other travelers arrived.  While this isn’t the most glamorous parking place, it is functional, in a great neighborhood and a good place to hang out.

It was fun to visit with the other travelers and share stories, ideas and suggestions. 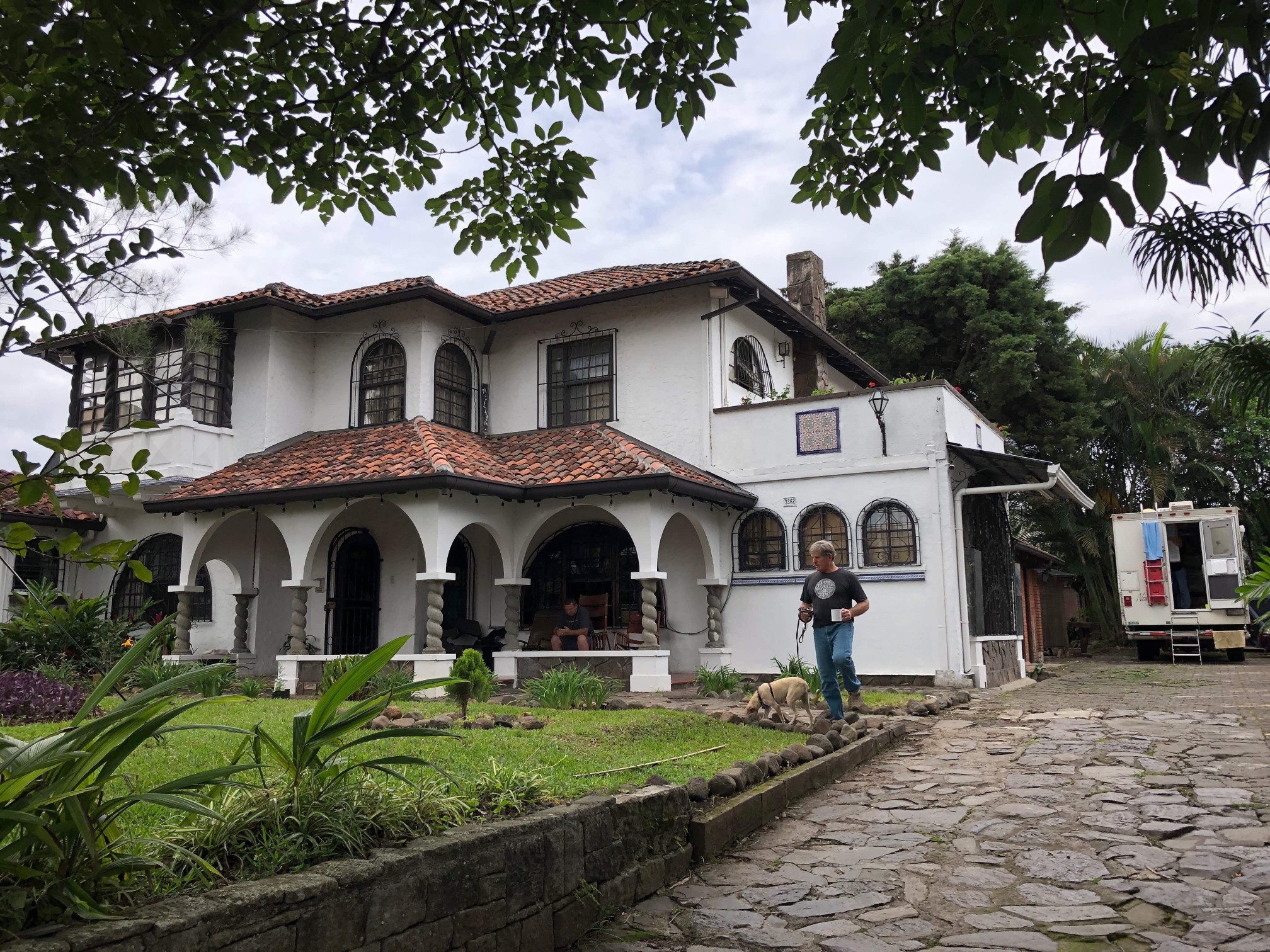 With a little free time on our hands, we visited the gold museum of San Jose. This museum is a collection of thousands of gold artifacts that were found the few archeological areas of Costa Rica.  It explains why there were no museums at the archeological sites we visited…….. all the good stuff is in this museum!

Of course, while we were out exploring the city we looked at a few interesting things.  Like this area that was clearly designated as a public space, yet it is located in between four lanes of traffic.  No one was there when we passed by!

And while we were out we spotted some graffiti that needed some googly eyes added to it.  Some of you have followed my ever-expanding collection of googly eye photos.  Its been fun to glue on the decorations to artwork across the various countries. 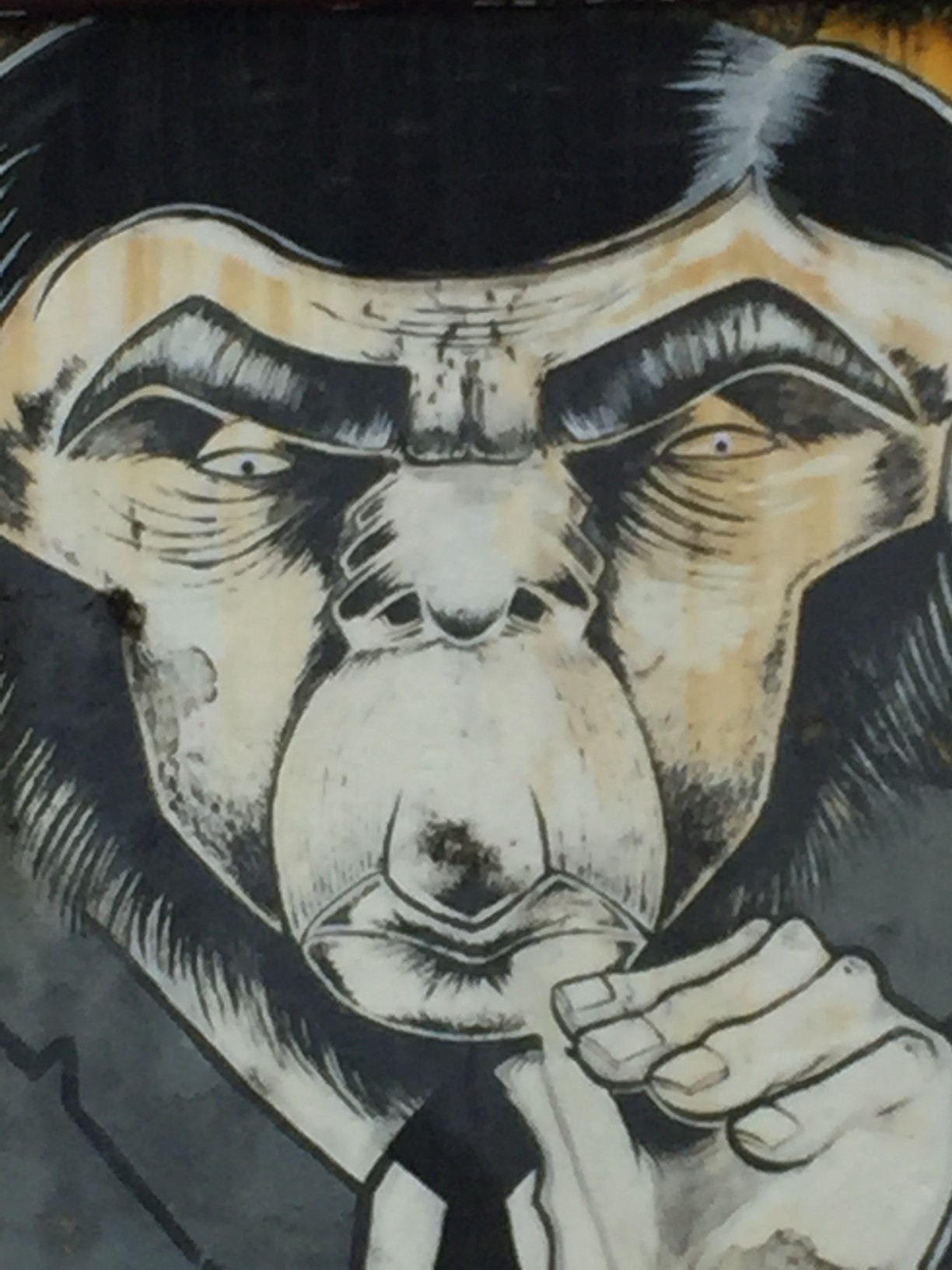 Not all graffiti is attractive or worthy of googly eyes.  We found this particular graffiti to be sloppy and poorly executed, yet it carries a strong message.  The statue is Christopher Columbus.  The message underneath basically says “In 1502 I pirated the people” as it refers to the Spanish landing in this area and enslaving the indigenous people and claiming the land.

While we were in the city of San Jose we also had the opportunity to visit with our friend, Emily from Arizona that has been attending summer Spanish classes in Costa Rica. We attended a program at the university so we could hear her speech. She is such a wonderful kid, I am proud to have known her since her first breath in this world!

We also found another opportunity to play bingo!  This time it was in a casino in downtown San Jose. We elbowed our way in to a very crowded room and were quickly taught the ways of the game by the woman beside us.  Before the evening ended, she had won a coffee maker and we won nothing.  But it was fun to learn a new style of playing bingo! 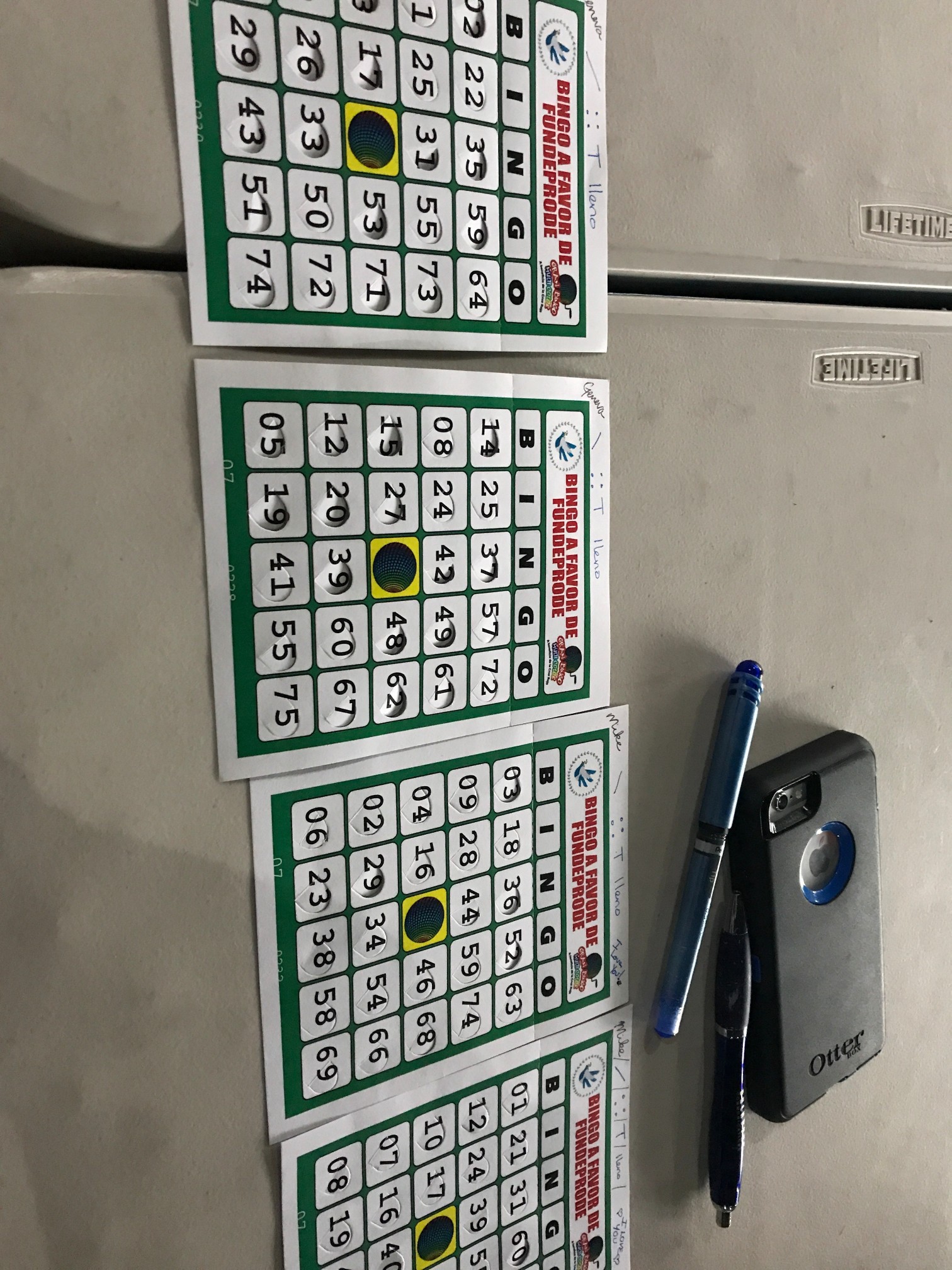 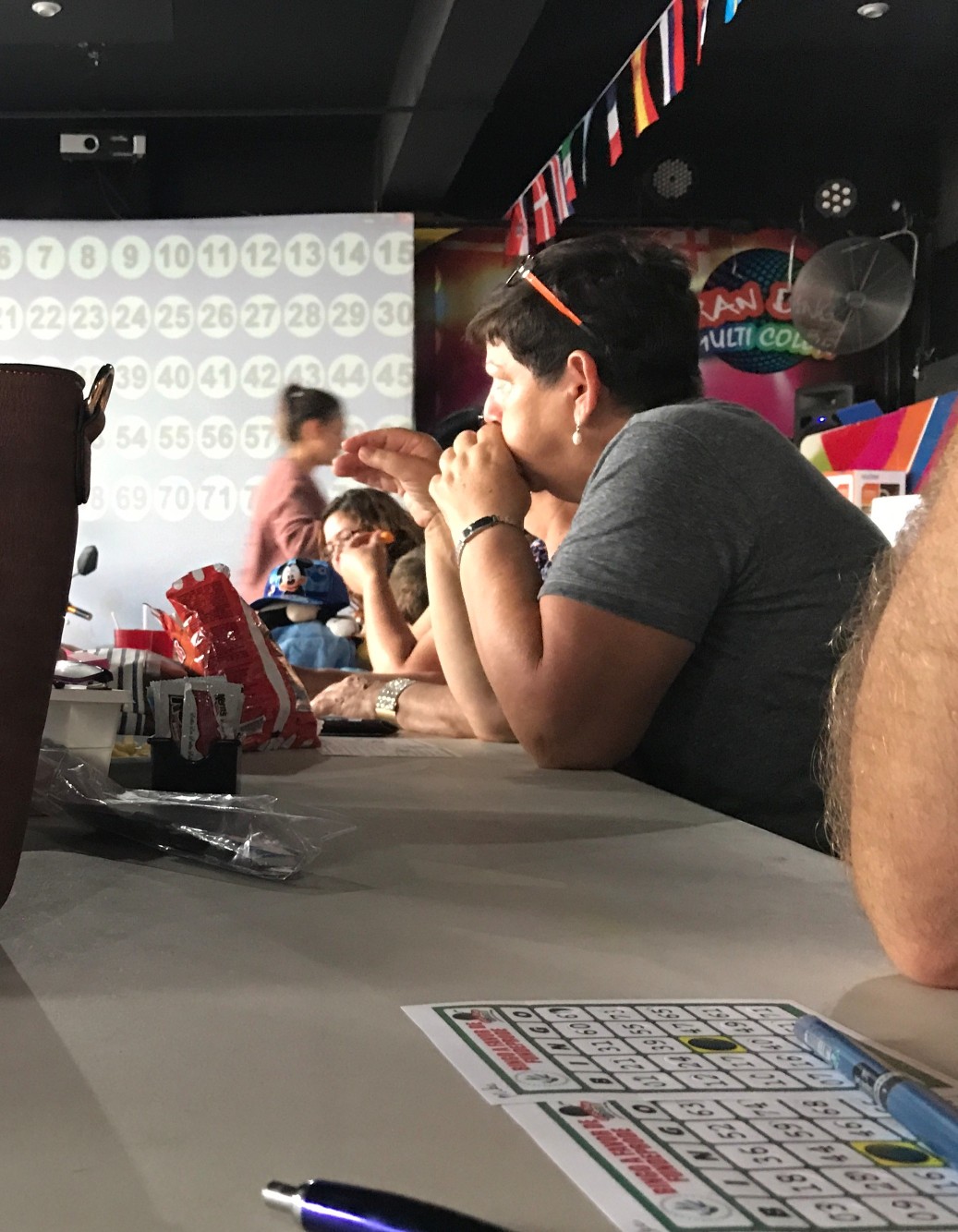 The next thing that happened was sort of funny and embarrassing.  We were contacted by a local television station.  They were interested in doing a feature story on us and our travels.  So they came to the hostel with a cameraman and the host of a nightly information show spent a few hours talking to us.  Our show was aired about a week later and we are still giggling over our terrible Spanish and silly moves during the interview.  But it was an opportunity to treasure, as so much of this trip has been! 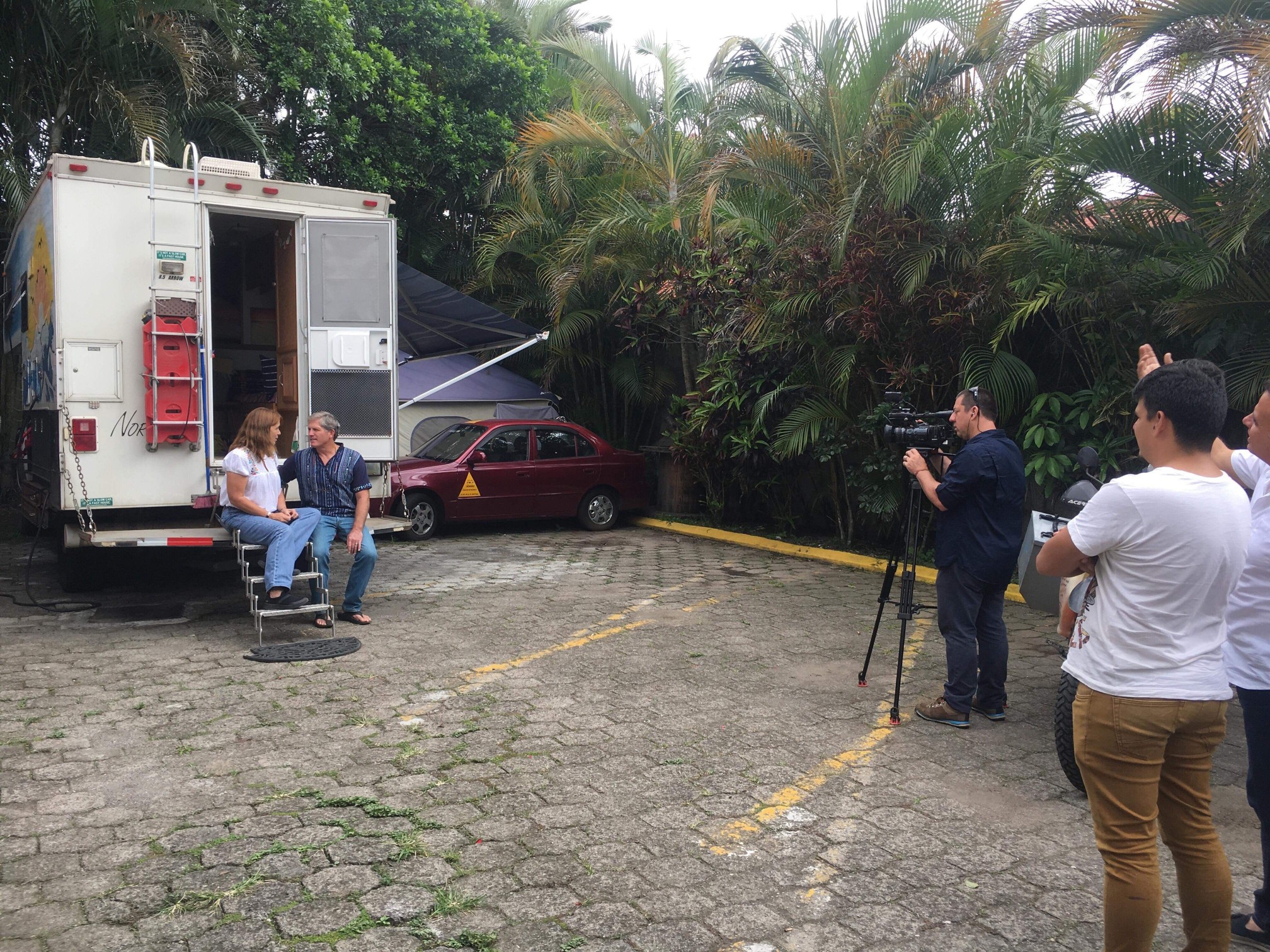 And then….. our friend showed up!  When Beth arrived we were so excited to hang out for a few days and share some Costa Rica fun with her. We relaxed on the porch at Finca Escalante, we ate good food in the neighborhood restaurants and we cherished the time together with her two daughters.

Even Nica got into the hanging out action at the hostel.

While the ladies were hanging out and having fun, Mike was working.  Beth had brought materials from the USA to complete a few projects on the camper.  So Mike resealed the storage boxes and replaced the shower floor pan.

And when the brief visit was ending, and the camper repairs were finished………. it was time for us to exit Costa Rica before our permits expired.  So we made a beeline for the border.  Along the way we took a few more cool photos to share with you.

And that is it for Costa Rica.  Next up we make another trip around Panama as we prepare for shipping to Colombia.  We will explain all that in the next post.  In the meantime, if you want to read more please check out the search bar on our home page.  And feel free to send us a note if you have questions or comments.  We do love hearing from our readers.

2 responses to “Costa Rica- our final activities and fun!”