We were able to wrap up business and pleasure in the Verde Valley within good time. The weather was amazing for us, while we were there which allowed us to get a lot of work done. This visit had some highs and lows, losses and gains along the scale of human relationships.  Of special note was the opportunity to spend time with my sister, Jessica.  Saying good-bye was a little more difficult this time.

We did not go far on the first run. But it was a great stopover at Billy Sheppard’s place. He took some video of us (see it on our Facebook page https://www.facebook.com/slowcarfasthouse) and a few photos of the van. And his mom made us a delicious peach cobbler which was perfect for breakfast TWICE!! (The servings were enough for leftovers) Billy runs a YouTube channel with some cool videos (https://www.youtube.com/channel/UC2l8nj943mjUnSm3jCMtRlQ) and a Facebook page that chronicles his travels and the people he meets  https://www.facebook.com/pages/VW-Vanagon-Westfalia-Travels/1451832385069936 .  We hope to see him on the road again later, and if you happen to meet up with him—stop and say hello!

As we ran through the outskirts of Phoenix we stopped to get the tires balanced. 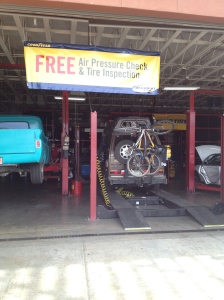 I cannot stand driving when the front tires are wobbling- as it makes my bingo wings flap!

Now that the steering wheel is more friendly, Mike let me drive while he and Mango cuddled and navigated.

Our next night was spent on some rangeland outside of Patagonia, Arizona.   It seemed to be the perfect spot for peace and quiet, but the sunrise erupted in gunfire that sent the dogs to shivers. It seemed that there was a local “target practice” area just over the hill from us. The shooting started at about 8:00am and continued for hours. Feeling like we were at risk, we packed up and moved on pretty quickly. It did cause us to reflect on the recent months in Mexico- where gunfire was not commonplace and certainly not within 100 yards of campers!

Stopping at a health food store in Sierra Vista brought out the most amazing $10.00 bill.

It was tough to spend it, but a store filled with healthy foods, yummy smells and good vibes seemed to be the right place. Especially nestled next to a military base!

The drive across the desert of Southern Arizona is beautiful. We saw a VW Vanagon stopped at a riparian area, so we stopped to leave a free sticker on their windshield.

The recipient sent us an email of thanks later that evening. So cool to share the van-love on the highway, and feel reciprocated! We had lunch in a café in Bisbee at the WHyld Ass.

Then we camped in the yard of a fellow traveler that lives near the border in a small town called Naco. Nice people. Nice place. One of my favorite regions of Arizona.

Our morning crossing at Naco brought about a new and unexpected concern. We have crossed many Mexican states, and the borders several times in the past 6 months. But we have never been asked about our propane tank. This time we got a red light, as usual, I think they are bored and want to look at the odd vehicle. We pulled into the inspection parking and three female Mexican customs inspectors approached. The jefita (mujer a cargo= woman in charge)  tapped the front of the van and said, “Open the hood” in English. I replied that it does not open and she was immediately offended. She began to walk towards the back and stopped at the minion propane tank

and the battle between two women began.   Her Spanish was of a different cadence than my ear was accustomed to.   My Spanish was clearly frustrating to her. Our English was not bridging the communication gap. She asked if the tank held gas. I said yes. She said that we could not take a tank of gas into Mexico. I replied that we had been in Baja and Sonora with the tank of gas and had no issues at other border crossings. She said again, that we could not take a tank of gas into Mexico. I asked how it was possible that trailers and motor homes could take their tanks, and that this too is an RV with a stove and a sink. She stated again that we could not take a tank of gas into Mexico. I was becoming frustrated and fearful that she was trying to confiscate the tank vs. the gas inside. So I stepped over to the tank and said “OK, no gas.” and opened the valve. I saw the alarm on her face and I prepared myself for gas to begin spraying out of the tank towards her and her two backup singers. But to my great surprise, nothing came out!! She stepped closer, inspected the valve and said “OK, no gas.” I looked at Mike (who was standing 20 feet away entangled in dog leashes) and he said “I’ll tell you later.”   And with that, the propane battle was over. The woman asked me to open the toolbox on the front, peered inside and then said, “OK, you can go.” So we loaded up and drove away.   After a safe distance I asked Mike why no propane came out when I opened the valve, as I was sure the tank was full. He explained that this tank has a safety feature on it that the gas only comes out when the valve is open and the internal release is pressed, as by a hose or fitting. The tank is full and we just brought propane into Mexico for about the 100th time.   It was a great reminder that you never know what to expect at the border, but something strange usually happens.

The drive to Nuevo Casas Grandes passes through mountains, agriculture and a few industrious towns. The city itself is quite a busy crossroads. We passed through and went to check the archeological site of Paquime. We found out that it is closed on Mondays so we had the day to find a place to stay and hang out. The RV parks mentioned in Churches book are closed so we rented a cheap room for $250 pesos. It included Wi-Fi and a hot shower, but we slept in the van in the parking lot.

Paquime is a huge archeological site that has been acknowledged as a UNESCO location and presented with great care. All the signage is in both Spanish and English. The museum is well prepared and informative. The grounds show signs of restoration and maintenance. It was once a huge settlement, and the remaining structures are beautiful. Touring the museum and the grounds only takes about 2 hours. I am not sure I can recommend this as a destination, but certainly worth a stop along the way if you are in the area. 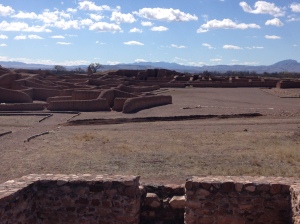 We left Paquime and stopped for some roadside food

and then headed for Juarez/El Paso. We needed to turn in our 6-month vehicle permit since this was our last foray into Mexico until we head down the Pan-American. Finding a Banjercito in Juarez turned into a needle in a haystack type project. We drove around the one-way streets, through the crowded crossings and finally ended up on a bridge to America. We could not find a Banjercito anywhere and we were now wedged into 5 lanes that would, in the next hour or more, lead us to the USA side of the Rio Grande. Sticker return could wait; it was time to prep for a border inspection filled with surprises. This one did not disappoint. The US Border Patrol booth agent sent us for an agriculture inspection. The US Border Patrol agriculture woman said her ag-dog would not be able to work in our van, due to the smell of our three dogs. I went into the van and handed out our potatoes, some elk sausage and the raw meat from Safeway I was going to feed the dogs for dinner.   She asked in her stern voice- “You have declared the following items, but do you take responsibility for any illegal items located inside this vehicle?” I replied that I did and stepped aside. She peeked inside the slider door and seemed overwhelmed at the prospect of searching our little home. She consulted with another agent and they decided I would need to drive the van through an x-ray machine. I prepared to abide, but warned her that I did not think the van could clear the upper portions of the machine. It did not look like there was enough clearance, but the machine was not labeled and we could not be sure. She stood confused and frustrated. Mike was again standing twenty feet away, entangled in leashes and watching me try to appease a border agent- twice in three days! Finally she and the others settled on sending me through the huge x-ray machine designed for semi trucks and trailers. I drove through and parked (they took the keys so I could not speed away) to wait for the men behind the curtain to give us a go-ahead. Shortly they returned the keys and our passports and told us we could load up and go. Whew… this border crossing took about 3 hours and we still had not returned our permit to Mexico!

A little bit of Internet research showed us that we were not far from the San Jeronimo/Santa Teresa border crossing. It seemed that there was a Banjercito office there, but since it is not 7pm, it may be closed. We decided to give it a try, it could not be worse than the borders we had recently dealt with. And finally, it worked. We crossed easily into Mexico one more time. Made a U-turn just before the Mexican inspection station and pulled up to the Banjercito booth. Turning in the permit was quick. Another U-turn and we drove back to the US border, a quick chat with the US Border Patrol and we were done. This whole thing took us less than 10 minutes.

A quick check of iOverlander (our favorite app for finding camping spots  http://www.ioverlander.com   ) led us to the Pancho Villa State Park nearby and we settled in for the night.   The next blog will tell more about our visit to New Mexico.   Thanks for following along, and as always… keep those questions and comments coming. We love getting emails from you!