After passing through the snowy, rainy, muddy Andes roads we were back on pavement for a while.  When we looked behind us we could see the snow covered peaks, peeking through. 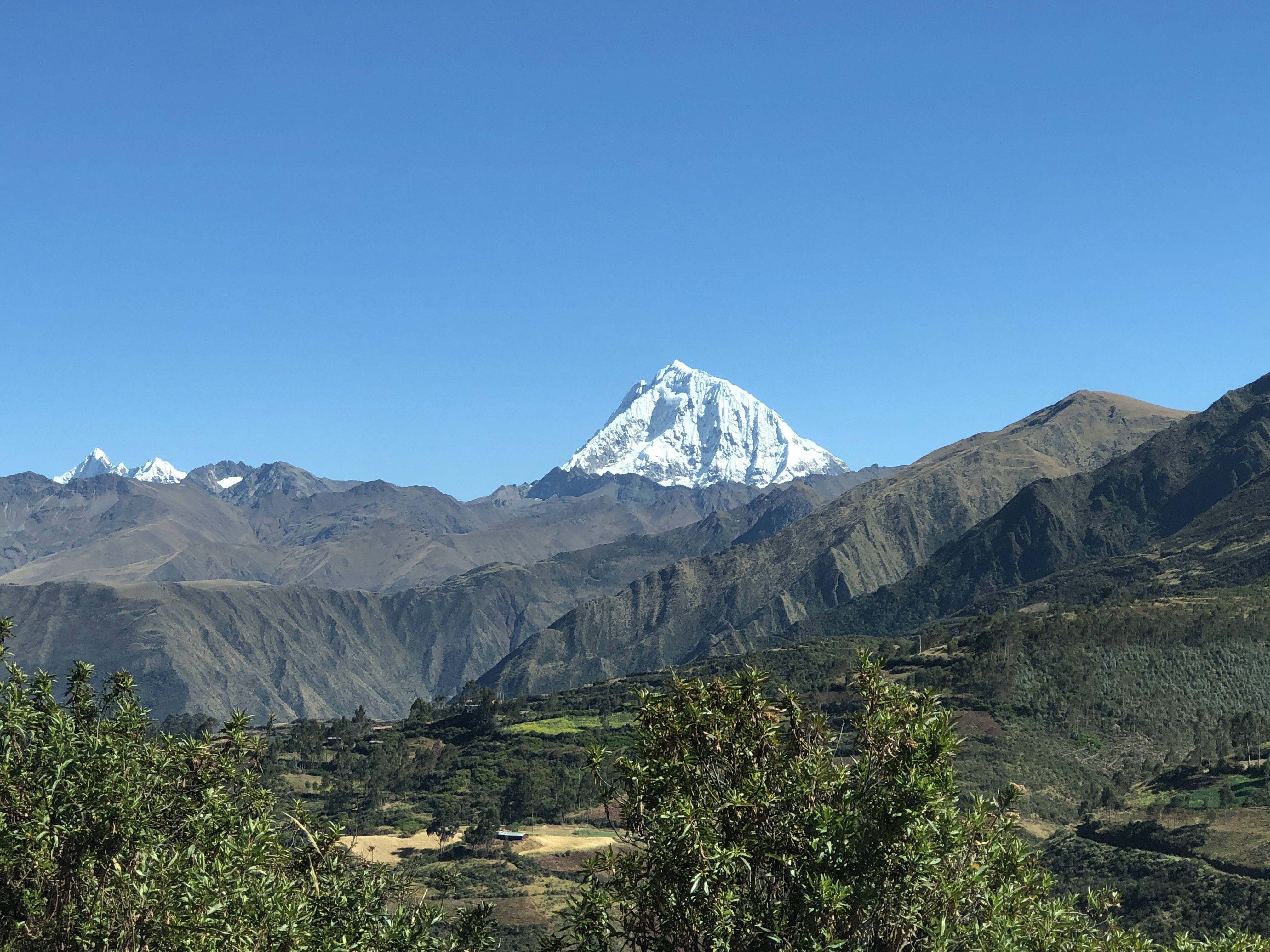 We found another riverside campsite and relaxed for two nights there.  Mike did the dishes in the clear, cold water.

The dogs relaxed in the sand of the river and Nica demonstrated her digging skills.

Again it was time to clean up, so we located the Fierro Termales.  These are iron rich, warm water springs.  There are large community pools and then private rooms with deep tiled tubs.  Mike is modeling the use of the private tub!

We spent the night in front of a beautiful, old convent.  The Santa Rosa convent housed many Franciscan missionaries here as they prepared for their religious work in the Amazon.  There are many tragic stories of the outcome of those missionary attempts.  The untouched tribes and people of the Amazon did not warm to the religious visitors and many were murdered.  Inside the convent is a colorful chapel dedicated to the martyrs from those missions and respecting the indigenous of Peru.

The real highlight of the convent was the library.  There are volumes in this library that are bound in dried animal hide, written in Japanese script, painted on fabric and much more.  There are over 25,000 volumes here and the oldest dates to 1525.  There was an older one but it was stolen during an armed robbery a few years ago!  Who robs a convent?? 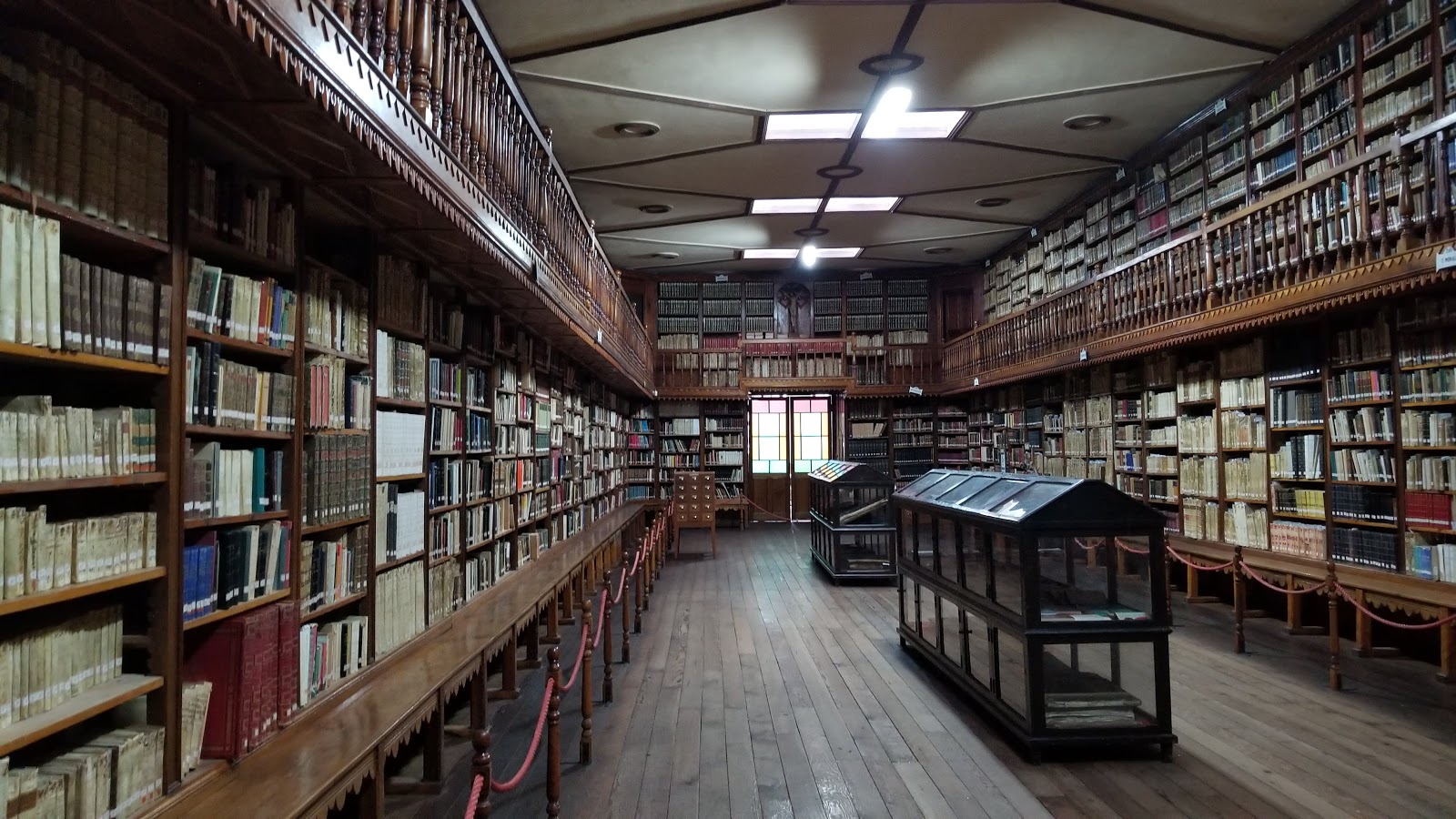 Outside the monastery we observed the gardner cutting the grass in the traditional method.  He was using a sharp machete and swinging it rapidly over the blades.  In the other hand he holds a broom to clean up the cuttings. Peruvian ninja, perhaps?

There was another traffic jam when we returned to our camper.  This photo clearly shows that we had to wait for the locals to moove along before we could drive away. 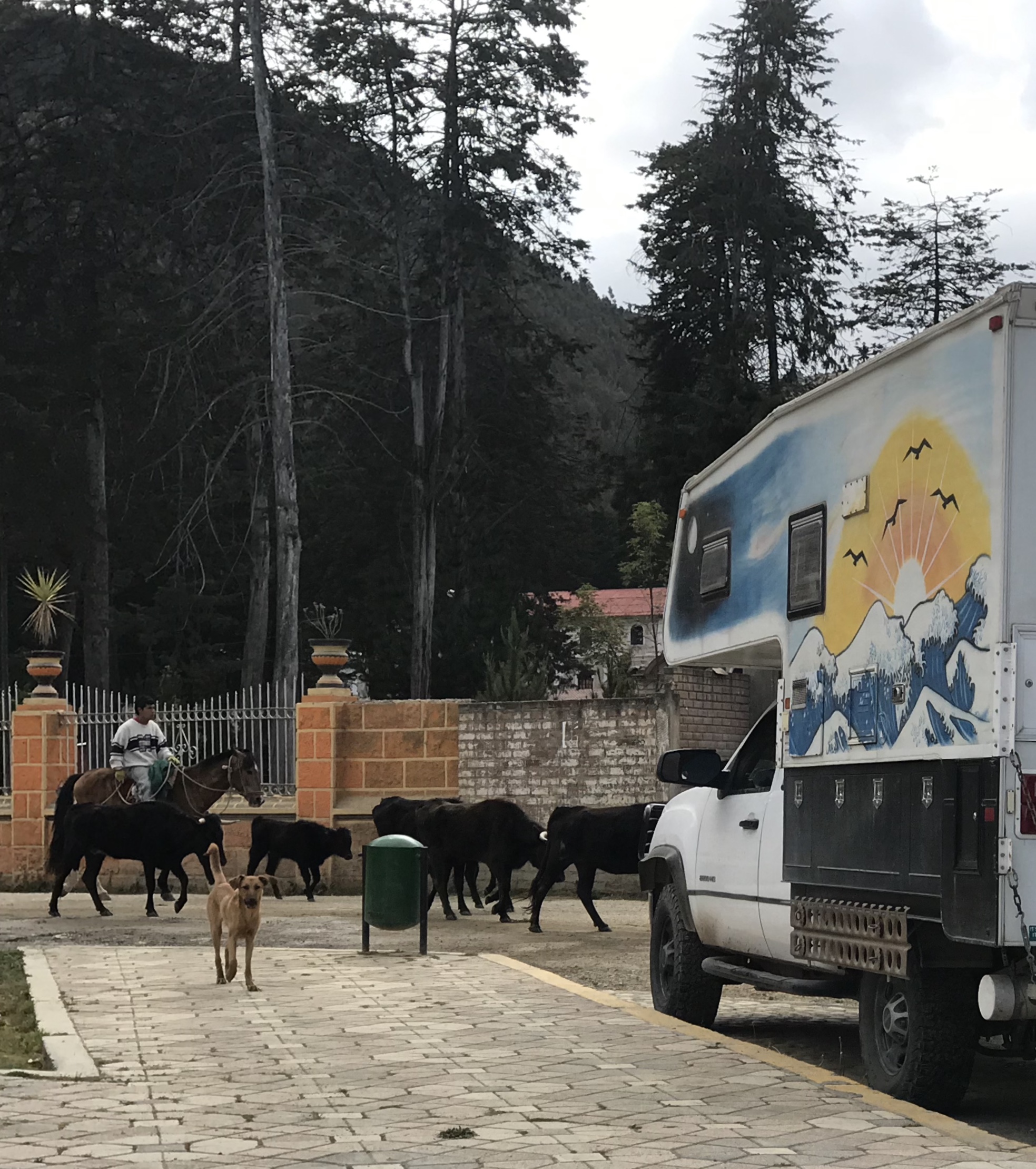 The next ancient place we visited was named Kotosh.  The Kotosh Ruins are surrounded by sports fields, a pool a riverfront park and a community center.  It was quite the hub of activity.  Once we were able to walk through the ruins we quickly realized that the highlight was the crossed arm temple.

While there we met a nice guy from Lima who introduced us to his family. He wanted to practice his English.  We chatted and showed his family our home.  We hope to meet Gerardo and his family again when we are in Lima.

I was very moved by one of the ceramic items found on the site.  I took a couple of good photos of it to show you.  Interesting, huh?

But it was time to say goodbye to this desert climate and move closer to the edge of the Amazon jungle.

We spent our first jungle night at a fish farm near Tingo Maria.  This fish farm has large ponds where they raise the fish.  You can go fishing and pay by the kilo.  Or you can just pay for a meal.

But the fish at this farm are paiche (aka arapaima or pirarucu), the largest fish in the Amazon!  They can grow up to 400 lbs and 10 feet long!

We did not see one that large.  Actually all we saw were the pieces on our plate.  And that was enough for me!

But the owner is a quirky guy with a great sense of humor.  Check out this funny banner hanging near the fishing area. 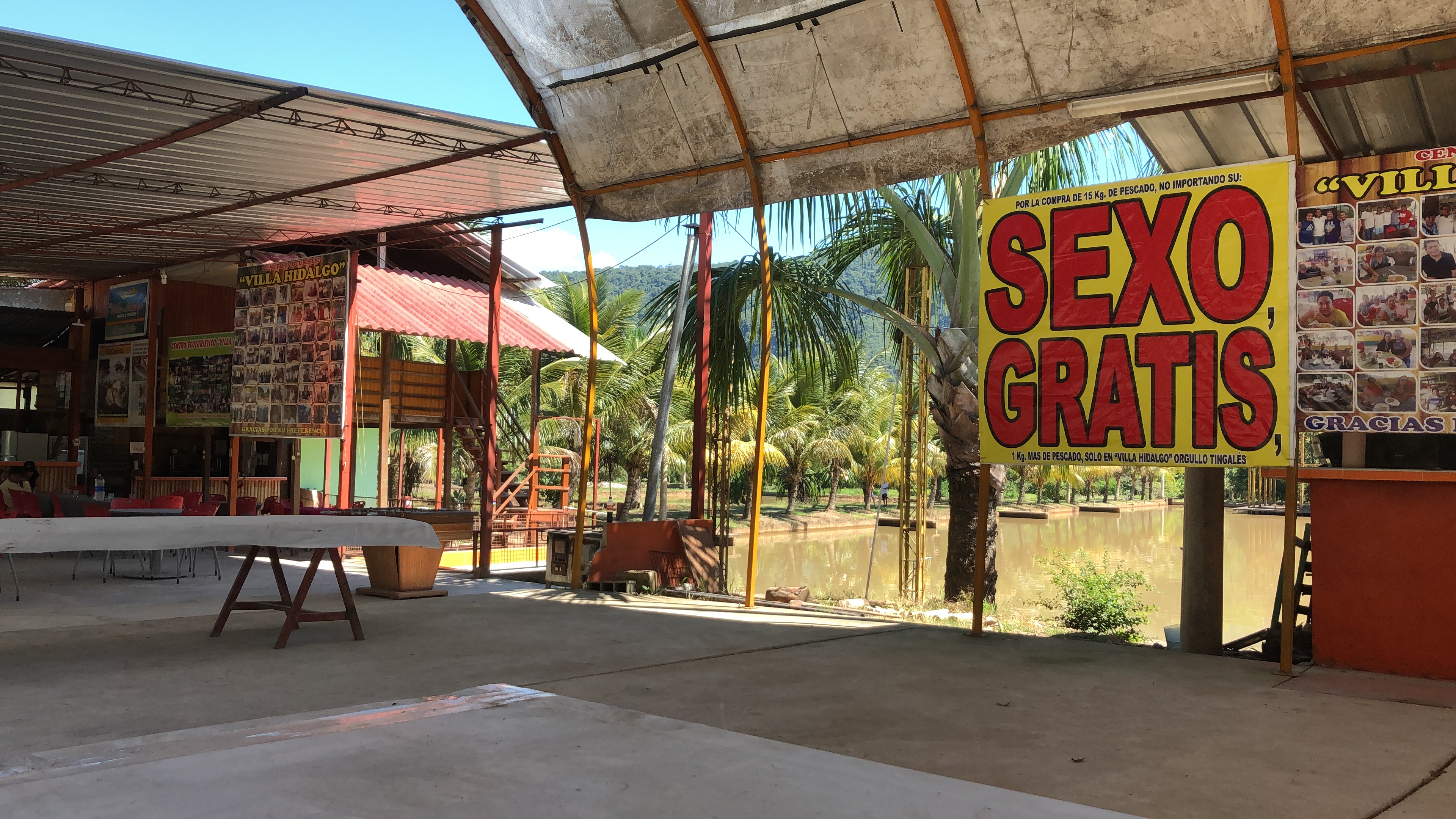 Now for an explanation of the banner that caught your eye….

Another interesting thing here is the unusual pets that wander around.  The man owns three jungle javelina.  Yes, there is such a thing as an Amazon javelina.  And these have been hand-raised.  So they come in each night for a good night kiss.

This took us to the edge of the Amazon jungle region.  We took a wonderful $1.75 ferry across the Huallaga River.  It was time for us to tackle the rough roads that would take us out of the jungle and across to the north portion of the Cordillera Blanca. 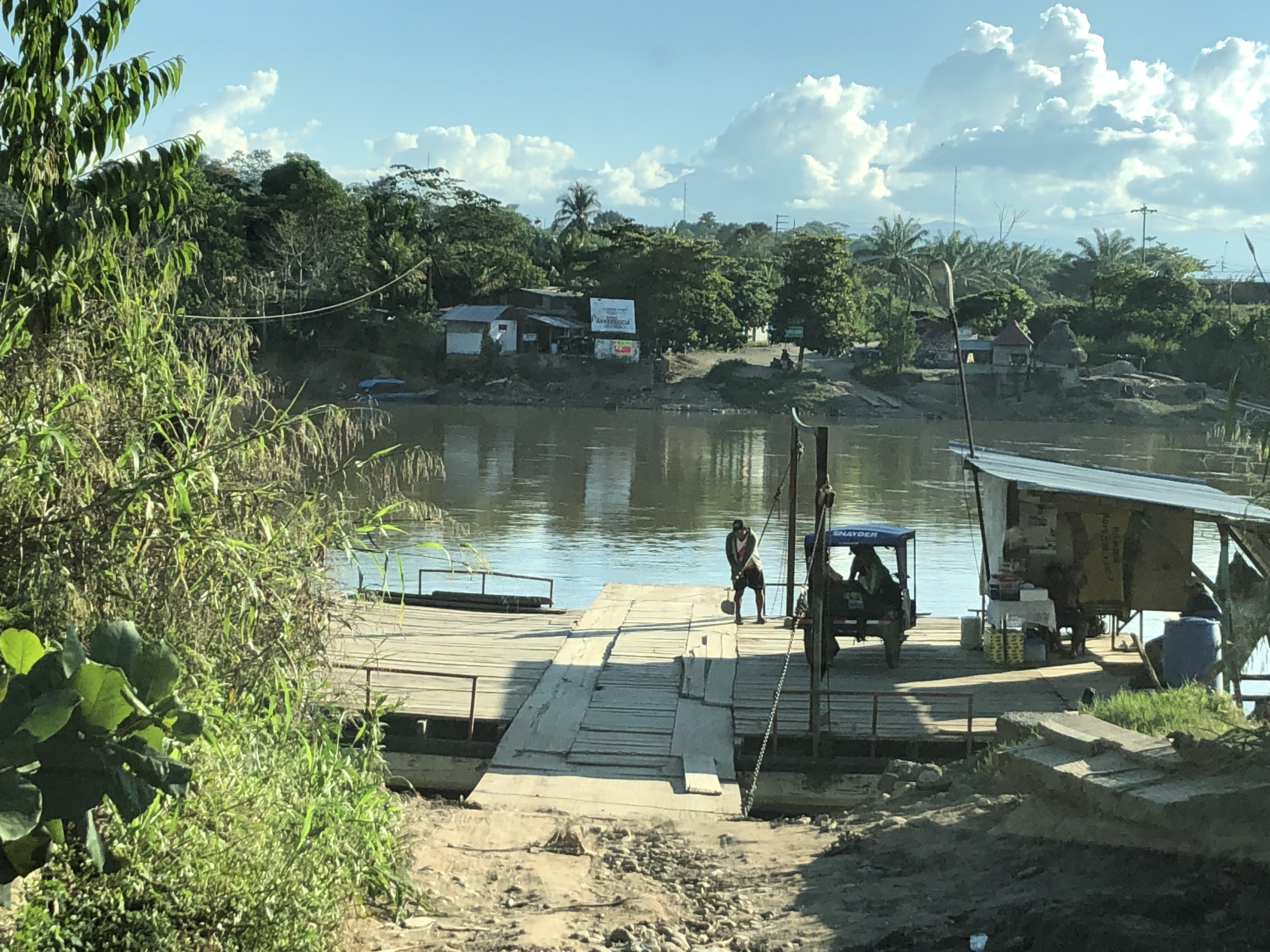 I will close this post with a photo of Pacha smiling.  This is the first time I captured her smile on camera.  More about our new dog later.  But see if this makes you smile. 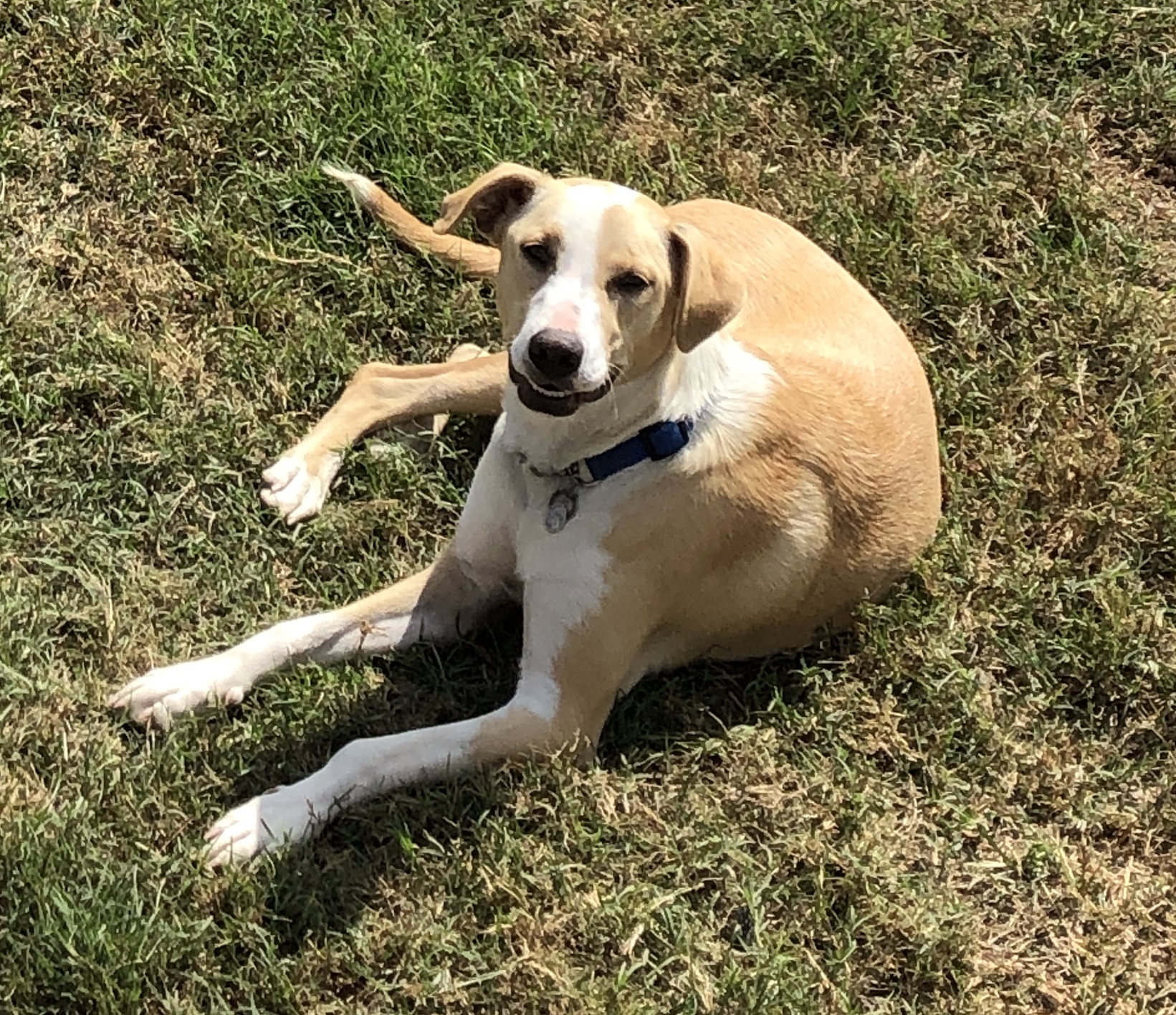 One thought on “Peru- Exploring the edge of the Amazon”