We had a little time to explore some off highway areas of Peru so we decided to go through the Central Highlands along the edge of the Amazon and over the the Cordillera Blanca.  The Saywite (alternative spelling: Sayhuite) Ruins and Saywite Monolith was our first stop. 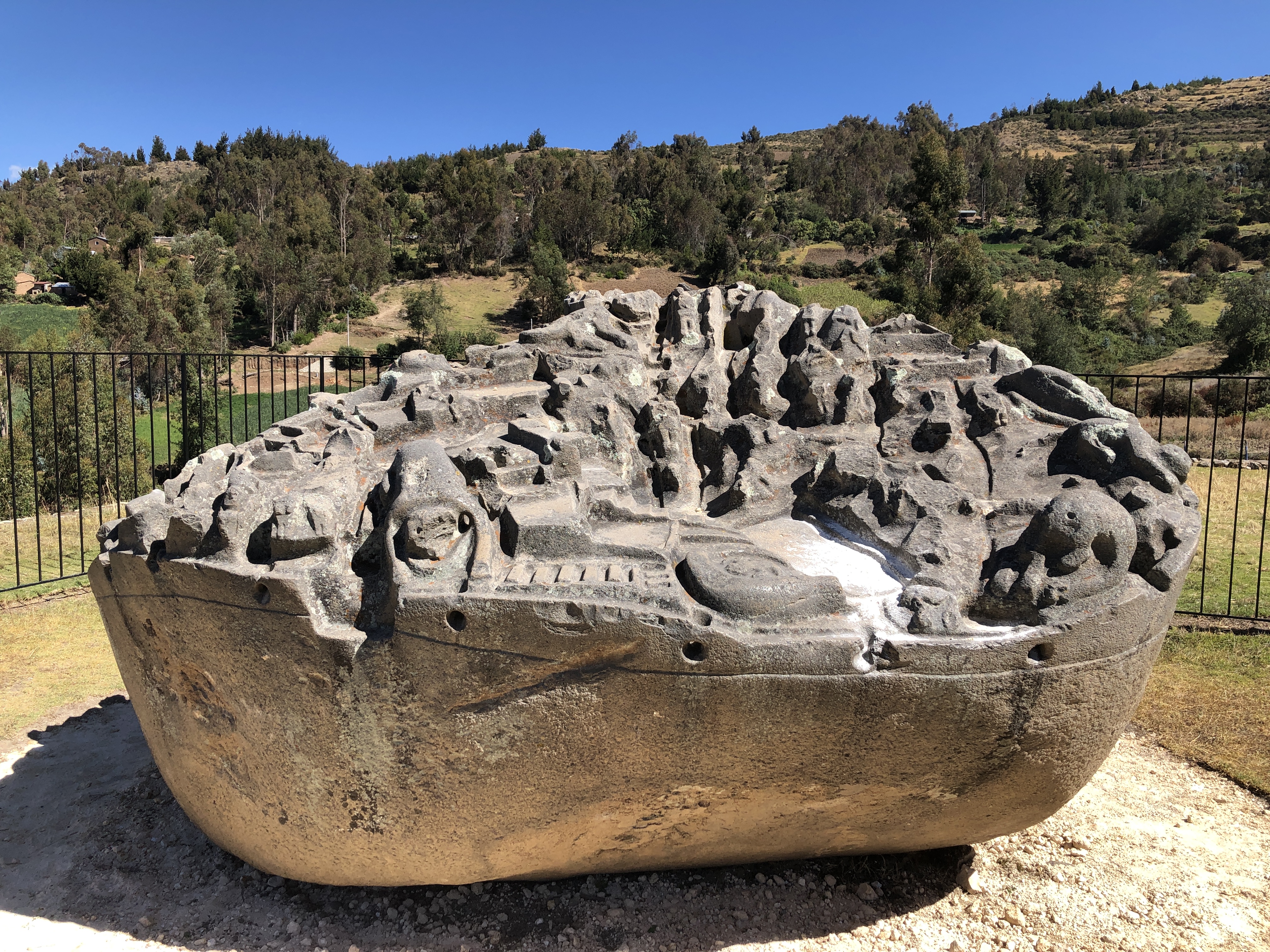 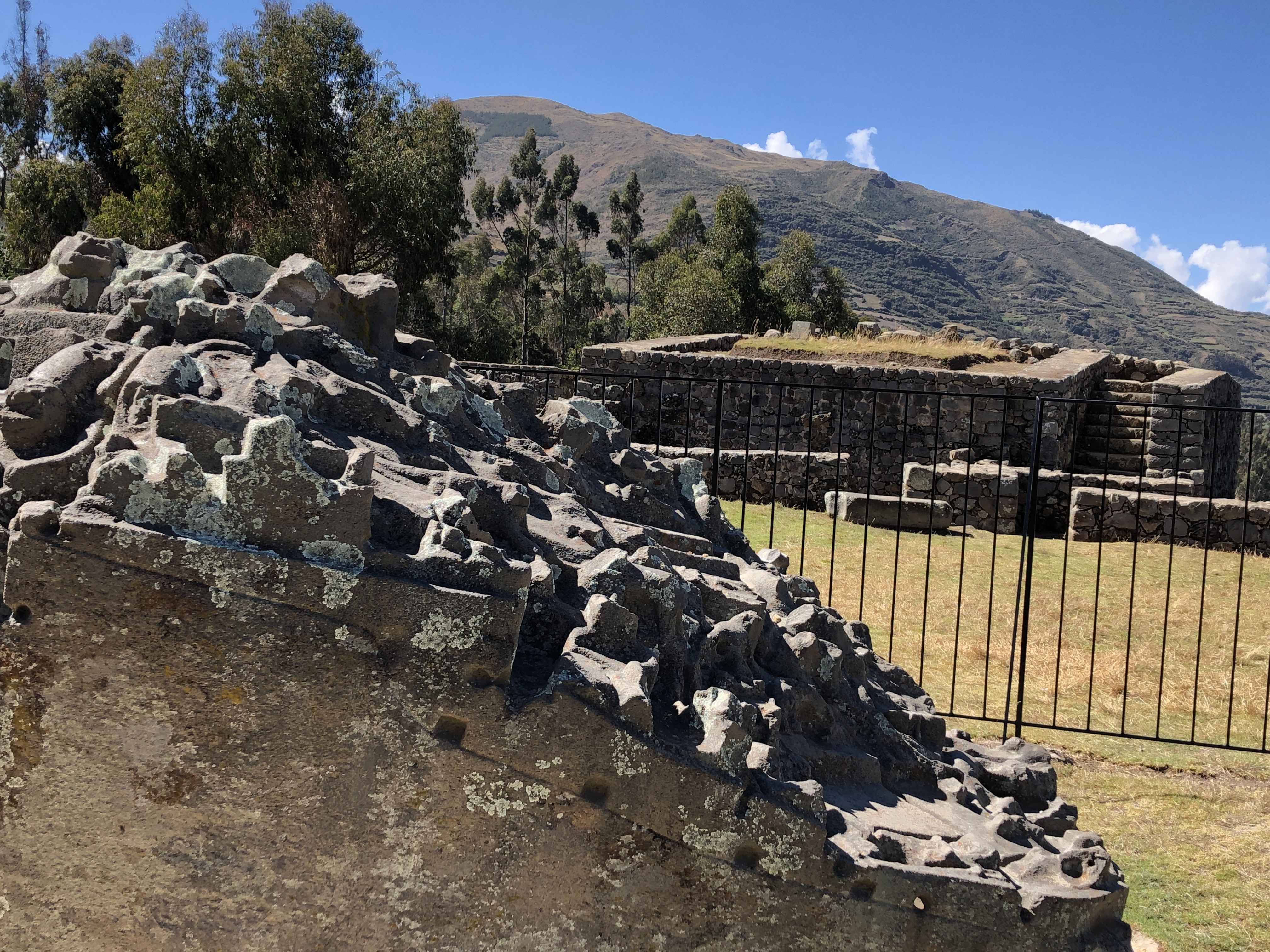 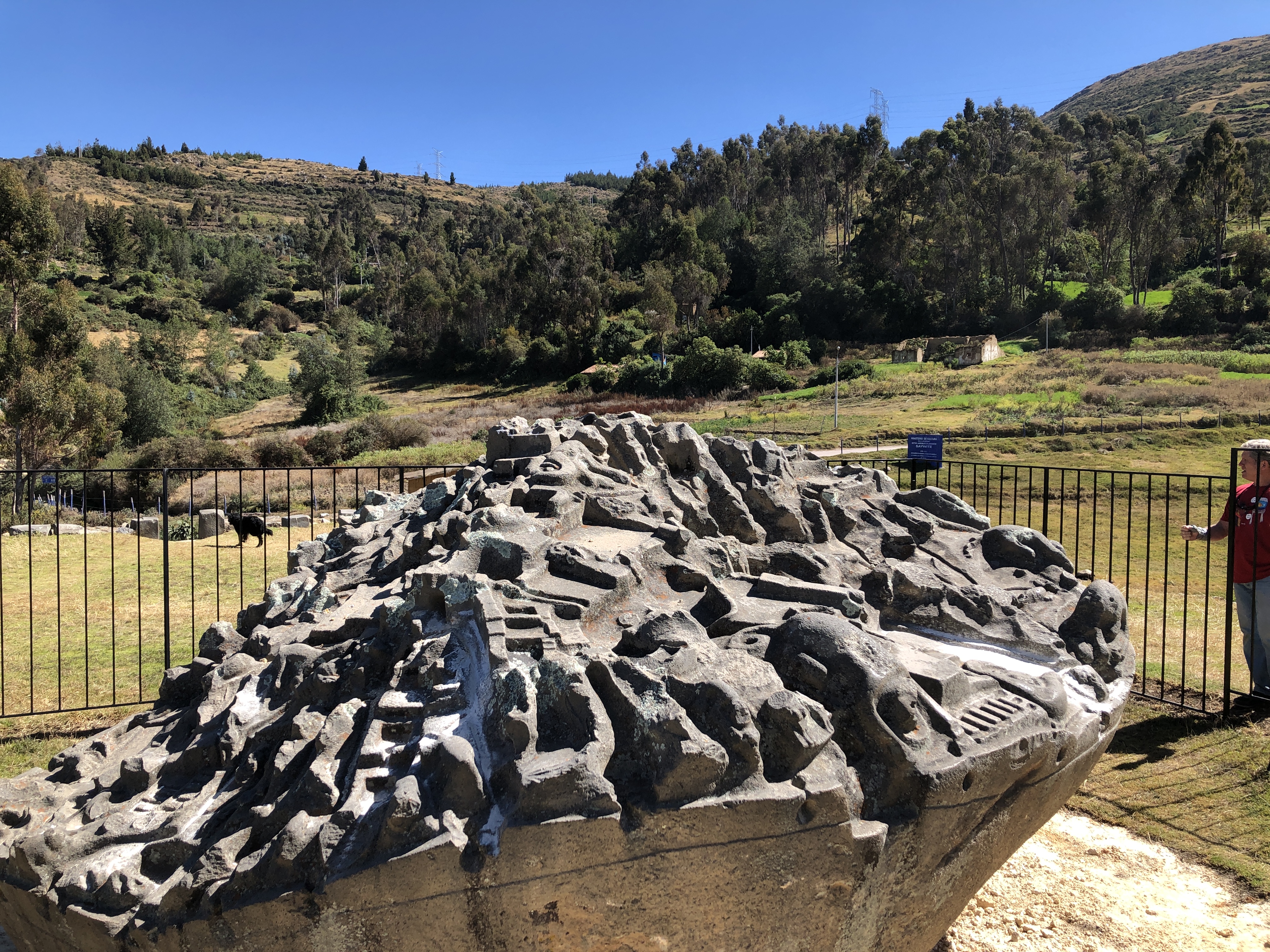 This stone contains carvings of animals, humans and religious temples all intertwined with water channels. It appears as though it was used to study the flow of water through terraces, streams, tunnels and irrigation channels.  It is believed that the stone and this site were part of an Incan religious center for water worship ceremonies.

Also in this archeological complex is a temple with an elaborate, terraced, water flow system.  The main temple has several rooms which we explored.  Notice that Nica was allowed to wander freely through the ruins with us.

On the backside of the temple we found a small group of school children doing their homework.  Behind them is the elaborate water feature of the temple.  (now dry for purposes of preservation)  What an amazing place to meet up with your friends! 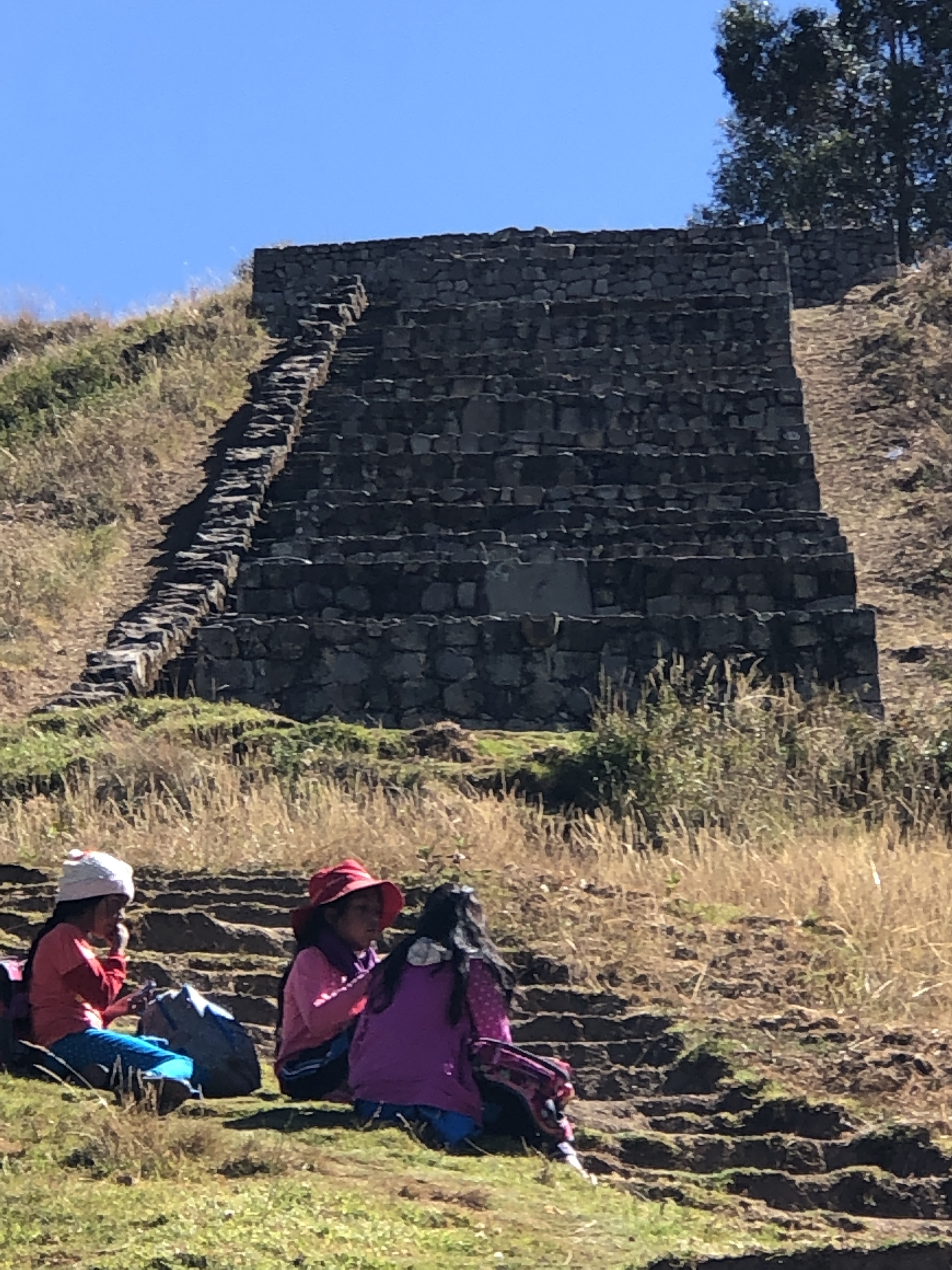 Further down the path we found some large, interesting stones carved into various shapes.  They may have been part of a water management system at one time. 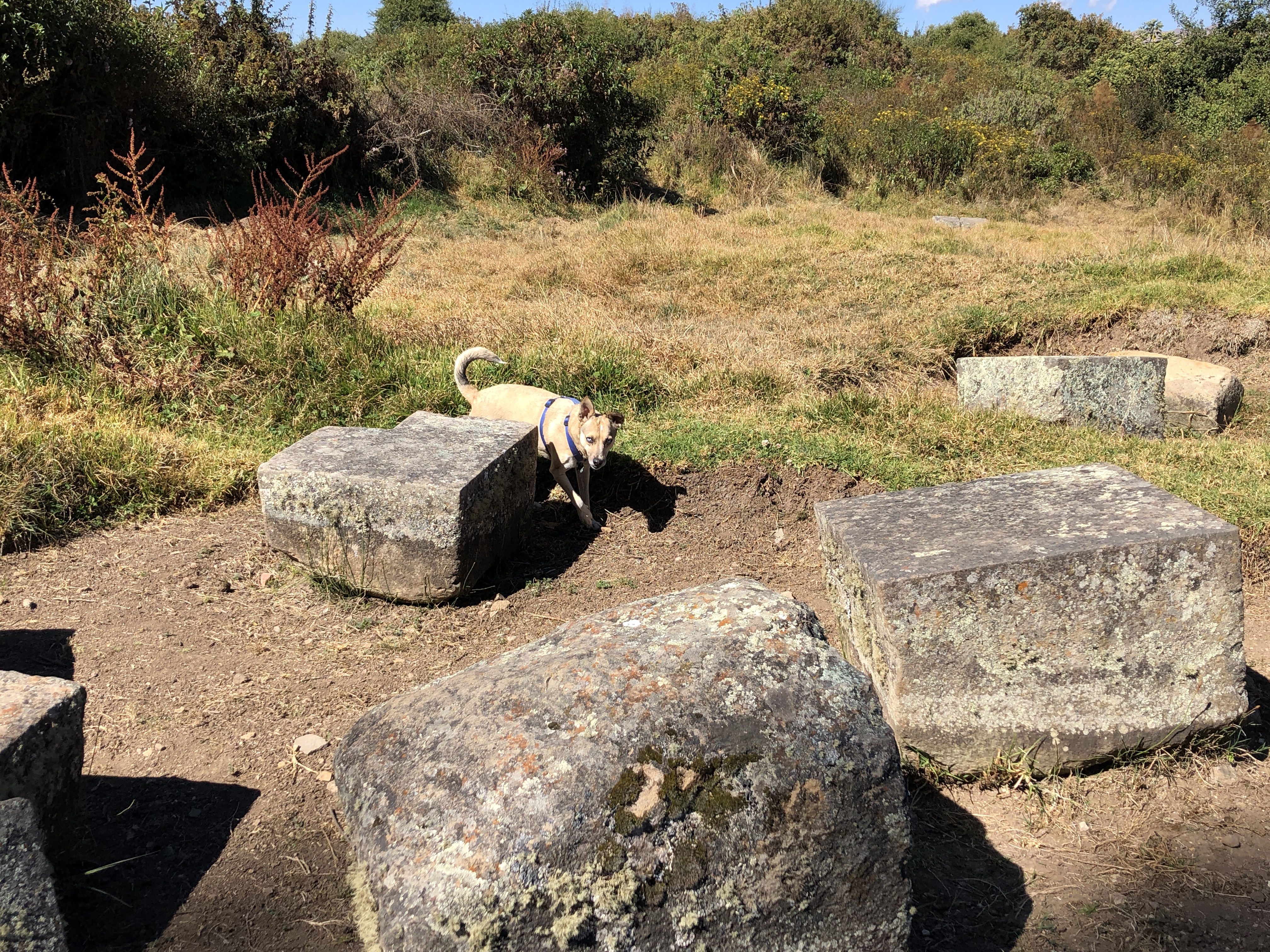 Nearby are even larger stones carved to appear as thrones or seating areas. 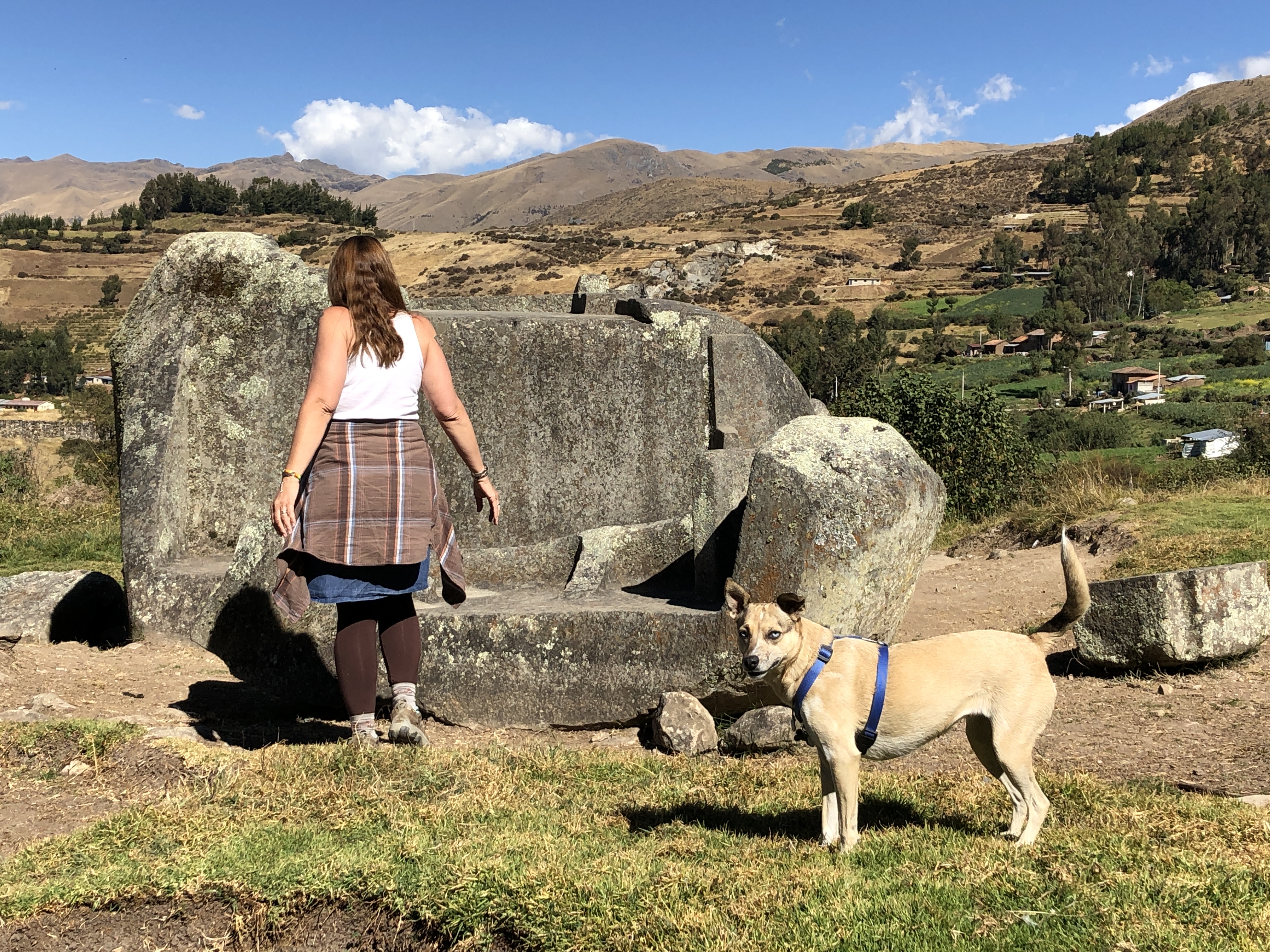 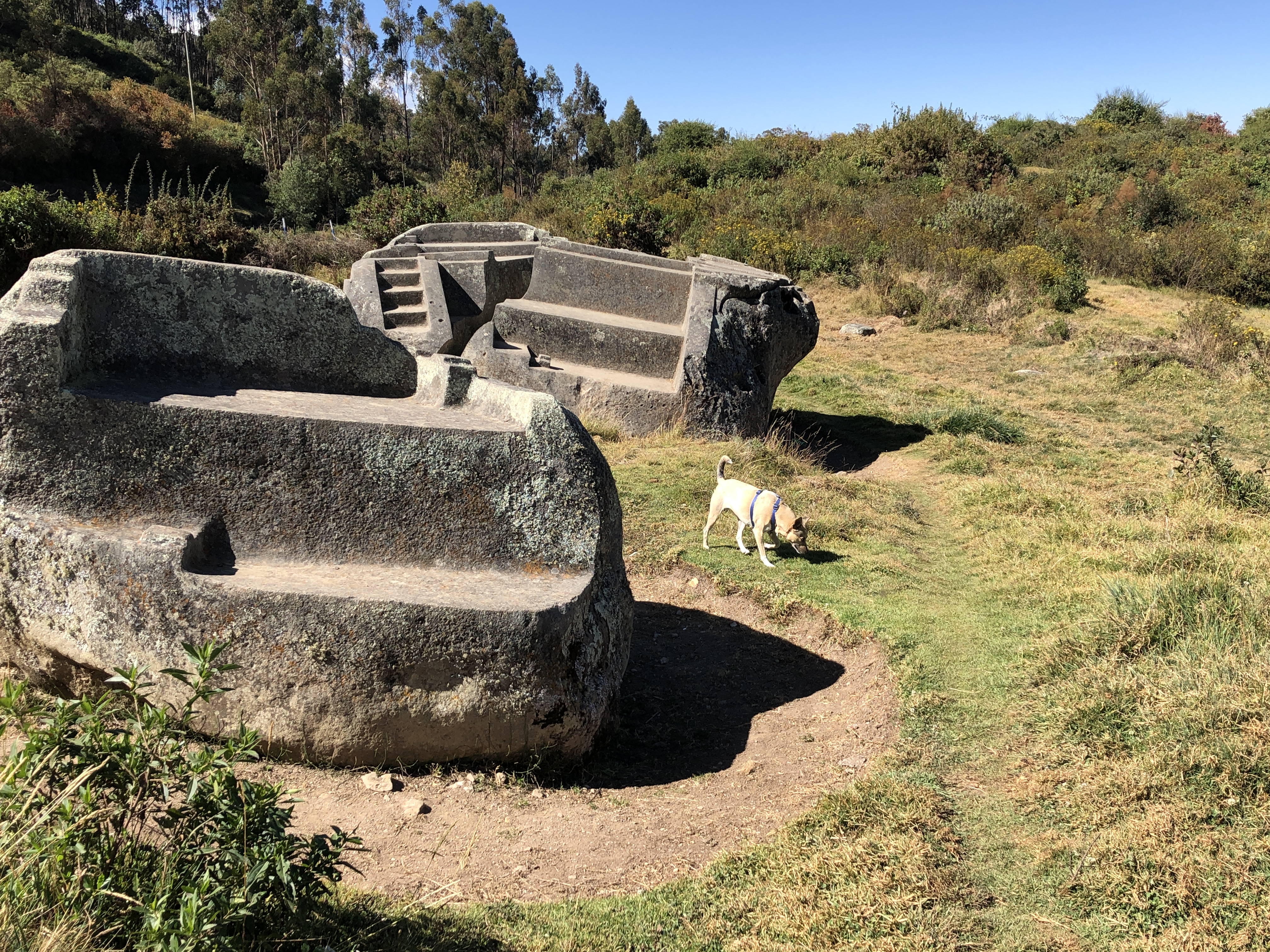 The final stone we examined in this area is a HUGE boulder that has been carved for a specific, yet unknown purpose.  Sometime after it was carved, this boulder was split dramatically in half!  Because of the size of this boulder, you can imagine the force that was necessary to split it right down the middle. 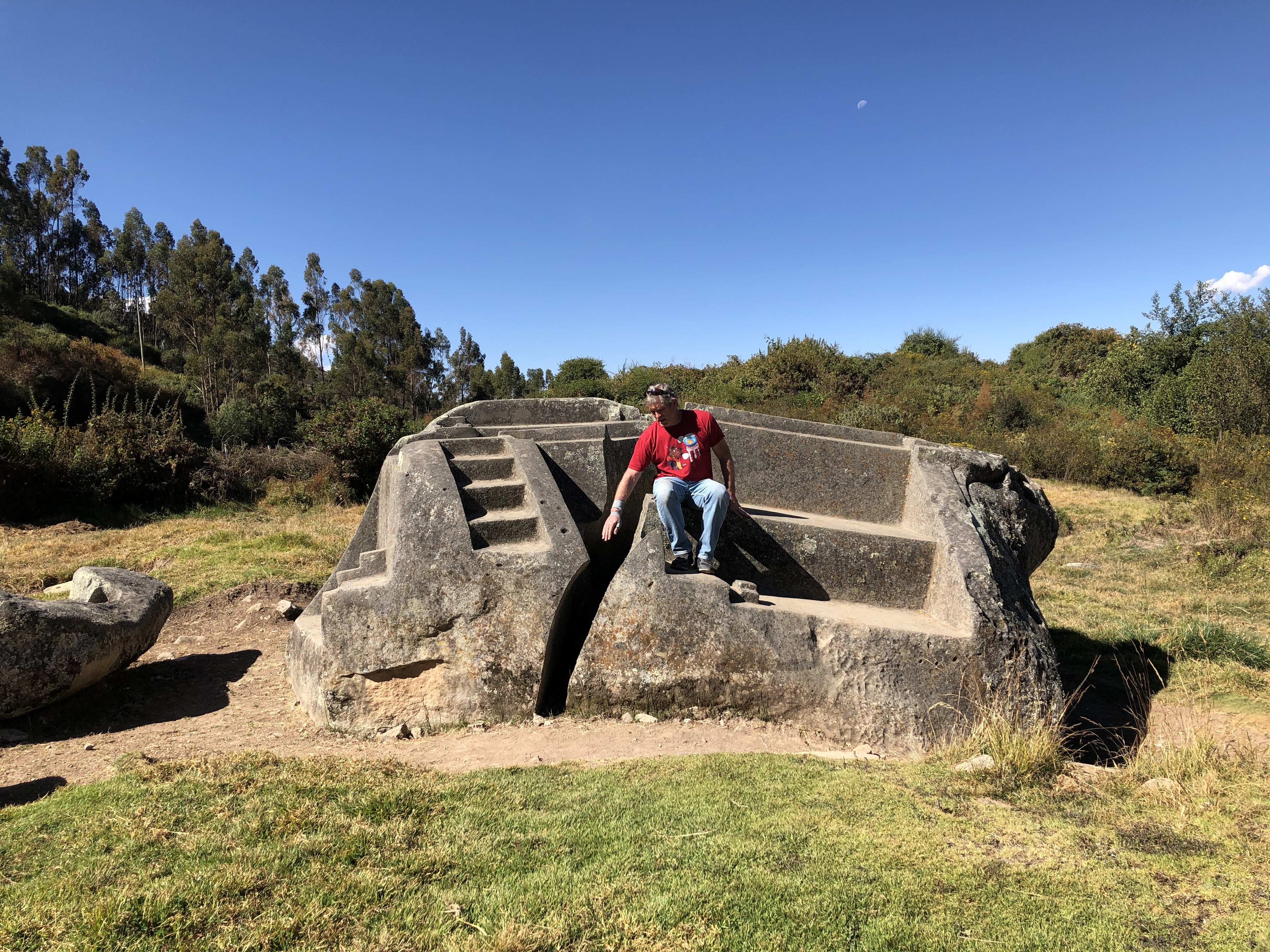 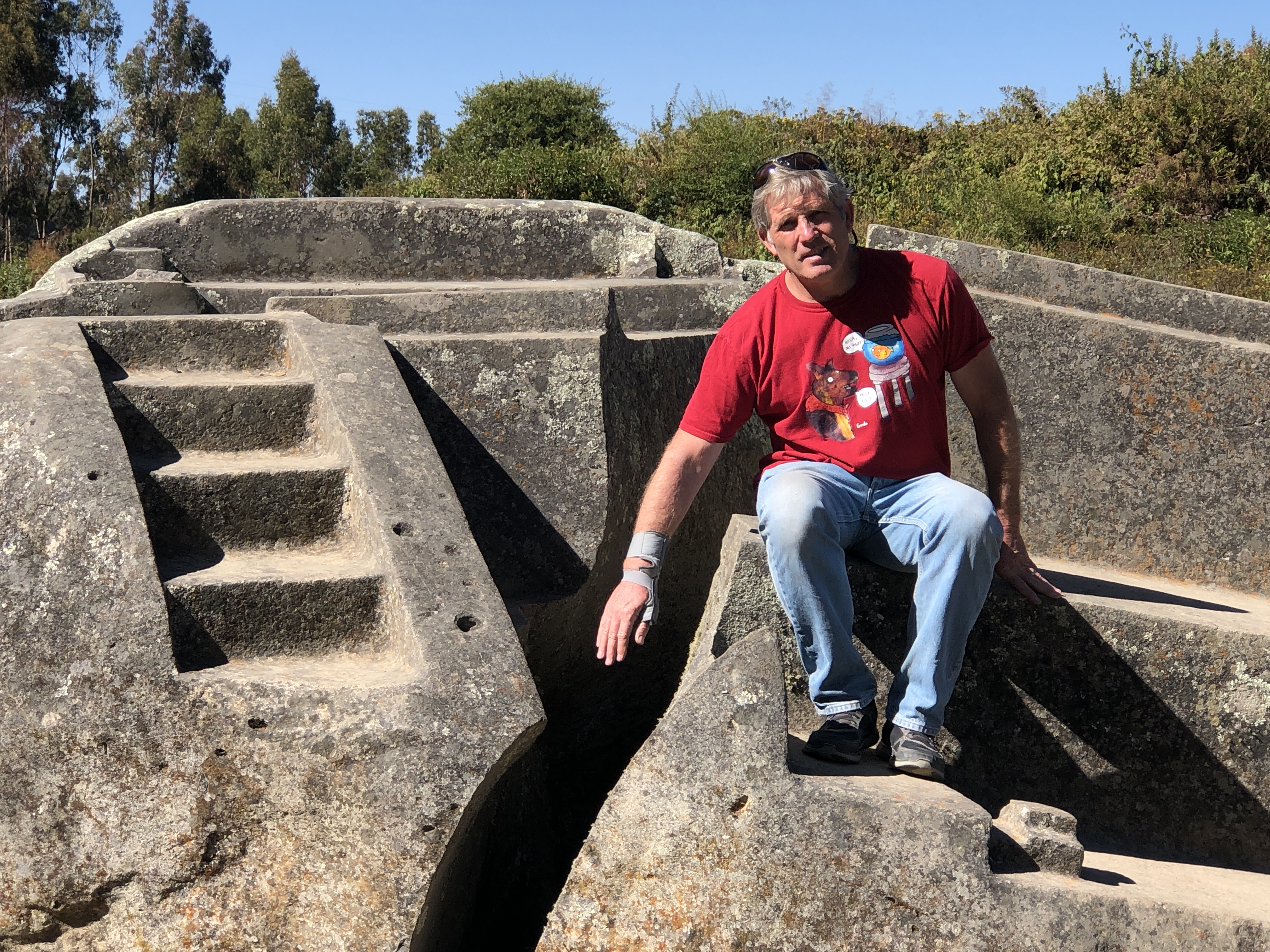 In addition to the steps or seating area, this huge boulder also has carved bowls and channels on top. The channels lead off the edge of the boulder and into carved receptacles.   These bowls were either used to hold various bodily organs during sacrificial and bloodletting ceremonies… or they were part of a water flow demonstration.  Or both!  In the photo you can see the dark lines of the drainage channels that lead away from the top of the rock. 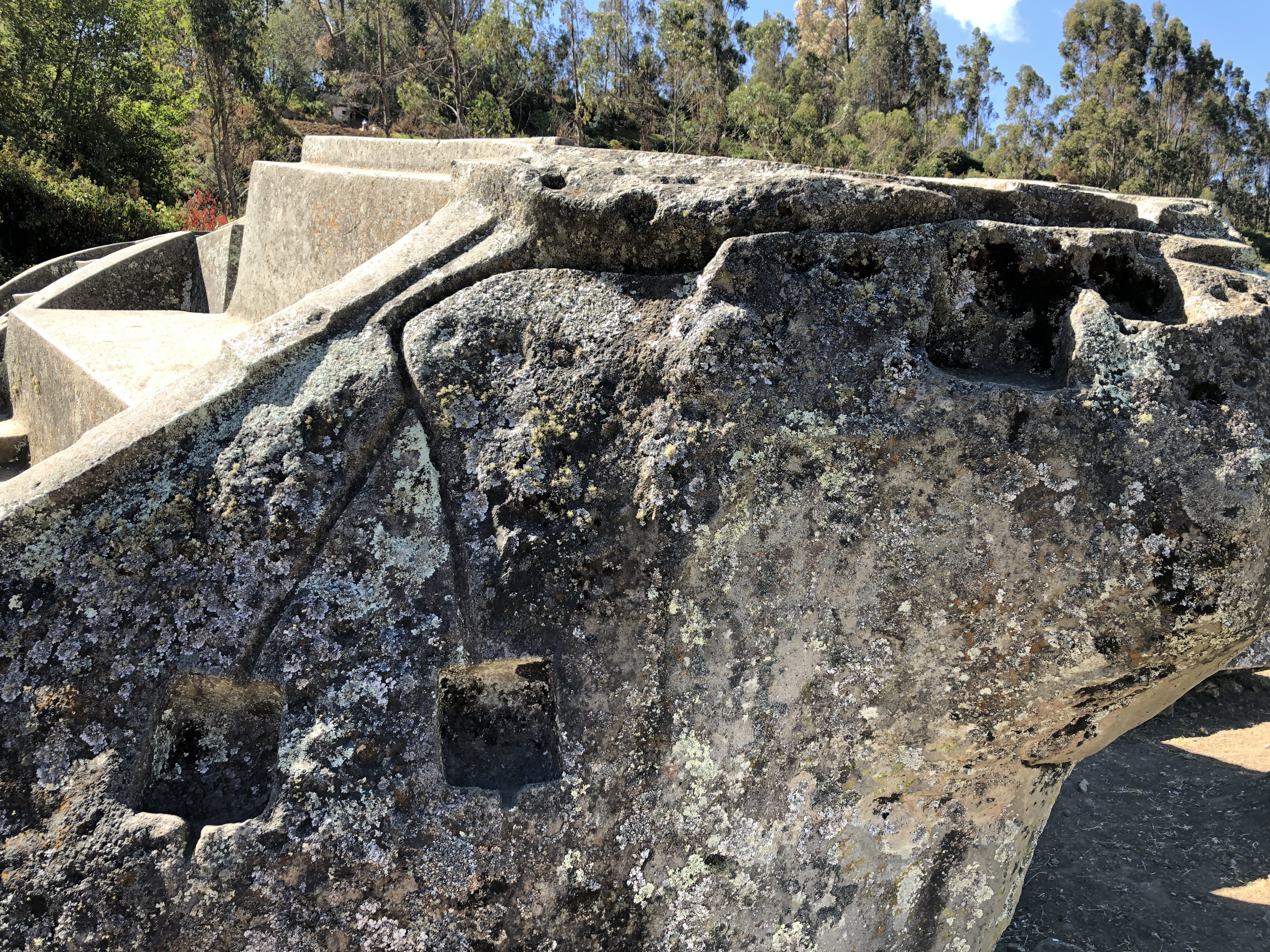 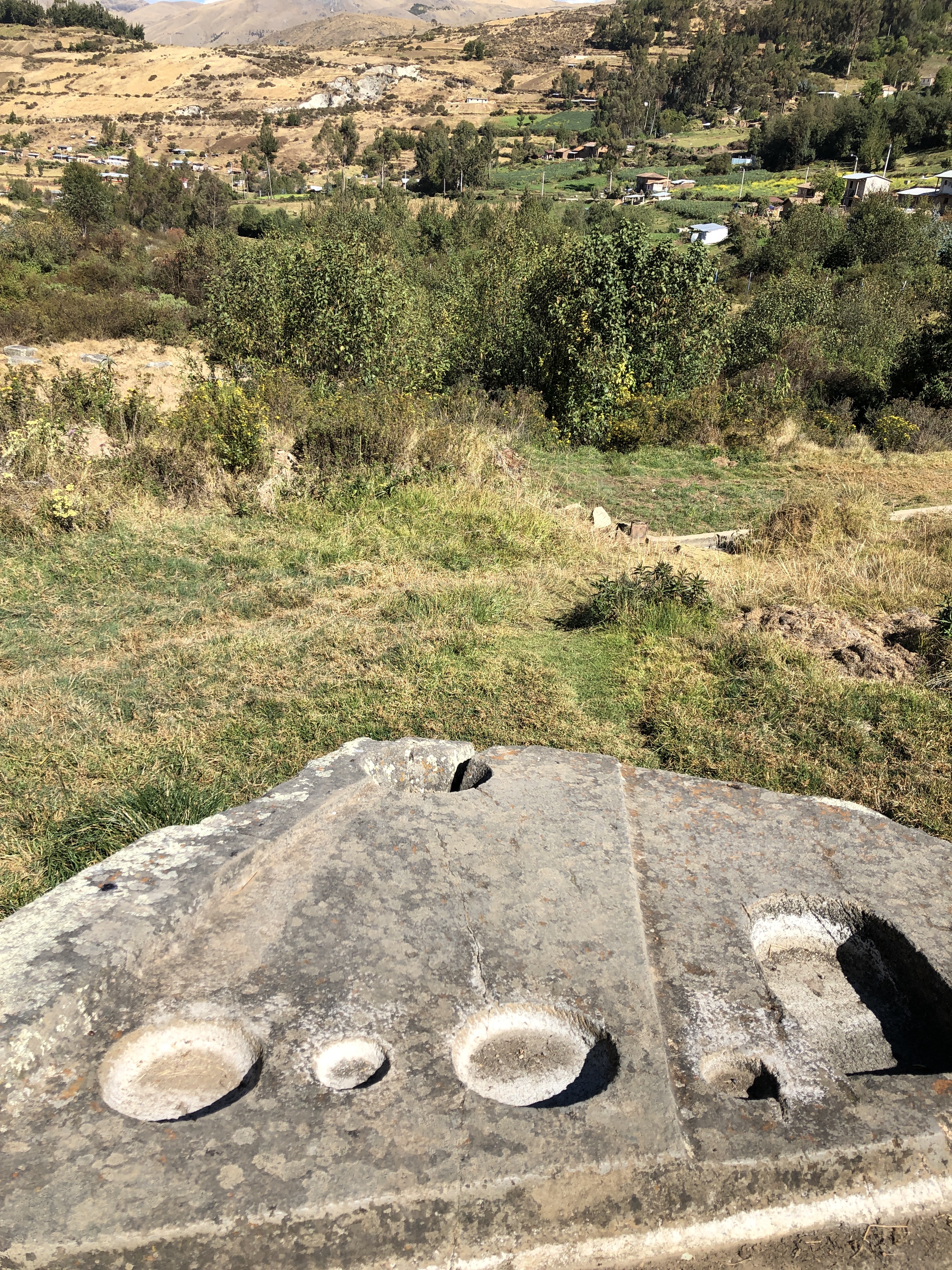 Our next campsite was the parking area just outside the Caramba Ruins.  This area is an unrestored archeological zone, believed to have been an Inca administrative site.  The rough condition demonstrates the way many of the famous ruins of Peru would look if they were isolated and unfunded as these are.  But even though it isn’t restored, the temple at the end of the central field is quite impressive.  As are the snowy peaks of the Andes on the horizon. 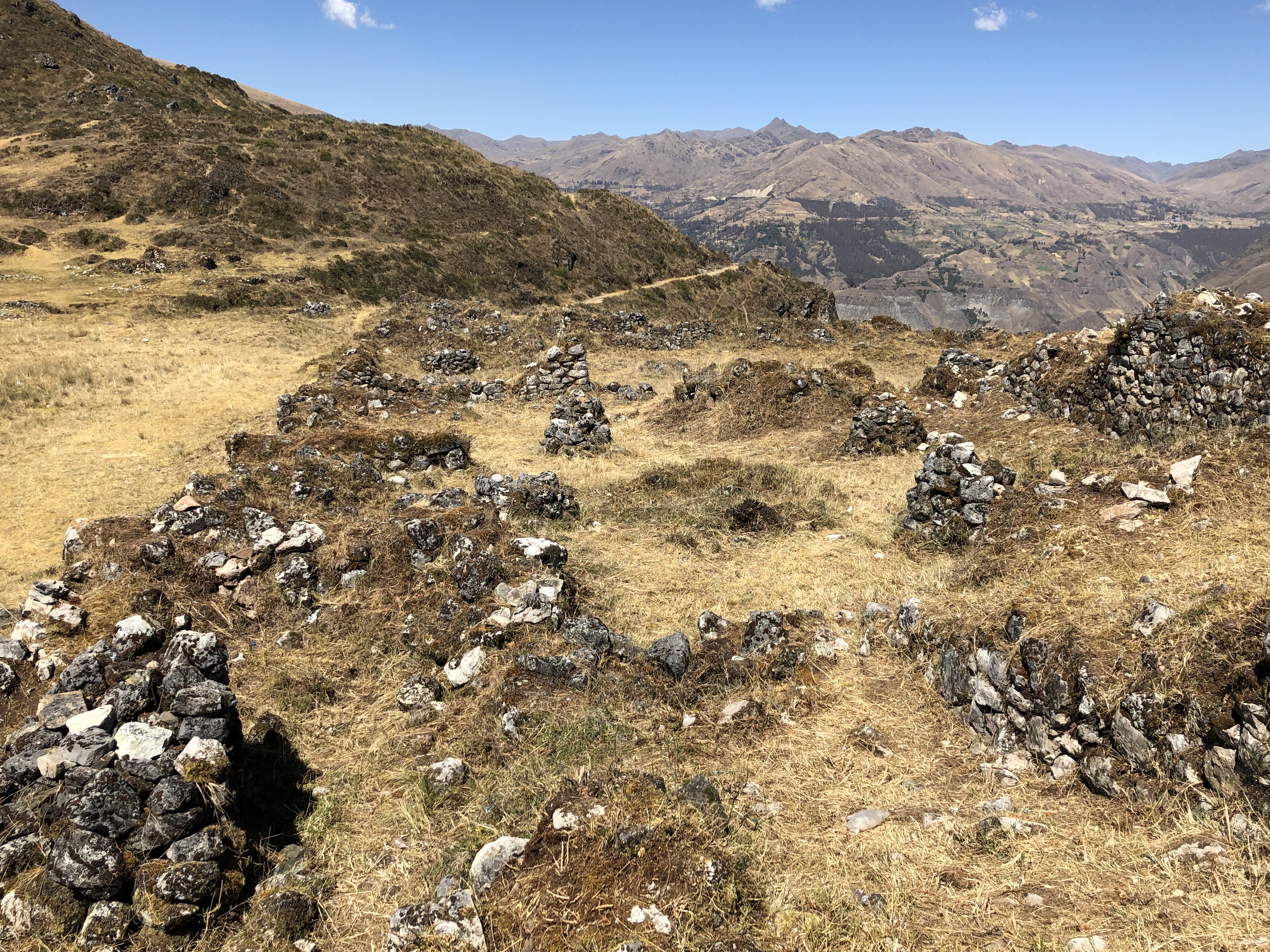 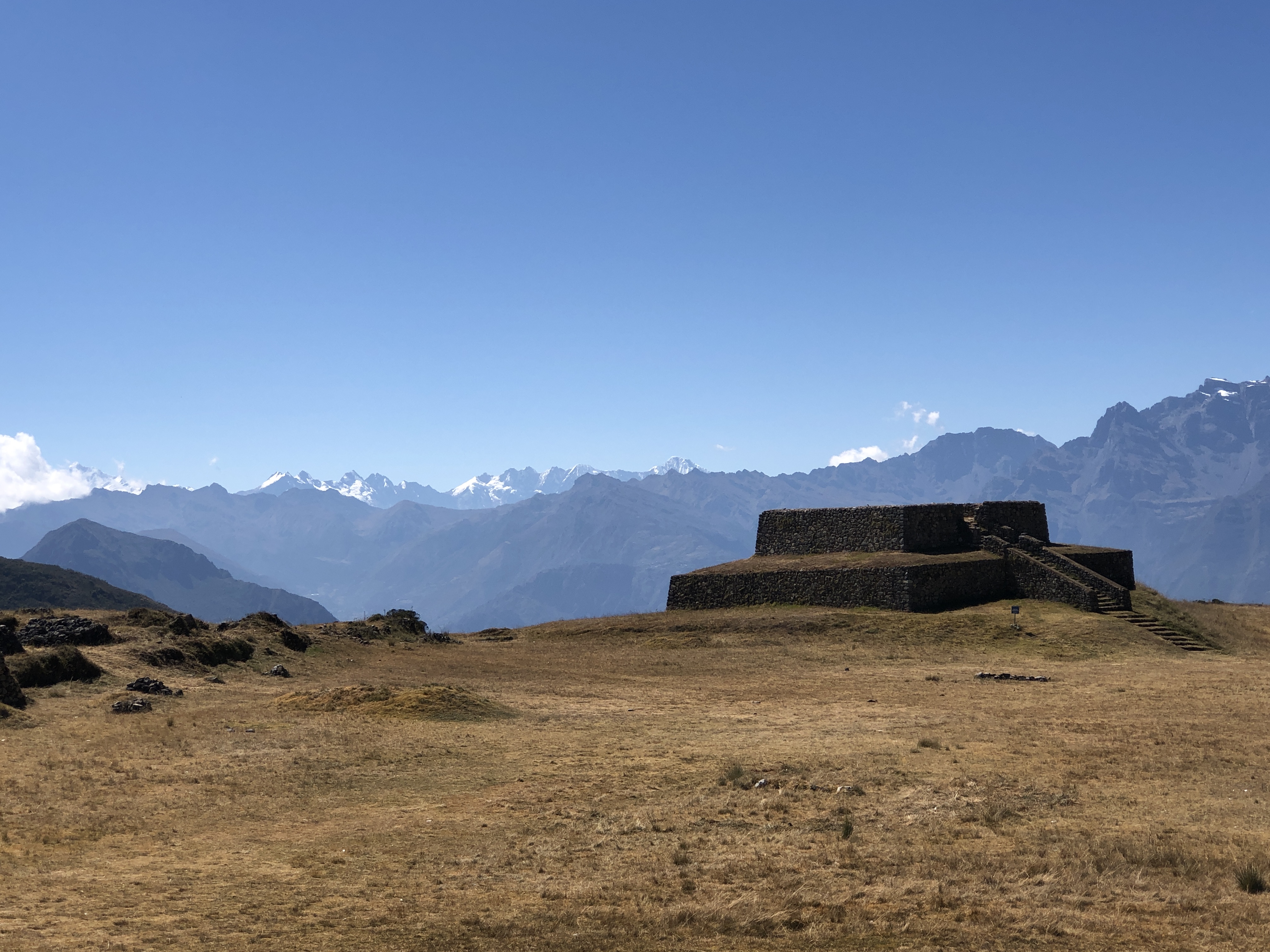 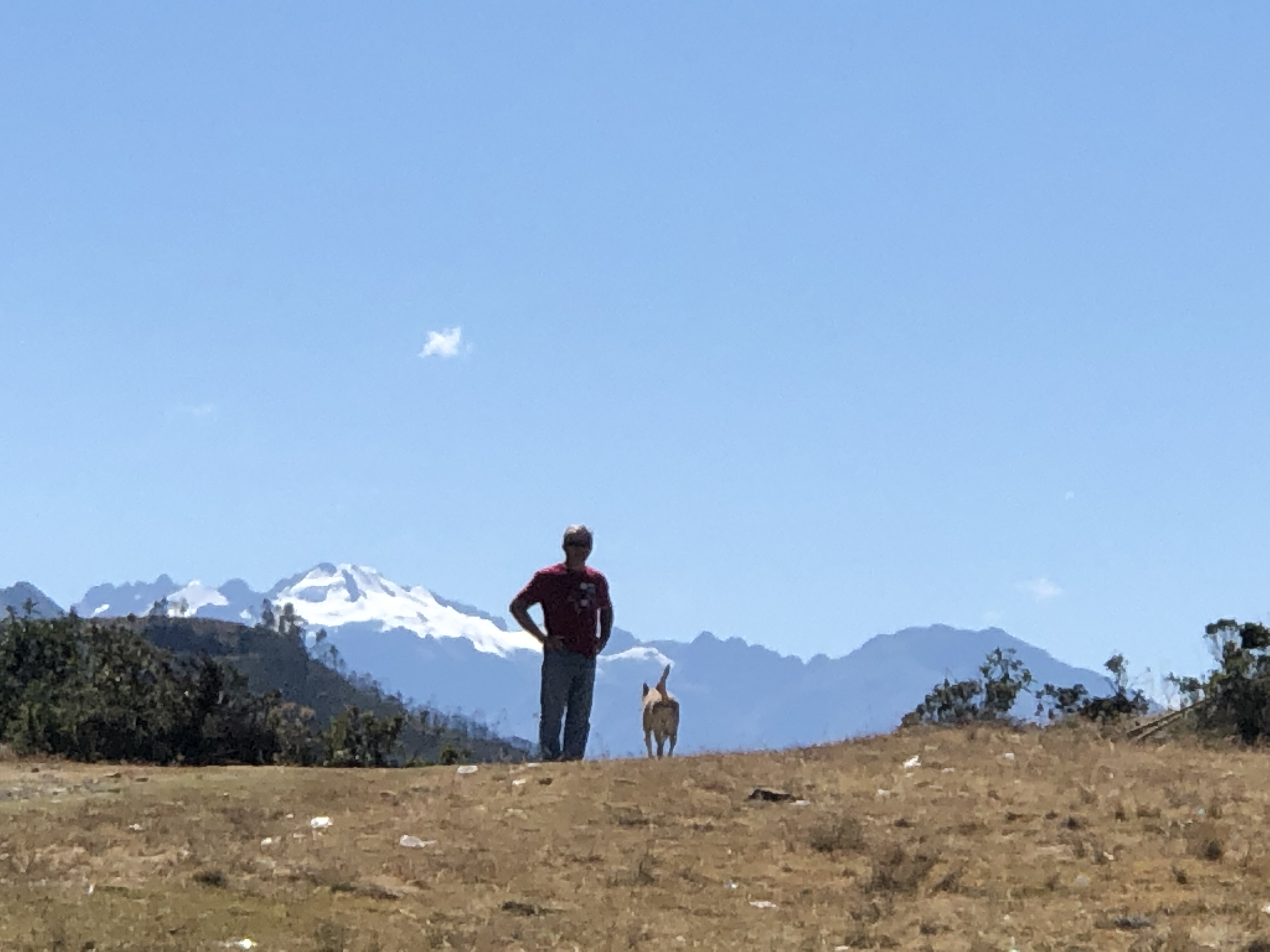 Continuing our Inca ruin exploring, we found our way to Vilcashuaman and the ruins in the center of town.  This town contains multiple ruins.  The central focus is a significant Inca temple which includes tunnels, storage areas and a throne.  It was used as a point of worship by the indigenous people long after the defeat of the Inca.  But at some point the Spanish missionaries ordered the people to build a Catholic church right on top of the temple.  Thus it remains as an interesting juxtaposition of the old and the new. 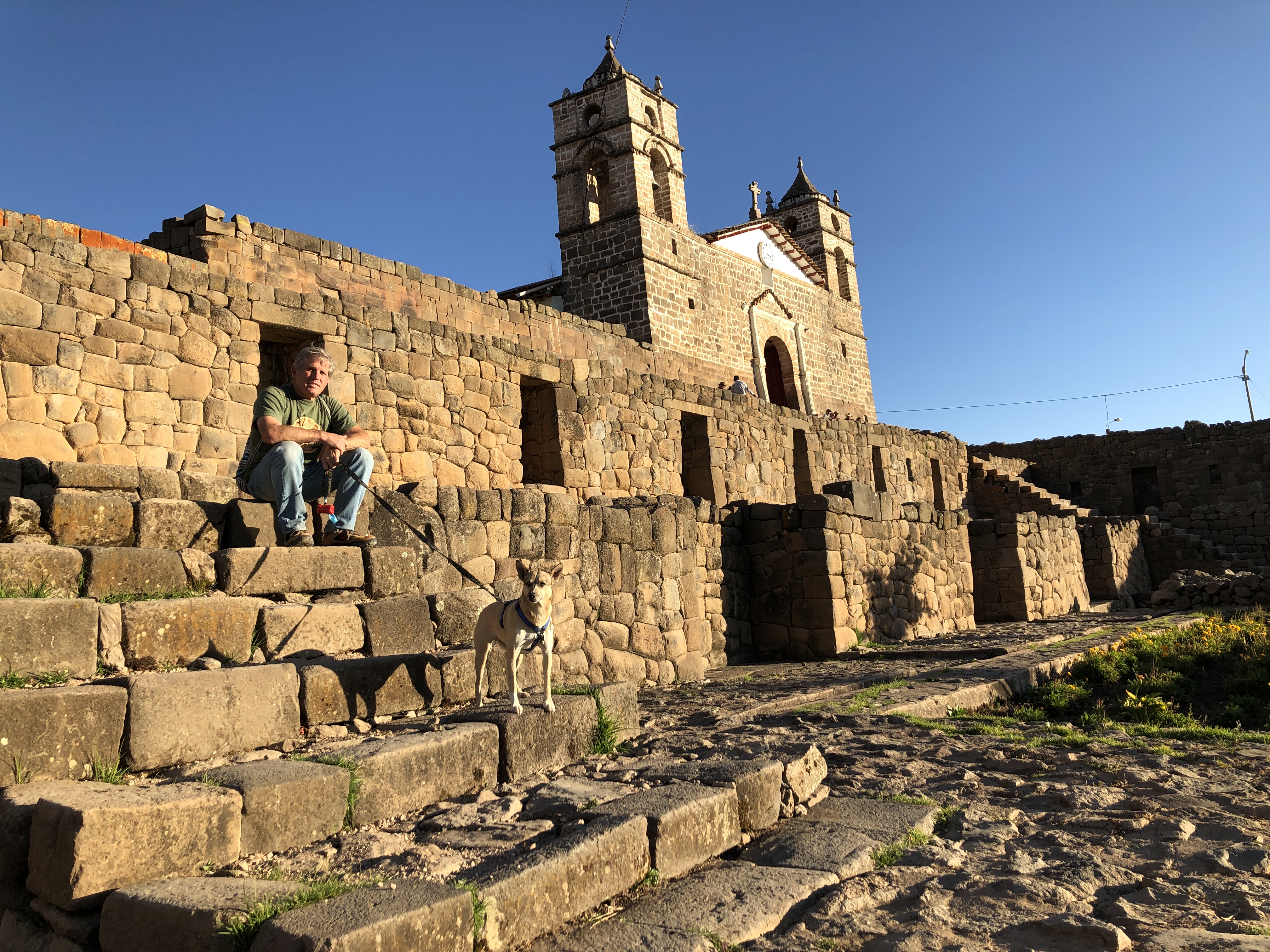 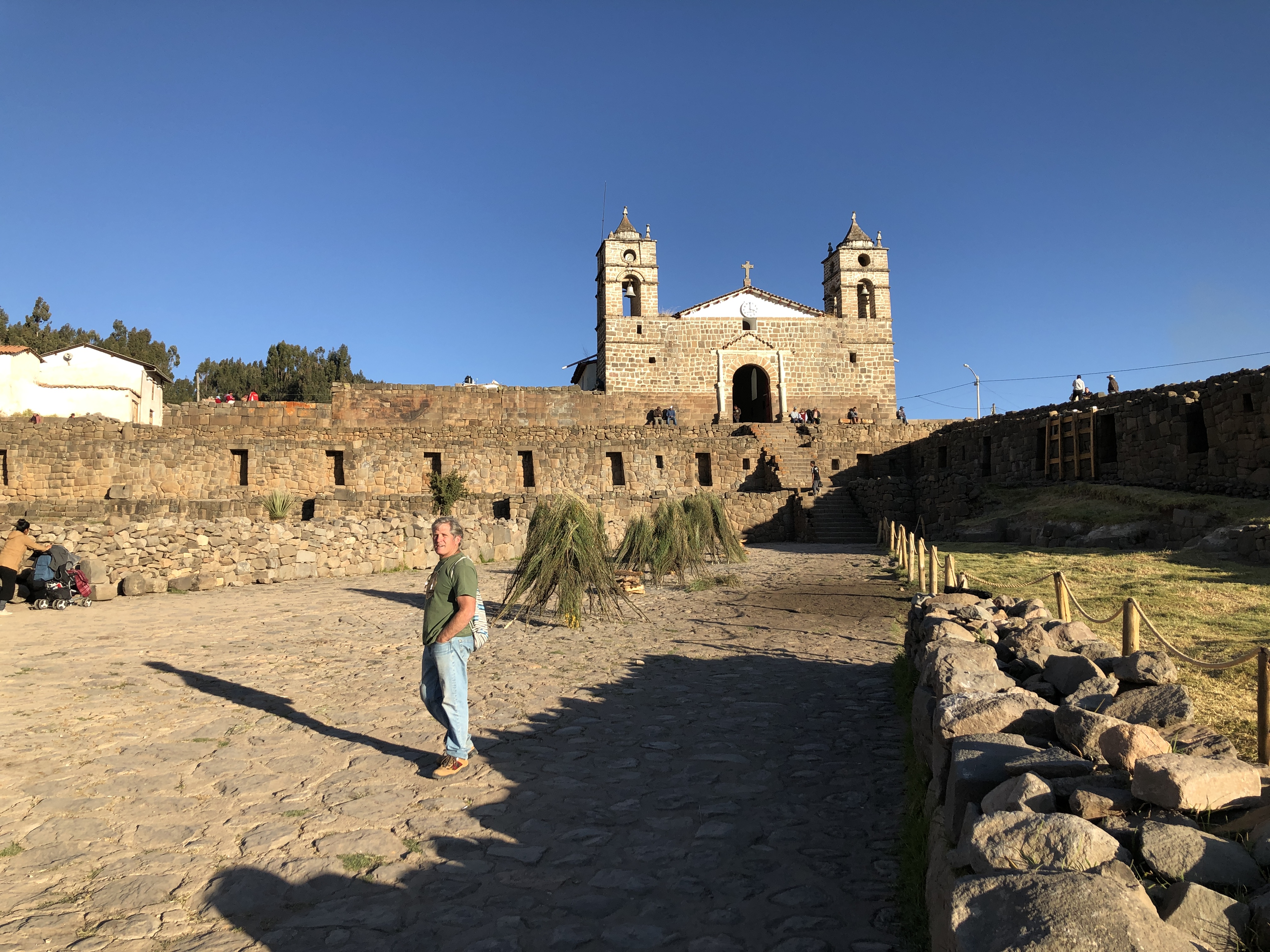 After a few days on these bumpy roads we were ready for a soak.  We located some hot springs that were about 20 miles off the highway.  We drove up and learned a hard lesson… many Peruvian hot springs are not really very hot.  They are lukewarm. While this is much warmer than the frigid shower water that most villagers use, it’s not really a hot spring.  After our disappointing soak, we encountered a broken taxi blocking the road.  His transmission wasn’t working.  So we attached it to the truck and towed the little wagon 20 dirt miles to the highway.  This included several river crossings and some treacherous switchbacks. 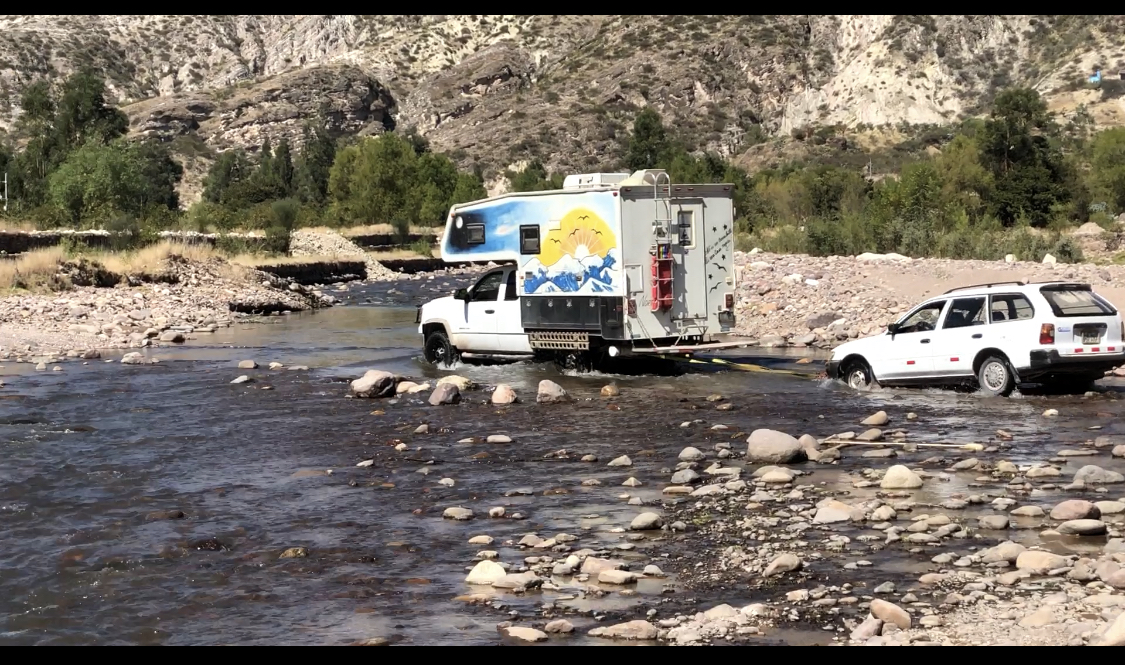 We were really beginning to climb in elevation and drop in temperature.  This area of the Andes is dry and rather flat.  It may be described as grasslands or high savannah.  Nica and Geneva found a horse that needed some water, staked out in the center of a large field.  The grateful horse enjoyed three buckets of water!

In a small grocery store, in the middle of nowhere we found a special American treat which we promptly enjoyed for dinner.  Don’t laugh, please!! 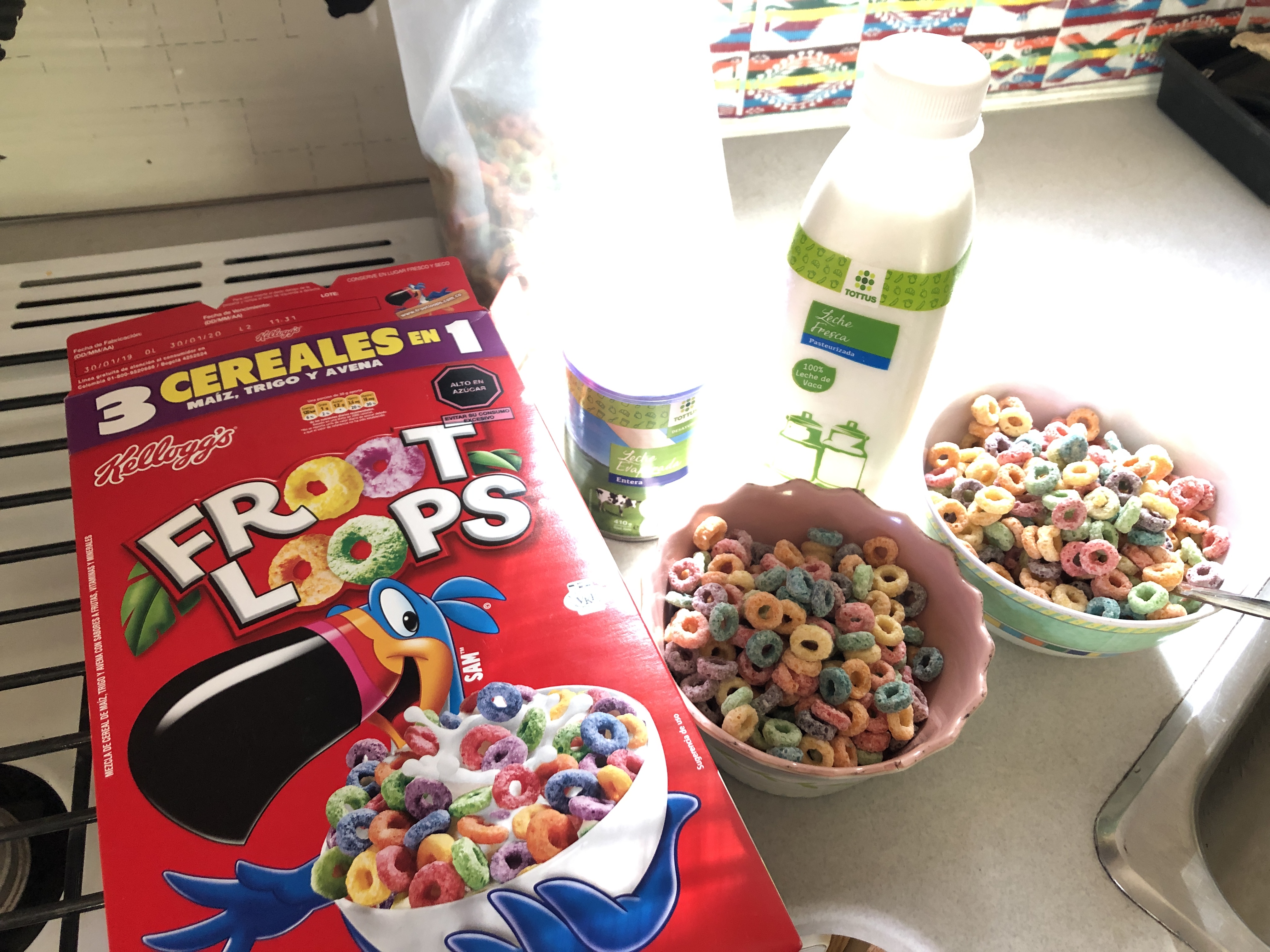 It was the perfect meal to enjoy with the sound of a rushing river nearby.  Our riverside campsite was large enough to let the dogs roam freely.  And there was a trail up the mountain so Mike and the dogs could hike up and take an overhead photo of our camper next to the muddy river!

Speaking of the dogs, Pacha is learning to be relaxed in the truck.  In this photo she snuck over Mike’s shoulder and delivered some gentle ear-kisses while he was driving.  Silly dog. ( we will feature her adoption story in a later post ) 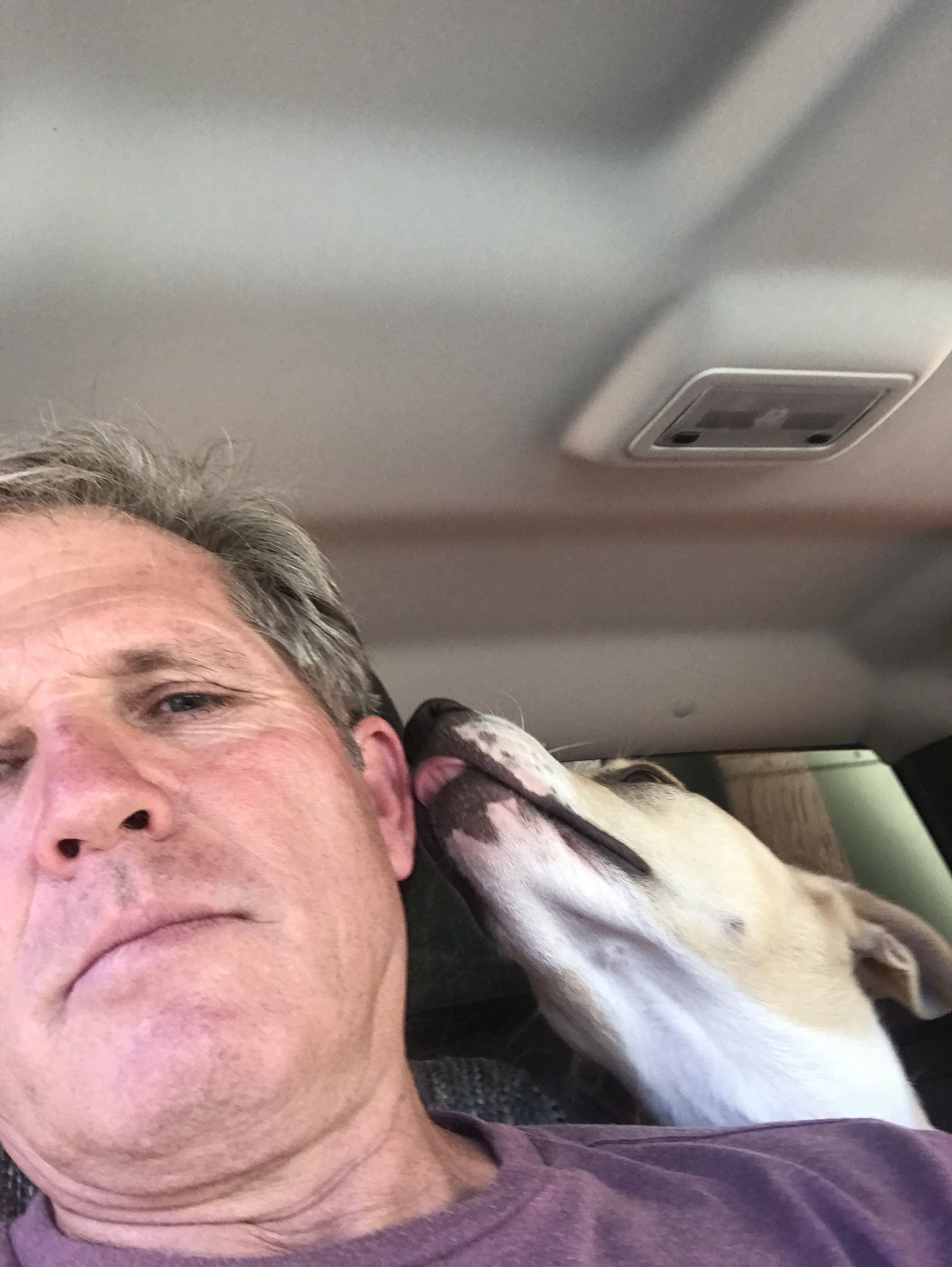 We continued to climb the Andes and located one of the oldest trout farms in Peru.  The cultivation of trout is a major industry for the country.  This farm introduced eggs in the 1930’s and has been producing trout since then.

Of course we enjoyed a delicious trout lunch in a nearby restaurant.  As we left the area we encountered several fields of the biggest export vegetable of Peru.  Do you know what these are?

If you guessed artichoke, you are right.  Peru is a major exporter of artichokes worldwide.  Although we seldom see it on a menu in Peru, we do see artichoke in cans at the grocery store occasionally.

Finally it was time to get serious about climbing the Andes in the truck camper.   We began in the grasslands, and climbed a slow and steady route into the mountains.  The road turned to messy, sticky mud as we entered a 75 mile stretch of road construction. 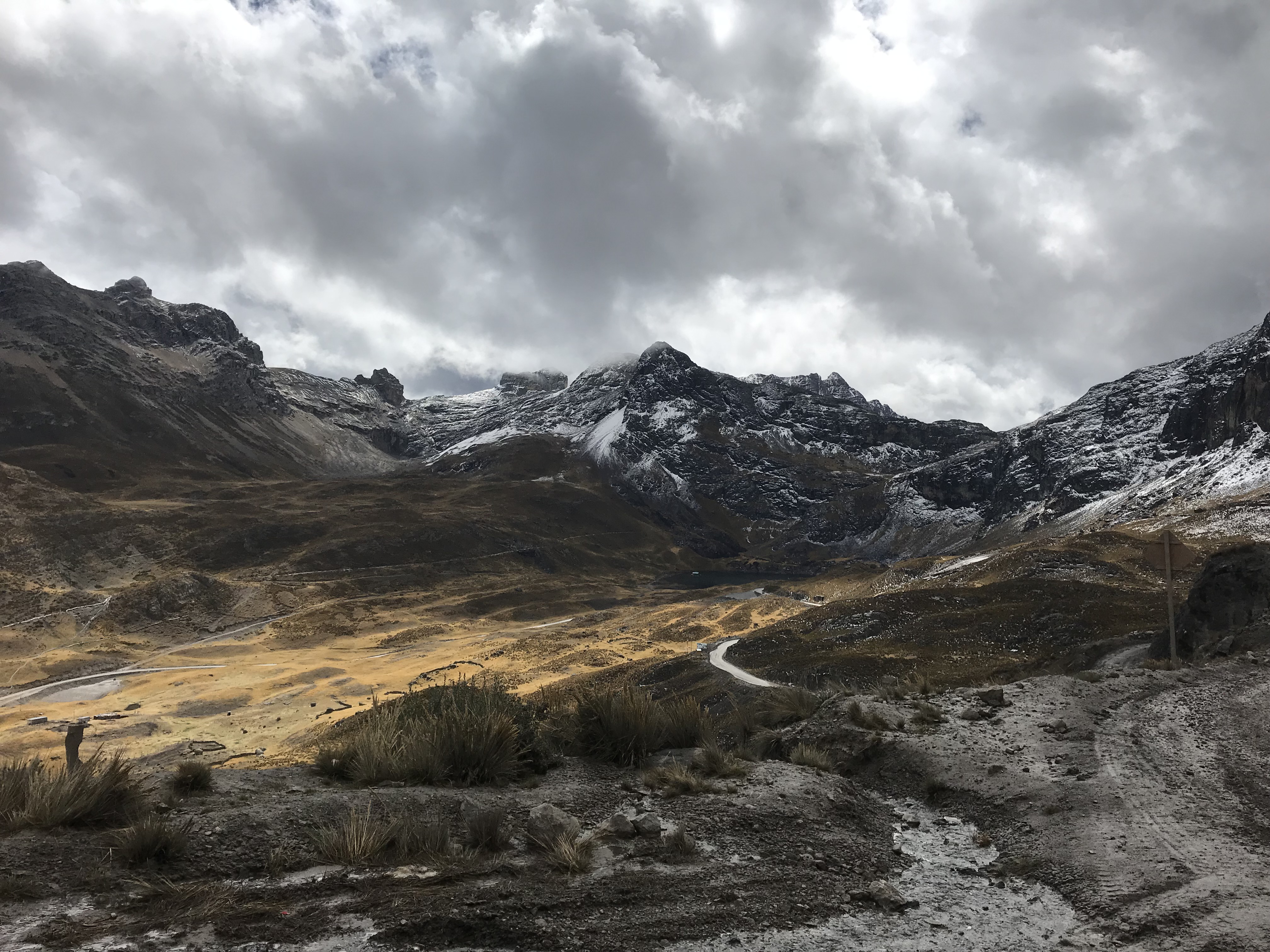 As we crossed through the mountain passes we encountered rain, then snow, then hail.  All of which made the road even muddier and the views even more dramatic. 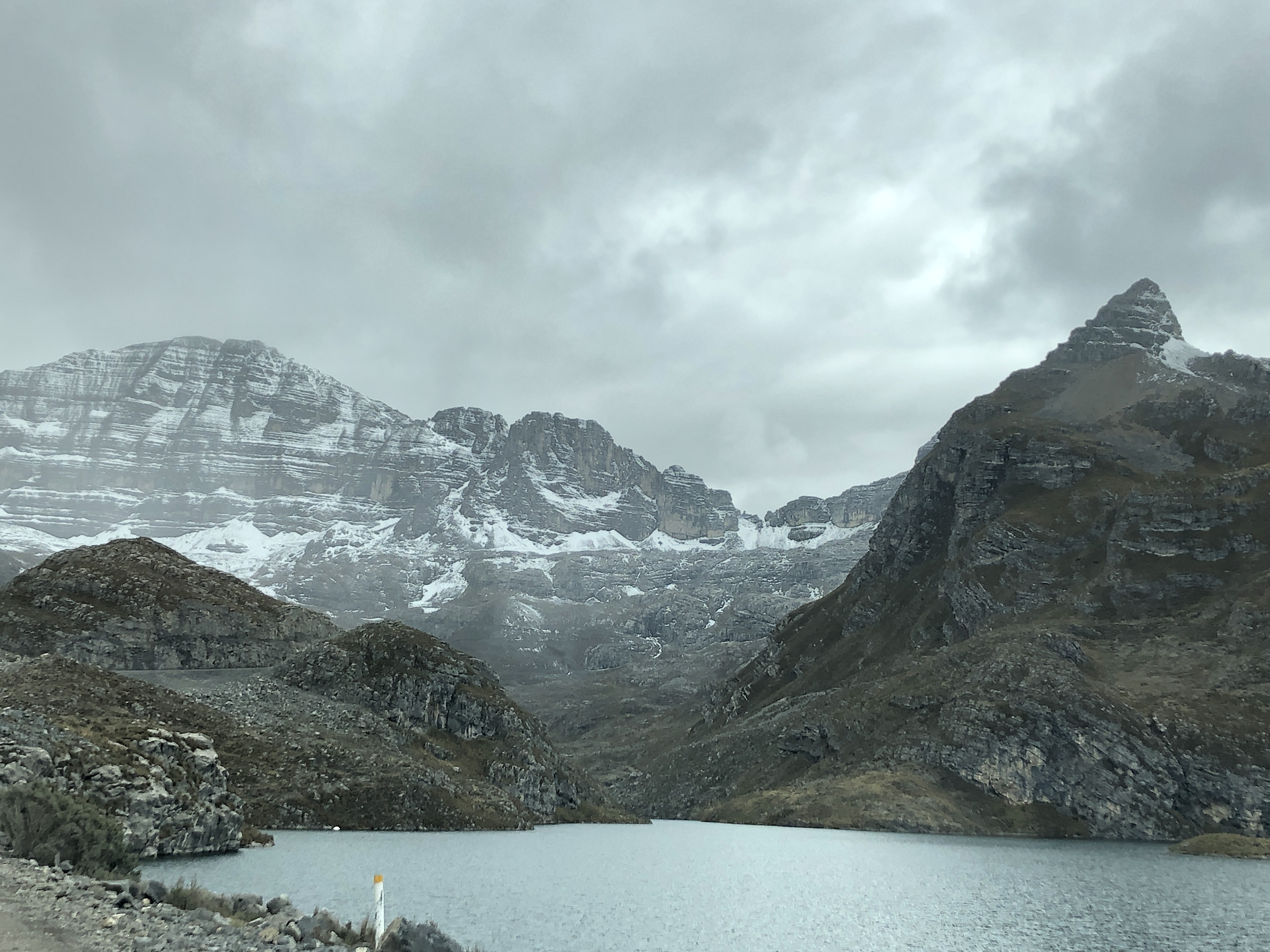 But not to be overlooked is the elevation of this region.  There were certainly a few times we felt the effects of being at this height.  Headache, racing heart, eye pressure, joint pain and even stomach issues plagued us during this section of the drive.  I guess our bodies were not ready for 16,000 feet! 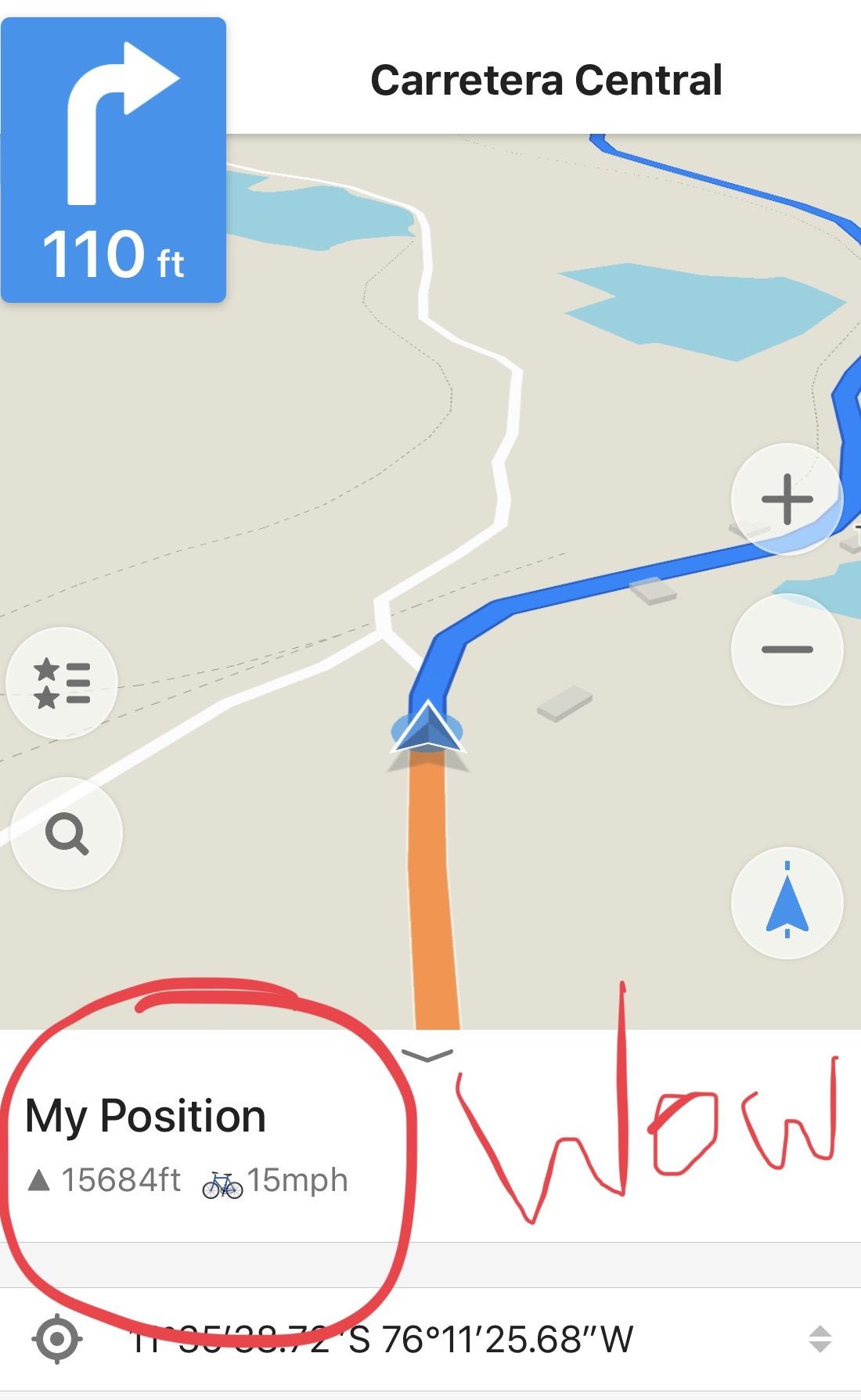 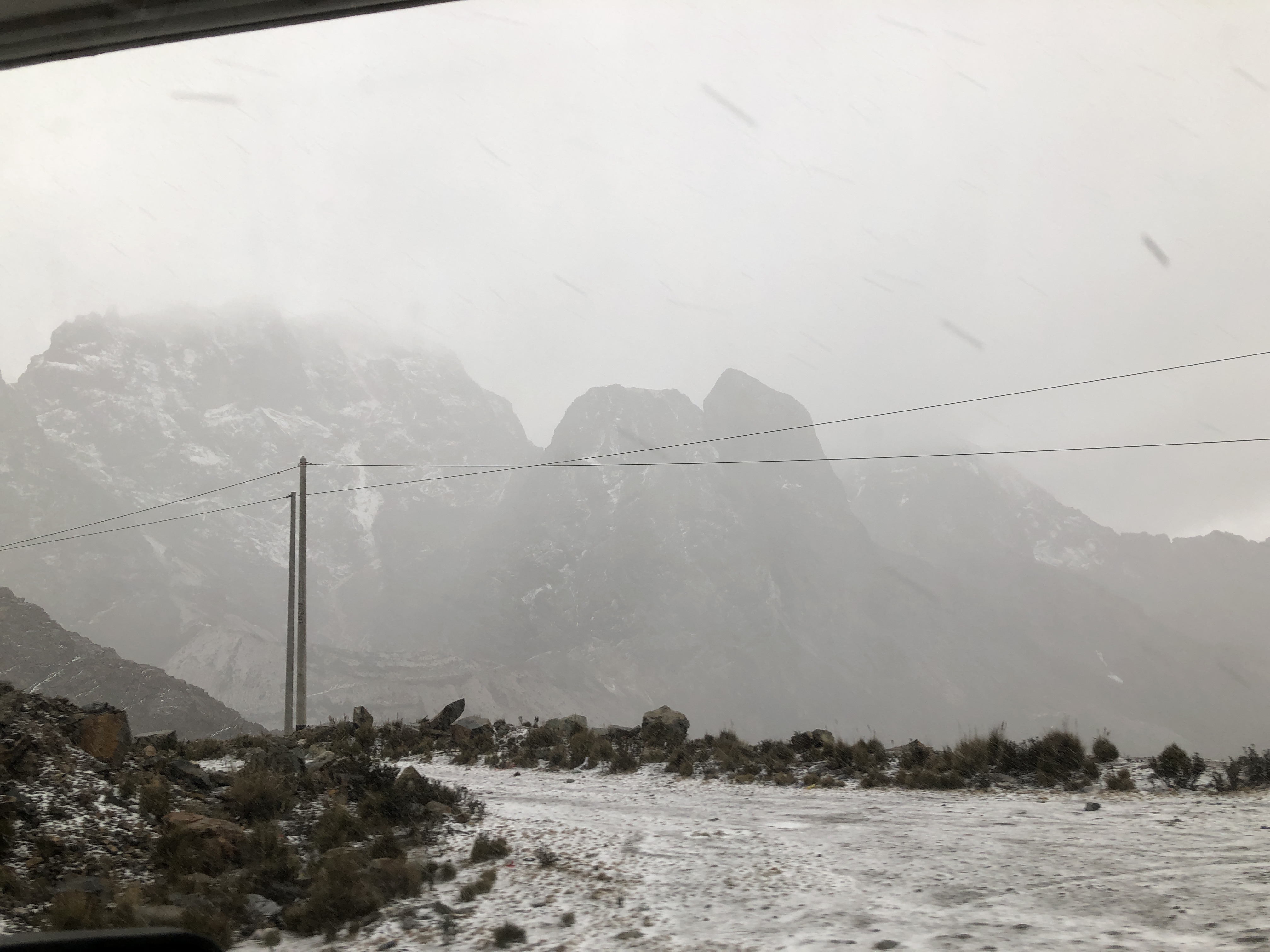 We also encountered a few sobering scenes of the mining camps in these beautiful mountains.  There are some fantastic movies out about the impact of mining in Peru.  The ravages of these foreign companies,  as they slowly destroy the Andes, was very evident on this section of road.  Later we encountered a protest being staged in a small city, regarding the unfulfilled promises from the mining interests in Peru. 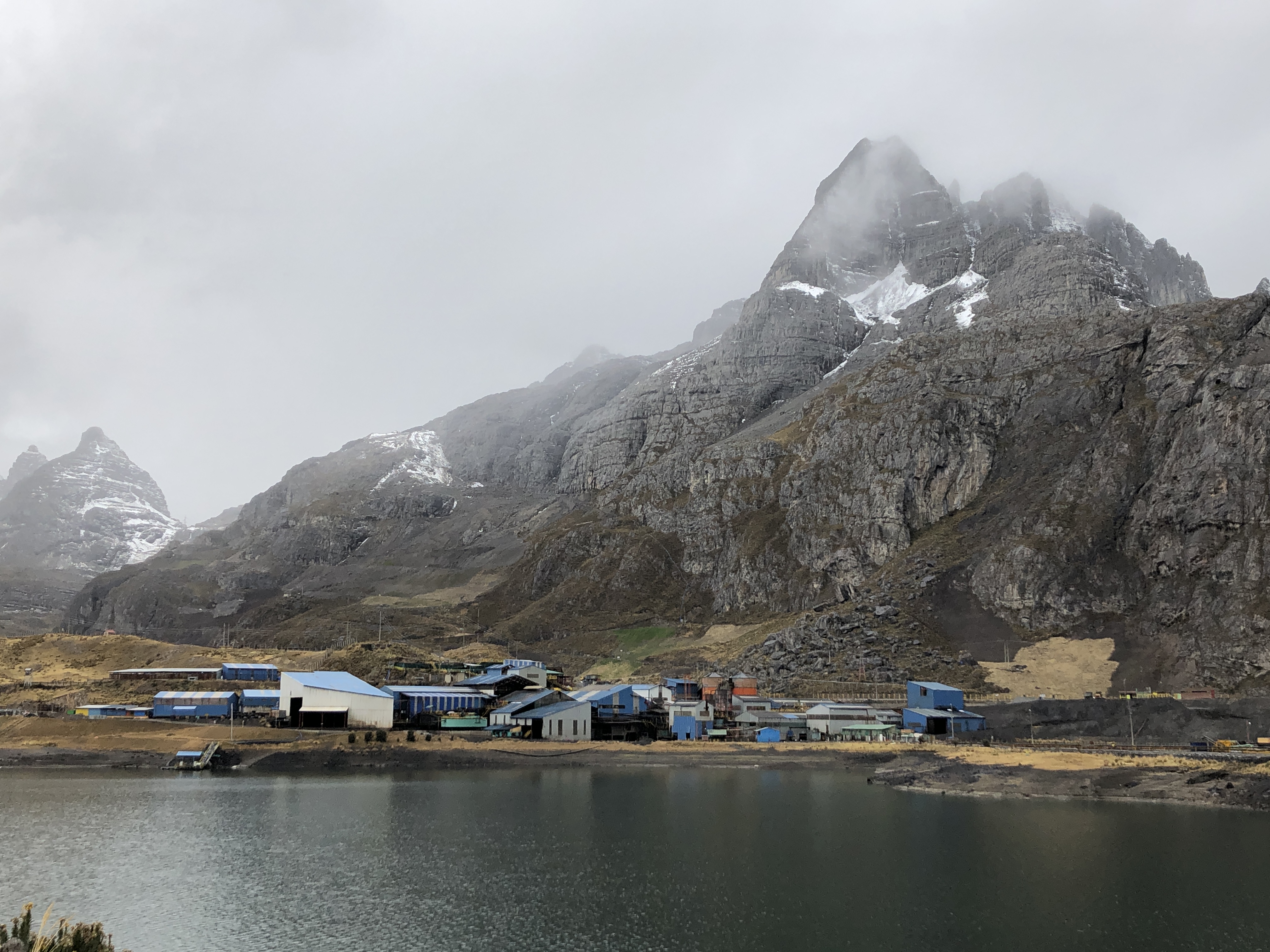 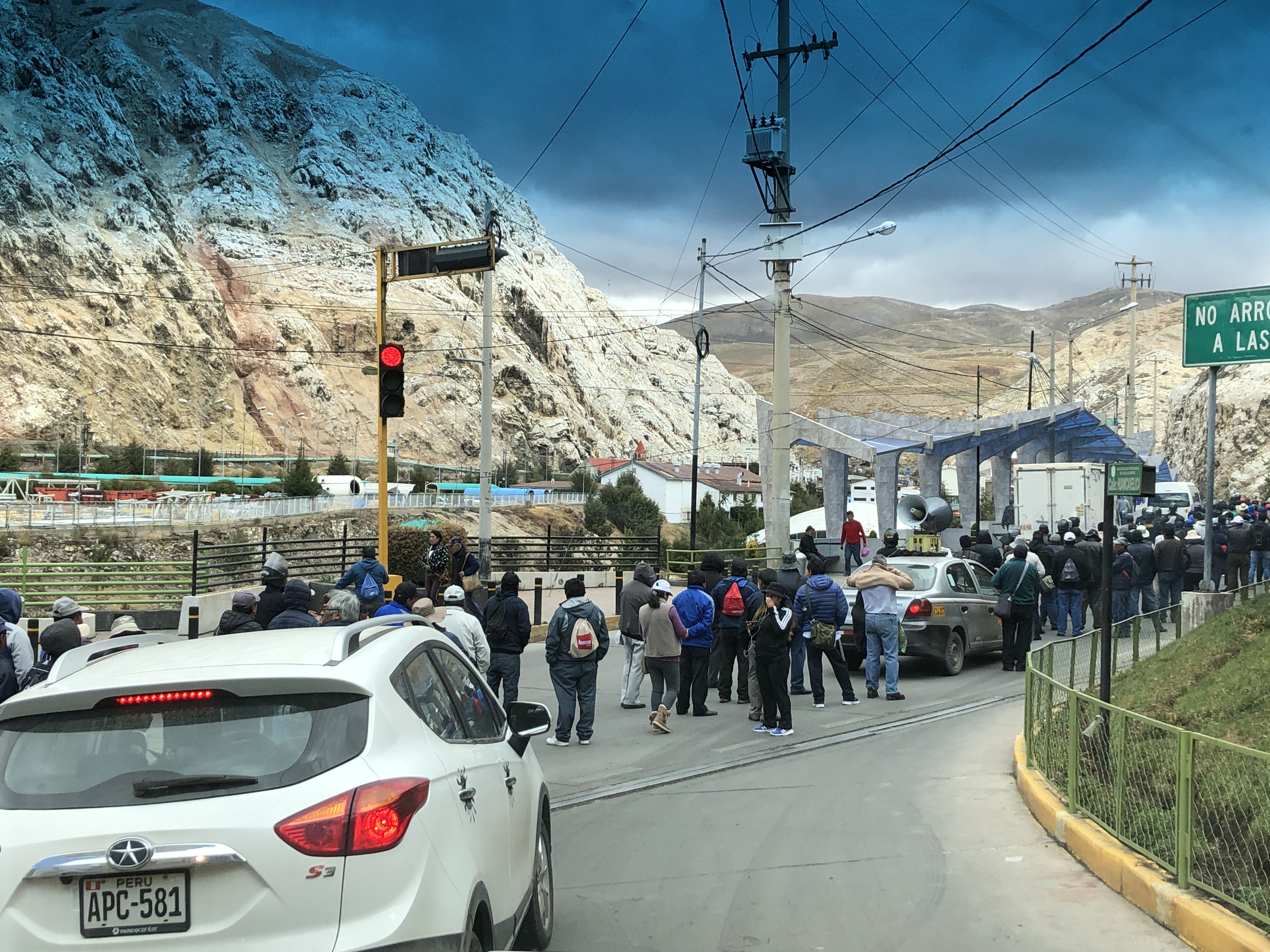 After we crossed out of this section of the Andes, our elevation sickness subsided and we found a lovely campsite in the trees.  And then we had a chance to really see how muddy the truck and camper were! 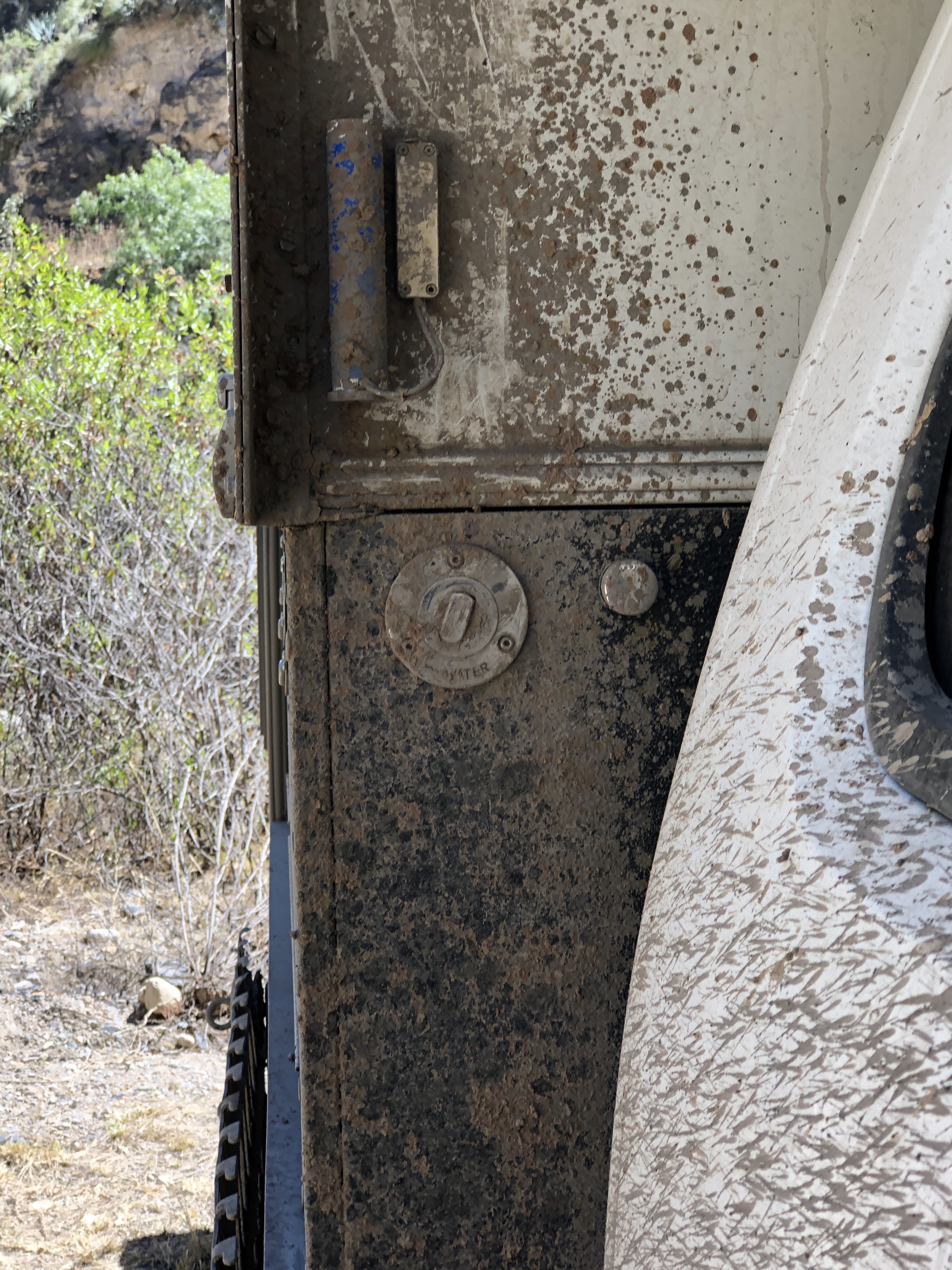 Our next stop was a car wash on the outskirts of a small town.  Nica and I met the locals while Mike helped with the car wash. 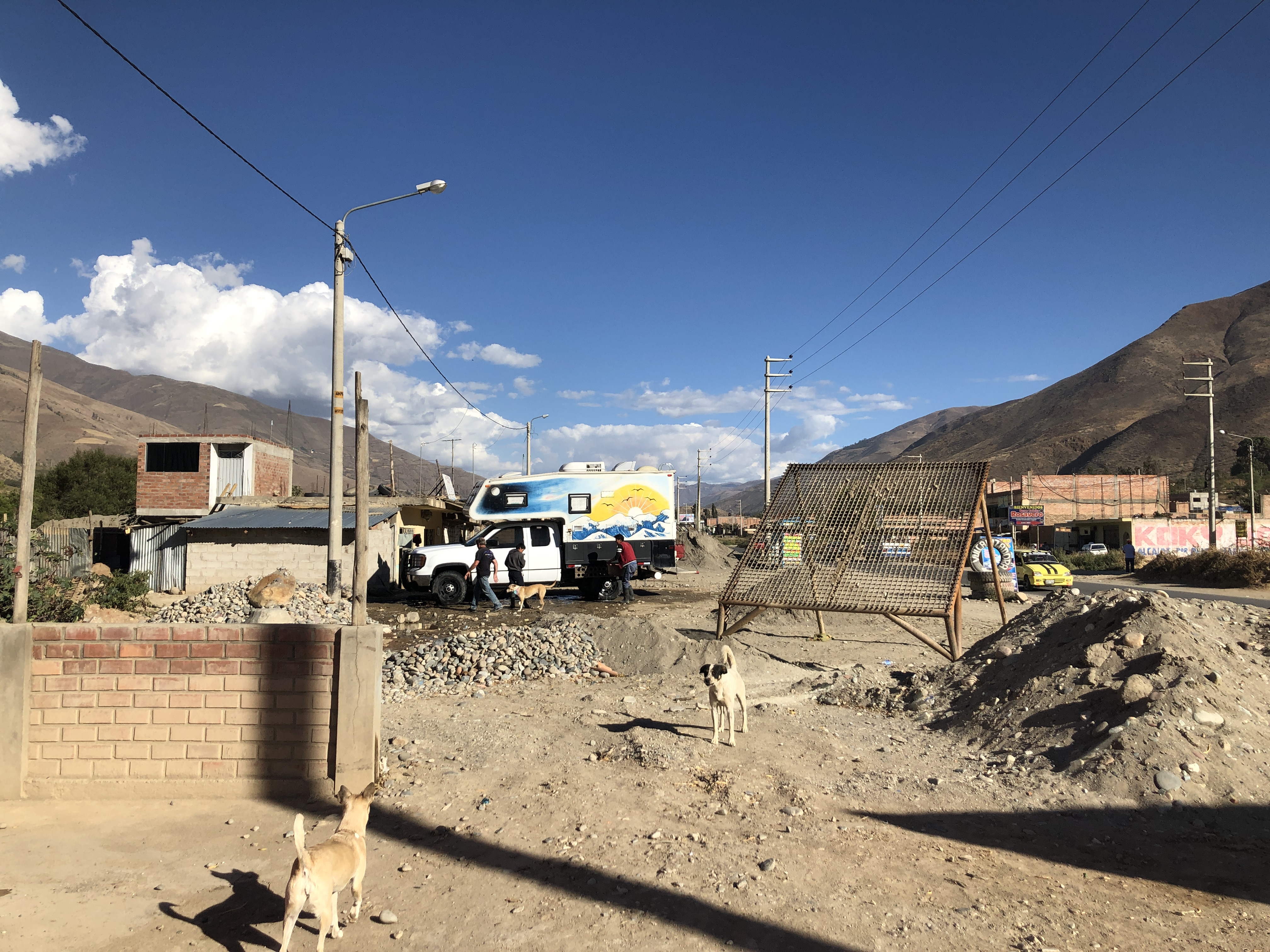 Now that we have passed through this portion of the Andes, we are going to head to the edge of the Amazon.  Join us as the journey continues!

One thought on “Peru- Inca ruins, trout and Andean mining in the central highlands”