Most of the readers of this blog have probably attended a county fair at one time or another.  You may remember it as the kind of event where folks are showing their animals, handcrafts and food products in a competition for ribbons, and wandering through booths looking at special products,  trying their luck at random games of chance and even eating that particular type of cuisine known as “fair food”.  Some fairs even offer cheap or free concerts in the evening, right?

We were fortunate enough to stumble upon a feria (a regional fair) here in Peru on a recent weekend.  We enjoyed several hours wandering around and watching the competitions, checking out the booths and eating the fair food.  We skipped the games and left before the really loud, free concert began.

First I will apologize, as I did not get photos of the booths.  But they were all filled with people and it felt rather voyeuristic to take their photos while the browsed, played and shopped.  In the background of this photo (and a few others), you can see the line up of booths.   These two photos are a vendor of the pollera, the traditional velvet, embroidered skirts that you see the women wearing in this story. 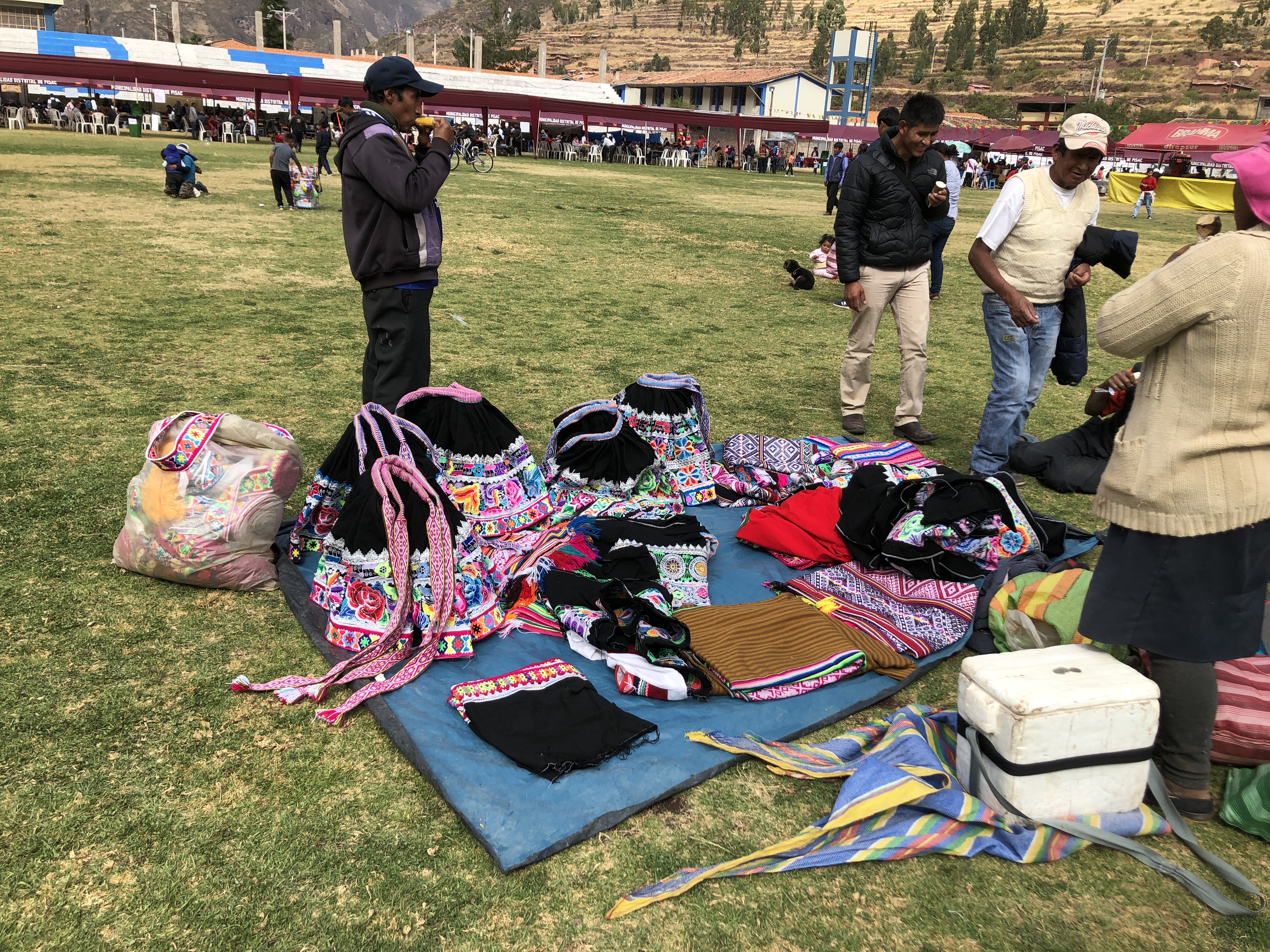 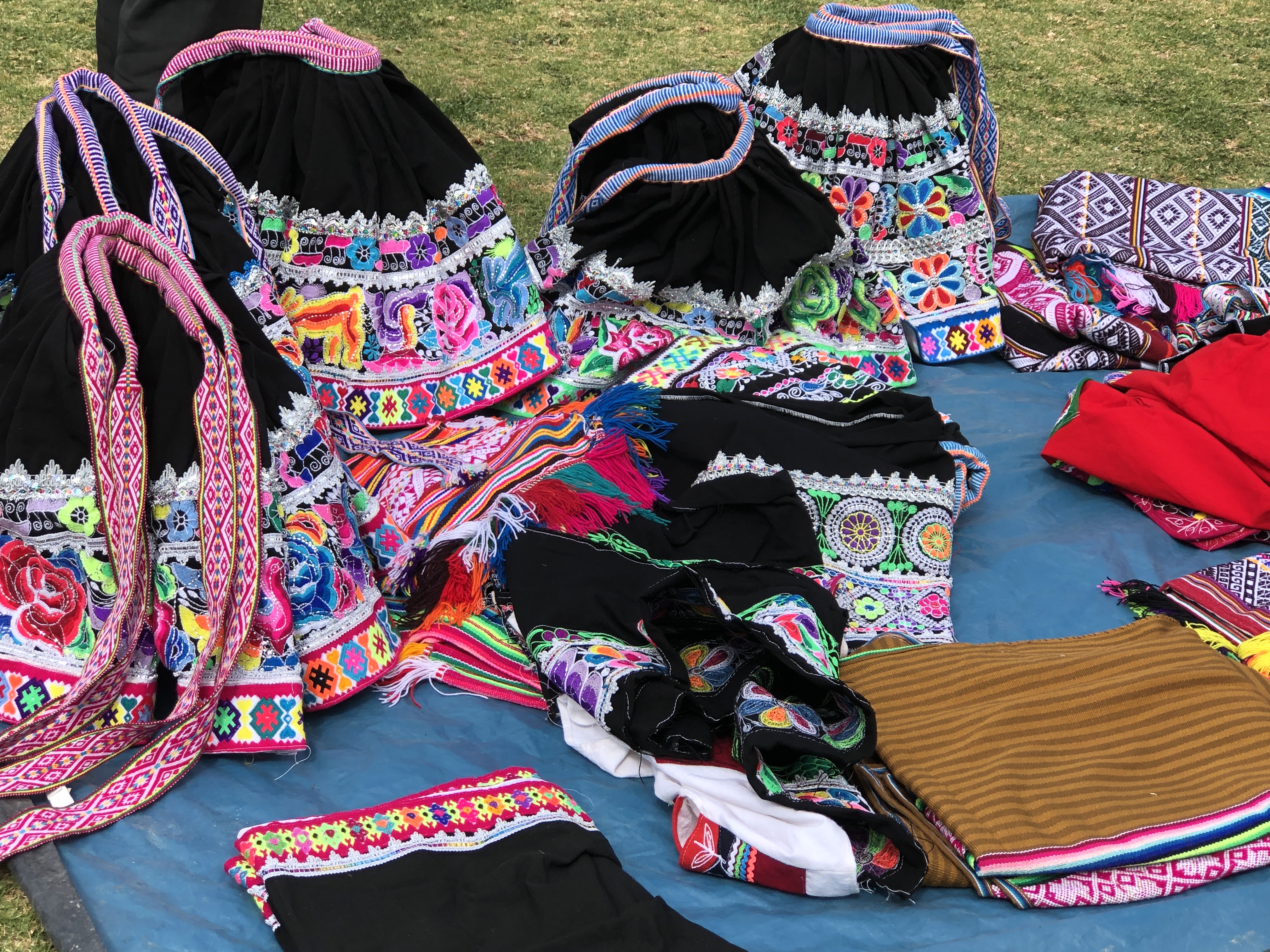 From there we walked across the grassy arena to join the folks watching the alpaca judging event. In the photos and videos, you will notice that there is a large and noisy crowd gathered for this important event.

There seemed to be categories for each animal, divided by age of animal and possibly other features.  The judge was very thorough in his review of each contestant.   The head judge is the man in the tan vest and dark hat. He has two assistants in the ring with him. 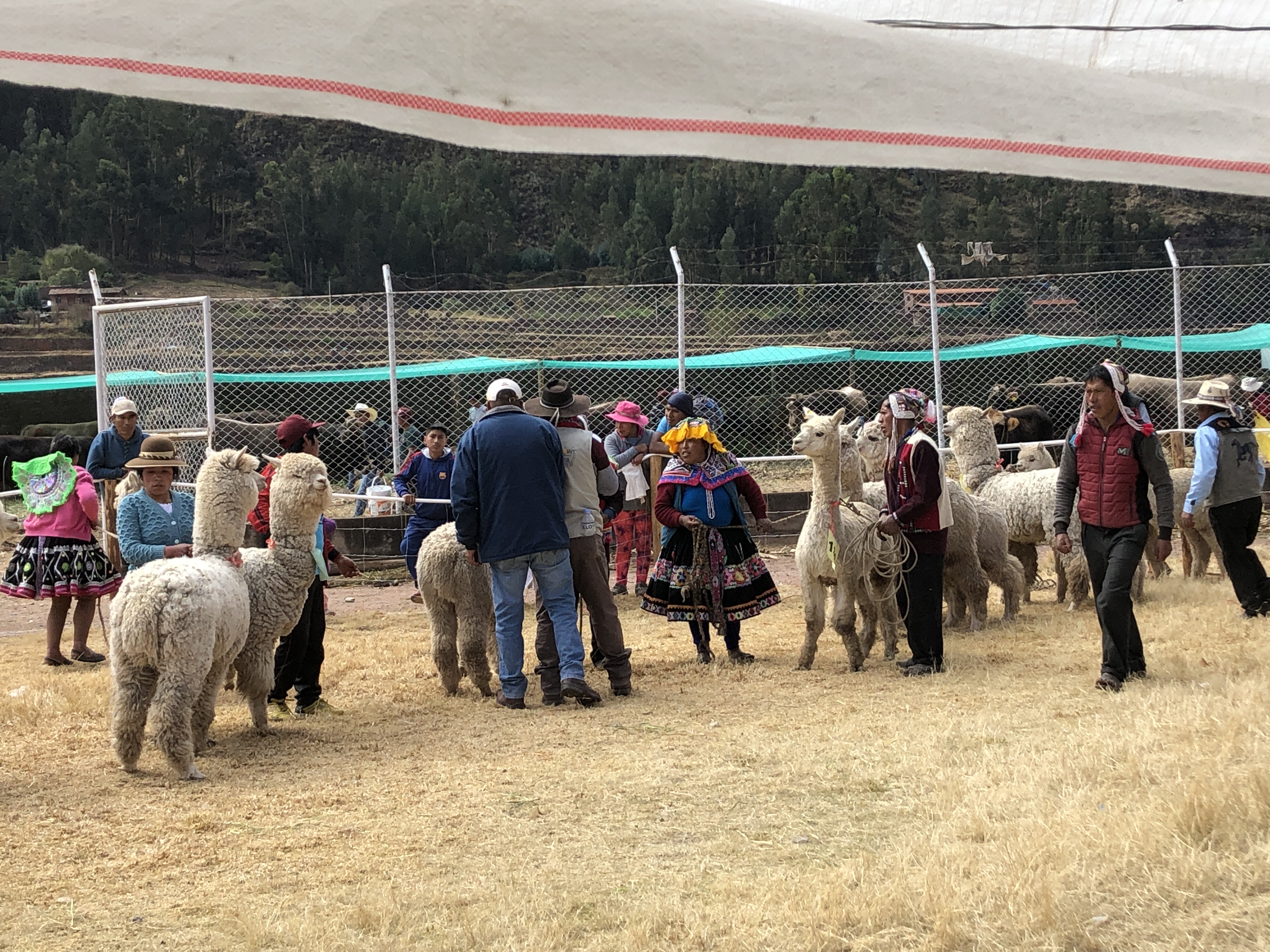 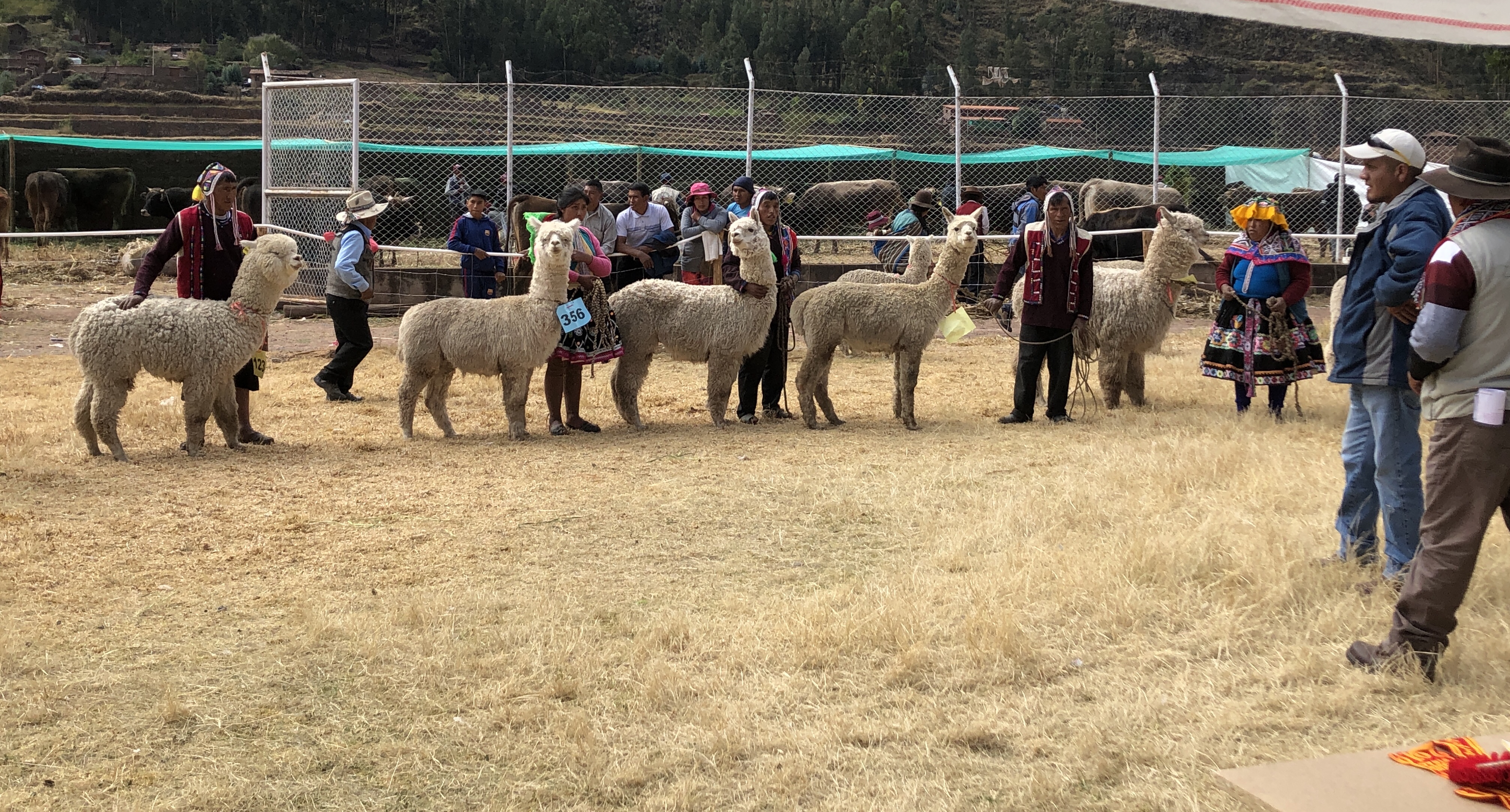 The competition was tough and some animals were ushered out of the ring right away.  But at the end of each round there was at least one animal, and one handler left standing with the judge.  They were very proud to receive their ribbon and move to another part of the ring for photos!  The champions will wear a sash. 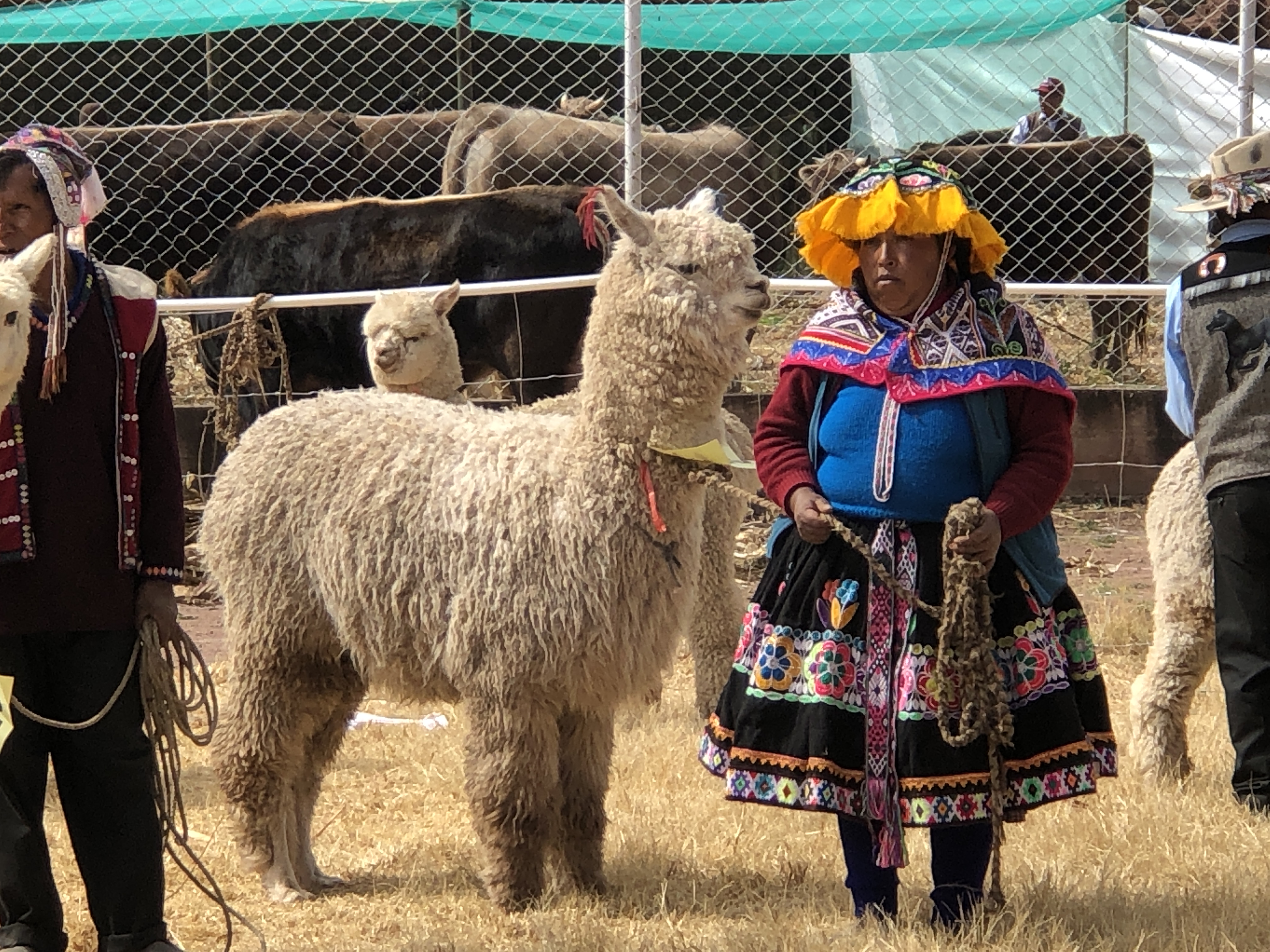 The finalist for this alpaca category

After the alpaca judging we wandered through the animal pens to observe other handlers with their prize animals for competition.  This included steer, goats, sheep, roosters, llamas and possibly ducks (or maybe they were just wandering around).  It was a cacophony of animal noises, children playing and families chatting.

This led us to the tables of food products being shown by various families.  First we saw a table covered with beautiful and colorful corn varieties. 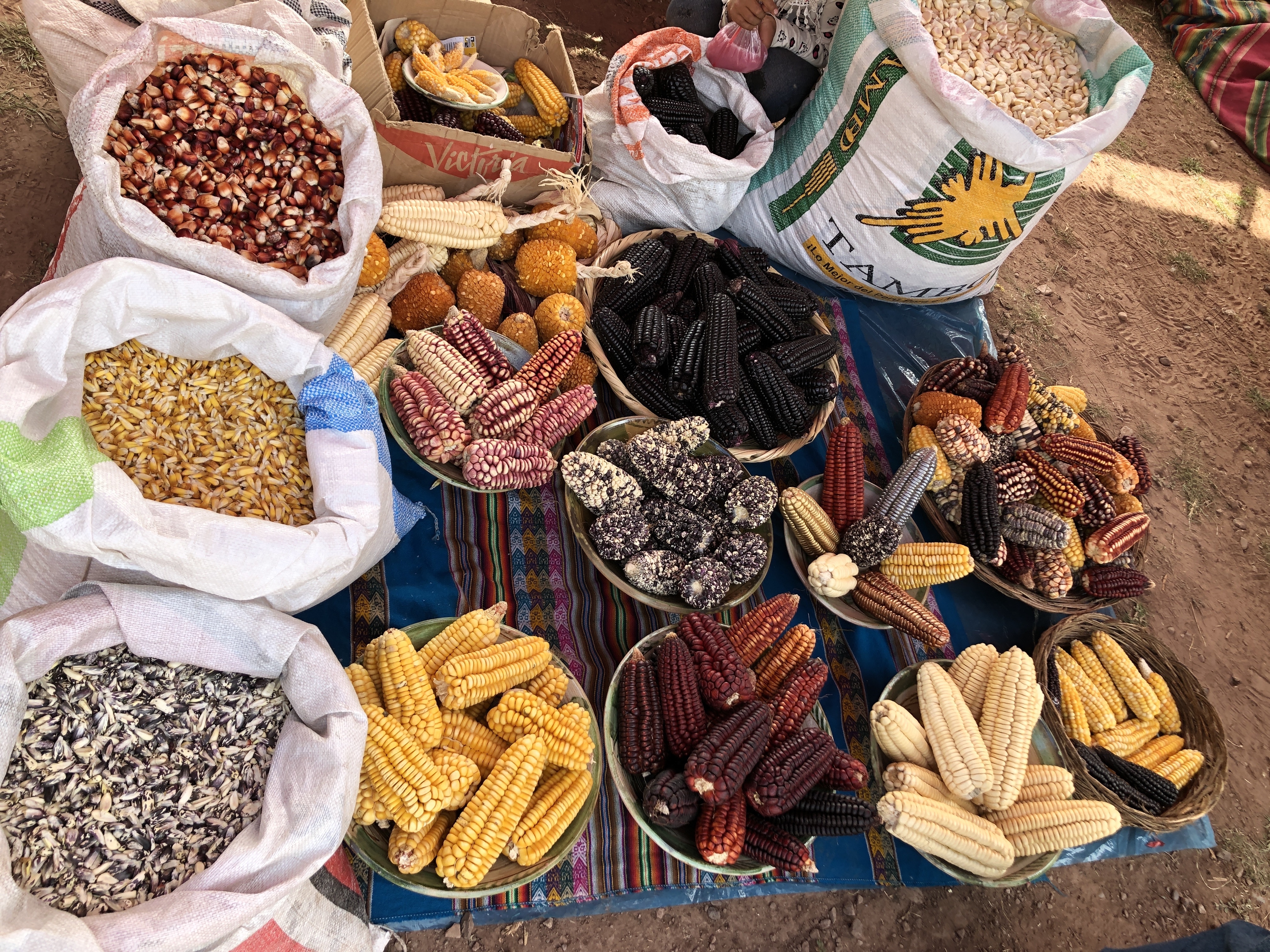 Then we encountered the potato section of the event.  If you have ever read about Peruvian potatoes, then you know they take them very seriously.  It is said that there are over 3,800 varieties of common potatoes, and even more specialty varieties taking the total to over 4,000!  Potatoes grow well in most of the soil and climates of Peru and their is evidence that they have been cultivated here since far before the Inca time period.

In this display each type of potato was grouped and then labeled with its Spanish name and its traditional Quechua name. 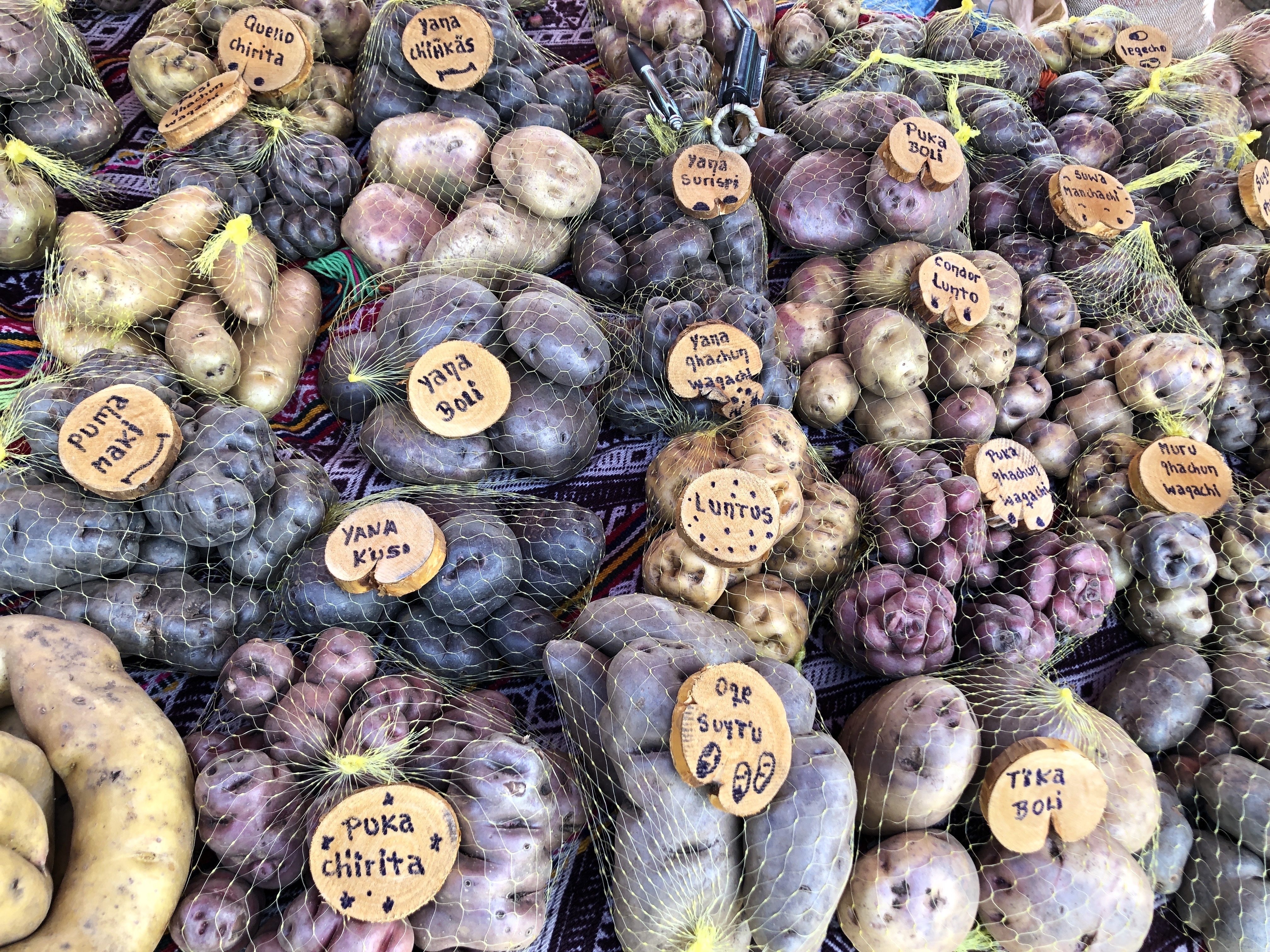 Some displays merely had grouped the varieties of beautiful potatoes and displayed them on tables or fabric on the ground. 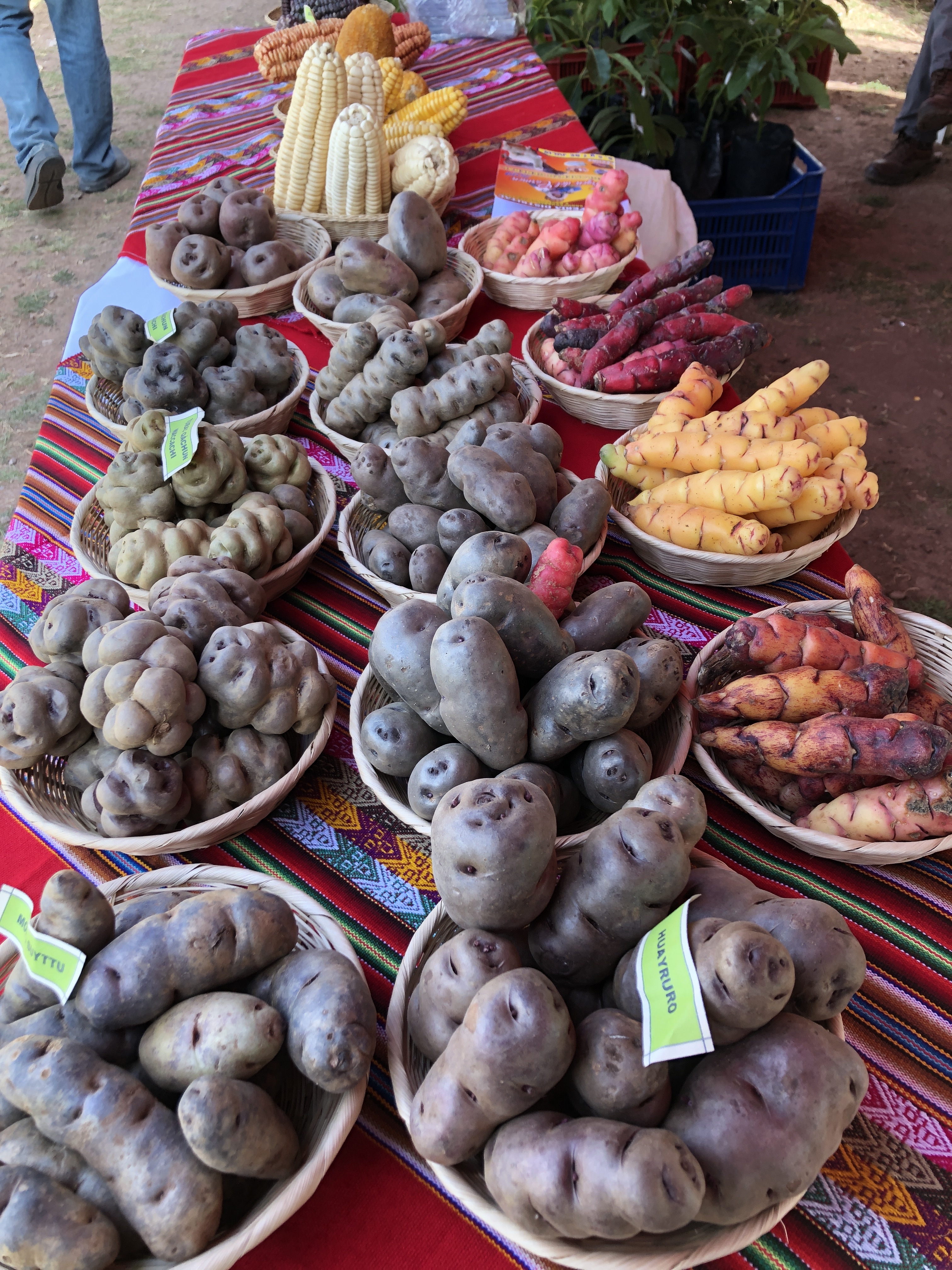 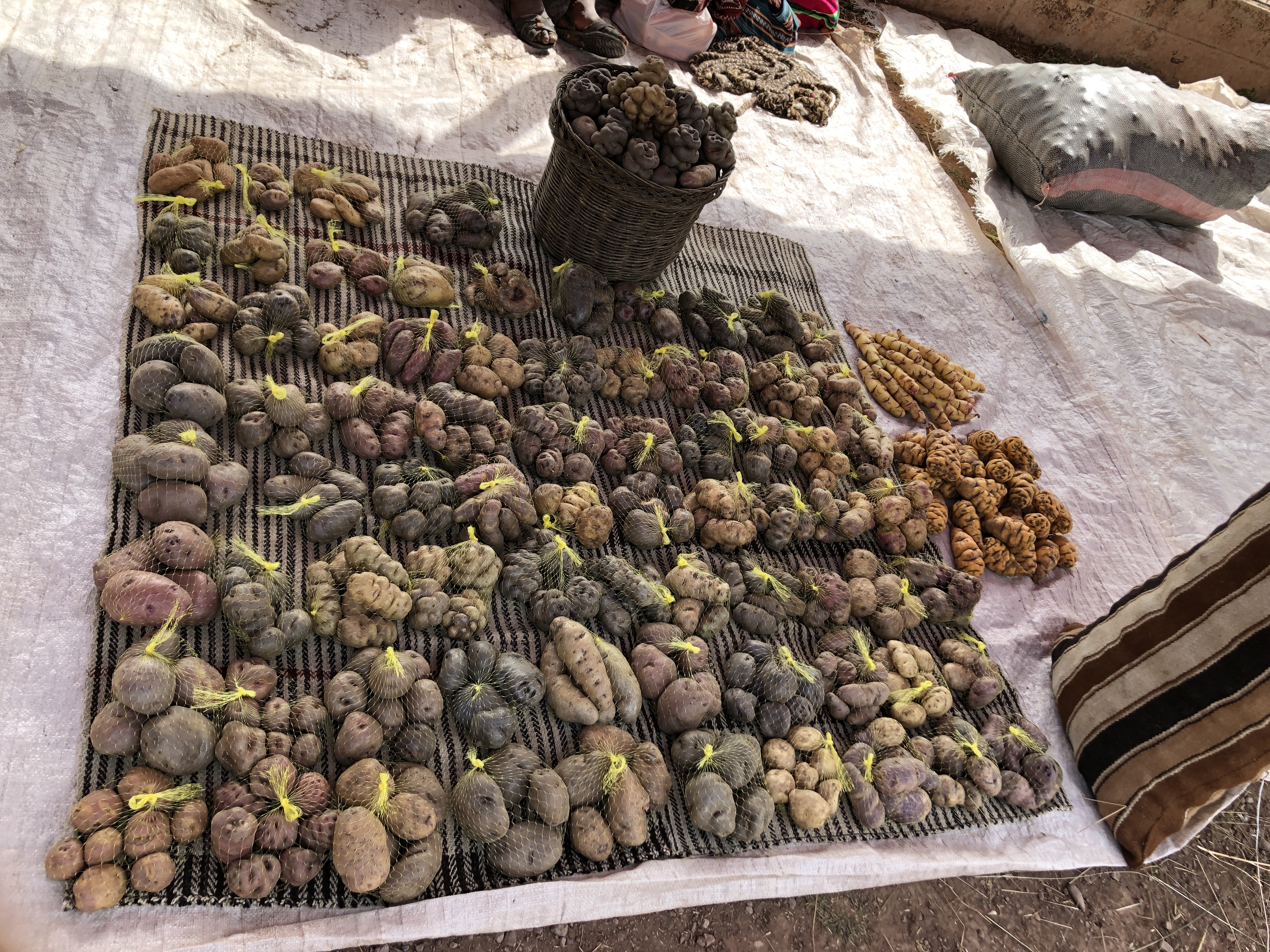 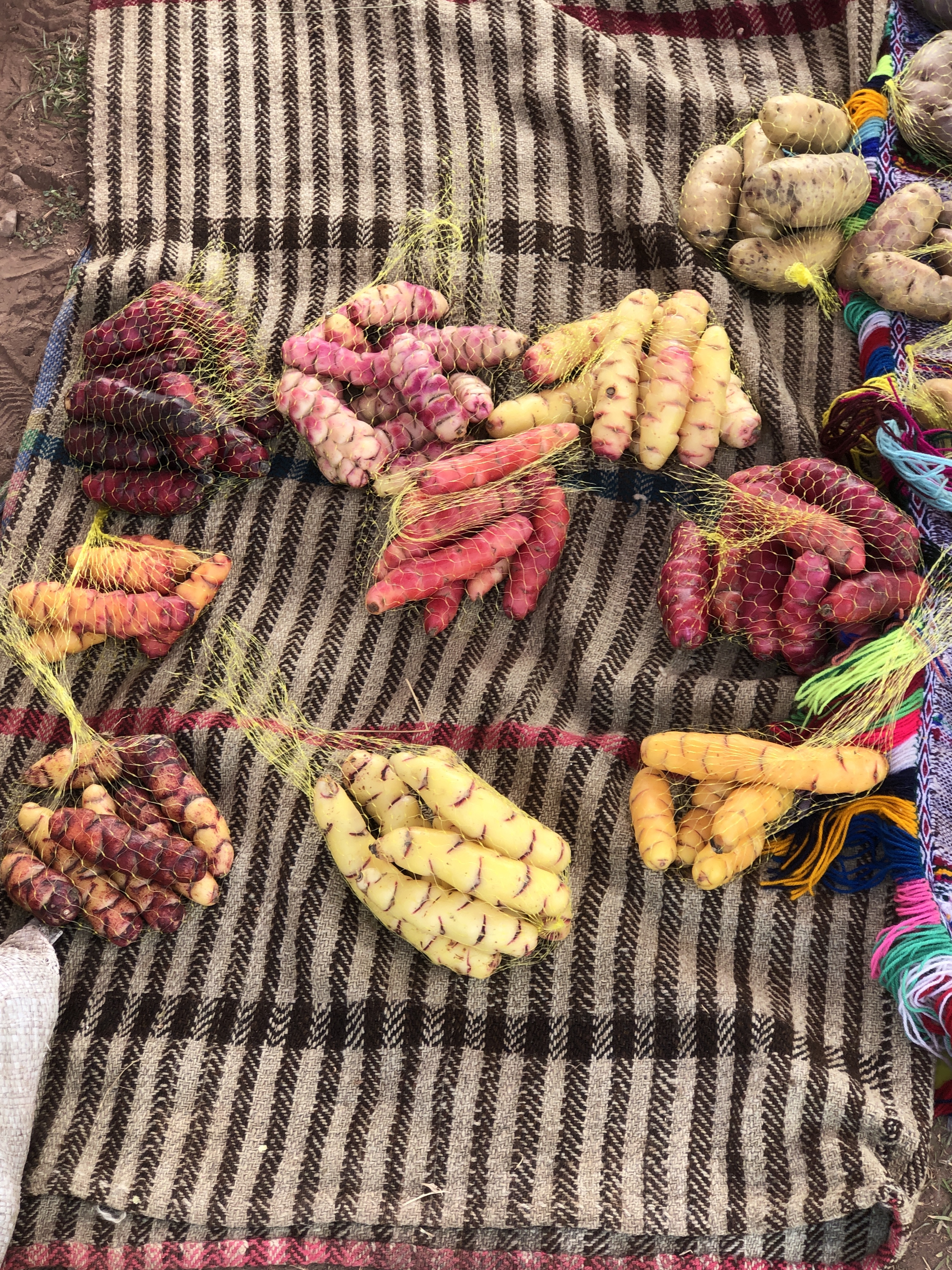 We looked across the field and noticed a crowd of people around some tables in the center.  So we went over to take a look.  One of the advantages to being an American gringa in Peru is that I can usually see right over the crowd (LOL) and it worked to my advantage here. 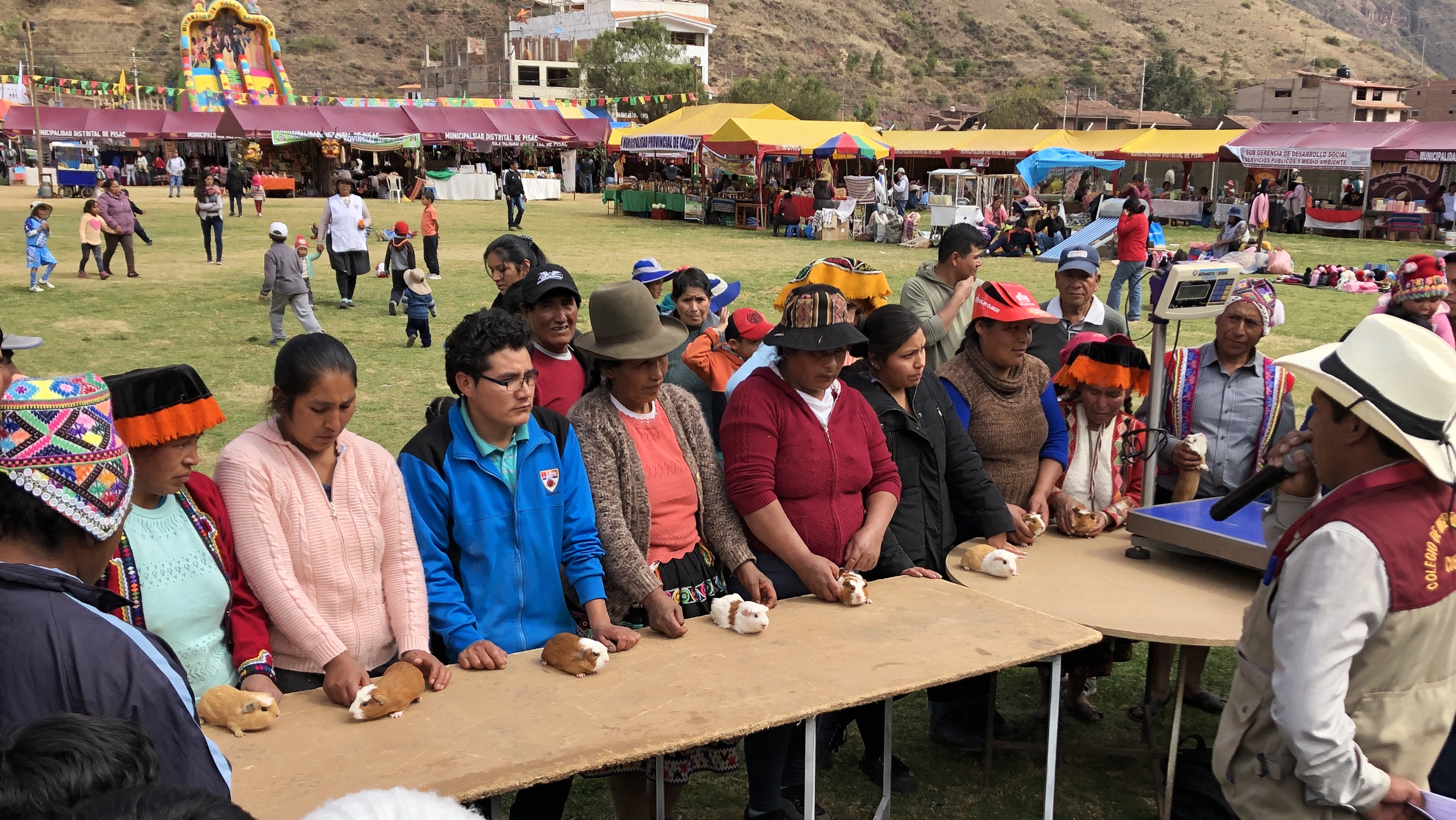 At this table the man in the maroon and tan vest with the light colored hat is judging the cuy competition.  I am sorry to bring this up again, but you may remember from prior posts, cuy is a common food in Peru and Ecuador.  In the USA and many other countries we refer to this rodent as a Guinea Pig or Cavy and we do not eat it.  But here it appears on many menu’s and is commonly eaten grilled on a stick. 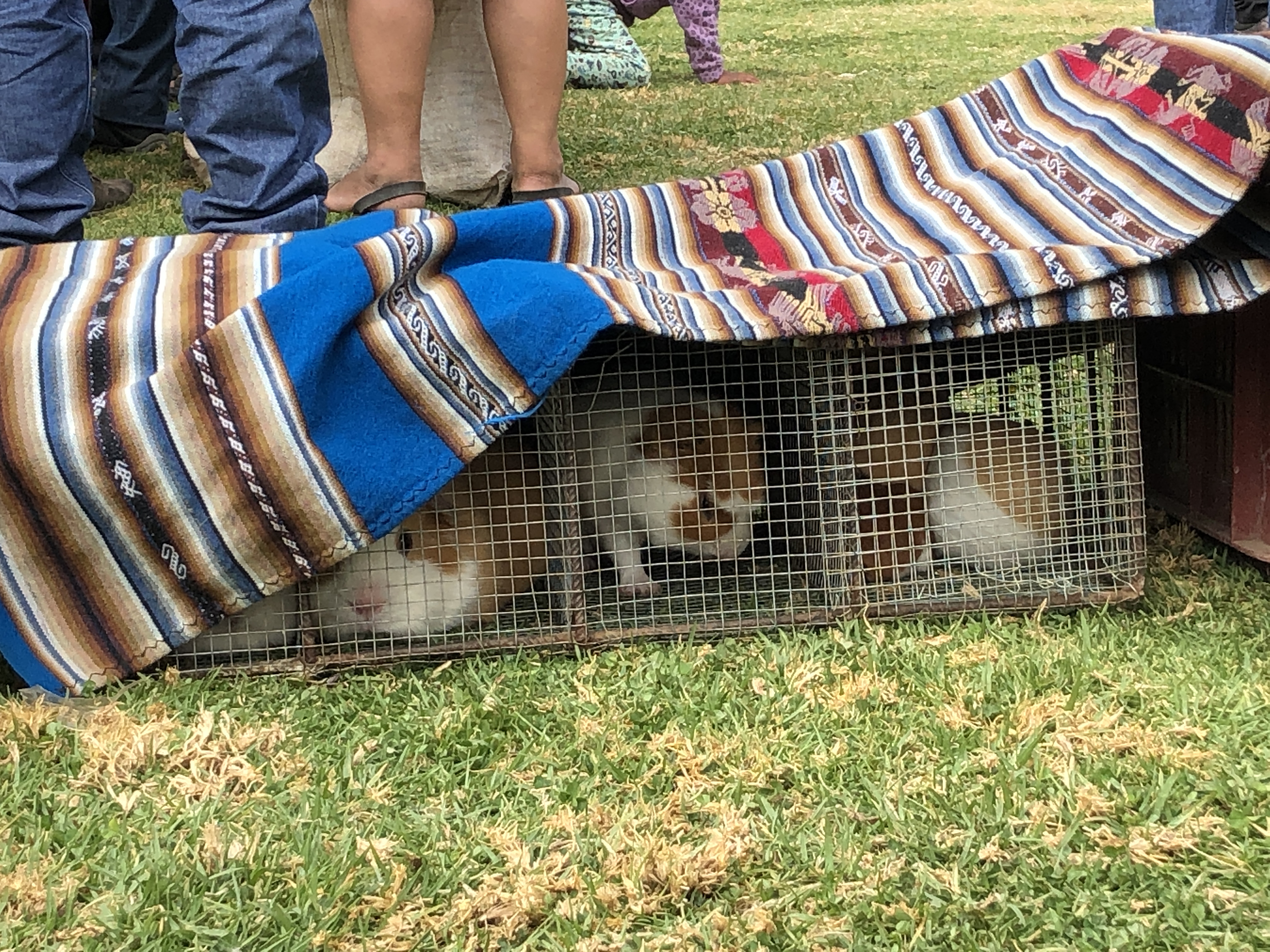 These large cuy are waiting in a cage  behind the crowd for their category to be judged.   They are covered with beautiful fabric to help keep them cool from the afternoon sun.

The finalist for this cuy judging category will realize that she is the winner in this series of photos.  You can just barely detect a smile on her face as she accepts the fancy green ribbon prize!

After all this fun we had worked up an appetite.  We wandered over to check out the food booths and see what was on the table for Peruvian fair food.  Just outside the cerveza (beer) booth we spotted these cow heads.  They are for sale if you would like to add one of these to your home decor.   Notice that the hoof beer bottles are also available. 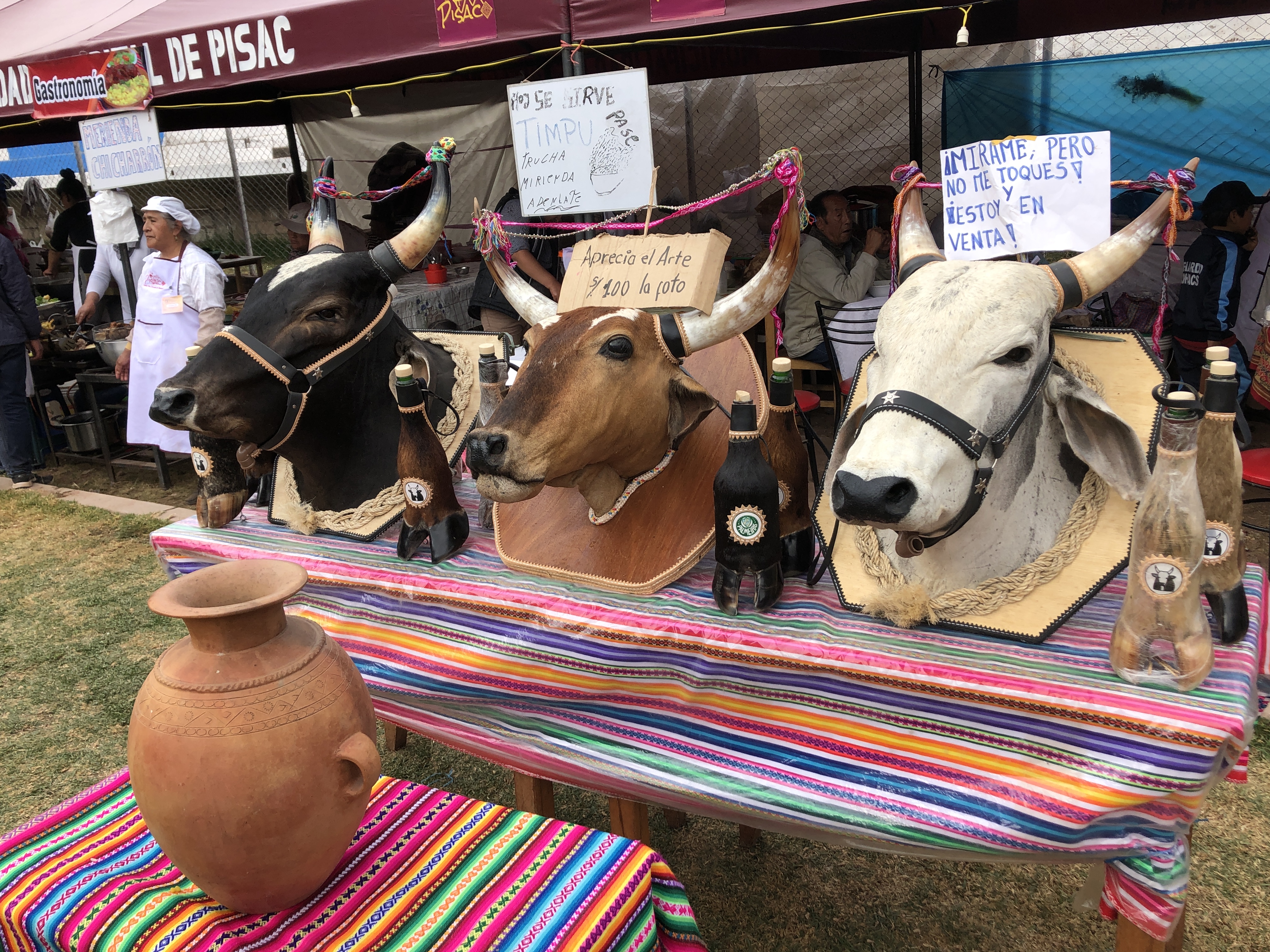 The fair food was just standard Peruvian menu items.  There were no deep-fried twinkies or corn dogs.  We found chicharron (fried pieces of pork and pork fat) and pollo frito (fried chicken) and cuy asado (grilled cuy) and also ceviche (fish pieces in vinegar and lime)  In keeping with our theory, we found the most crowded stand for the best food.  We ordered ceviche and chicha morada (a punch made from purple corn with cinnamon and cloves) 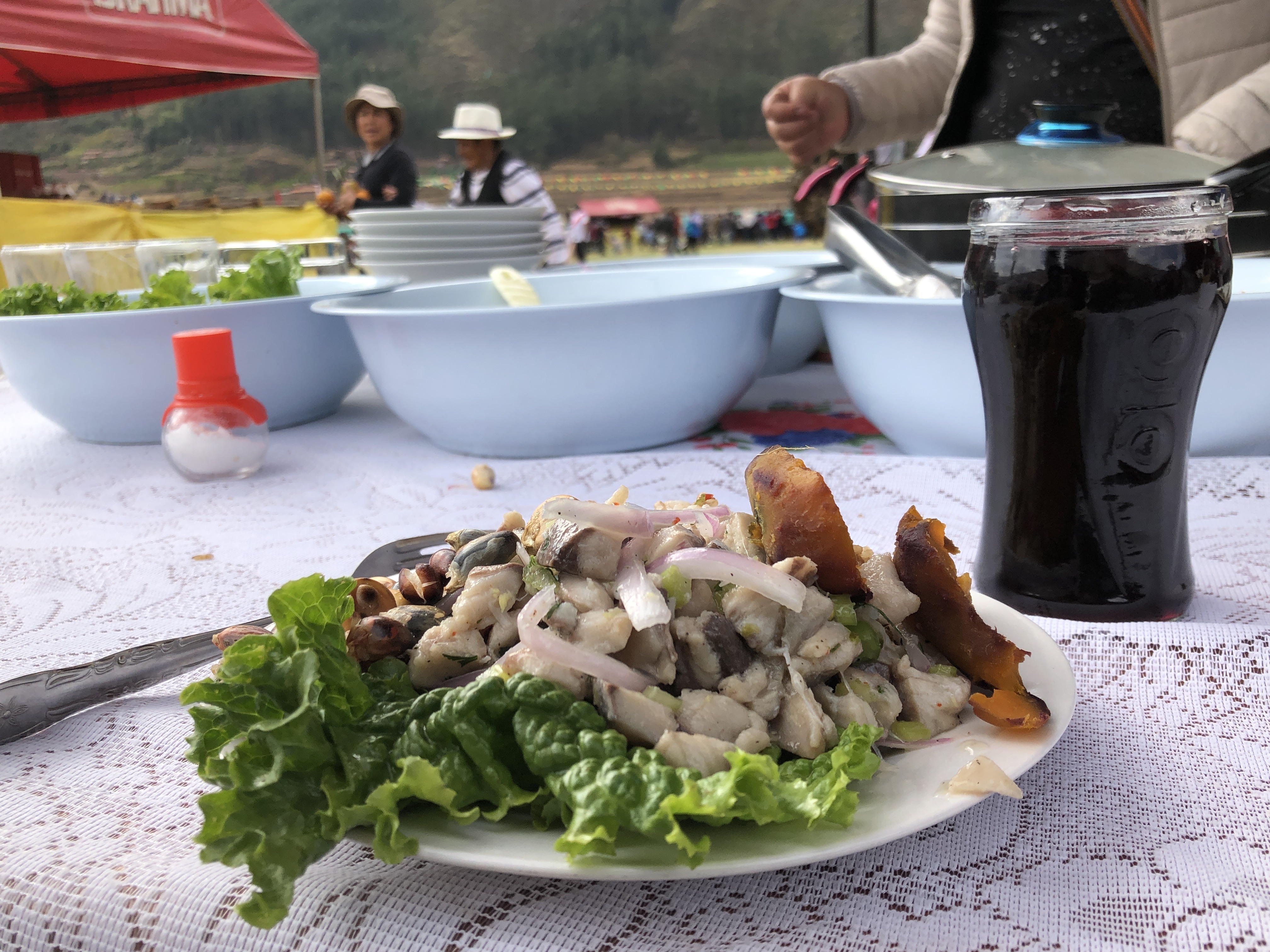 The ceviche was served with ensalada (lettuce, onion, celery and spices) and cancha (salty, toasted kernels of corn), arroz (rice with spices)  and two pieces of camote (one of 4,800 variety of potato) which have been boiled to a perfect consistency. 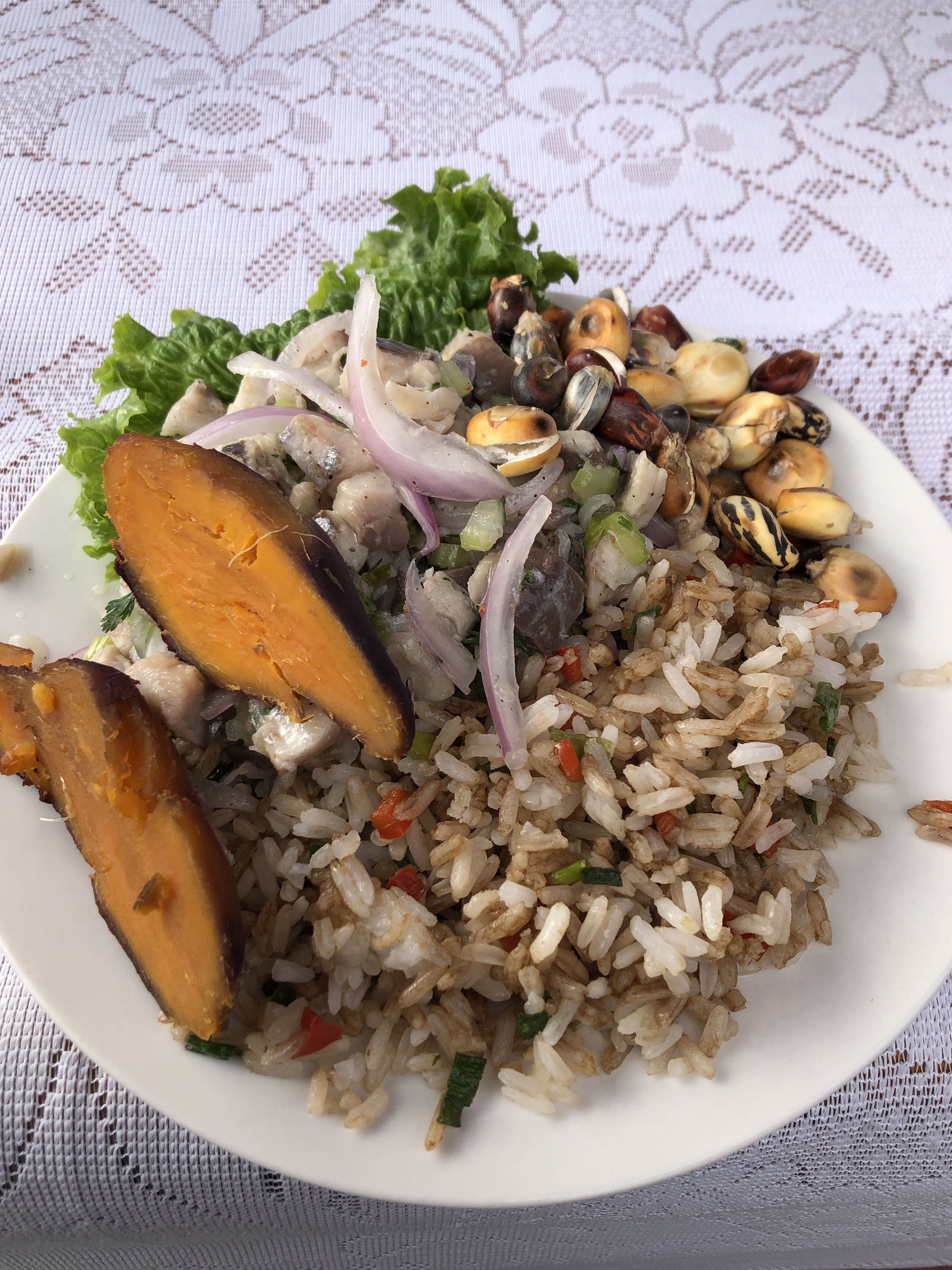 After this filling meal, we were ready to wrap up our visit to the regional fair.  We felt very lucky to have found this wonderful event and been welcomed by each area of the crowd as we wandered around watching their activities.  I hope you enjoyed the photos, movies and explanations of our day at the Peruvian Feria.

One response to “Peru- A regional fair (feria).”