Cuenca was our last big city stop in Ecuador before we crossed the border to Peru. The some small ruins that are attributed to the Inca mark the area around Cuenca. We took the time to explore several of them.

Banos del Inca in Ecuador is an area said to have been used for ritual and sacred bathing as well as ceremonies. There are many “tubs” and channels carved into the large stone here. There are also niches, which may have displayed important figures during the ceremonies. 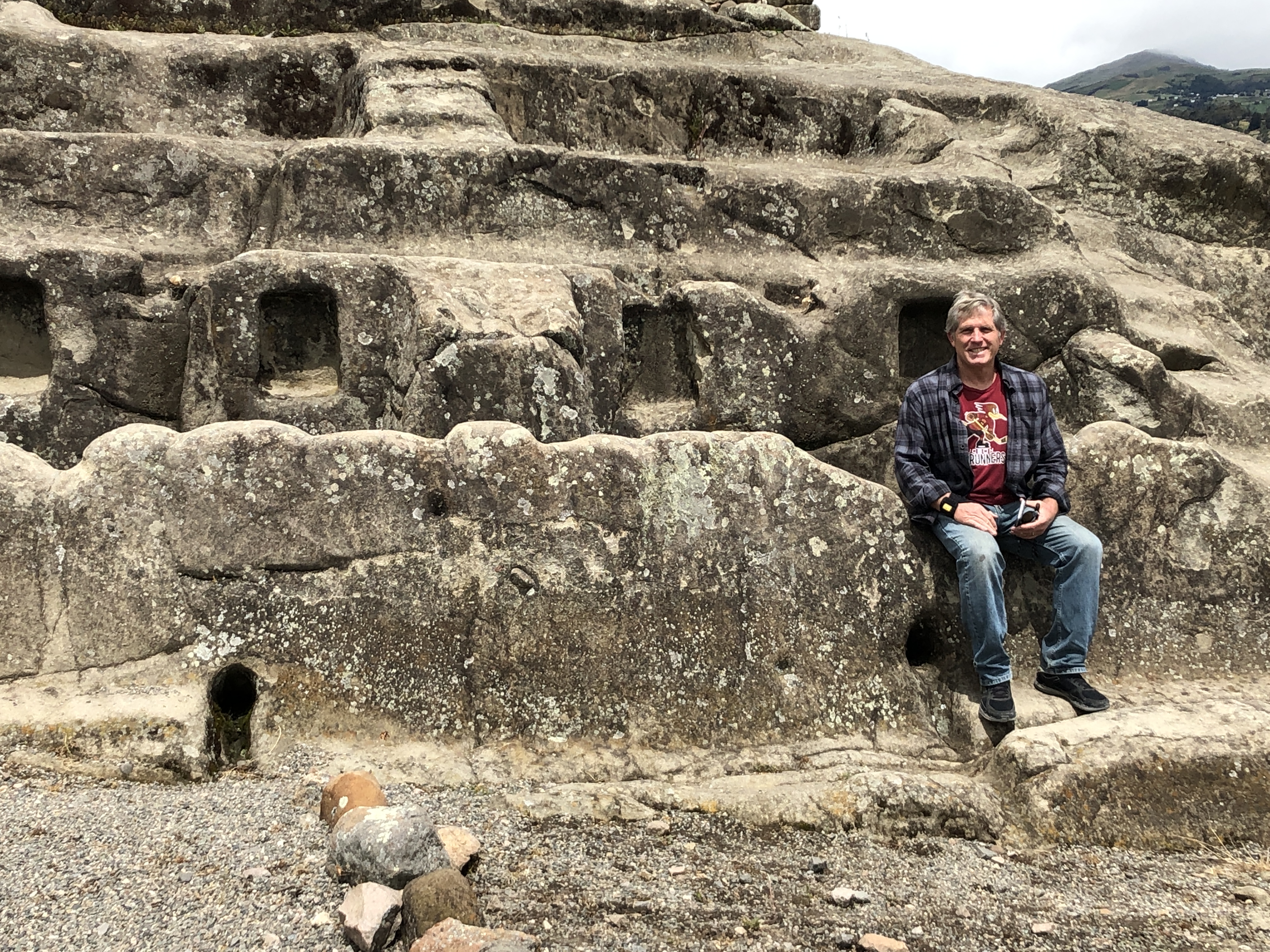 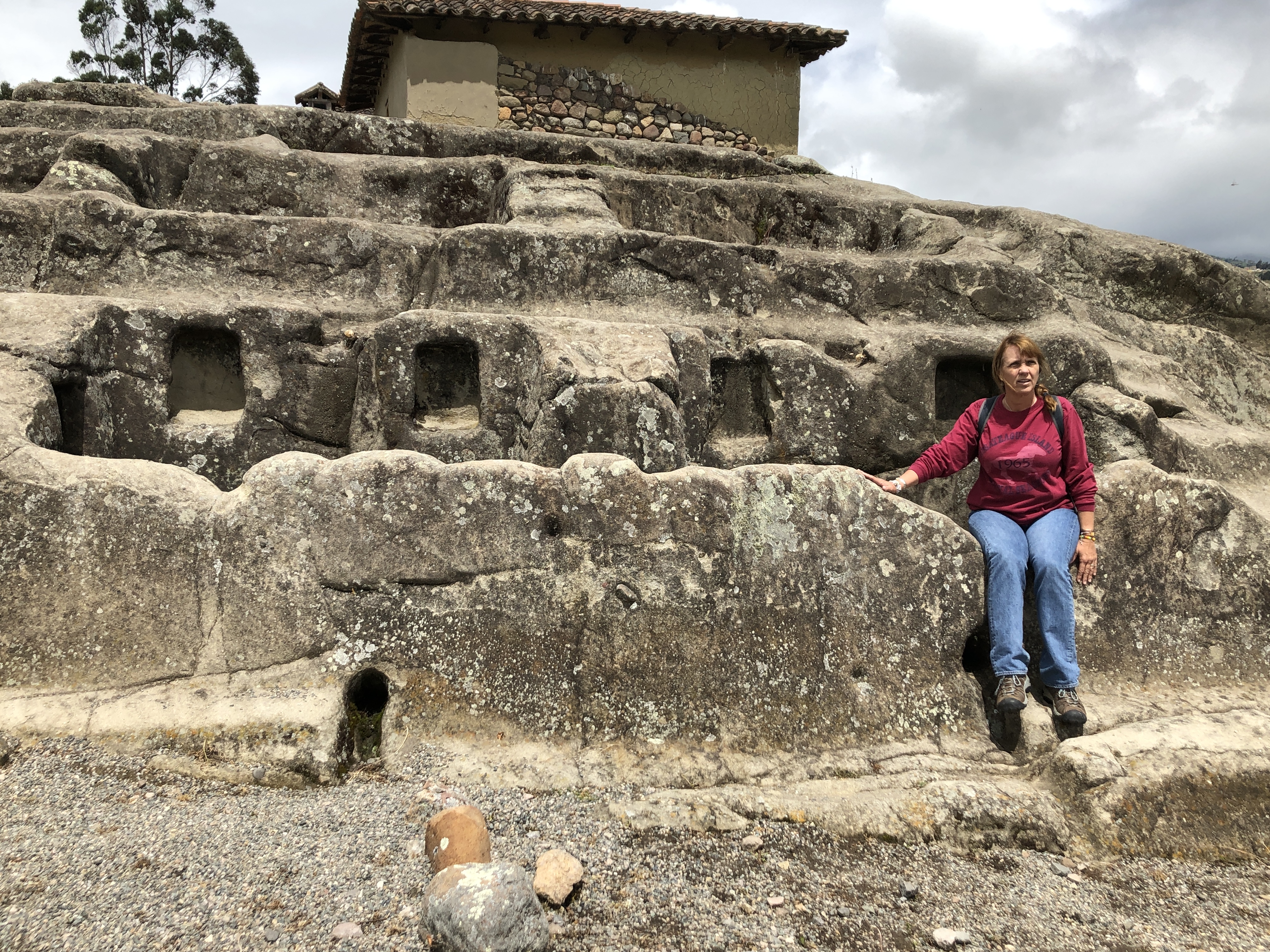 Another section of rock has been carved into what may have been a throne. There are steps leading up to it and it faces out over the large field below. 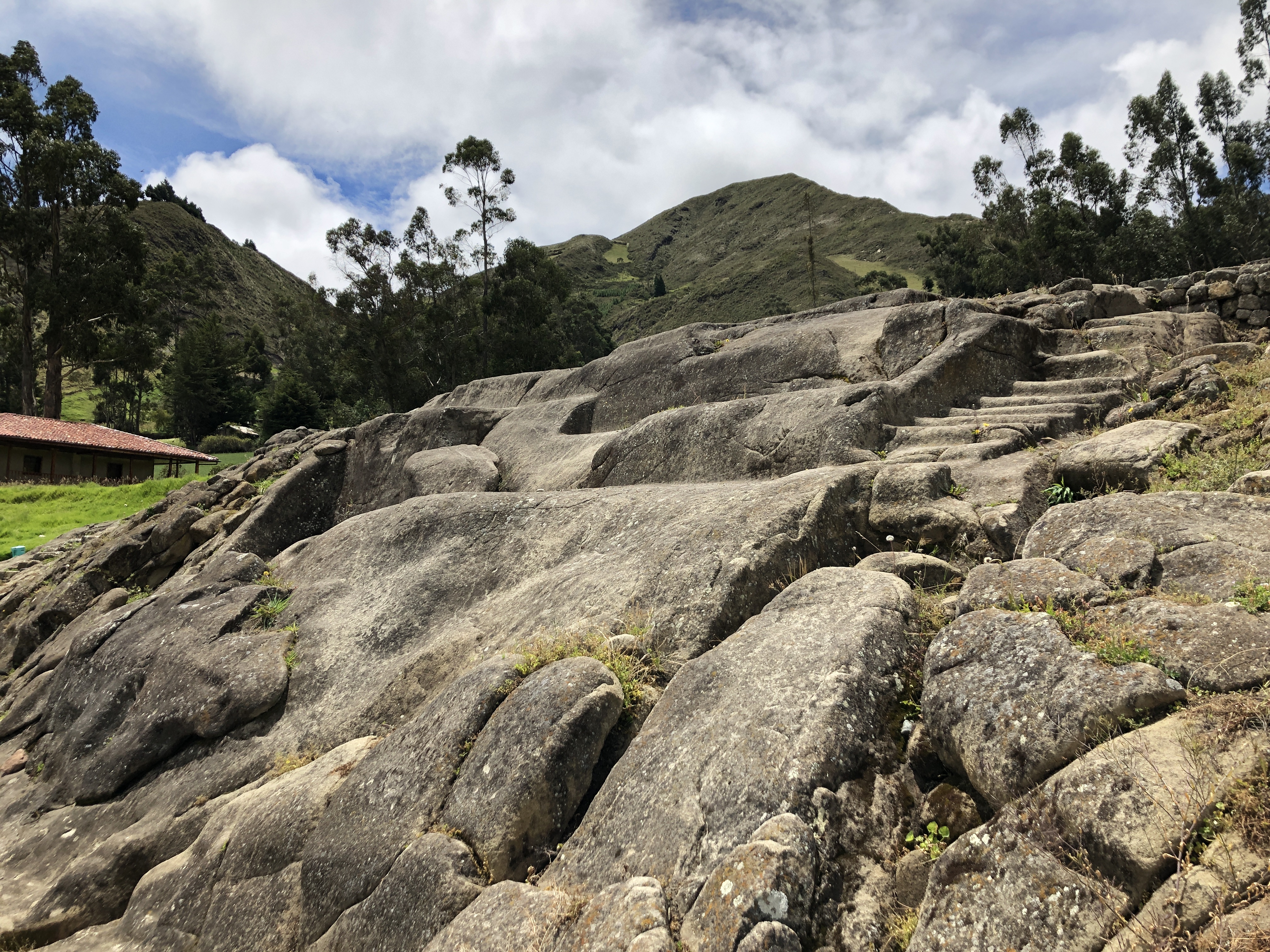 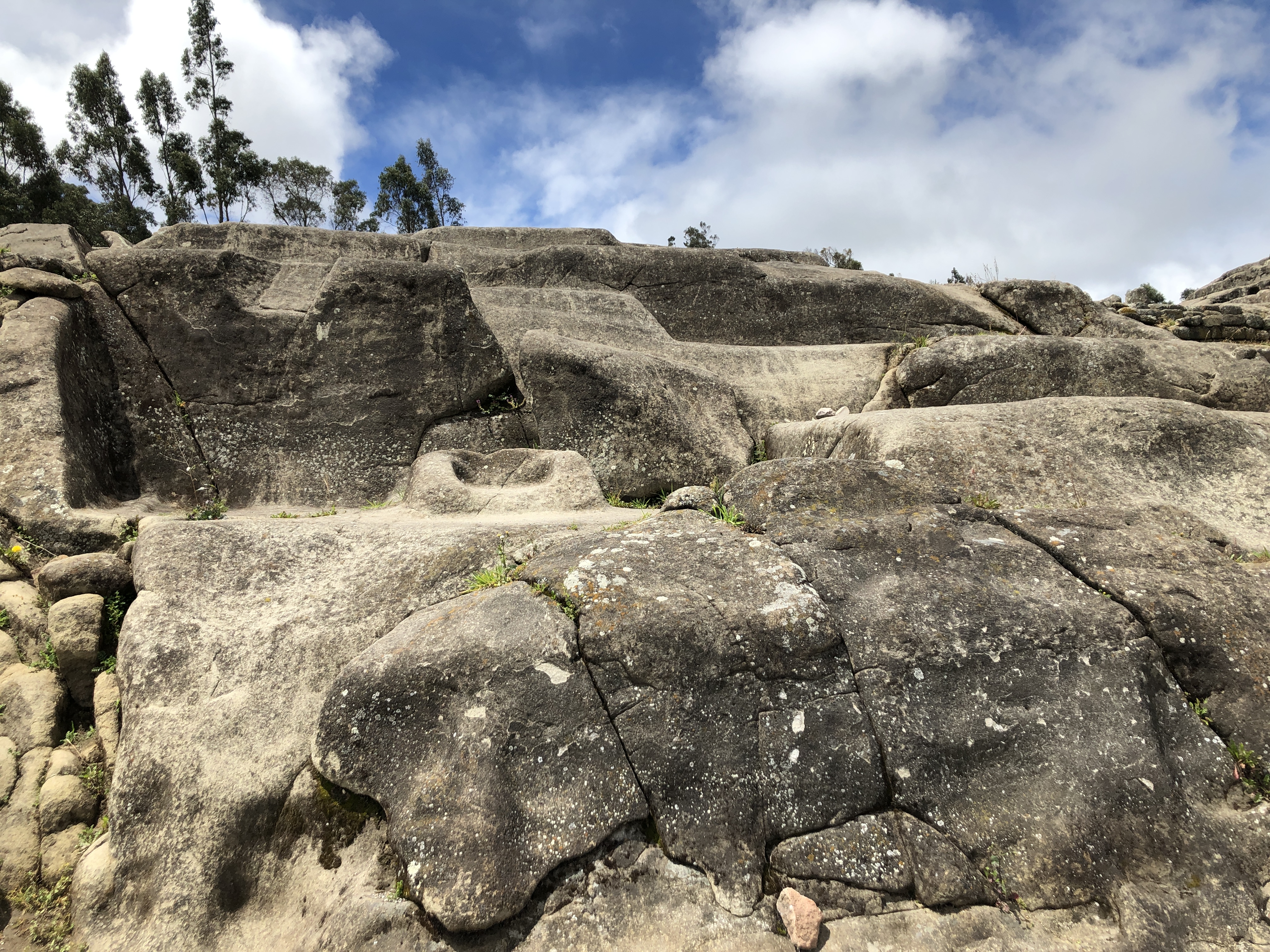 In the field below the Inca baths were a couple of grazing llama. Geneva decided to chat with them and ask for a few photos. But when they laid back their ears, she realized that meant, “Go away”.

There used to be a train to provide transport to the people living outside of Cuenca. Although the train seldom runs anymore, we did find the end of the line. An engine would pull a train of cars up the hill to the villages. At this location, the train would stop with the engine parked in the circle and disconnected from the train. The passengers of the train cars would then turn the circular section of track. This would rotate the train engine until it was facing the opposite direction. Then it would be reconnected and the engine would push the cars back to the city.

Many of the villages are still active in farming. We saw people working the fields with wooden implements pulled by oxen. We also saw a woman checking her cornfield with her dog and a scarecrow nearby. 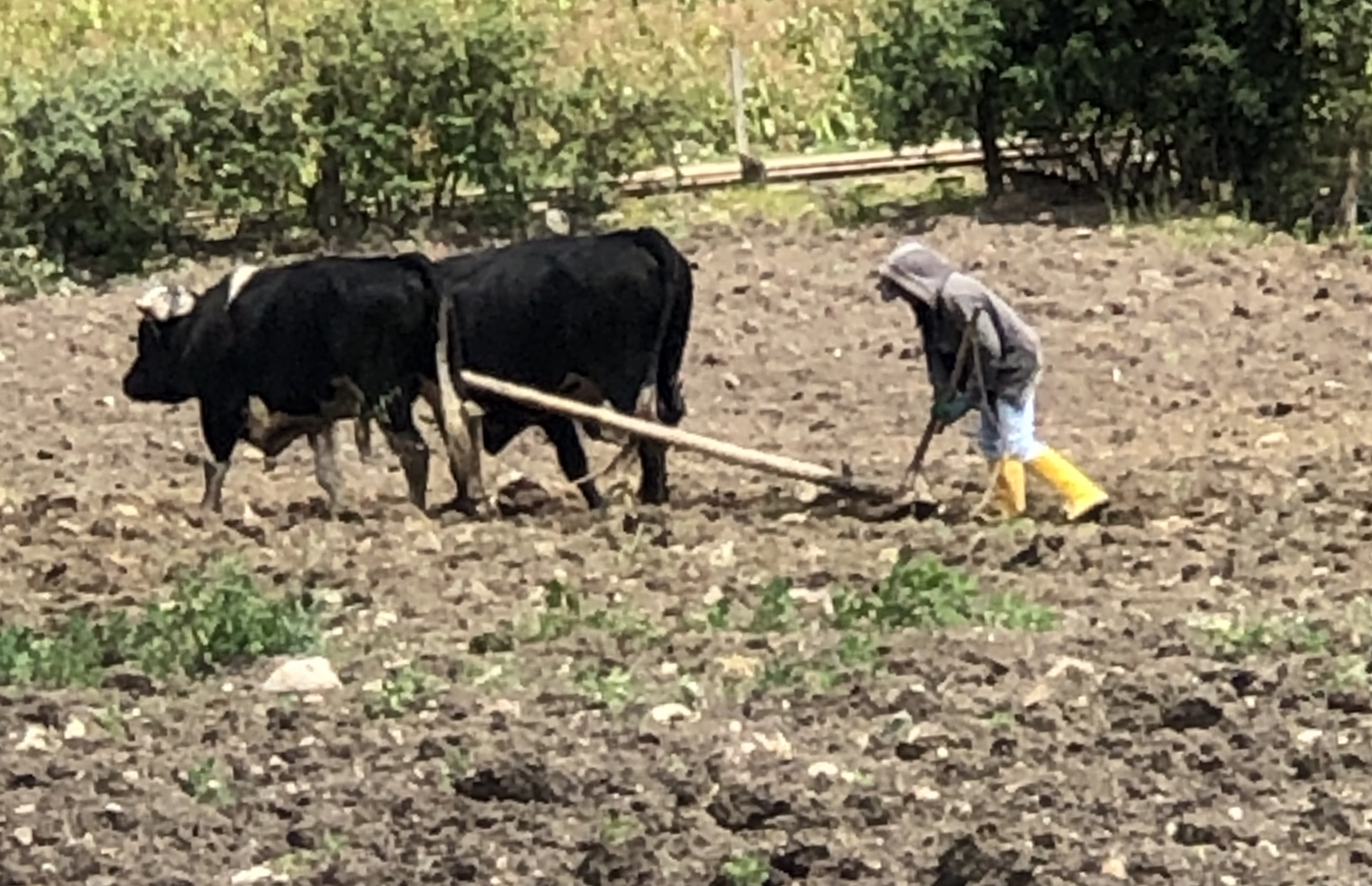 The primary crop in this region is corn. Some of it colorful and some is traditional yellow/white with large, chunky kernels.   When this corn is steamed and served with cheese it is called choclo. (We might call this “corn on the cob” in the United States of America). Choclo is traditionally served with just salt and a chunk of fresh farm cheese (Queso fresco). Fresh farm cheese tastes similar to feta and is soft and crumbly.

We had our choclo with hot coffee and also a sample of a local rum drink. The rum is served warm and contains some mild spices and a hearty squeeze of lime. Both the coffee and the rum were very strong and warmed us up well on a cold afternoon.

In one small village we stopped by to see the town mummy. This village is also known for their historical skill in making high quality rugs of llama wool. One such rug was presented to the President of United States of America. A thank you letter has been etched into the display in this town museum.

This small museum also features a daily guest speaker. This man is the last of the ice harvesters. These men were hired to climb up the glacier and cut blocks of ice. They would wrap it in straw and bring it down to the city on donkeys. The ice harvesters are proud to tell their stories from the past.  .

But the real masterpiece on display in this museum is a mummified priest. Although little is known about him, he is believed to be of Spanish descent. He likely died of smallpox and he had terrible arthritis. When he died a VERY LARGE urn was created and the area natives placed him inside. This practice is in keeping with their native burial traditions. But because they viewed him as a man of the church, they didn’t place him in a traditional underground tomb. Instead they entombed him, laid out in the urn, inside the walls of the Catholic Church. The natives did not keep written records and after a few lifetimes the man inside the wall of the church was forgotten. Then a major earthquake shook this region of Ecuador and the wall of the church crumbled!   His urn crashed to the ground and revealed his mummified body to a shocked congregation. Now he lays in a glass case, still as mysterious as ever. 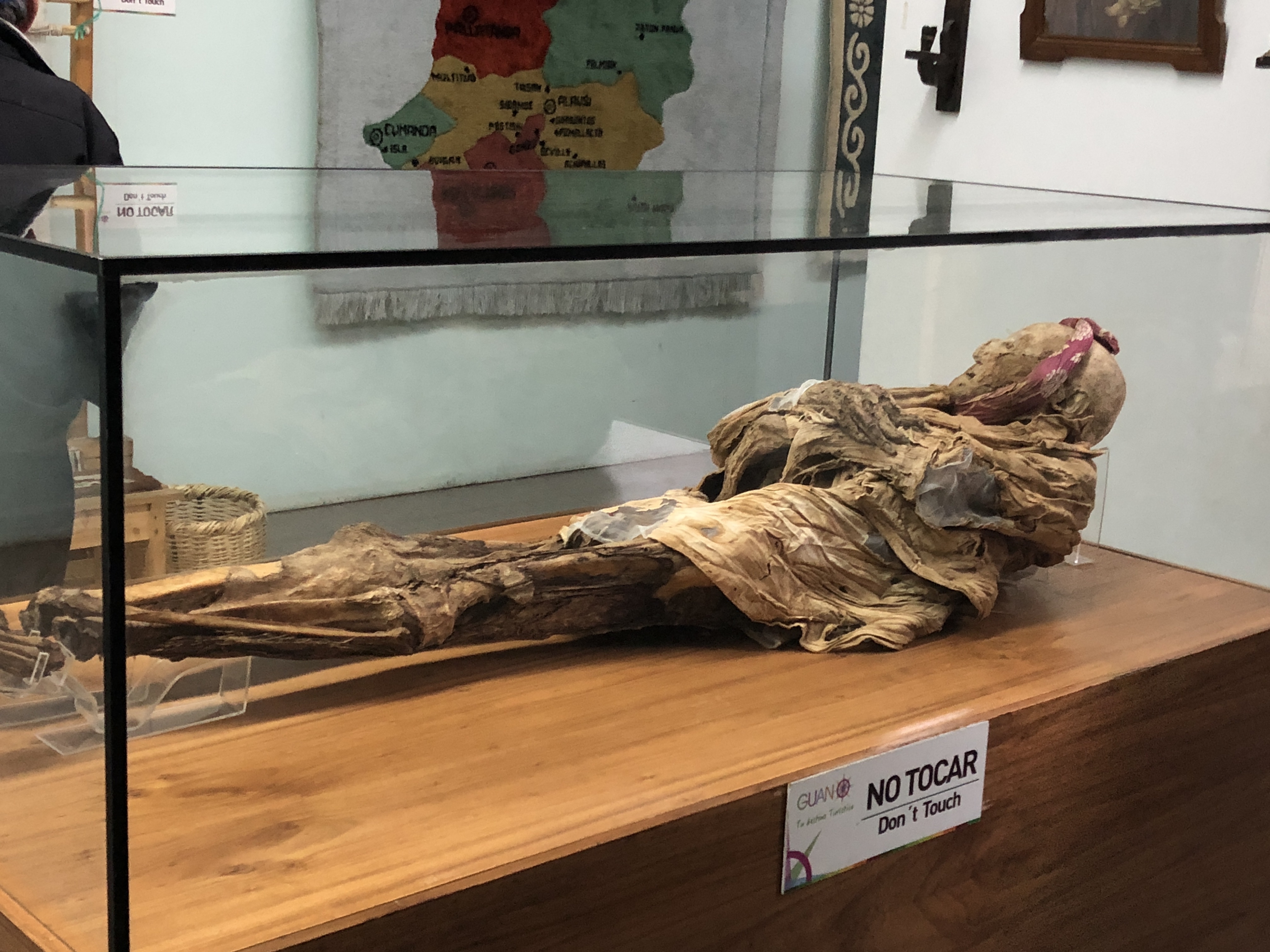 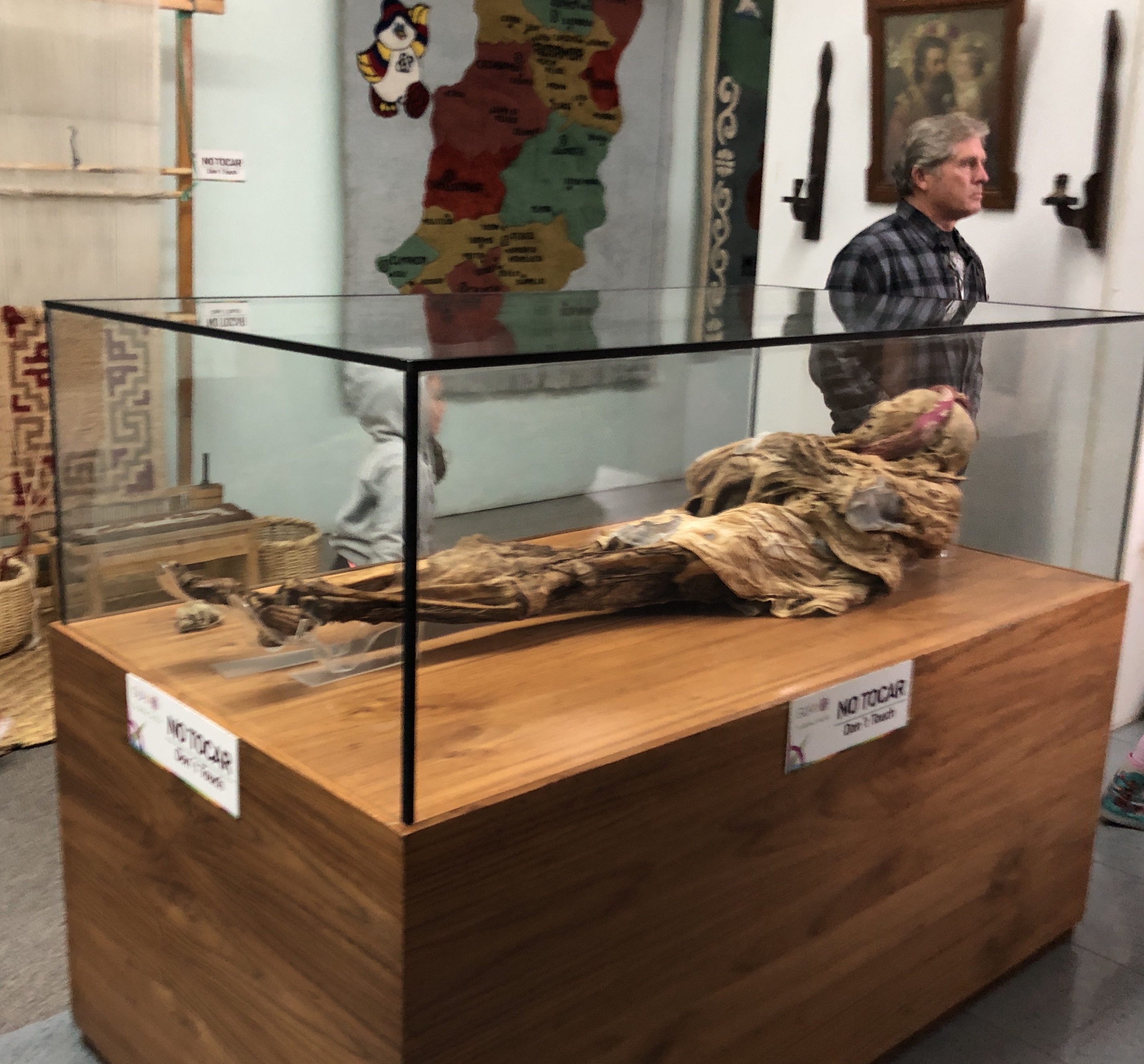 We also visited the ruins of Ingapirca. These are the largest and most restored ruins in Ecuador. The site is thought to have religious and astronomic significance. There were also many small housing areas and storage structures around the Ingapirca site.   The stones are huge, tightly stacked and carved with great precision.  But there was very little information at the location (signs, or maps), and we did not have a guide when we walked through. We left feeling a bit under informed and underwhelmed by this place. But it was a good taste of the ruins that remained ahead of us in Peru.

Cuenca is a large, Spanish Colonial city. The skyline is beautiful and there are many gorgeous churches to be viewed. Many of the buildings are decorated lavishly with balconies and columns. 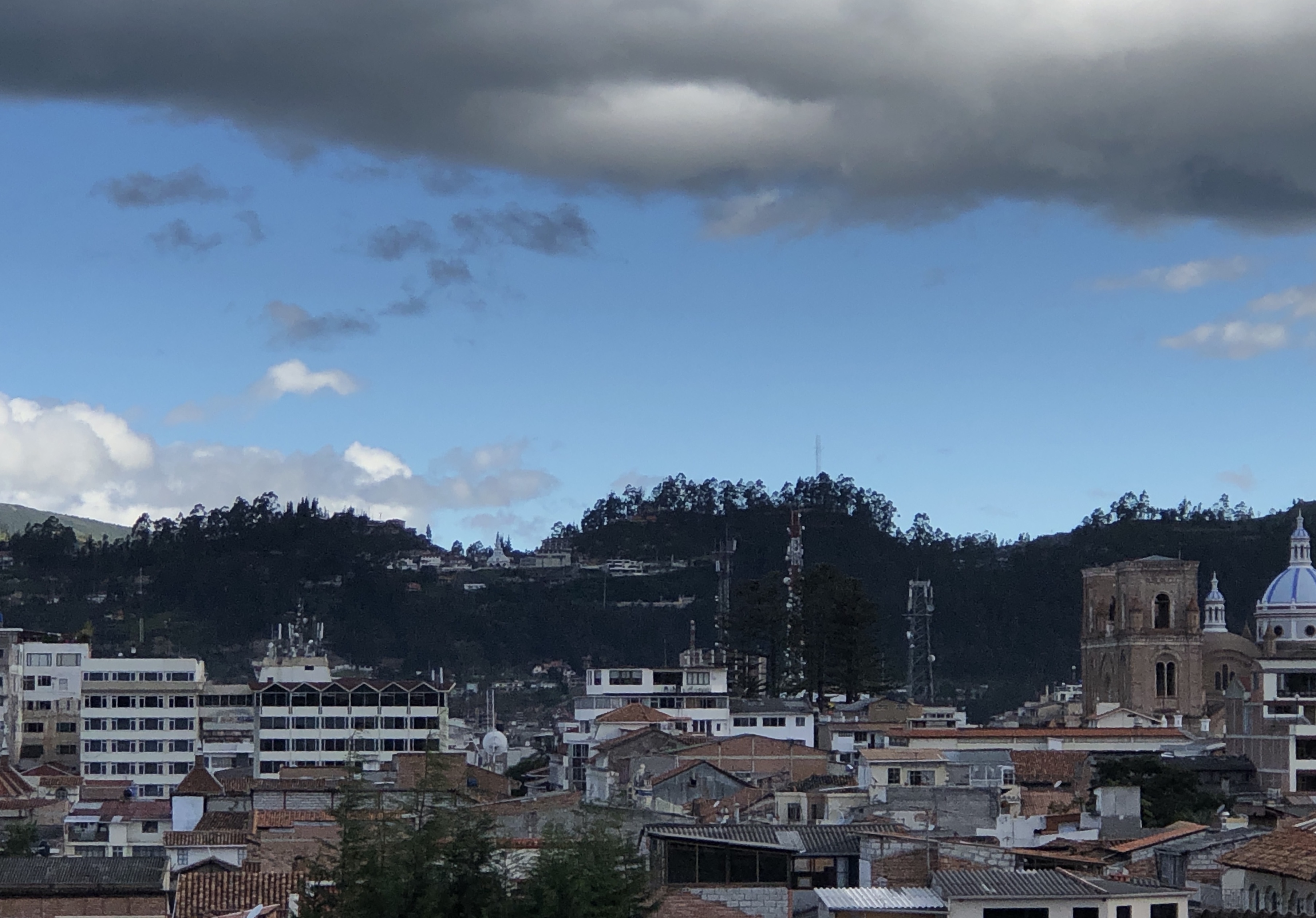 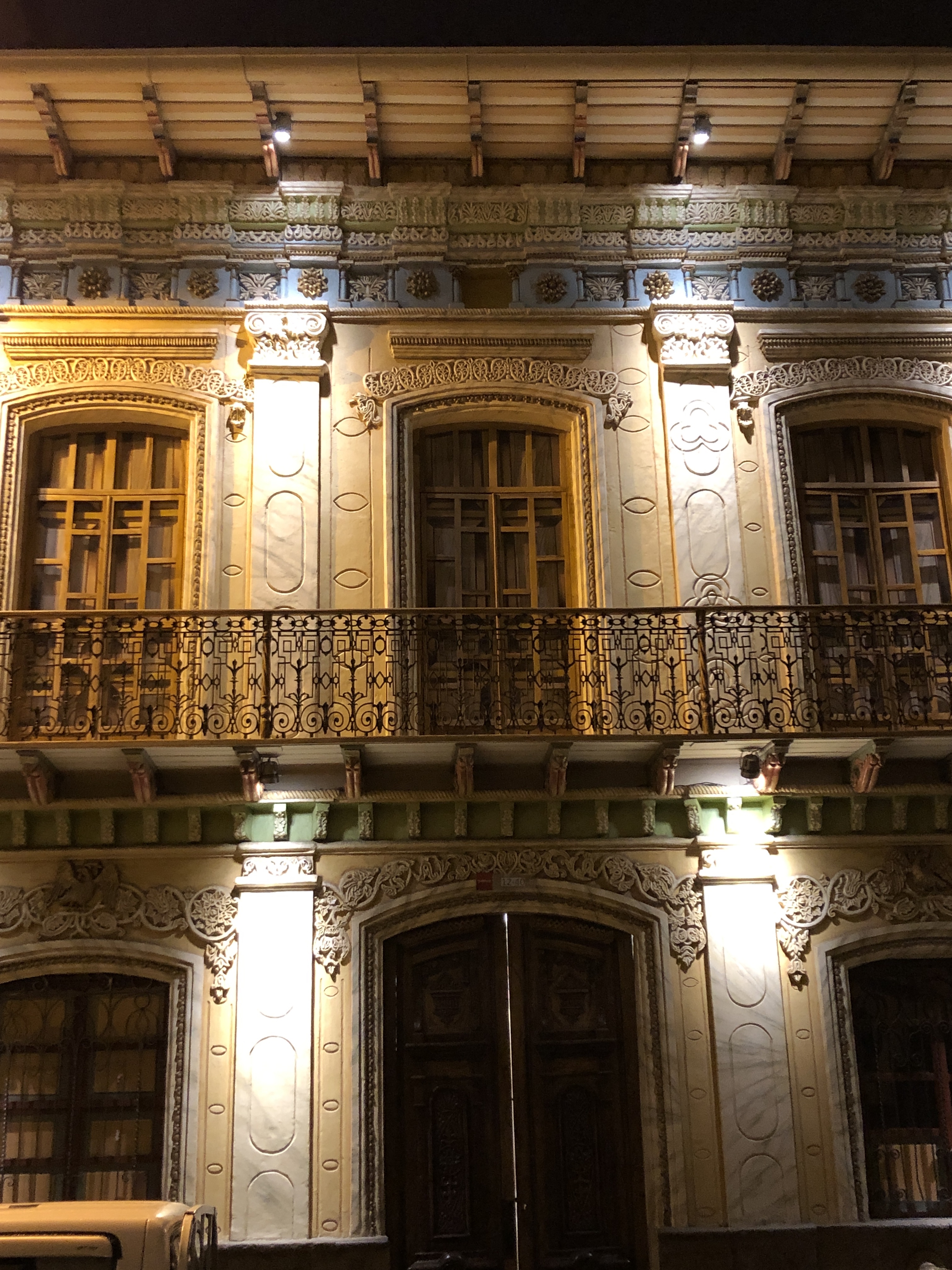 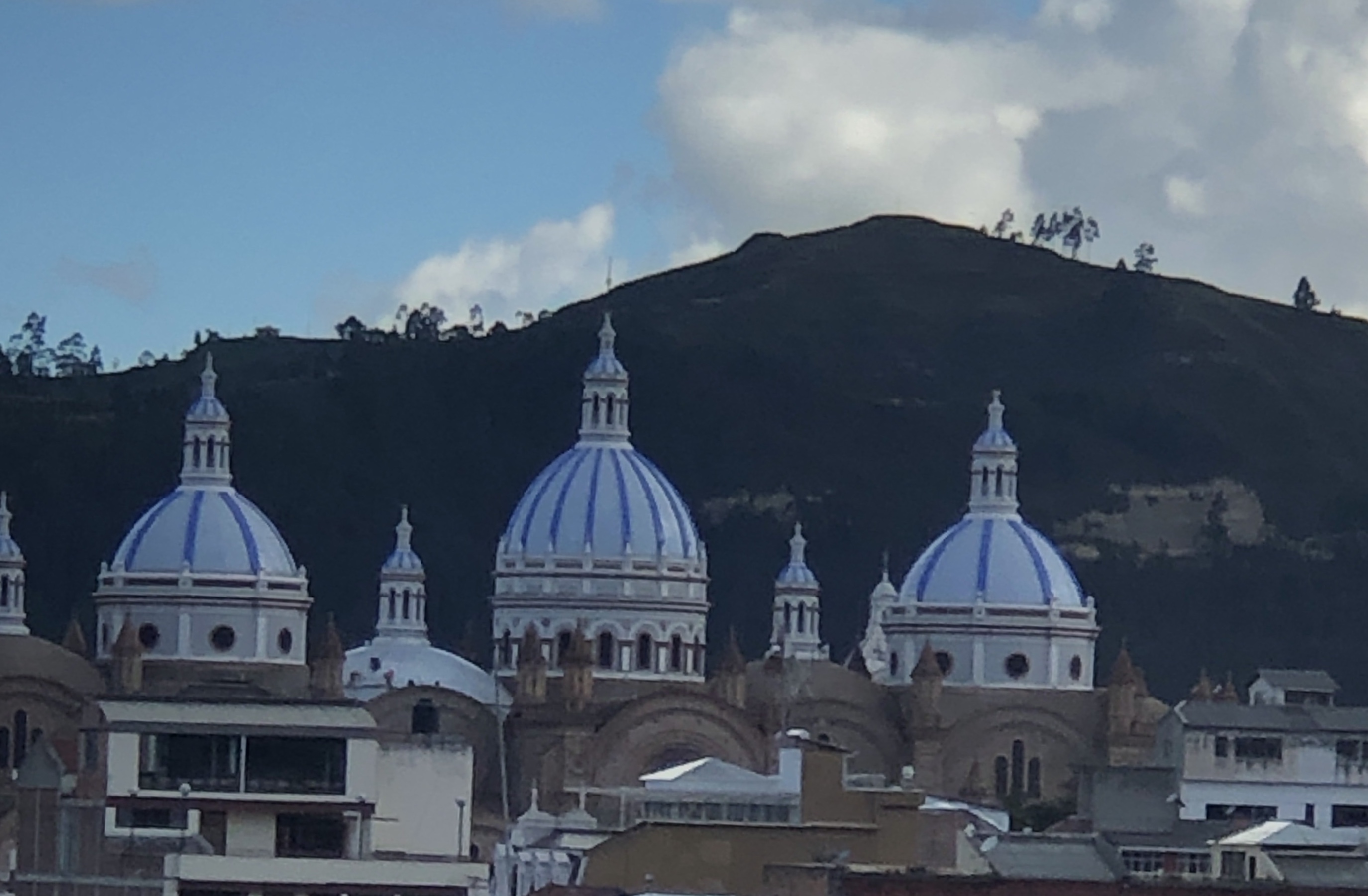 Walking the streets of Cuenca you are as likely to see a trendy restaurant, a boutique hotel, fashionable teens and a traditionally dressed indigenous woman. It is a very blended city, with much history and future to offer.

While we were in Cuenca Mike had some medical attention. He has had some wrist pain recently and finally agreed to have it checked. He was able to see a doctor, have an x-ray, obtain and ultrasound and get a reading and review all within four hours. The entire procedure cost about $35.00 and the diagnosis is early tendonitis, known as De Quervain’s syndrome. He is wearing a wrist/thumb brace for a month or so, in hopes that it will heal up. 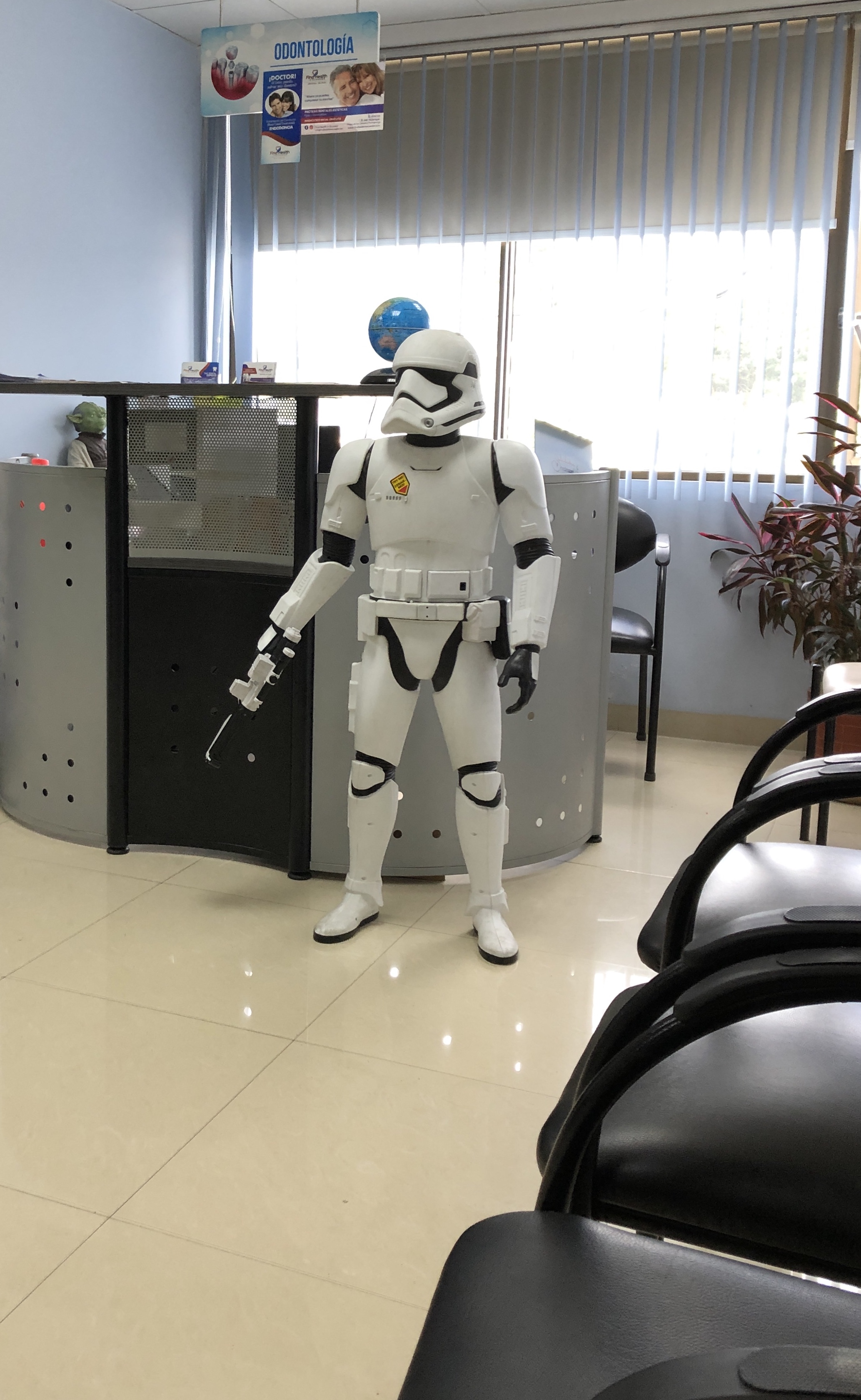 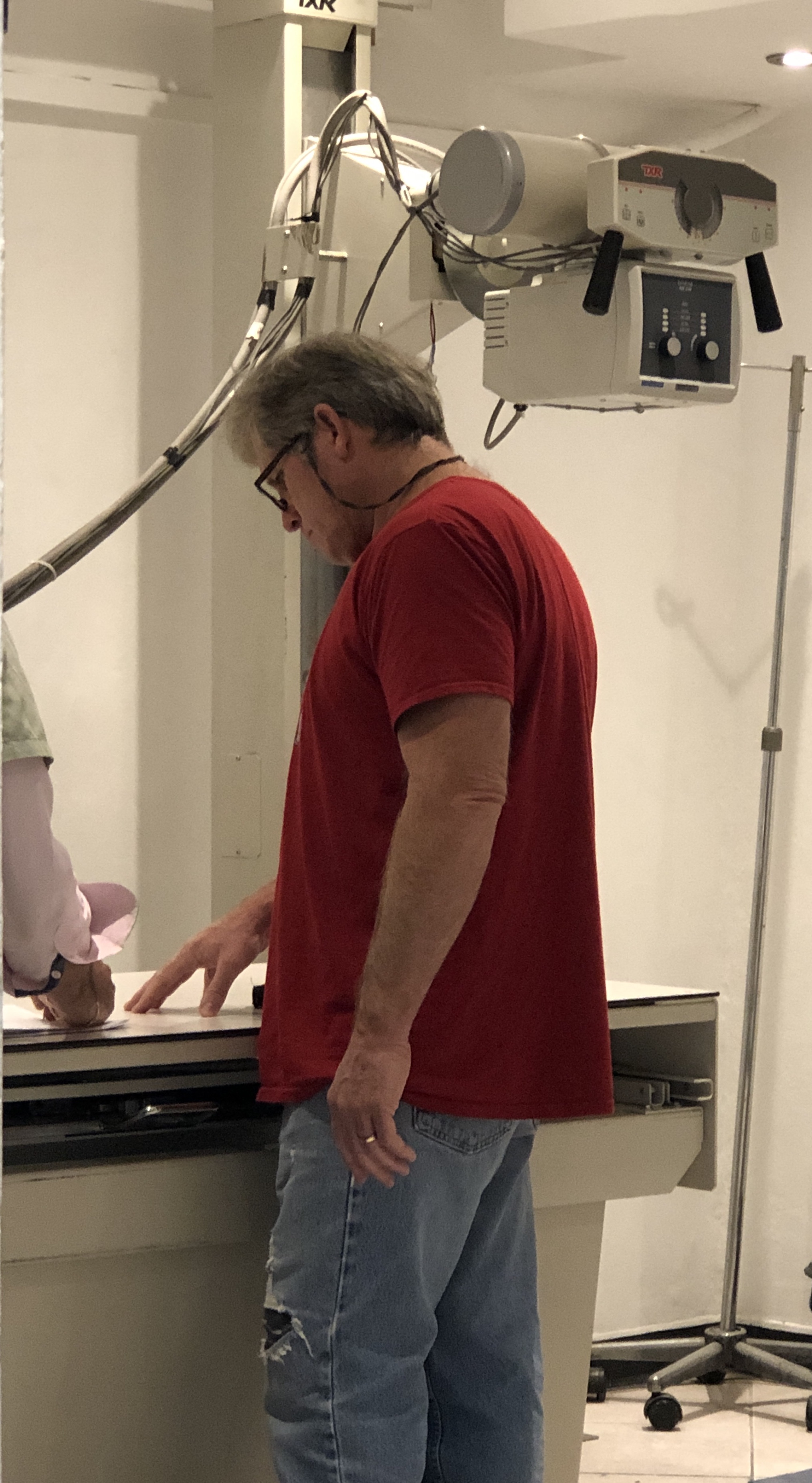 This was our last major stop in Ecuador. And in reflection, we really learned an important lesson in this country. It is best represented by the lesson of the rainbow, as follows………

Frequently while driving through small indigenous towns and villages in Ecuador we would see rainbow flags flying. These bright flags were displayed on homes, on sheep fences, and flying over barns and fields. Sometimes we even spotted small versions of the rainbow flags hanging in car windows or displayed in business windows. We discussed it briefly and jumped to the conclusion that Ecuador must be a very forward thinking and accepting country, particularly these small native villages and the inhabitants. There certainly are not many places in the USA that fly as many rainbow pride flags as we have seen here in Ecuador.

Then we met and befriended the tour guide in Quilotoa. This is the man that taught us about the legend of the condor and also explained what a minga is to the indigenous people. We asked him about the rainbow flags and he shared the facts. The rainbow colors represent significance to the natives. Red= blood of past battles, Orange= the sun, Yellow= corn, Green= the crops, Blue= the sky, Purple= the underworld.  The flag is displayed to declare pride in their indigenous heritage. He seemed puzzled when I mentioned a different meaning in the USA. Then he chuckled and walked away. When he returned he handed me the silky rainbow flag with ragged edges that had been hanging on the fence nearby.   Clearly we are the ones who had jumped to the wrong conclusions. We made a decision based on our limited experience and our own culture.   We did not even leave space for an alternative explanation. To us a rainbow flag had just one meaning. And to the native people of Ecuador, it has a very different significance. 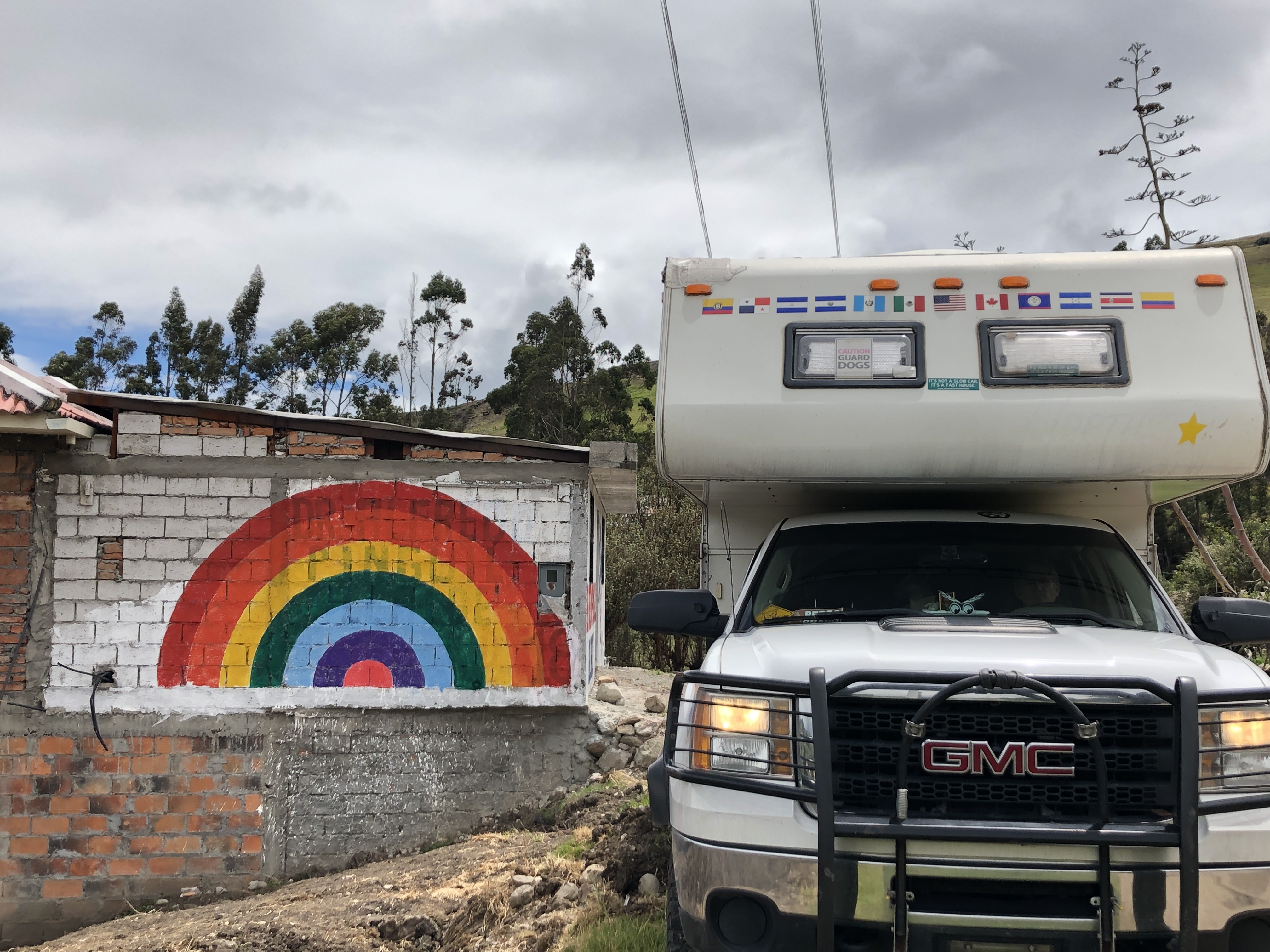 When we discussed this later we realized that we had done the same with regards to the country of Ecuador. We had a preconceived idea that the only thing this little country had to offer was the equator. After three months of exploring, we realized that Ecuador has all the colors of the rainbow and a deep and meaningful past. Thanks Ecuador, for reminding us of the value of stepping beyond what we have learned into new knowledge.

Our Ecuador explorations are completed.  See the dark line through the map of Ecuador.

Now let’s get ready to cross the border to Peru.

One thought on “Ecuador- Cuenca and nearby historical areas.”