While we were staying in Guanajuato with The Slow Dutchman, everyone began noticing that Seri was more lethargic than normal.  We attributed it to challenges with the city walking schedule- some dogs just don’t want to go walk on crowded streets. 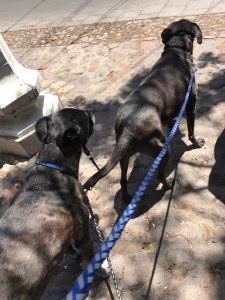 Then she started to leak urine while laying on her dog bed.  At this point we decided that her unwillingness to go outside was due to the “explosions” that seemed to be timed to occur during her walks.  In a previous post I described the celebrations held by the churches in each neighborhood.  Well those celebrations are punctuated by morning and evening fireworks.  Seri has never liked fireworks (no hunting Catahoula, here).  So we determined that perhaps she had a bladder infection from holding it, and we booked a vet visit.

In the city, without a car to get around one must think through this process. For us, this meant that a vet visit required a special taxi willing to accept a dog.  So we booked a ride with the Pet Taxi.

This is the cage in the back for the pets to ride in.  The owner sits up front with the driver.  It worked, we got to the vet.  Here are photos of the outside of the vets office- waiting area. 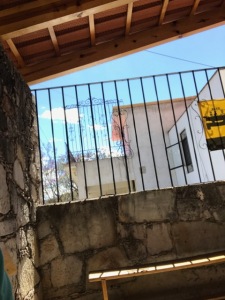 There was a large bird in a cage in this outdoor area.  Seri is watching it closely, you can see her ear here.  Once we went in, we were rather surprised to see that the surgery areas, exam areas and business office were all open and interconnected.  We saw cats in cages in recovery, a puppy on the floor waking up from surgery and a few dogs on tables, midway through surgical procedures.  Check the photos for more details.

The assistants are performing a spay on a puppy in there.

That pup is out. Resting on a cool tile floor as he/she wakes up from anesthesia

The crates contain cats that are just waking up.  The dog on the table in the room to the left is having a teeth cleaning, under anesthesia.

(I am simply sharing this info, no judgement.  These are the procedures that they have in place, and it obviously works for them as they are very busy.)  The doctor is cleaning a dogs teeth, and balancing an unlit cigarette in his mouth.  When we come in he directed us to wait in the open area.  So Seri laid down and I sat with her on the floor. 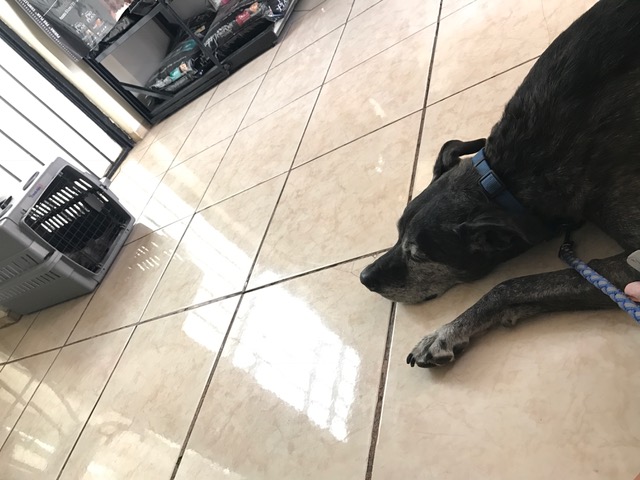 When the vet was done with the teeth cleaning, he walked over and looked at Seri. He never sat down, just looked from standing up. She had leaked some urine while waiting, so he had the assistant get a sample.  He looked at it under the microscope and said it was clear of bacteria.  We talked about her thyroid meds.  I admitted that I was only giving it once daily, as I was almost out and could not find a place to fill it.  He scolded me for this, and called another vet who had a dosage that would work for her.  Then he wrote and filled a prescription for an antibiotic for a urinary tract infection.

He told me that I must take her out to pee more frequently, even if she doesn’t want to go due to the fireworks.  He never touched Seri at all. Never checked her pulse, temp, heart or even felt her fur.  We paid for the services and loaded back into the waiting pet taxi.  After a stop at the other vet to pick up some thyroid meds, we went home and she was exhausted.  So was I.

I felt conflicted about the vet visit.  We had some medicine, and a possible reason for the leaking urine.  But she was still lethargic and not her normal bossy self.  As I reflected on everything I saw at that office, I realize that it was clean, busy, and in many ways, much like the vets offices I was accustomed to.  We just usually don’t see all the steps in the process when we go in with our dogs.  Usually all those things happen behind closed doors and out of our sight.  There was also the fact that the vet never really examined Seri.  But we followed the process, forced her to walk more and found a space in the garden for her to go pee more often.

She finished the 5 days of antibiotics and we saw very little change in her behavior.  She was more willing to walk, but the community fireworks had stopped.  She was still very lethargic.  She was so bad that I was prepared to say goodbye. She has been very uncomfortable, unhappy and melancholy. I couldn’t watch it any more. She would barely move all day.  She wasn’t eating much food.   So we called the pet taxi and headed to a different vet, recommended by the owners of the home we had rented.

This visit was very different.  There were no other pets in the exam area.  He immediately dropped to the floor and checked in with Seri, face to face.  He proceeded to do a very complete exam. He touched and listened and asked a lot of questions (in Español) and we muddled our way through the answers.

He was extremely thorough, asking about every possible step of her behaviors and habits and the timing of the changes we had noticed.  Then he stood her in the exam room and did a standing ultrasound. He had me hold her and watch the screen with him.  She really was cooperative as he gooped her up pretty good with the cream.

When the aorta and heart appeared on the screen he drew in a deep breath and I looked up at the screen. Her aorta was a large circle and her heart was HUGE. He looked around a little more and then we muddled through a diagnosis with our language barrier.

This is pretty standard equipment for an ultrasound

Her disease was diagnosed as Cardiomyopathy Dilated. It is terminal and chronic. He prescribed medication and we started it right away. He explained that she would either respond within three days or not at all. That will tell us the next options. This website has good info if you want to read more – it will open in a new window if you click on it.

This diagnosis explains the change in her behavior both slowly at first and then more rapidly. (More on that website) It also explains the coughing (her heart is so big that it is touching her trachea) and that is why she now eats laying down and stretches across her bed when she sleeps. All trying to relieve the chest pressure and trachea pressure. And the heavy breathing is from the fluid in her lungs and heart which causes a lack of oxygen.  The lack of oxygen and struggling heart cause the lethargy.  The urine leakage is due to the fluid build-up, her body is just unable to process it all normally.  She has been simply shutting down over the past few weeks as her heart fails.  He wanted to see her in a few days and see how she responds to the medicine.

We called up the pet taxi and went back to see this vet in a few days.

More alert and cheerful in the Pet Taxi

Seri and Mango waiting to see the vet.

Seri had shown quite a bit of improvement.  She was more active overall.  In just a few short days it seemed that the medicine was working.  We know that we are simply buying time. But for the 5 of us – where we are now physically and emotionally, this is the best decision.  So for now, we will continue with the medicine and hope for some more time with our precious Seri. 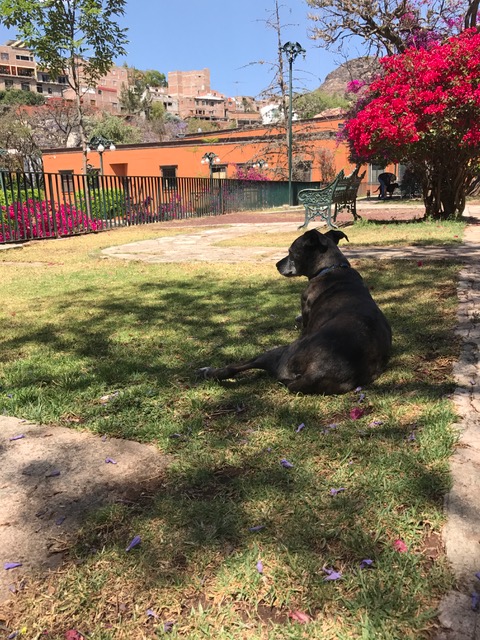 Seri- hanging out in a city park in Guanajuato.

Before I could get this post published and update you about where we are, things have changed.  In an effort to be honest and factual, I will share the update now.

Fast forward to today, May 20, 2017.  We are no longer in Guanajuato.  Seri spent the last 24 hours in respiratory distress with a racing heart and severe lack of energy.  She refused to get off the couch, she ate and drank very little.  She struggled to breathe and with each exhale she moaned slightly.  This morning she climbed up into the bed with us (she never does this) and laid down.  We gave her a double dose of heart medicine, but it changed nothing.  She stayed there on our bed for at least 3 hours, unable to move.  When she did move she was disoriented and fell down.  We contacted a veterinarian in a town near us and made arrangements.  We parked near the office and asked the vet to come out to the camper to see her and assist us in saying goodbye. 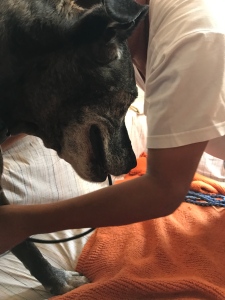 It was challenging for many reasons.  Mostly because of the language barrier….. he and his daughter/assistant resisted my request and attempted to talk me into additional exams, services, tests.  I cried and fought back as best I could.  I understood that they had a duty to carry out to preserve a life – but they had not seen Seri’s records, did not know her history, and did not know that Seri had communicated her wishes so clearly in the last 24 hours. We muddled through as my emotions increased.  We enlisted the help of bilingual friends on the phone and used Google translate to communicate.  It was not a good situation.

I think he finally understood that a pets owner generally knows what is best, and knows when it is time.  It was time. 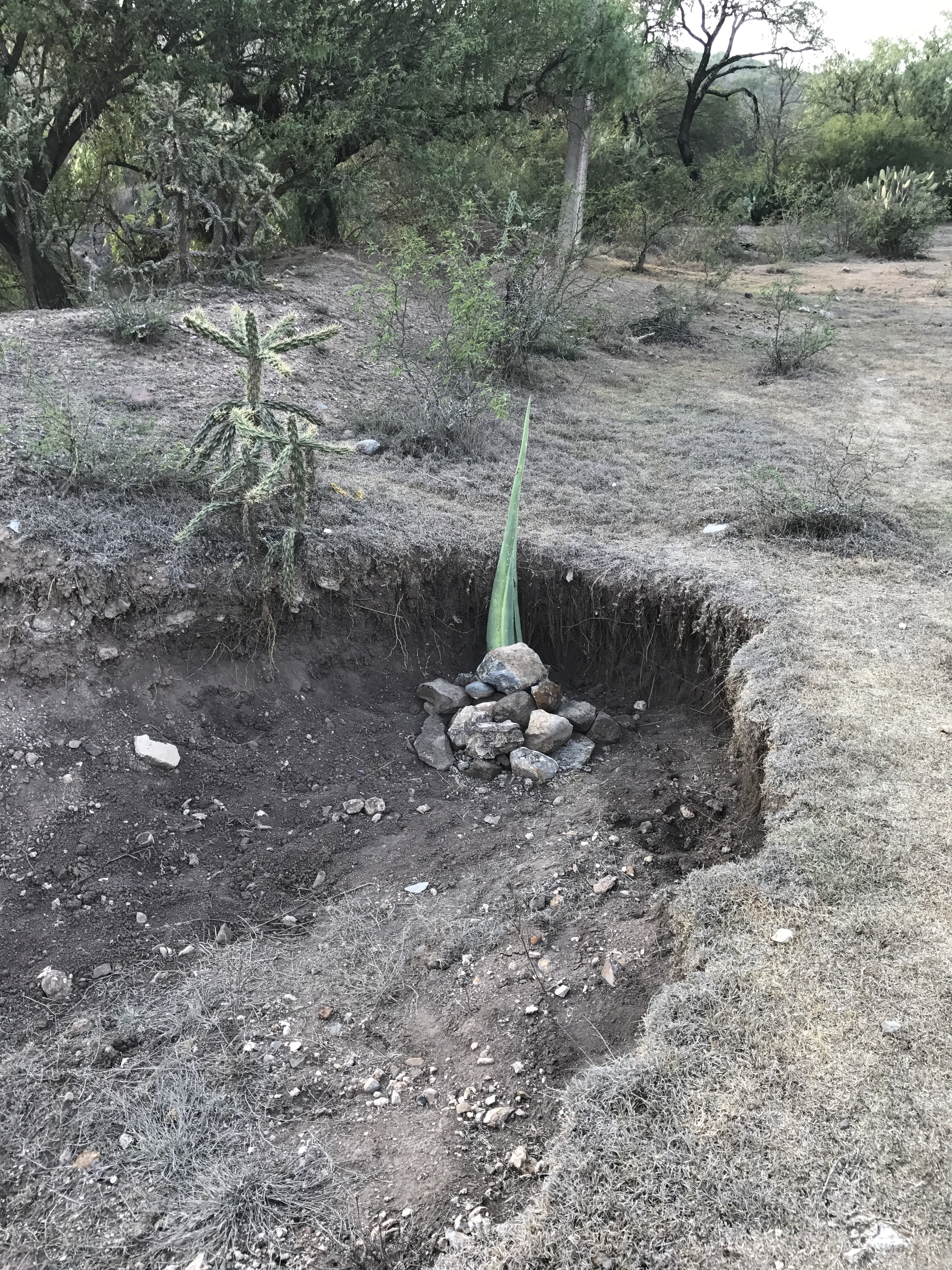 16 responses to “Visiting a vet in Mexico”