We have been in Guanajuato for quite some time now.  So long that we are familiar with schedules in the neighborhood and we notice when changes happen.  There have been some really fun events going on.  Here are a few highlights!

There is nothing quite like a baseball game on a Sunday afternoon!

Do you want to sit in the sun or the shade? 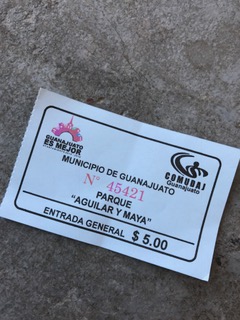 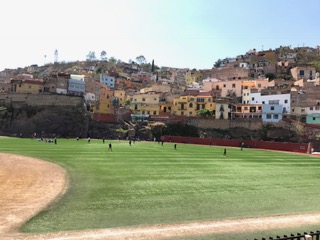 It’s a big field, but the view is awesome! 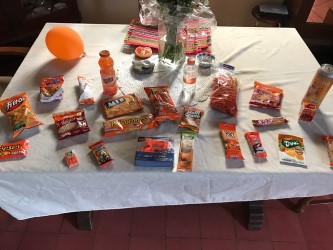 We are sharing a house with The Slow Dutchman during our time in Guanajuato.  Since Kings Day (Dutch holiday) fell during this time, we had to celebrate by wearing orange and distributing all of the orange snacks we could locate.  Happy Kings Day!

Reviewing the website Meetup.com we found a lot of great events in the city.  This was a musical performance by local youth held at an outdoor, vegetarian restaurant.  Interesting venue, good music, delicious food!

And of course, we had to become familiar with the local coffee shops.  Readers who know Mike, know that coffee is an important part of his day—- all day! 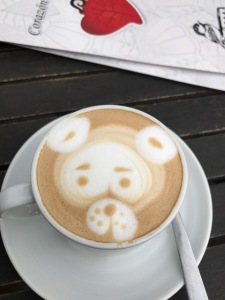 Along with our Spanish Language classes we attended weekly conversation exchanges.  These really were just an opportunity to hang out with our teachers at the bar! 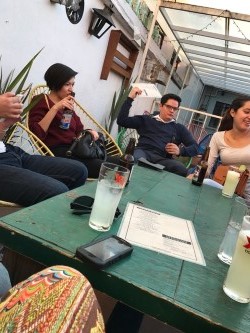 Luckily our teachers were awesome and we enjoyed our time with them, both in class and out of class!

While walking around and watching street performers we also watched this wedding tradition take place!  It seems that the local practice is for wedding parties to wander out into the public areas, walk along the streets and have their photos taken.  The crowd starts chanting “beso” and the newlyweds are expected to kiss.  This happened twice while we were watching a circus performer on the street (you can see his equipment on the ground).  He stopped his act to allow the wedding fun to pass by!  These are two different bride/groom couples that walked through within 20 minutes of each other.  Each wedding party added another 30+ people to the sidewalk crowd! 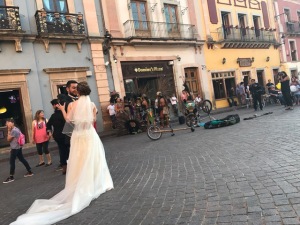 The streets of Guanajuato are filled with activity all the time.  There are pedestrians bustling about, vendors with small tables set up selling their wares, baskets of bread for sale being carried on mens heads, wandering dogs, children coming and going from school and of course….. cars and buses in excess (see tunnels below)

But the streets become particularly interesting during a religious celebration.  Let me explain it as I came to understand it. ( I apologize if I am mistaken in this interpretation)  In almost every neighborhood there is a small church.  The churches are tucked away up (or down) the little callejons, which are the steep stairways and walkways that connect the neighborhoods of this hilly city.

These barrio churches are generally attended and supported by the folks that live in that neighborhood.  Here are some photos of the one near our rental (Barrio Saucillo)  It is located right up this little stairway. (click this link to open a new window and a view of Barrio Saucillo )

This photo series shows the image of the church from 60 feet away to the close-up of a broken window, then closer with each photo.  The final image is peering inside through the broken window

Each of these little churches has selected a particular saint to celebrate at some time during the year.  When this happens the barrio comes to life!  The dusty field near the church becomes the focus of a multi-day celebration.  During the day we watched a parade go by.  This included marching corps, costumed performers and religious effigies. 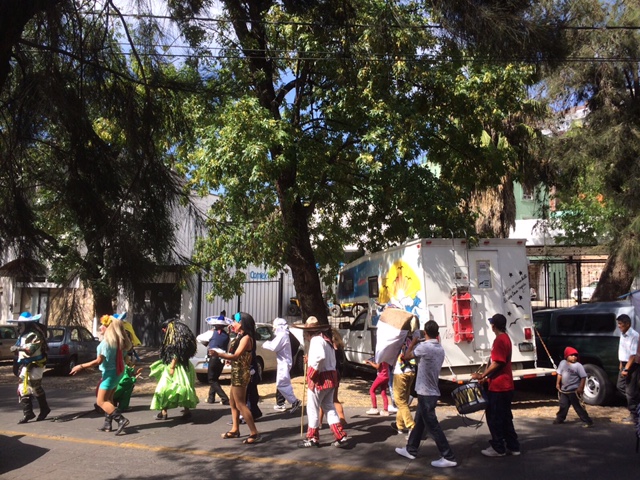 In the evening there was a large fiesta in the field near the church. The costumed performers danced an elaborate show on the field.  The drummers and horns played along.  There were vendors set up with junk tables, food tables and snacks.   The highlight of this fiesta was a pole climb event, that involves men climbing up recently planted telephone poles. The goal is to release bags full of groceries and household goods to their waiting families and neighbors!  Oh, and the poles are greased with a black, oily grease.  And to get up there they all work together, climbing on top of one another to form a sort of greasy pyramid! 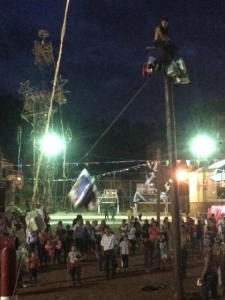 This event is punctuated by sunrise and sunset fireworks being set off at the church.  Because the celebration for each barrio, church and saint goes on for several days…… the fireworks do also!  These photos show that Seri (our old, senior, Catahoula dog) is not a fan of fireworks. One day she attempted to hide in the kitchen pantry.   But her favorite spot was in the shower with a dog bed under and over her! 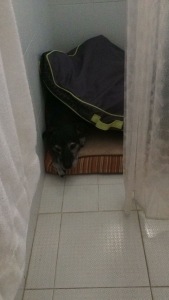 During our weeks in Guanajuato the camper has been parked across the street from our rental house.  We go into it daily to check on things, get clothes, shoes, food or other supplies.  One day we went out to find that the little store across the street had placed their ice cream sign in front of the bright, bold colors of our camper.  It is rather eye-catching, isn’t it? 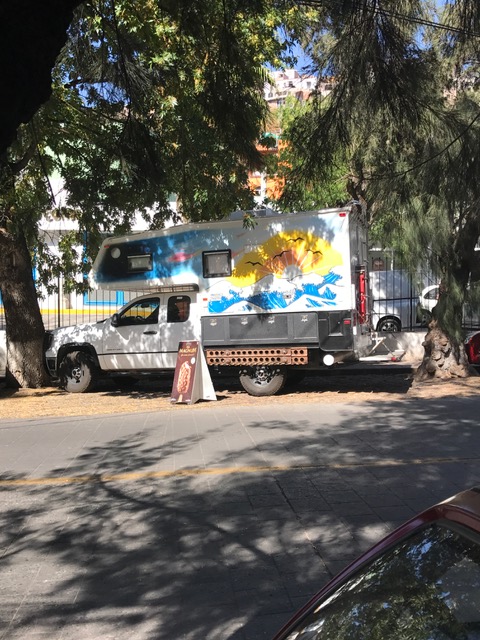 So much of Guanajuato is old, traditional and worthy of preservation.  So when traffic became an issue, the city decided to add tunnels instead of streets.  Here is a movie that attempts to illustrate the length and complexity of the tunnel system under this city.

Our time in Guanajuato is drawing to a close soon.  We have had a great time with Spanish school and city explorations.  We have learned more about the language, the culture and the customs.  And we have become quite comfortable and familiar with this terrific, historic city.

Thanks for reading and following along.  More posts coming soon as we discuss visiting a veterinarian in Mexico with Seri.  Then we are back on the road……..