As we passed through Oregon again we made a few stops along the way. Our target was the Huckleberry Jam music festival in Idaho with Michael Franti as headliner. This would be our 6th Franti show! Yep, we are big fans. You may know him for this song- Sound of Sunshine  The real bonus would be that we could attend with our friends from Boise. But there were a few more things to see and do in Oregon.

We stopped for Tillamook cheese and ice cream

The Oregon coast is always photogenic

One of our stops included a lakeside walk for the dogs

which wore Seri out

At a friends home we toured the wide variety of vegetables, berries, flowers and recreational plants in their greenhouse. 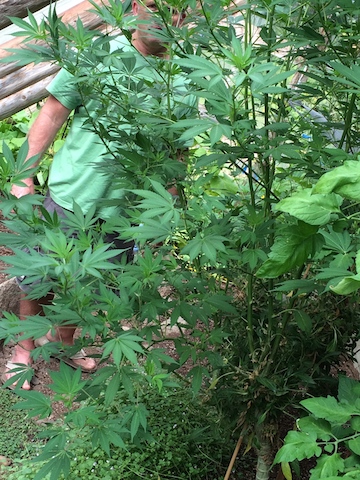 We took some vegetables for the road, but left the recreational stuff for someone else to enjoy!

One of our more delicious stops was at a Dutch Brothers coffee stand in Oregon.

This coffee chain is the employer of two of our wonderful kids (kisses to Ryan and Mel) and we try to swing through whenever it fits in our day! Support DB when you come across one, keep our kids $$employed$$ ! (hahahahaha)

We camped in the Oregon badlands 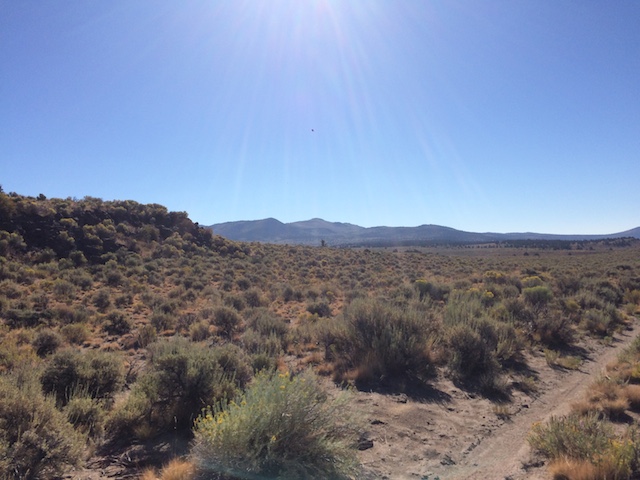 and paused for a photo on Van Lake Road, of course. 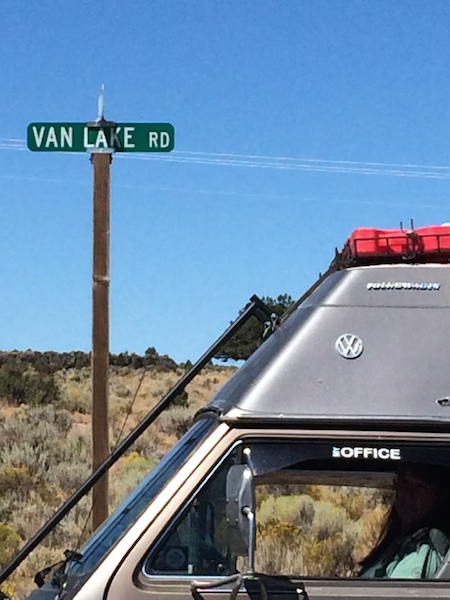 Finally, we were in Idaho. (Oregon is really quite large and took 2 days to cross!) We made it to our friend’s house in Boise with a problematic rear brake. At a gas stop we discovered that we could go forward, but the wheel locked up when we tried to go in reverse. Once we settled in with friends, Mike took the brakes apart and assessed the situation. It seems that a bolt had worked its way loose from the backing plate and wedged between the brake shoes and the drum. It was smooth going forward, but in reverse it would dig in and seize up the wheel. The drum is badly gouged and the brake shoes need to be replaced. But with the bolt out, the brakes would function and we were ready to go to the mountains.

But we made it! We were going to be able to attend the Huckleberry Jam! The friend’s daughter had agreed to dog-sit for us, so the dogs would be out of the heat and hanging out with other dogs. That freed us up to round up some tickets and head for the weekend of music and fun. Our friends would tent camp 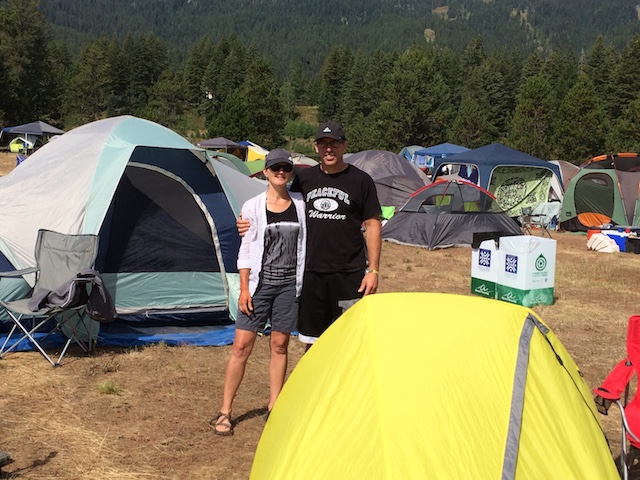 while we parked in the RV area

because the organizers felt that a VW van is an RV in this situation. You can see how well we fit in with the rest of the RVs! We thought she looked like a rose among the thorns!  But it was a great location, near the main gate and close enough to hear the music while sitting in the shade of our awning. And we could dash in the gates to use the port-potties, since they forgot to put any in the parking lot!

The first day of the fest included Brandi Carlisle 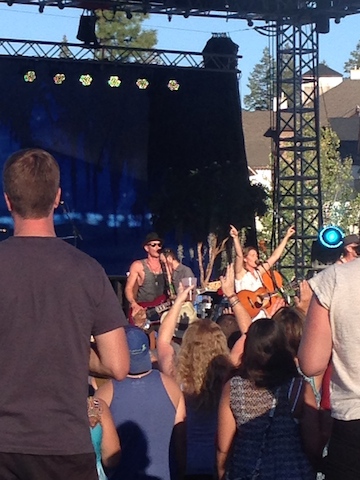 and she was great. We had sun and fun and festival food! The last group was awful, and we could hear them as we were falling asleep. The next day Geneva was feeling a little “off” and worsened throughout the day. She never made it through the gates to hear any of the bands. By 3pm she was in a lot of pain and willing to go to a nearby emergency room, as long as we could be back for the Michael Franti headliner at 8pm. We borrowed the friend’s car and headed to the ER. It did not work out the way she had hoped, and she was admitted to the hospital.

It would seem that kidney stones have been plaguing her for a little while, and chose this day to start their migration! Mike returned to the festival to pick up the van, say goodbye to our friends and catch the tail end of the Franti show

He spent that night camped in a hospital parking lot. But he wasn’t the only one there a hospital staffer was in a sprinter van nearby! Geneva was released the next day and we returned to Boise to pick up our dogs. We so appreciate having good friends at a time like this!

While heading across Idaho in the heat, we heard the back brake making noise again. We stopped in a parking lot and set up the shade so Mike could check it over.

Same wheel, and this time the adjusting fork was tightening and locking the brakes. He was able to loosen it enough to release and then we were back on the road again. This wheel will get a lot of attention when we get to Arizona again.

We crossed Idaho for the second time on this trip, and even went back through a small section of Wyoming!

Crossing out of Idaho was hot, but we had many more hot miles ahead of us to make it across Utah and on to Arizona.  Keep following these posts to hear the next part of our journey.

6 thoughts on “A bit of Oregon and some hassles in Idaho!”