We left Arizona bound for cooler climates.  Anywhere north that would offer us a reprieve from the heat, with unknown destinations in mind.  Ultimately we hope to get to Canada for a while.

So we finished the tasks on the van and loaded her up with three dogs, two adults and a teenaged boy!  It was fun to set up the house with a new passenger in mind. Seth is a very dear, young friend of ours that we are looking forward to traveling with.  There is so much adventure to show him and van life is the perfect way to do that.

We waited until evening, so we could drive in cooler hours.  Then we left Clarkdale through  Sedona and Oak Creek Canyon.  The drive offered better shade and lower temps right away.

Looking down Oak Creek Canyon towards Sedona as we wave goodbye.

And we immediately hit rain just outside of Flagstaff.  It was cool and refreshing and helped us feel as though the trip had really begun!

Driving across the Navajo Reservation at night was beautiful.  This is a photo of the night sky behind Vermillion Cliffs in the Marble Canyon area of Northern Arizona. 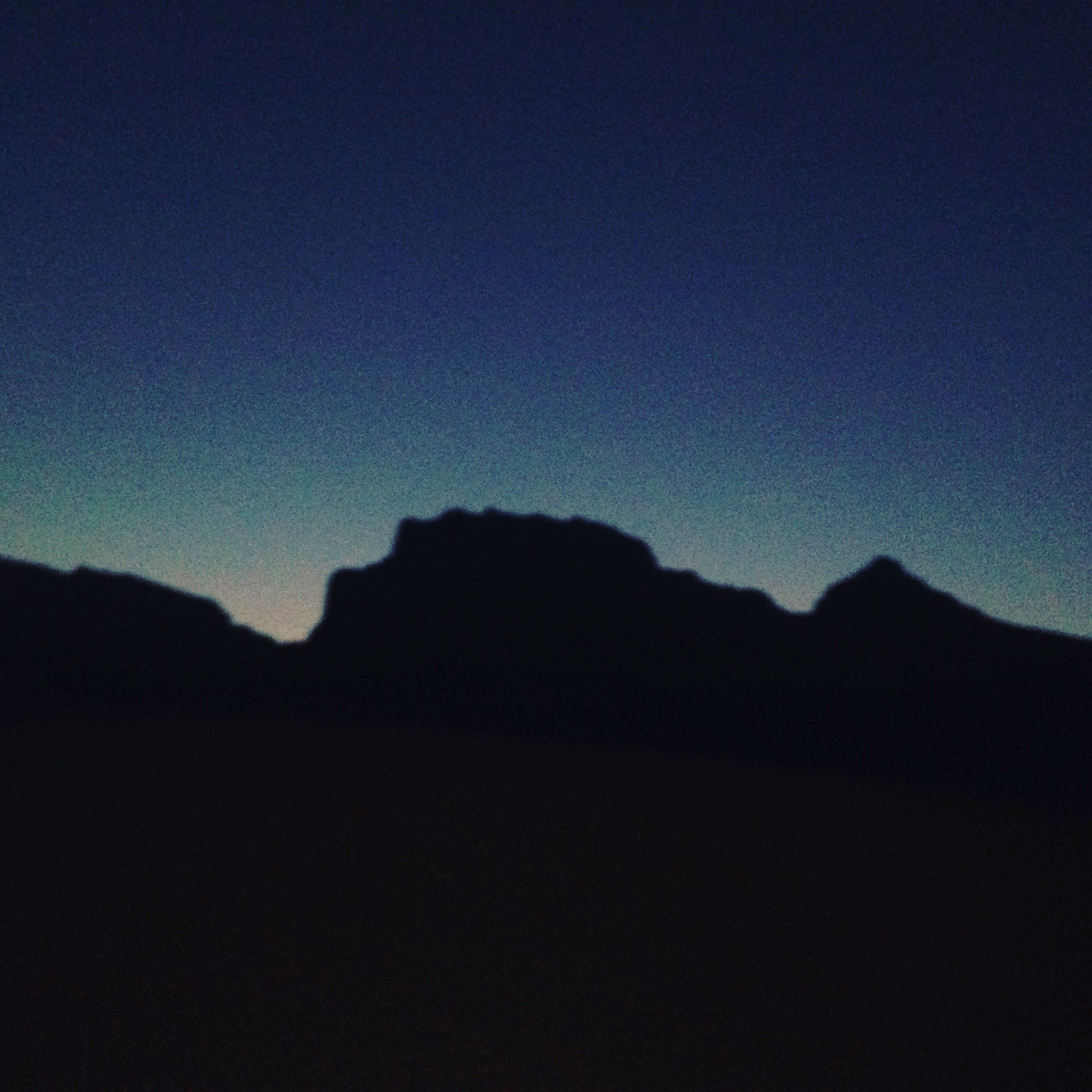 Our fist night was spent in Kiabab National Forest between Jacobs Lake and the North Rim of the Grand Canyon.  We had marked a great little camp spot last time we were here, and returned to it for two nights. 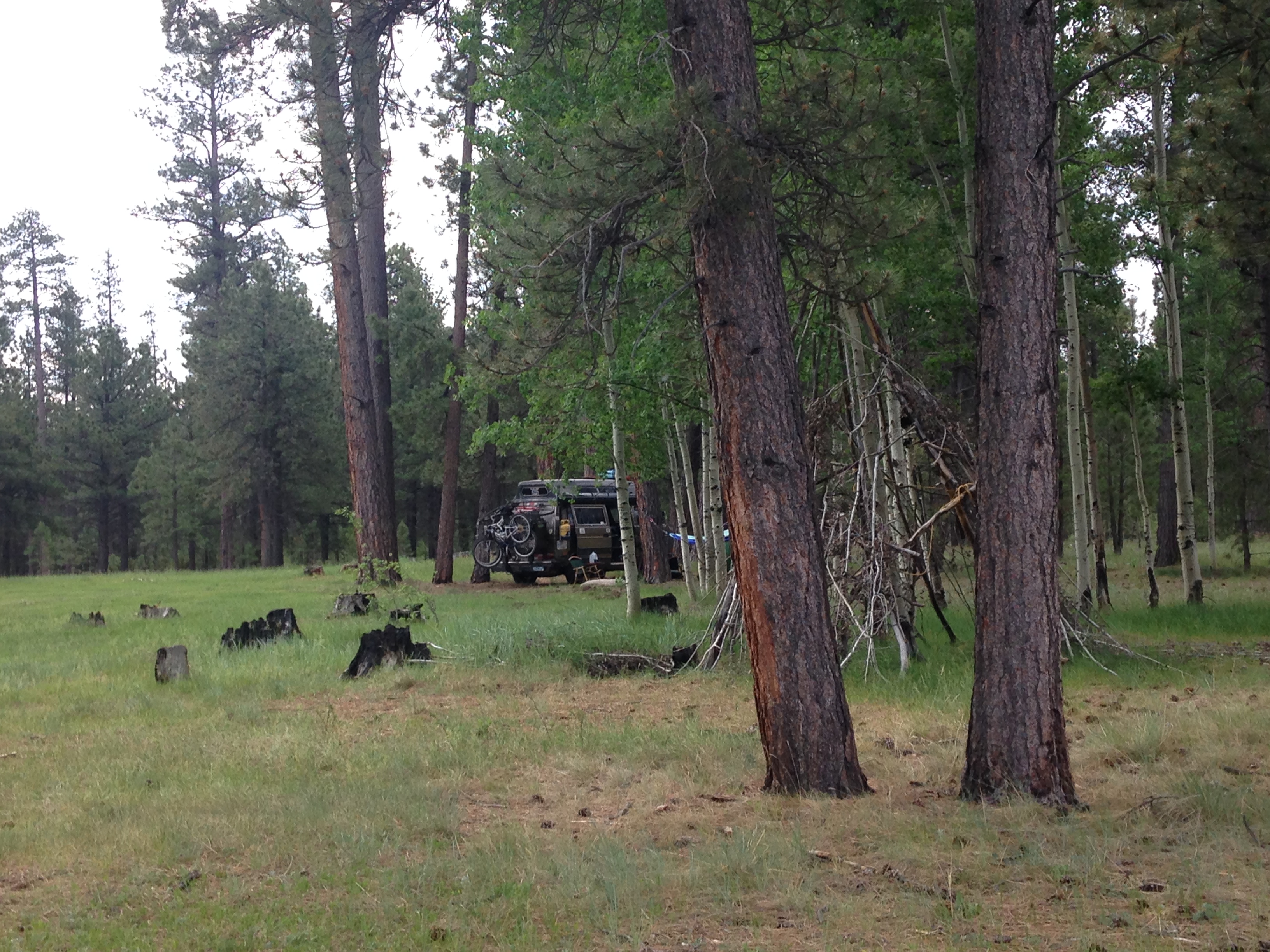 This location included a small grove of aspen trees and a little teepee structure.  I chose to offer a memorial to my Mom and Pop inside the little teepee of branches.  This was the last place we camped as we were headed to be with my mom last fall.  If I had known then, what I know now– I would have raced home to have a few more days with her.  But it felt good to drop off some ashes from both of them as Mike and I were leaving for the road again. 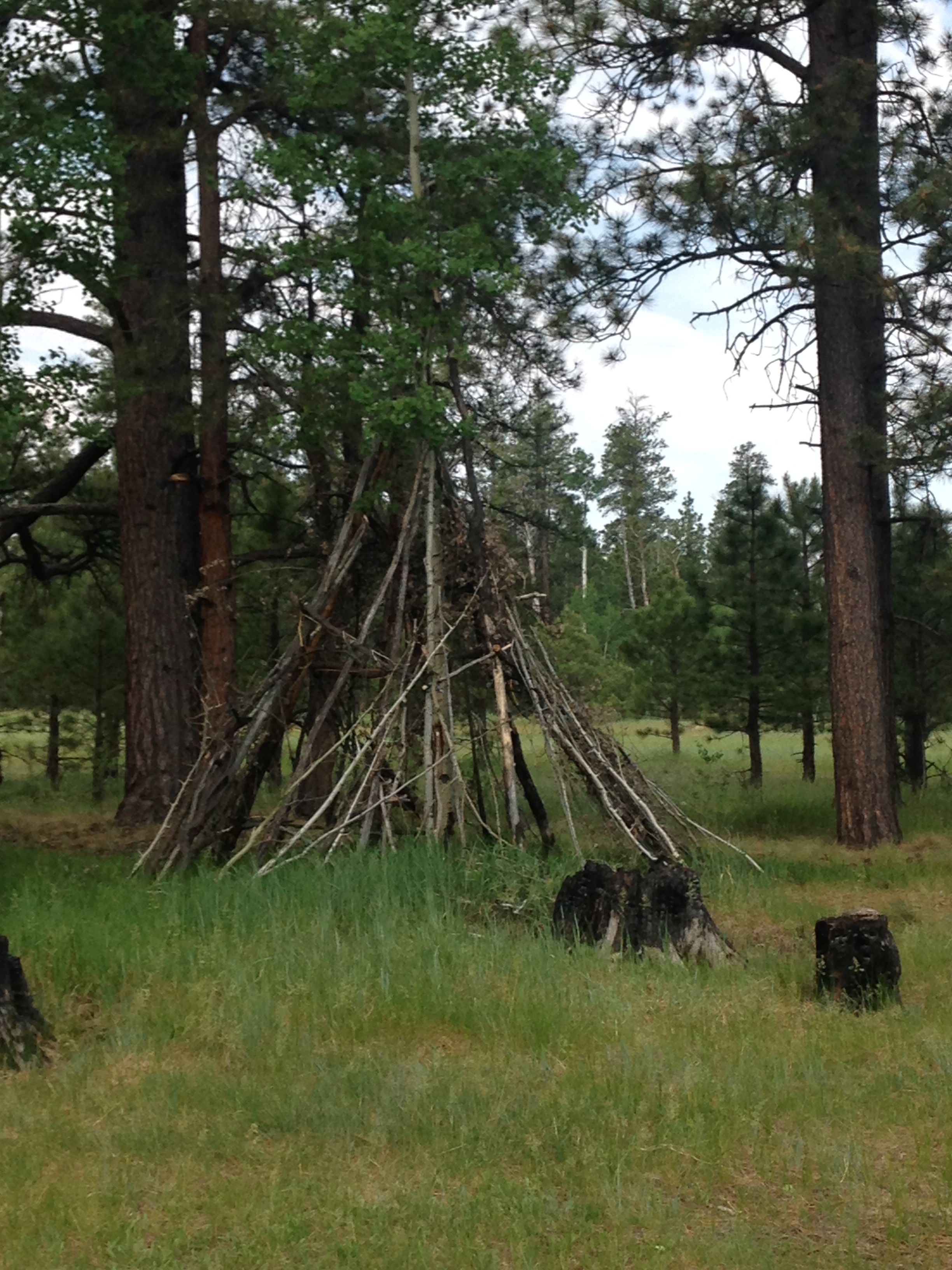 We took a run down to the North Rim of the Grand Canyon so Seth could look into the big hole from the other side.  It was a cool day, and the first hike down the trail was great.

Seth at the rim of the North Kiabab Trail inside the Grand Canyon.

Then we watched a storm roll across the canyon from the South Rim.

A deer near our camp in Kiabab

And returned to camp for the night. 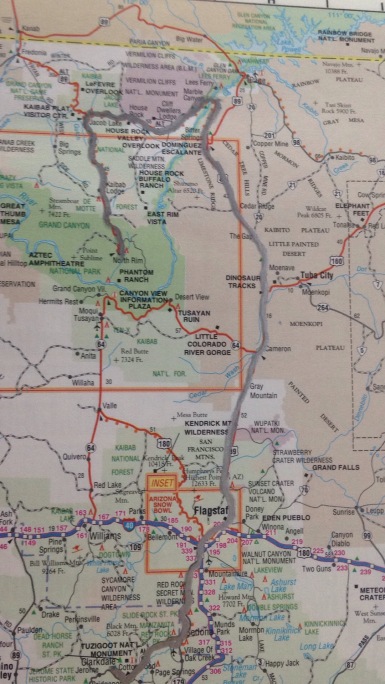 The next day we would head to the major National Parks of Utah to show him more of natures beauty!  Along the way we stopped to visit with another Vanagon owner. 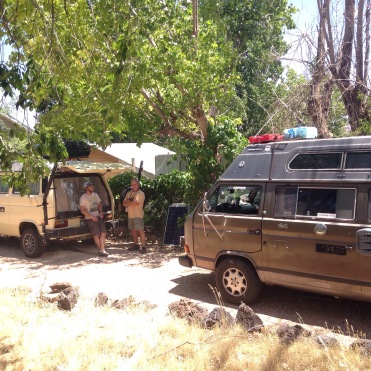 We showed Seth the cities of Hilldale and Colorado City and the followed the Virgin River through the canyons.

and then into the canyons of Zion National Park.

With a bit of searching we found a campsite just outside Bryce National Park.  This was on the banks of the Sevier River. 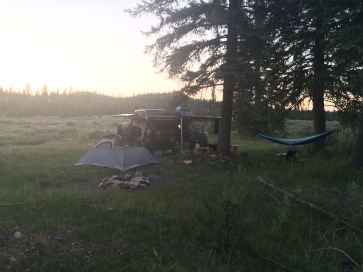 The fresh, cold stream offered the dogs a place to play and some great hikes for Seth and Mike. 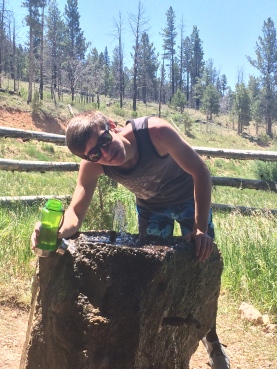 They also went mountain biking and Seth swam in the nearby Tropic Reservoir. 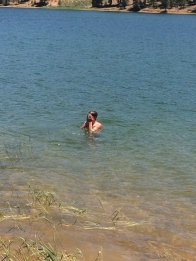 It was a beautiful spot for two nights of relaxing. 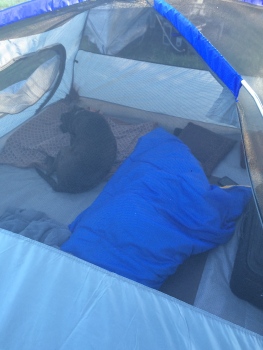 Zeb and Seth asleep in the tent!

A morning visit to Bryce Canyon National Park included Mike and Seth on a brief hike among the hoodoos.  See them down there at the curve in the trail?  (Mike in grey, Seth in dark blue)

In the parking lot we visited with some other van dwellers.  They have been on the road a long time, and enjoyed sharing tips about locations.

With a bit of research we worked up a surprise for Seth for the night.  We drove a little longer than we would like, but it was worth it for the surprise!  We pulled in to Diamond Mountain Speedway just as the racing ticket for the evening was warming up.  Geneva had secured permission to camp in the spectator lot after the races, so we set up and enjoyed the entertainment.  Junk food from the snack bar, roaring engines and lots of dust made for a fun night and an unusual campsite.

And when we woke up the next morning, the crowd was gone and we had beautiful views of the rolling hills of Utah around us, and the track in the foreground!    But all van dwellers need laundry, showers and porcelain toilets sometimes.  So we went in to Vernal, Utah and rented a night at a grassy, shady RV park.

Zeb is a big fan of well-manicured grass.  And it felt good to clean off the dust of the racetrack before heading to the nearby Dinosaur National Park.  We also took care of some business in town.  Even when we are on the road, folks are requesting stickers!

This batch included USA destinations as well as Canada, Netherlands and Sweden.  We took a drive up to Flaming Gorge and grabbed a geocache! 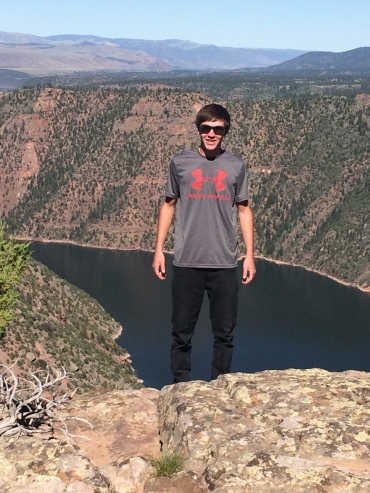 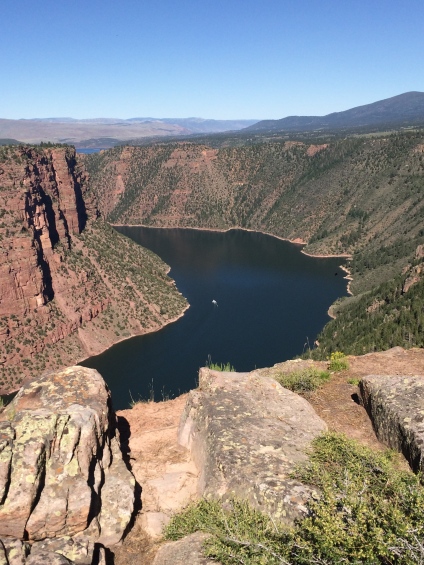 And then with all the errands done and sites seen, we concluded our exploration of Utah…… so we would cross into Colorado.

The route across Utah!

Our stop in Colorado would be Steamboat Springs.  Seth had mentioned an interest in some warmer swimming, and we knew this town had a world-class warm water park.  We were able to driveway camp with some former Vanagon owners. This location allowed us to enjoy the Old Town Hot Springs Pool one day

and then huge locally made cinnamon rolls

which were a delicious breakfast before we tubed the Yampa River the second day.  This river winds through downtown Steamboat Springs and our friends had the gear and the knowledge to make it fun!

When it was time to say goodbye we took their suggestion and headed toward King Solomon Falls. 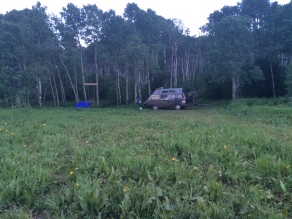 This was many miles of dirt road and a very isolated camp spot.  Here we found a great camp site with a swing.

and a large amount of flying, biting bugs!  In the morning we geared up and headed down the hour-plus hike to the falls.  This hike included a gravel scramble, rock climbing, rope handrails and a swinging ladder!  It was a lot of work to get there, but King Solomon Falls were an amazing example of the beauty of Mother Nature.  With snow-melt water pouring over carved rocks and towering pines and fir trees jutting out of the mountainsides it was gorgeous. 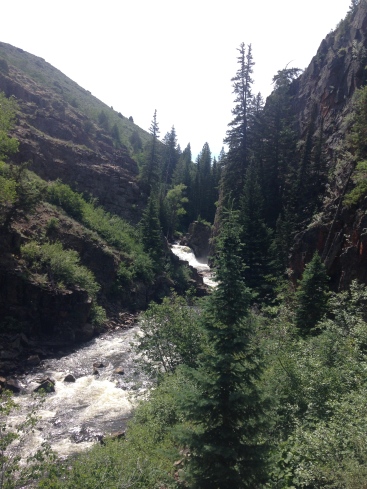 The final crossing to the falls required a waist deep wade across the swift-moving water while holding a rope!  This kept us from being washed away by the force of the Middle Snake River!  It was a pins and needles experience, as the water chilled our skin to numbness with each step. 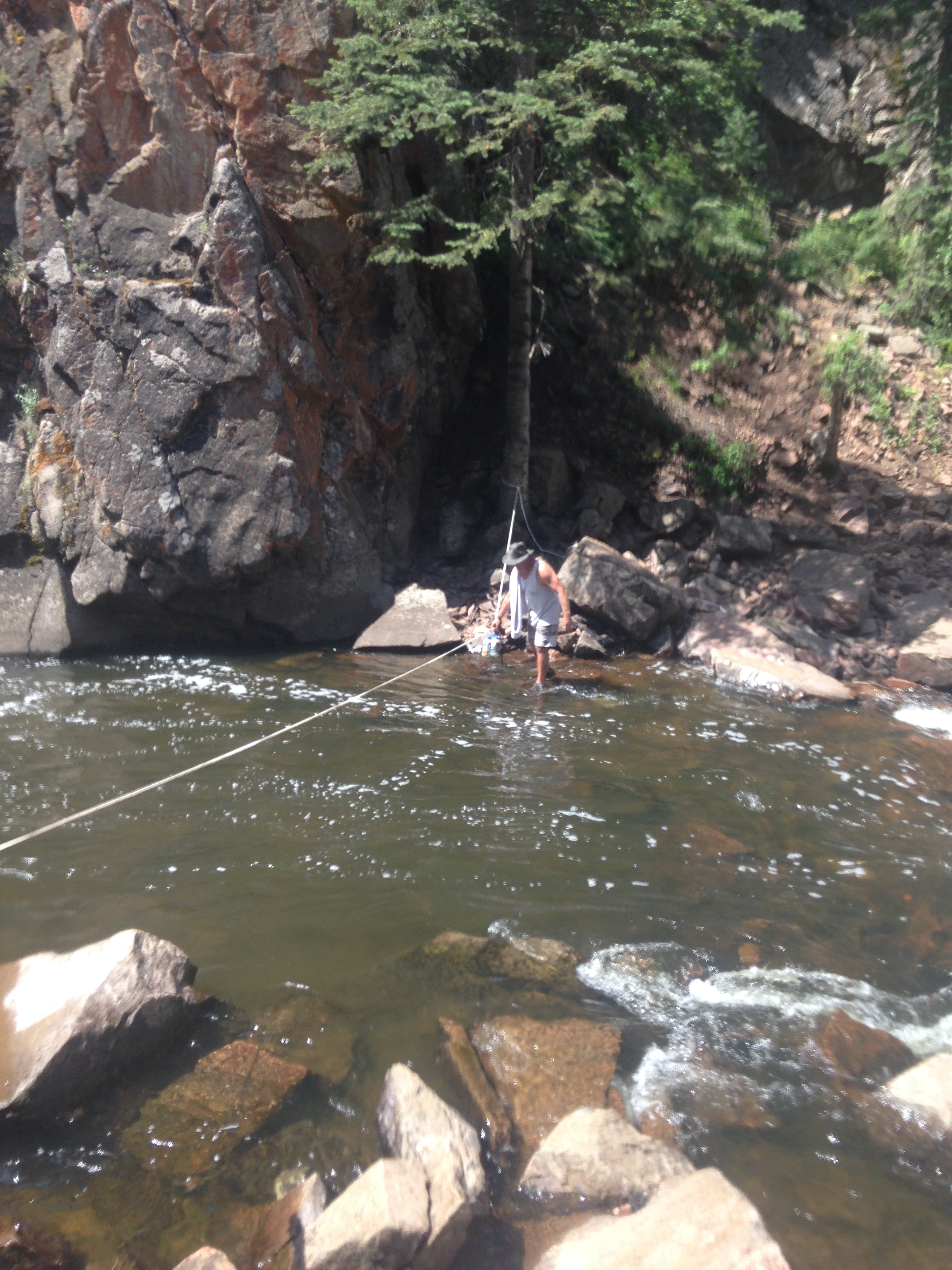 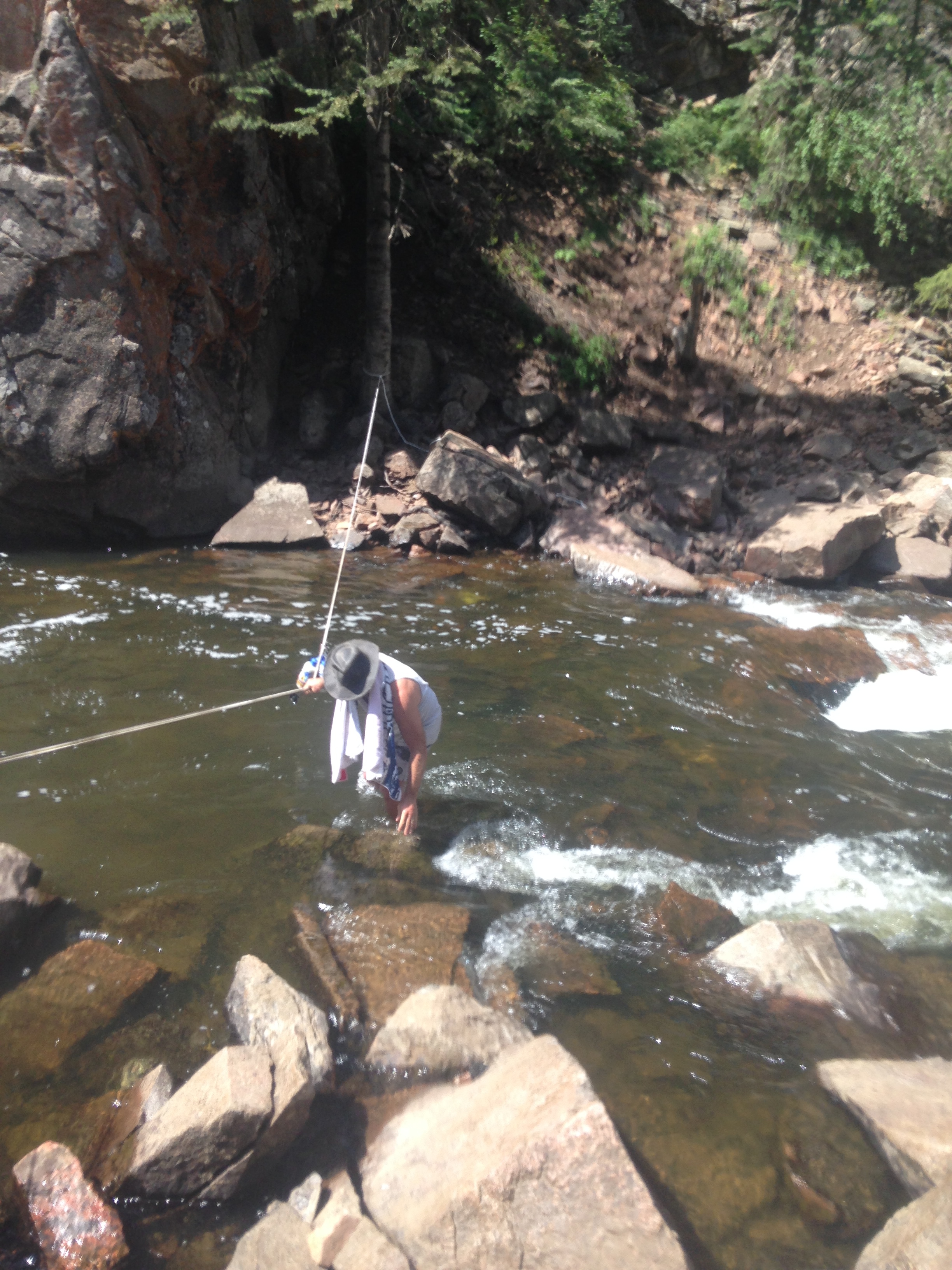 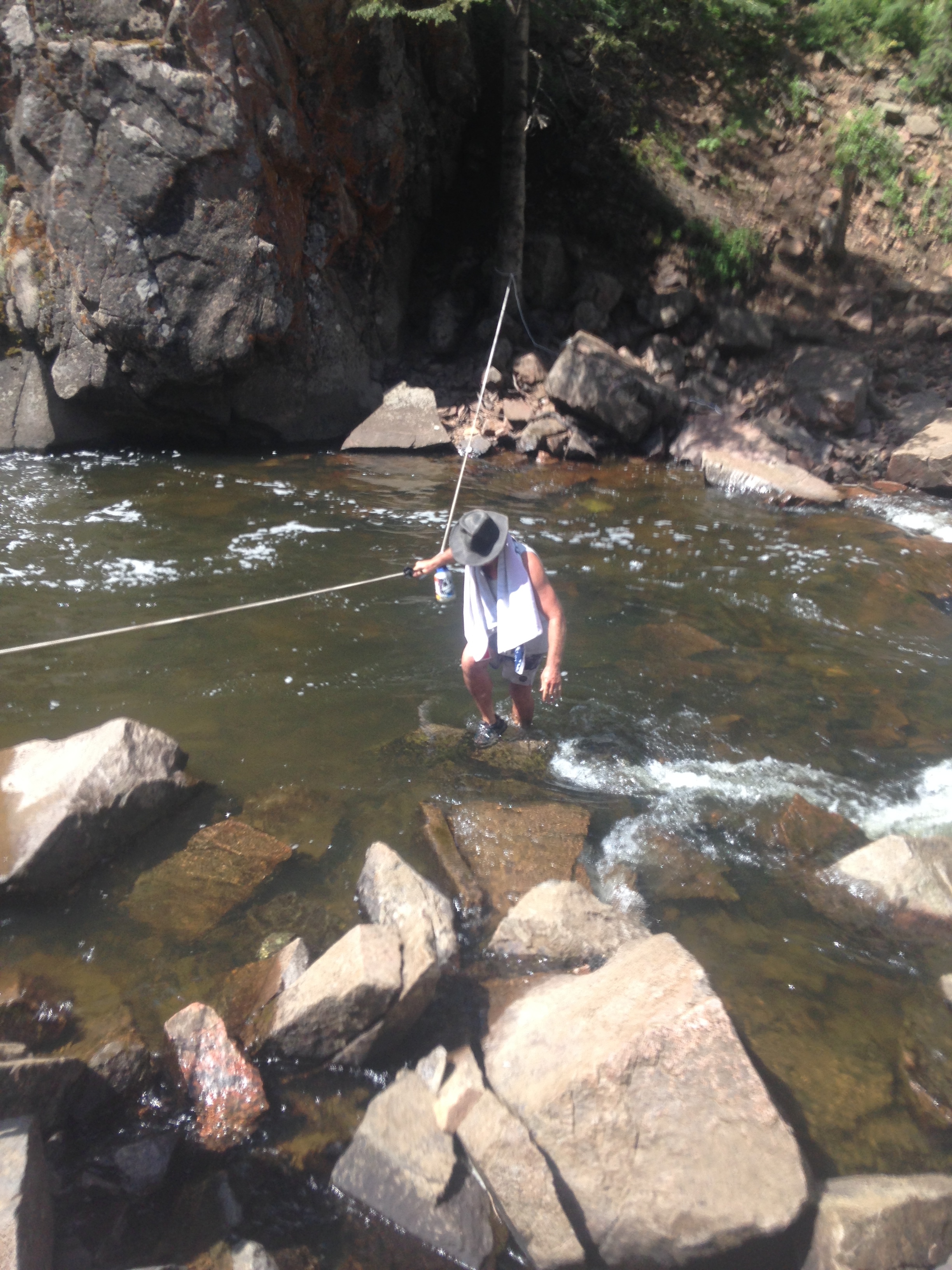 But Seth was feeling brave enough to plunge in and wash up!!  Brrrrrrrrrr 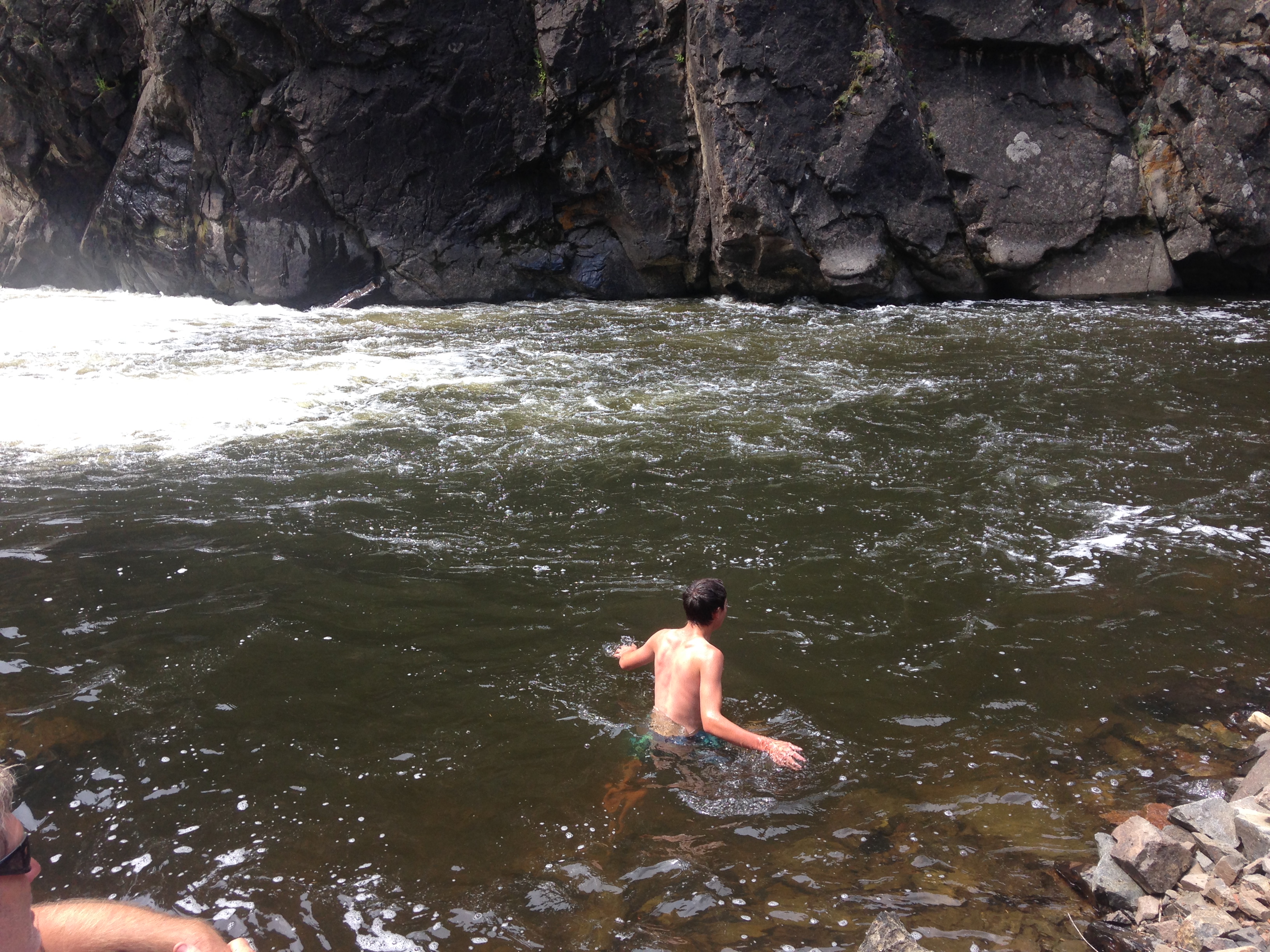 We exited Colorado on a small, dusty county road into Wyoming.

Through some back country towns we began to climb the Rocky Mountains.  Just before the Continental Divide we encountered snow on the roadside.  Seth made a snowball for the folks back in Arizona! 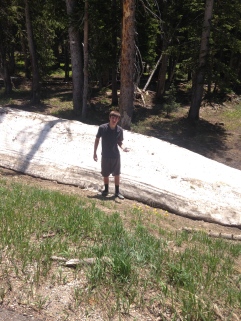 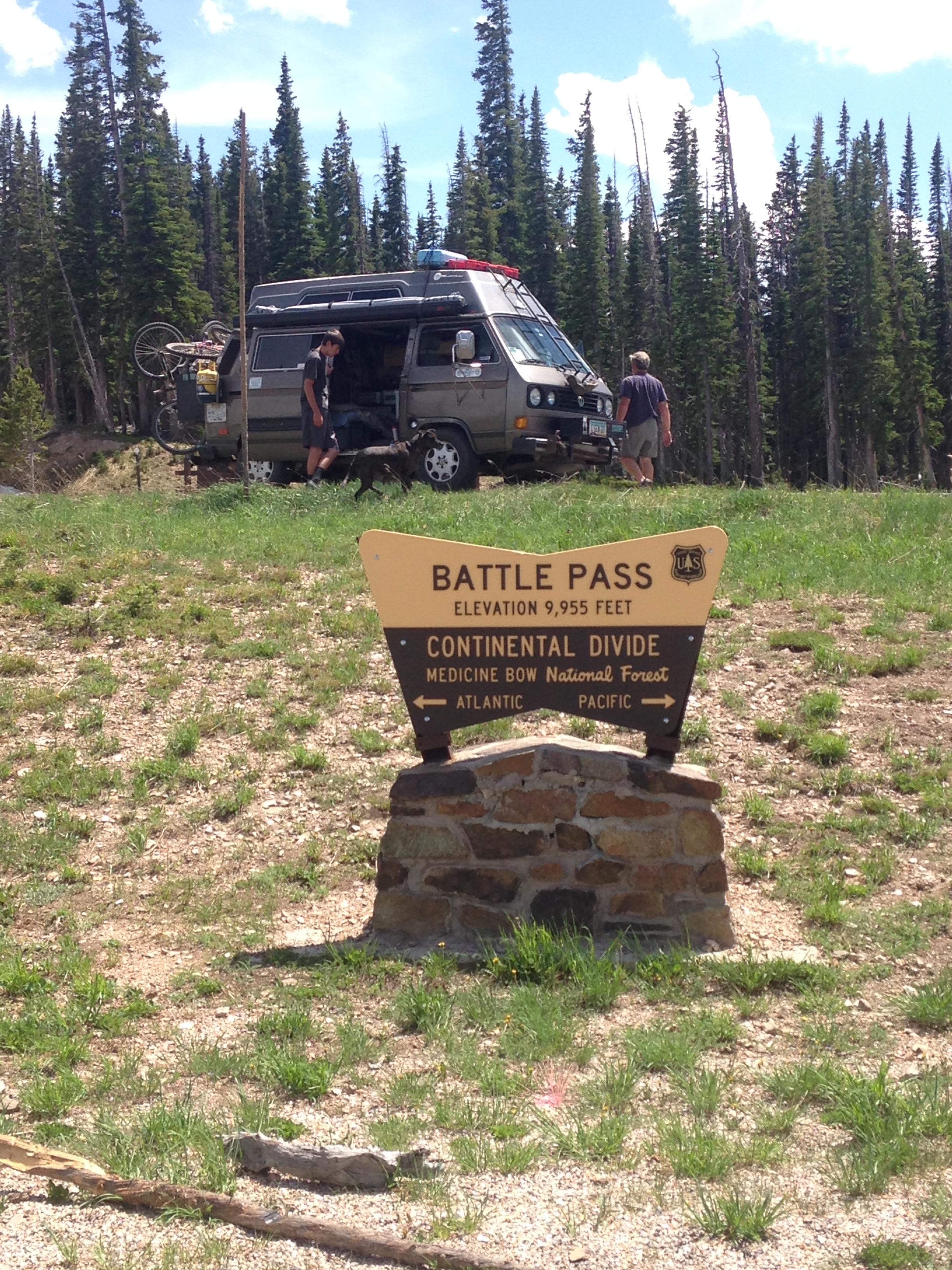 Our first night in Wyoming was spent on the open (and buggy) prairie near Rawlins and the Sinclair oil refinery.

The wide open spaces gave the dogs room to run.  The morning hike revealed antelope roaming the sagebrush.  And we even captured a secret photo of Mike doing the morning dishes at the campsite.

But this proved to be a juncture of change…. as Seth had decided that van life and this type of travel is just not for him.  We turned toward Jackson Hole, Wyoming (for the nearest airport) so Seth could catch a flight home. 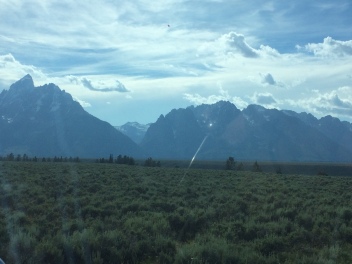 A glimpse of the Tetons as we prepare to say goodbye to our special passenger!

The well-packed van will drop a passenger, a bicycle and some bags and head off for unknown destinations.  Sign up to follow this blog and see where we end up next!

2 responses to “Lets get out of the heat of Arizona…..”