The beautiful city of Arequipa considers itself almost a separate part of Peru. It seems not too far from the mark, as this “Ciudad Blanca” (White City) has a very different feel than other cities in Peru. 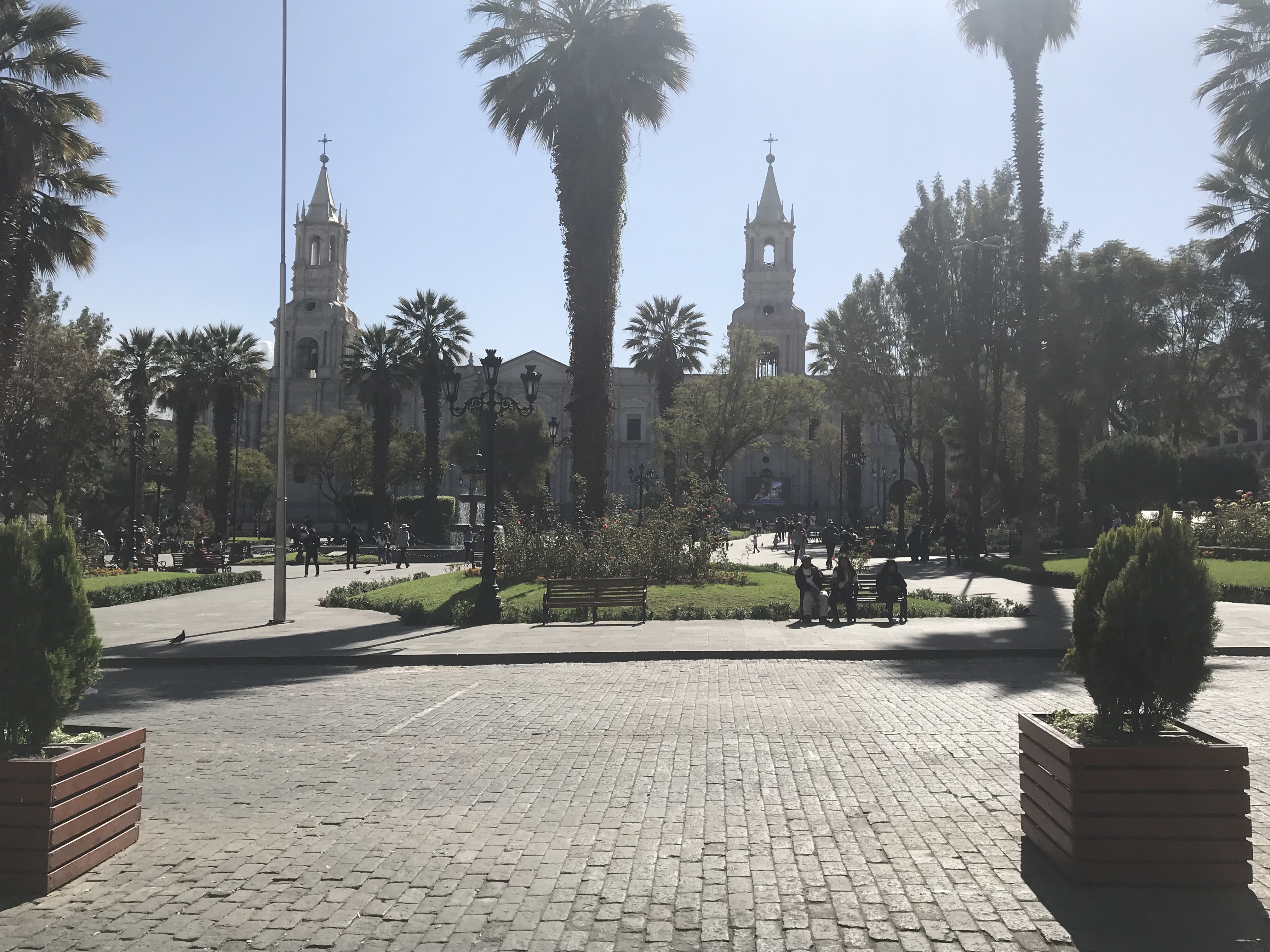 Much of the city is constructed of carved white stone, earning the special name and a clean appearance. The central plaza is surrounded by the typical buildings, a cathedral, municipal palace, and tourist shops. The arches, cobblestones, polished tiles  and wide streets add a stately appeal to the entire place. 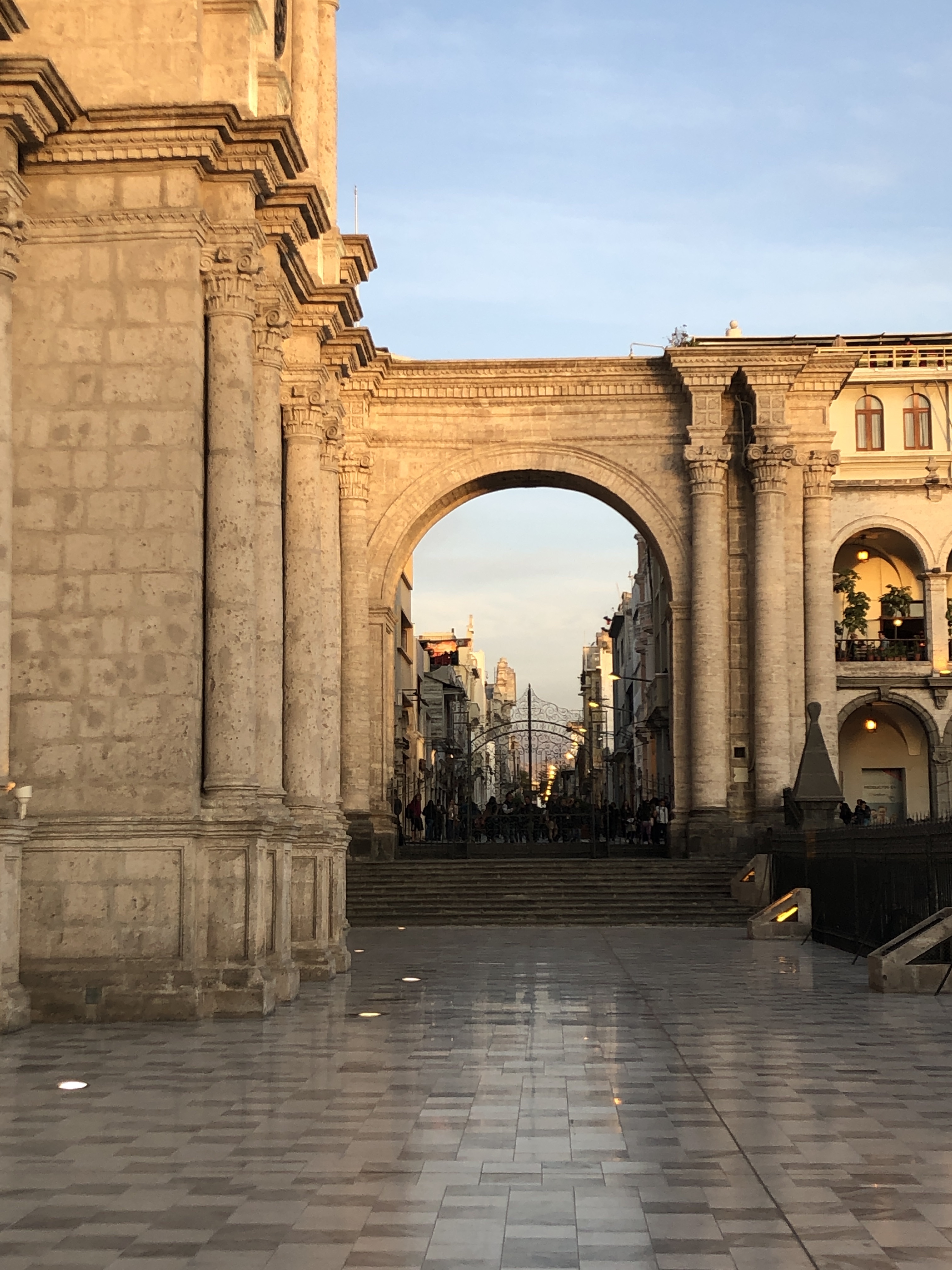 We sat in the park for a while, playing with Nica.

Then we were chased off the lush grass by a patrolling security.   We walked through town and looked at smaller old churches.

And we took a break in a café while the dogs cooled off under the seating.  Then later another break while they rested under a bench and we went geocaching nearby. 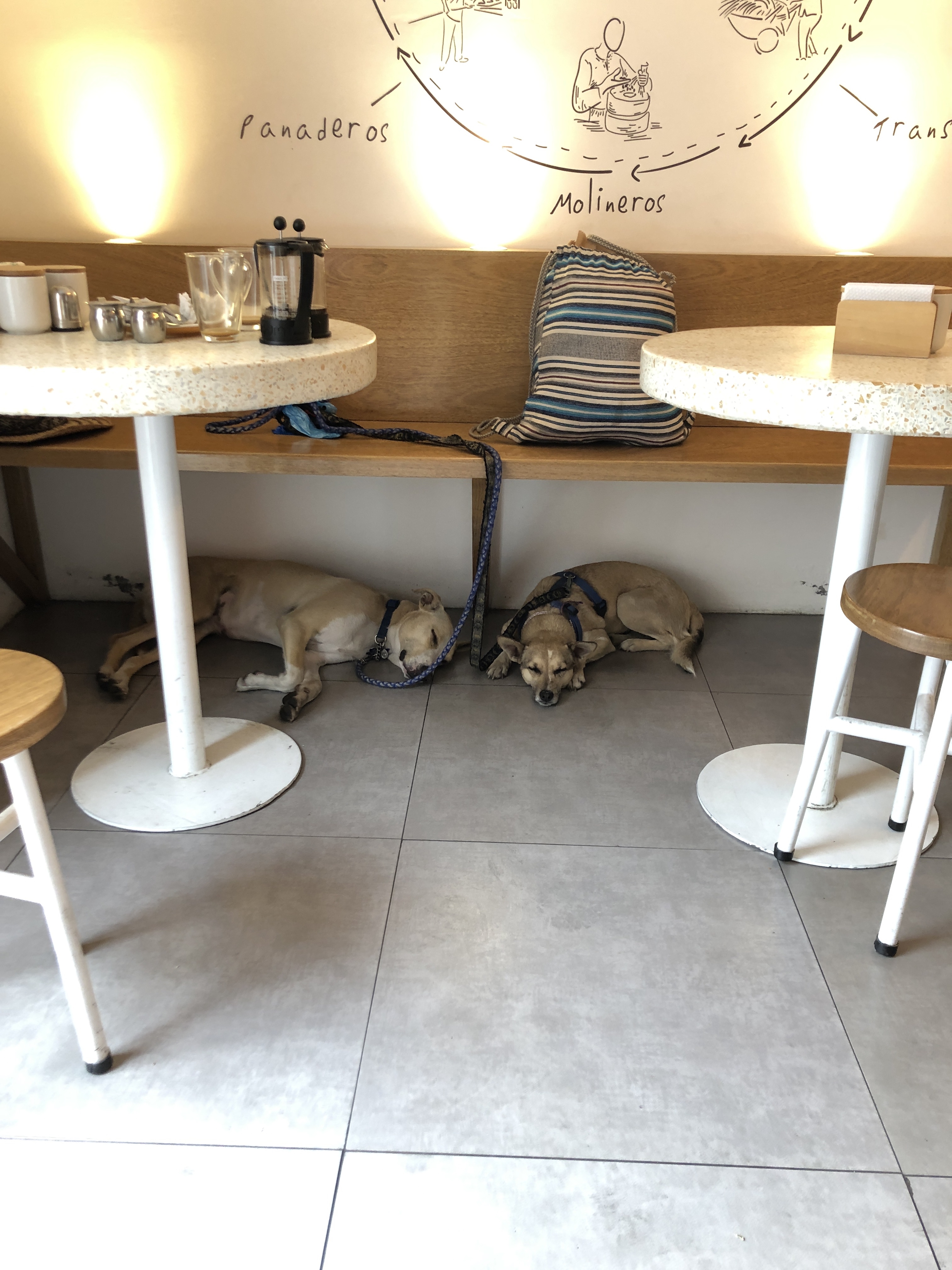 On another, cooler evening we stopped outside another small church and enjoyed a serving of hot tea made with area plants and herbs. Apparently sidewalk tea is a custom here. 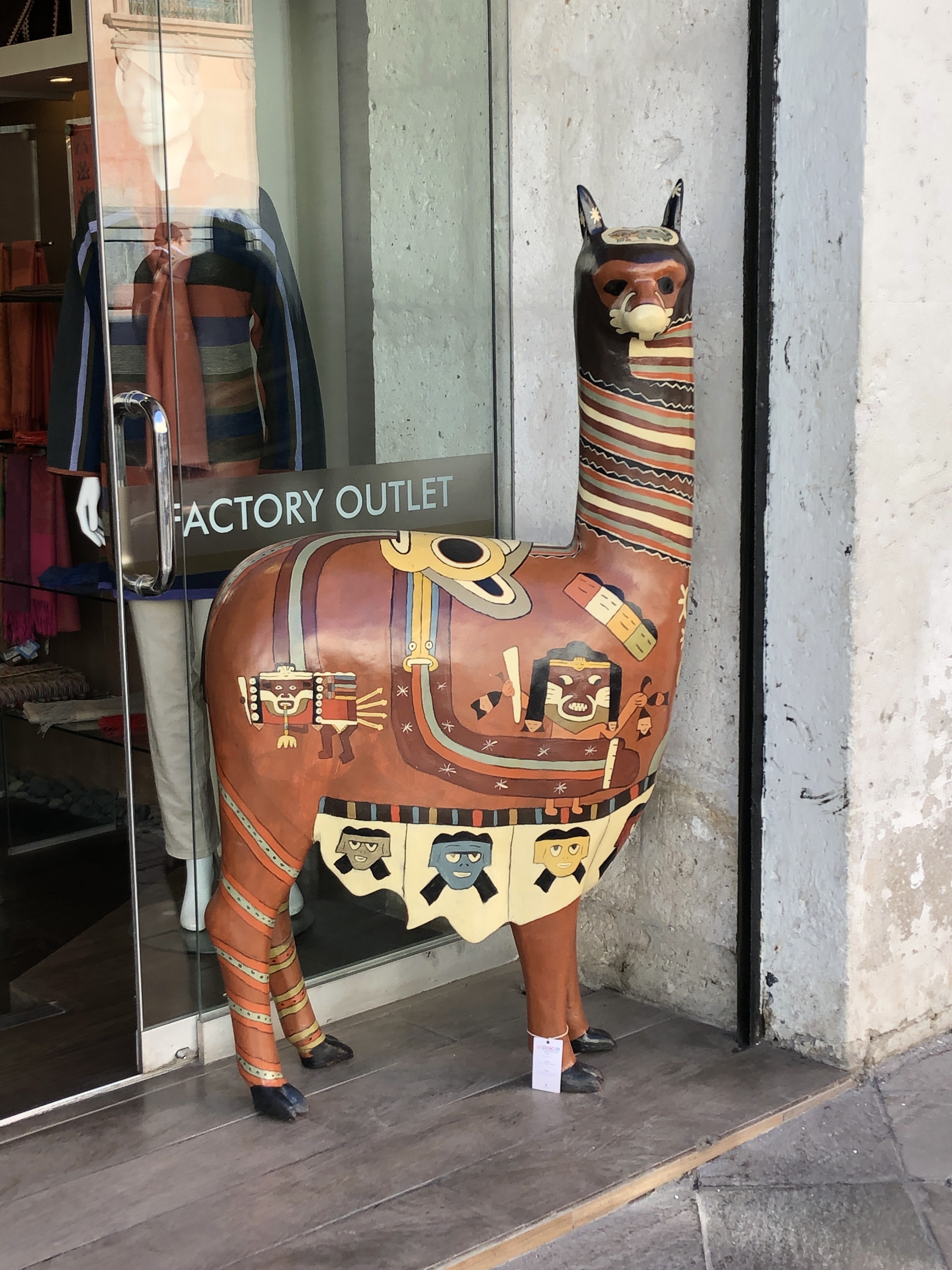 The cathedral at the center of Arequipa is particularly white and lovely.

At night it is lit and by day it is regal. The interior is ornate and polished. Clean and rich looking, it commanded a certain silence and we strolled through. 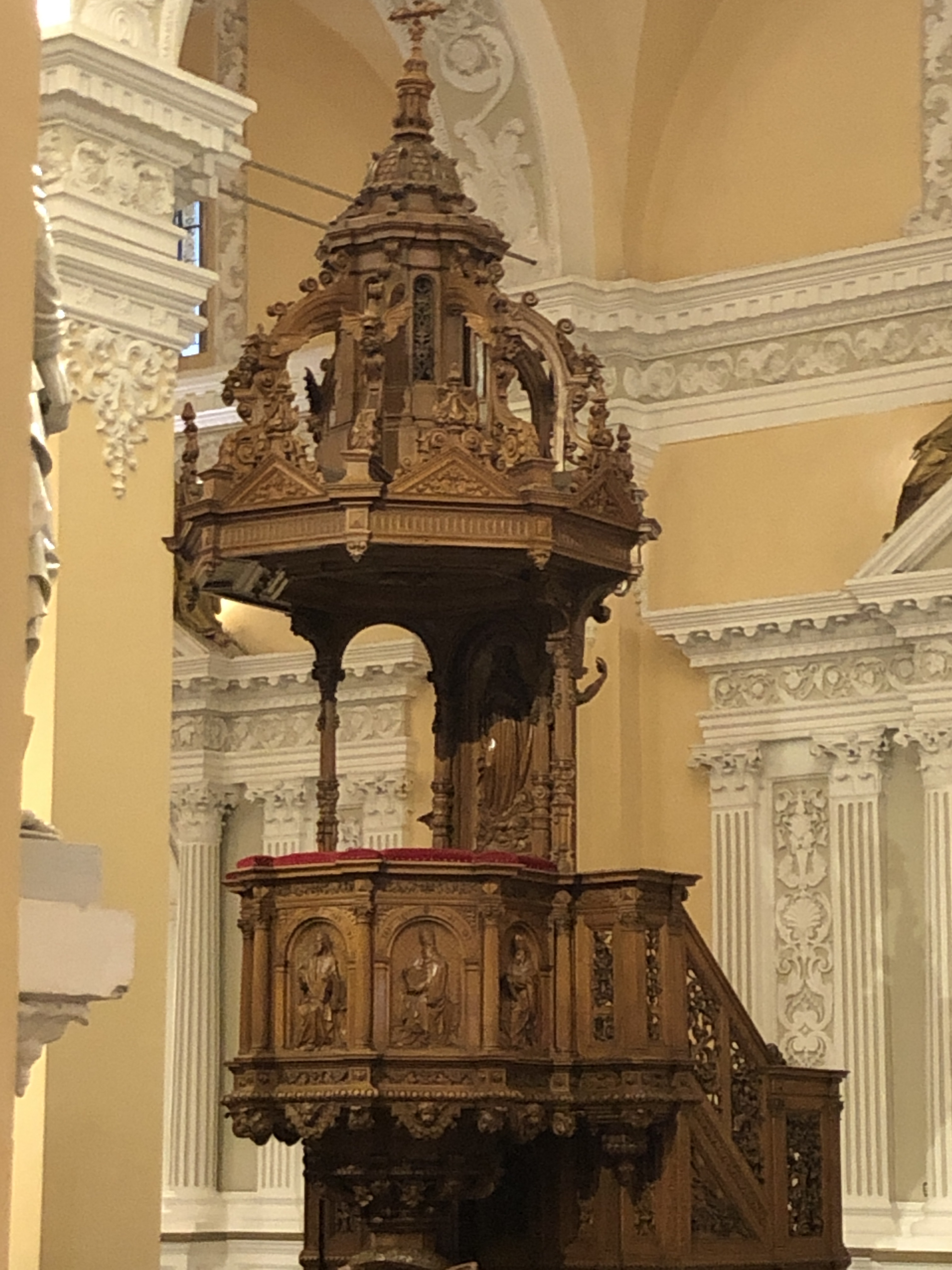 The real gem of Arequipa is the Monastery of Santa Catalina de Sierra, nuns of the Dominican Second Order.  This beautiful facility is generally described as a city within a city. It is an elaborate labyrinth of passages, living quarters, chapels and much more. The colors are bright and bold, and the opulence of the original nuns that resided here was too. 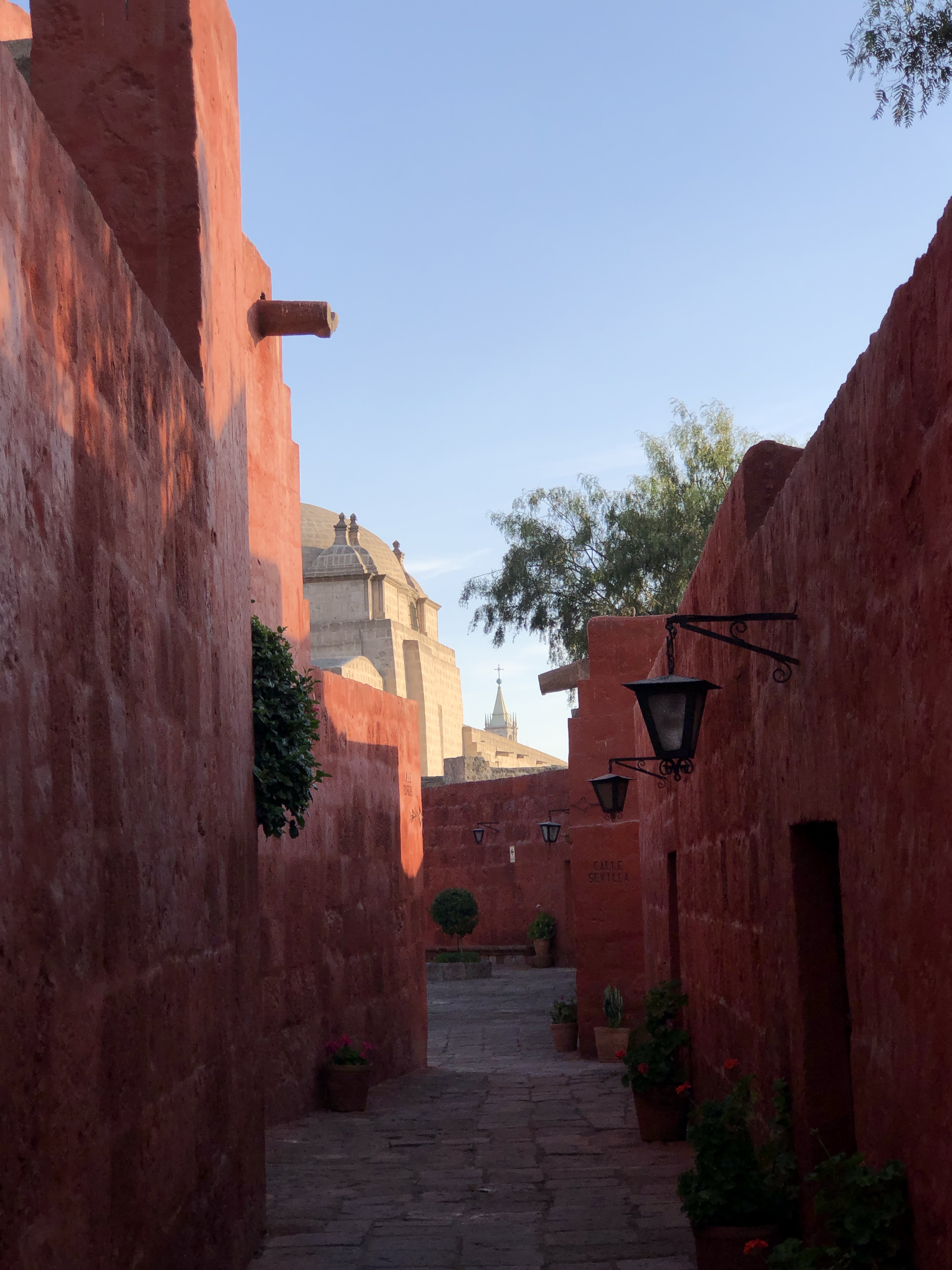 The nuns that lived here were typically the second-born daughters of the richest Spaniards in the country. Sending a daughter here meant earning the family a stairway to heaven. And keeping their daughter supplied with the fine china, artwork, textiles and servants that she was “accustomed to” meant she would stay and be a servant to a higher power and represent the family interests.   The museum is filled with opulent artifacts and the walls reflect the refined taste in style and decoration. 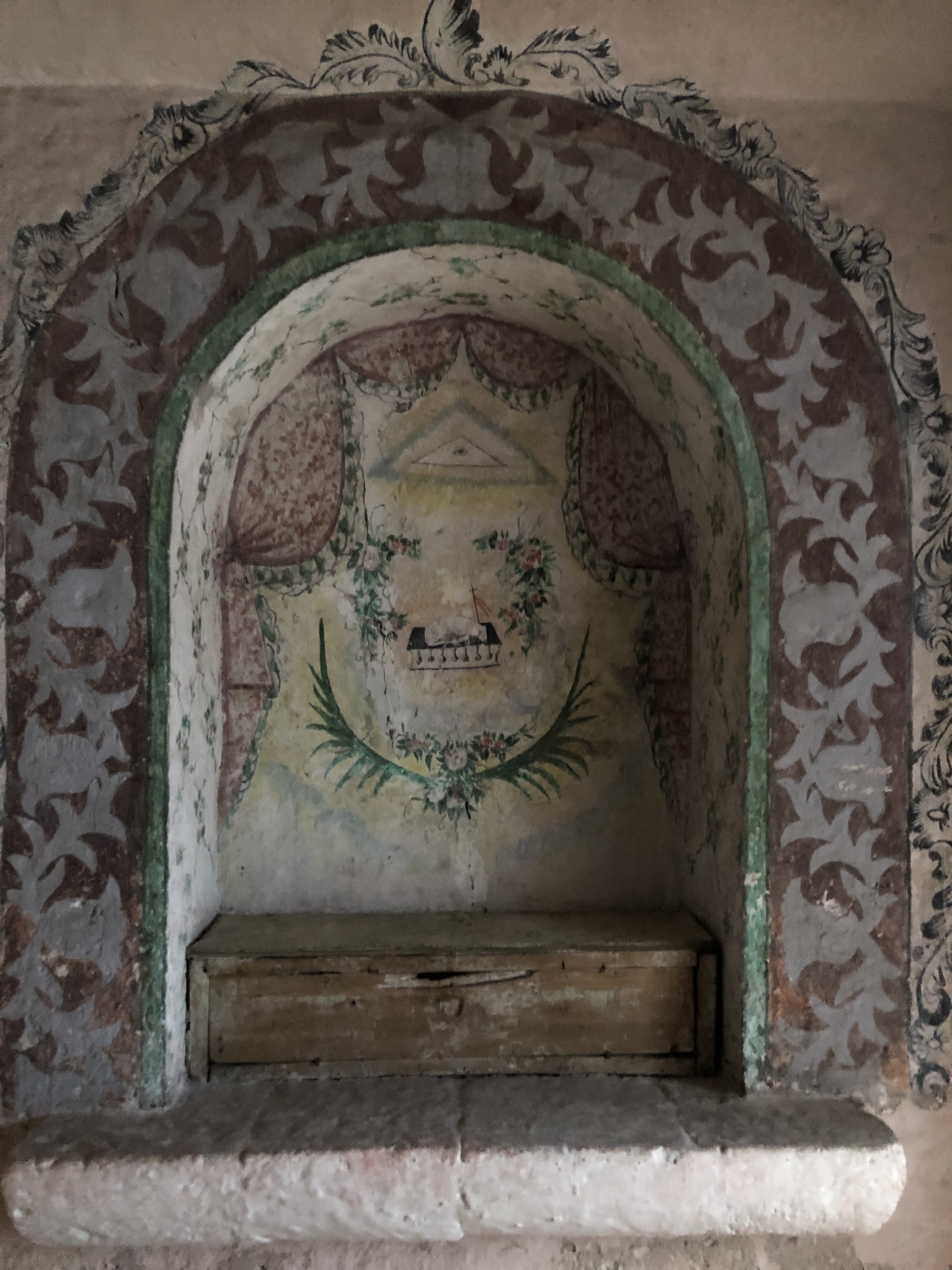 It is now possible to witness that views from the rooftops to the surrounding volcano mountains are beautiful, but the nuns living inside were not allowed here, they had little or no contact with life outside the walls of the monastery. 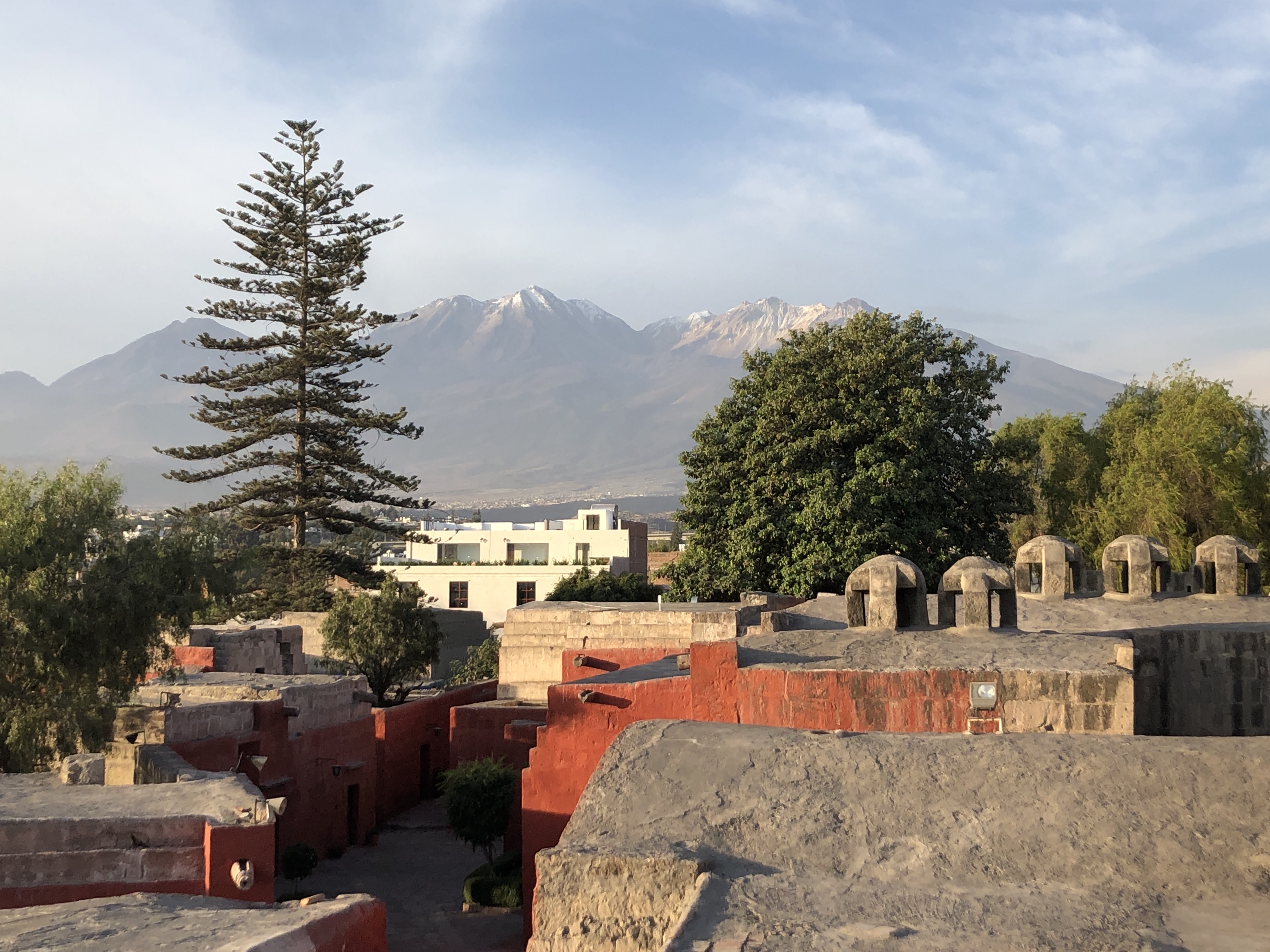 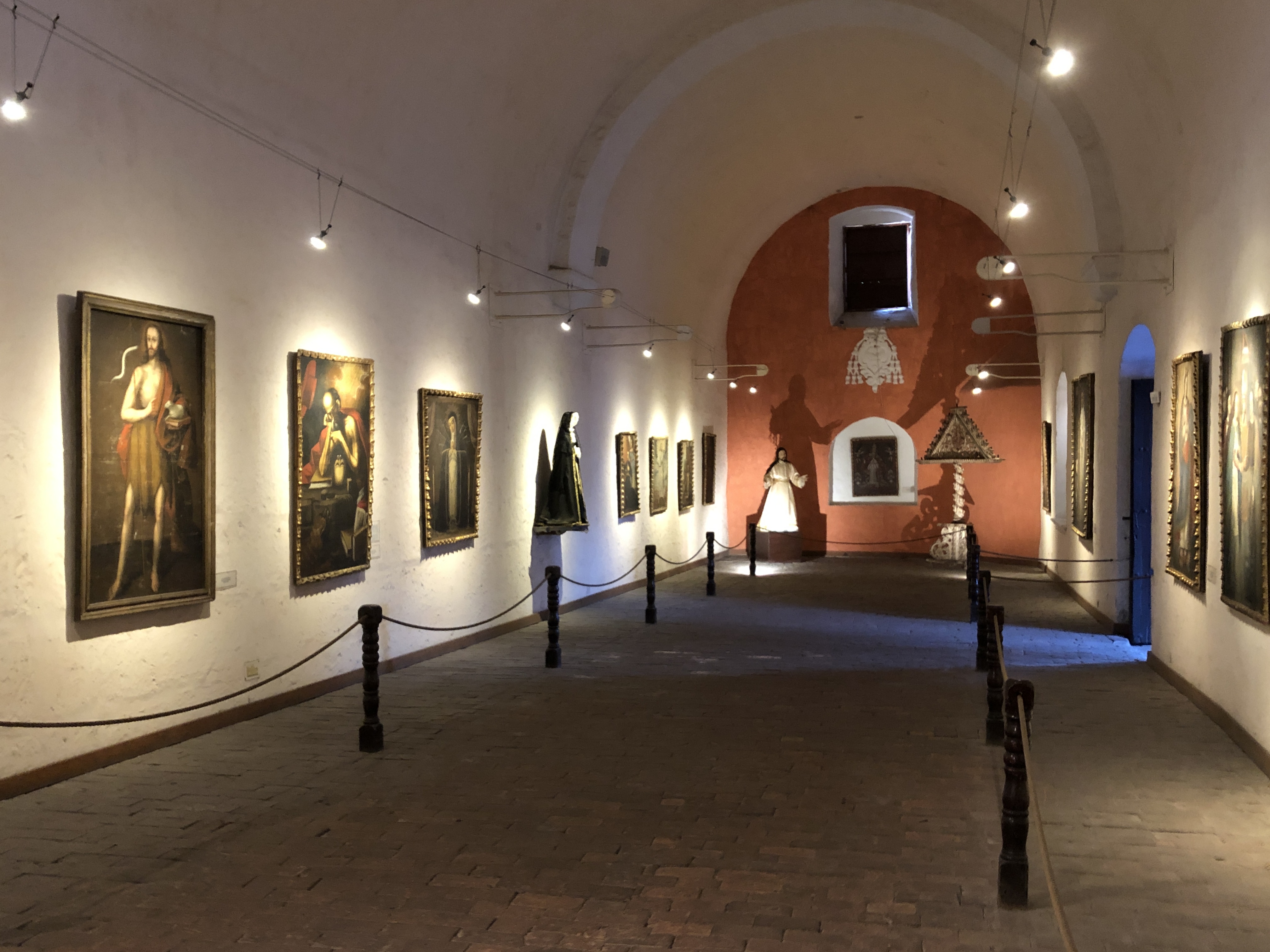 There is much valuable and fantastic religious art inside. And the Santa Catalina Monastery is still in use today by a handful of Dominican nuns who live and work inside a section of this small city.  Of course, no visit would be complete without a view of a nuns toilet! 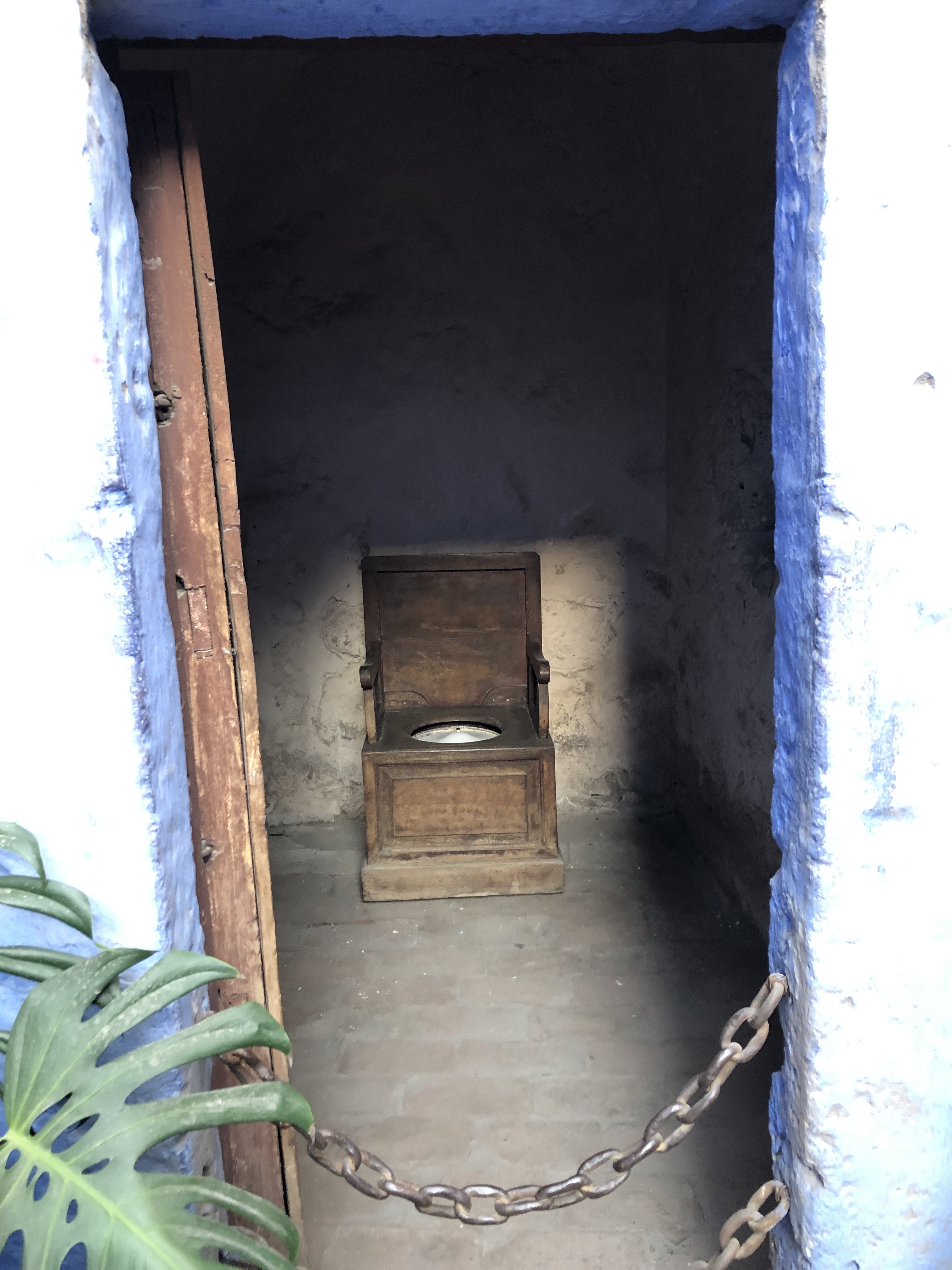 And speaking of toilets…

As we walked back to camp we noticed these humorous signs. Apparently the clean, white city has an issue with public urination. These warnings may help clean things up a bit! 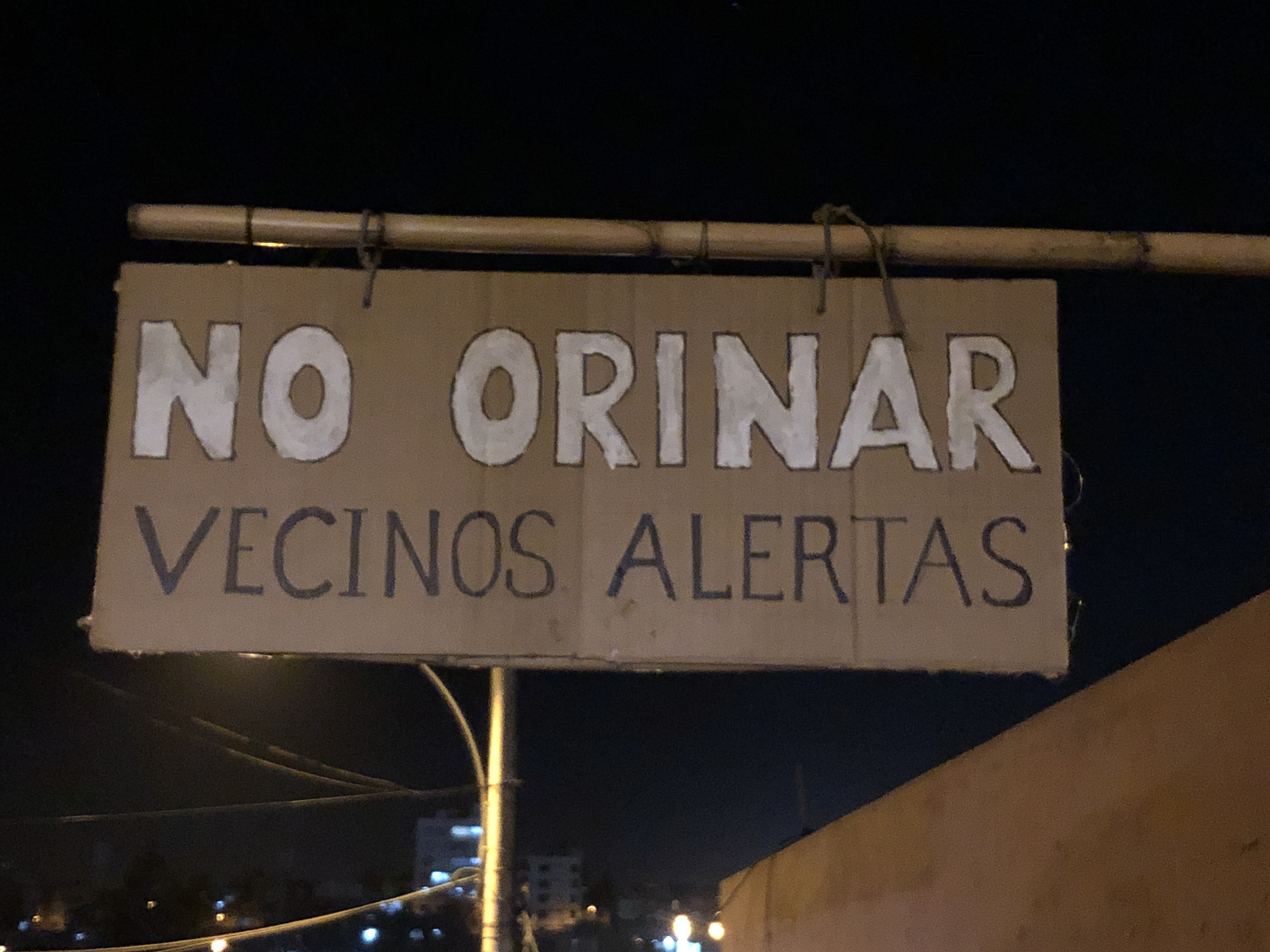 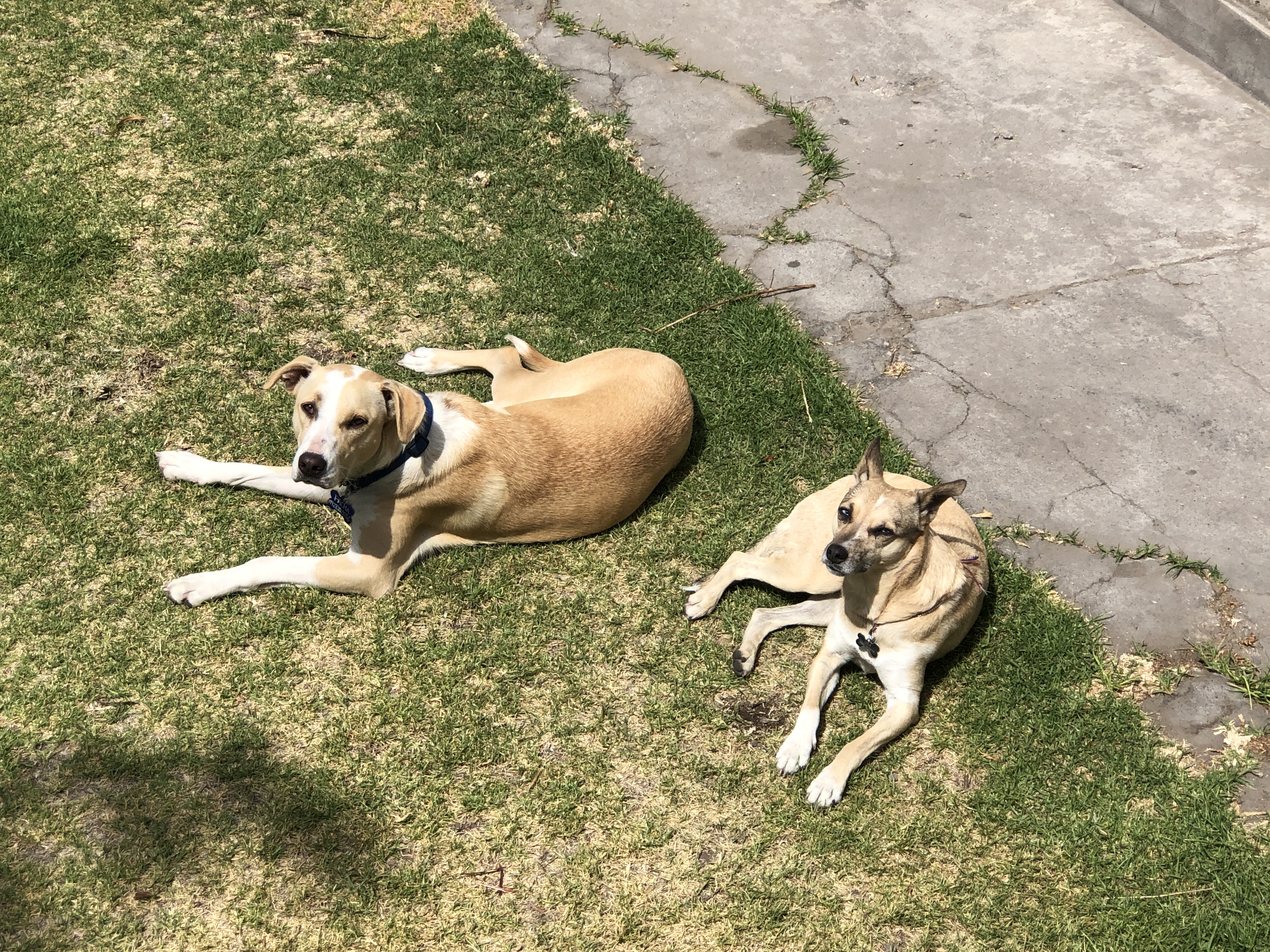 The dogs enjoyed relaxing in camp.  But they know it is time to go.  There is so much more of Peru to share with you.   Are you ready?