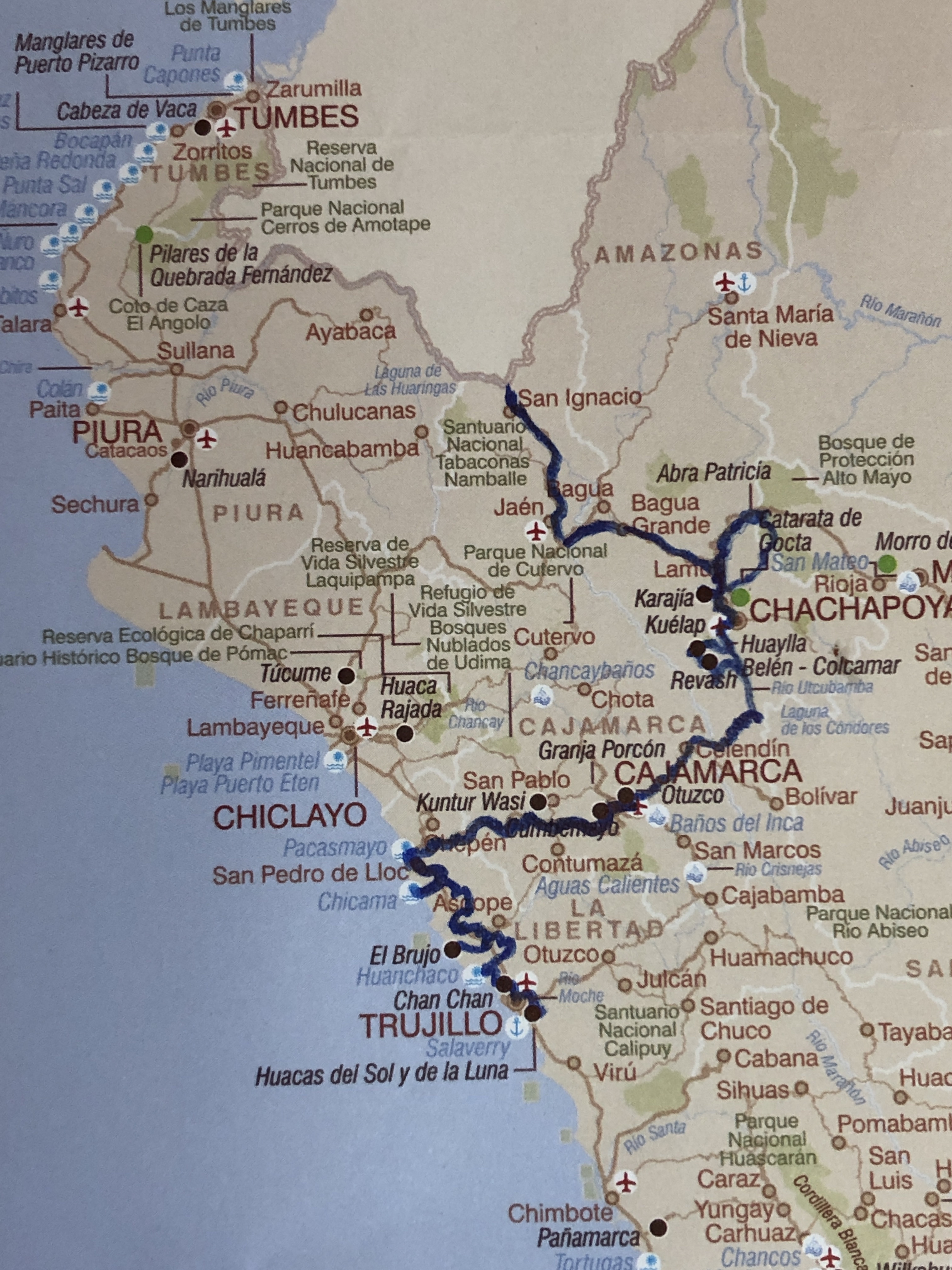 Our first stop was a small beach town with a split personality.  Punta Malabriga is a working town with a fish food factory.  The bay contains many fishing boats which catch sardines and anchovies to be dried for fish food.  The factory works constantly, and produces a steady smell of FISH.

But the other end of town is called Puerto Chicama. It is considered a surfers paradise with fantastic waves.  There is even a surfing museum under development in town.  Geneva posed with the statue of the surfer girl out front! 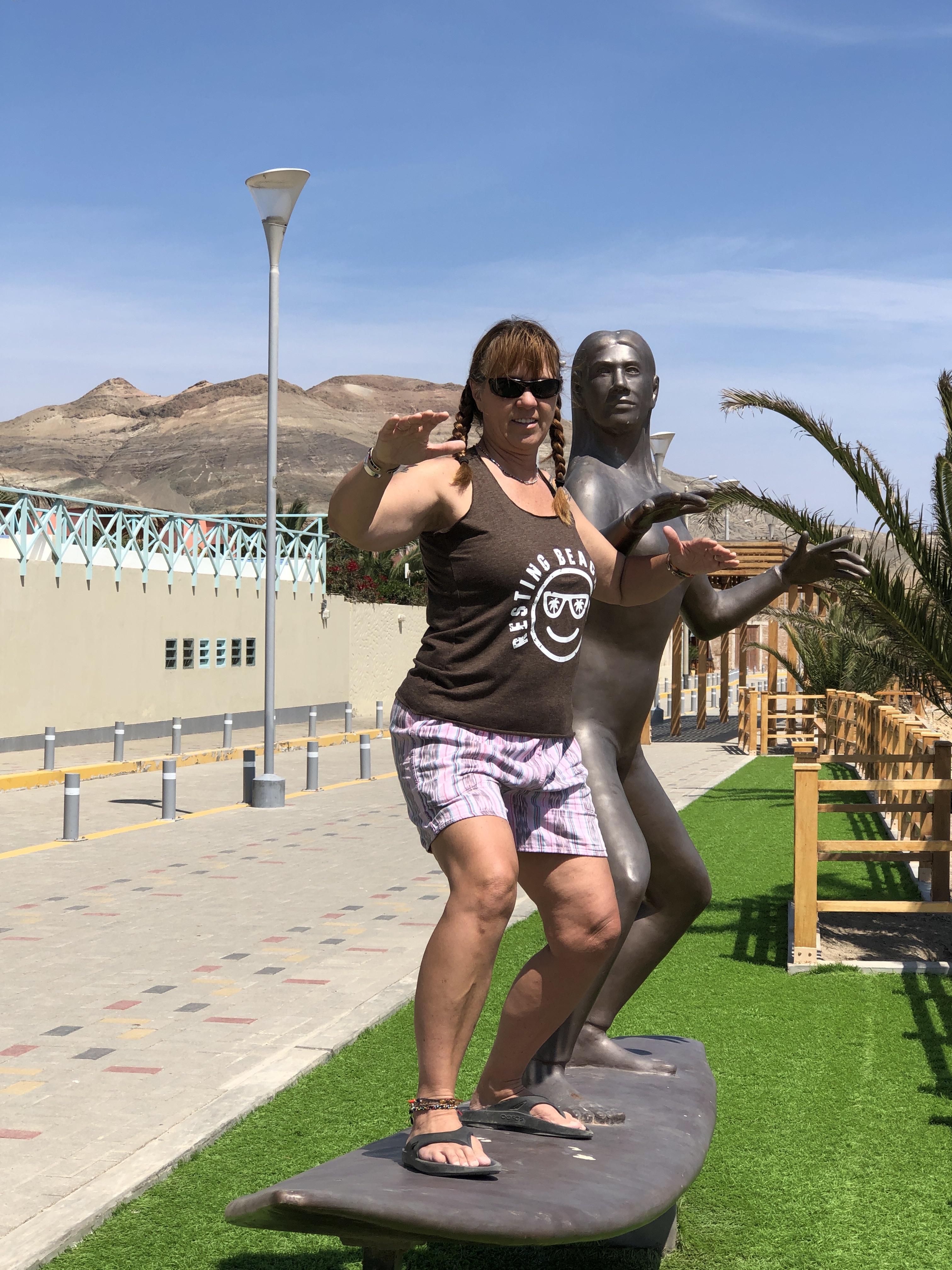 We found a beautiful, cliff top campsite.  From this location we felt the breeze coming off the ocean, and the wind blowing across the desert behind us. 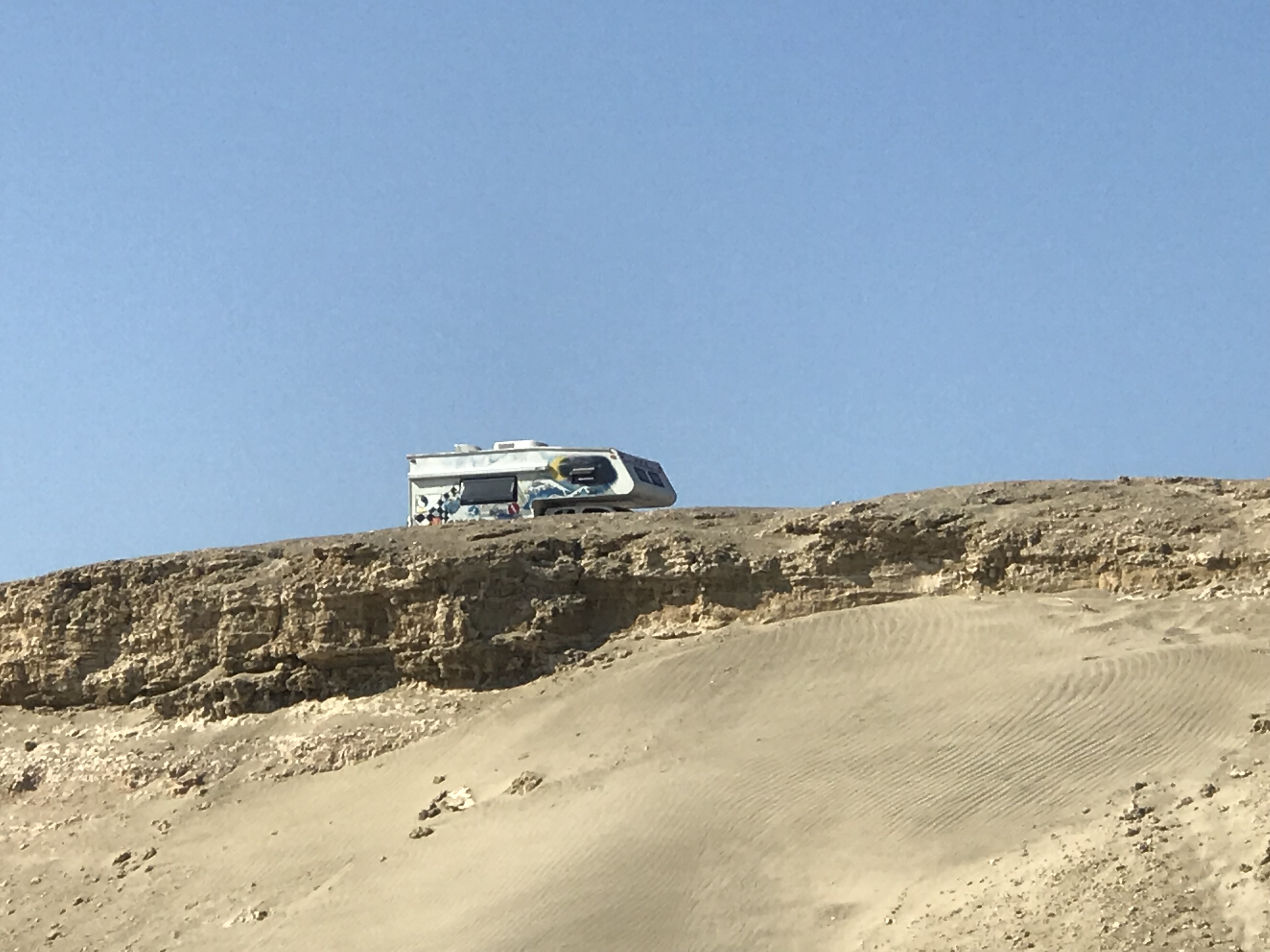 We took long walks with Nica.  And we relaxed and enjoyed slow coffee overlooking the ocean. 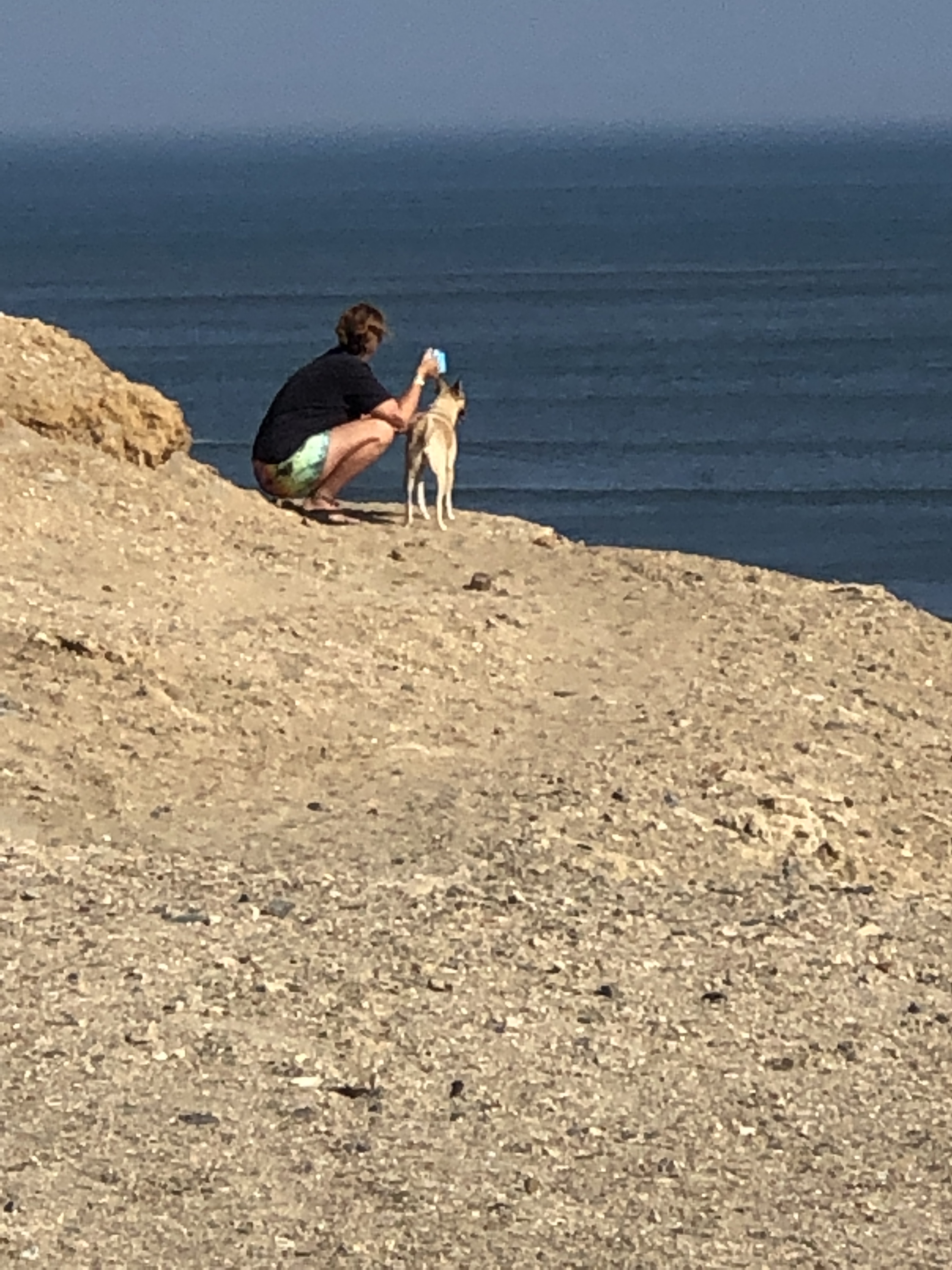 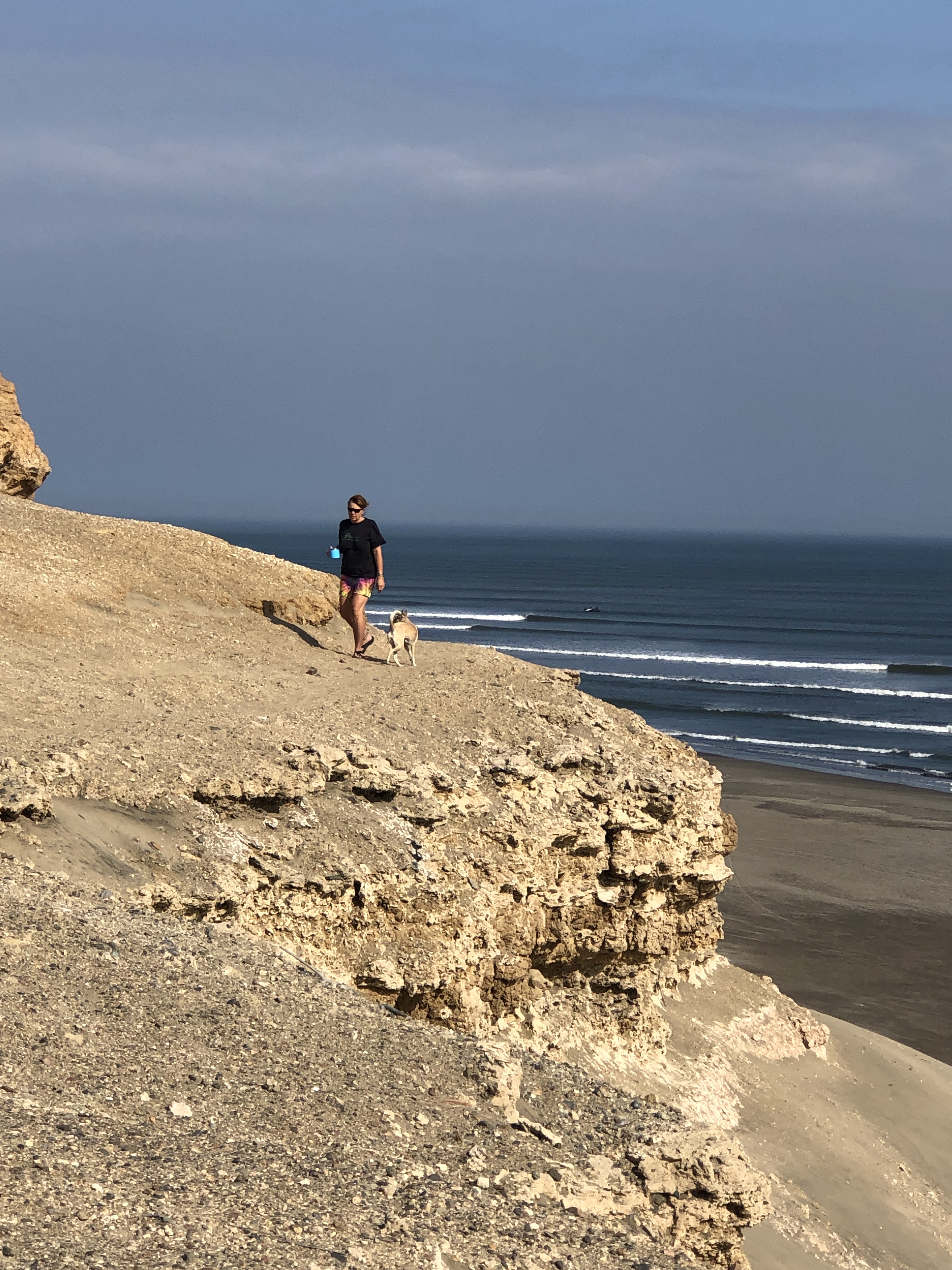 And from this vantage point, the sunsets were amazing!

It was not surfing season when we passed through.  But the vibe of daisies and hanging loose was still present on the life guard shack.  In town we found a small shack serving delicious, homemade burgers and fresh, chocolaty banana topped brownies.  Puerto Chicama was an enjoyable place to relax for a few days. 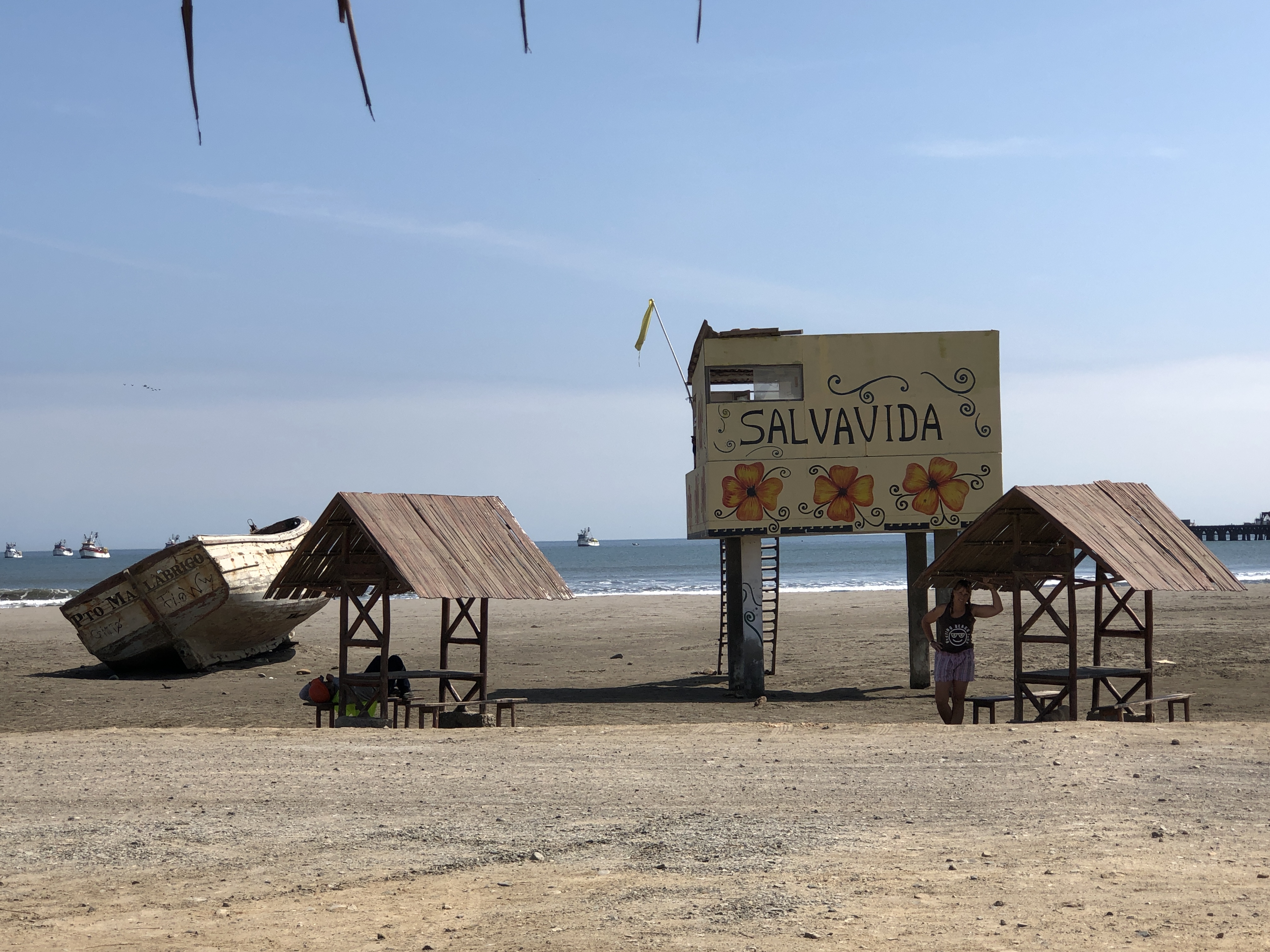 Continuing our beach time, we moved southward to Huanchaco to park for a few nights.  This small town is located just outside the big city of Trujillo.  There are many interesting ruins to see in this region.  And the oceanfront parking was nice, also.

The first ruins we visited were the El Brujo Complex.  This stepped pyramid and surrounding structures were built by the Moche culture between approximately 100BC and 650AD.  (This means that these cultures were there LONG before the Inca’s. We discussed this a little in our previous post.)  It is named El Brujo, which means wizard or shaman, because many indigenous people use this structure and others in the region for medicinal practices even today.  The walls feature amazing relief-work and murals , much of which is still painted in bright colors.  The first wall here shows a long row of naked prisoners being led by a decorated warrior.

Other walls have designs that may represent the ocean tides, the movement of the moon and even regional animals.

Inside the pyramid structure are walls with designs that are believed to relate to battle, strength, religious worship and hallucinogenic visions. 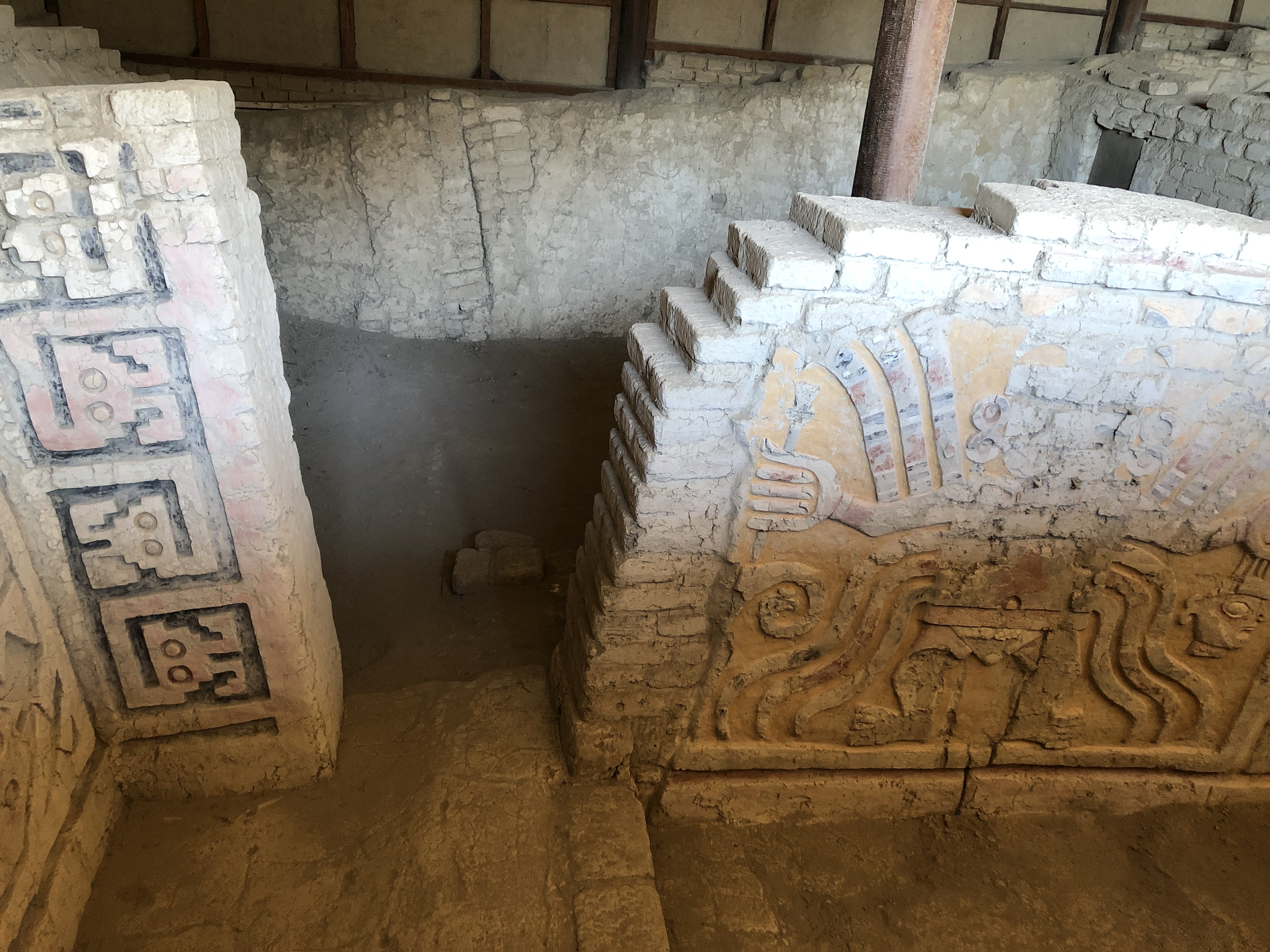 We were very impressed at the preservation of this archeological complex and accompanying museum.  It certainly made us look forward to further exploration! Here is a brief video of the pyramid.

We didn’t have to go far to find more ruins.  The largest Pre-Colombian city in South America is nearby.  It is impossible to drive into the modern city of Trujillo without seeing a portion of the Chan Chan ruins.  The entire complex spans about 12 miles and many of the mounds, walls and structures are clearly visible from the main road.  Much of the city is now buried under sand.  This model shows the many walled sub-cities of the original community of Chan Chan. 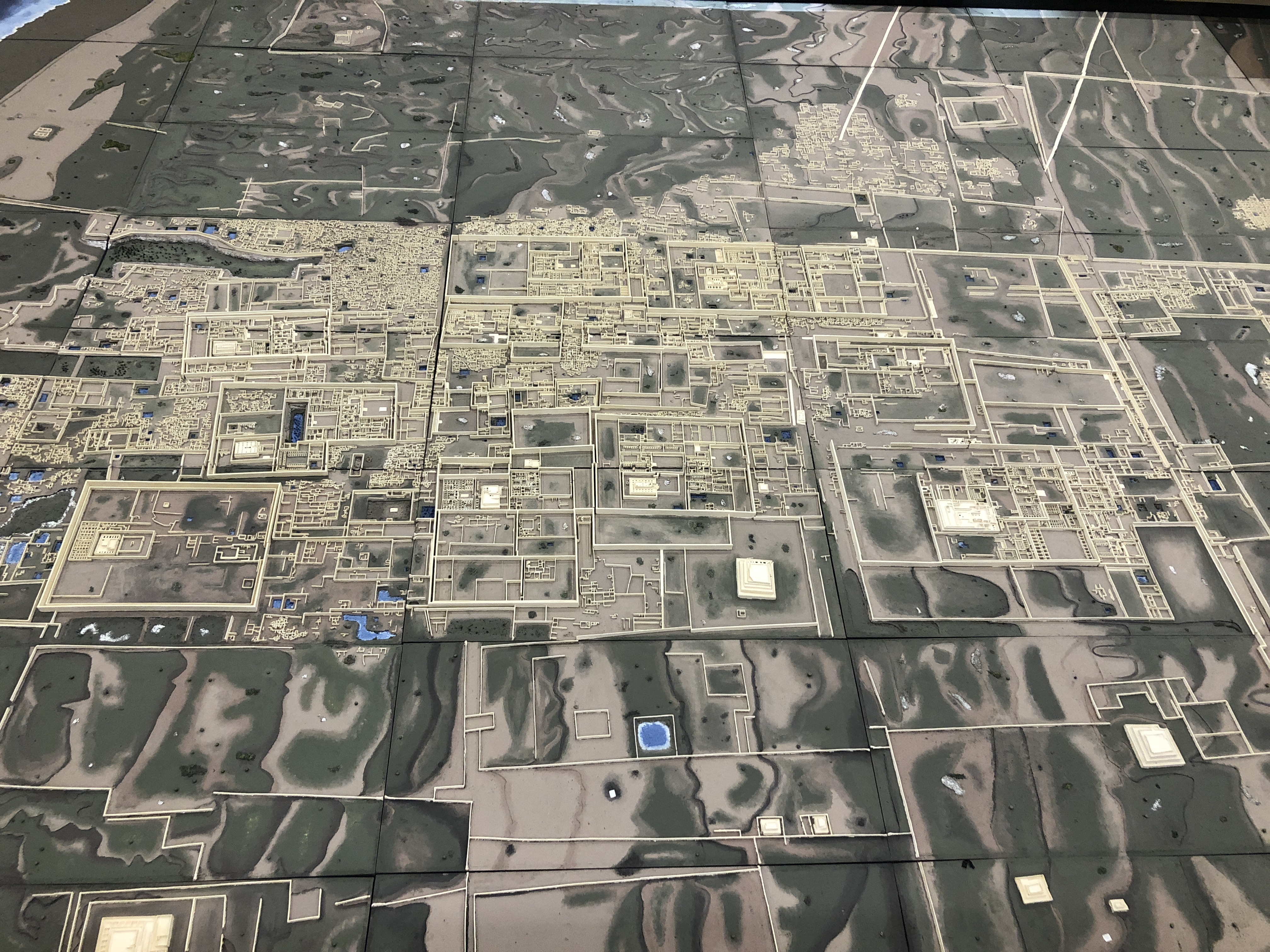 The main complex in the center of the ruins has been partially restored and rebuilt to provide visitors the impression of entering a true Chimor royalty temple.  The security walls along the outside are over 30 feet tall.  The interior walls were over 6 feet tall (they are only partially reconstructed).  They divided rooms of the temple, storage areas for food, storage areas for idols and typical household spaces.  The walls were made in an open pattern to allow light and air flow.  This is a very hot part of Peru.

After enjoying Chan Chan we went to the city of Trujillo for lunch and a visit to the toy museum.  This is a privately owned collection of old dolls, mechanical toys, model airplanes, toy soldiers and much more.  It is contained in just three rooms and feels very crowded and a little bit spooky.  Perhaps you will agree?

There is one more fantastic archeological complex in this area that we chose to explore.  The Huaca del Sol and del Luna ruins are adobe brick temples with incredible artwork and a staggering number of bricks in the construction.   The four levels of the temple contain over 130 million adobe bricks.  Each family in the region was required to donate a specific number of handmade bricks.  This display shows some of the different family “signatures” carved in to their brick contributions 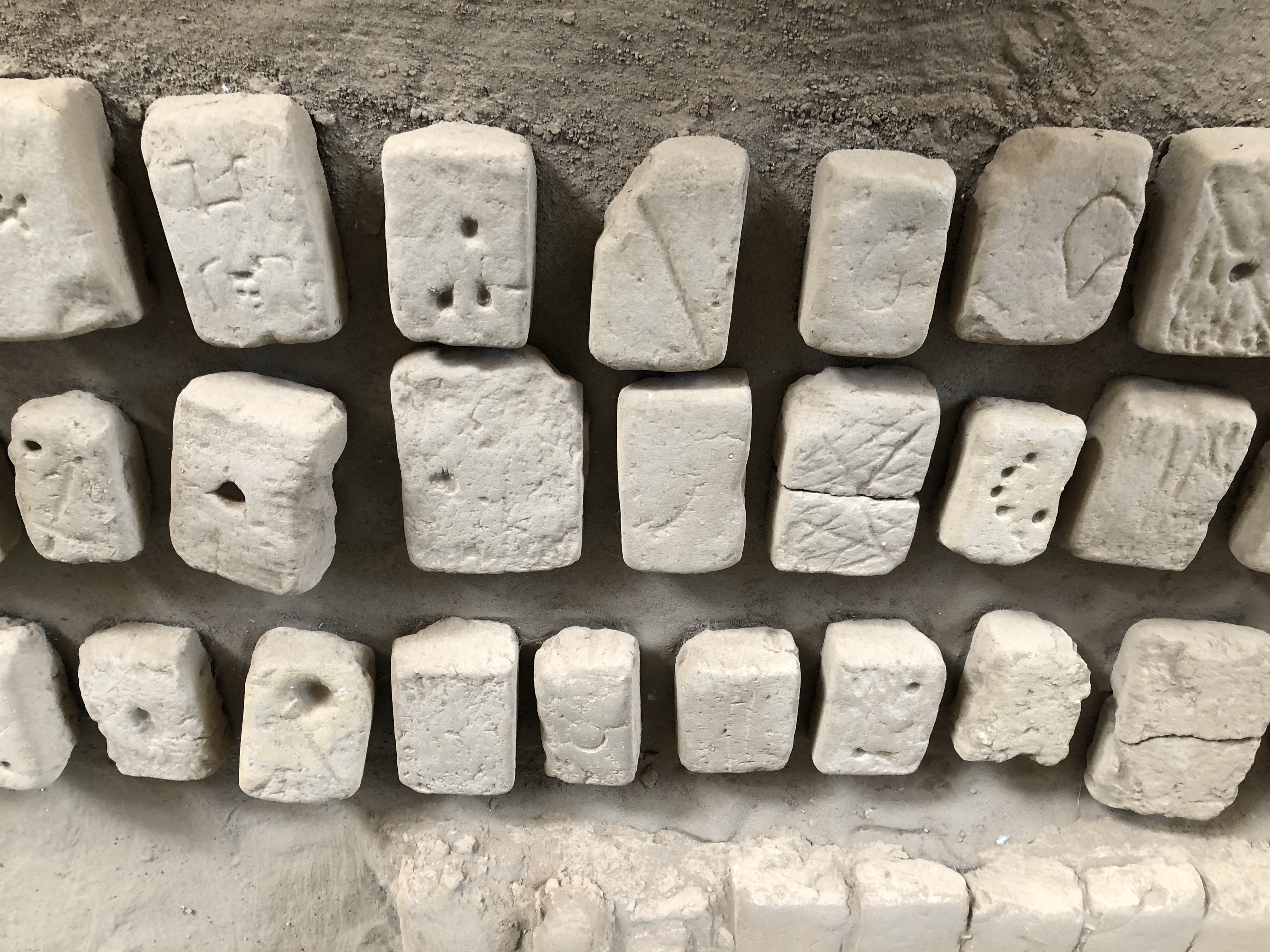 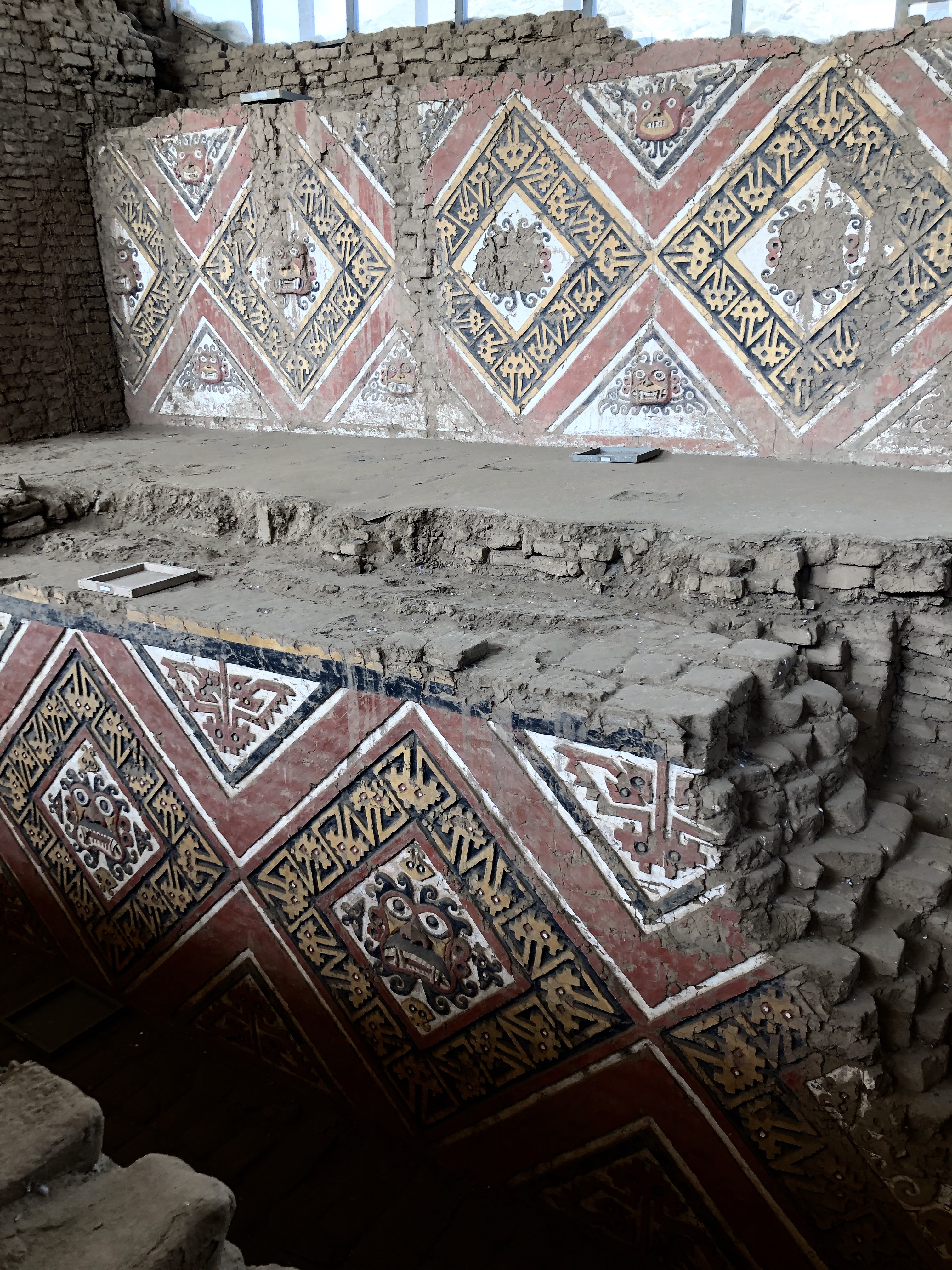 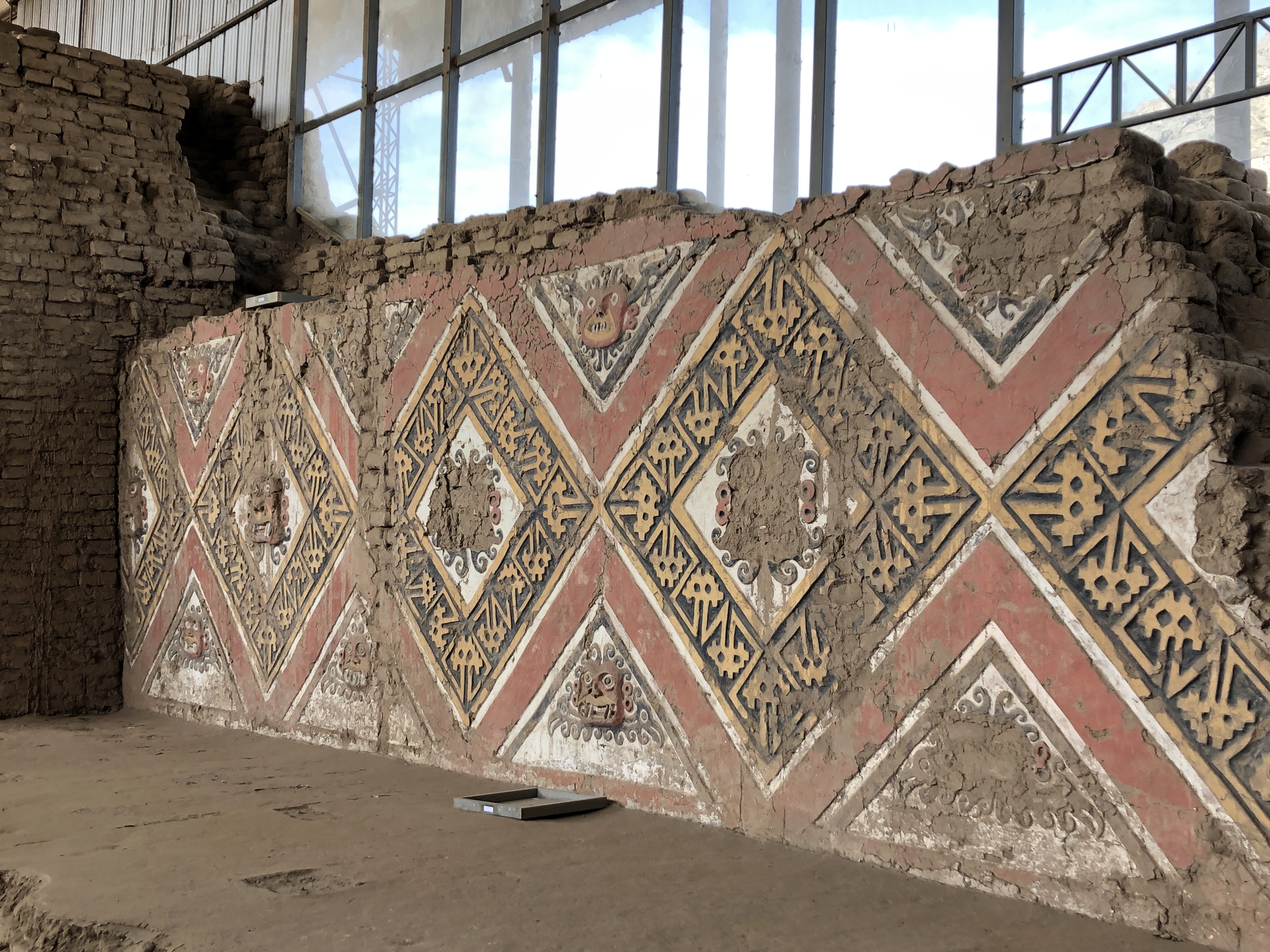 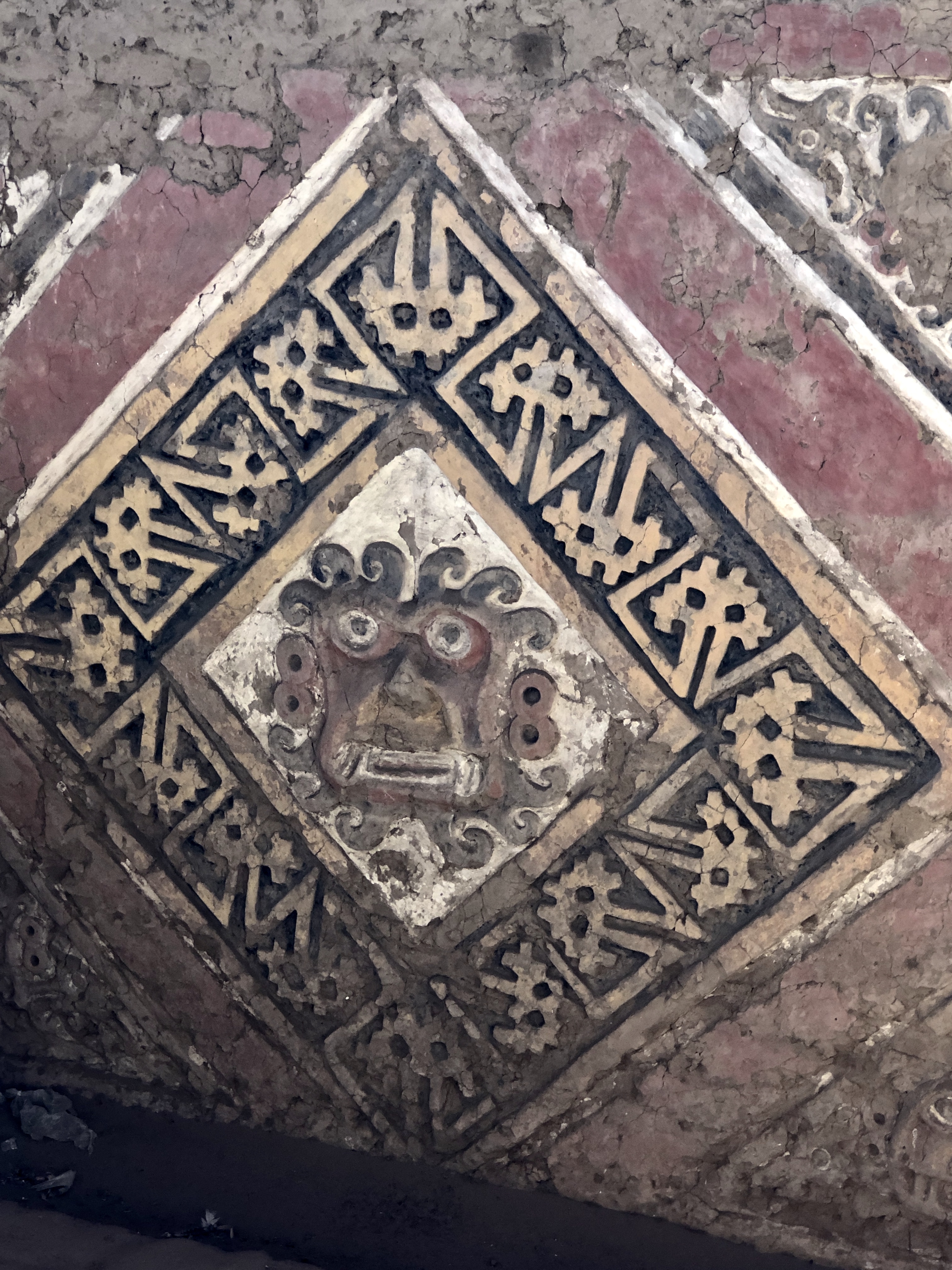 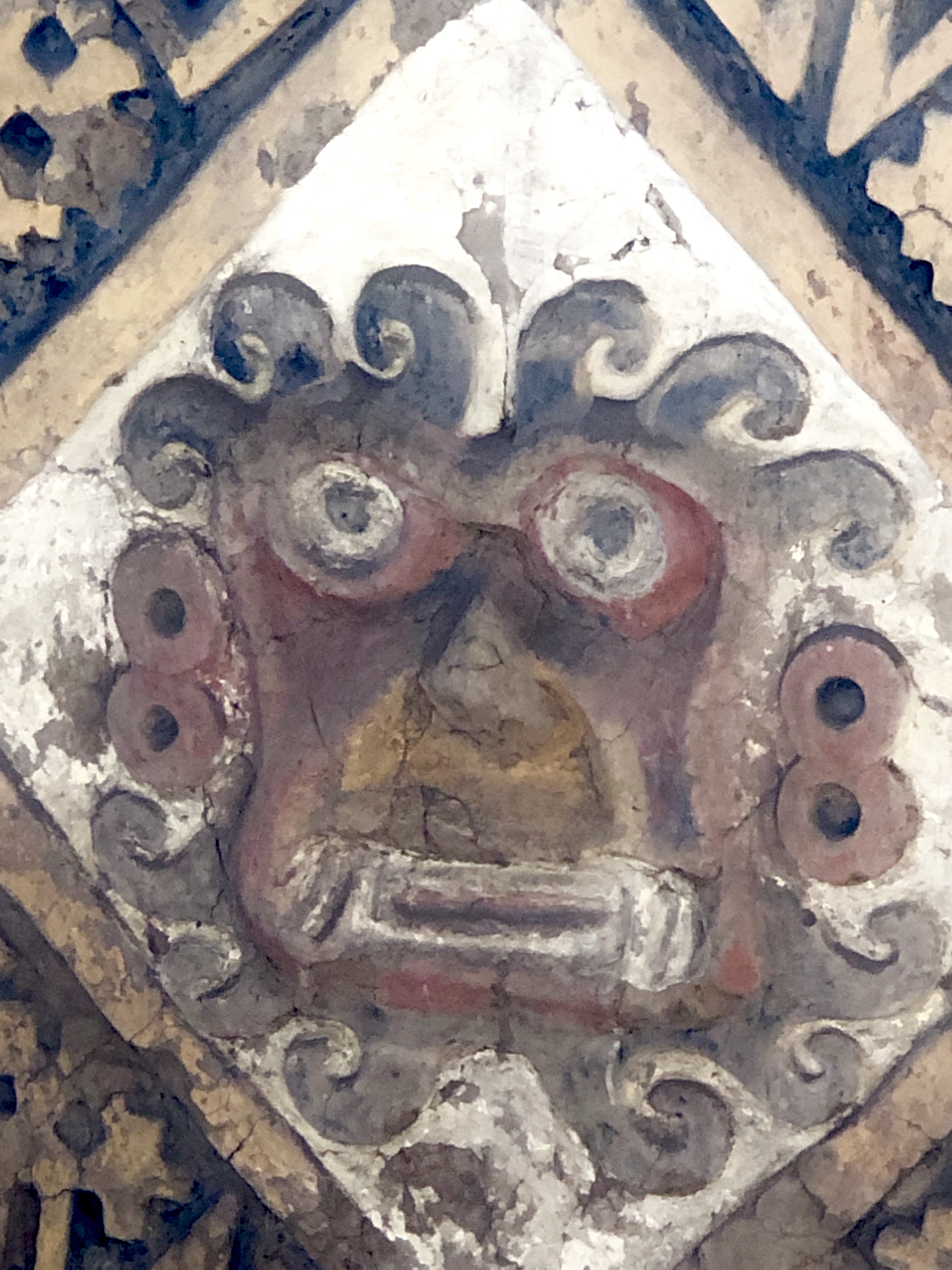 As you look at the colors in these murals, keep in mind that this temple was constructed in 100BC to 800BC by the Moche people.  It contains many layers and much of the structure has been damaged by looters.  For example, the huge chunk missing from this giant wall, was torn by a tractor bucket.  This caused a huge collapse in the structure. 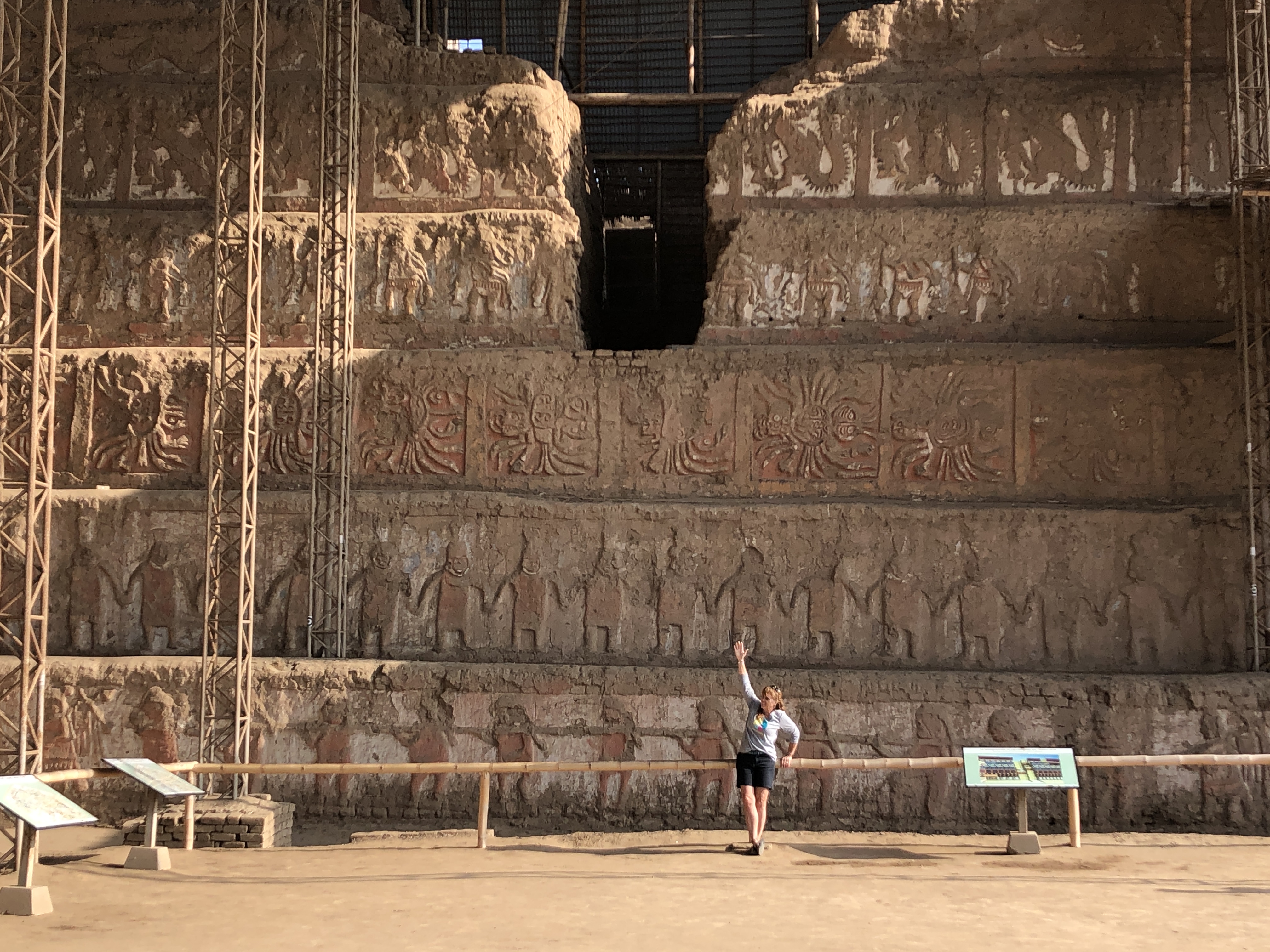 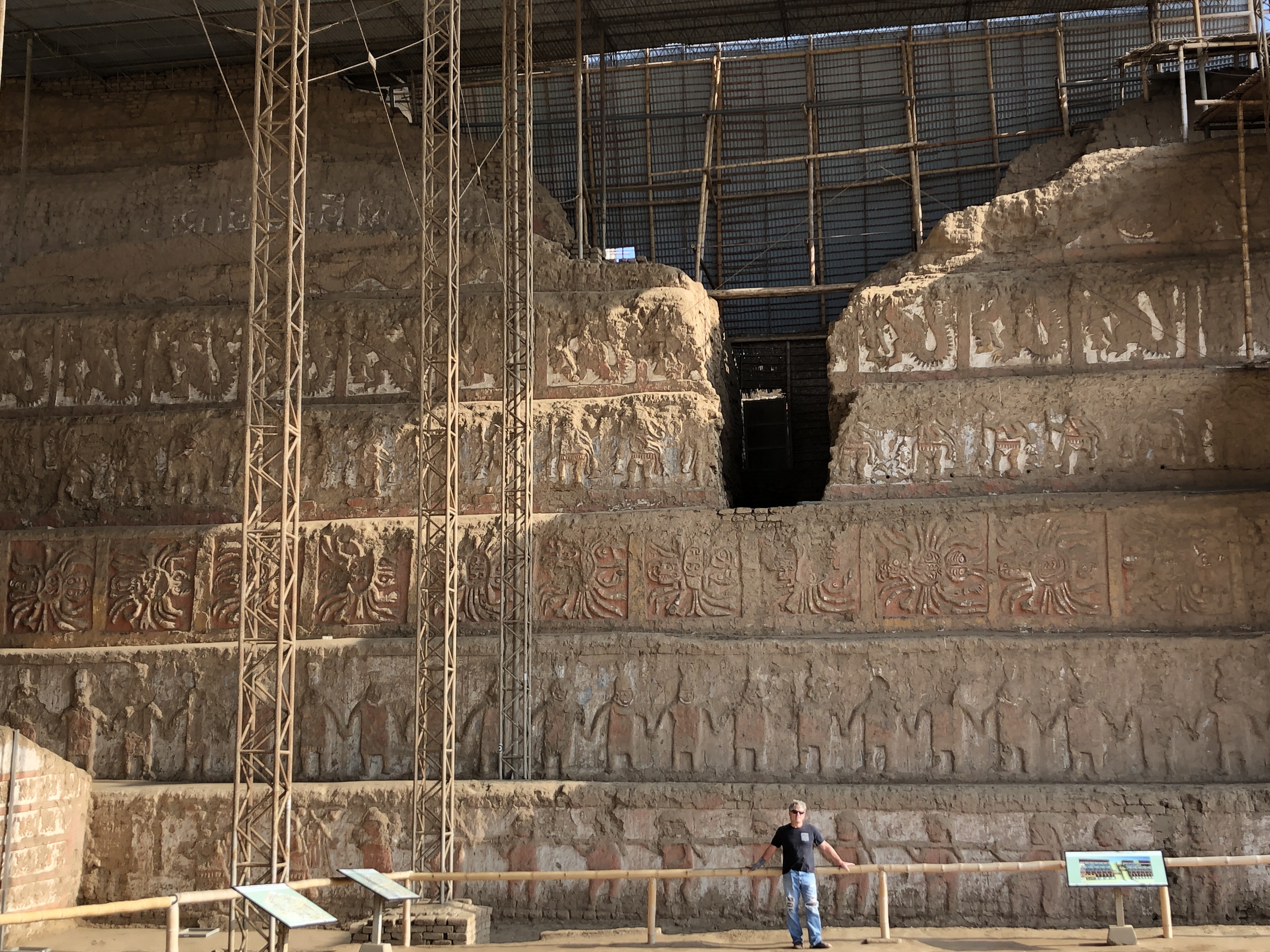 Once the walls began to collapse, the inner portions of the temple were revealed.  Here they found many mummified burials and idols of worship. 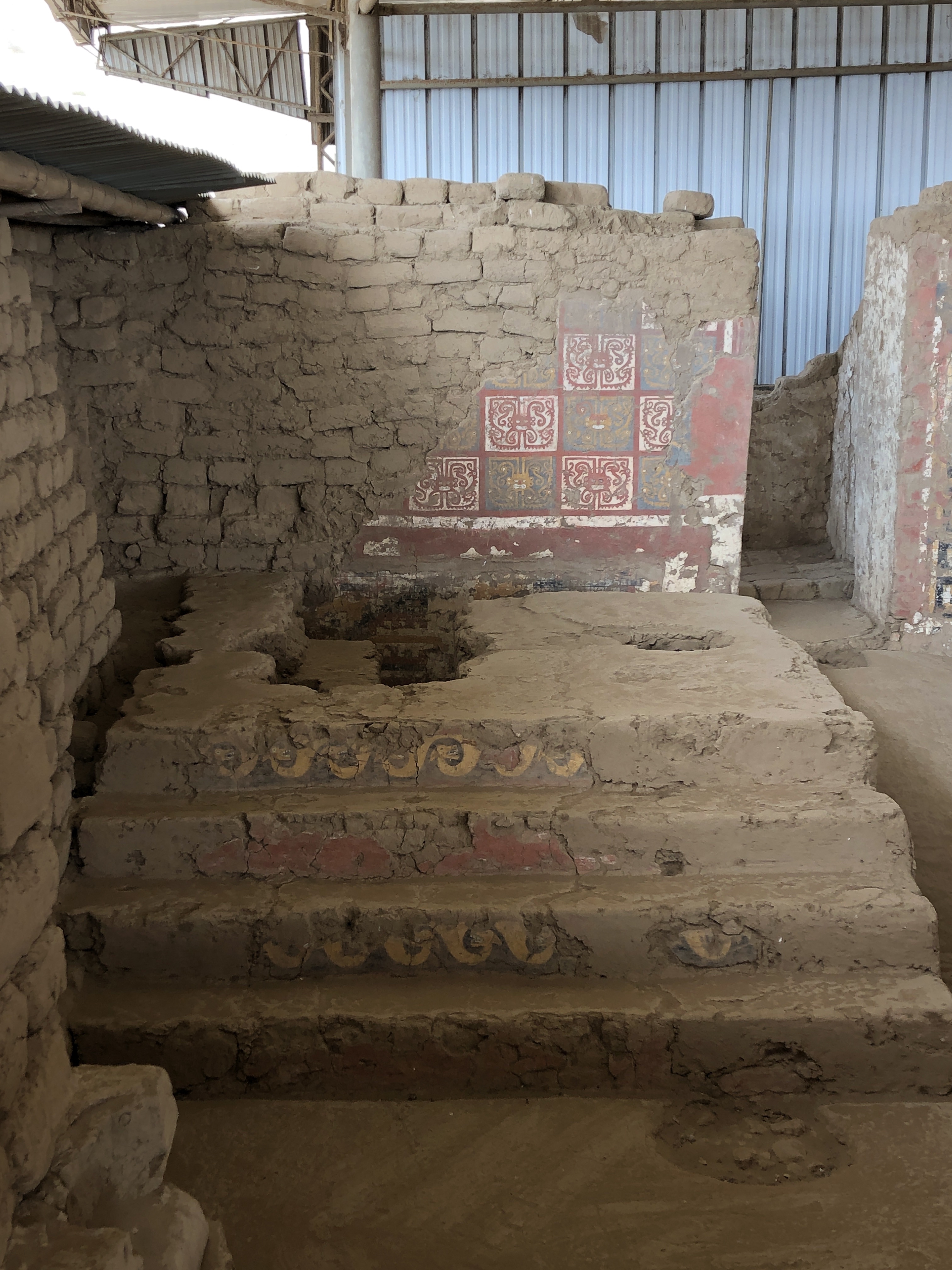 One of the most detailed and incredible murals is marked by a meter stick.  The colors are much more vivid in person and in better light.  But once your eyes see the meter stick, you can begin to comprehend the sheer size of this temple and the decorations inside. 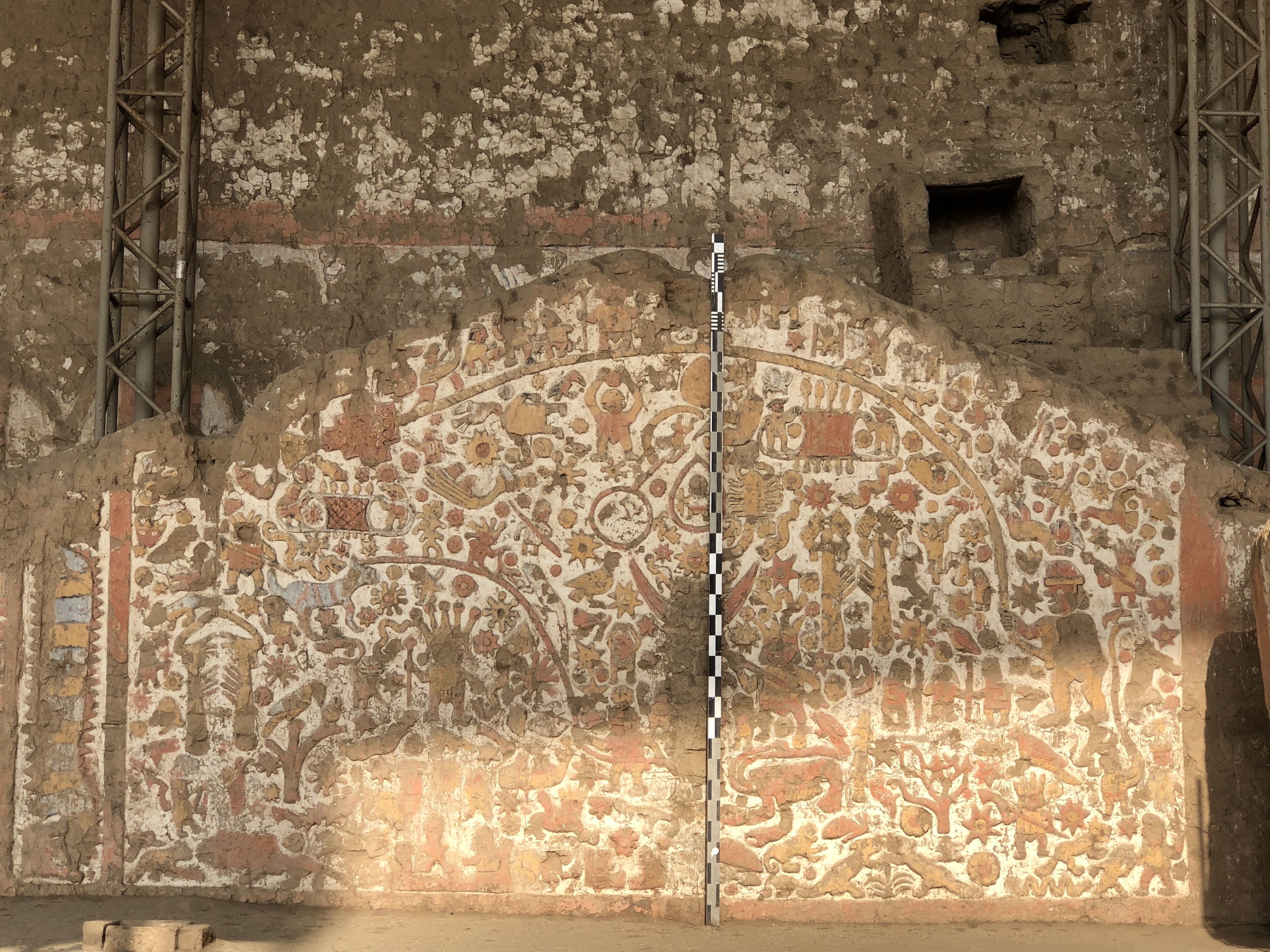 Completely awed and deep in thought from exploring these ancient structures, we were ready for something new.  We drove along the PanAmerican Highway, with the ocean on our right side, and huge mountains of sand on our left.  Our target for the night was a modern ruin of sorts.  A former gravel operation would be our campsite.

We took this opportunity to make a silly little video of our truck driving down one of the dirt access roads.  As you watch the video, notice the huge, desolate mountains of sand.  This is the scenery for much of coastal Peru.  You can also see a semi-truck driving along the PanAmerican Highway in the background.  But turn down the volume or you will be assaulted by the constant wind blowing, and Nica barking at a bird.

The next stop was not in our plans.  But when you are driving along a windy, sandy highway and you see this in the distance… you have to stop to check it out, right?

So we pulled in to the small parking lot to check out the thick walled Fortress of Paramonga.  This was built in 1100AD to 1400AD and was also used by the Inca in the 1500’sAD.  This probably was not a fort, but another temple for the people of this area.  It was reportedly a fantastic structure filled with art and treasures.  For comparison, here is a drawing of the temple made in 1880AD by Spanish explorers.

The current condition reflects centuries of looters, wind, rain and a lack of preservation.  But with the sheer number of ruins in this country, it is understandable that some will be ignored.  This one was, but we enjoyed the exploration of what remains.

Sechin Bajo would be our next set of ruins along this section of the coastal road.  This is one of the oldest ruins on the continent, at 3500BC to 1300BC.  This set of buildings and temples covers over 90 acres of land.  However, much of it is damaged and inaccessible.  We were able to observe some of the frieze artwork on the outside of the main temple.  The art on these structures are known to depict violent scenes, including decapitations, removal of limbs and bodies cut in half.  See how many parts you can find in the photos below. 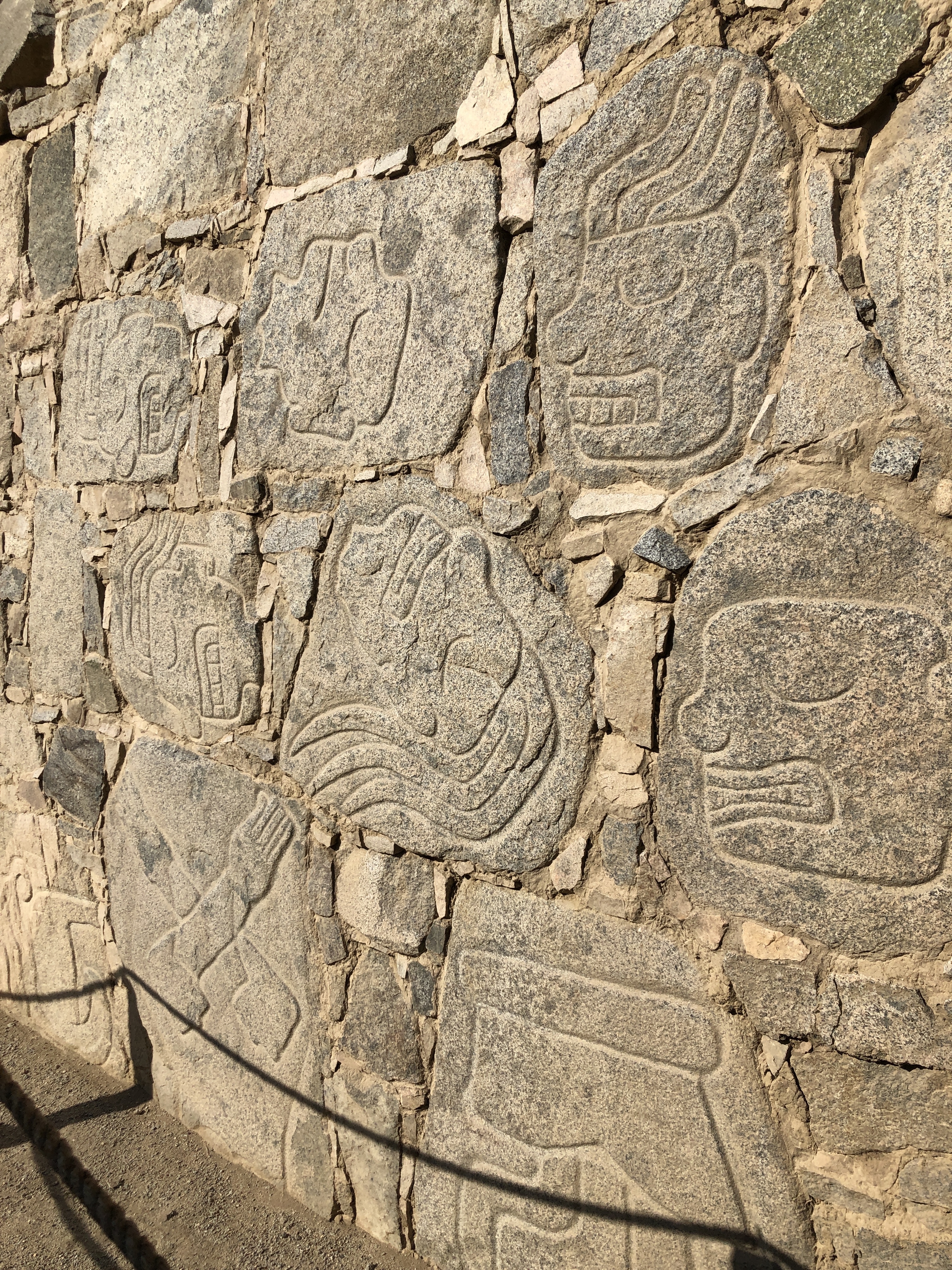 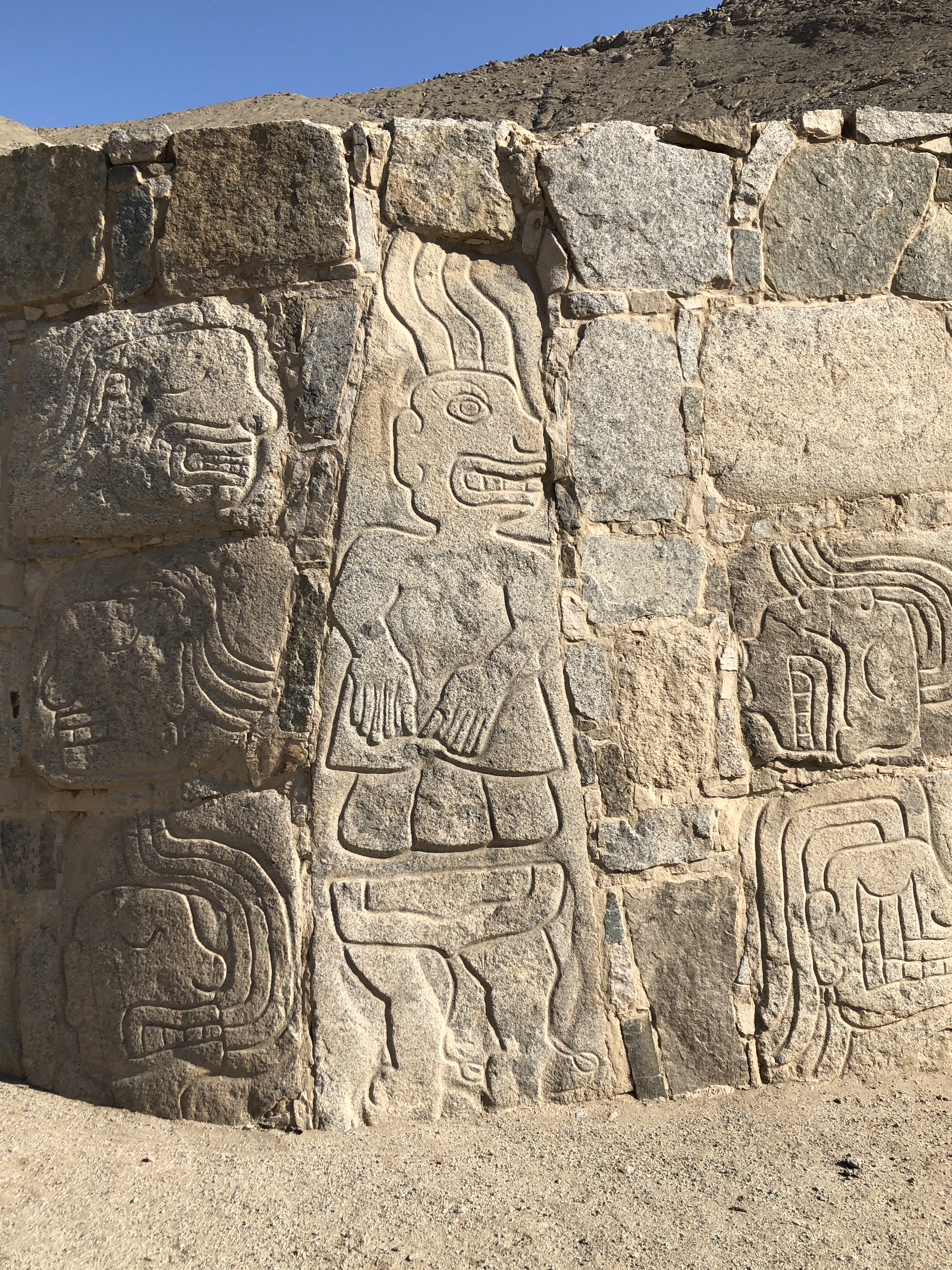 The final ruin along this route would be Caral.  This is one of the largest and most unrestored ruins that we saw.  However, it is also the oldest ruins of the oldest civilization of South America.  This means that it was originally constructed with rough methods of dry stacking rocks and has very little ornamentation or art.   They did not use metal and did not even have baked or fired ceramics.  They made a few mud idols but few survived time.  And for this reason it was not of interest to looters or archeologists until recently. The people of Caral were apparently studious of astronomy, religion and music based on the few artifacts that have been found on the site.  You can see some great photos and learn more about Caral at this link.  (click here to open a new browser window)  We left our camera in the truck when we arrived.  Sorry. 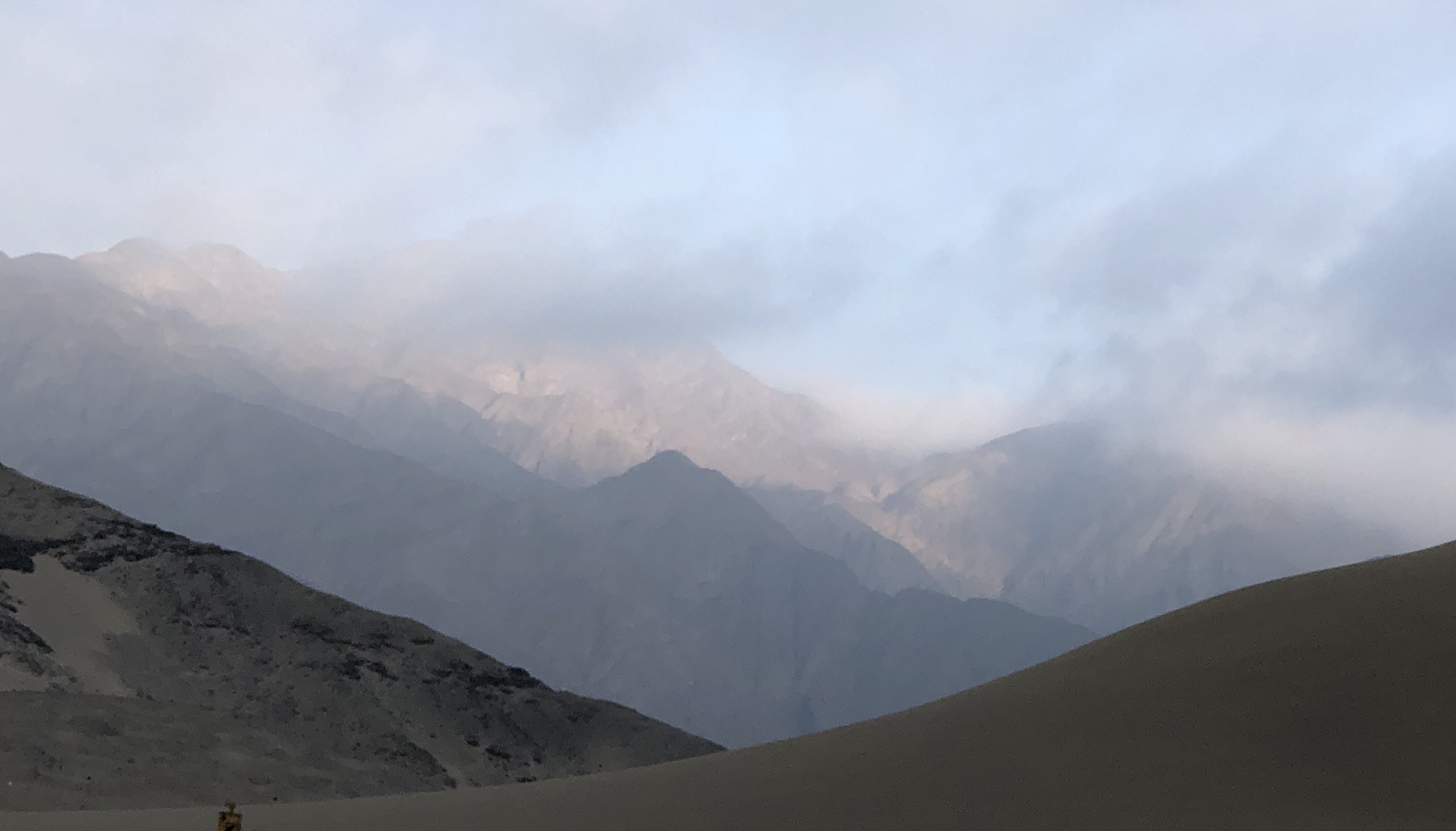 We camped in a nearby riverbed and looked up into the valleys nearby.  The location of Caral makes it apparent that it was a major trade route and a fertile valley to support a large ancient culture.  So much of what we have learned and read is starting to come together for us in fascinating ways.  Peru is amazing! 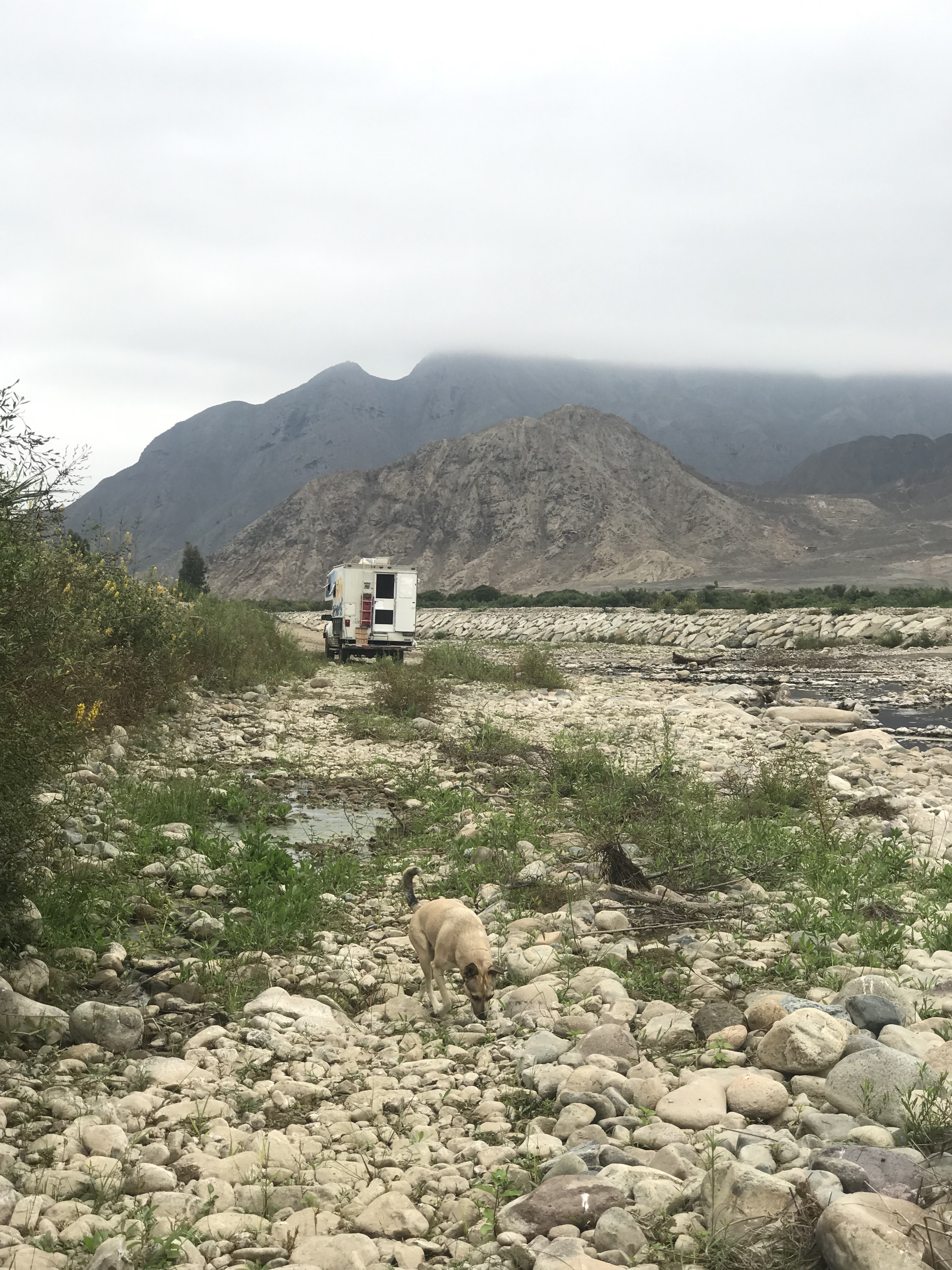