This is a special fathers day blog release.  Hoping that some special men we know back in the USA are wearing their Panama hat for fathers day!

First you are asking yourself, “Why is she writing about Panama hats now? They left Panama back in July.”

And I would have to clarify the answer with a brief story! You see, the Panama hat is not made in Panama. It is not even shipped from Panama. The Panama hat was originally made in a small village named Montecristo in Ecuador. These hats were known to be comfortable, sturdy and easy to wear. They offer breathability in the humidity, while keeping the face and head protected from the sun. They can be folded, crushed up and stuffed in a backpack, yet they return to their original shape.

And so……. there was this MAJOR construction project going on nearby. (hint, this will open a new window on your device) And the workers needed headwear that would offer the features I mentioned above. They tried many other hats, but the thing we now know as a Panama hat was the best, by far. So hundreds of them were produced in Montecristo and shipped to the workers on the Panama Canal.

So why did the name change, you ask? It happened with one visiting American who sported the iconic, white hat and was featured in papers around the world. One little photo of President Teddy Roosevelt changed the name and the desire for the product exploded. 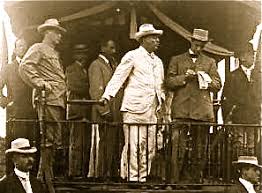 Suddenly thousands of the iconic Panama hats were ordered around the world. The little village of Montecristo couldn’t keep up with the demand.

Some of the Panama hat production was moved from Montecristo to Cuenca (a larger city) to accommodate the need for more workers and easier shipping.   The Panama hat industry moved from a few crafted artisans in a small shop, to a booming economic boost for Ecuador. 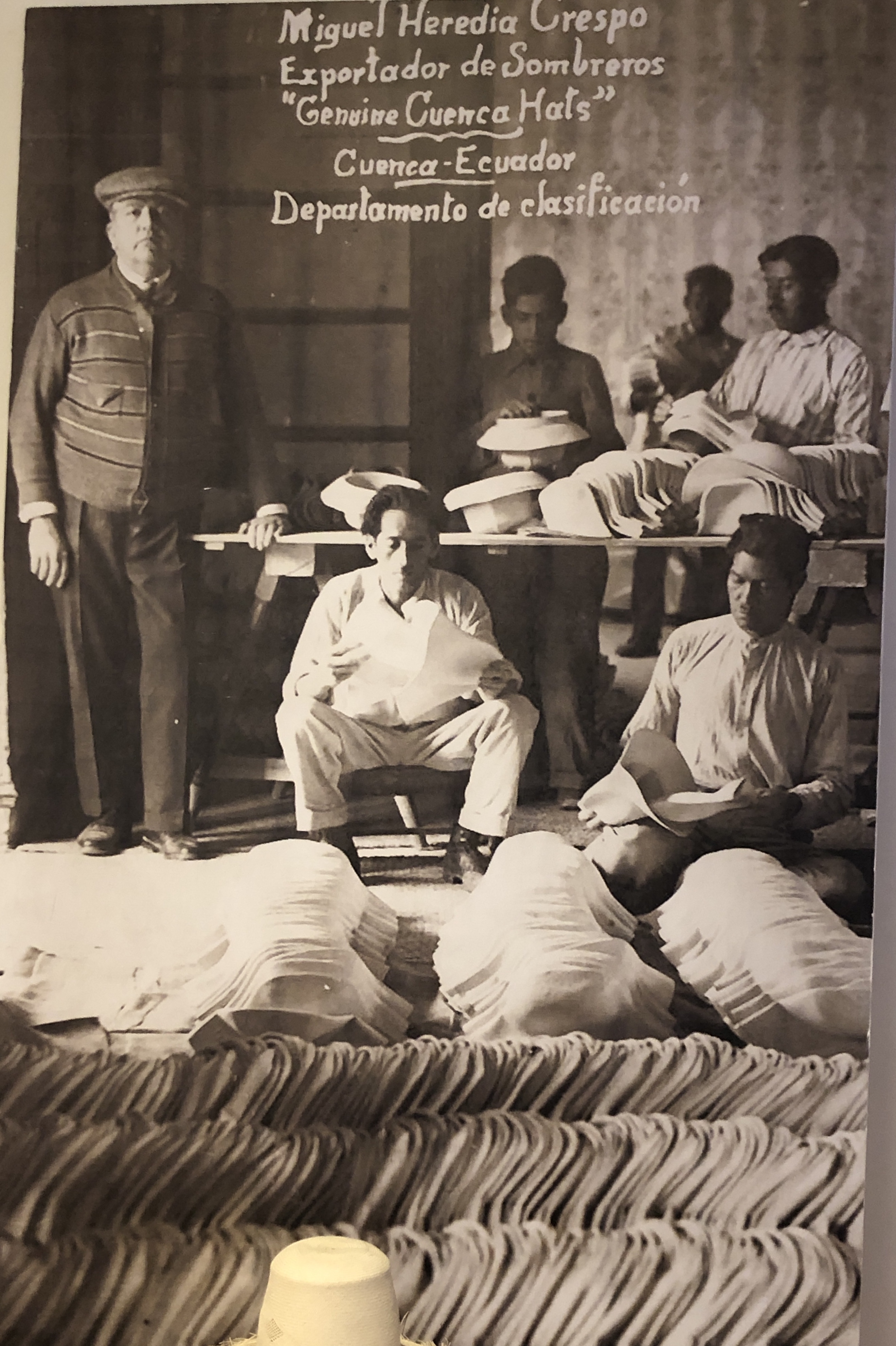 Each hat is made by weaving a specific number of dried reeds, called toquillo straw. The reeds are woven in a specific way to form the basic shape and pattern of the design. Cheaper hats have an open, airy weave and do not protect as well from the sun. More expensive hats have a tighter weave and retain their shape well. The most expensive hats are woven from so many fibers, in a pattern that is so tight, it feels like fabric to your fingers.  They are said to be able to hold water if filled and roll up smaller than a cigar!

We were able to buy Panama hats for some family members in the USA. These hats were produced at a small shop in the original village, Montecristo. 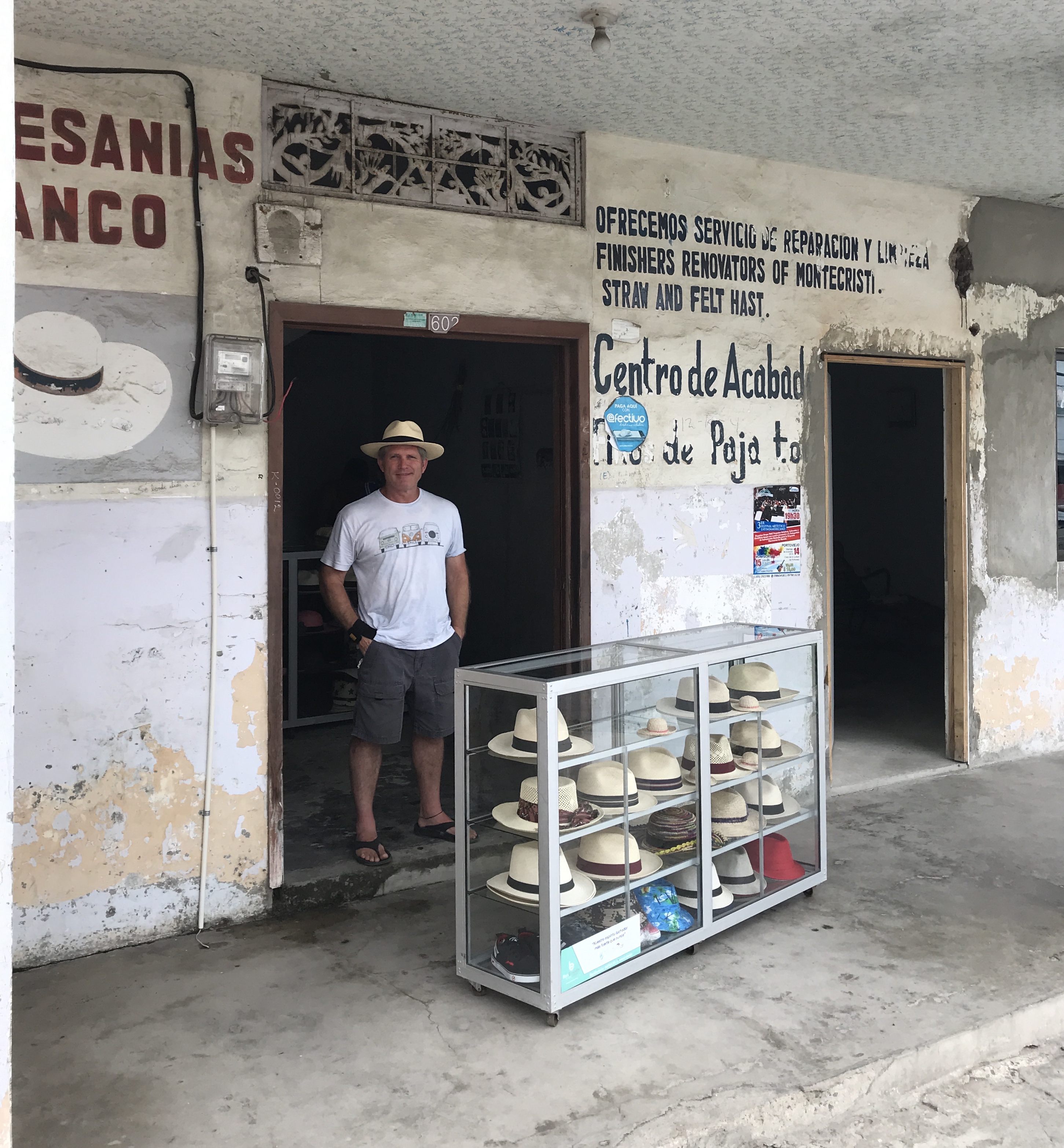 We spent over an hour there.  We met family members and we engaged in haggling over prices and selecting sizes. 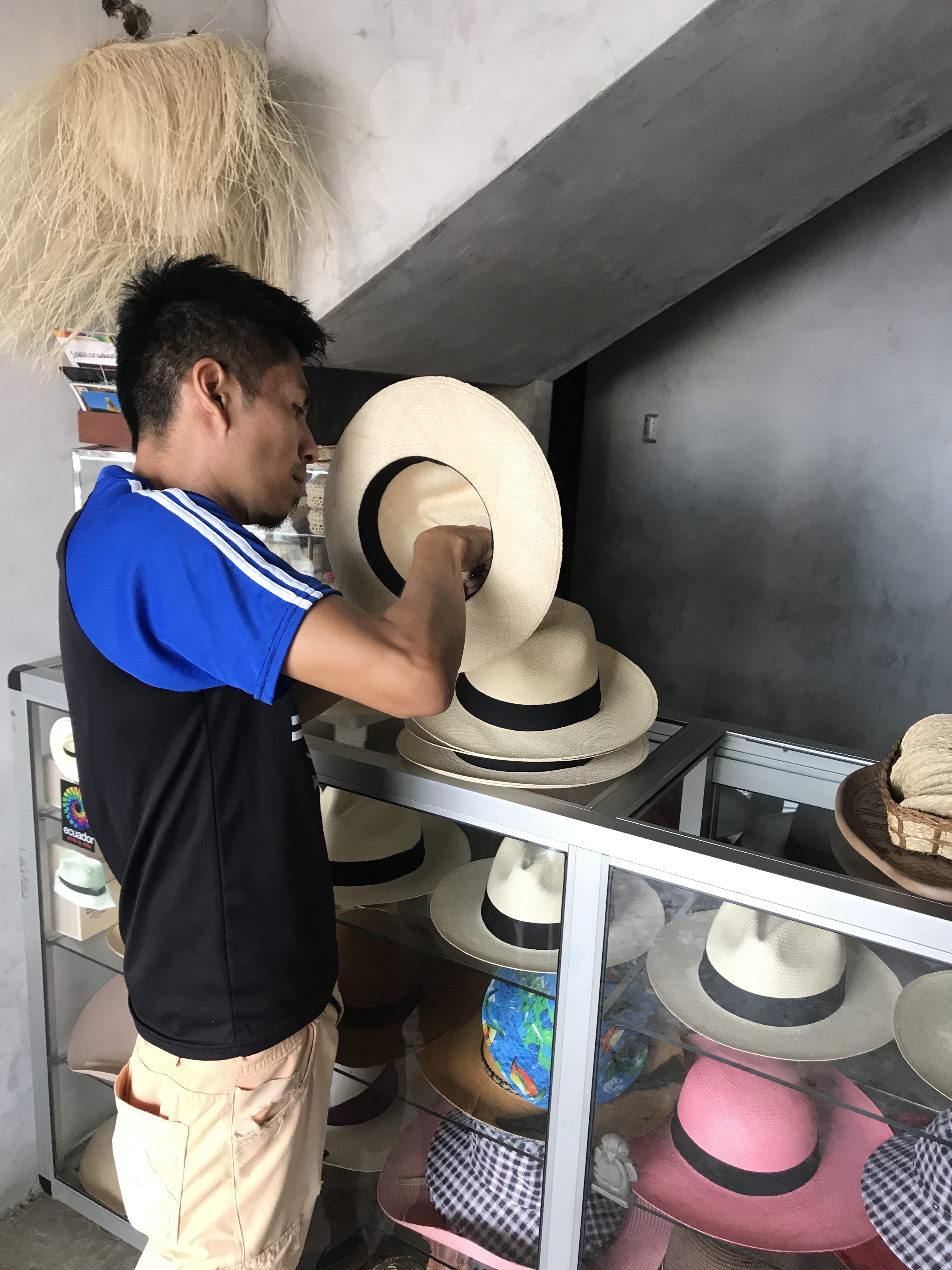 We met the son, the cousin and the grandma that had worked the original hats.   Grandpa has since passed away, most of these were his handiwork!  We watched the process of resizing a hat using hot steam, a shaper and a press.  This hat is being made larger to fit one of our family members. 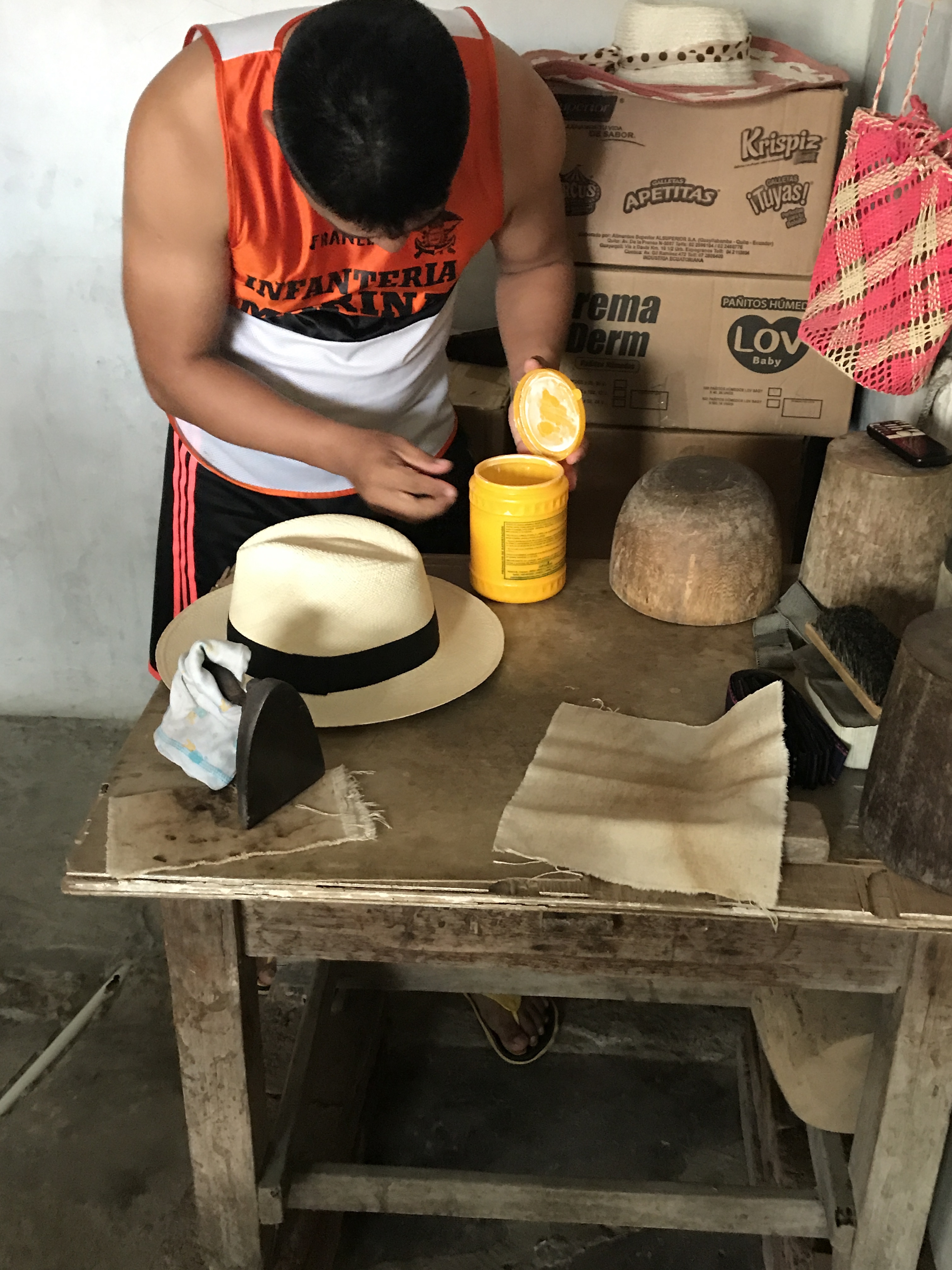 The little hat shop was thrilled for our business, and we were happy to purchase some great souvenirs.  It was fun to be a part of the history of Ecuador in this way. 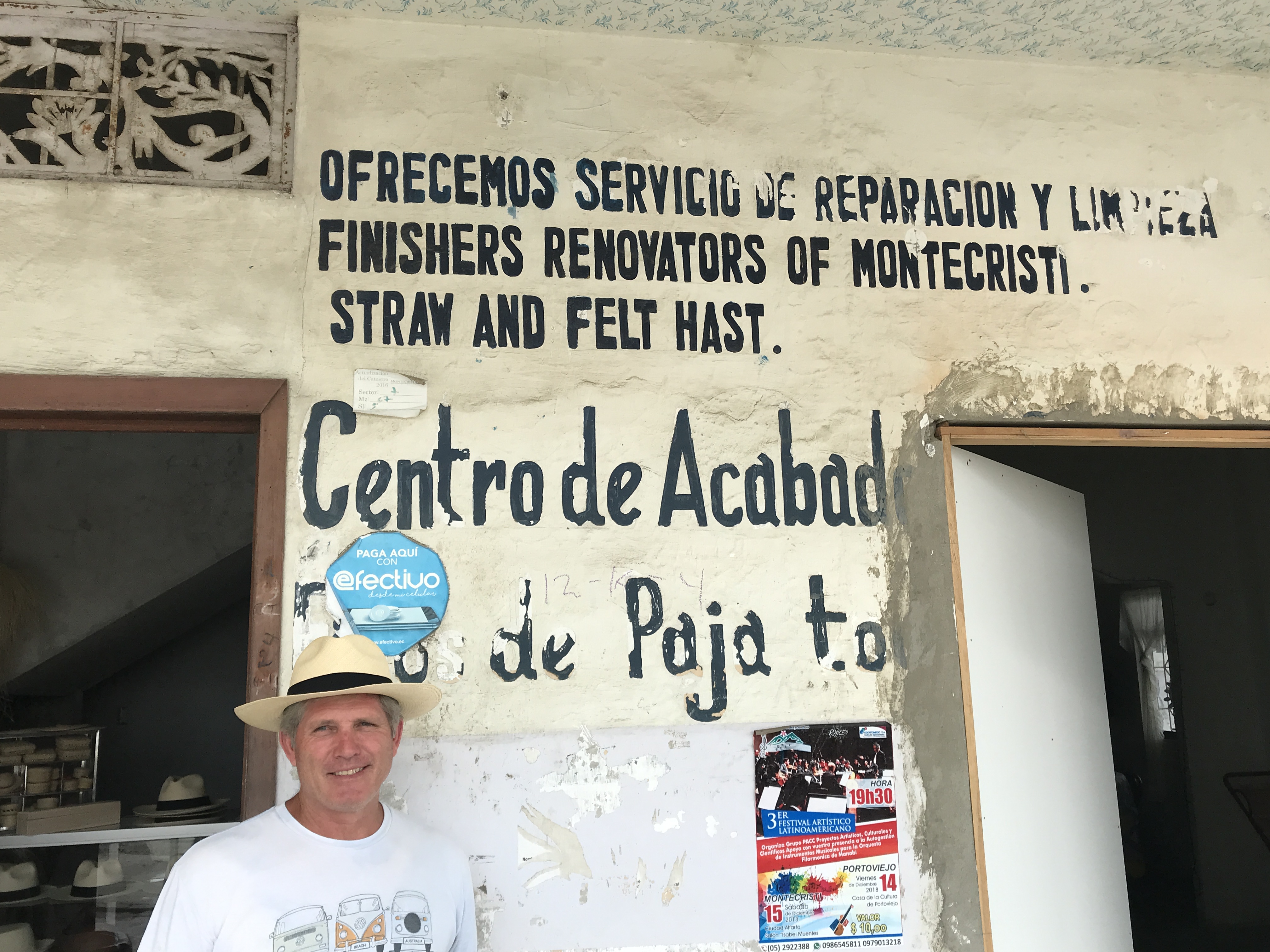 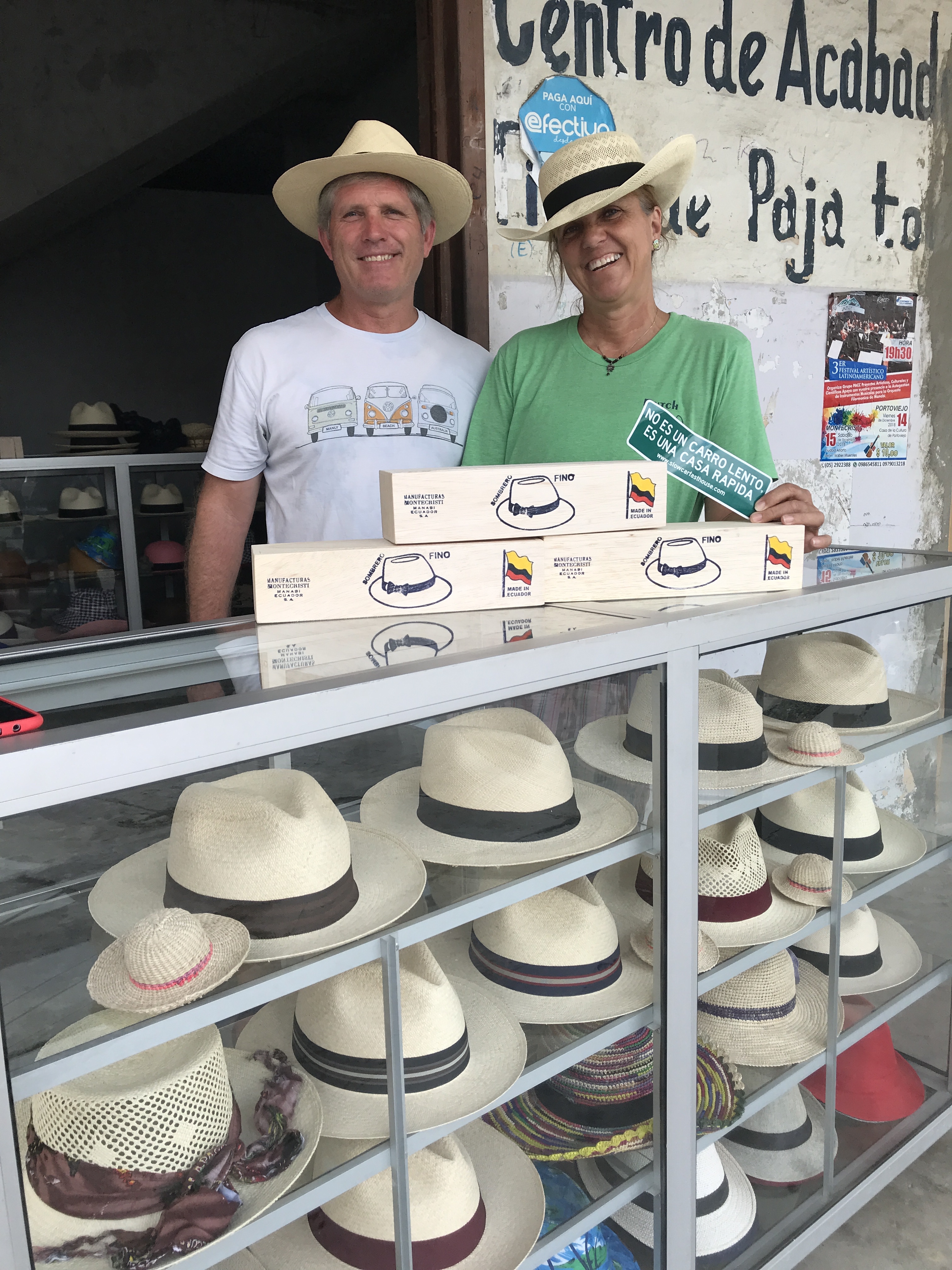 Nica was terribly bored with the whole process. She hung out on the sidewalk trying to stay cool in the stifling heat and humidity.

When we arrived in Cuenca, we visited the museum of the Panama hat. It was very interested to learn the information that I have shared here and see some of the history.   The museum has many different types of hats on display. 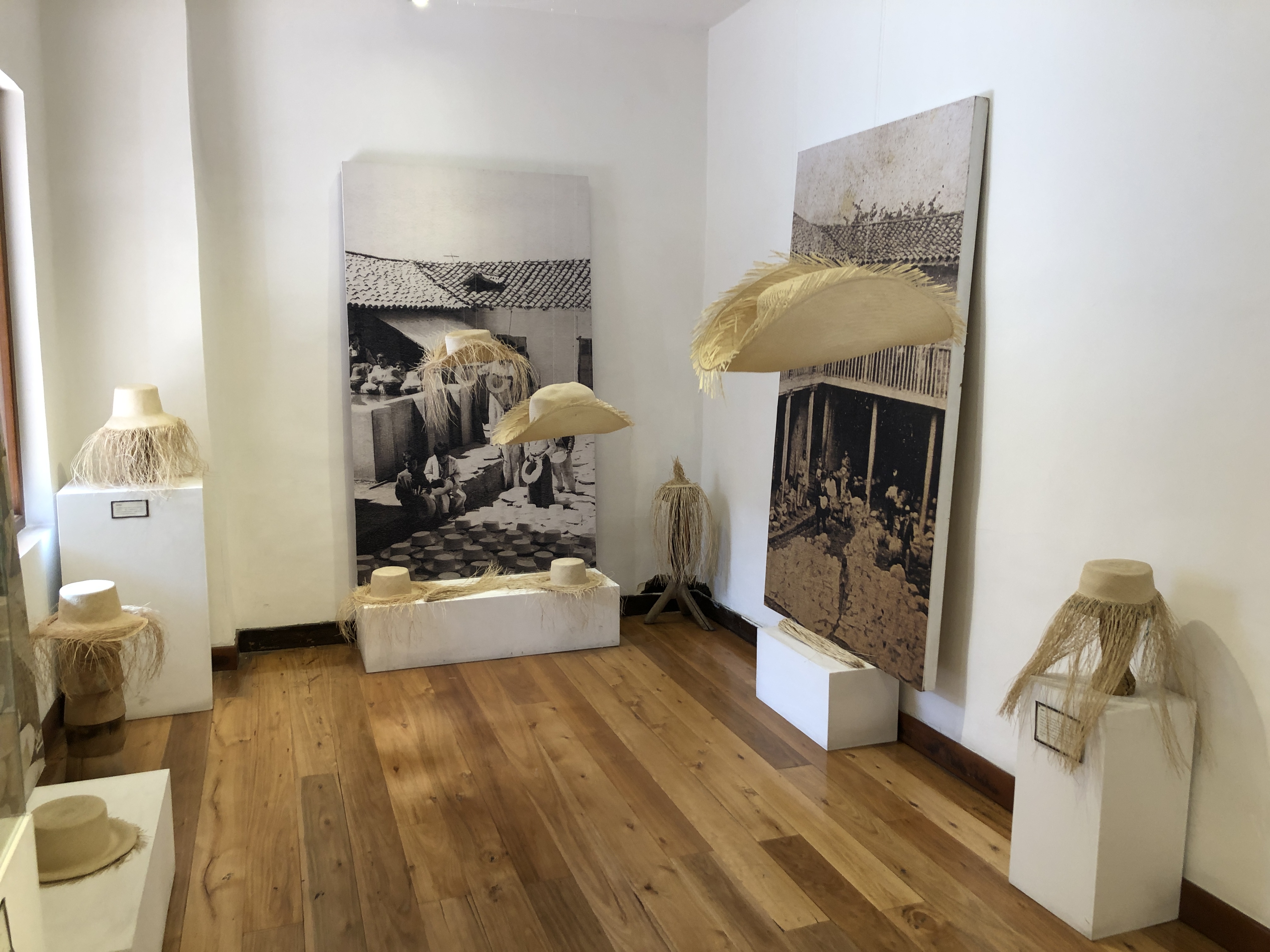 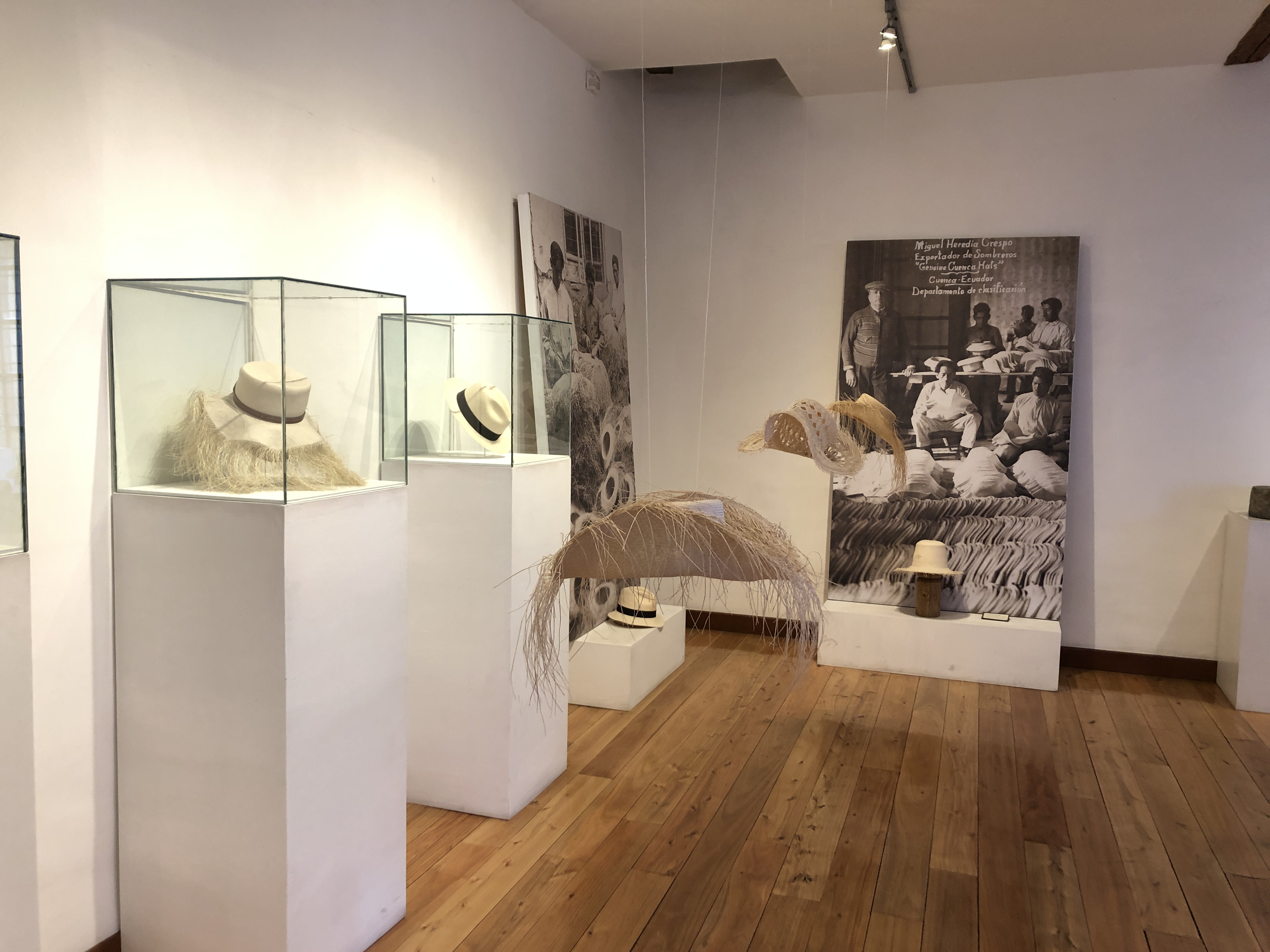 These two hats show the different qualities, reflected in the quantity of reed fibers which determines the quality and price of the finished hat. 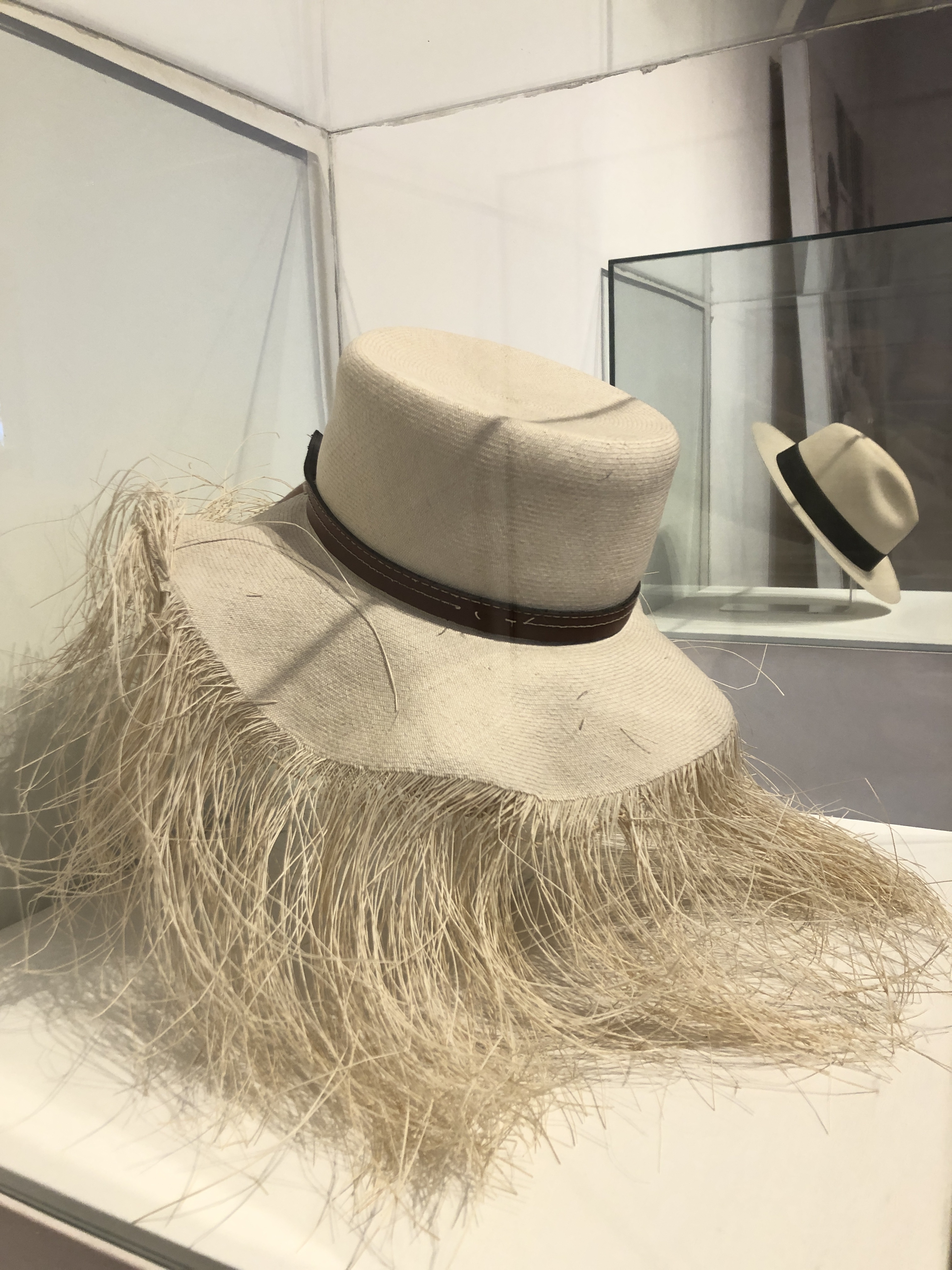 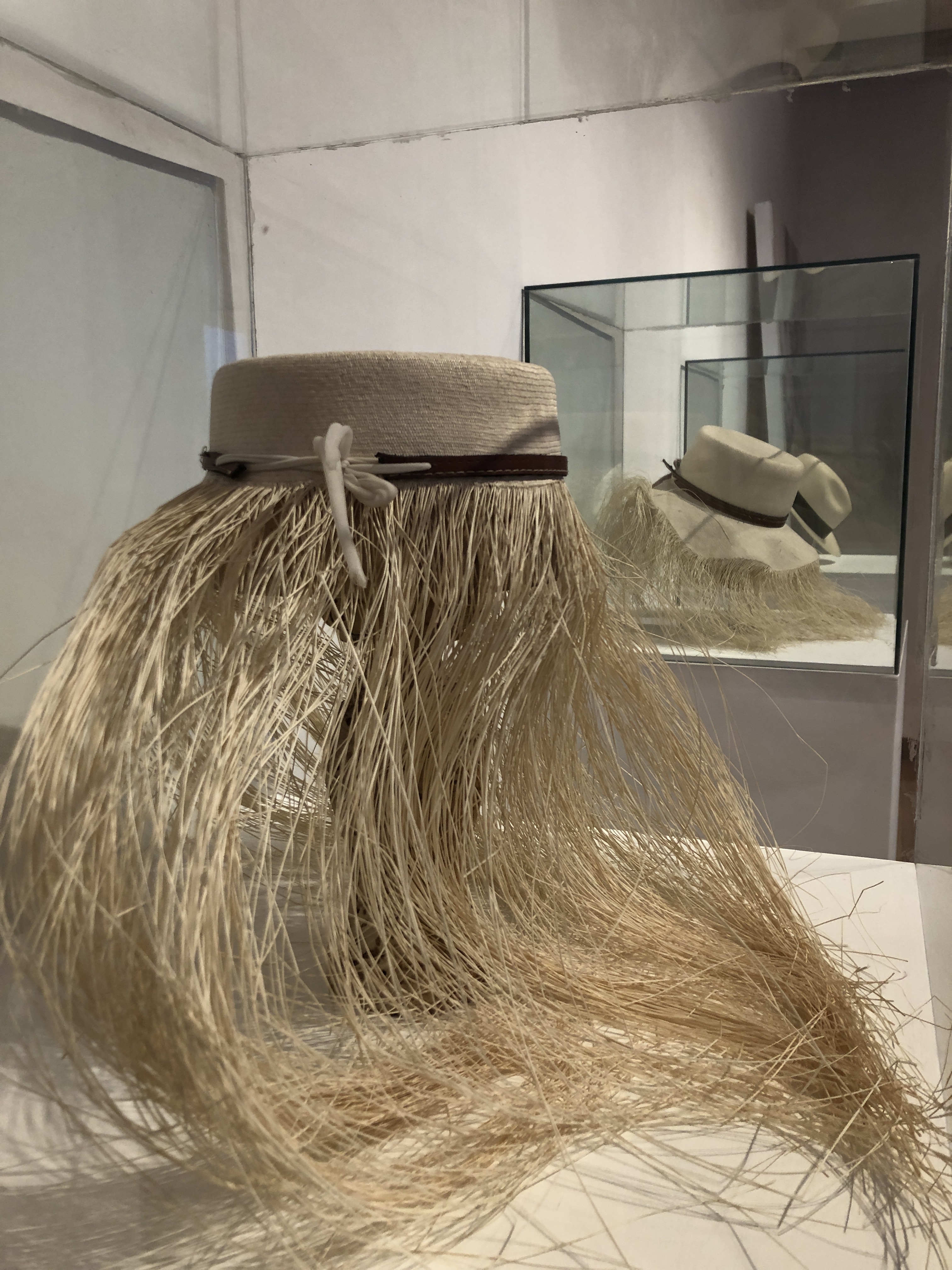 In a glass case at the end of the row is a very high quality hat which is valued at $5,000 usd. Yes, that says five thousand US Dollars!   This is not an uncommon price for a very good Panama hat! 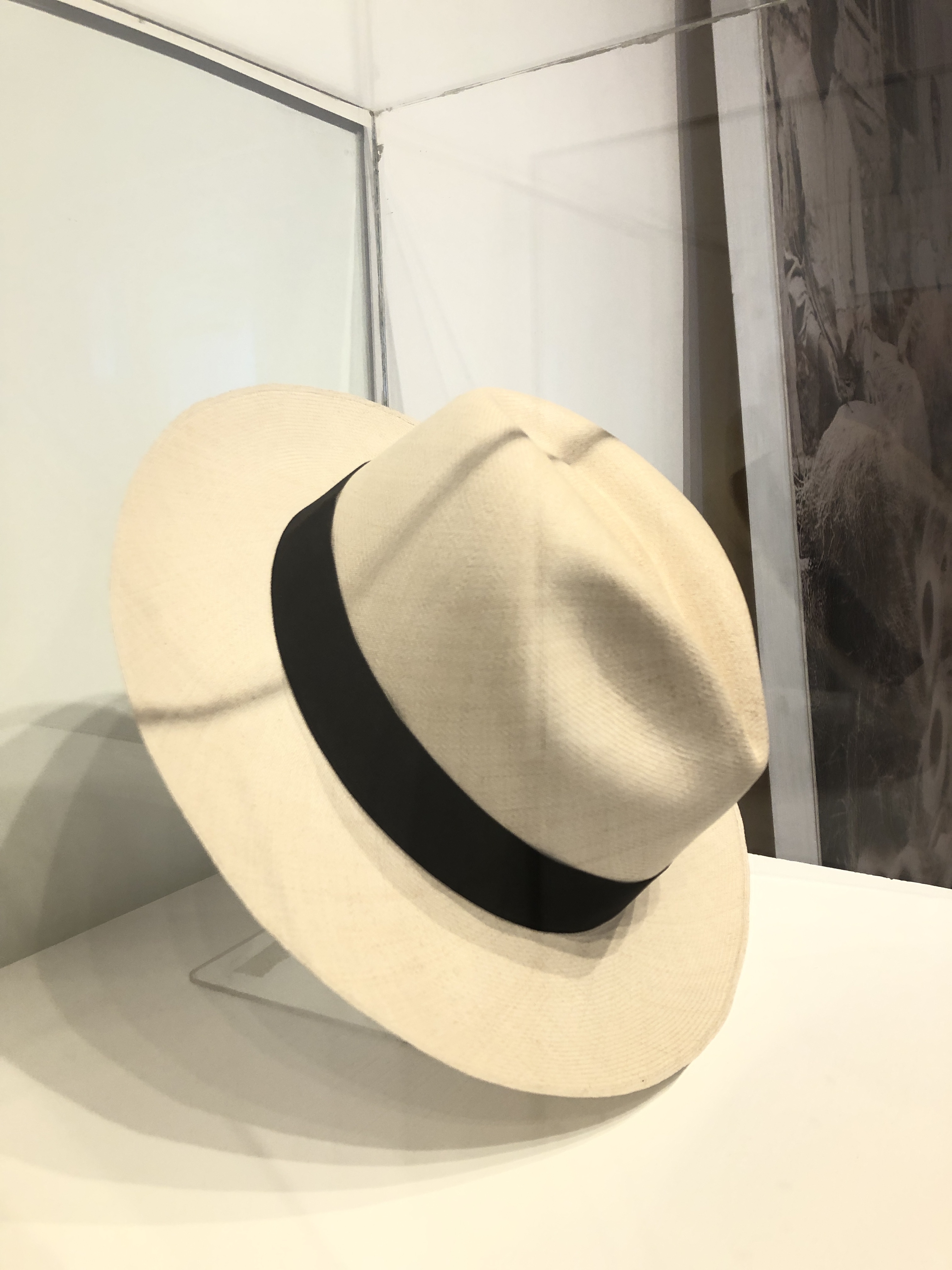 The museum also had some of the old, wooden tools on display.  The hatmakers used wood blocks to shape the top of the hat.  These wooden pieces can be wet and then the hat is stretched over them to make it larger.  They used the steel hat shaper to steam the hat and give it proper form.  The iron was heated in a wood fire to press the brim to the desired flatness or curl of each individual. The wooden mallet could pound out wrinkles and imperfections in a poor hat.  Notice the hats in the photos behind the tool table. 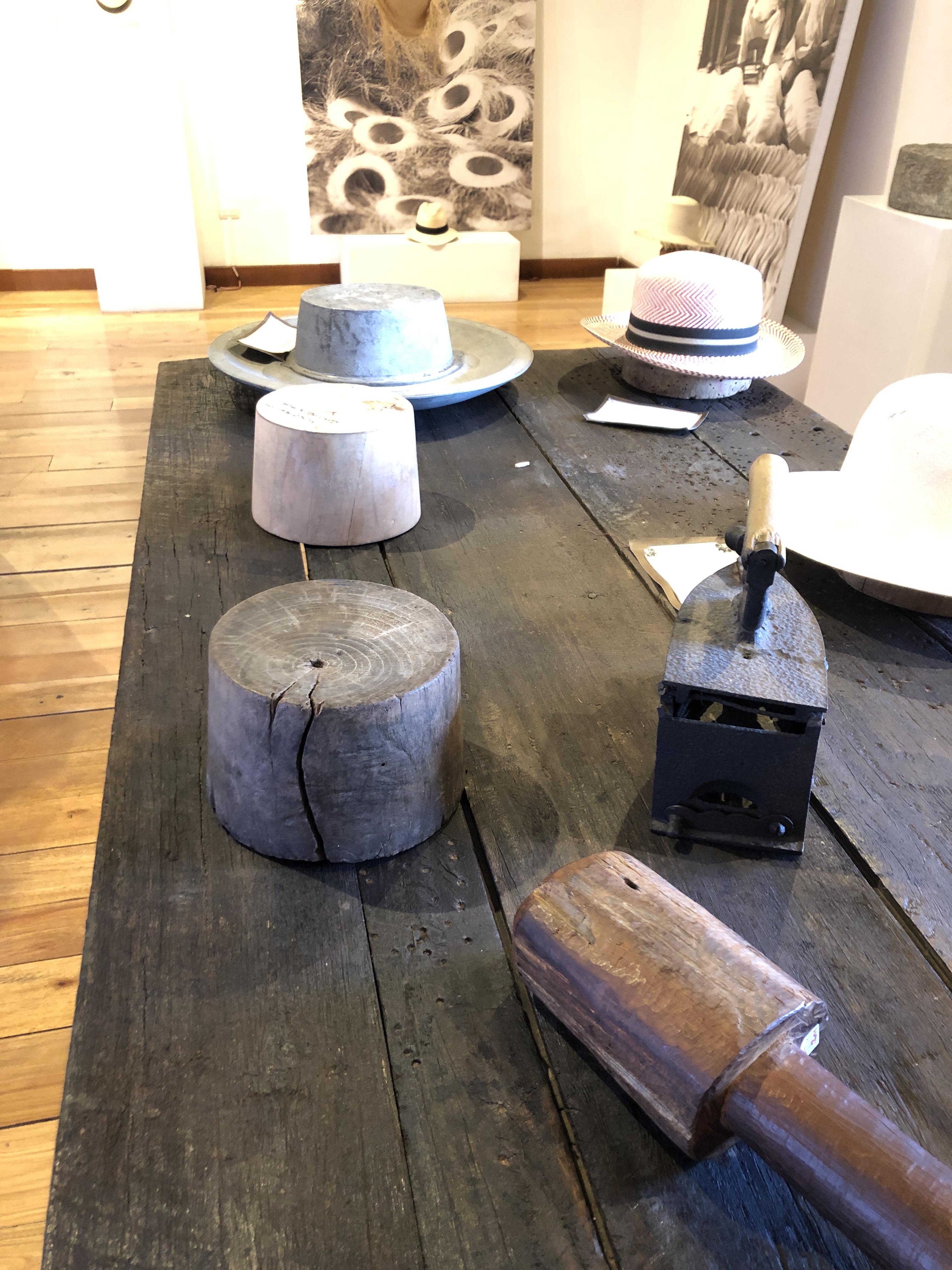 The walls outside the museum display some beautiful murals depicting the hatmaking tradition in Cuenca. 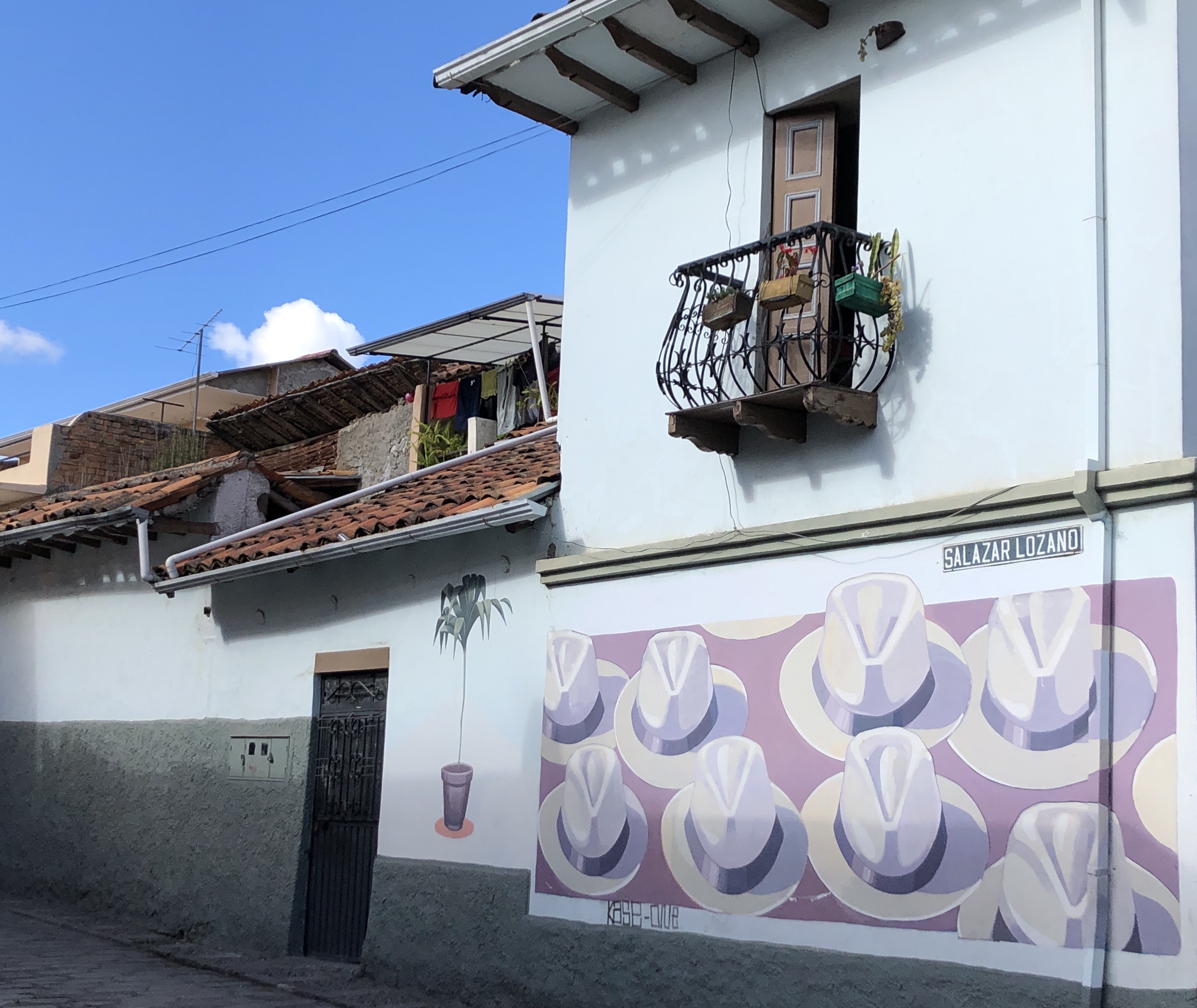 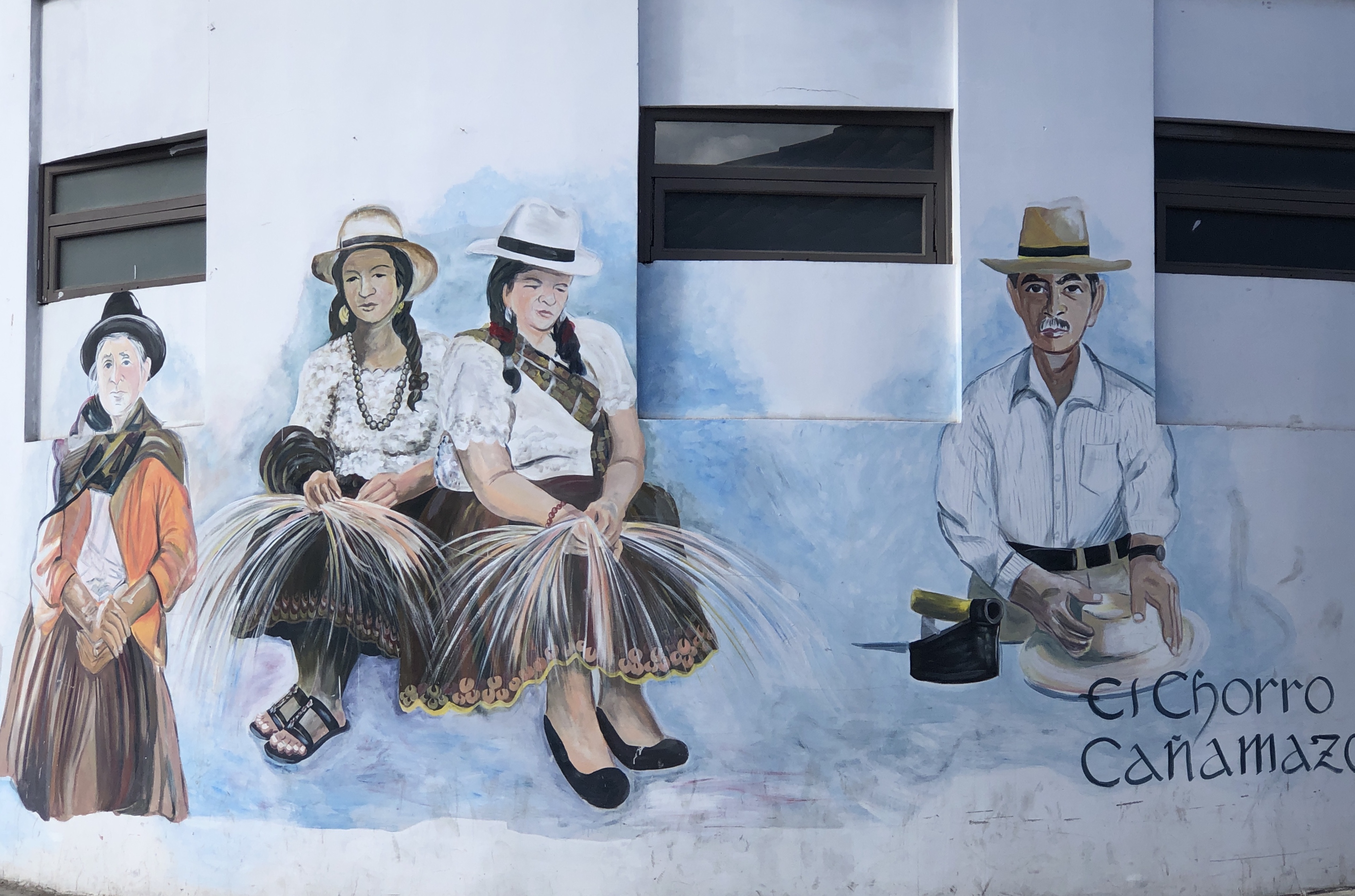 And as soon as we walked out of the museum we encountered a city official walking down the sidewalk. He was dressed sharply in fine slacks, a nice sport coat and proudly wearing the historical emblem of Ecuador, the Panama hat! 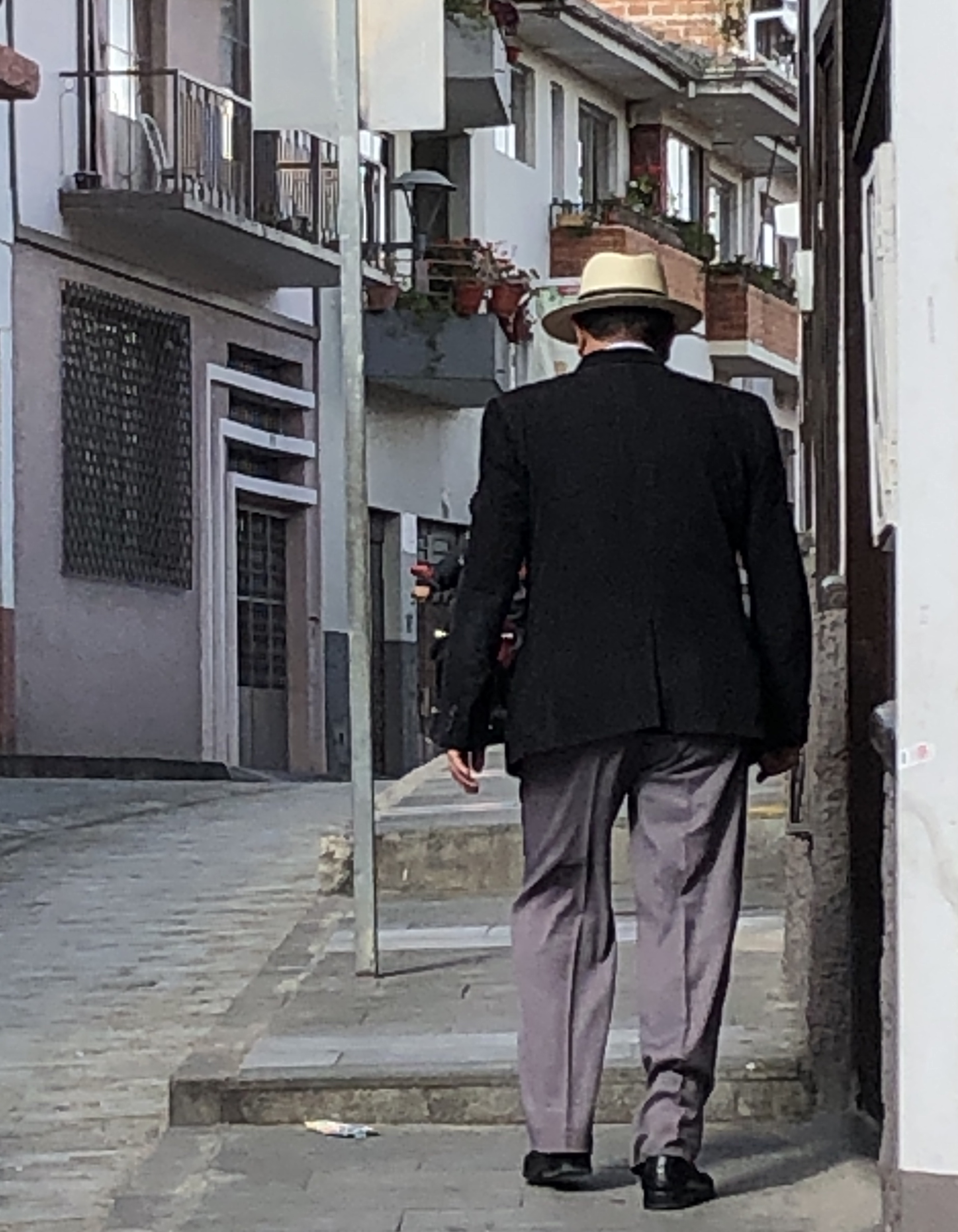 Looking sharp.   Do you want to read a little more, here is a link to Wikipedia.

2 thoughts on “Ecuador- What is a Panama hat, and why is this in the Ecuador stories?”