Quilotoa is a lake. But not just your typical lake. Quilotoa is a lake that has formed in the crater of a volcano. The beautiful Laguna Quilotoa is located in a mountainous region of Ecuador that is inhabited primarily by indigenous people. These natives live a very traditional lifestyle in many of the villages. The area around Quilotoa was fascinating to us. 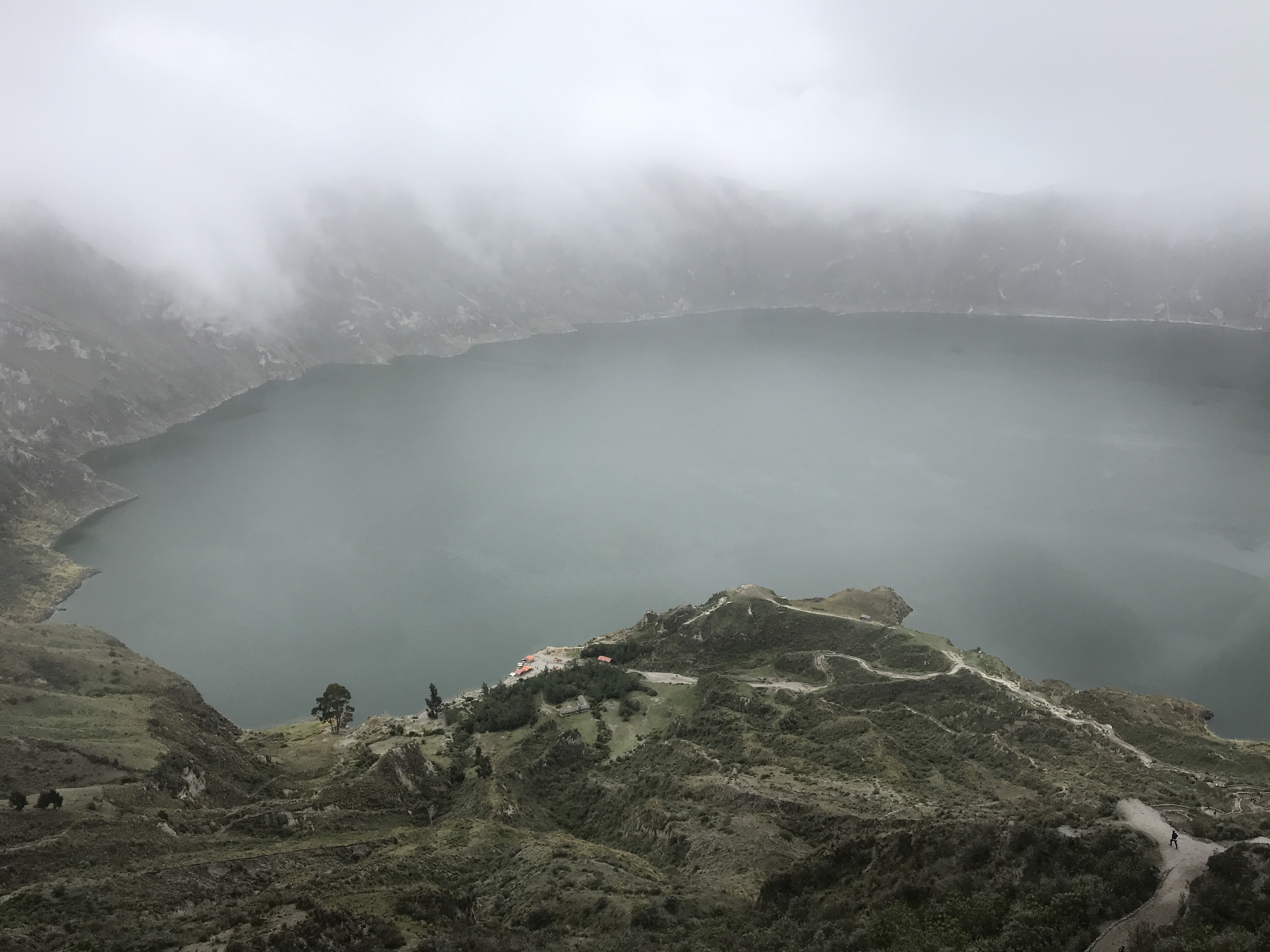 When we first arrived, we parked near the lakefront in the foggy village.  We quickly met a local man who is a woodworker, builder and offers guided tours of the surrounding villages. 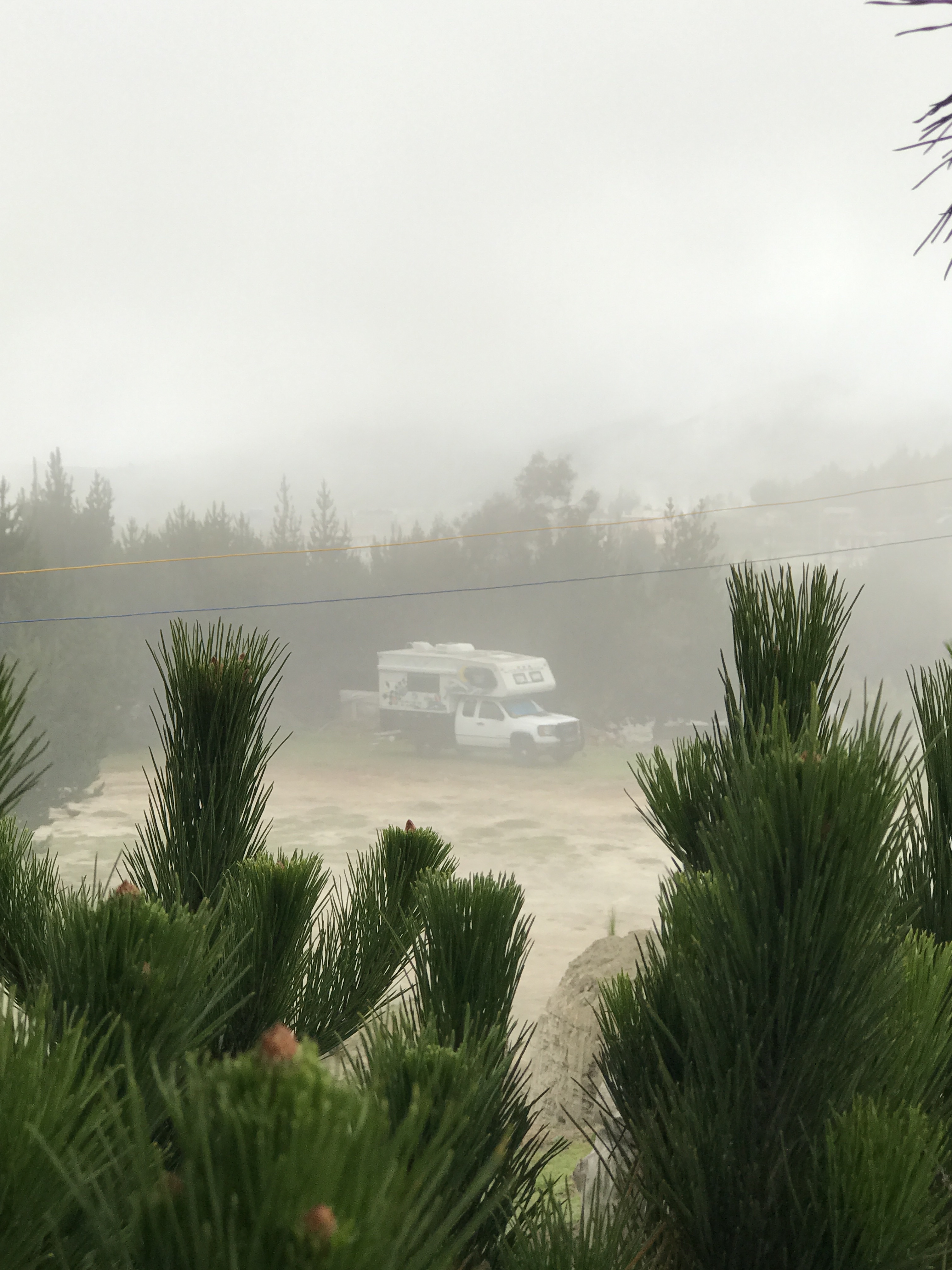 Then we walked around, exploring the touristic part of town.  We found cute shops and restaurants. But because it was late, shops were beginning to close up. We watched a young indigenous woman pack up her wares into a large bundle. Just as she began to lift it, Mike offered to carry it for her. She declined his help politely and said in Spanish, “you may carry it today, but I will still have to carry it tomorrow. Such is life.” And away she went to pack away her ponchos and trinkets for the night. 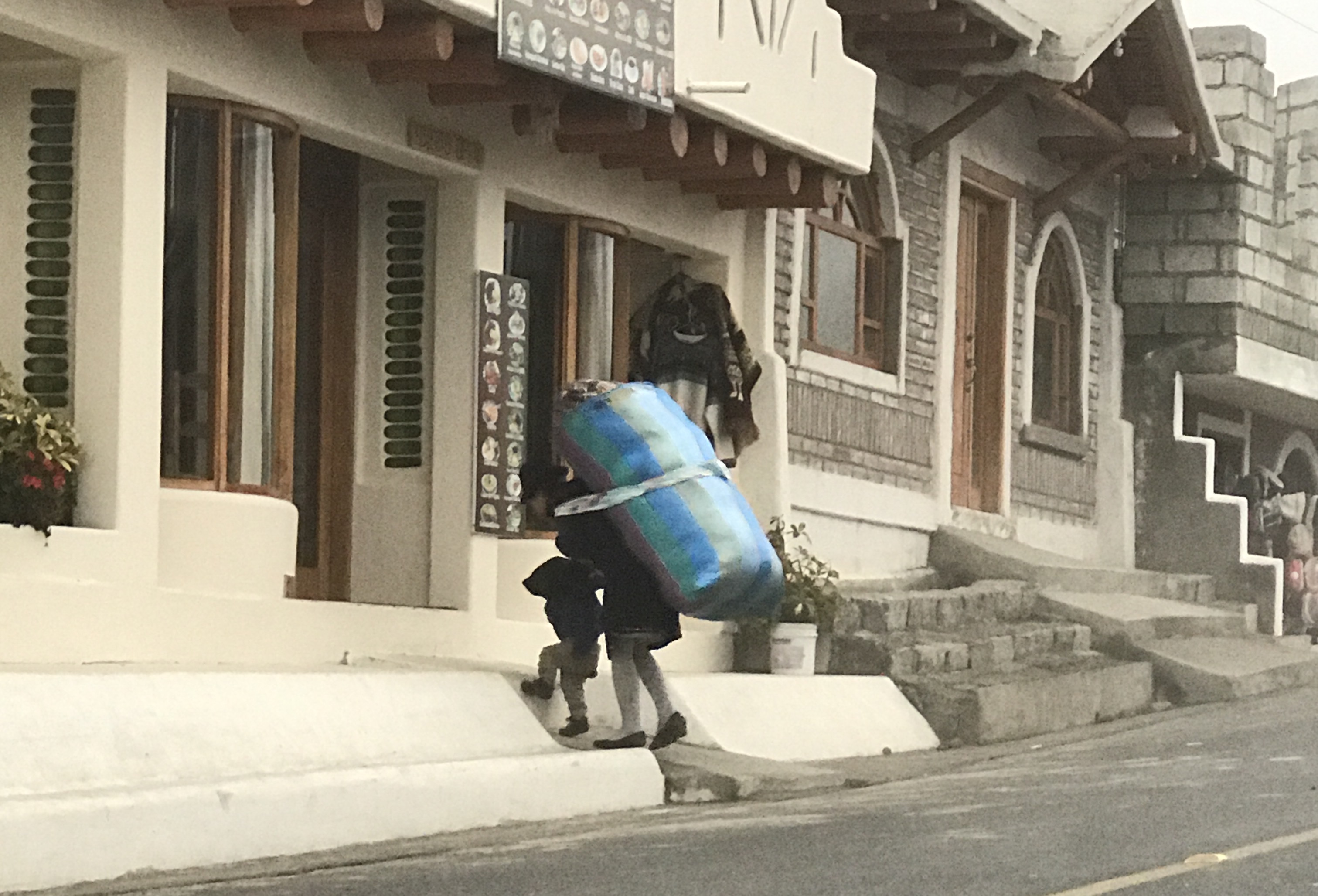 We spent quite a bit of time on the edge of the crater, looking down into the cold, still water below us. The area is hauntingly beautiful. 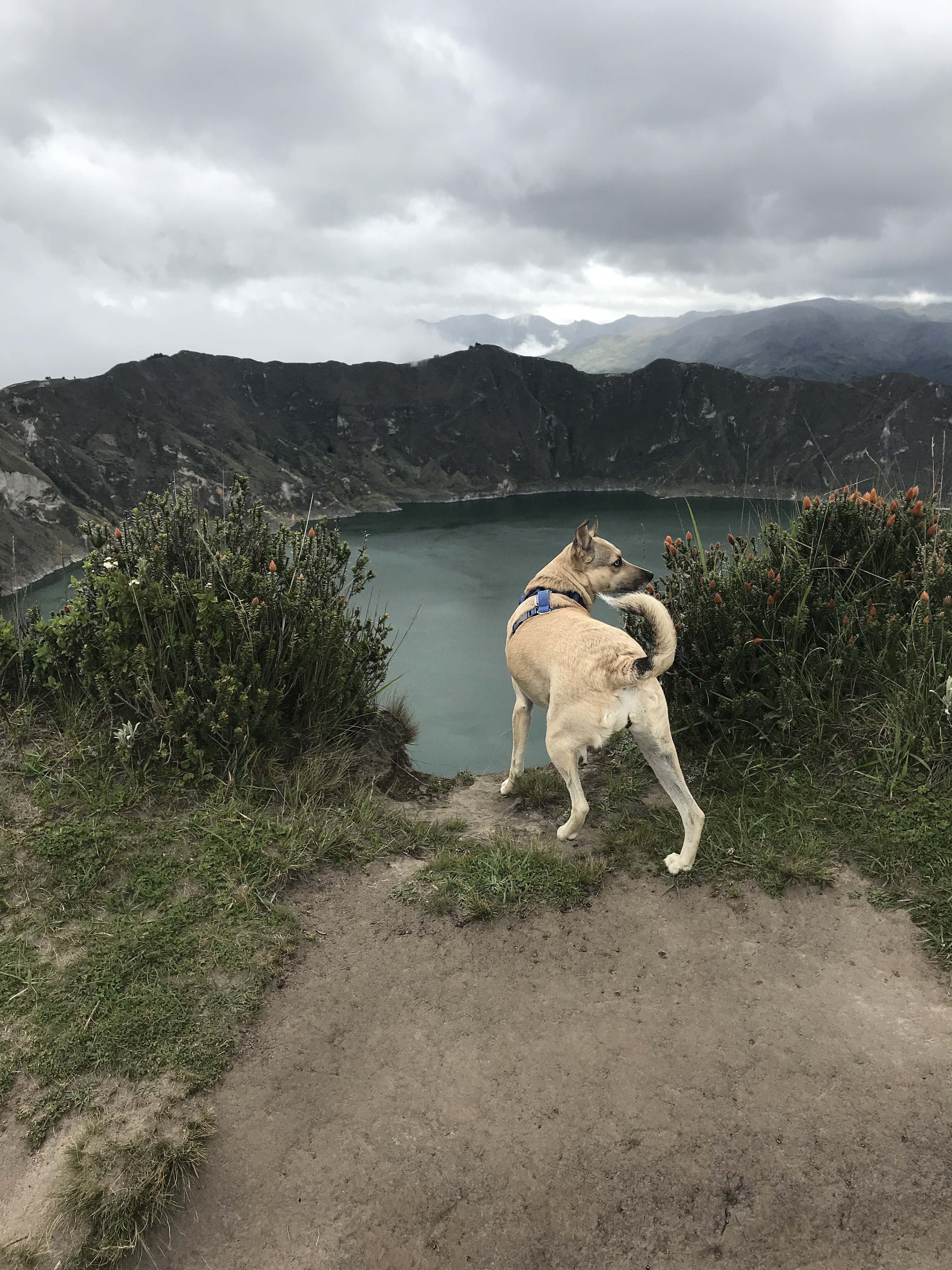 The people in this area dress in traditional styles including skirts, ponchos and hats.  Many locals spend long hours each day with their sheep and dogs in the grassy fields.  We learned that they are protecting their herd from wolves that roam the mountains. 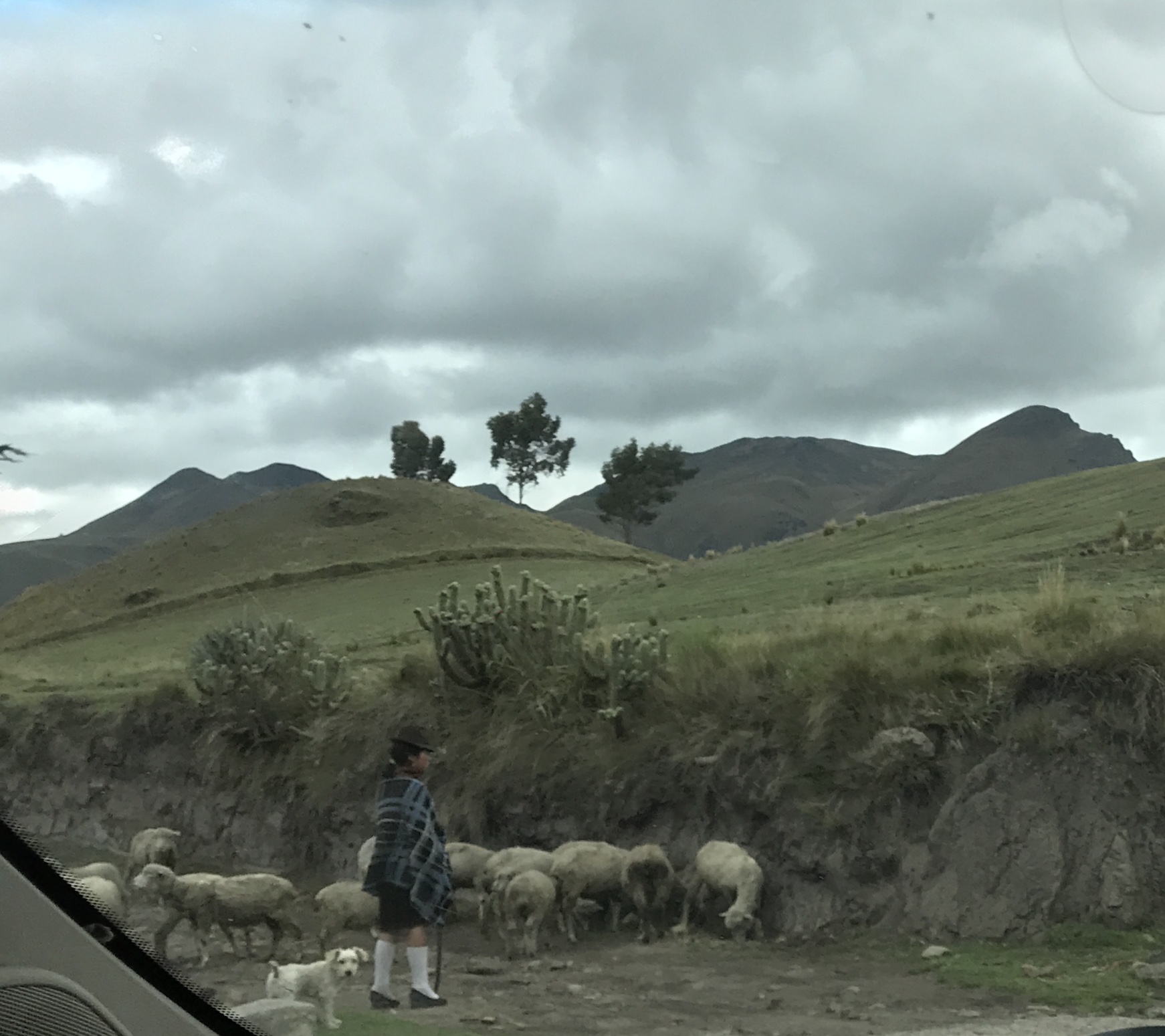 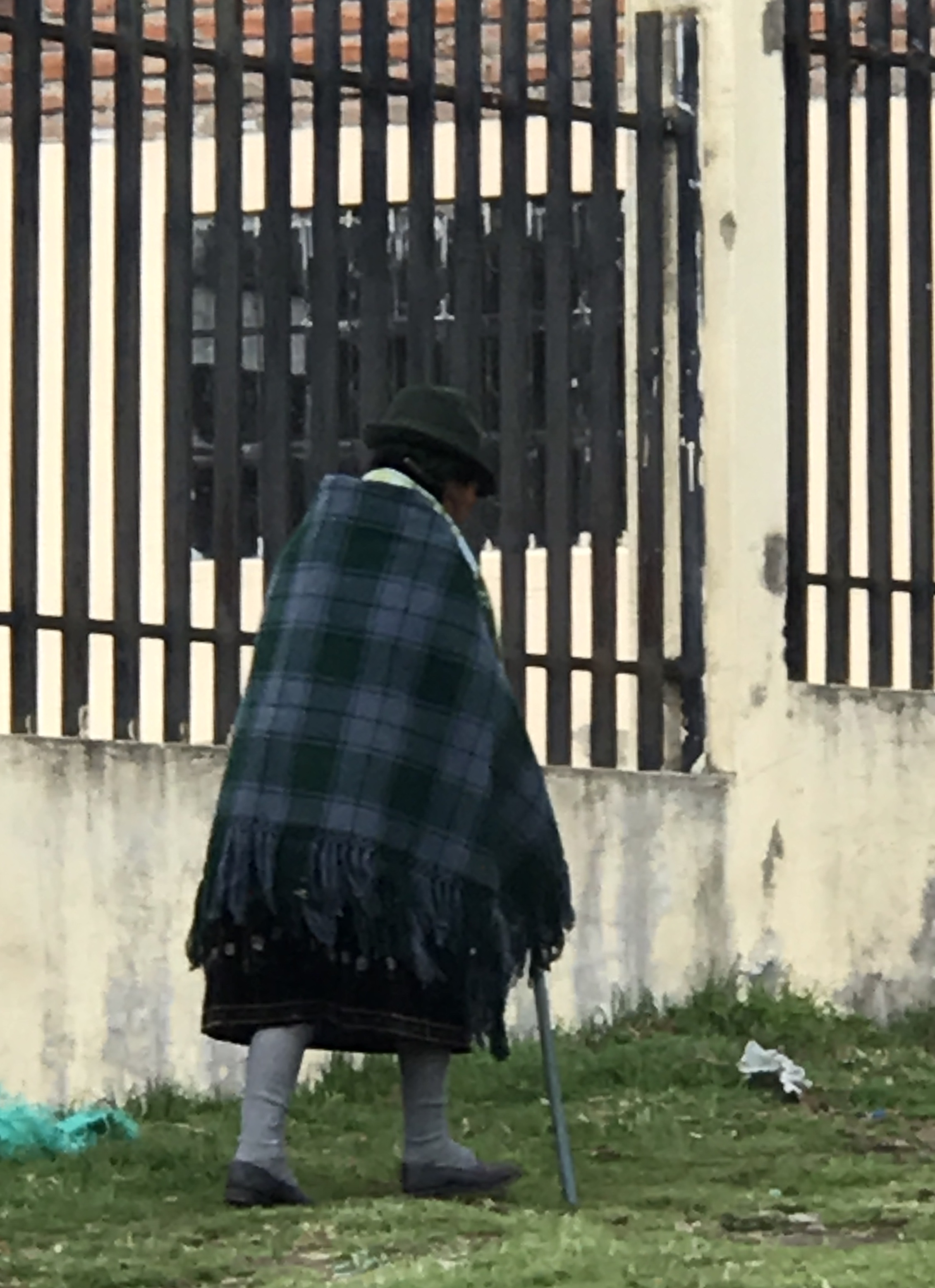 But after hard work comes some fun and celebration. One village we passed through was holding a large festival.  This included a live band on the stage and many vendors selling street food. 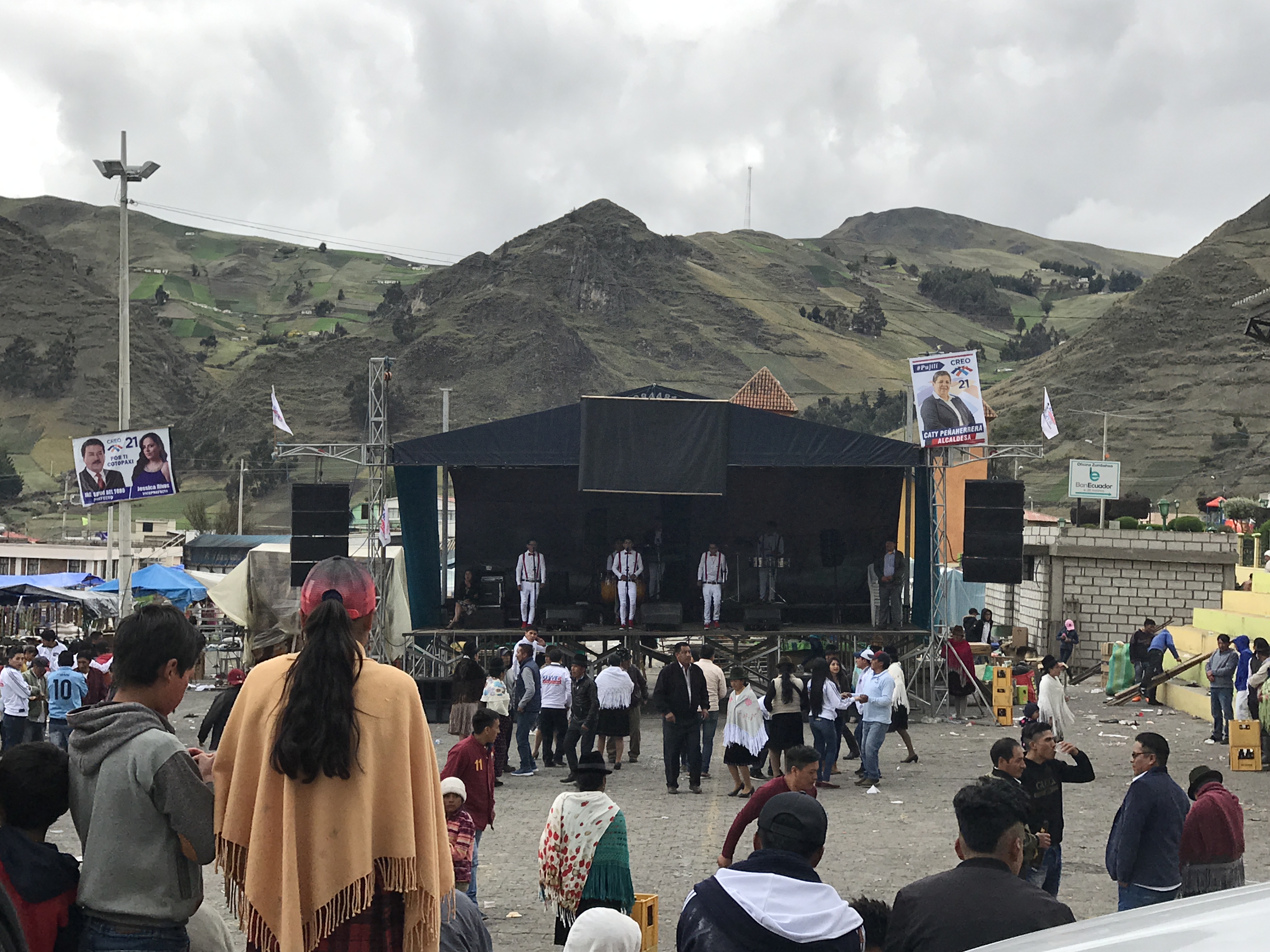 Another type of gathering we learned about is called a minga. A minga takes place when a project needs to be completed and a group of people comes together to make it happen. In these photos we see a minga of women who are constructing a block wall around the village cemetery.   The minga group will meet daily, foregoing their own tasks and chores, until the project is completed. Everyone contributes equally to these work parties.  A minga may be a gathering of families, or just men or just women, as this one was.  Sometimes the project is for the community, and sometimes the minga benefits an individual person or a family.  Our guide suggested that the men may be off in a different minga project such as a barn-raising or developing a new field. 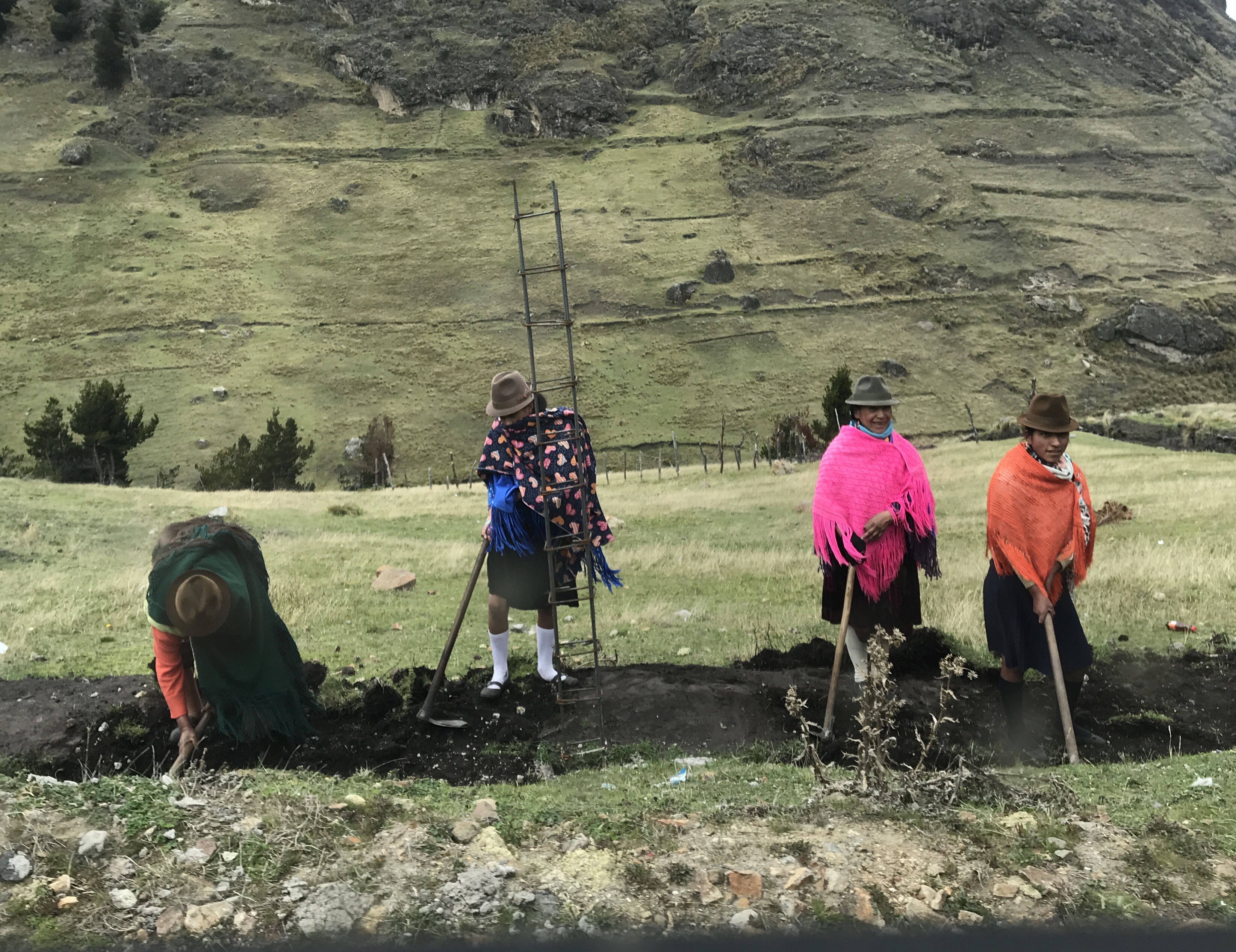 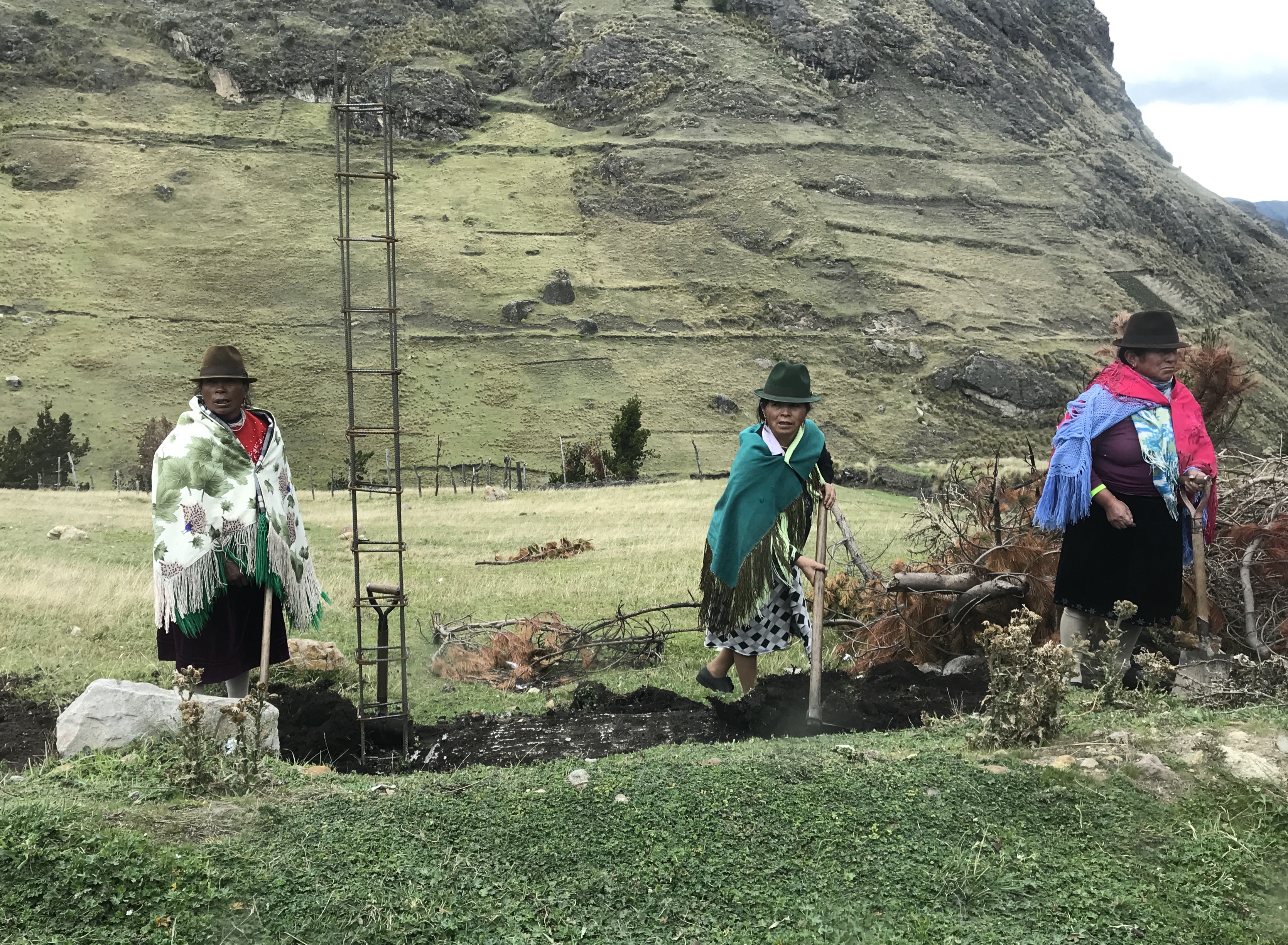 An important part of the tradition of this area is the use of the alpaca. These are used both as a beast of burden and also for their soft, woolen fur. Alpaca are friendly and cooperative with humans. And as seen in this video, they will ride in the back of a truck! 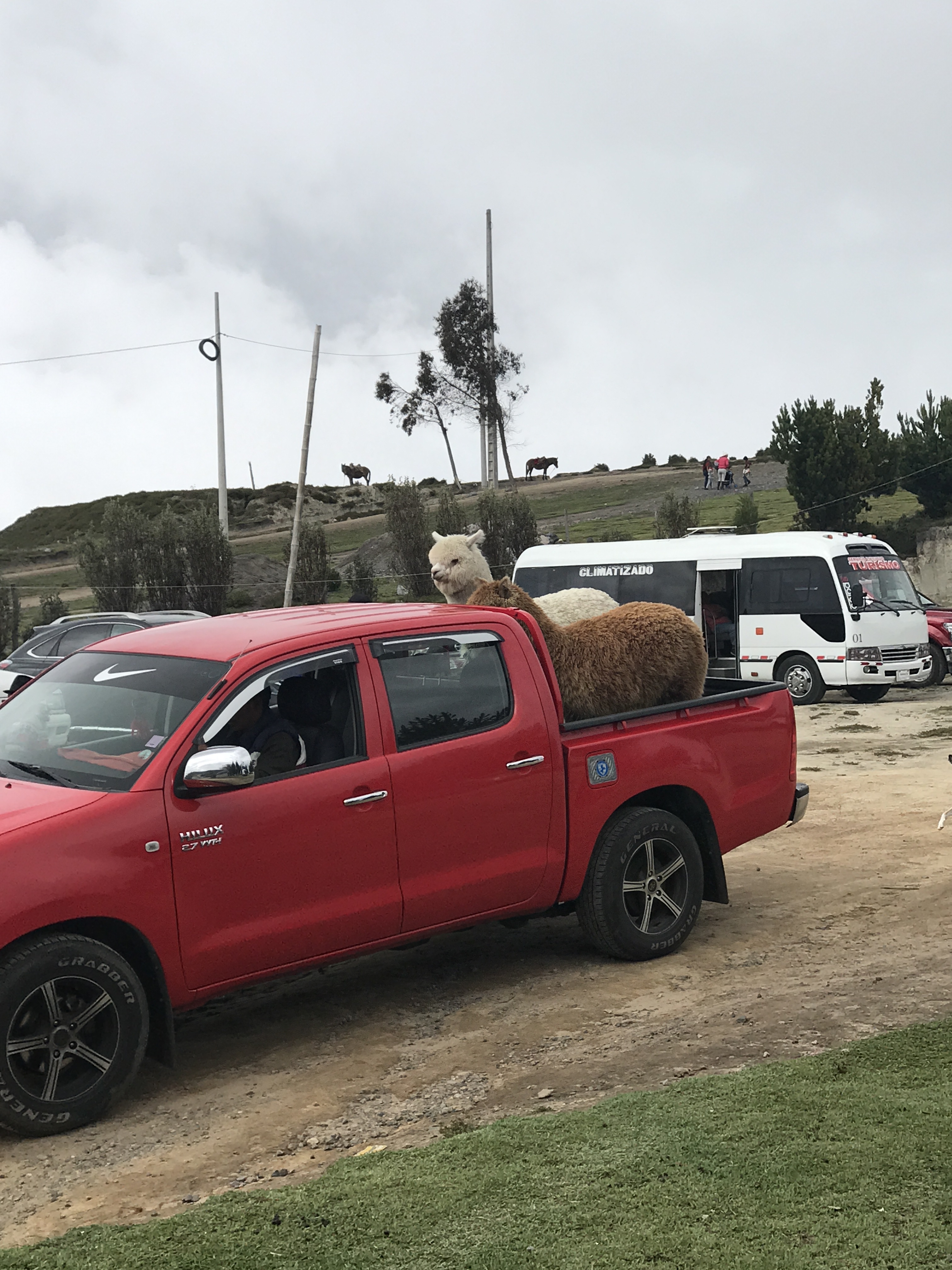 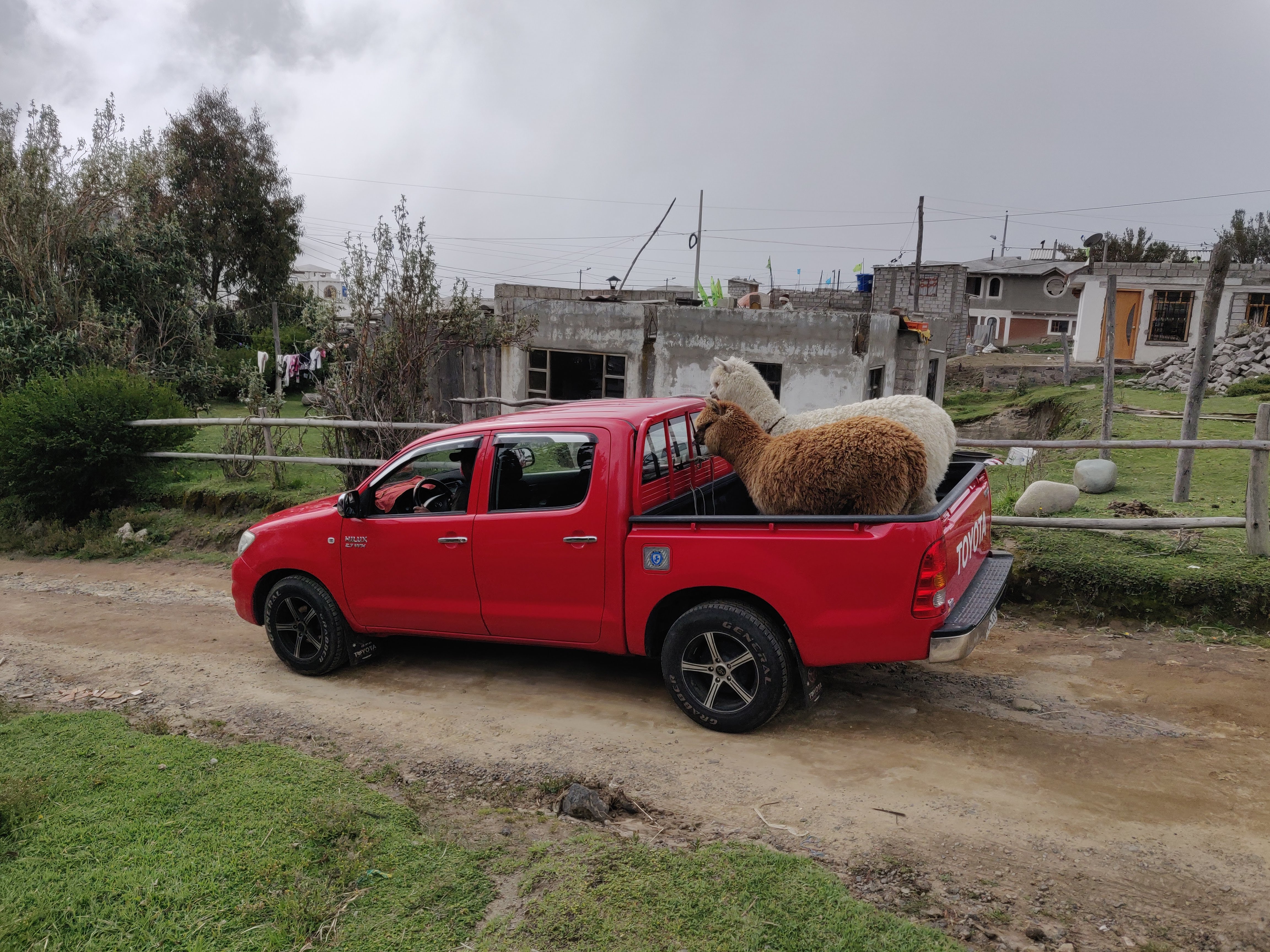 One day we decided to pay the nice man to guide us to the fabled “Inca Cave”. This was an interesting choice, as saw and learned about so much more. It began when we piled into his old pick up and headed toward the farm fields. We saw a tractor plowing a nearly vertical slope to prepare a cornfield.

Then we saw a sandstone canyon, etched and carved by a long-ago river and generations of wind.  This photo doesn’t do enough to illustrate the depth and width of this impressive canyon. 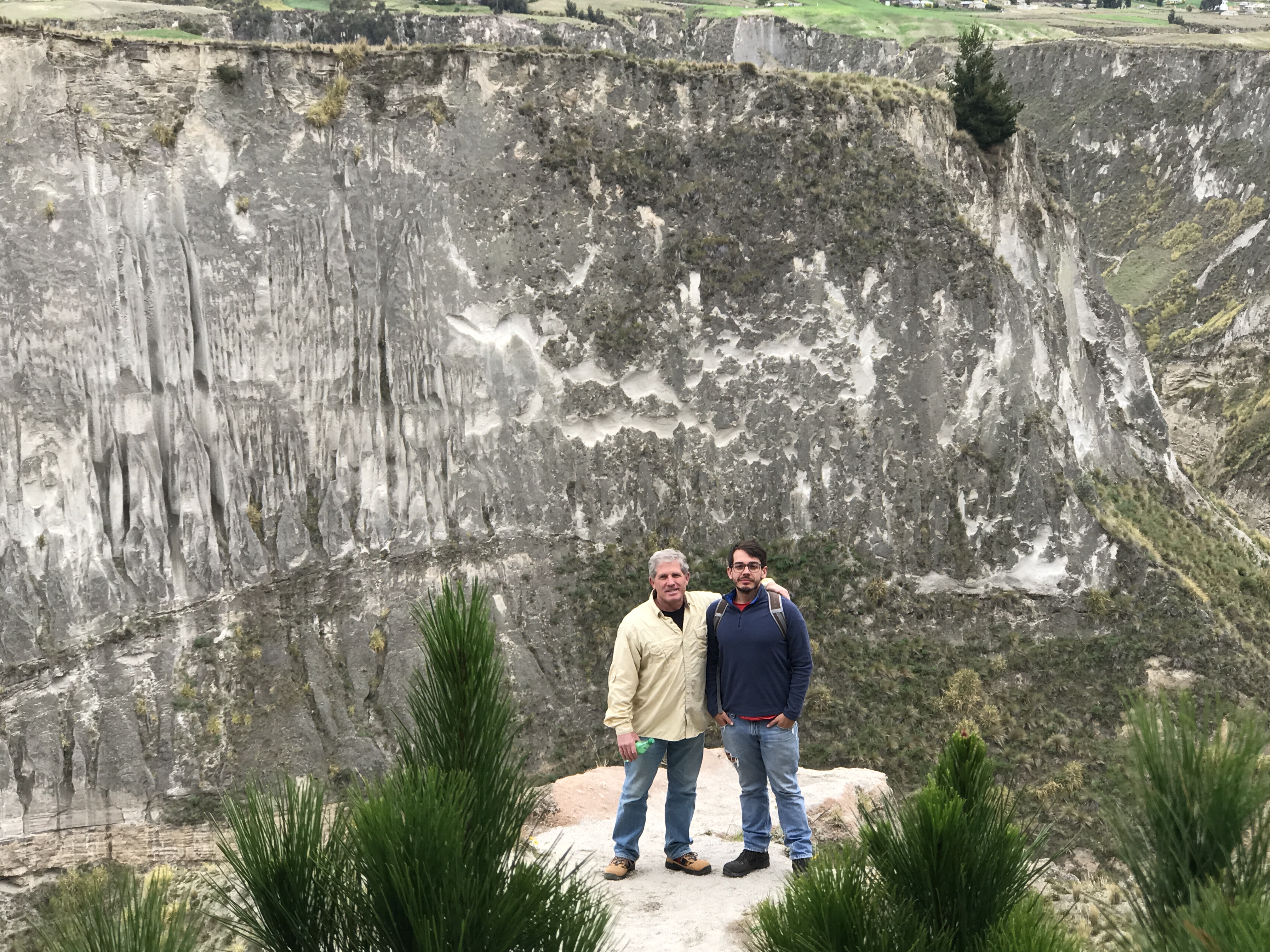 Finally, we began our hike to the fabled Inca Cave. The hike started on another steep slope, and at about 9,000 feet elevation. By the time we reached the top and glimpsed the cave, we were quite winded (okay, we could hardly breathe!). 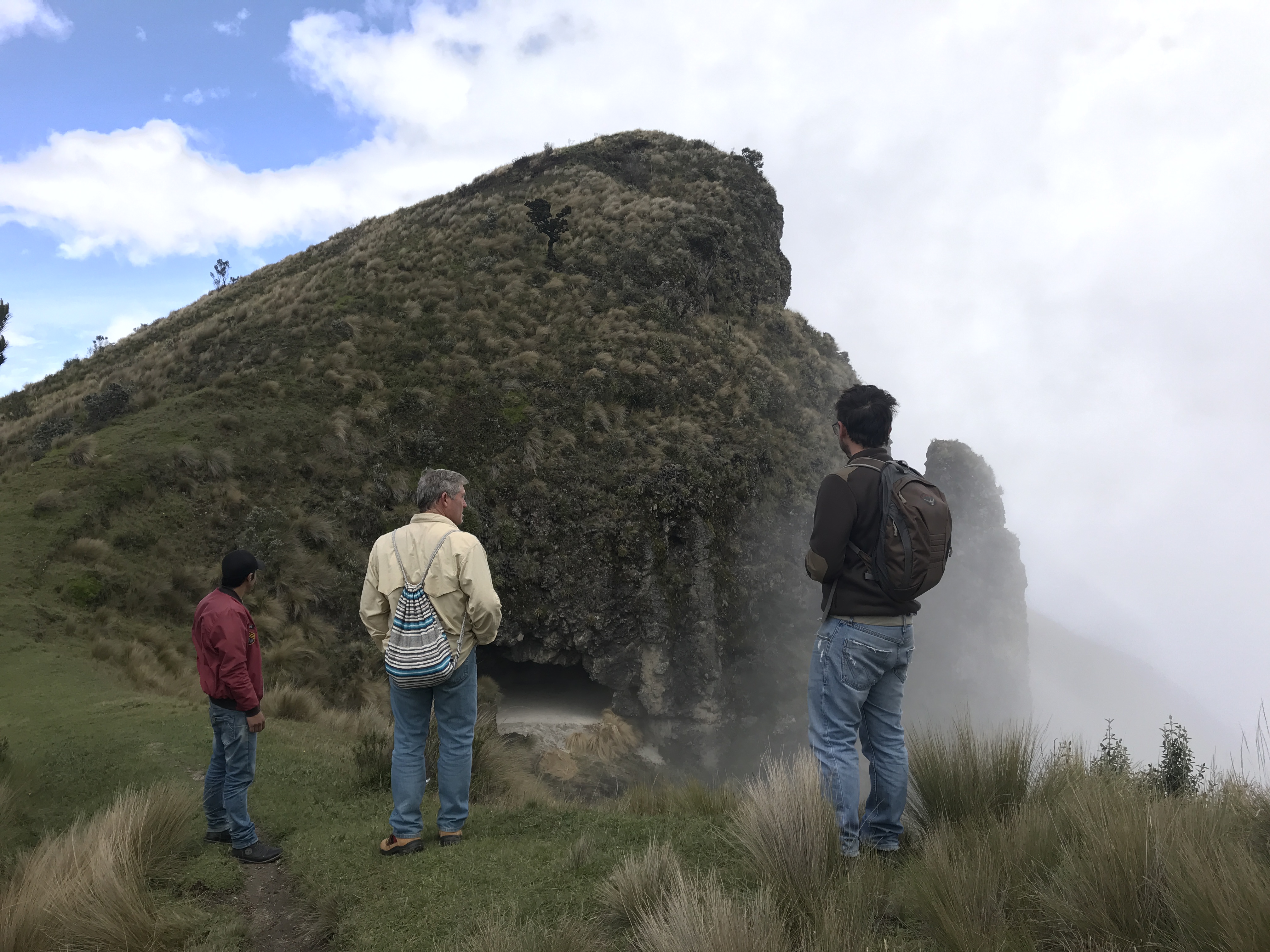 But we continued onward to have a look at the inside of the cave.  This giant cave has been used by many generations as a place of ceremony and celebration. Once or twice a year it is filled with villagers, food and the songs of the shaman who speak to the past and the future. This huge cave has great significance to the people of the Quilotoa area. 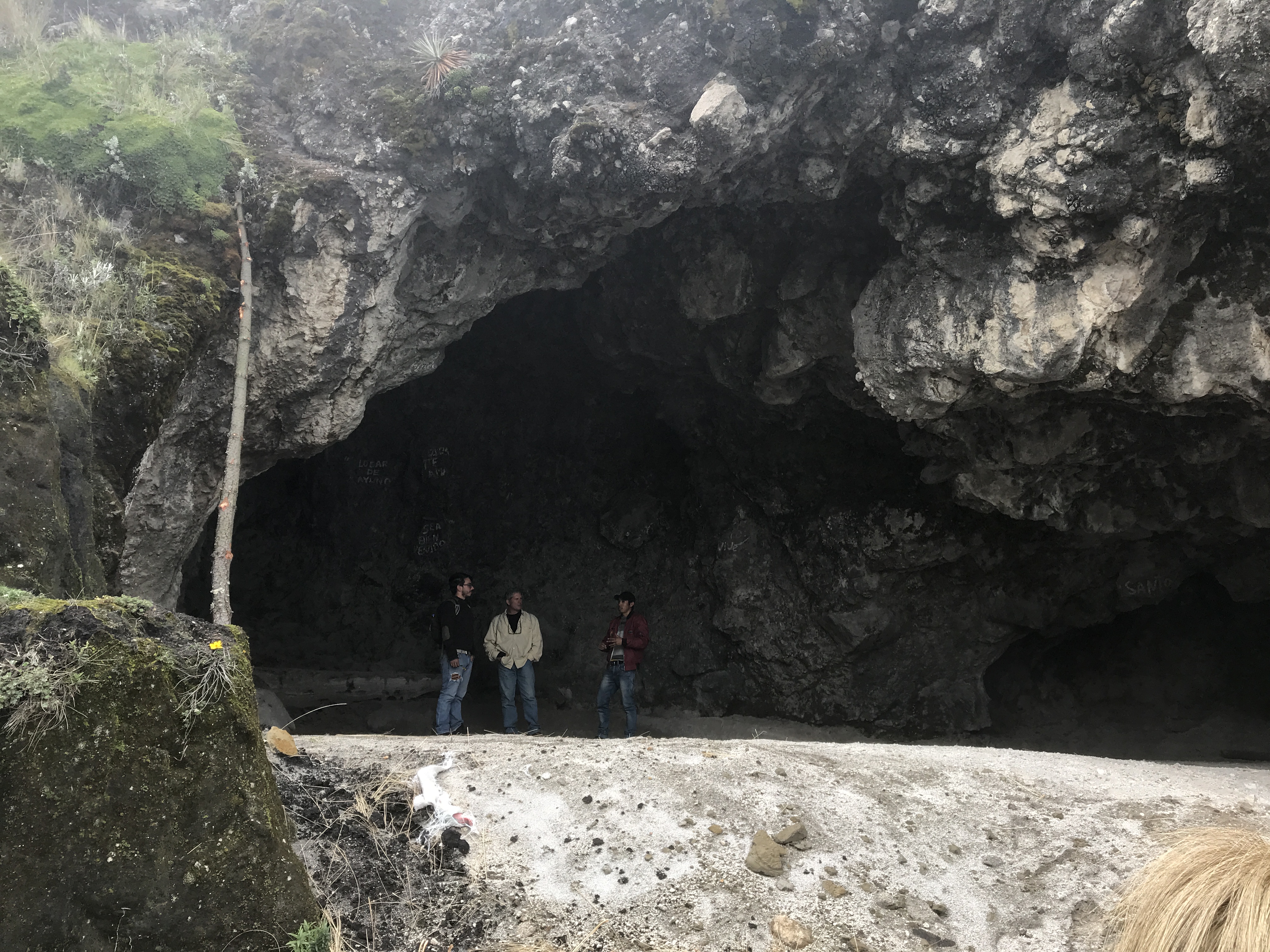 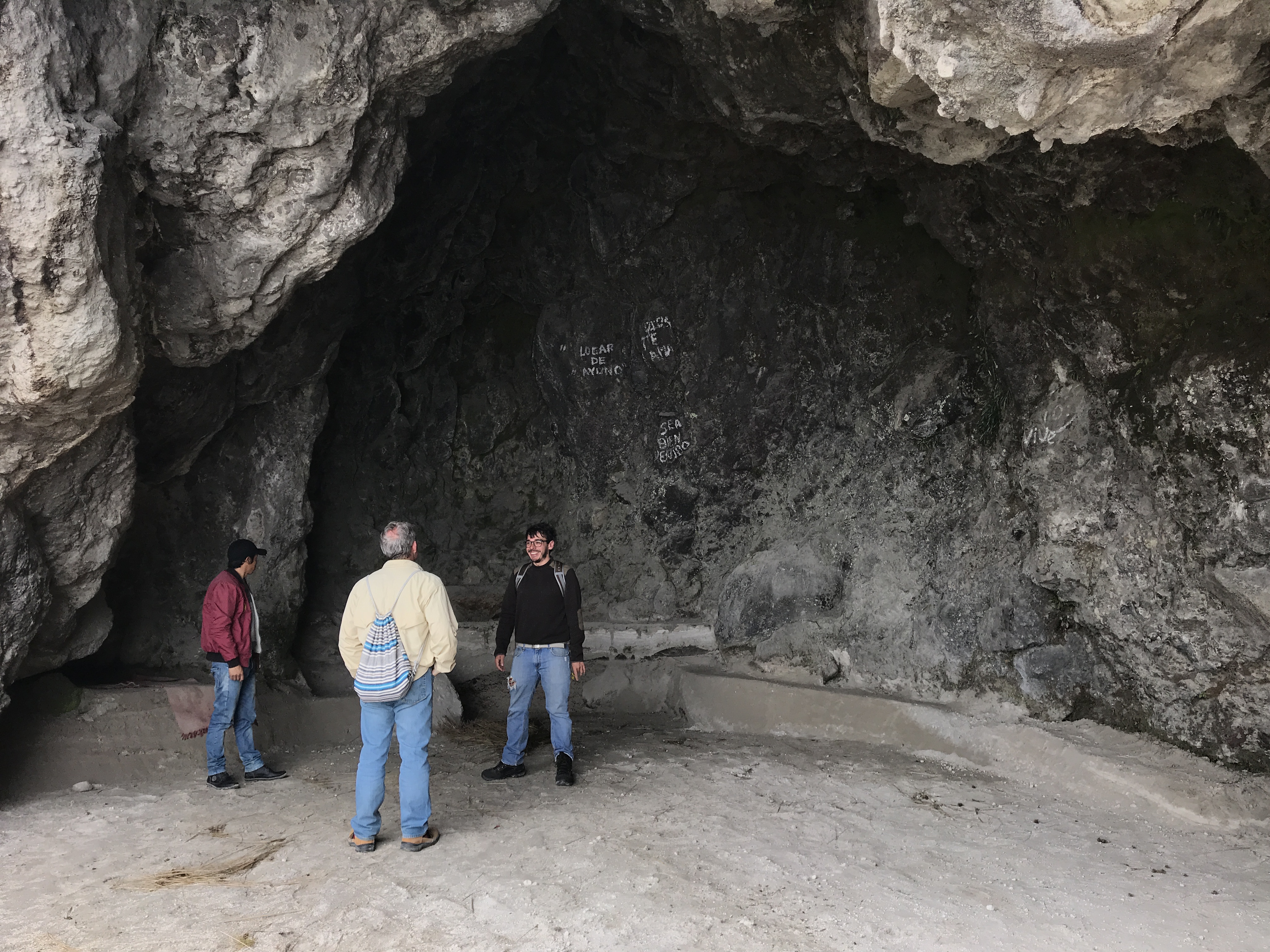 Our guide also told us the ancient tale of the young girl that was taken by the great condo while she was gaurding her sheep in the fields along with her dogs. When she vanished, the two yellow dogs  tried to save her.  Amopola and Azocina were the names of the faithful dogs.  But even with much searching and barking, the dogs were unable to rescue her. Legend has it that still they wander the hills looking for their owner. The dogs are represented in the names of the two yellow flowers that dot the hillsides. In this photo you see Amopola and Azocena. We know them as the yellow daisy and yellow dandelion.

Dsiclaimer: Because of the language differences, and our guides distraction, I may have misunderstood large parts of that legend!  But here is a photo of the two wildflowers anyway! 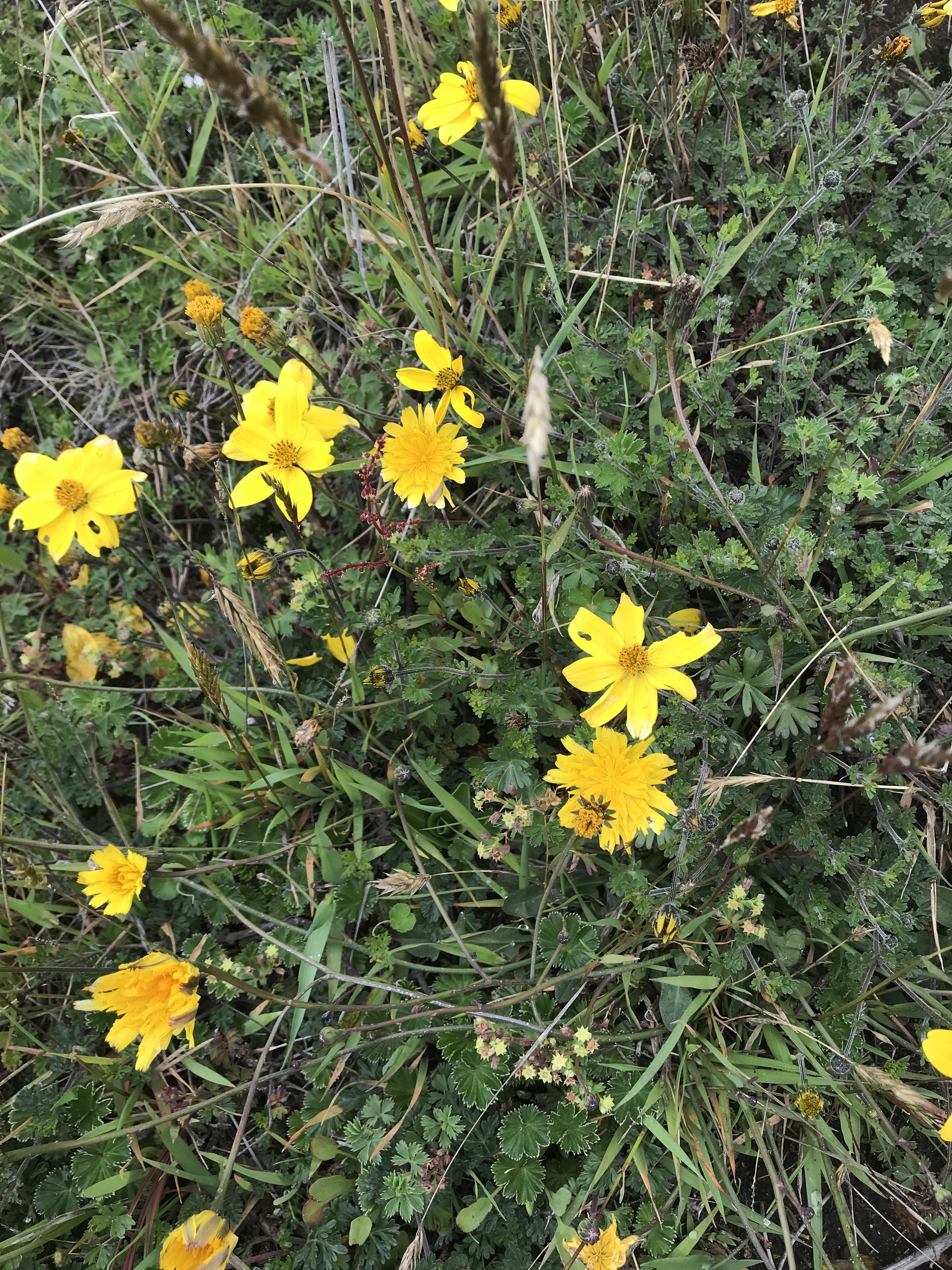 Our day with the guide ended at a fancy wooden overlook on the edge of Laguna Quilotoa. These photos and the video help illustrate the size and beauty of the lake. 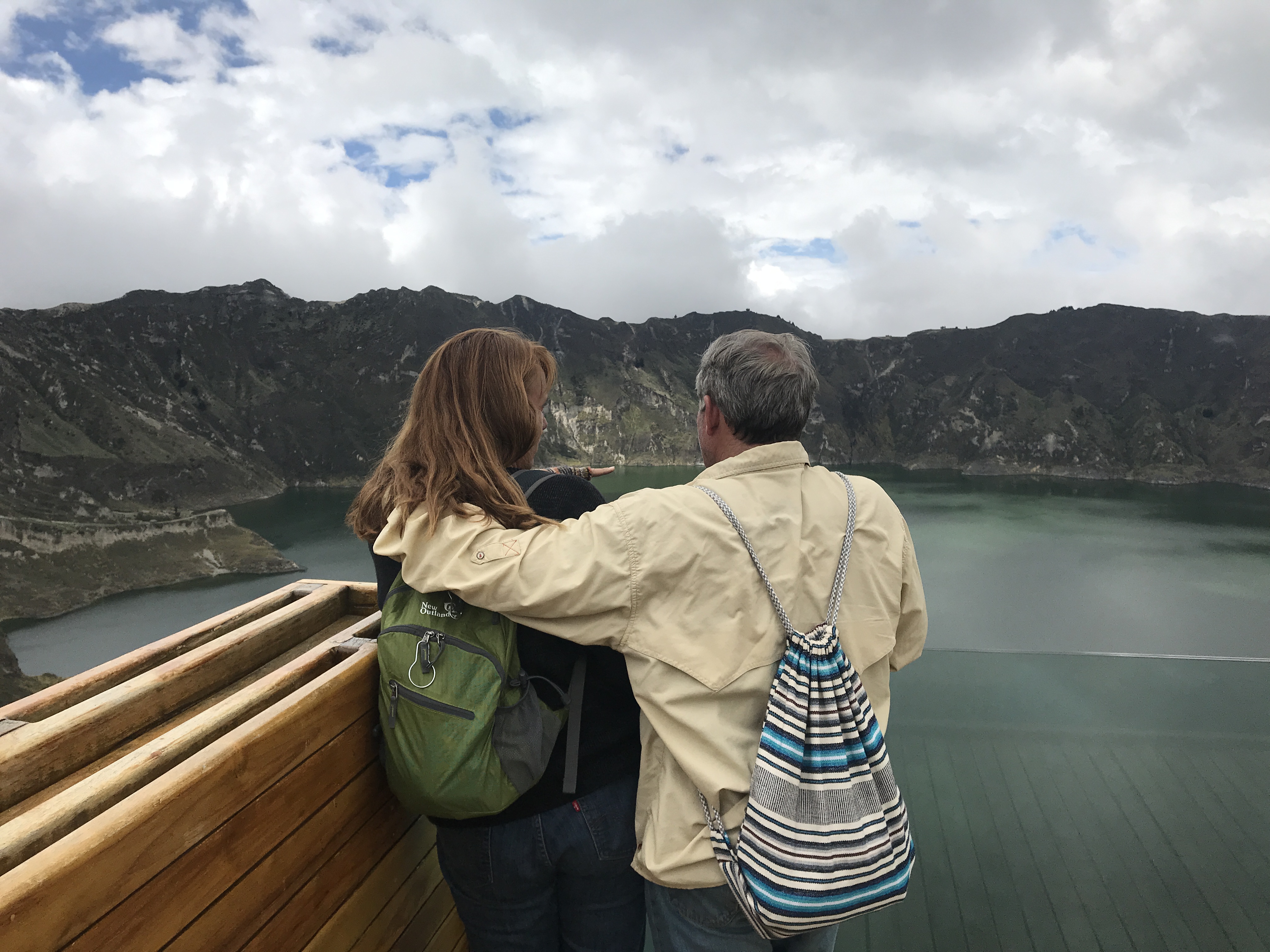 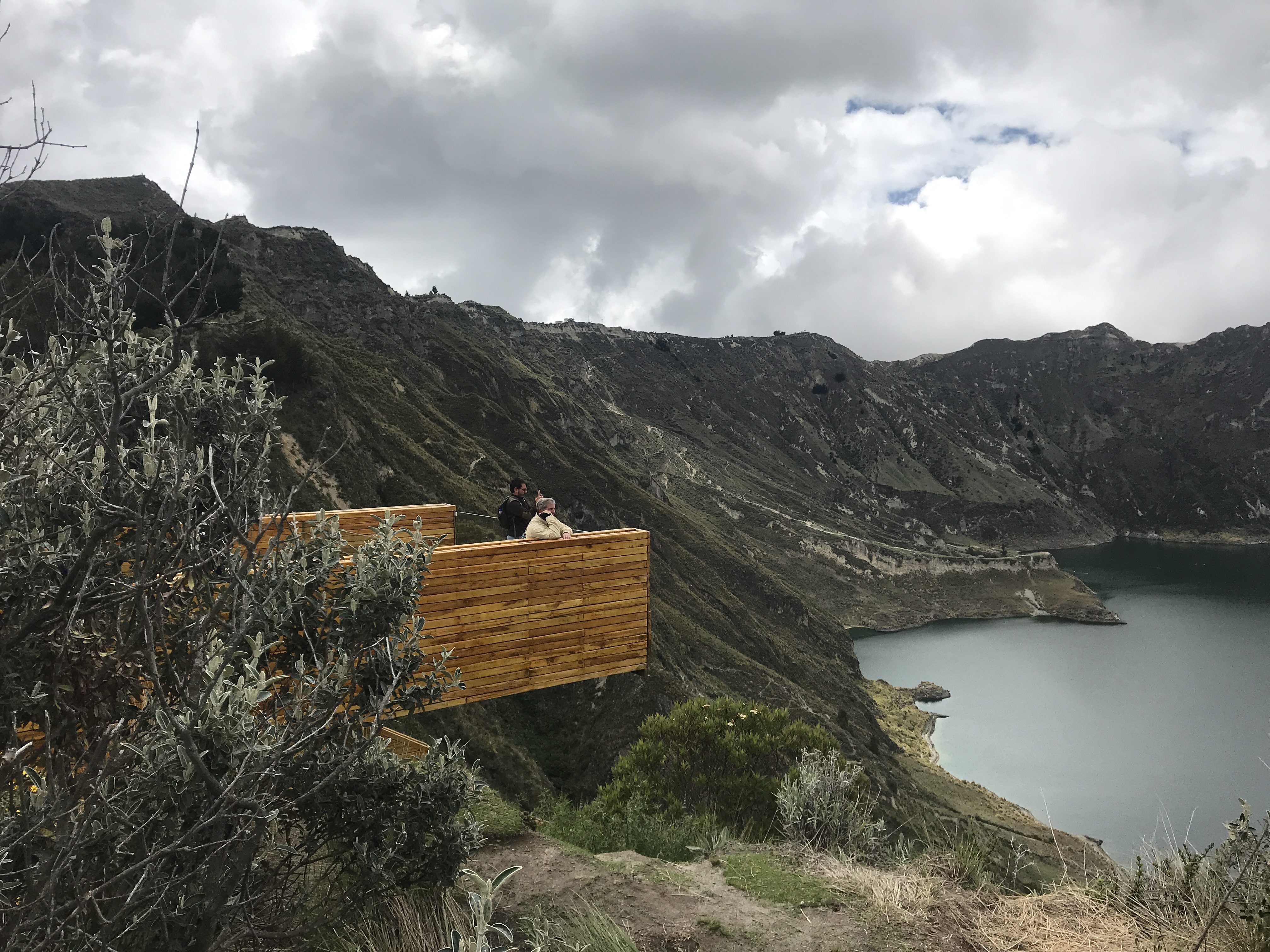 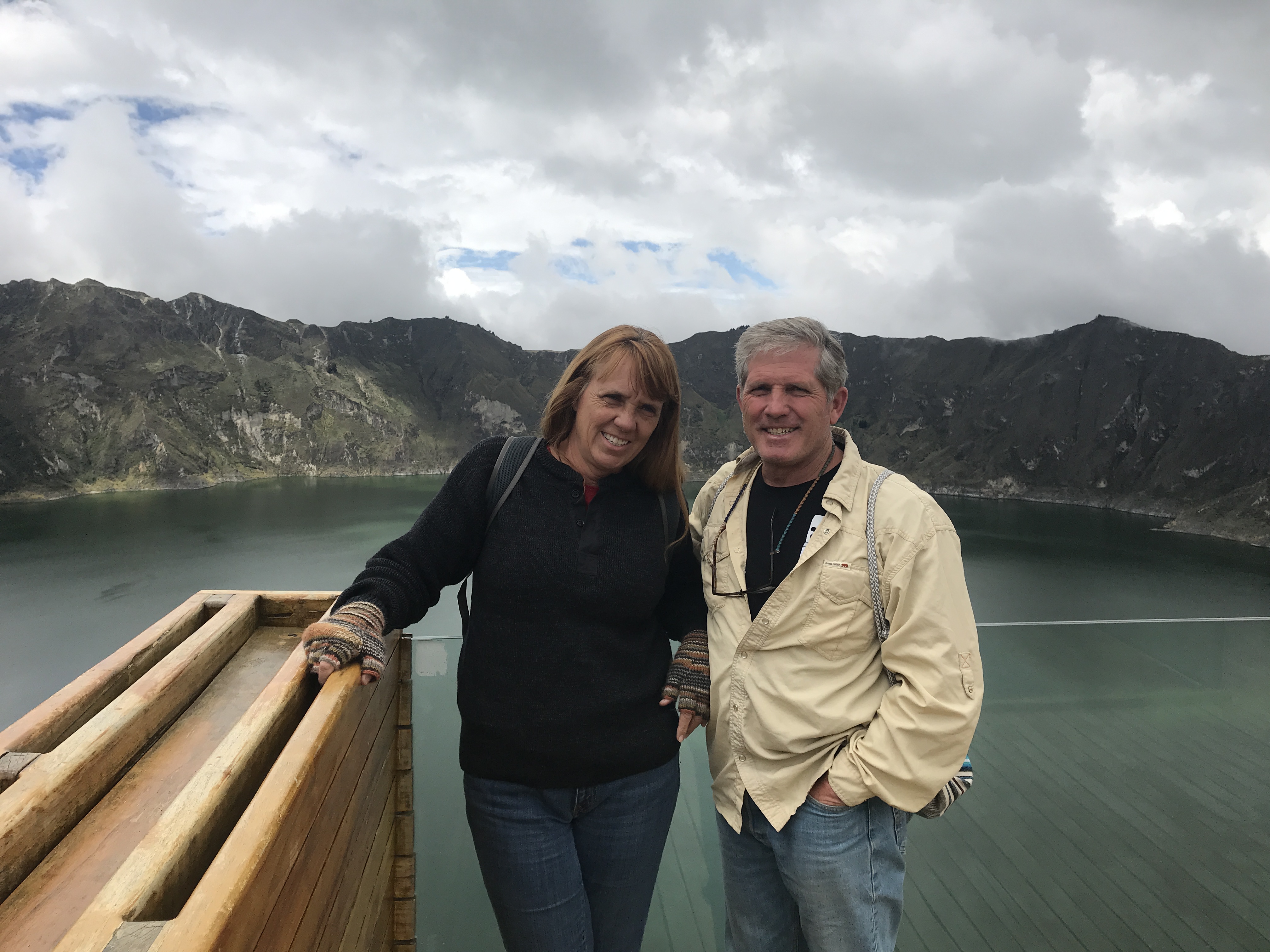 Much of this area has seen the flight of the native people. Families have chosen to move to larger cities to find profitable work and better schools.  Young adults have abandoned the native practices and native language. Traditions are disappearing quickly.  Many of the remaining homes look like this. 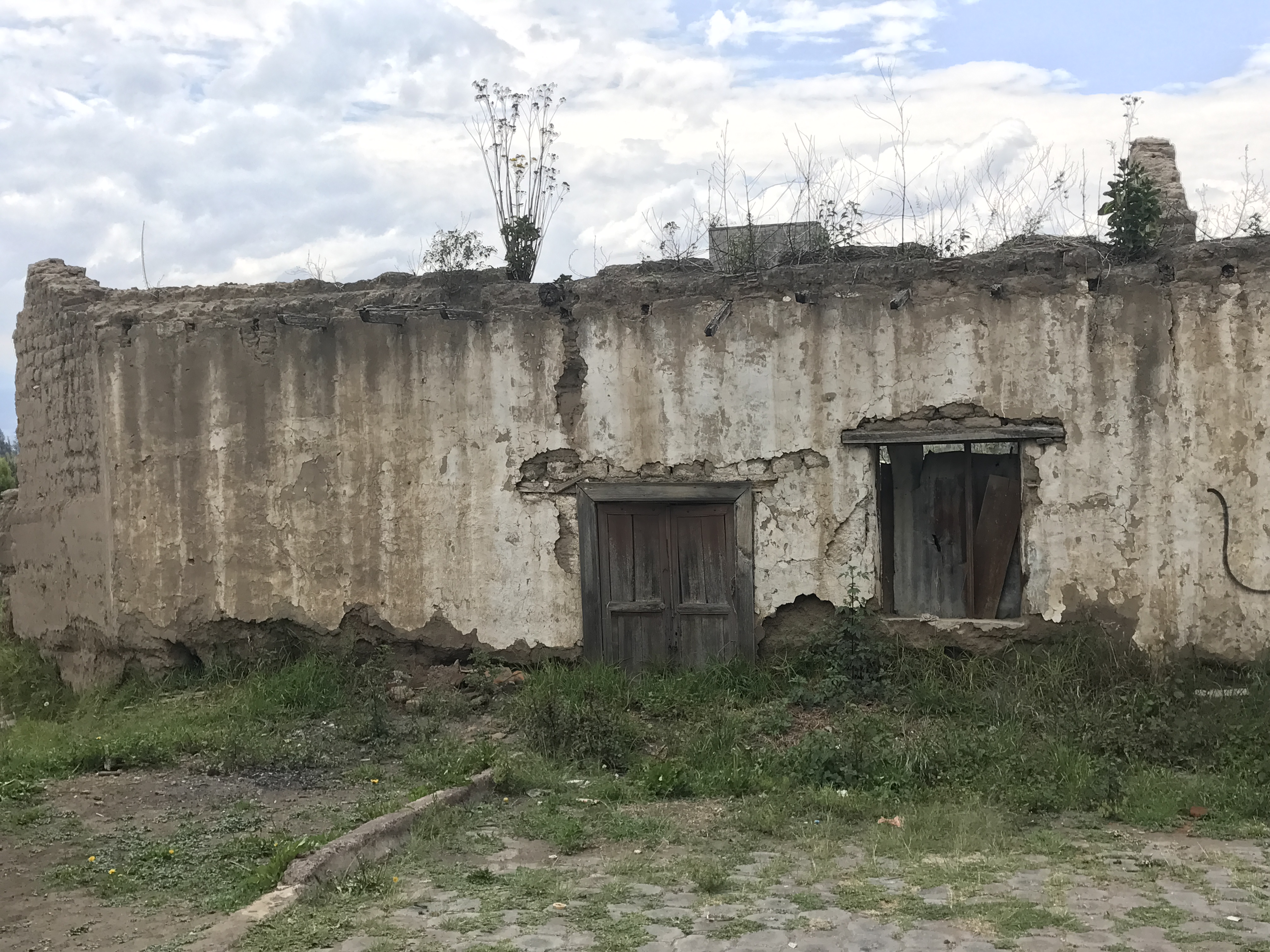 And although we really enjoyed our time in the Quilotoa area, there is still much more of Ecuador to explore.   Stay with us as we share a few more stops in the wonderful country of Ecuador.