We completed the border crossing much more rapidly than anticipated.  This gave us time to explore the town of Tulcan.  There we found a beautiful cemetery and monument garden.  This beautiful location covers at least 3 acres and is treated like a city park by the visitors.  Picnics, family photos and lovers strolling were typical.

The gigantic topiaries are impressive at 10 to 20 feet tall.  They interconnect to become hedges and fences along the walkways.  And they divide off private areas.

Along the outer walls, and bisecting the walkways inside are huge walls of crypts.  These crypts are purchased, personalized and maintained by family members.

Our next stop in Tulcan provided an introduction to the archeological history of Ecuador.  This small museum offered an outstanding collection of pottery from the ancients.  Most of these items are from Kichwa people of the past, who are still a powerful population group.  Mike and I observed that the language, the family names and even some of the pottery art looked very similar to Hopi.  What do you think?

Next we decided to do a little bit of exploring.  We saw some hot springs marked on a map, and thought we would go have a look.  The road paralleled the Colombian border and several times we could spot the white border line markers in the distance.  (simply a stack of rocks painted white or a 4 foot concrete pillar) The scenery was breathtaking and vast.  An entire forest of frailejons lay before us.

While driving through here we encountered our first roaming llama.  They are commonly kept as pack animals, pets and even a food source.  But generally they are unfenced and roaming free.  These were.

And the hot springs proved to be amazing.  Hot water, concrete pools, kind people and scenery that kept us entertained.  We were at the base of Volcano Chile.  And the water came right from that source.

In the parking lot we were interviewed by a Kichwa reporter, who wanted to do a story about what attracts travelers to this area.  Once again we had to improvise in Spanish and pull of a television interview.

We drove through the volcanic fields and began to drop in elevation into a cloud forest type setting.  We set up camp for the night on the side of the dirt road.  And when we awoke in the morning we were surprised to see that the spot we had chosen was above the clouds. 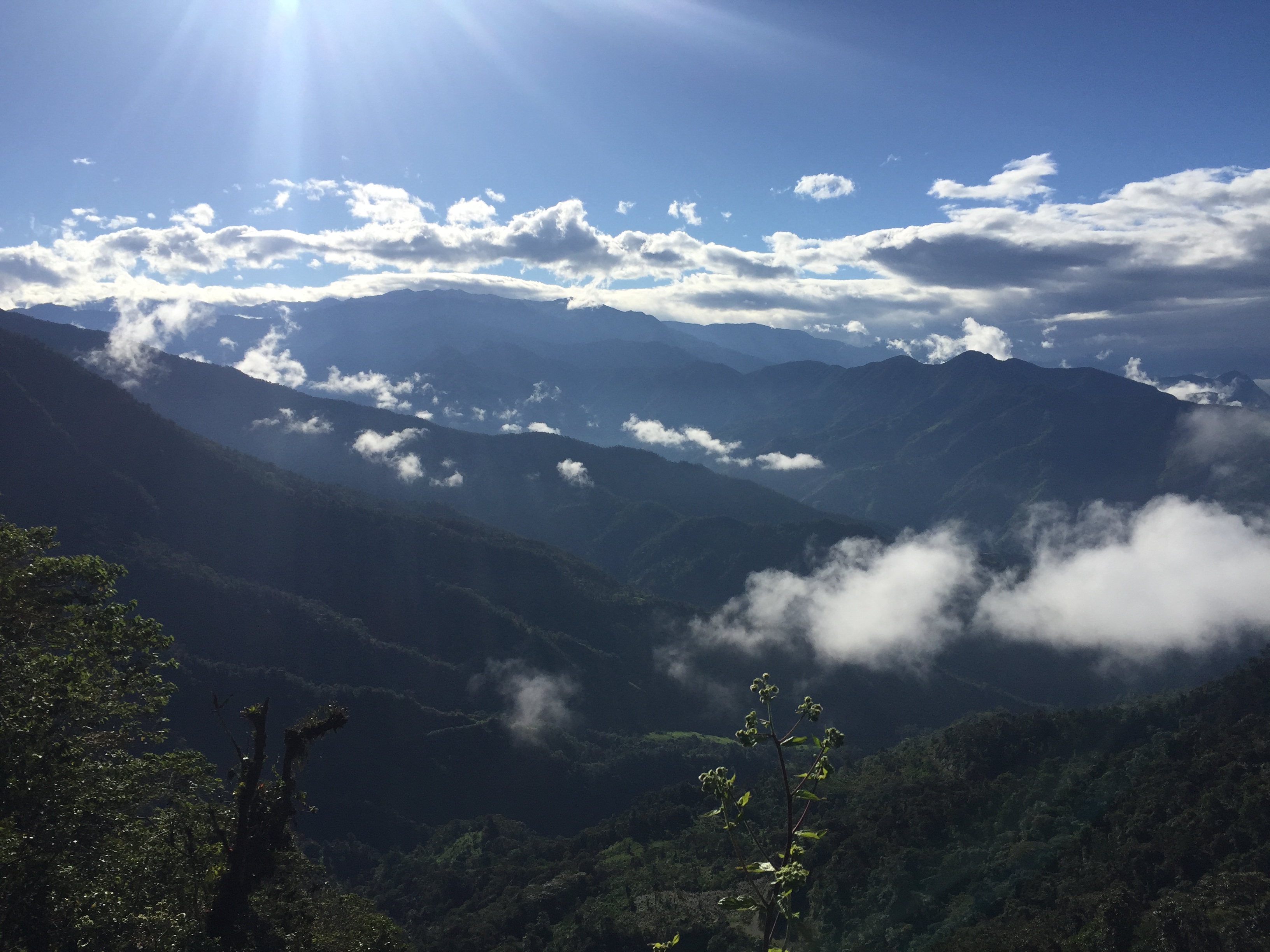 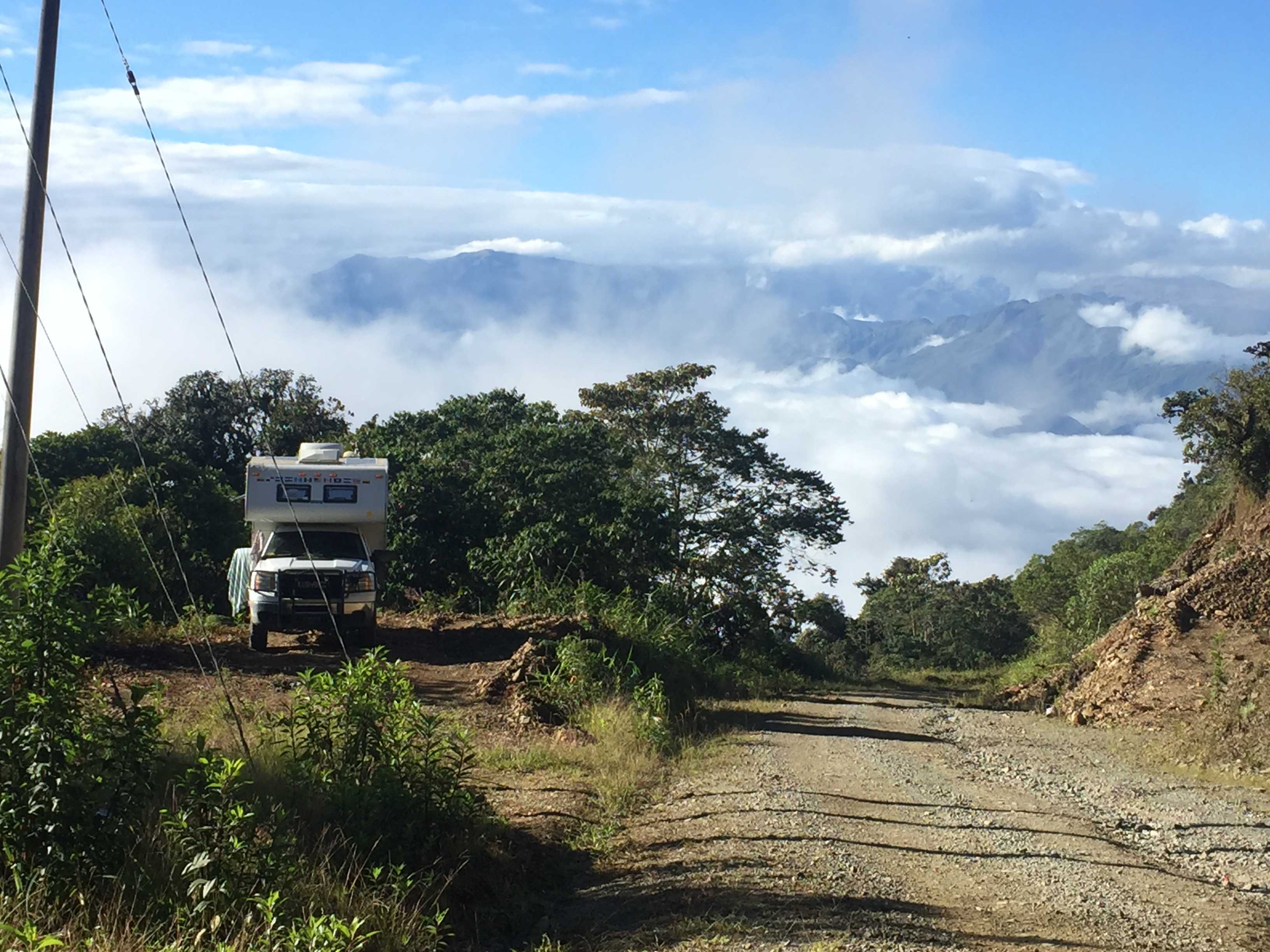 But even when we are camped on the side of the road, overlooking a cloud forest, we eat well.  Here are some photos of the breakfast Geneva whipped up.  It includes eggs in the center of home-baked bread, topped with cheese and diced salami.  On the side is sliced bananas and fresh cherries!

After breakfast we started driving down the dirt road, dropping in elevation and rising in temperature.  After a few miles (kilometers) we encountered a military convoy led by a very large truck.  They blocked the road and approached the truck to talk to us.

After a few minutes it became apparent that they had no idea what to do with these English-speaking tourists in the odd looking camper.  But they were very curious.  So four of them went in the back with Mike to have a look around.  Of course it was a mess from the bumpy road and clearly not filled with contraband.  So they waved us on and continued down the road.  As did we.

We finally left the bumpy dirt road and entered a small village.  Immediately we heard a hissing sound from our back tire.  It was a leaking valve stem.  But within moments we had located a tire store, fruit stand and money exchange stop.  The valve stem was replaced quickly and for about $4.00. 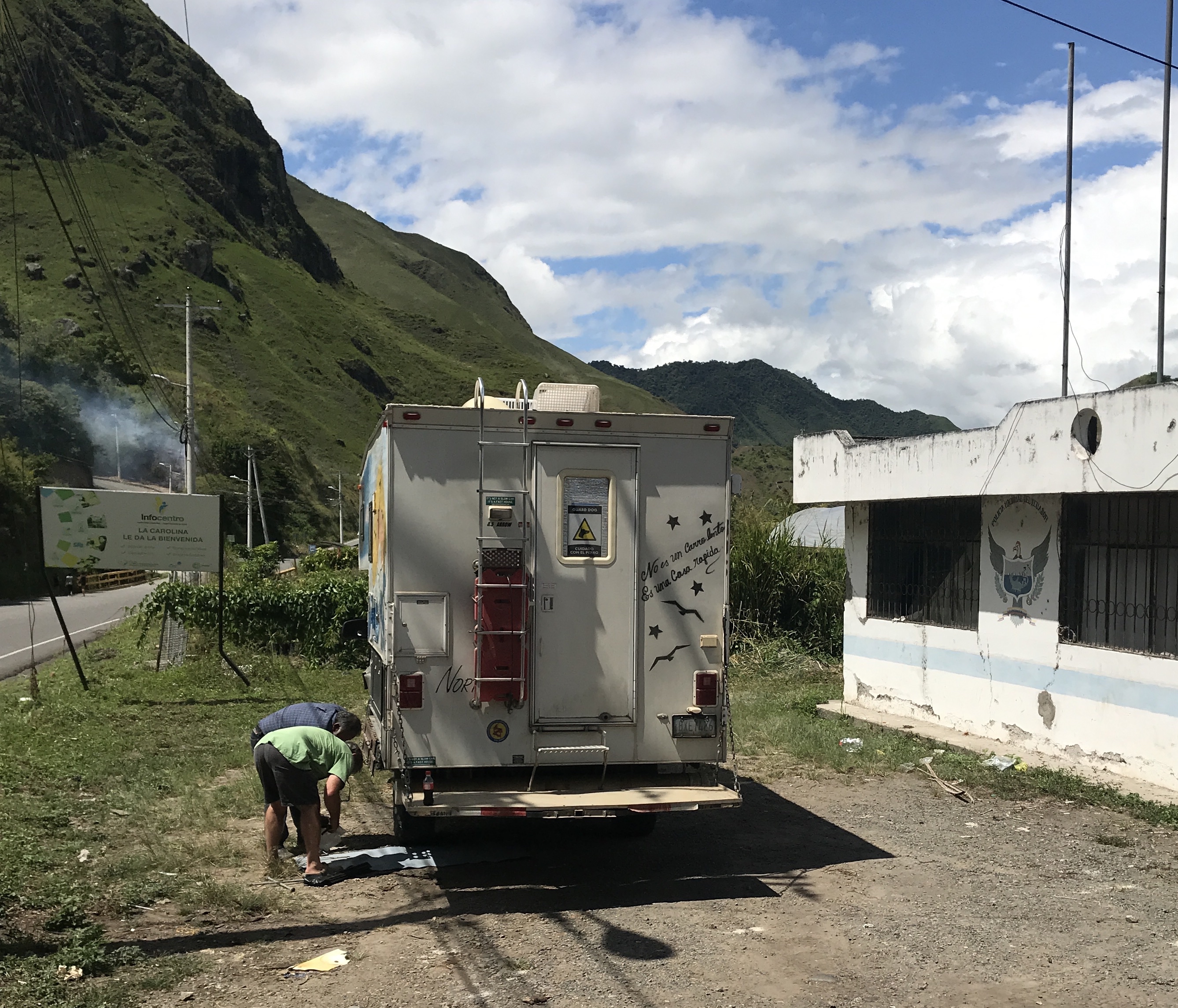 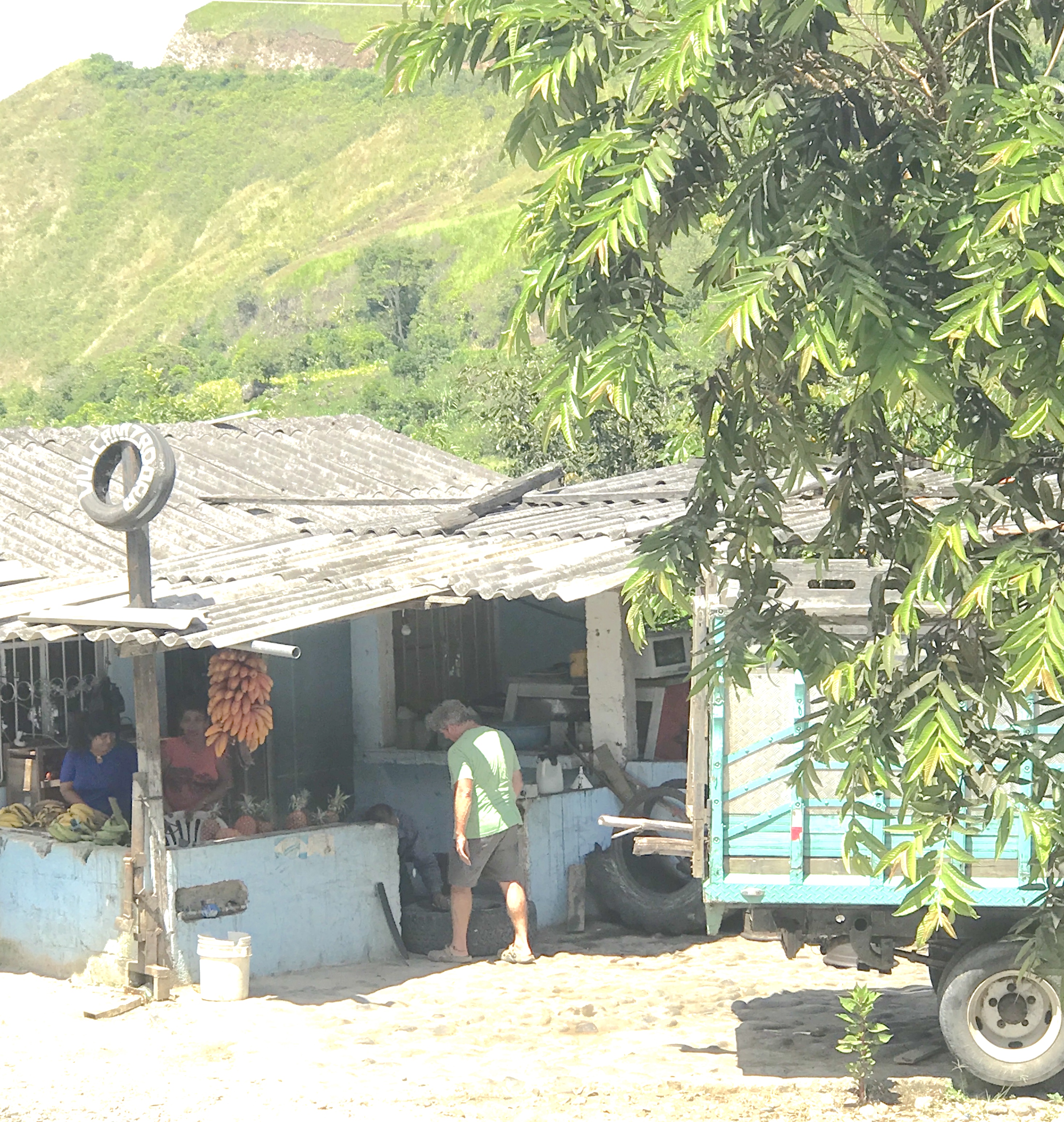 And now we were out on the main highway, and pointed towards our first Ecuadorian ocean village.  We were going to San Lorenzo.  We found it to be a very busy city, as a hub for sending products by boat to many small island communities in the area.

It was almost New Years Eve so we decided to drive to an overlander gathering place named Finca Somerwind.  There we were reunited with traveling friends, met new friends and relaxed for several days. 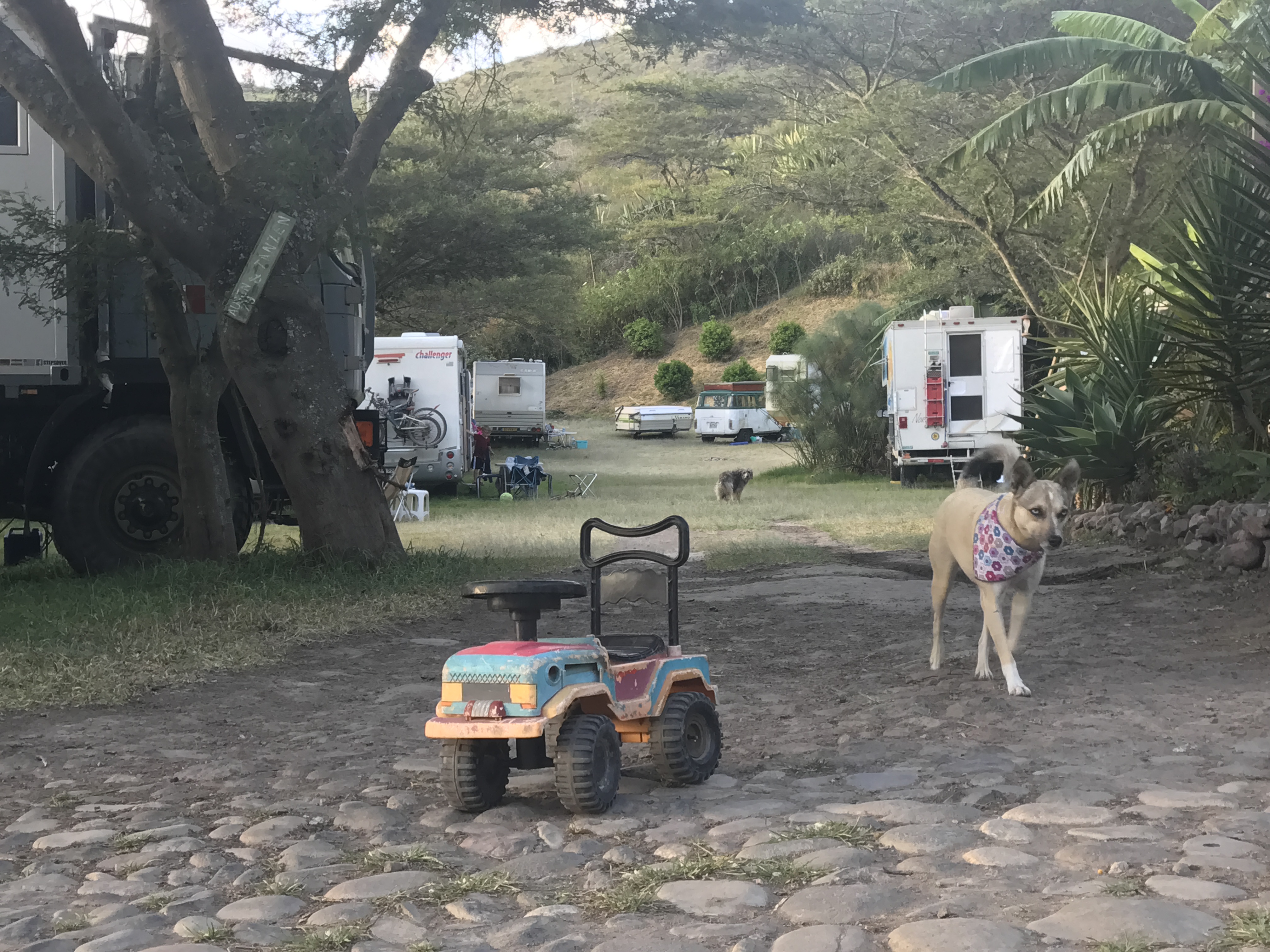 The highlight of our stay was a gathering of all the travelers and also many local friends.  We shared a huge potluck dinner with a wide variety of delicious dishes.  And in keeping with the Ecuadorian tradition, at midnight they burned an effigy of a politician.

Mike took a hike to the top of the hill and captured this great image of the nearby racetrack, the lake and the camping area.  As you can see the plants and soil look very much like the Arizona desert.  We felt the dryness as we stayed there for about a week. 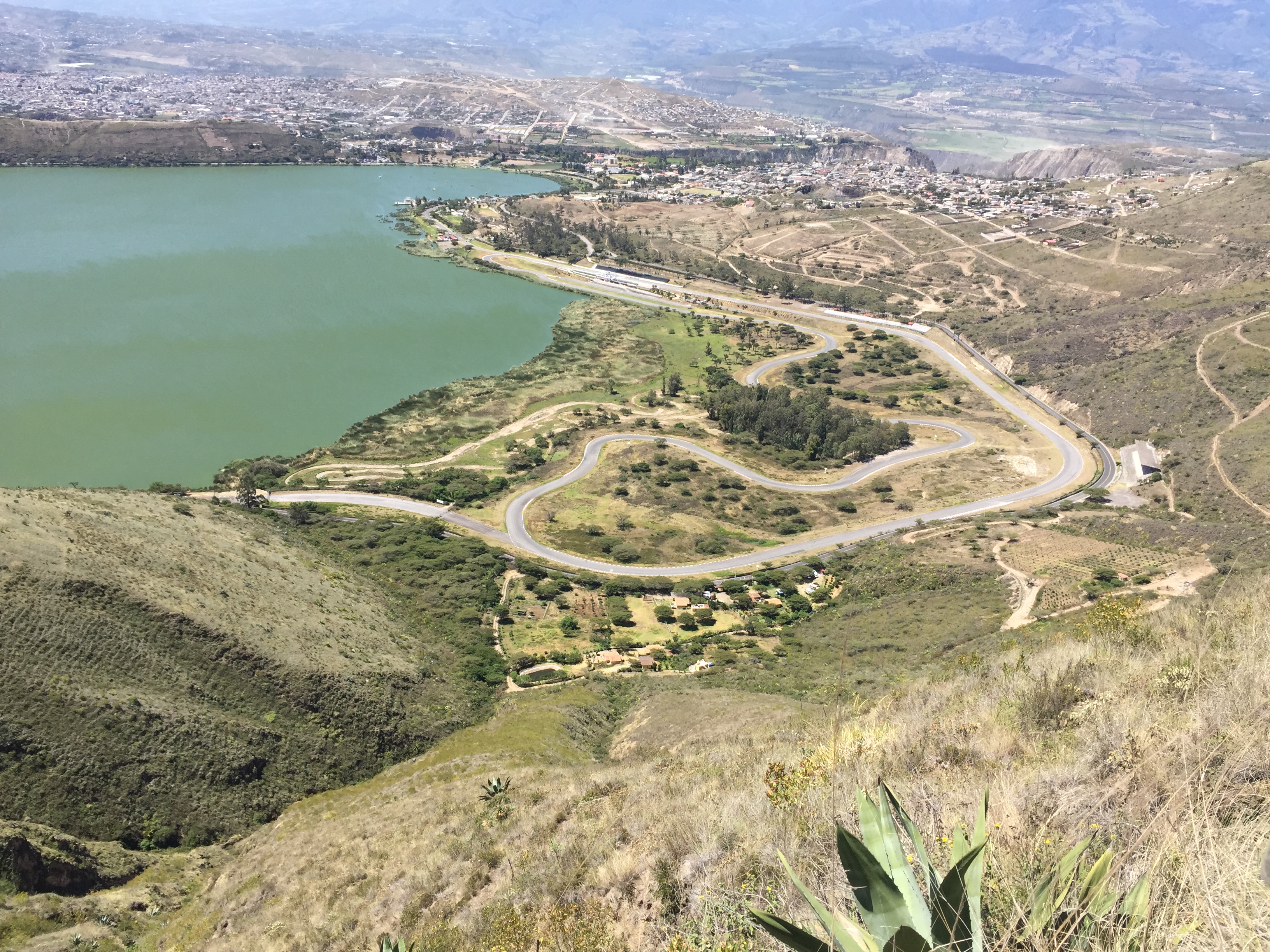 Nica posed in her fancy bowtie for her New Years portrait.

We did laundry and went grocery shopping in the nearby city of Ibarra.  There we saw a large city park which was being used for soccer practice.  There is nothing quite as giggle-worthy as a gaggle of youngsters chasing a soccer ball, in any country! 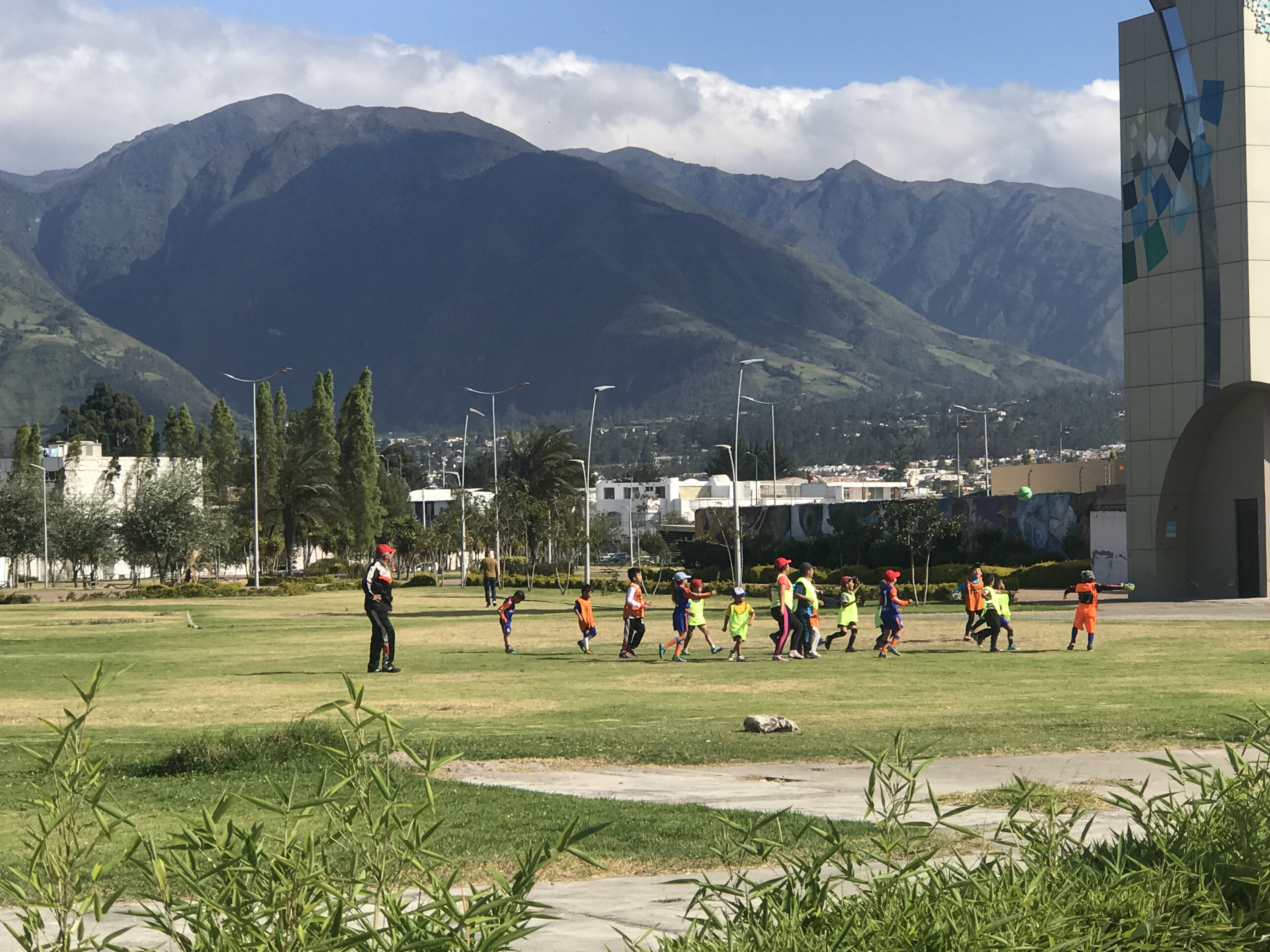 After the new year began, the travelers went their separate ways.   We decided to go into some nearby mountains to see Grutas Las Lajas.  This beautiful cave contains an open air chapel.  And flowing beside the chapel is a beautiful cold river and a natural hot spring.  The cold river roars past in a deep channel and pours down the mountain.  The hot springs are funneled into concrete pools and tubs to be enjoyed by guests. And above the cave is convent of nuns that operate a small restaurant and store.

We camped in the large parking lot, near some travelers we had met back in Costa Rica.  We spent two chilly nights at this beautiful location, and enjoyed relaxing in the hot water.

On our way out of Las Lajas we had to pass along a narrow cobblestone road.  Then we encountered a small, dirt tunnel.  We found it entertaining, and we thought you might also.  Here is the dirt tunnel and video.

And we will close our description of the north of Ecuador with this fun photo.  This person needed to get home with some very long pieces of steel.  The steel is tied to the top of the truck and then tied to a small set of wheels.  It seemed to work perfectly as the truck wound through the mountain passes ahead of us!

We will keep rolling along through Ecuador.  Watch this blog/web page for more photos and stories as we explore the center of the world!  Remember, the equator still lies ahead of us. See you soon.

4 thoughts on “Ecuador- exploring the North”