After our journey through the mountains we crossed back in to Bogota one last time.

On our way into the capital (Bogota) we met a man who repairs and sells campers and RV’s. He and his crew were very interested in the details of the construction of our rig. I think there will be a similar unit in Colombia before too long. 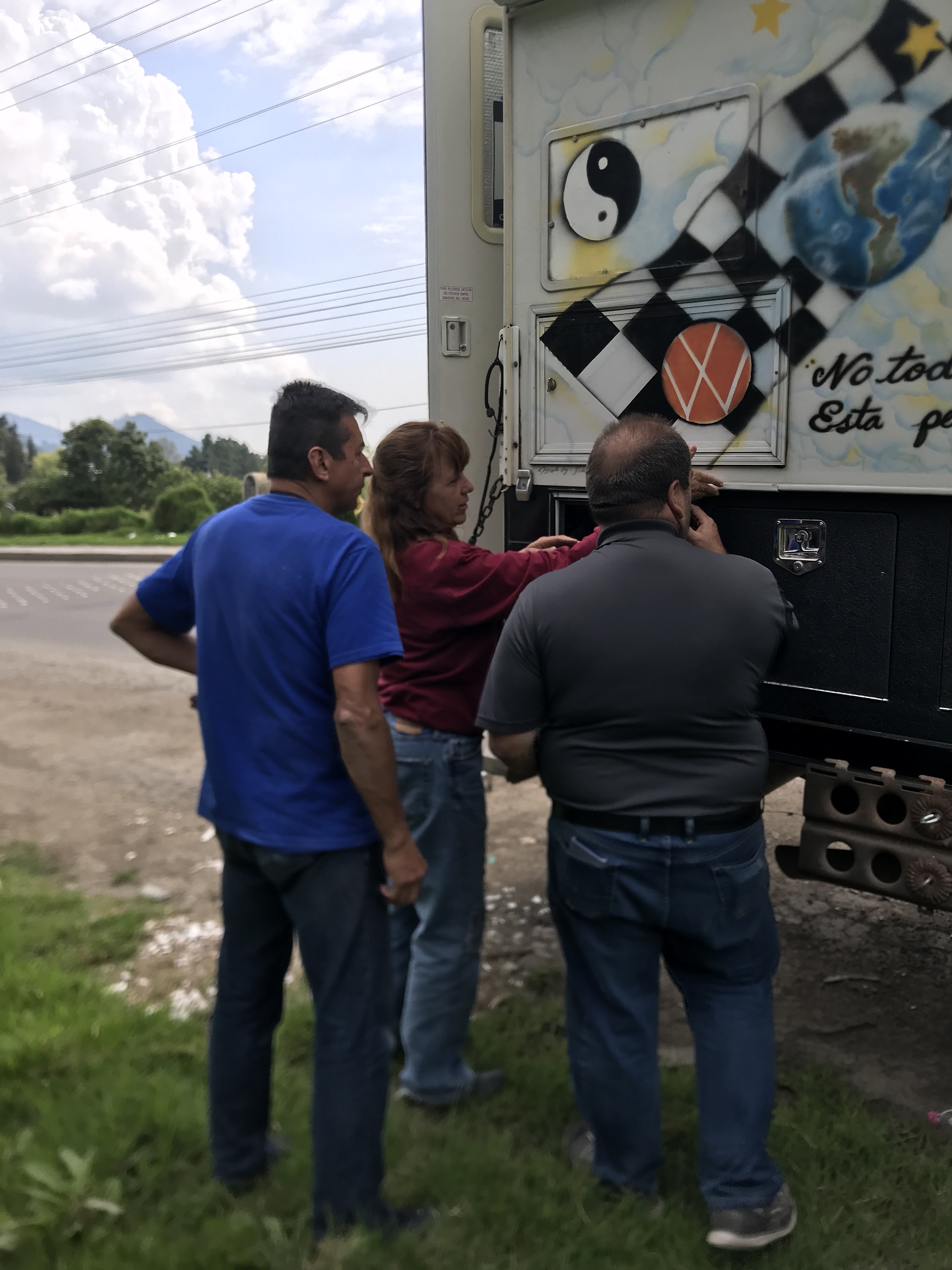 Our real reason for passing through Bogota was to replace those tires that were wearing thin. We got a great price and had great service at this 4×4 shop 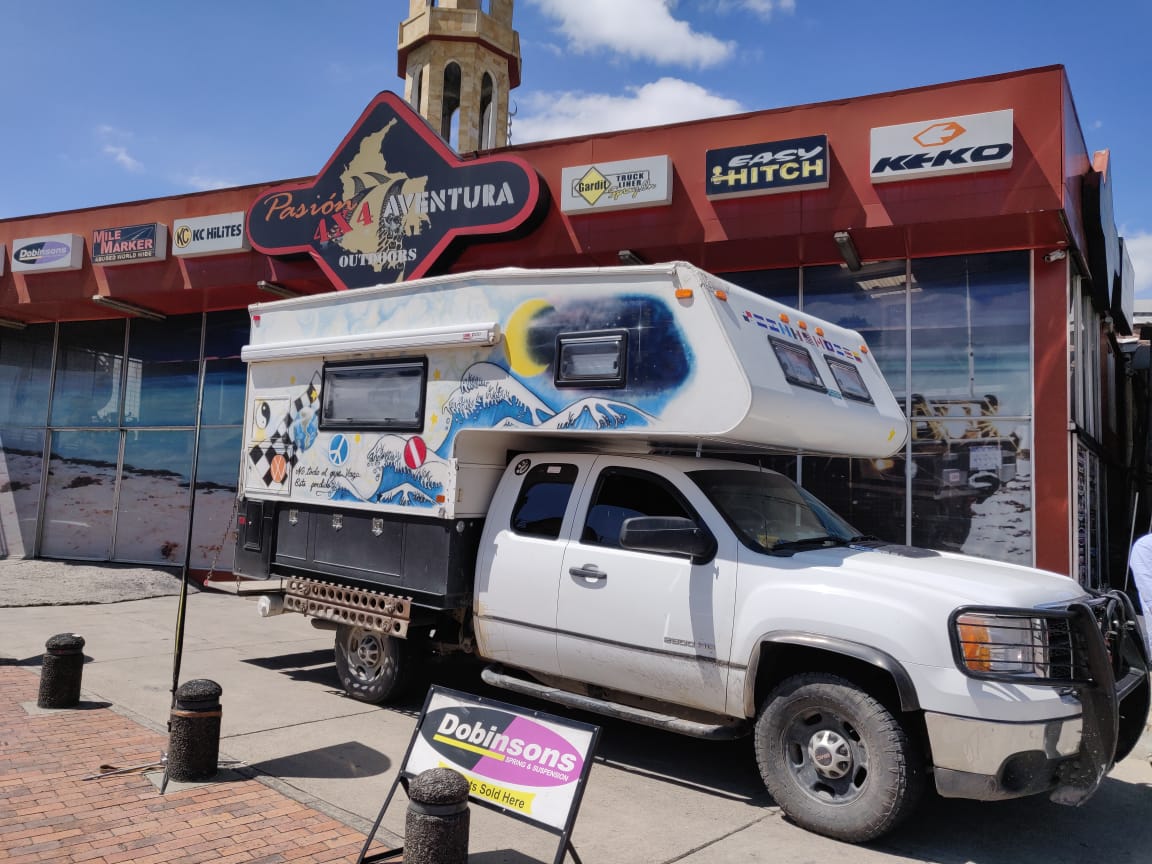 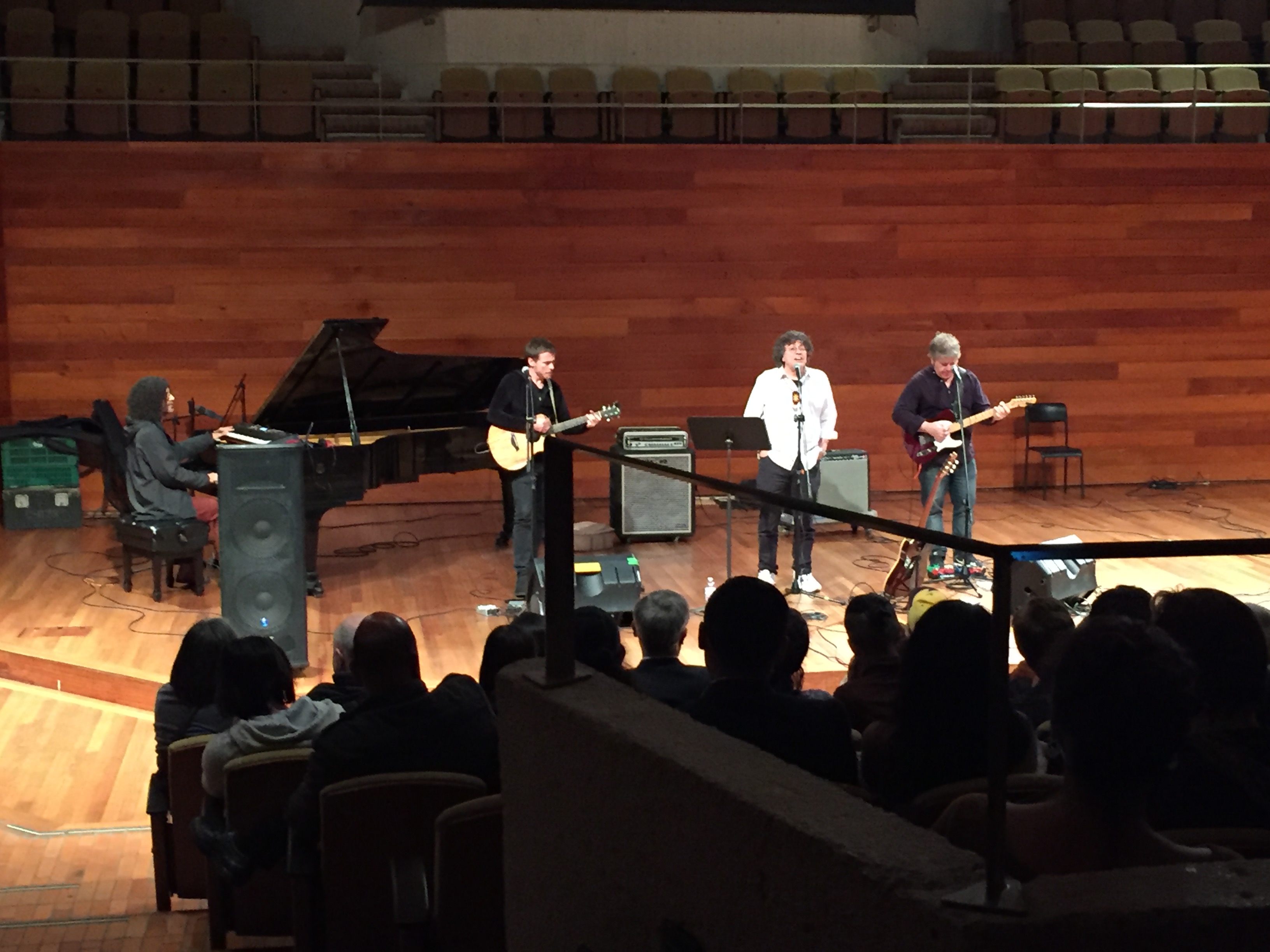 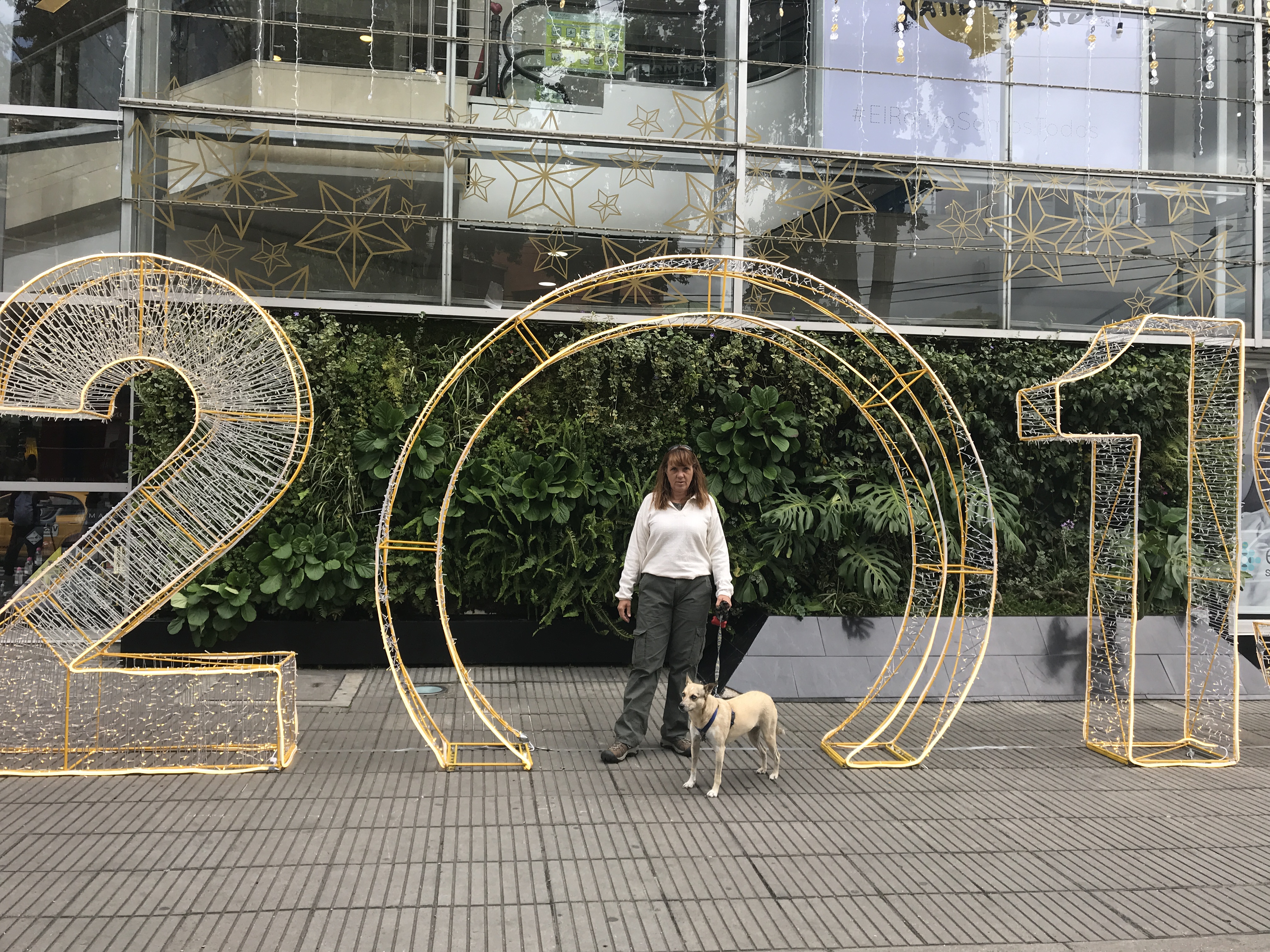 But the highlight of our last visit to Bogota was spending some pre-holiday time with our special family in this city.

We also enjoyed some city walks with Nica

and placed some googly eyes 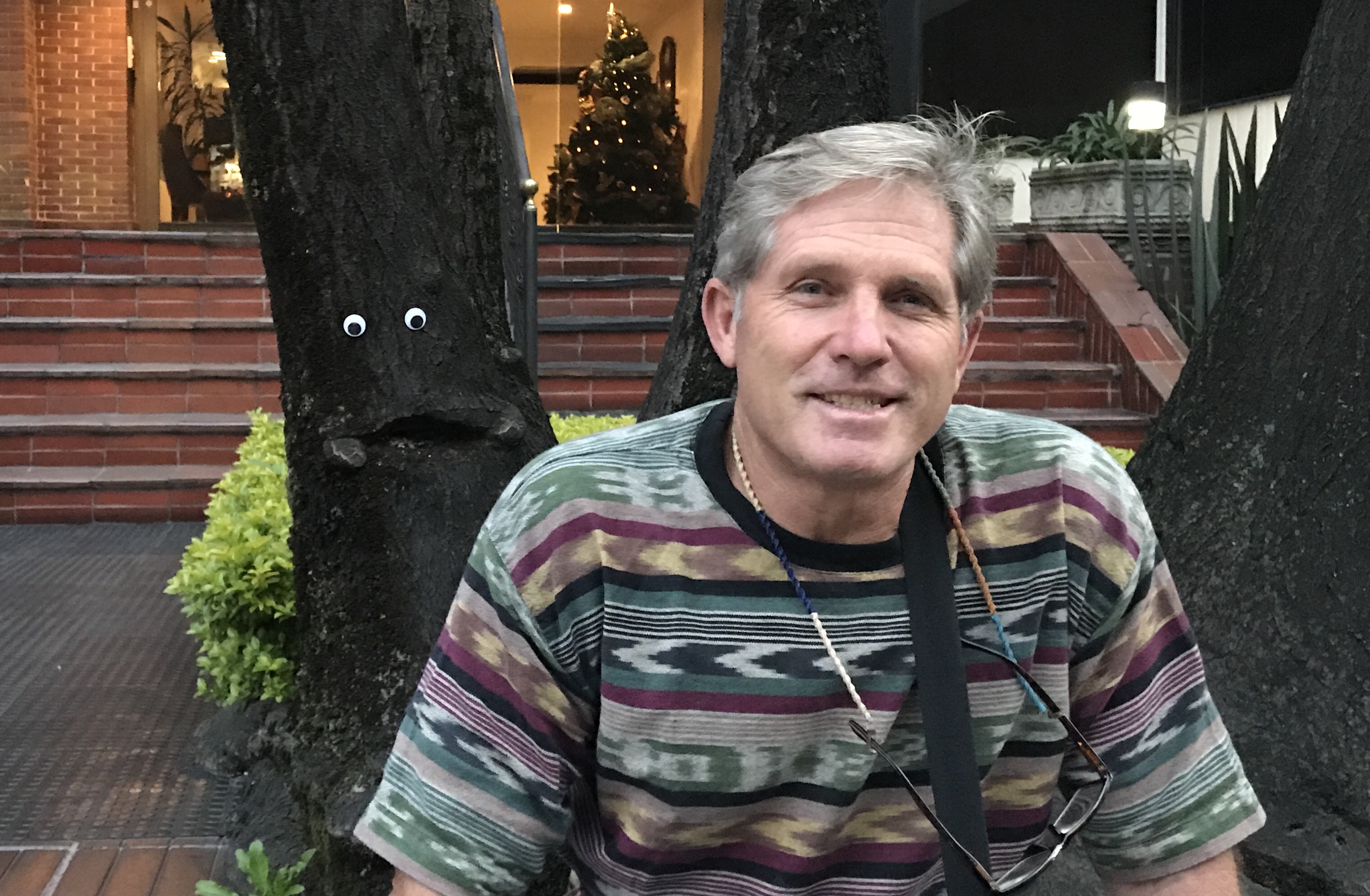 Then we said our goodbyes and turned toward the Southern border of Colombia.

Somewhere after leaving Bogota we saw a man on the side of the road with a bloody face. There was a truck (that had just passed us) and a motorcycle parked there. We stopped to see if we could help. The police pulled up at the same time and walked into the bushes. We were confused by the situation, but first aid was our first concern. We gave the man a bucket of water to clean off the blood and then Geneva focused on stopping the bleeding. He had two deep wounds on his scalp. Once cleaned, they clotted well and we could discuss what had happened.  It turned out that he was riding by on his motorcycle when a person on the side of the road waved him down. He stopped to see what they needed and removed his helmet to talk to them. Suddenly two men jumped from the bushes and hit him on the head, when he fell; they demanded his wallet, money and cell phone. Then hit him again and ran back into the sugar cane fields. Once we realized this was a crime scene, we knew we needed to get going. So Geneva handed him more paper towels to hold on the wounds, and pushed a 50-peso bill (about $15) into his hand and we left. This is the only photo we captured. 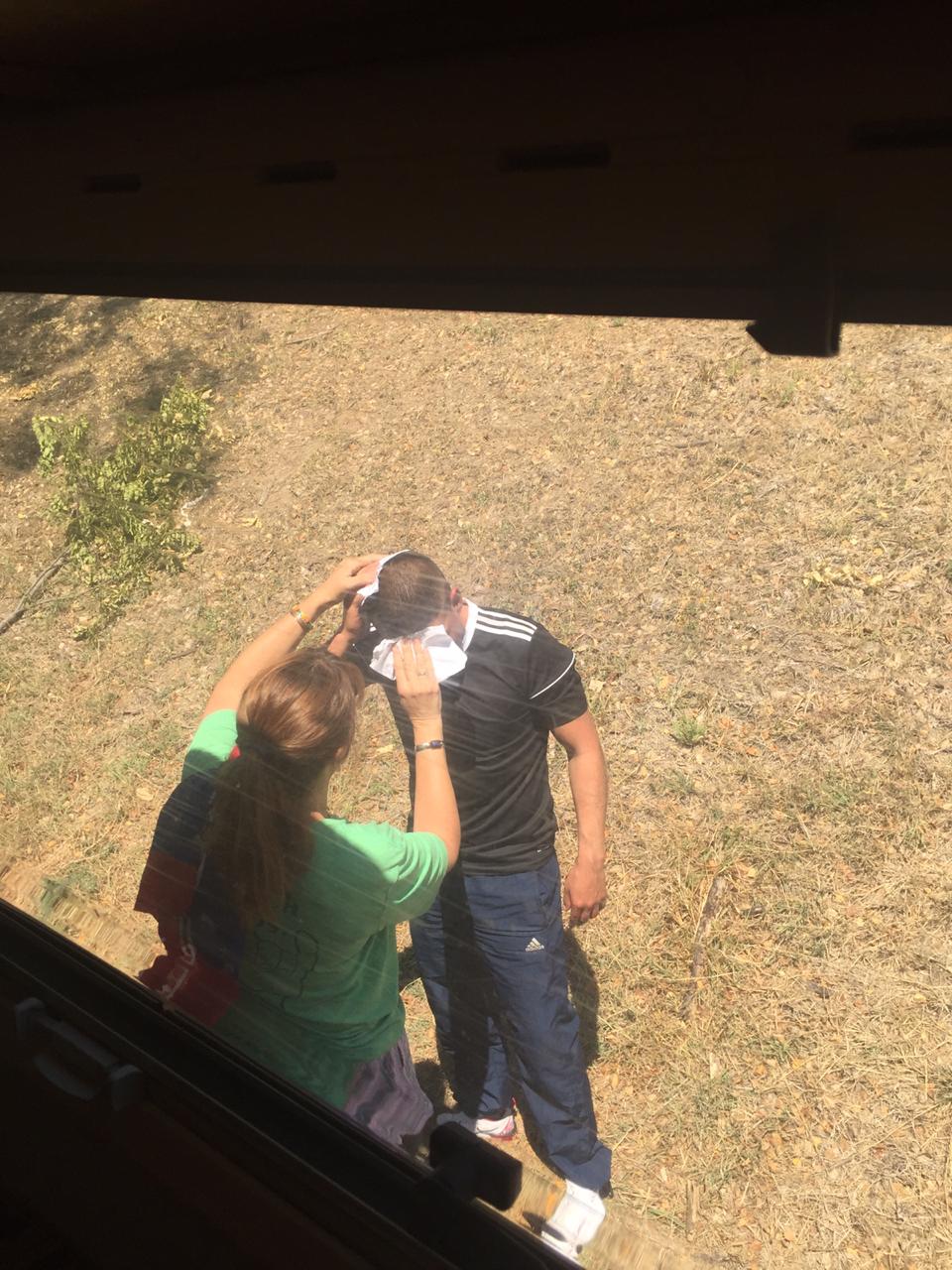 Near Cali, Colombia we veered toward the airport to discover a museum. The Fenix Air Museum (yes, spelled like that) had a few write-ups and looked like a fun stop. You can read about it if you click here (it will open a new window) www.museoaerofenix.org   It did not disappoint. The first thing we saw was the most extensive collection of airline flat ware in the entire world. The collection covered nearly every wall of the huge hangar.  While it wasn’t an exciting display, it was impressive.

We also saw full-sized and model-sized airplanes on display. Many old airlines staff uniforms, a beautiful set of 1937 Buicks (one of each model produced that year).

There was also a precisely detailed model train that filled an entire room. It represented a train trip from Pennsylvania to Illinois in 1937. The depiction of towns, sawmills, mountains and cities was astounding. And the men in the workshop seemed to be constructing new parts to add on to the display.

Our goal was to be across the border before the New Year. It has to do with travel permits, maximum days in a country and such. This left us driving for Christmas Eve and Christmas. For Christmas Eve we enjoyed our own special gift exchange in a quiet corner of a gas station parking lot. 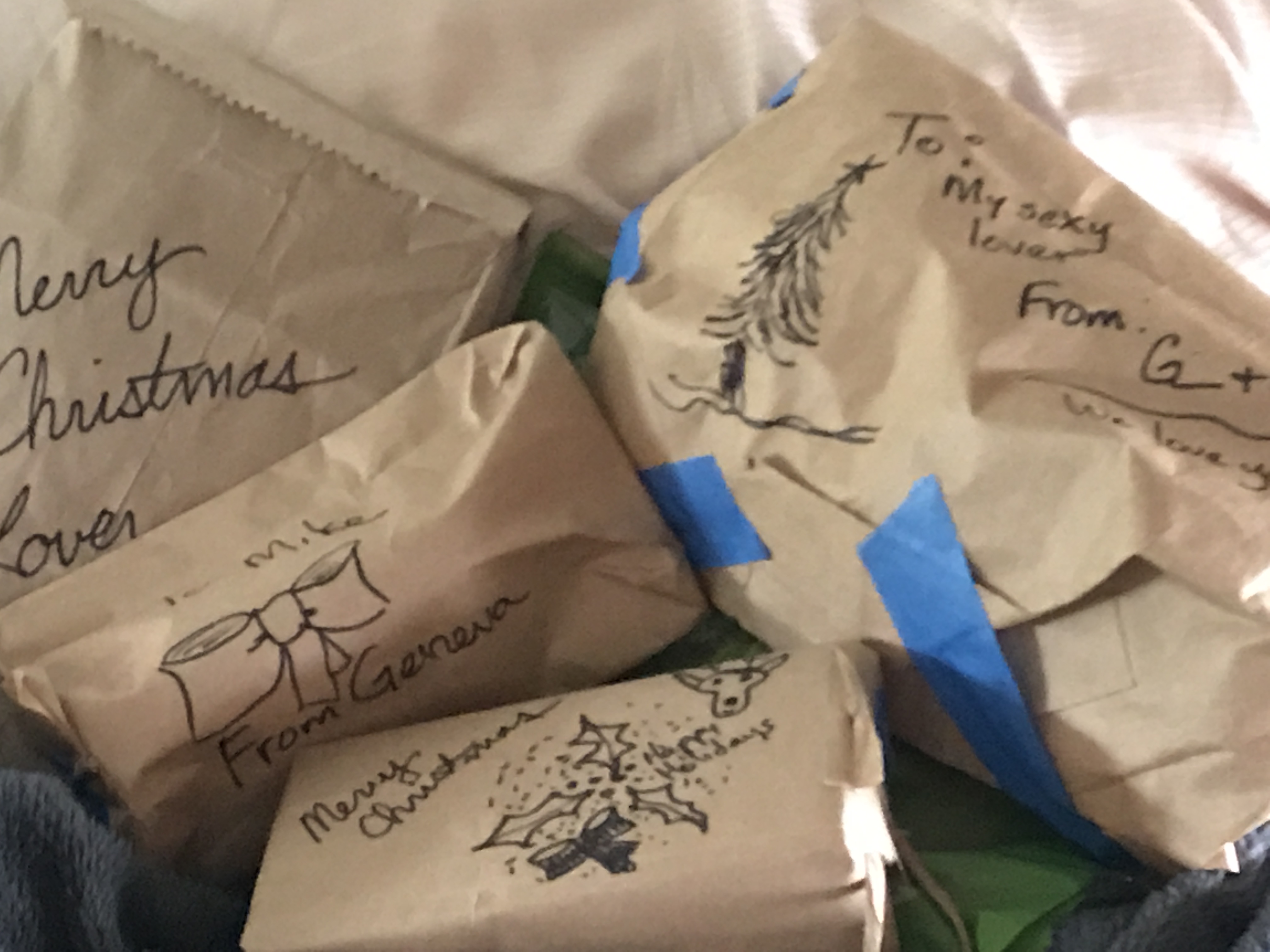 Then on Christmas morning we spent a few hours rescuing a kitten from a pile of construction rubble. If you have Instagram or Facebook you can see more about this story on our pages. Find us @itsnotaslowcaritsafasthouse   Click here to open a link to the Instagram story.

After the Christmas kitten rescue we continued our trek to the Ecuadorian border. In the afternoon we arrived at the Las Lajas teleferico (gondola) parking area. They welcome travelers to park there and even keep clean bathrooms open overnight! In the morning we jumped on the teleferico with Nica (yes, dogs are welcome) and rode across the canyon to Las Lajas chapel. This special place has an interesting religious history, which you can read about if you click here (www.atlasobscura.com****** ) 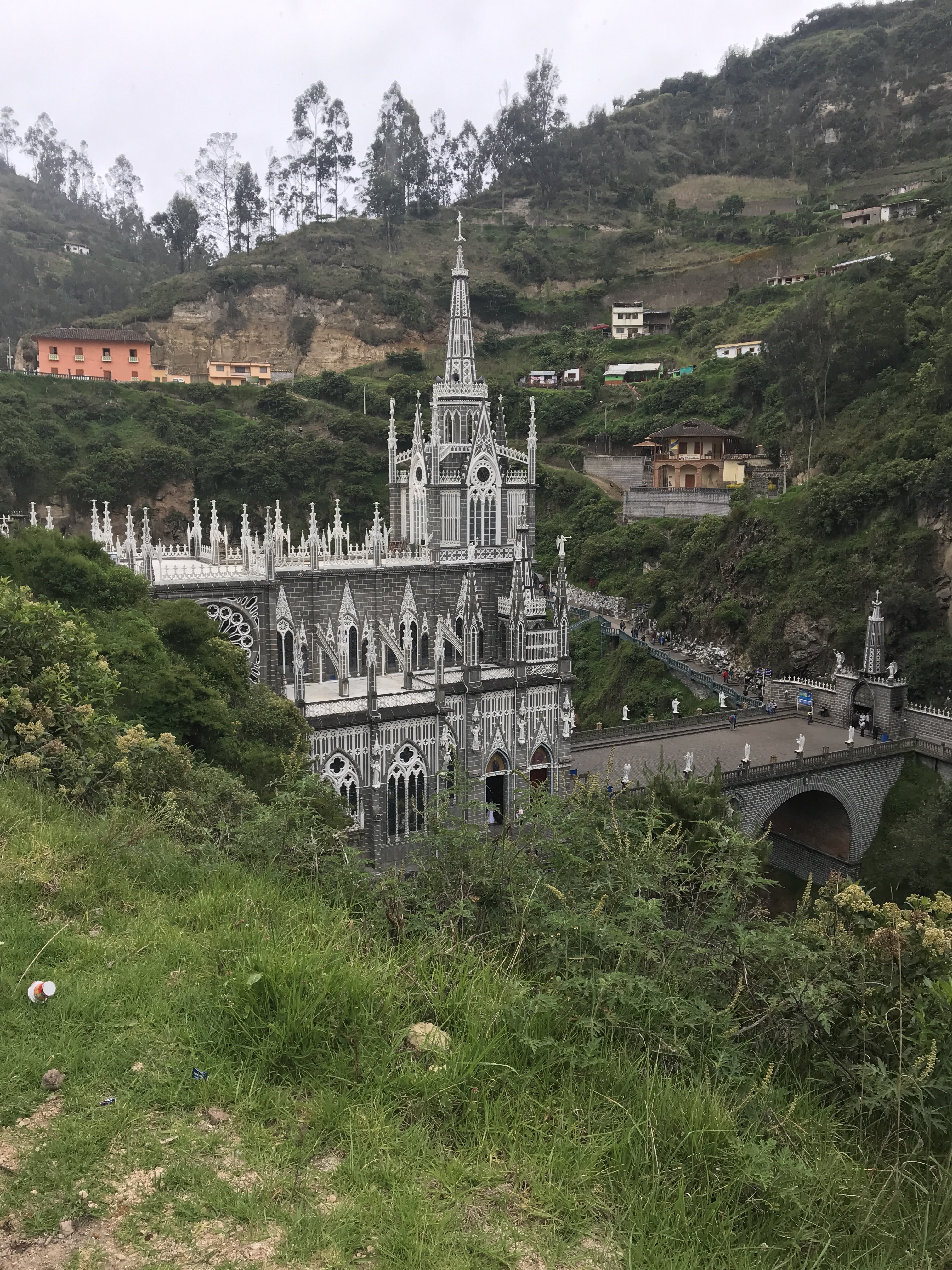 The first glimpse of the chapel was breathtaking. When we approached the chapel grounds we were told that pets were not allowed. I waved my hands and pointed out the 6+ dogs wandering around already. The woman stated that they were just callejeros (wandering street dogs). This conversation was in Spanish.  They let us bring her on the teleferico (gondola), and said nothing about rules at the end of the ride.  Now I was irritated, it was raining and I had paid my admission fees. About that moment we spotted a man who was trying to figure out how to get his wheelchair-bound mother down the seven flights of stairs in the pelting rain. Using this distraction, I reached down and removed Nica’s harness and collar and walked over to hold my umbrella over the old woman. Mike took half the chair, and the man grabbed the other half and we started our procession down the steps to the chapel grounds. Nica had faded into the crowd of feet around us. She is an excellent street dog, always watching our location and yet checking for trash, sniffing corners and looking hungry! 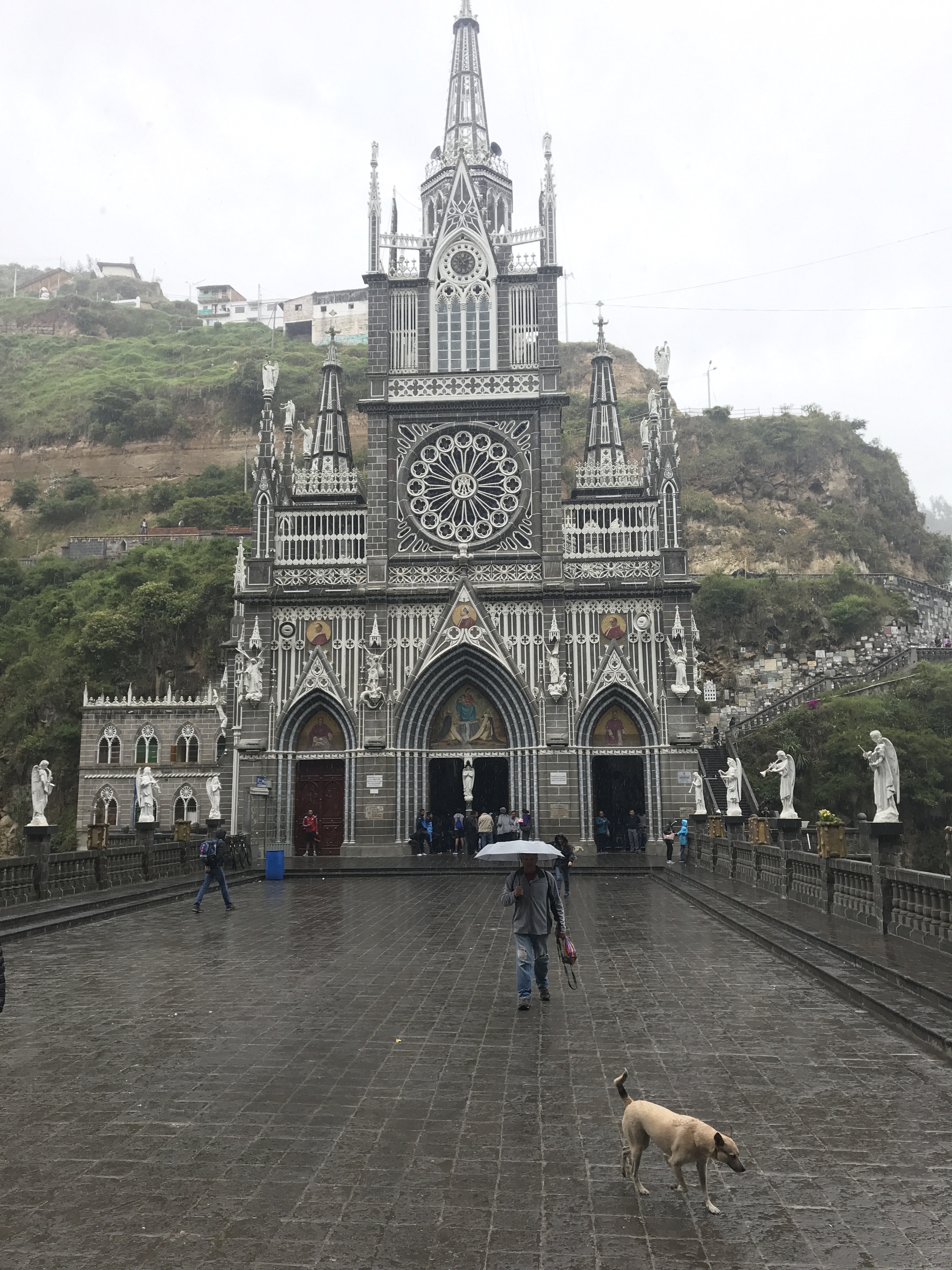 When we were done exploring the grounds, Nica was on our heels to go back up the stairs and get aboard the gondola cable cars. Her day as a street dog was done.  We returned to the truck to prepare for the border crossing the next morning.

Of course, no summary of Colombia would be complete without a few highway images. Here is a man in traditional indigenous dress, standing on the roadside waiting for a ride.

And in this photo we see the type of ride that may pick him up. This overloaded Willy’s Jeep is typical of the regional transportation system during rush hour.

And this takes us to the conclusion of the Colombia route map. Here is a rough view of the places we explored while in Colombia for 5 months. 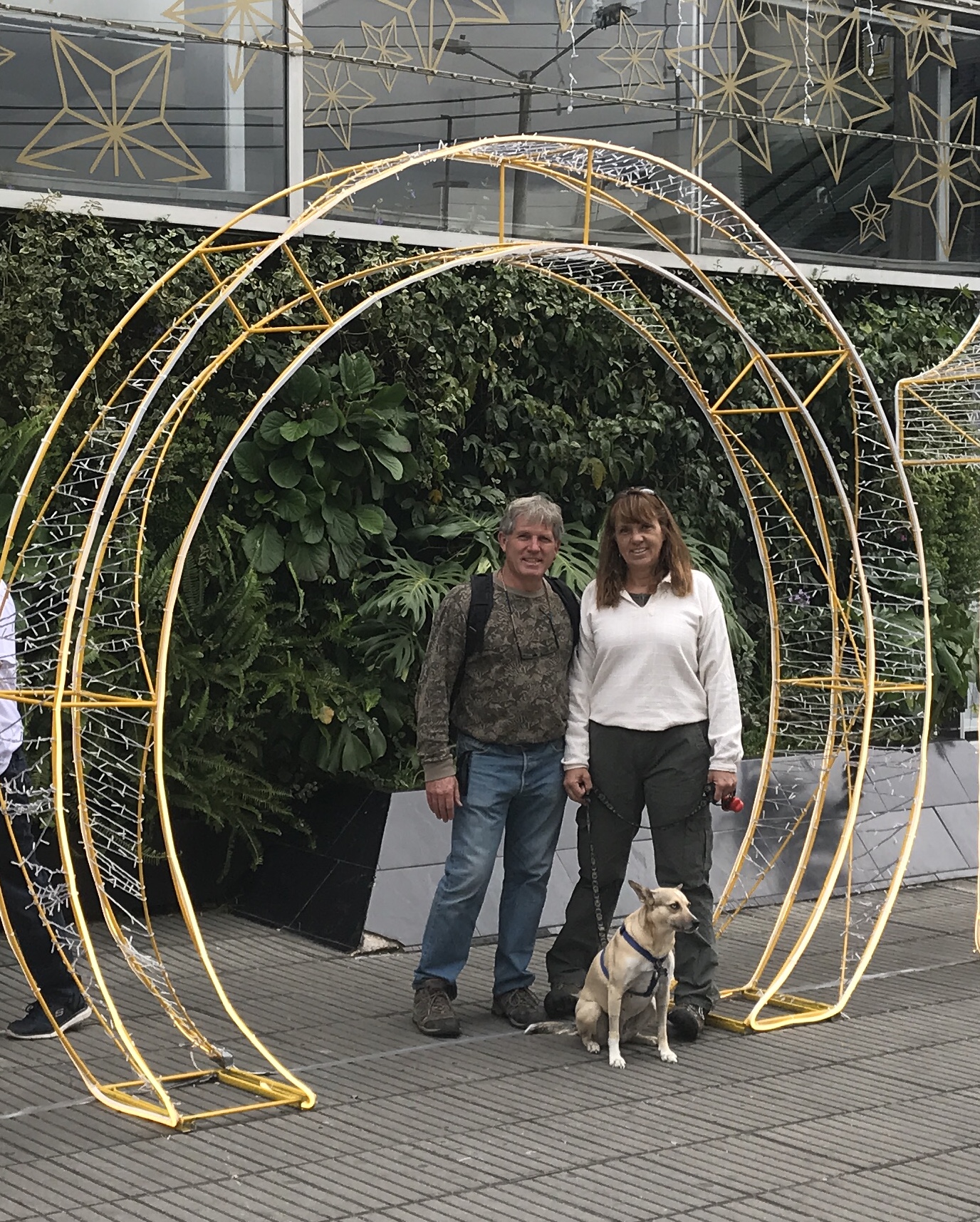 3 responses to “Colombia- headed toward the exit.”