(This blog post contains three movies, wait for them to load for the full experience)

We arrived to Panajachel, a town on the shore of Lake Atitlan and secured a campsite for a few nights.  We planned to stay two nights and ended up staying ten days!  They say that is the magic of Atitlan.  Another factor is that the roads into each community around the lake is narrow, steep, twisty and a bit scary.  Once Mike drove our big rig down the road and into the crater lake area, he was content to delay the drive out of there for a while!

And our campsite was lovely.  Just outside our back door was a huge lawn, views of the lake and wonderful gardens.  Because we were the only people there most of the time, Zeb was able to be off leash and just follow his nose around the area!

The first thing we experienced was a wedding at our back door.  The camping area was hosting a 200 person wedding complete with Western dress, traditional dress and of course, the crowd danced the Macarana!

Then a few days later our campground area hosted a police recruit party.  It was hilarious to watch 30 police trainees strip to their underwear and splash in the pool, play soccer on the grass and borrow our SUP board to paddle around on the lake.

And the next day we had other campers arrive.  This was wonderful as it gave both Mike and Zeb some entertainment for a while.  They drove a VW and had two playful dogs with them! 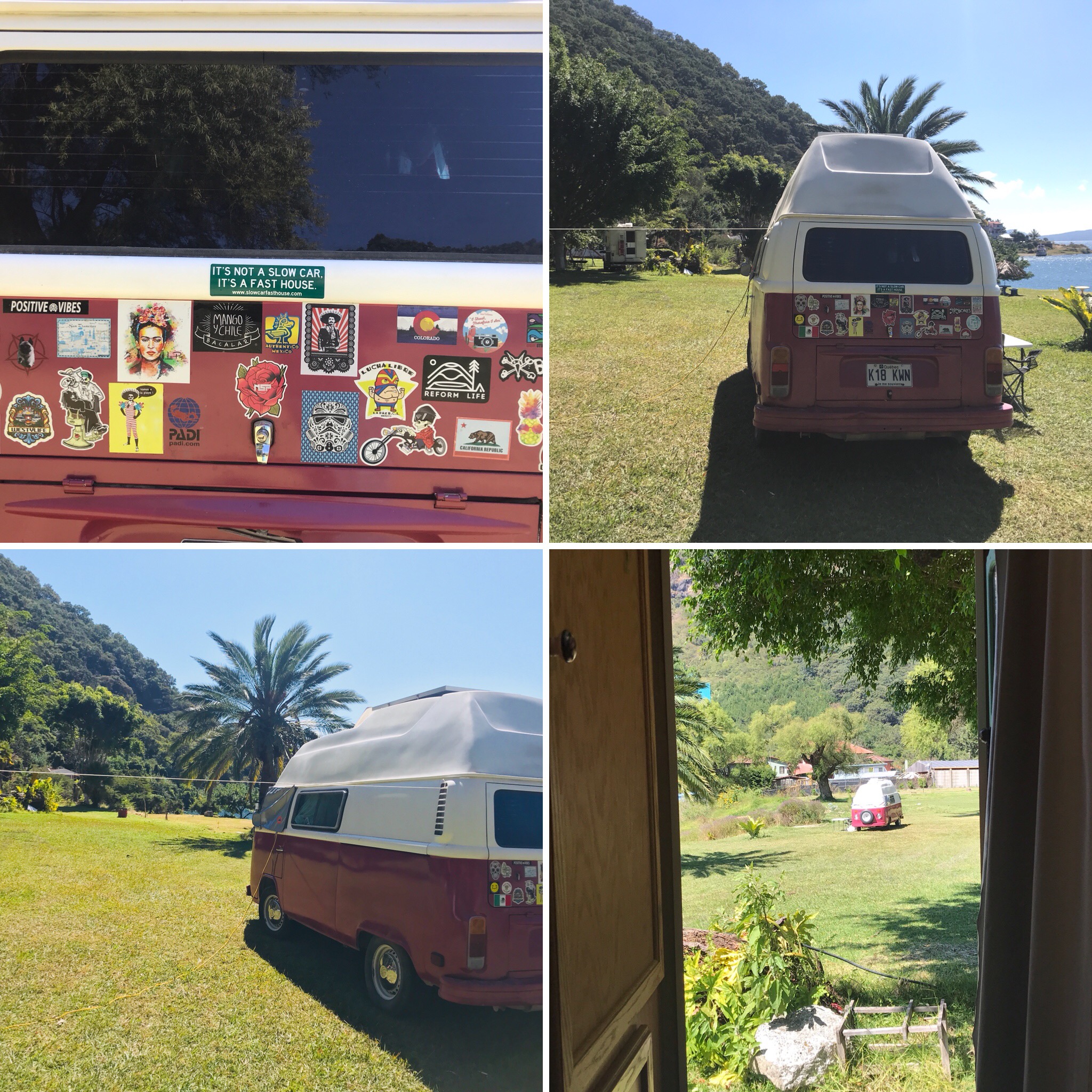 After playing for hours with the VW dogs, Zeb was exhausted. He is nine years old and starting to feel his age. 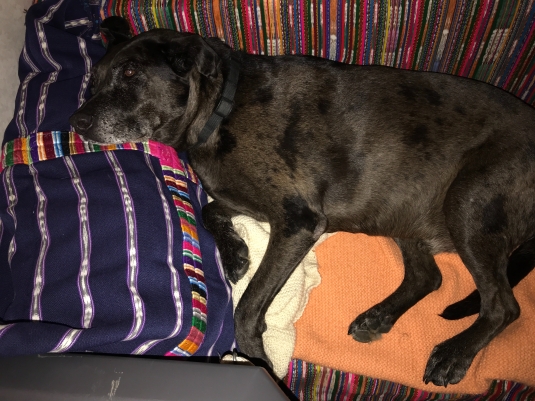 The campsite was beautiful.  We had shade, grass, the lake and gorgeous views. We all enjoyed sitting outside in the comfortable temperatures.  Although there were some little, biting bugs in the grass at certain times of the day.  We still have the marks from those biters.

Much of our time was spent just gazing across the lake and watching the clouds change the volcano views.  The lake is a crater, with volcanos all around the edge.  There are seven small villages along the shoreline and most are inhabited by traditional, indigenous Mayans who have been there for many generations.  The lore and draw of the lake is known by these residents.  And visitors have come to experience it as well.  One or two of the communities are well-known for their attraction to new-age, hippies, energy-healers, crystal-crunchers, granolas, backpackers, begpackers and vegetarians.  And yes, we heard all these terms at one point or another in both positive and negative conversations.  It is an interesting contrast and balance between the indigenous and the visitors.  But when you look across the water, you see the magic that draws people in! 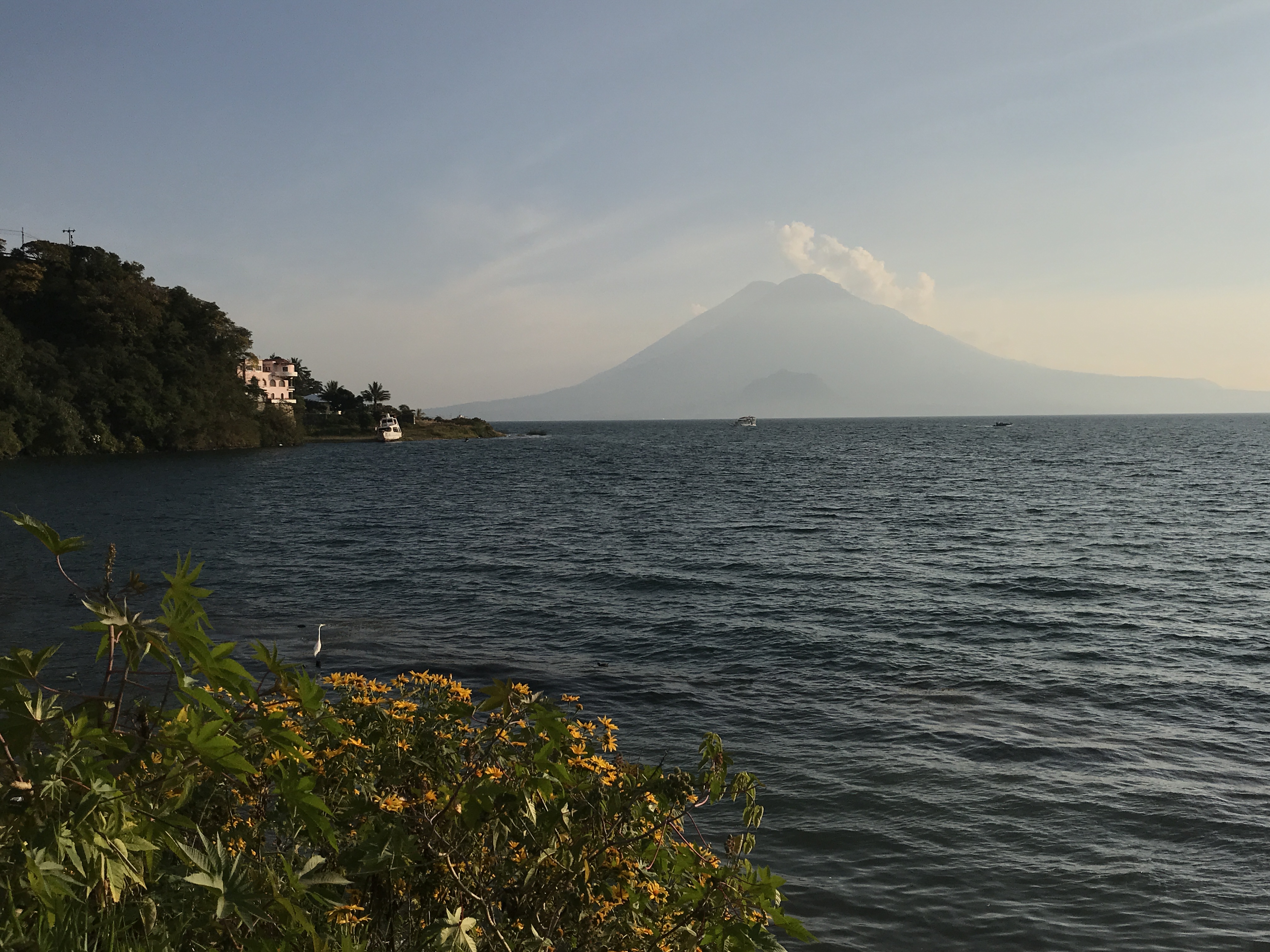 Once the SUP board was up and ready for use, we enjoyed it nearly every day.  Of course Zeb got to ride along each time it went out.  With no other dogs to push for a turn on the board, he enjoyed a lot of trips out on the water.

To move between the villages along the shoreline there are small boats or lanchas.  These motorboats are designed to carry 11 to 15 passengers.  Typically they fill with 30 to 40 before they depart the pier.  The passengers are always a blend of backpackers, locals, tourists, groceries, firewood, fruits/veggies and much more.

We rode a boat nearly every day.  And one day we decided to take Zeb on the boat ride as we went to explore a new village.  He enjoyed his ride more than we anticipated. and he really enjoyed sniffing around a new place on the other side of the lake.  Even riding in a tuktuk was okay with him!

While we were exploring we found a geocache and some beautiful street art.

One of the churches in the village had an interesting facade.  This photo set shows the way the old stone facade has been preserved, as the more modern walls were built behind it.  And the view from the front.

Another large church had this gang of neighborhood nappers relaxing on the steps out front.  They had to jump to attention and look busy when Zeb wandered by with us!

Each day presented beautiful new views and opportunities to explore.  The boat rides were always filled with color and beauty as we shared the transportation with the local Mayans going about their daily business.  This woman is wrapped in fabric to protect herself from the sun and the splashing water of a rough lake crossing. 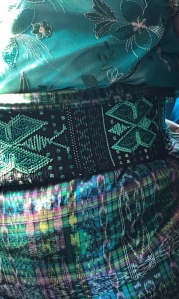 We also visited a couple of museums in Panajachel.  One of them featured information about some of the Mayan ruins around the edge of the lake and the other one had some details about the ruins that are underwater in the lake.  None of this has not been fully explored because it is considered a sacred area and is not to be disturbed. 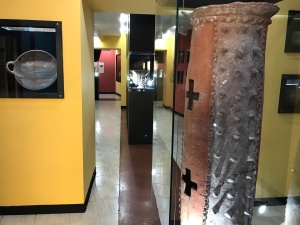 The view from to the top of the hill, looking down onto our campsite shows the grass, trees and gardens of the area.

And now for interesting story that came from our visit to this area.   In the following photos you see Geneva wearing a green skirt of Guatemalan fabric.  This skirt was made by her mother many years ago.  The fabric itself is possibly 40 years old.  Geneva’s mother wore the skirt occasionally, and there were probably two smaller ones for Geneva and her sister.  But the story, the history and the origin were never known.  Somehow a beautiful bolt of green, Guatemalan fabric ended up in Cottonwood, Arizona.  And Peggy made it into skirts.  In 2016 this skirt was one of the few items from her mothers closet that Geneva felt compelled to keep.  And she chose to wear it to the village this warm winter day.

While walking through the village we noticed many of the women weavers looking closely at the skirt.  Finally we stopped to ask one of them for some information about the fabric.  Her response (translated from Spanish) was that the material is a very well-made antique.  She could tell by the design that the fabric was woven in an area called Totonicapan.  The fiber of the fabric is old, genuine, hand-spun cotton, made with great care.  She expressed that it was valuable, old and produced by a skilled weaver.  Her respect for the antiquity and quality of the fabric was apparent in her eyes and the way she touched the skirt.  It felt very special to have this conversation about a skirt that means so much to Geneva and will remain with us as a memento of her mother.   This antique from Guatemala has found its way back to the home country, and will now travel onward!

And we will close with a funny picture of Zeb and Mike goofing around inside the camper.  With good weather, gorgeous surroundings and plenty of time to relax, we really enjoyed our time at Lake Atitlan and the various villages surrounding the lake.  It is a beautiful gem of Guatemala. 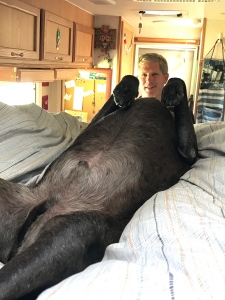 One response to “Lake Atitlan and surrounding villages”