Stripping the original decals off of the passenger side took a little longer.  Those little grey stickers were harder to get off.  There were also more windows, openings and issues to work around. 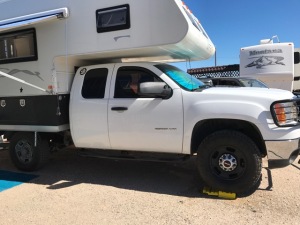 But once the artists pallette was cleared, he was ready to go to work.  This side would be Israels own interpretation of Geneva’s tattoo.  This tattoo was developed by a tattoo artist in Cottonwood about 10 years ago.  He was charged with turning a list of words into her one and only time under the tattoo gun.  The words were: drag racing, scuba diving, travel around the earth, peace sign, ying/yang, Volkswagens and the quote “all who wander are not lost”. 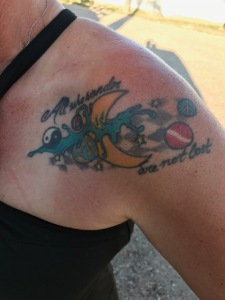 Israel took a photo of the tattoo and developed a sketch for the side of the camper.  He cut out numerous templates that he would trace for the circles and stars for the design.  Then he went to work. 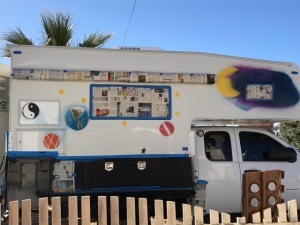 Over the next few hours, the design began to emerge.  One day Israel brought his son to hang out while he worked. 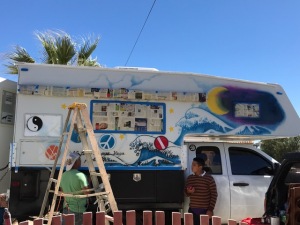 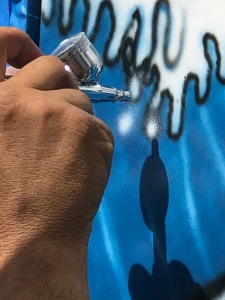 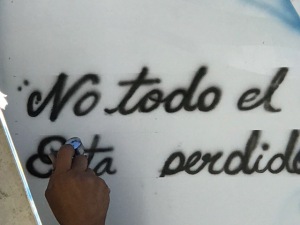 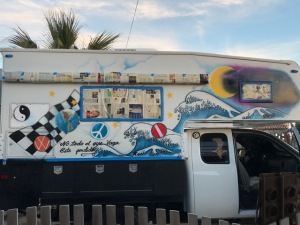 The final interpretation of the tattoo was called “Geneva’s universe of life” by Israel.  And an important aspect of the work is that the words have been translated to Spanish (since we will be leaving soon for Latin America and South America)

The final artwork on the passenger side of the camper looks incredible.  The clouds have great depth and color and seem to change in different lighting.  The water mimics the waves of “The Great Wave of Kanagawa” (as requested) and the images that represent significant elements of Geneva’s life are well represented in the vivid colors of the artist.

In addition to the artwork, this side also got black rims, black frame and black camper wings.  Stay tuned for a reveal of the words on the back of the camper as we wrap up the artwork on the camper!