Utilizing a modern, social media source provided us with a perfect stopping point in Whitehorse, Yukon. We used the Facebook group Vanagon driveways???? and located Shona. After a few arrangements we were all set with a driveway, shower and some fantastic hosts. This stop gave us a chance to catch up on laundry, buy some groceries and see a dentist (yes, again). We shared a wonderful meal and some great conversations with these folks.

We also made a stop at the local lake and dam area to check out the fish ladder. Each year the salmon are compelled by forces of nature to swim upstream to spawn and die. They do not eat during this journey, and exhaust themselves to such a degree that many do not survive. Encountering a human-made dam makes their task impossible and the river impassable unless a fish ladder has been installed. This one is the longest fish ladder in the world. It begins about 1/3 mile below the dam, where the fish are able to continue swimming upstream, but funneled into the flume

They pass into a tank with observation windows where they are counted and recorded.

(this guy is about 3 feet long) and then they are released to continue up the flume, which leads over the dam.

They then swim across the lake and the remaining distance to their spawning grounds up the river.

This journey begins at the Bering Sea and takes them thousands of miles WITHOUT EATING!!! And when they have spawned, they die in the river and become bear or fish food. An amazing part of such a fragile system.

The new VW friends in Whitehorse suggested that we take the drive out to Skagway to camp on the tidal flats of the fjord. They were right! It was a beautiful drive

with amazing scenery on all sides. One of the lakes was an amazing color of blue

We passed through Canadian and US Customs easily and then ALASKA; WE MADE IT!

We headed for the former town site of Dyea and settled in to a camping spot on the flat shoreline to watch the tide roll in. Within minutes Mike was using our TREDs to rescue a woman who had stuck her minivan deep in the sand. 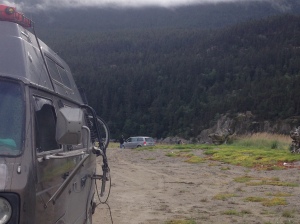 The tidal flats were a beautiful place to spend the night 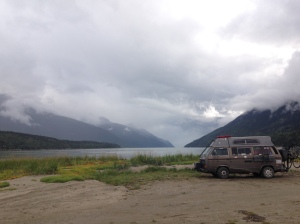 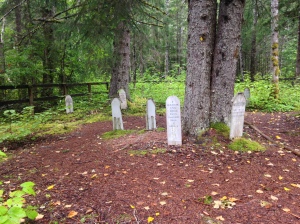 This was a tragedy that occurred during the Klondike gold rush days when an avalanche destroyed homes and killed many miners.

In Skagway we stopped by the ferry office to talk about prices, dates and destinations that would allow us to ferry and explore the Inside Passage area when we are ready to head South. We also checked out a serious snow blower

which is on the front of a train engine.  And filled up with gas at true Alaskan gas prices

and then headed for a boondocking site on the lake side near Carcross, Yukon Territory. The temperatures are dropping and our heater is deployed nightly. We may hit snow before we are done here in these parts!