This one of the places in the world where a person can feel very small. Everything is so large here. The cliffs are very tall in some places. The forest is very thick in some areas. The grassy fields seem to stretch on forever in some parts. And the ocean……. a fading line of silver-gray that reaches to the edge of the sky and then goes on for infinity.

Most of this drive followed the Cabot Trail. This took us to a campground in the Cape Breton National Park.

The campground is located where a brook bubbles off of the mountains and pours into the sea. The dogs enjoyed a romp there.

But the mosquitoes are terrible in the woods, so the dogs wore their natural bug repellant patches to deter the flying pests around their faces.

We also drove to some of the small villages that are off the Cabot Trail. Most of the signage in this part of Nova Scotia (called The Cape) is also bilingual. But instead of French, the second language is Gaelic!

These villages are huddled around bays with small harbors

and plowed fields of green.

The entire area is very lush this time of year.

We even found this gem while walking in the woods

We followed a brief trail to see this stunning waterfall.

Then we stopped for breakfast overlooking the ocean 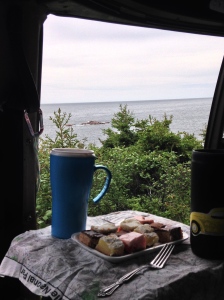 and made it to the most northern community 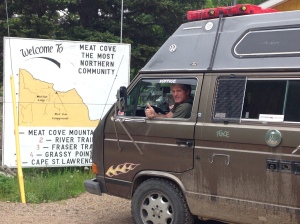 to pose for a photo. Then we ventured off the pavement again to make our way to a campsite we read about in iOverlander (an app we use to find camping spots shared by other travelers). This one was AMAZING.

We were perched on a grassy knoll, overlooking the ocean below 200 foot cliffs of rock.

The campsite was perfect, so we spent the evening watching the ocean and the birds. 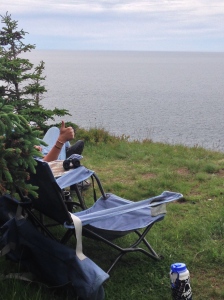 . But before the late night sunset (about 9:15pm) the seas began to grow dark and stormy

and the wind picked up as the rain began to fall.

It rained all through the night. Sometimes a soft sprinkle on the van roof and sometimes a hard drumming that woke us up. The next morning we packed up in the rain and prepared to get out of our crows-nest-style perch. But a heavy van, wet grass, and sticky clay-like soil was not a good combination. Within minutes of trying to turn the van, we were stuck, spinning tires and throwing mud! Just thirty feet behind the van was a 200 foot cliff to the sea. In front of the van was a pine tree. Underneath the rear wheel is a rut that is deeper and stickier than a bowl of pudding. And did I mention that we were about 6 miles from a village?

Mike unhooked the TRED’s from the side of the van and we laid them over the rut in the grass. The front one tucked up tightly against the tire, with the other one right behind it.

Mike revved the engine and backed up the twenty (not thirty, as stated above) feet needed to make the turn. Then hit the gas and charged up to the main road and off that precipice. We had rescued ourselves again! 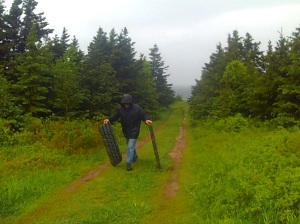 . We left behind the ruts, to warn the next camper of the potential trouble at this beautiful location.

From a few miles down the road, we turned and looked back through the rain, on that beautiful cliffside camping spot

and breathed a sigh of relief that it all turned out okay.

Cape Breton is a “not-to-be-missed” experience here in the Maritimes. One of the motorcyclists we met along the way summed it up well, “It just keeps getting better, the further we go.”

10 responses to “Cape Breton- the edge of the world.”