In the last post we shared info about the European Space Agency located in Kourou, French Guiana, South America.  While the ESA  is a major focus of business and tourism in this little territory of France, there are many other attractions to see in this country.

After a bit of driving through the thick, hot, jungle we came upon our target.  We were actually searching for a geocache, but it was located in a former Annamite prison facility.  The Bagne de Annamite is a prison that was constructed by and for the Indochinese prisoners of France in the 1930’s. These were mostly political prisoners and their work assignment was to develop their own facility.  These photos show some of what is visible today, although the jungle is trying hard to overtake the remains. 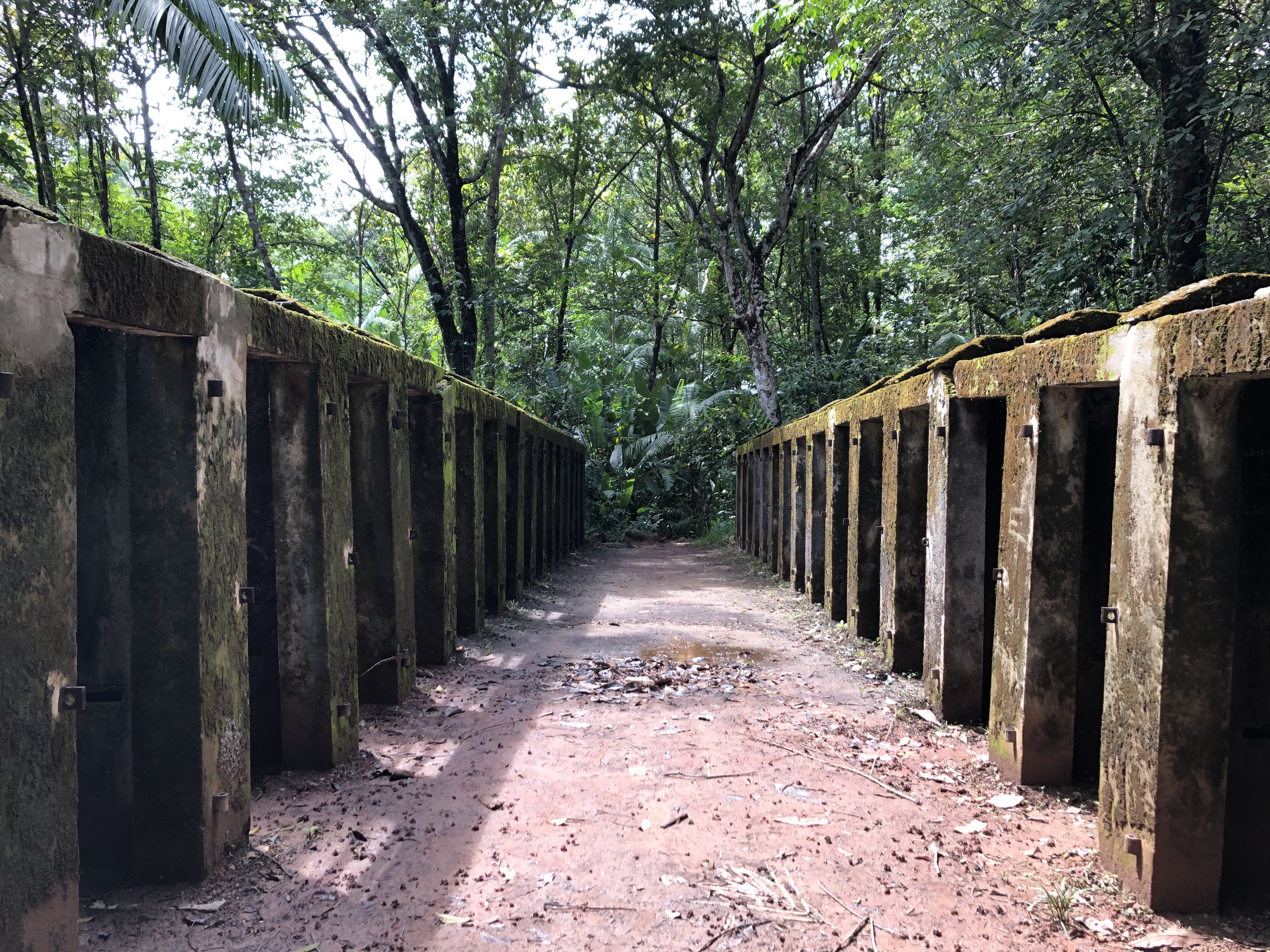 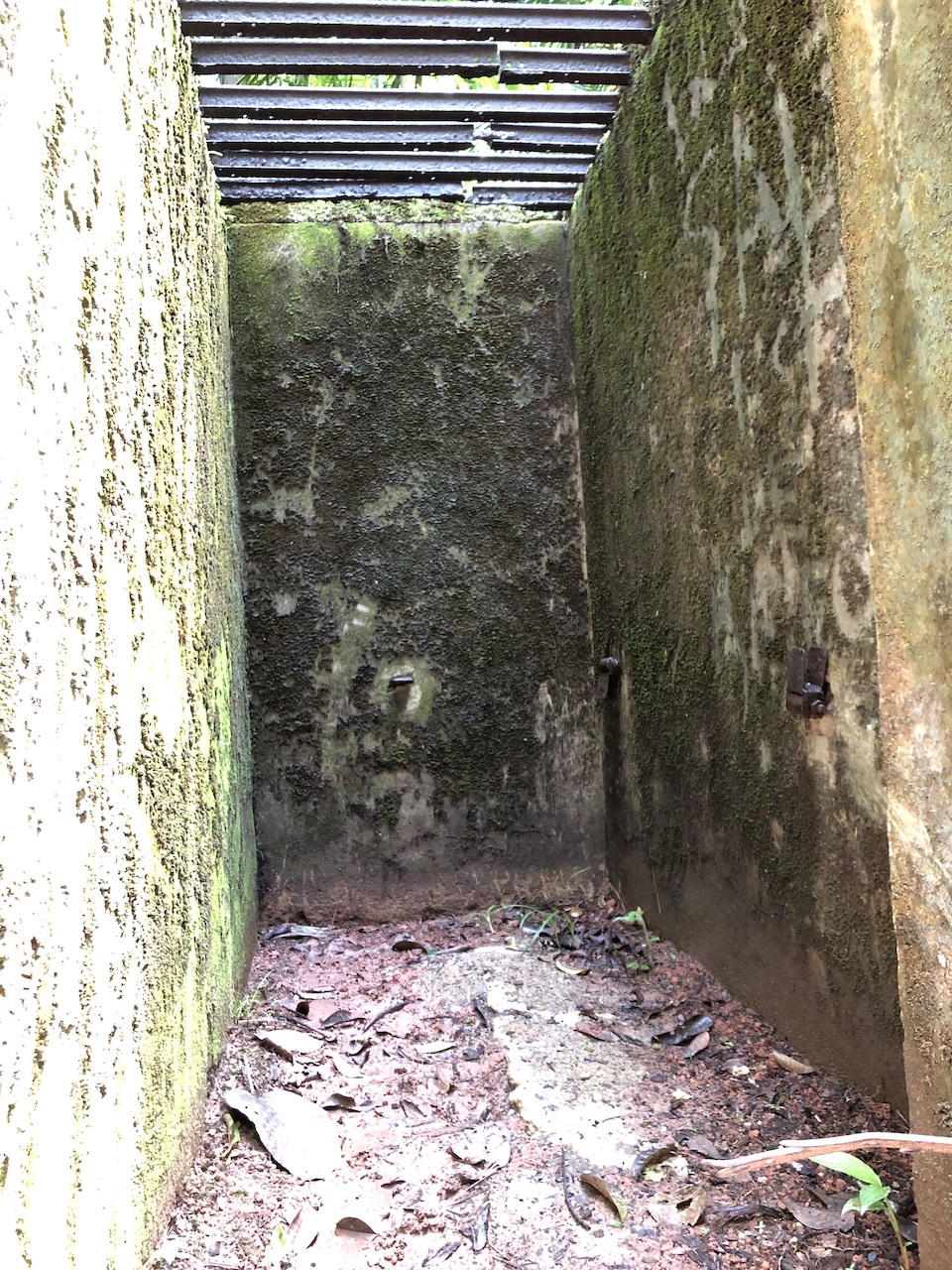 Those prison cells are still standing from the 1920’s.  That small, concrete box must have been a very unpleasant place to be locked up.  Remarkably, there are about 15 of these other concrete structures still standing in various places in the jungle.  Do you know what this is? 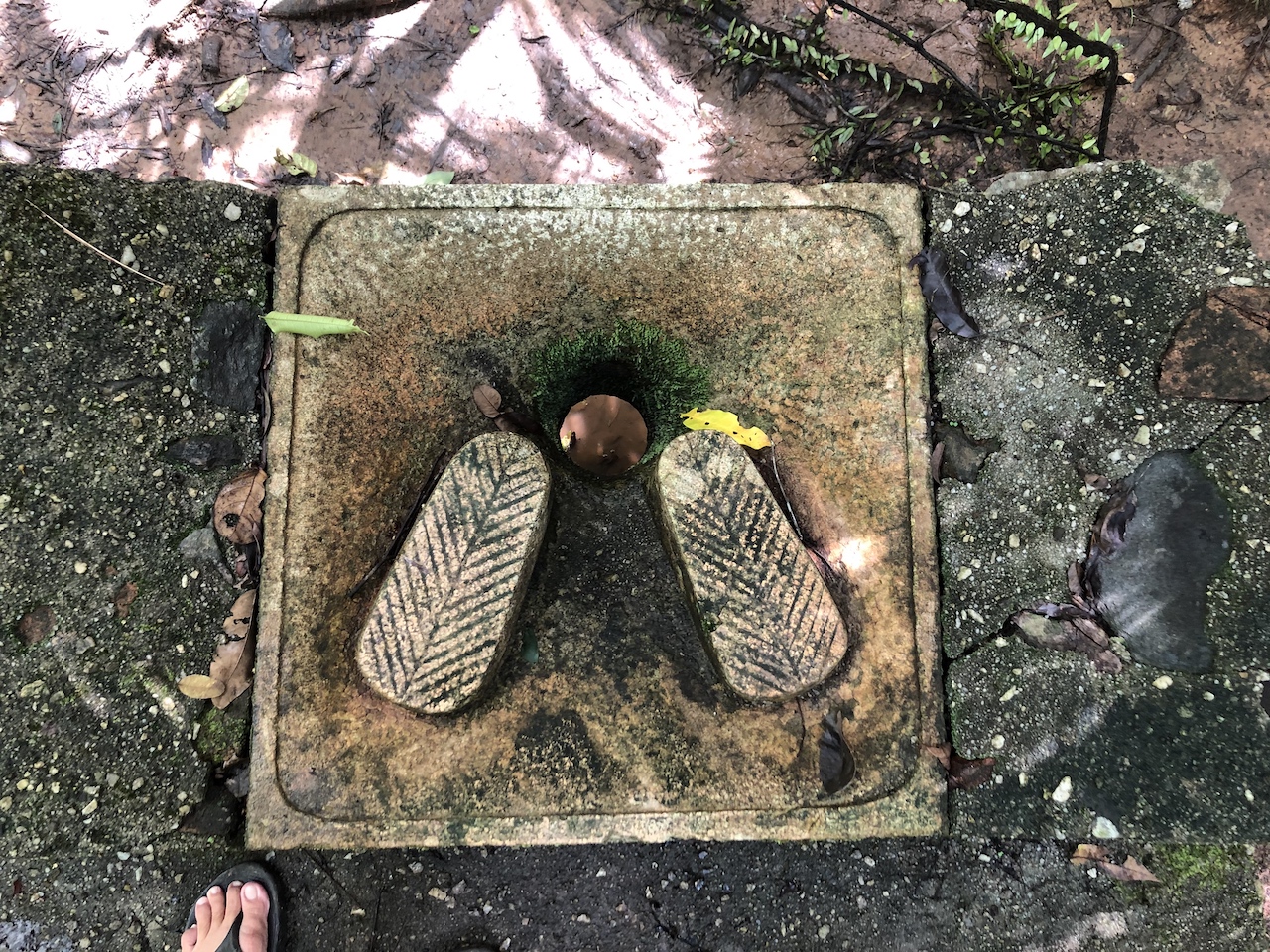 Yes, your feet go on the little sandal prints, and then you squat down and do your business.  Underneath is an open channel or trough, which carries away the human waste to another location.  These little channels criss cross throughout the area, right next to the channels that carried the “fresh” water to be used for drinking and cooking and washing. (gasp!)

And here is a double throne, in case you and your friend have a lot to talk about while squatting.  Pacha is investigating it with a look of “bleccchhh” on her face! 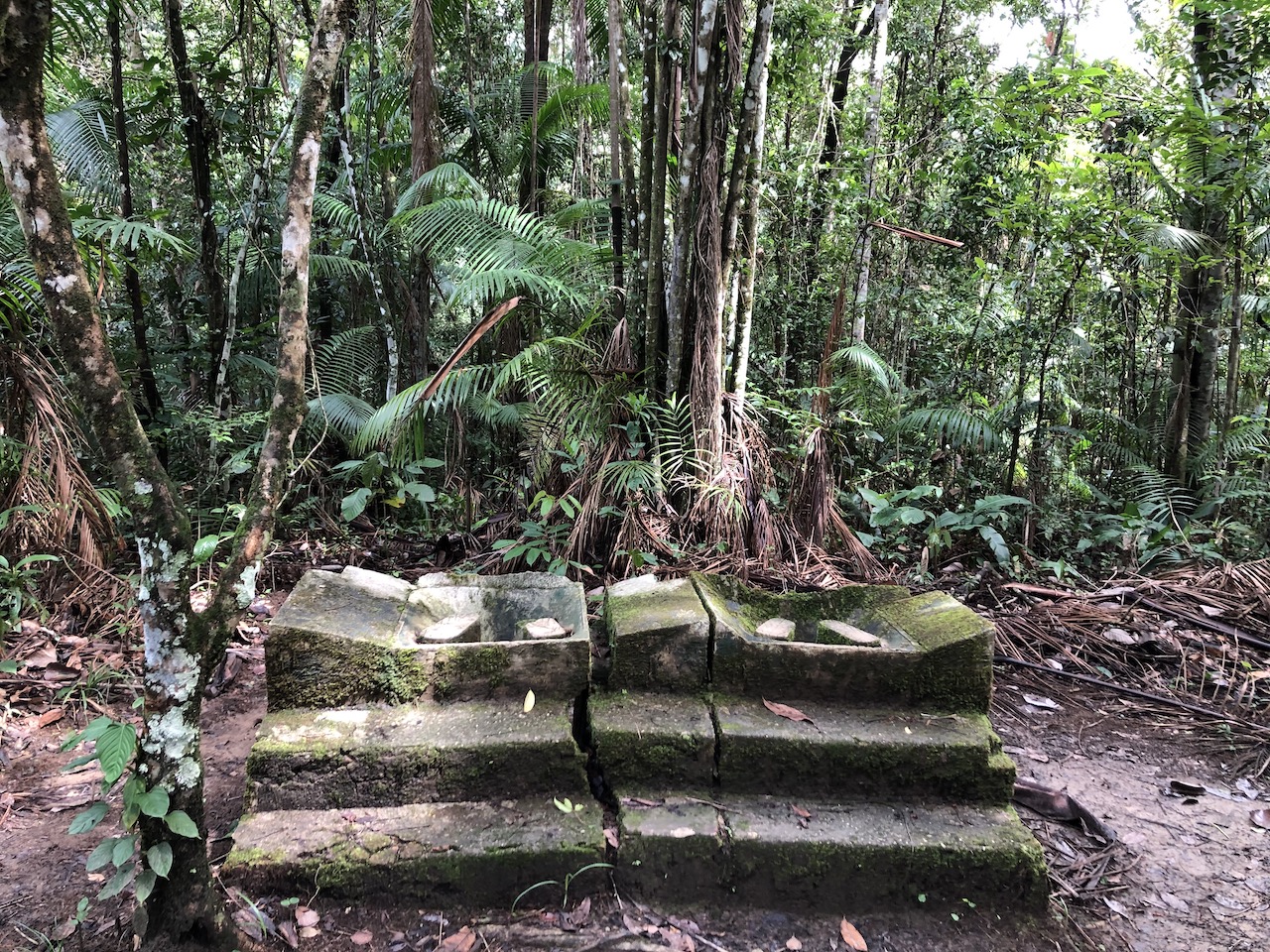 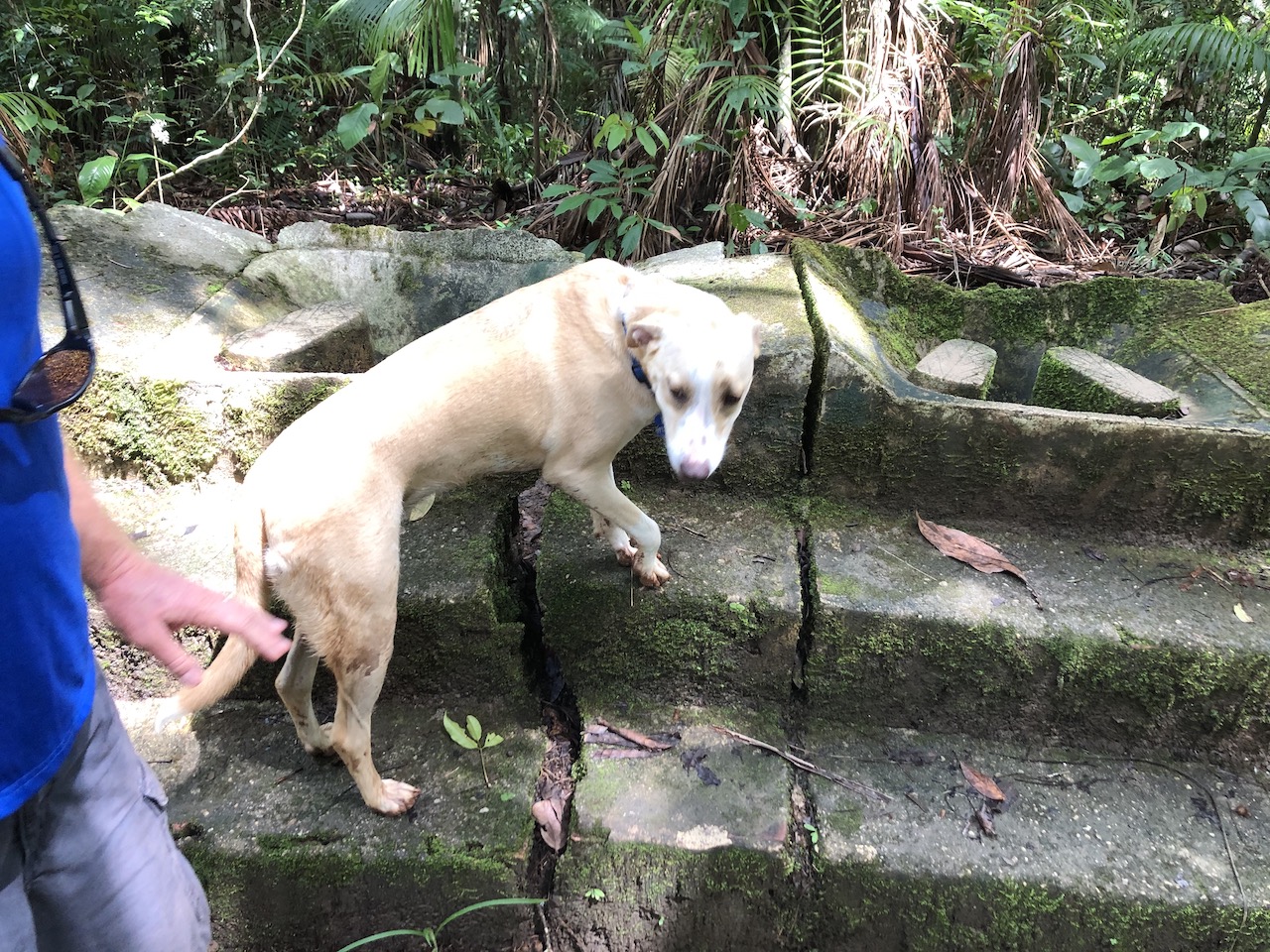 We did not locate the geocache, which was supposed to be inside one of those toilets.  But we enjoyed exploring the jungle prison camp.   Actually, many of the geocaches in French Guiana are missing.  It was quite a frustrating place to go geocaching.

While exploring along the highways and back roads of French Guiana we noticed much of the French Creole, Islander and African influence.  Notice the traditional “Madras plaid” skirt on the woman.  That is worn by many and used a school uniform in some villages.

Here is a waiting room scene,  which shows some of the faces of French Guiana citizens.  And yes, the main language is French.  But many people speak English, and a wide range of local dialects. 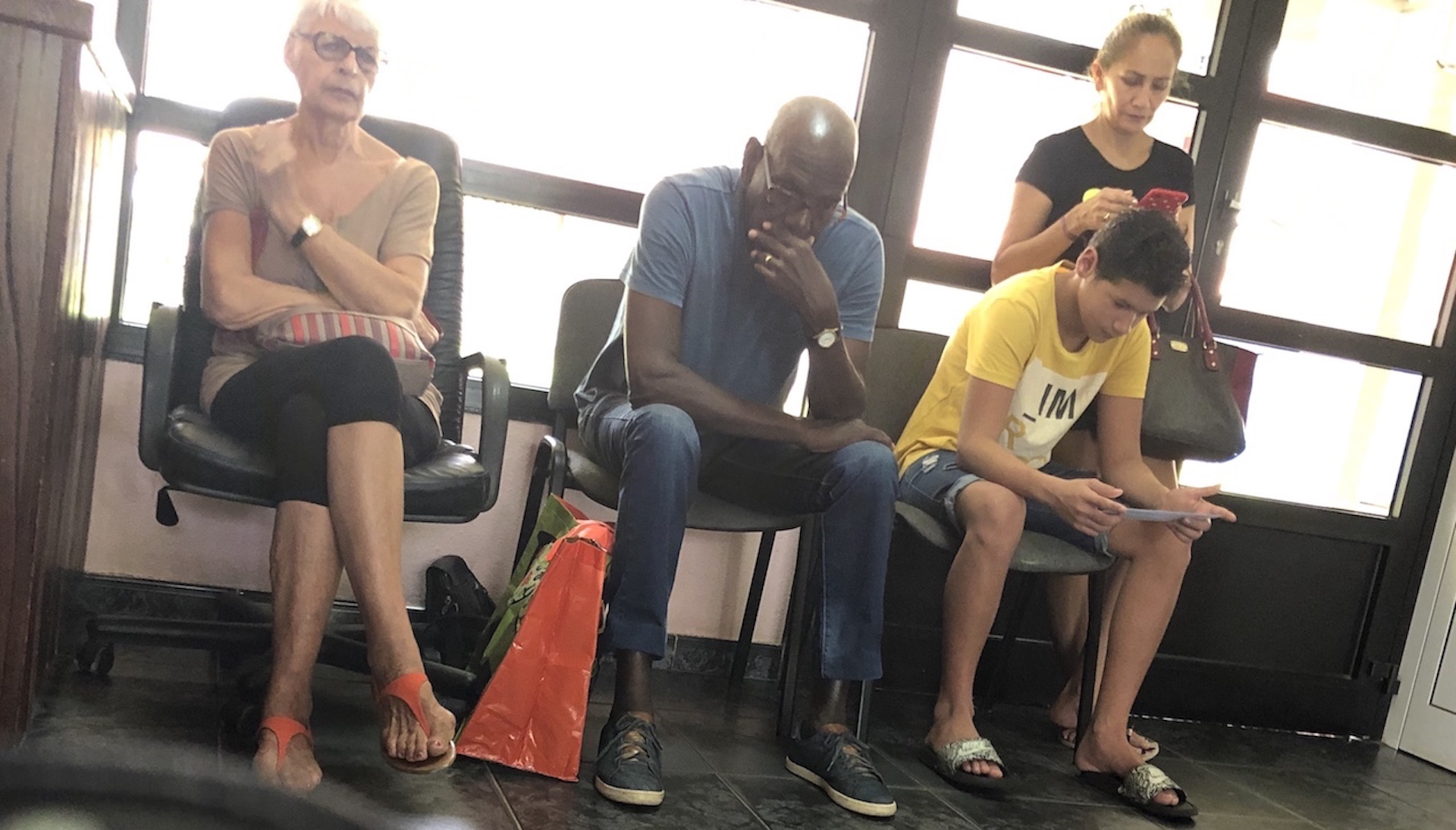 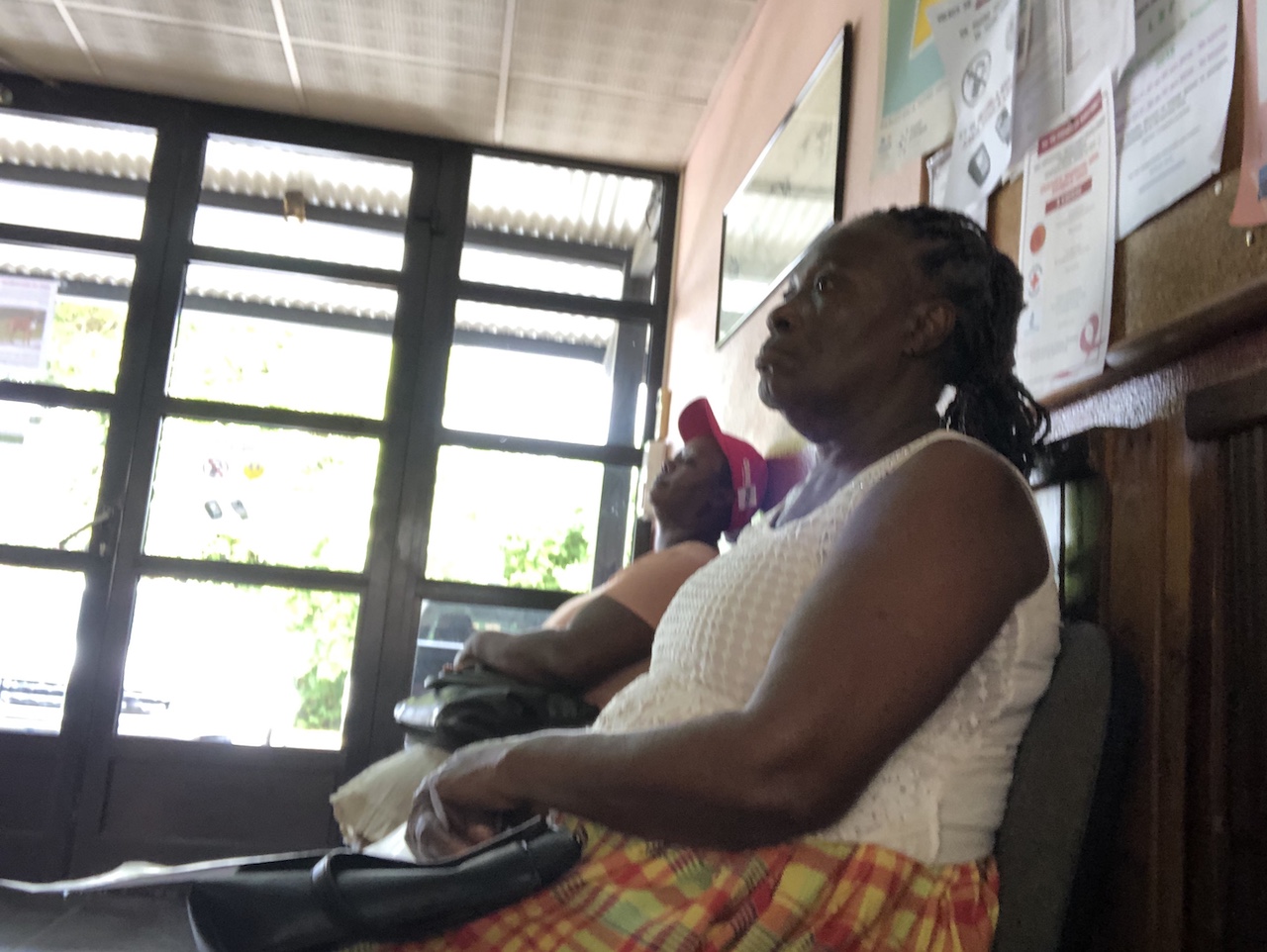 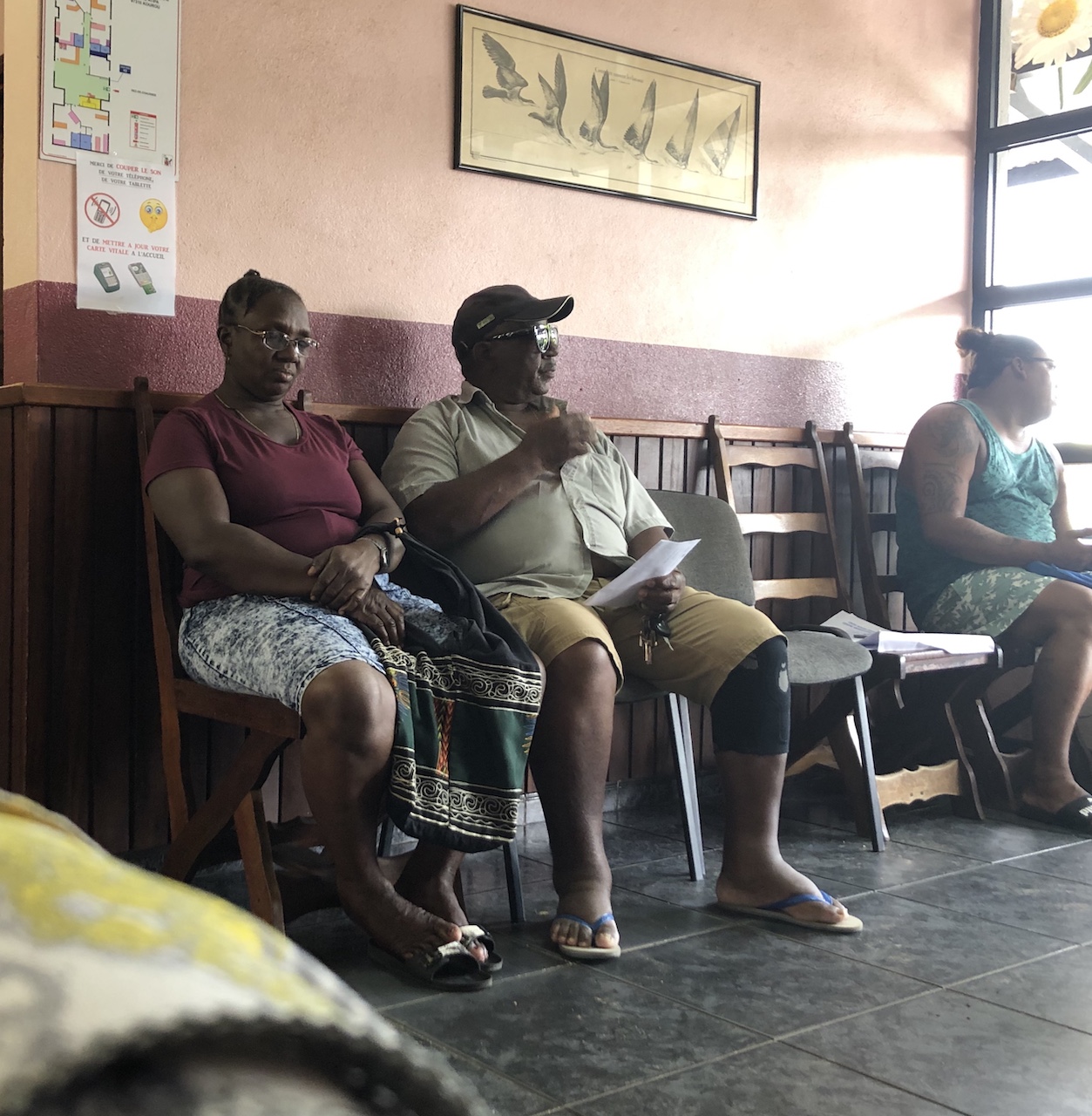 And along the back roads, we pulled over to shop at a small, roadside, farm stand.  We purchased some home grown cucumbers and tomatoes.   We skipped the locally grown hot peppers, called cayenne and the eggplant.  What an interesting variety of garden foods, though. 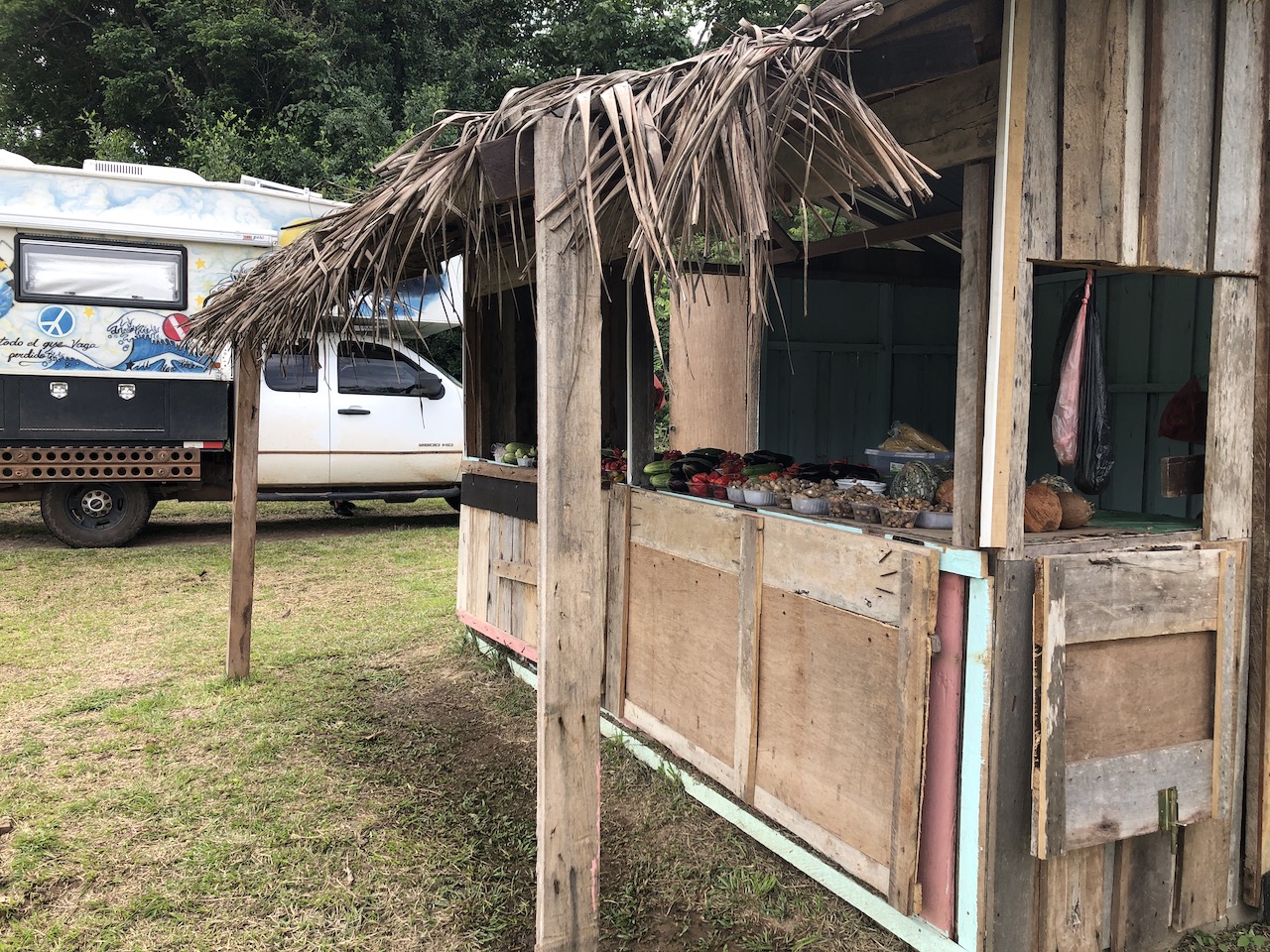 Next we stopped at the Church of Saint Joseph for a geocache in the parking area.  (Notably, this geocache was also missing!)  The walls of the church are open air, covered with just slats of wood.  This allows the hot breeze to pass through but does little to reduce the temps or help the high humidity.  We did enjoy the beautiful hand painted walls, altar and ceiling, although we had a tough time translating the historical significance of this location. 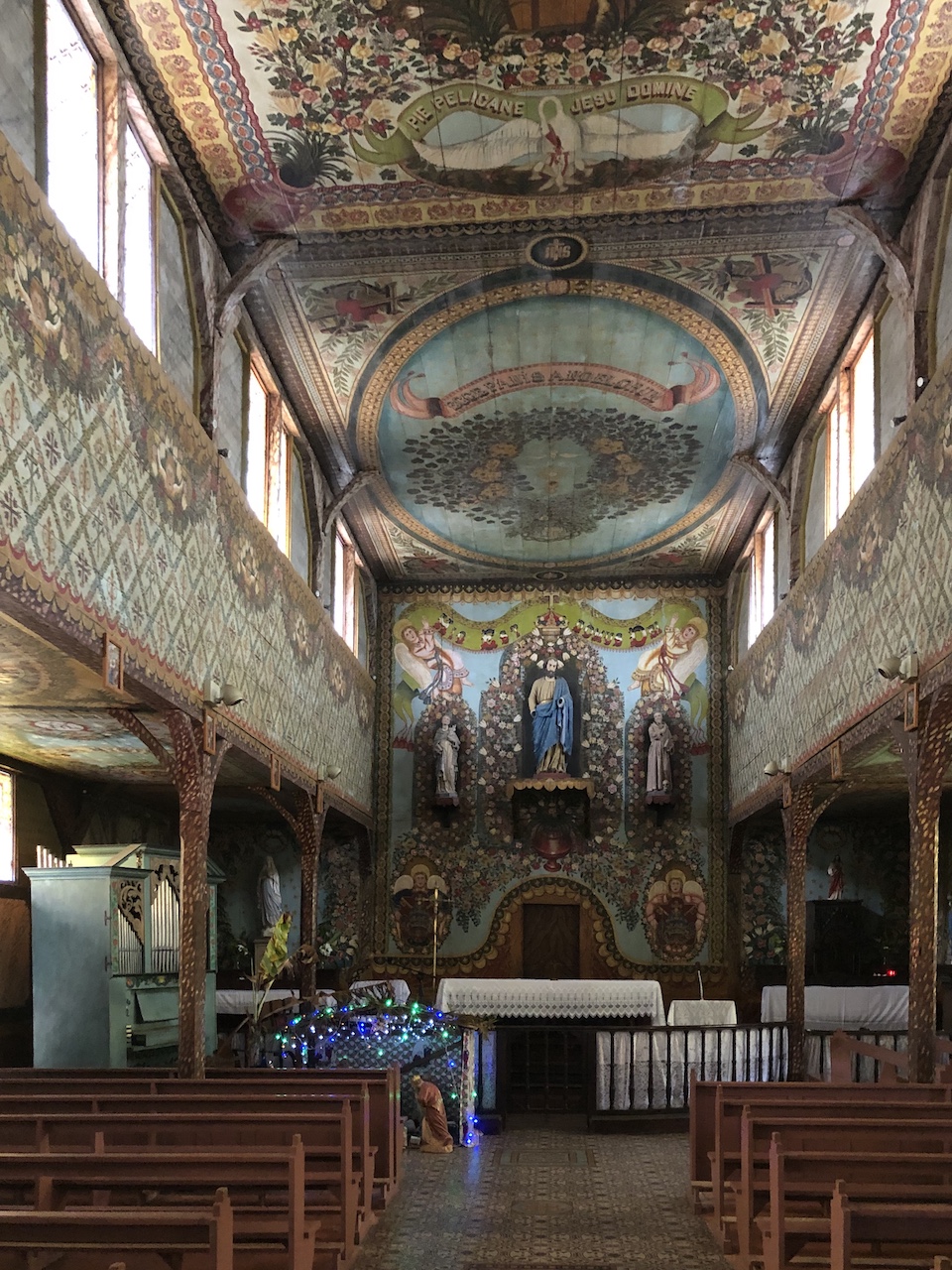 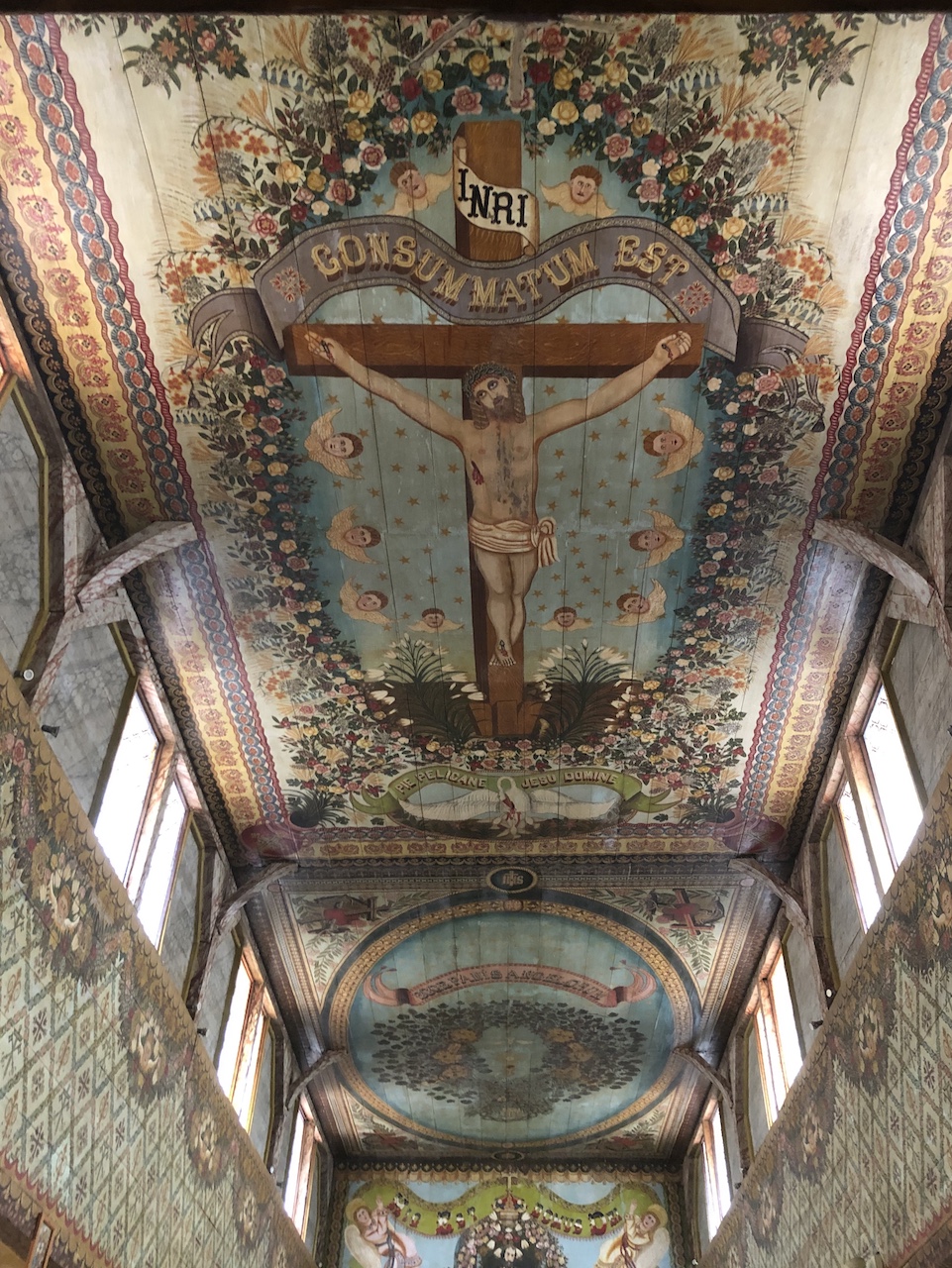 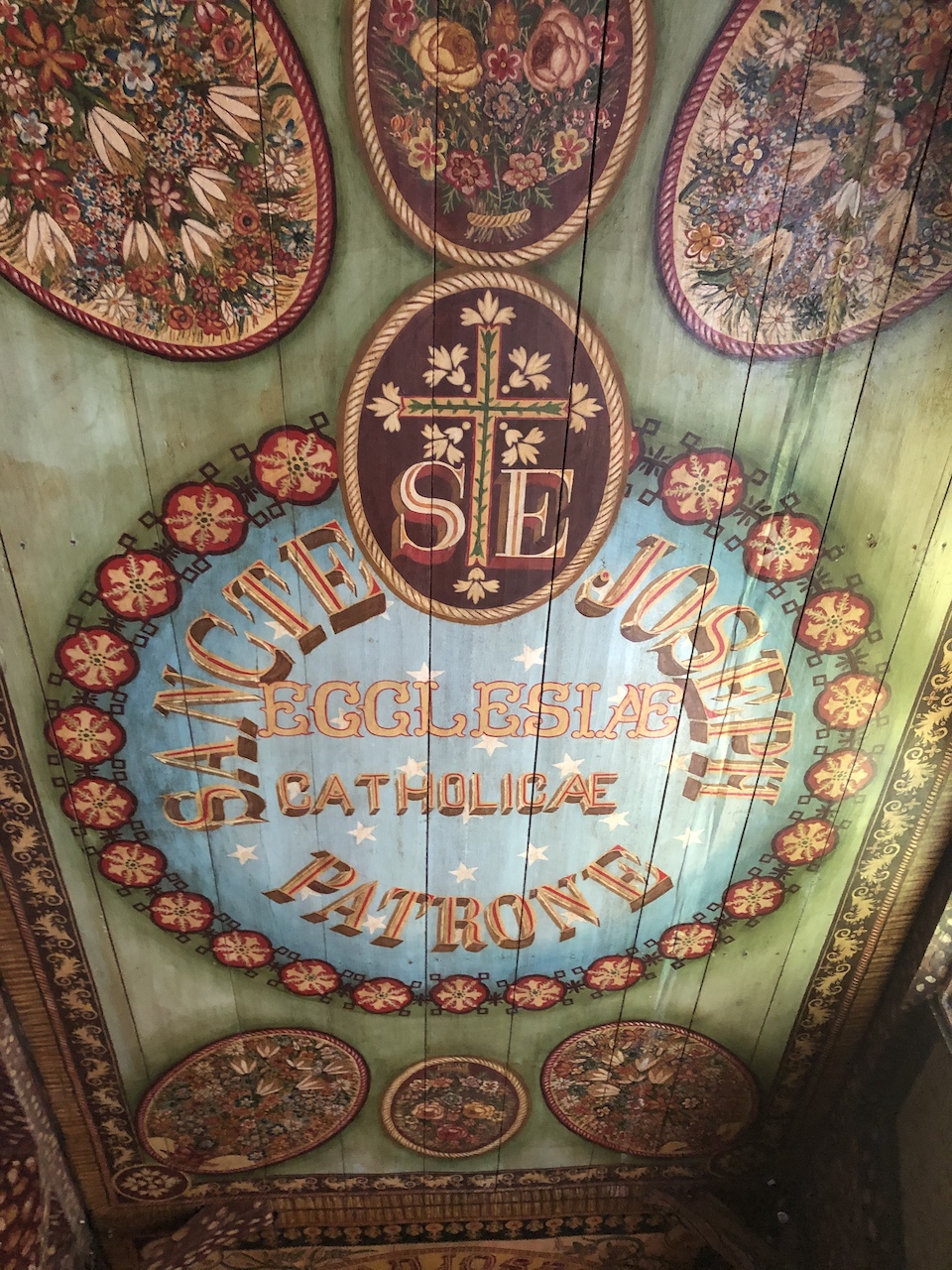 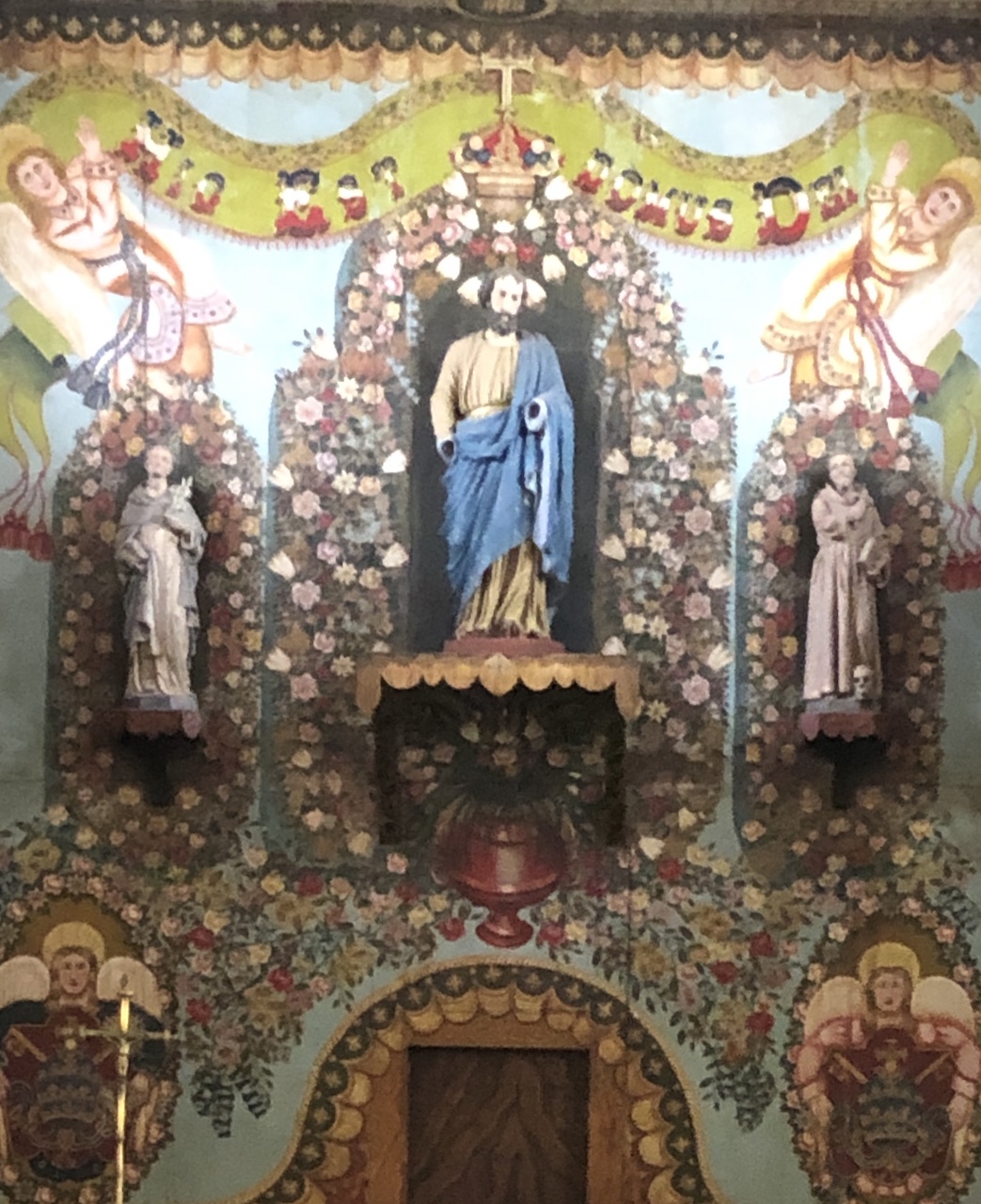 Even the little hand carved and hand painted organ was beautiful in this little church.   We lit a memorial candle and left it there for sweet memories of our lost loved ones. 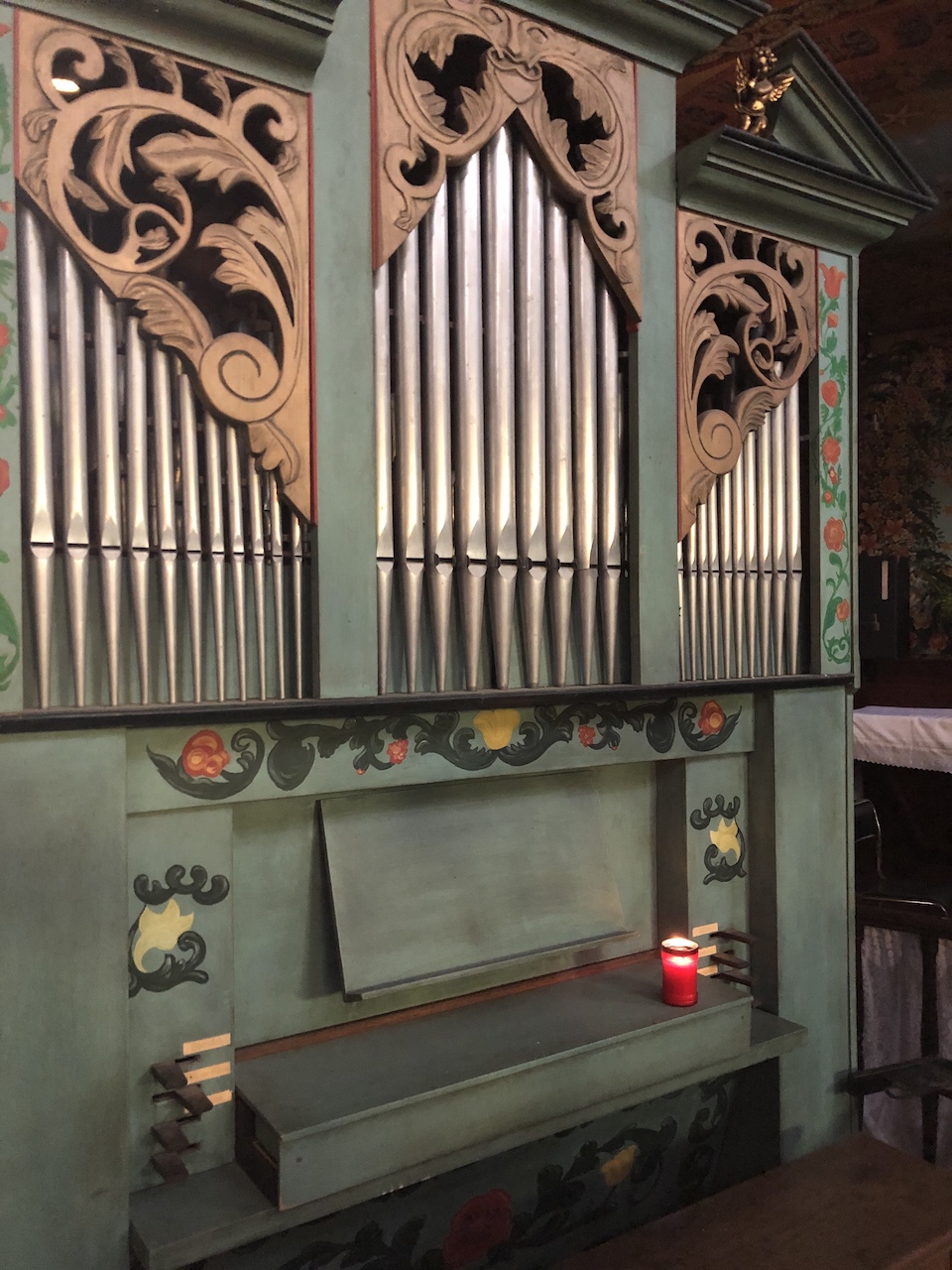 The capital of French Guiana is Cayenne (yes, like the pepper) and we stayed there for several days during our time in the territory.    We were thrilled to find that the big grocery stores carried a huge selection of cheese.   This may be no big deal to you, but cheese is one of the most inconsistent products we shop for.  Often it is not aged, soggy and even overly fermented.  A huge cold case of aged cheese was a great surprise.  We even got a little silly in our excitement over the cheese offerings! 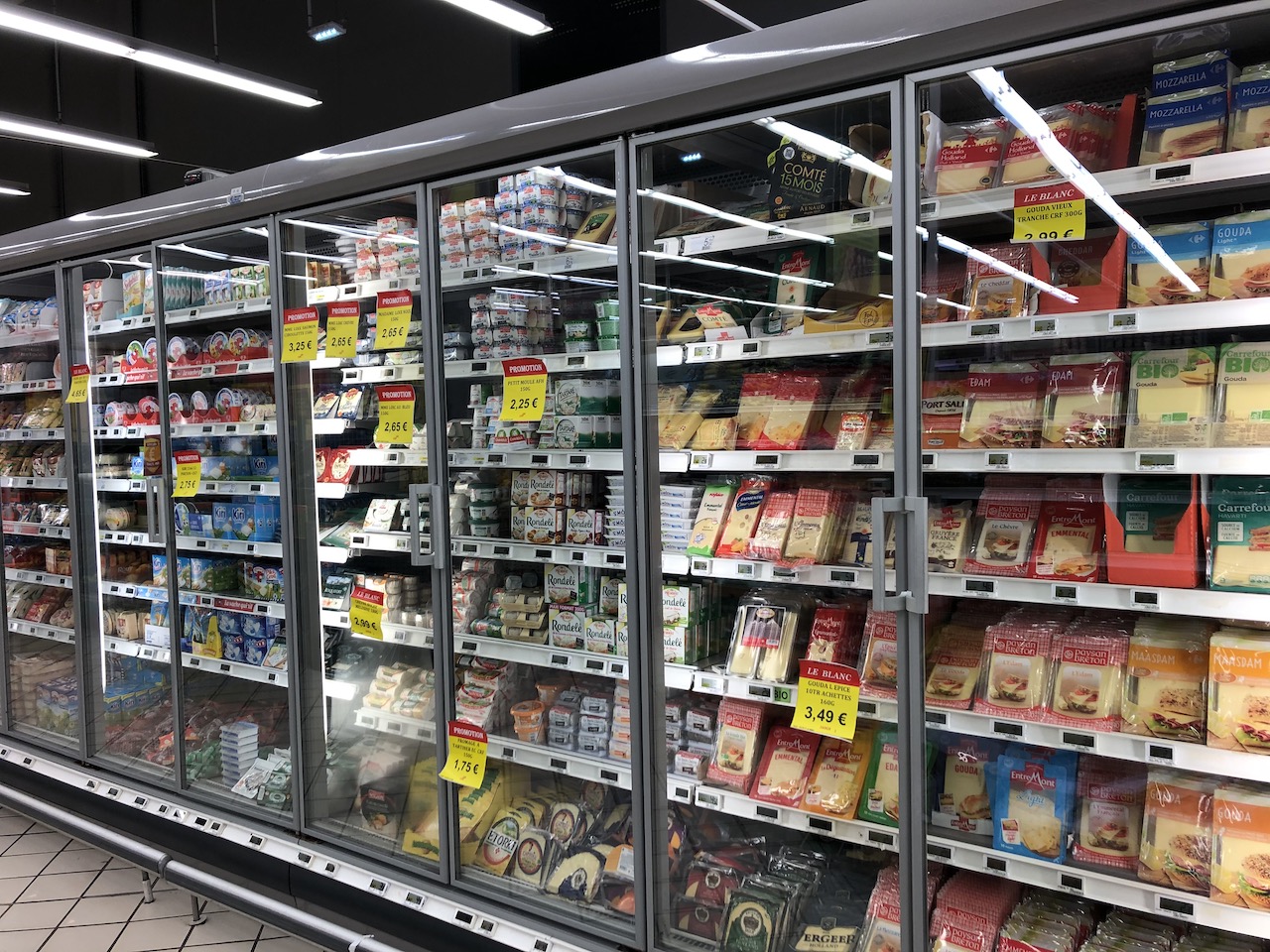 While scanning the shelves, we found this cute little toy that is representative of what Geneva could become ….. a crazy dog-lady with a bunch of dogs! 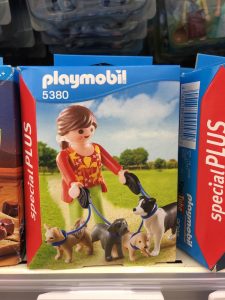 Speaking of dogs, here is a little video showing how Pacha and Nica react when Geneva discusses a chewed up paper with them.  I wonder who is guilty of eating the paper?

The capital city of Cayenne was also built during the time of developing the prison system.  On top of a hill in town is an old defensive fort.  Another location with a missing geocache. 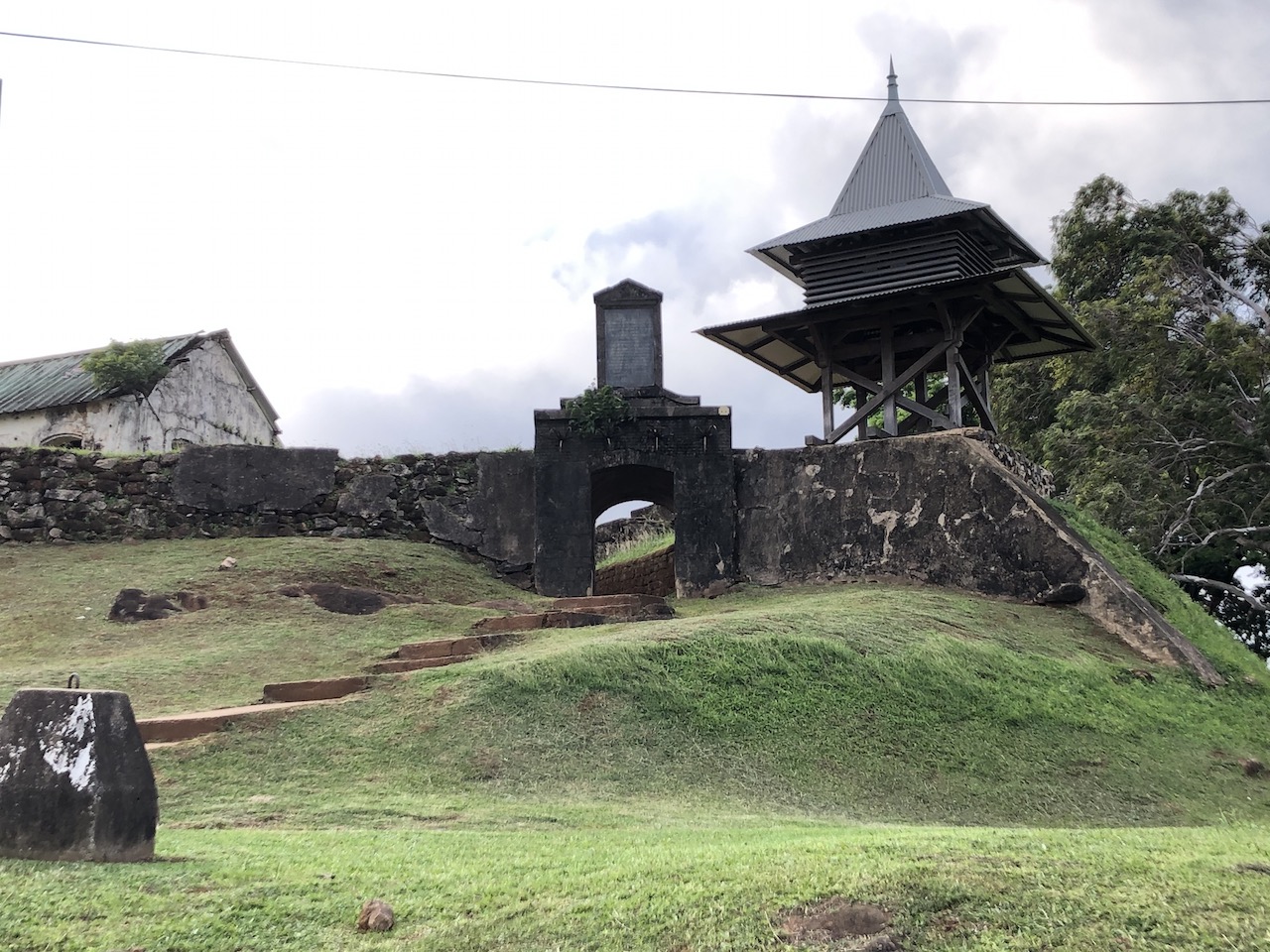 And the views across the city from there are very interesting.  The rooftops and buildings range from rundown and ramshackle, to new and modern.  So much contrast in one small capital city.

Cayenne is built along the two waterfronts, where the river meets the sea.  We enjoyed a walk in the public park.  (Again a missing geocache) 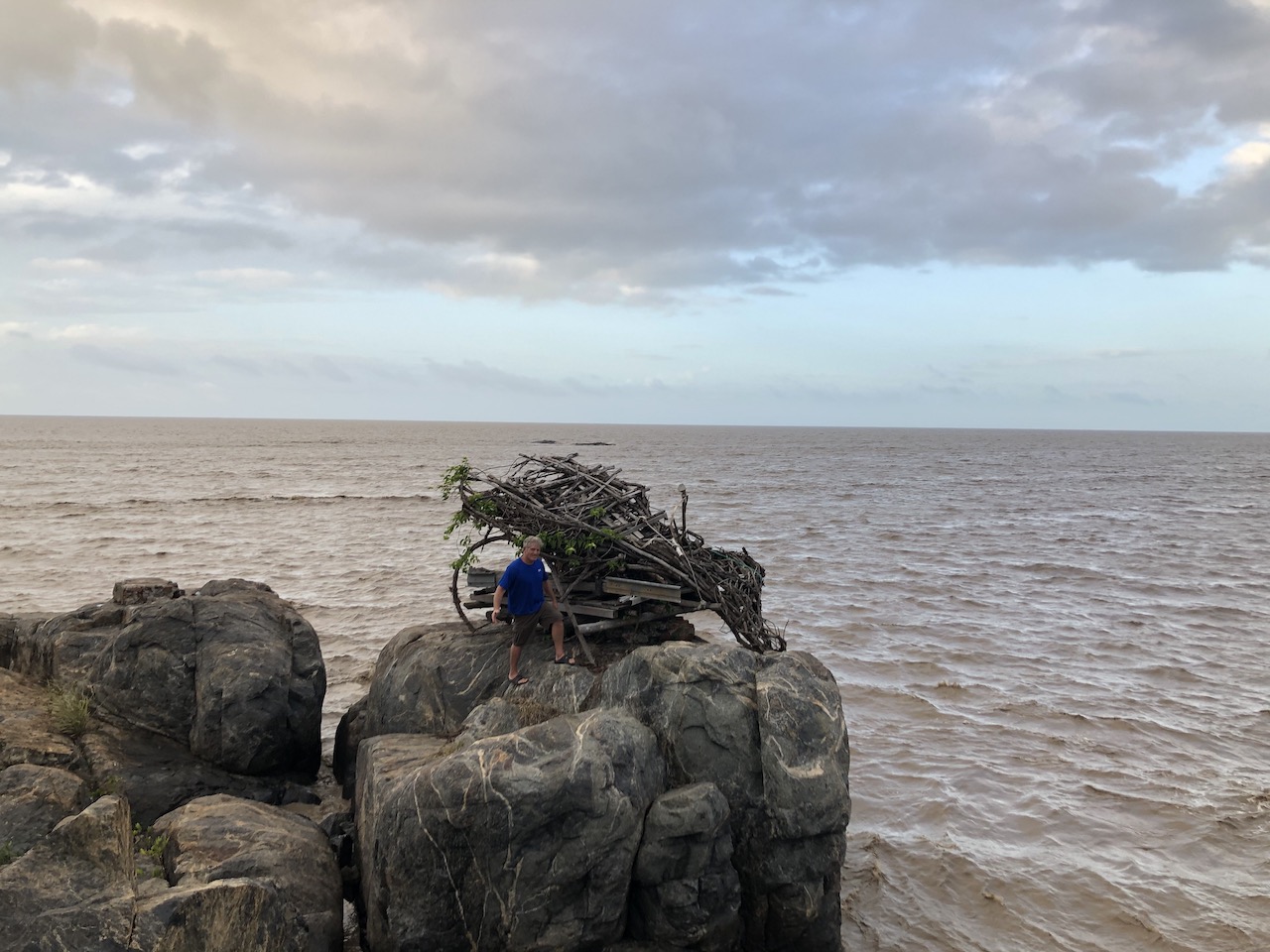 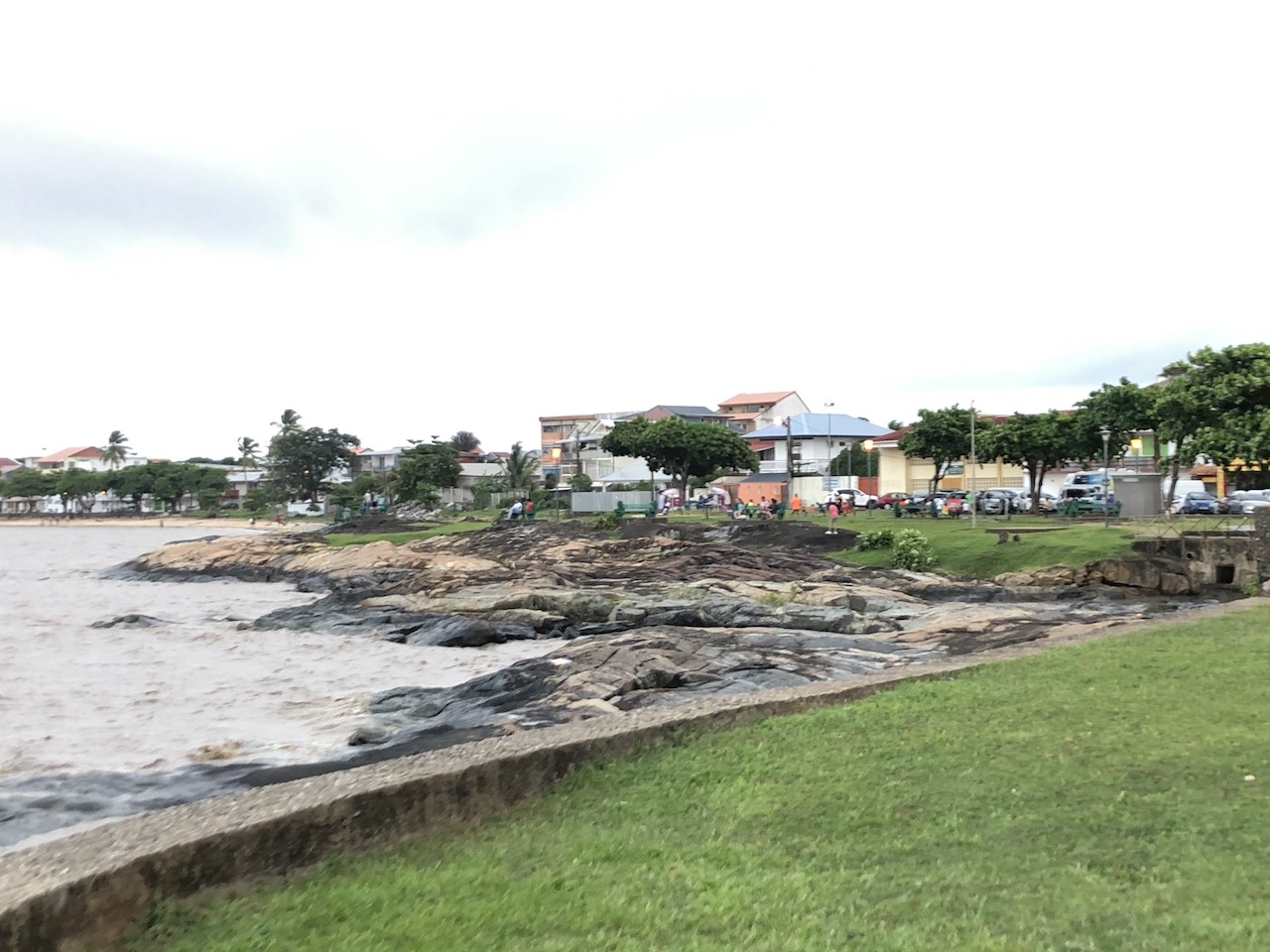 We even saw a little, discarded VW Van while we were wandering around the city. 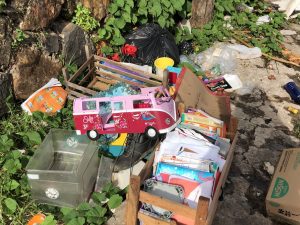 One of the “campsites” in Cayenne is at the home of a true traveler.  This man and his family have toured around South America in their cool rig.  Now they invite others to park at their place as they pass by.  Such a great way to pay it forward and a nice gesture to help travelers like us. 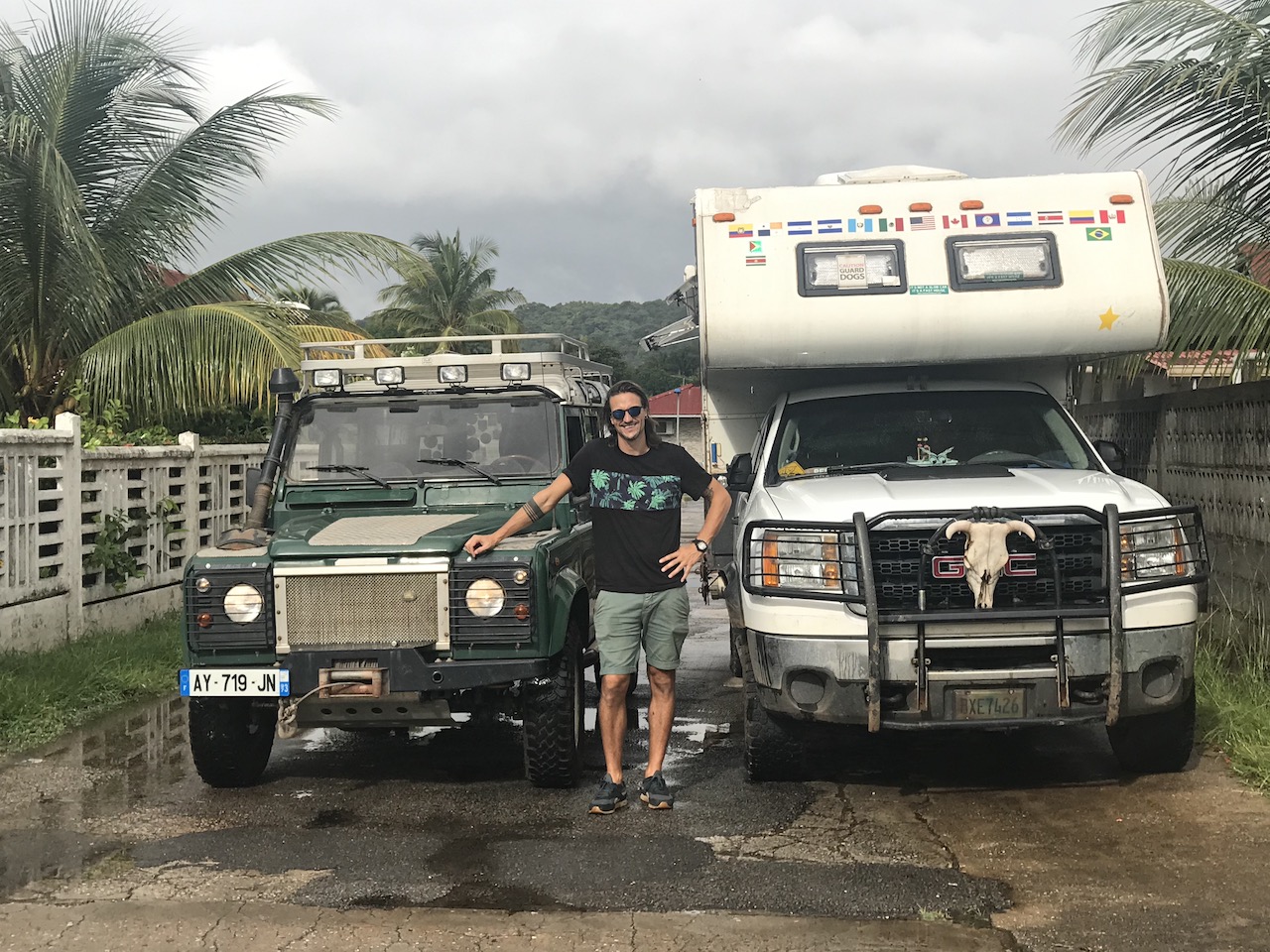 Our final exit from French Guiana and entrance to Brazil was a huge hassle.  We exited from one country, and were denied entrance to the next.  They insisted that we needed dog export papers which could only be obtained 150 miles away.  We then had to re-enter the country and spend an extra day chasing paperwork.  It all worked out in the end, but it was stressful and expensive.  So instead of documenting all that, I will end this blog post with some beautiful photos of the amazing work of Mother Nature.  Enjoy the insects, leaves, flowers, roots, fungus and patterns that I spotted as we traveled throughout this little European territory in South America.

That’s it for French Guiana.  See you next when we are successfully back in Brazil.

2 thoughts on “French Guiana- A little bit of Europe in the jungle.”