Many people mistakenly think that Guyana is in Africa, but it is not.  We entered Guyana from Brazil, South America.   The border was a plain building with a few people inside.  You may notice that the arrows are on opposite sides of what you are accustomed to.  Entering Guyana from Brazil is accomplished on an interesting, twisting road which automatically switches the cars from the left to the right side of the roadway! 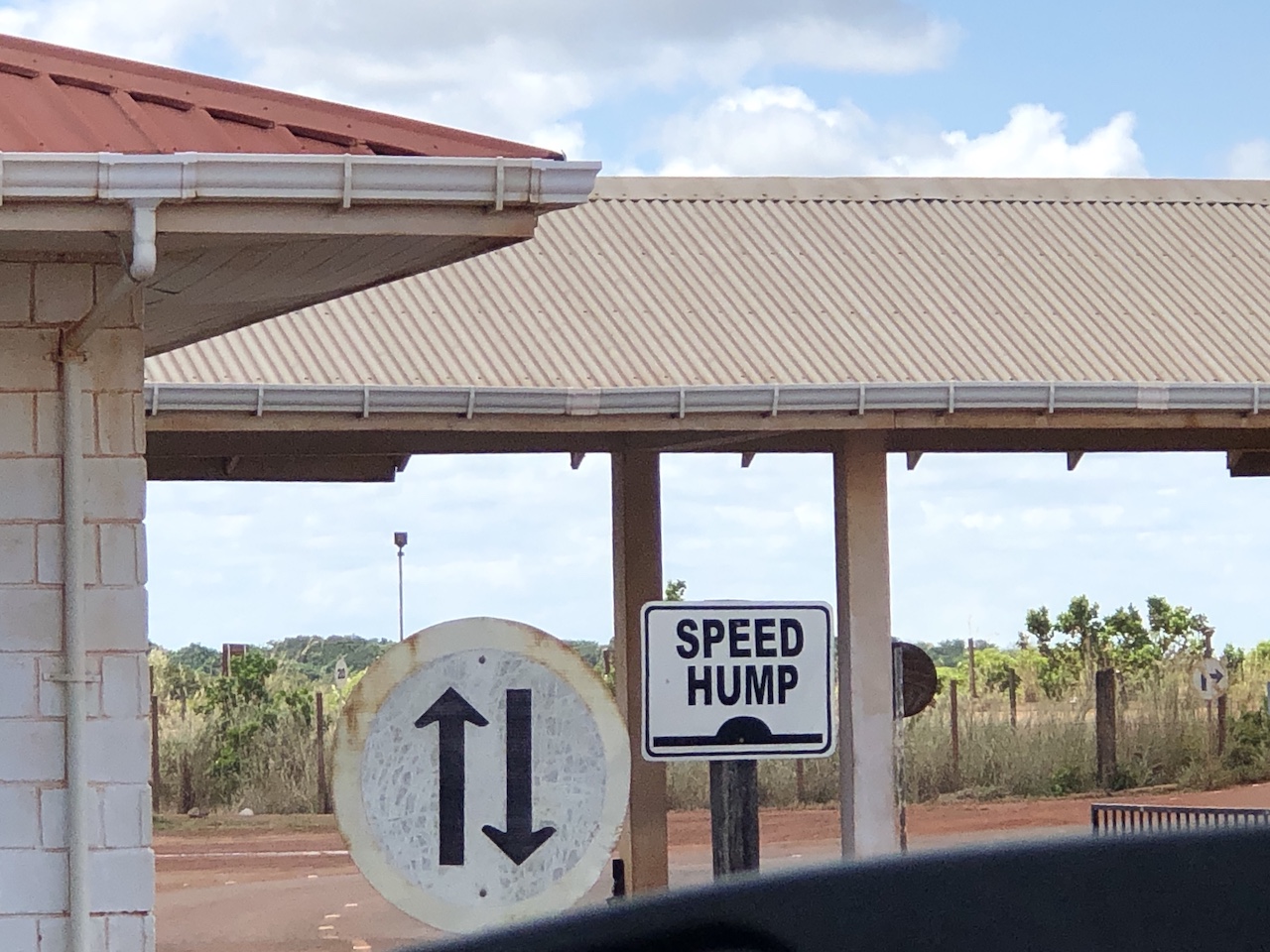 We arrived to the border on a Saturday and learned that we could not enter without auto insurance.  And of course, the insurance office is only open on weekdays.  We were stamped into the country in our passports, but our vehicle could not leave the vicinity of the border.  So we went to the adjoining city and exchanged money, grabbed a geocache and camped in the savanna just outside of town.

Once we purchased auto insurance we could enter the country with temporary paperwork for the truck.   The provisional permit granted us just three days to drive from the border town of Lethem, all the way across the country to the capital city of Georgetown, Guyana.  That trip is about 350 miles of potholes, red dust and sticky red clay. 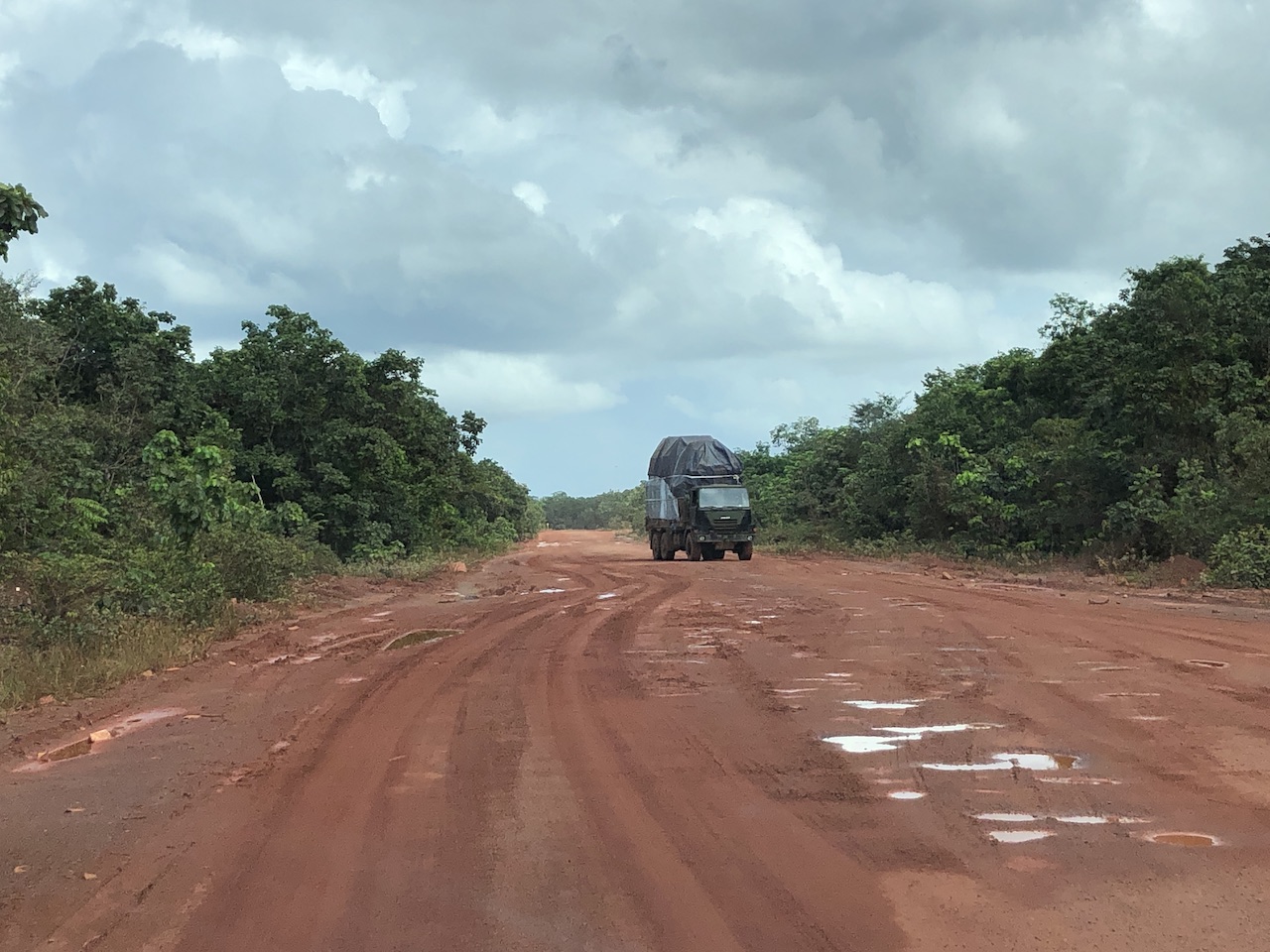 This trip takes a vehicle like ours between three and four days.  The slow speed is necessary because of the condition of the road and our rule of never driving at night meant that we had limited hours to drive.  The dogs were subjected to long hours of riding in the truck listening to podcasts with us!

There are small communities along the way where travelers can buy gas from plastic jugs, there are also police checkpoints, and a few small cafes.  We parked at one little restaurant and resupply as a campsite one night.

The yellow building is a police checkpoint in the jungle/savanna between Lethem and Georgetown, Guyana.  Everyone must exit their vehicle and present their paperwork to the authorities.  Notations are made in paper ledgers, as there is no internet or phone service along this route.  Every passport and name is recorded, never to be seen again.

Most of the people lined up there were riding in the taxi-vans that make this muddy trip daily.  They have to check in every time they pass one of these checkpoints.  (there are three along this stretch of road) 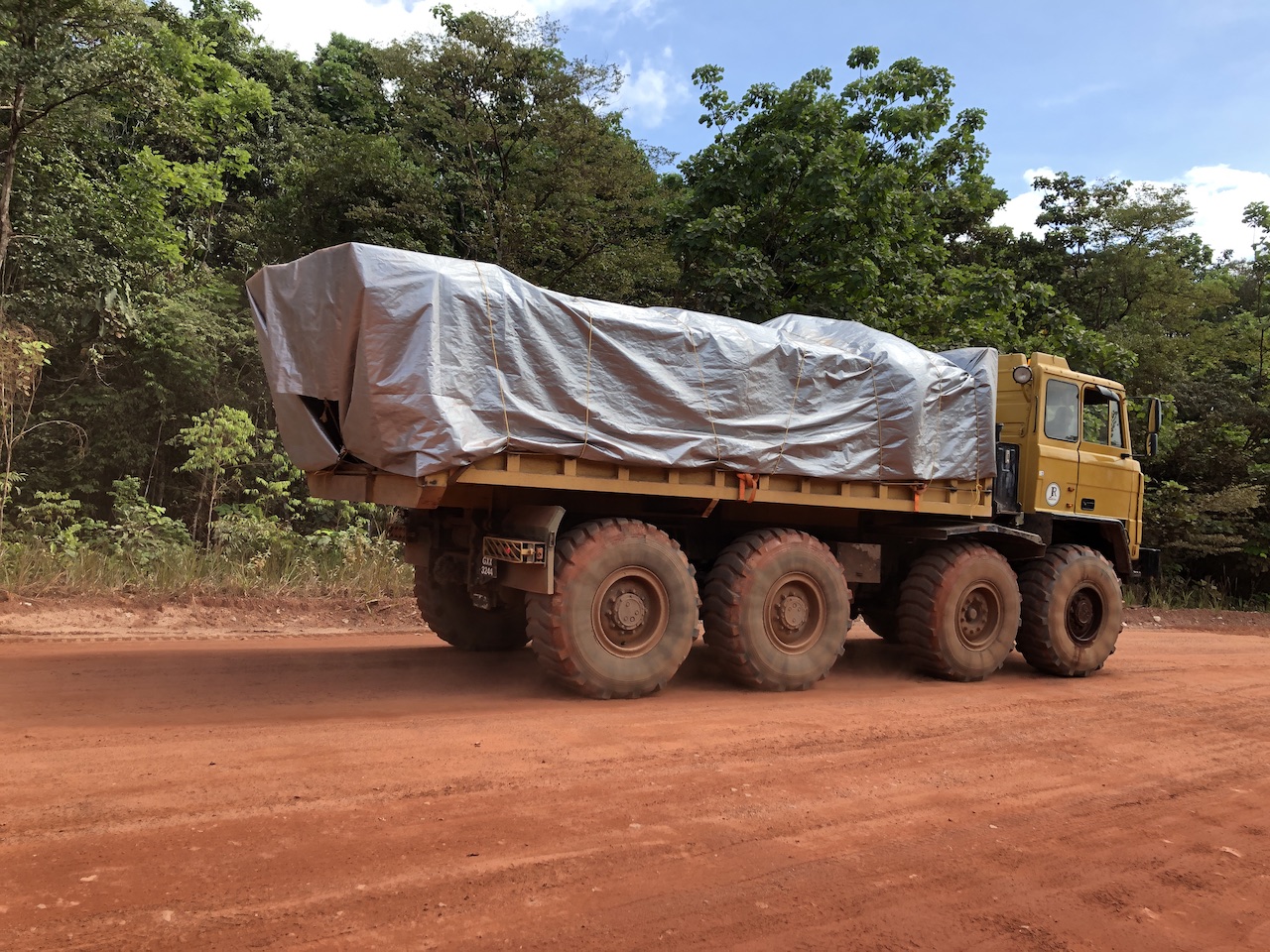 When we arrived in Georgetown we found parking for the night at the fairgrounds and then handled the paperwork requirements for the vehicle.  It was quite simple, but time consuming.  We also dropped off laundry and did some grocery shopping.  We found a very nice store similar to Target and even a Hard Rock Cafe!

While talking to locals we learned that Guyana has discovered off-shore oil and they are working hard to develop their economy to support the needs of that industry.   Shell Oil has their claws in deep already.   It will be a long process for this little country,  as they still struggle with their history of British rule, a strongly divided class-system and a high level of poverty and related social issues.

Walking along the beach area in the center of town we encountered huge amounts of trash.  The ocean water is murky brown and the sand is riddled with all variety of single-use plastics and discarded garbage. 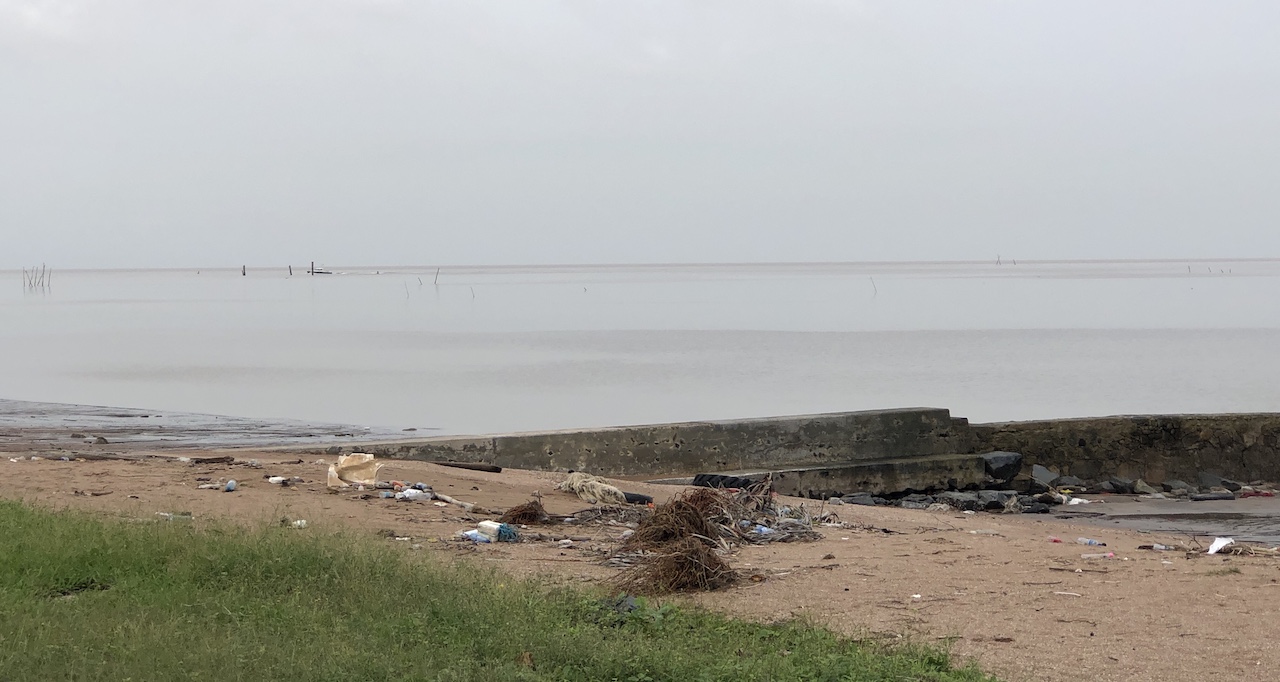 We met a homeless man who is living under a tree there.  He told us a story of his family-owned fishing boat being hit by an oil ship.  Two of his children were killed and his wife and child are in the hospital running up bills he can never pay.  He tossed the tennis ball for Nica as he unrolled his story of sadness, never asking for money, help or pity.   He is a Hindu, and views this whole incident as his fate or karma.

Guyana is smaller than the state of Arizona.  The population is less than just one county in Arizona.  The people of Guyana are predominantly Hindu, Christian and Muslim religions.  The country was built on sugar cane production and the native people (called Amerindians) were the first slave workers.  Then later when they escaped back to the jungle, British ships delivered slaves from Africa and India to work and manage the farms.   Much of this class system still seems apparent today.

We learned a few things while we were in Guyana.  One of the trees we saw frequently bore a beautiful, red fruit.  We learned that this is a cashew tree.  The red fruit has a sweet edible flesh and the cashew nut grows out of the bottom of the fruit.

We also experienced a little bit of the language barrier of Guyana.  The primary language is English.  However, there are many sub-dialects that have an islander-style lilt to them.  Then there are Creole variations, and the various Indian tongues.  And each of the indigenous or Amerindian tribes has a different language.  Fortunately we were able to communicate primarily in English throughout our visit.  But there was this conversation……..  (turn up your volume)

And of course, a spelling error (or is it errior?) adds more to the confusion of the English language. 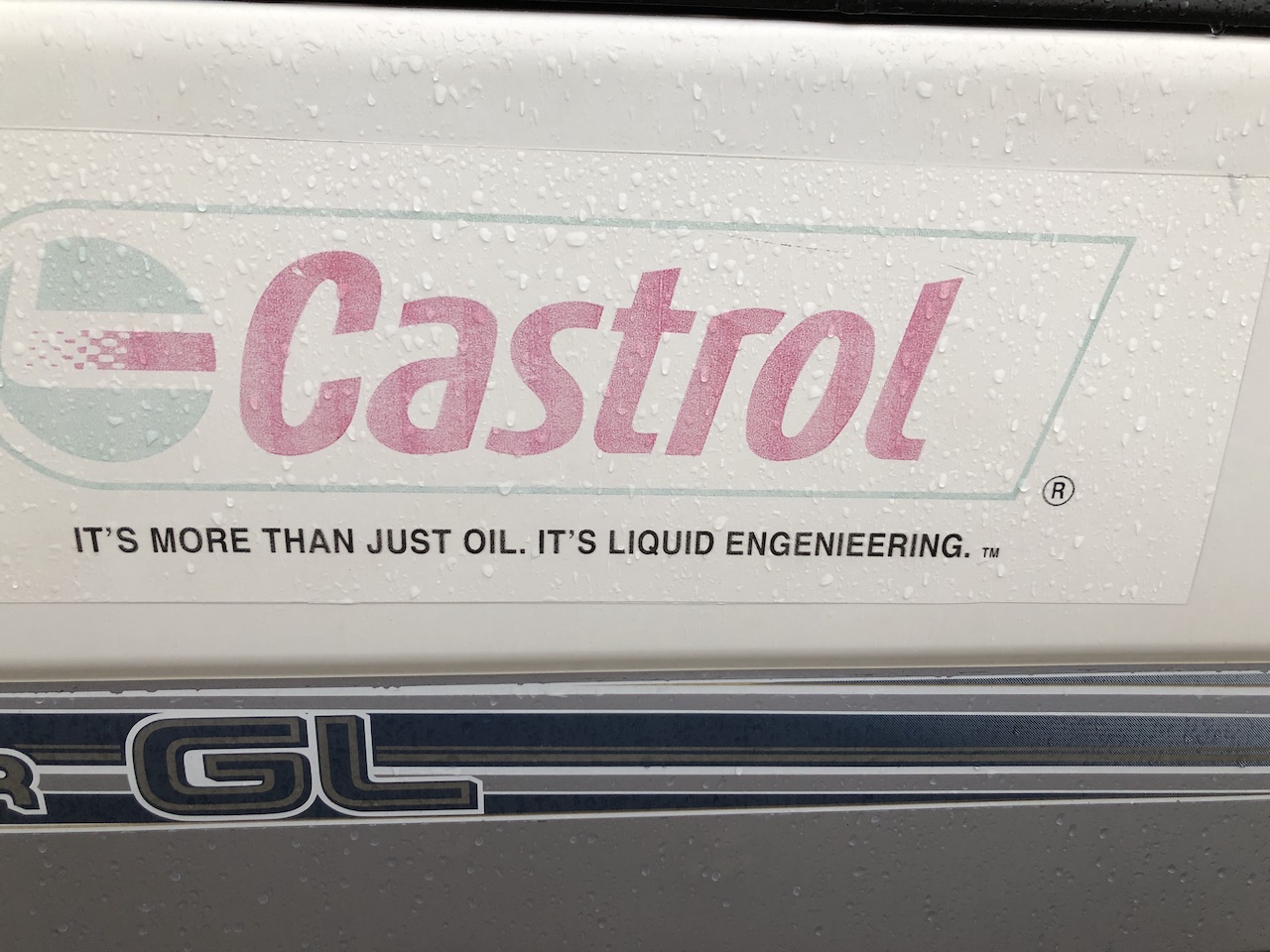 We camped a few days at the beach enjoying the fresh breezes from the murky ocean.  On Sunday, many others came to enjoy the beach, too.  We say carloads of families with booming base speakers in the back seat.  We saw a small herd of sacred cows strolling the sand.  We saw our dogs getting gritty and wet.  We also saw an eagle and a white ibis in the nearby brush. 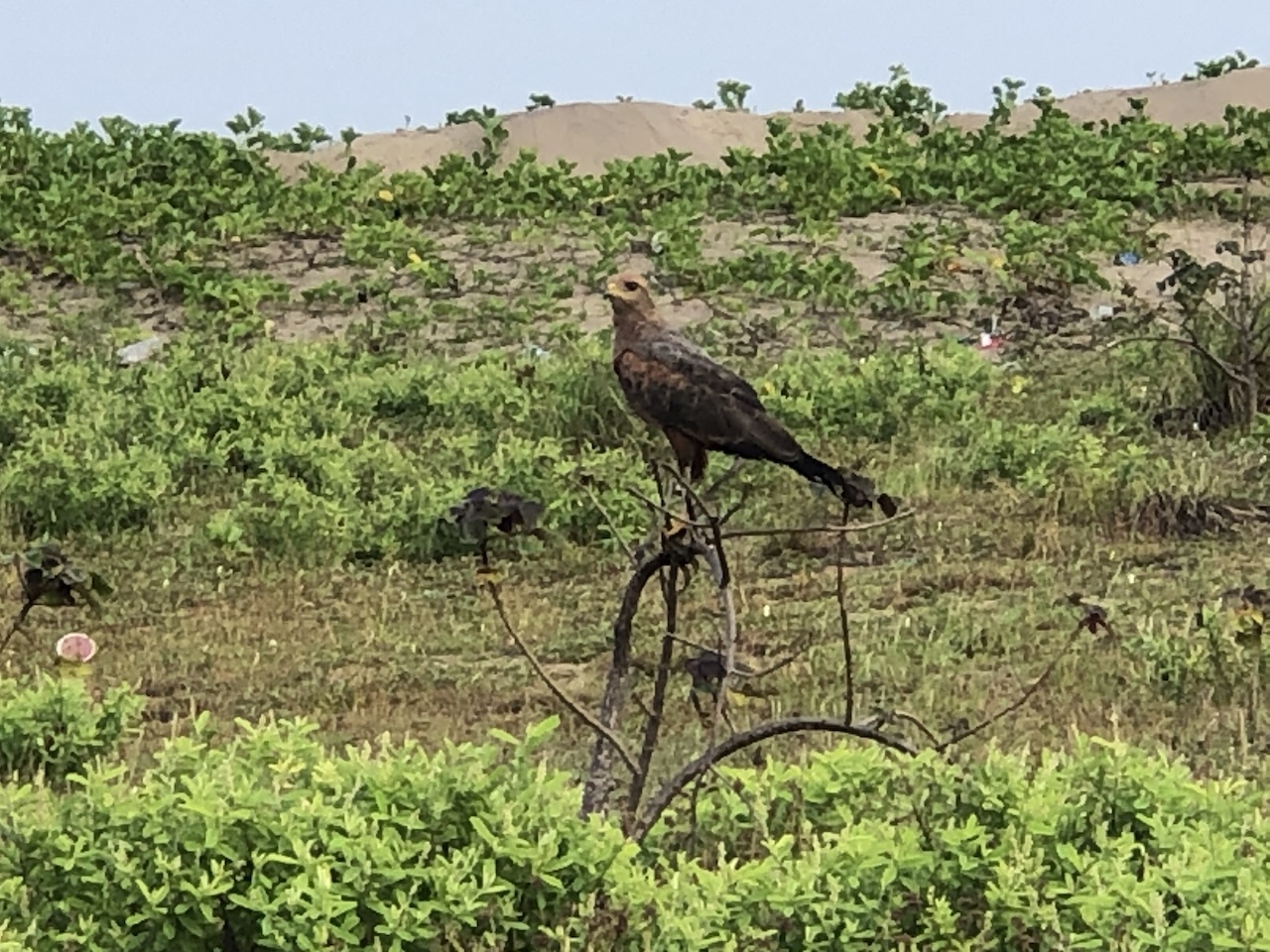 We spent a hot, muggy and buggy night camped at an irrigation control station.  The frogs and birds were loud and the sky was gorgeous. 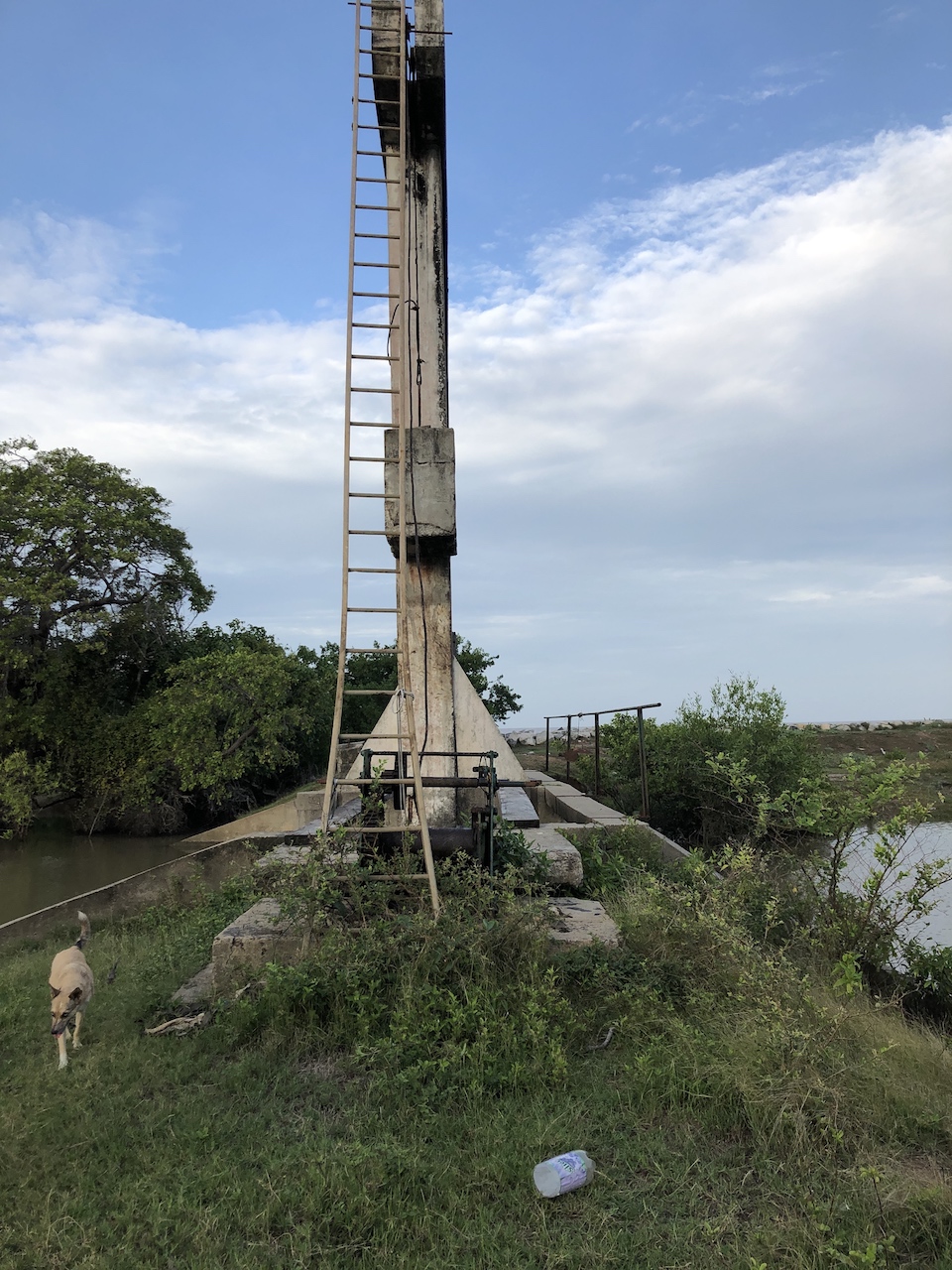 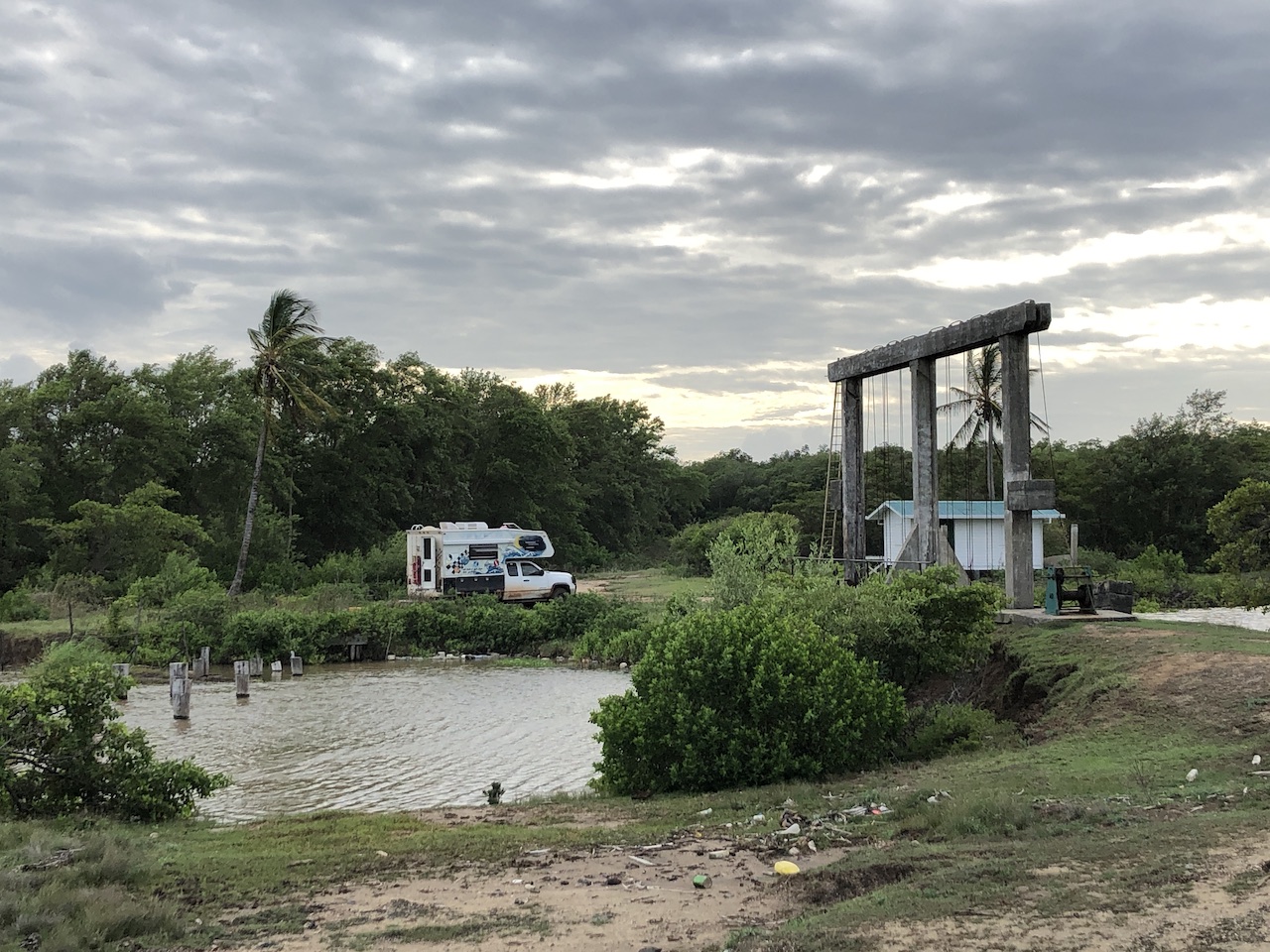 But after less than two weeks we felt that we were finished exploring Guyana.  So we crossed the big, floating toll bridge and paid the ridiculous fee for our weight.

At 5,460 kilograms we were charged about $85 US Dollars to cross the bridge.  Then we drove to the Suriname ferry.  The river is the border between Guyana and Suriname and the ferry (or an airplane) is the only way to cross the border.

They don’t see many overlanders in Guyana, so there is a great deal of curiosity about our travels.  Mike had a great time chatting with the other ferry passengers and the workers while we waited for our boat to arrive. 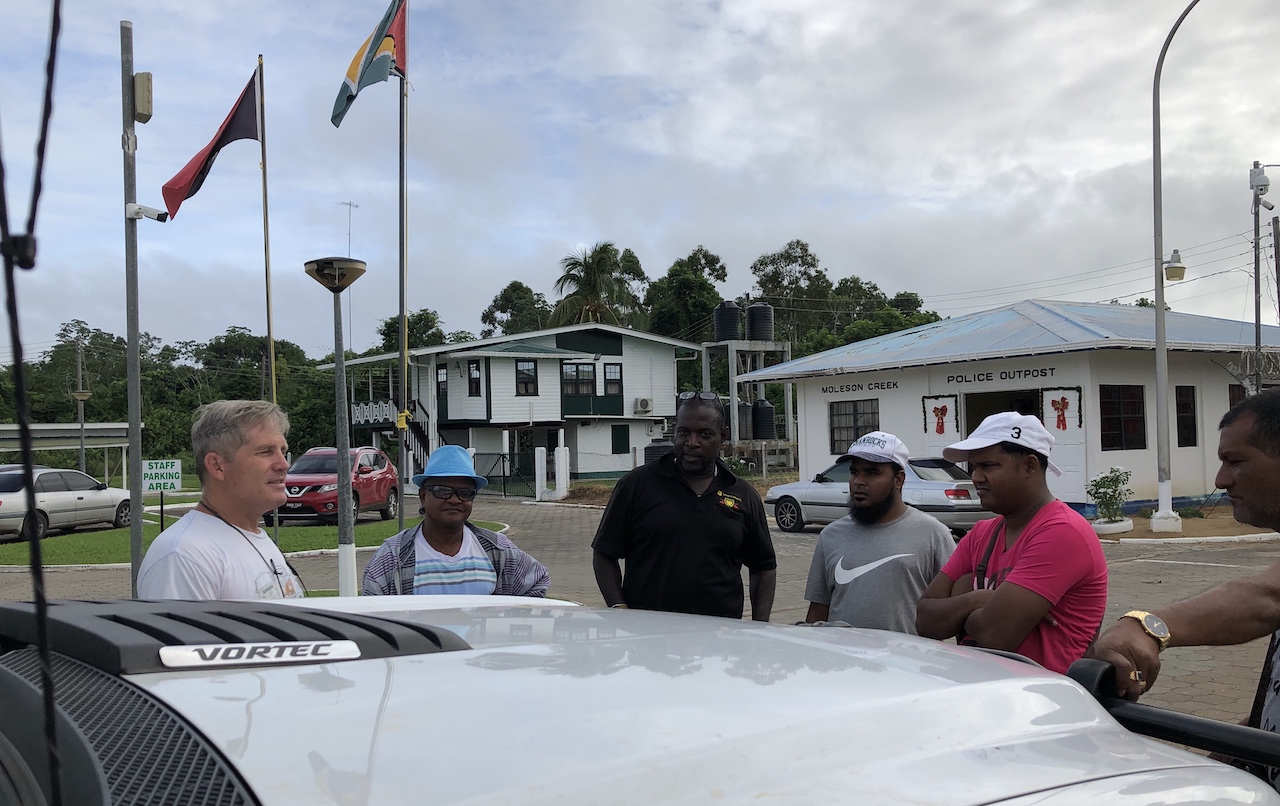 This was our last stop in Guyana.  When we drive off the ferry we will be in Suriname.  Can you find that on a map?  Do you know the political, religious and governmental history?  Get ready, here comes Suriname.

3 thoughts on “Guyana- Is that even in South America?”