After leaving the Colca Canyon loop we stopped in a small village and camped near the beautiful cemetery.   It was a peaceful spot and the neighbors were very quiet.

From this location, a section of the Inca Trail leads to the ruins of Raqchi.  These ruins can also be reached by car, but why drive when a hike is available, right?  So we packed up supplies for us and the dogs, and headed off down the Inca Trail.

The trail is lined by rock walls to help prevent flooding.  In some sections the walls are still standing after over 500 years of weather and earthquakes. 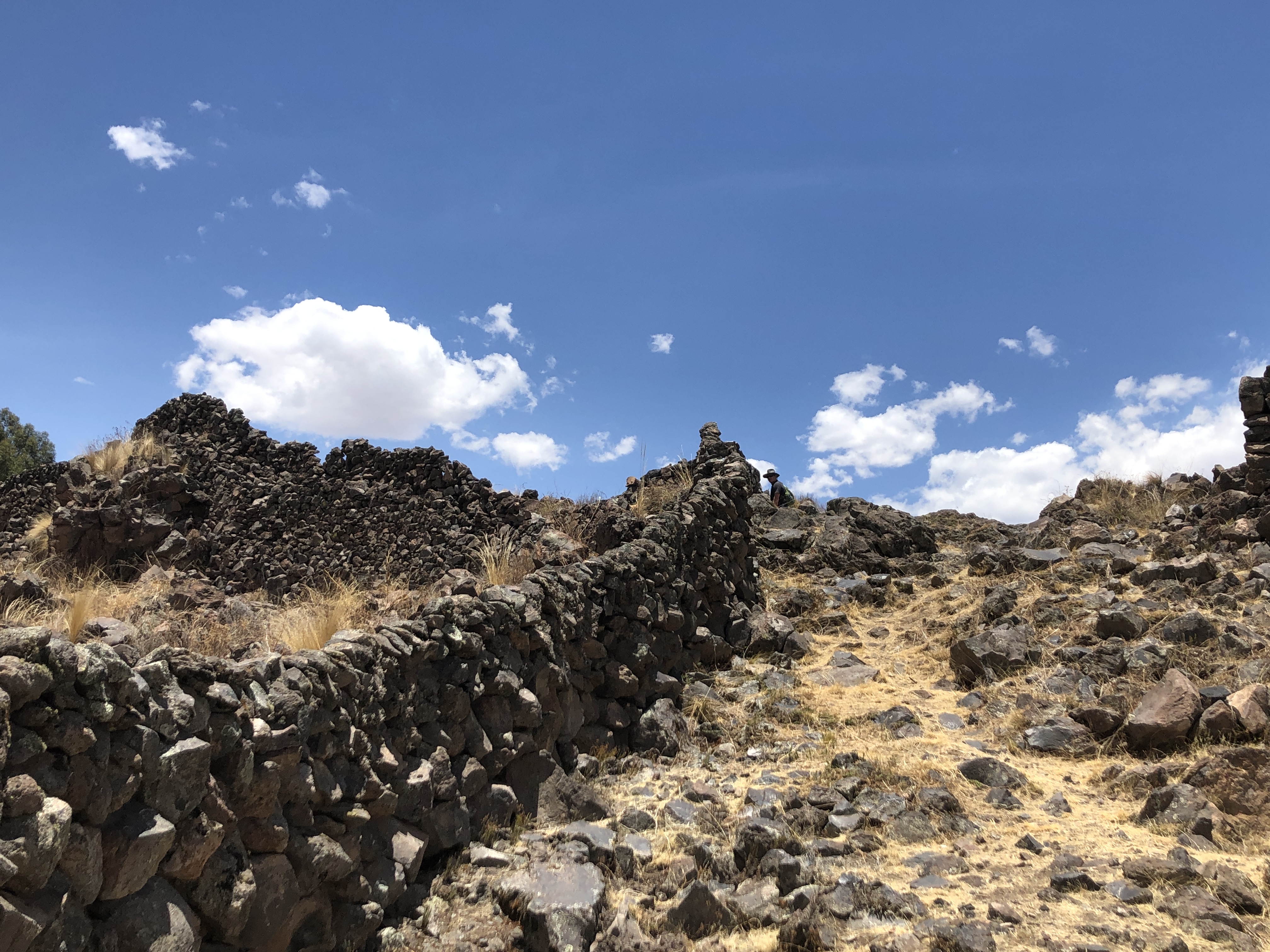 As we got closer to the ruins, the trail became more clear and vivid.  This section of the trail has been maintained by the Peruvian cultural authorities.   It is a part of the experience of touring Raqchi Ruins. 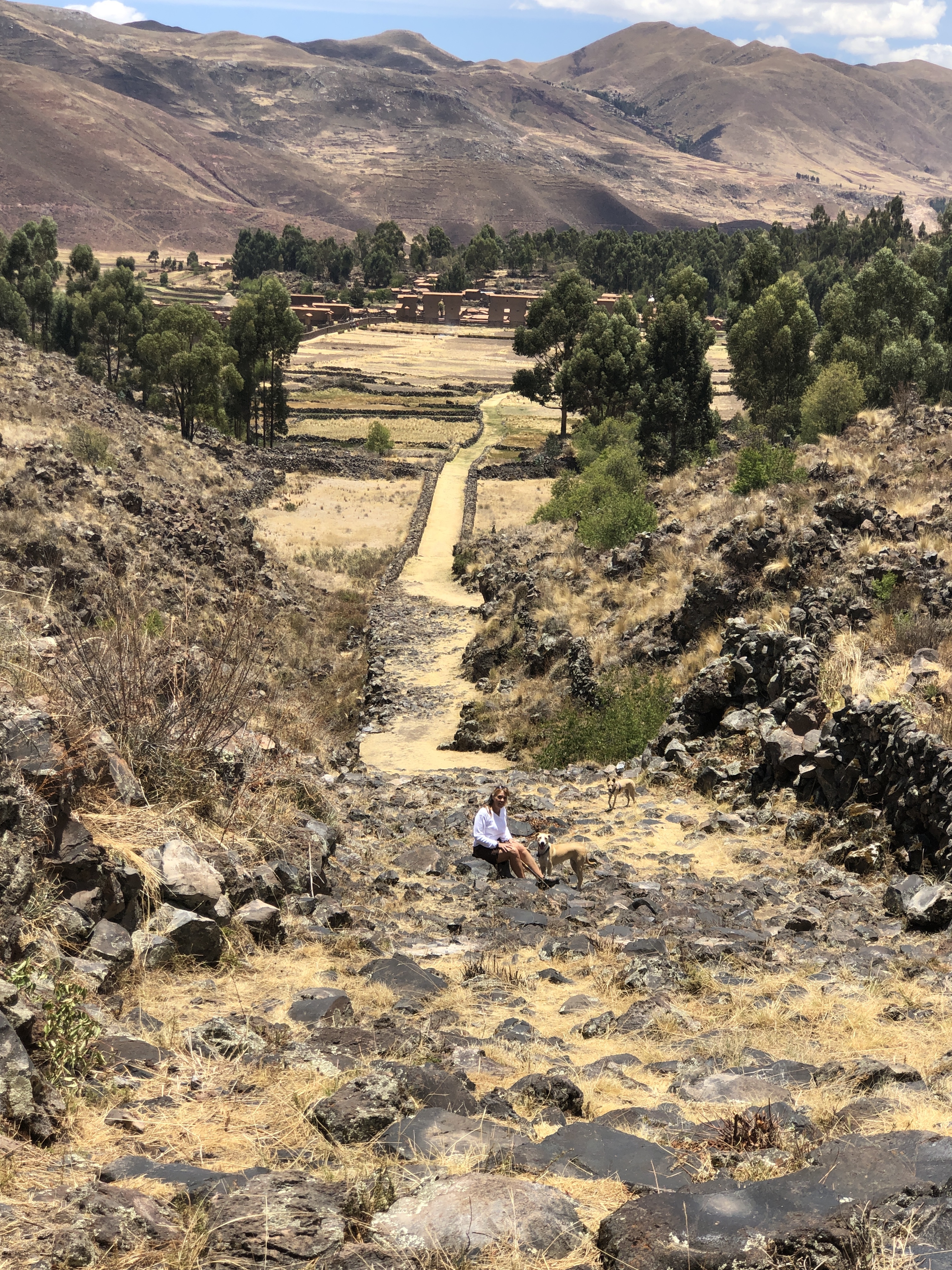 Then we passed the city walls.  These stones are stacked over 5 feet high to indicate a clear delineation of the city of Raqchi.  There were guard posts at each location where the Inca Trail passed through.

Inside the walls of the city we explored the extensive ruins of Raqchi.  This city had a large, three-story structure which was likely a combination of a temple and a boarding house.  Travelers along the Inca Trail might stop here for rest and worship.

There are many small buildings around this one which were probably housing for the workers and also food storage.  Evidence shows that large amounts of food were produced in the surrounding hills and stored in rock buildings here.  Food would have included grains, gourds, legumes, potatoes and also salted, smoked and dried meats. 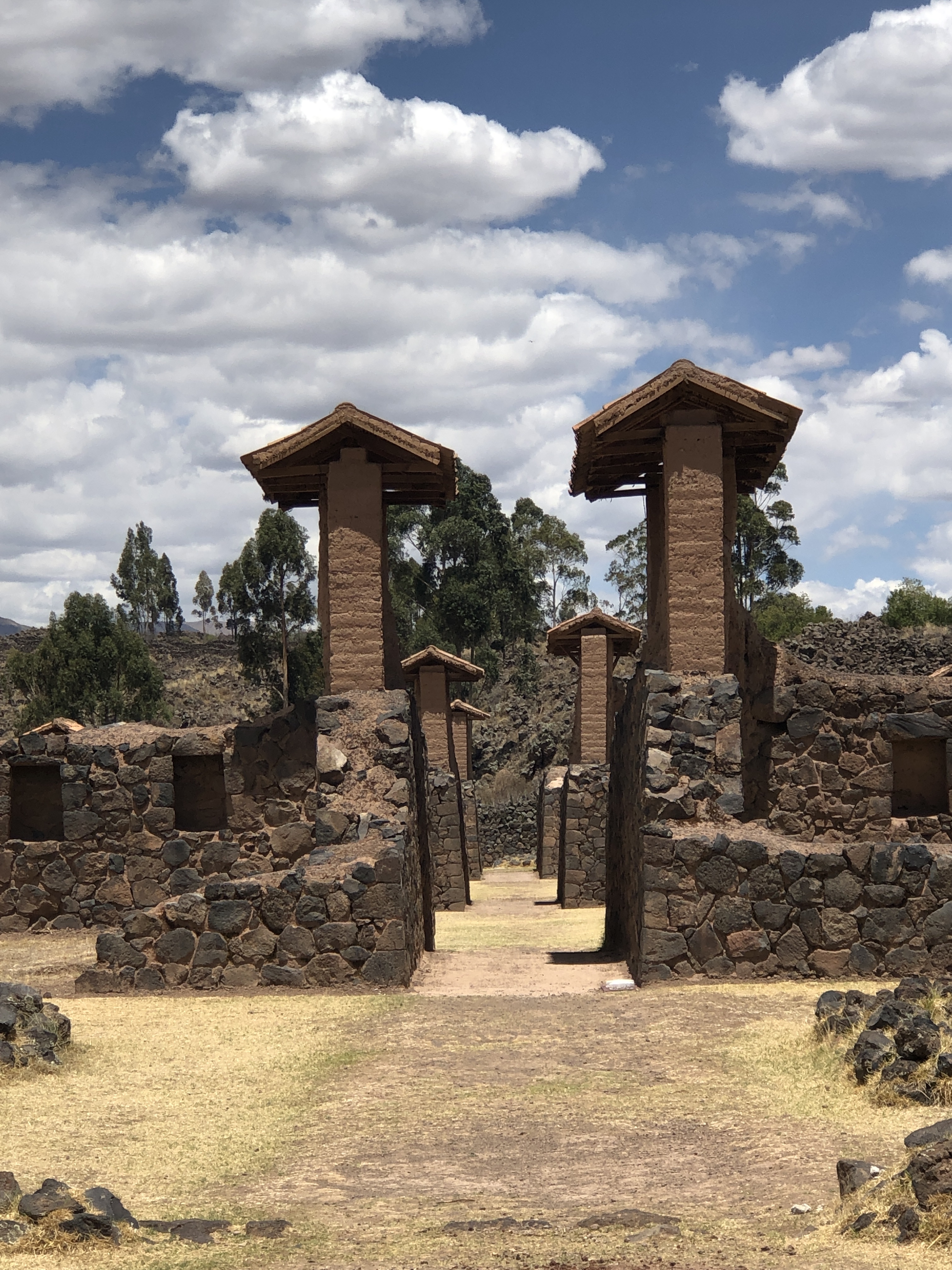 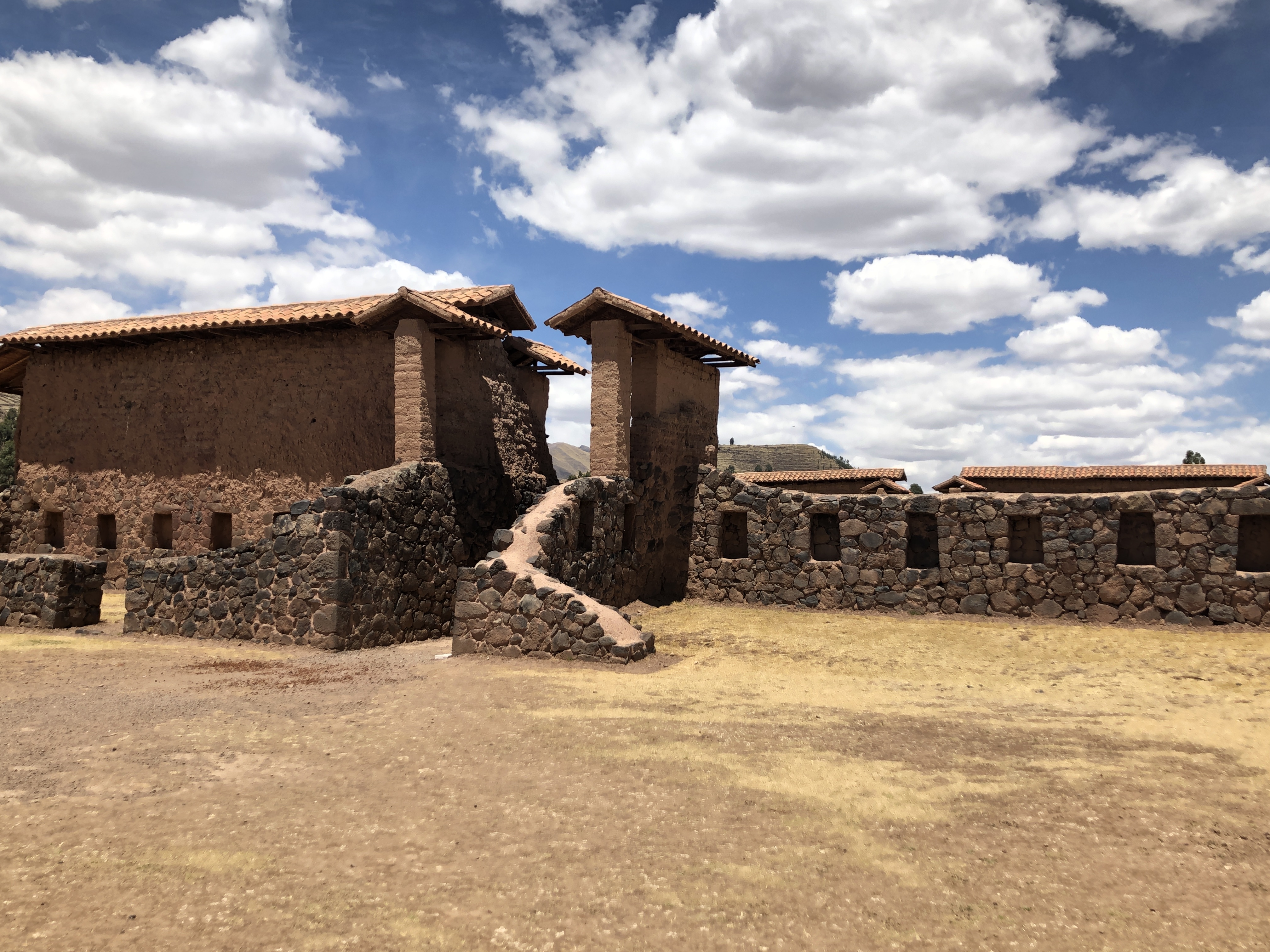 There is very little known about this area.  But the construction method is considered unique, and particularly strong.  The rock wall base, with adobe mud upper has withstood the test of time.  Much of this city was destroyed by the Spanish in a show of strength and destruction.  Yet these walls remain to give us a glimpse into the history and significance of the city of Raqchi.

The dogs cooled off in the shade while we roamed through the ruins.  They relaxed on a comfortable bed of straw.  And watched ducks paddle around the nearby pond.  This city even has a natural spring and a bathing area. 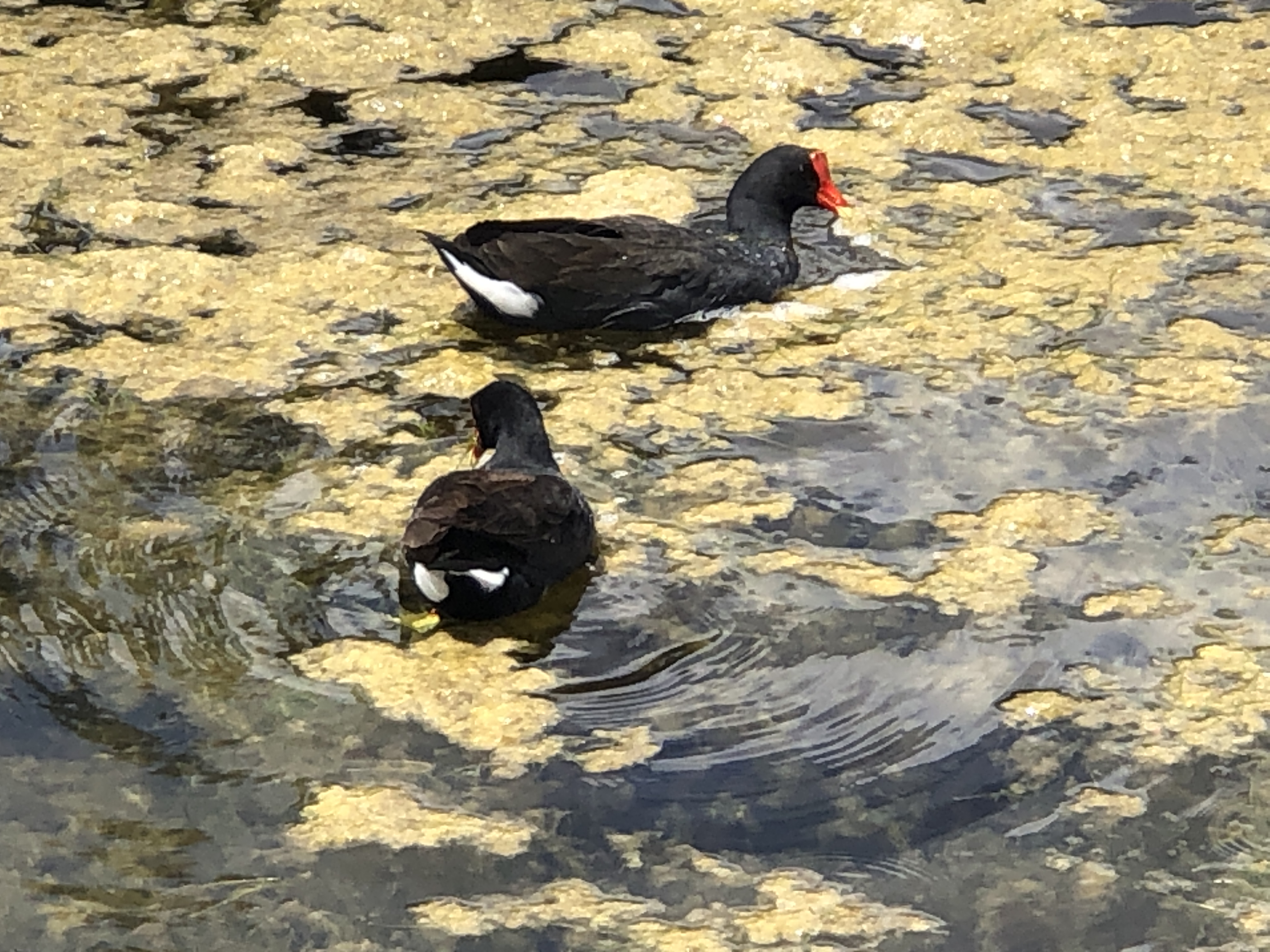 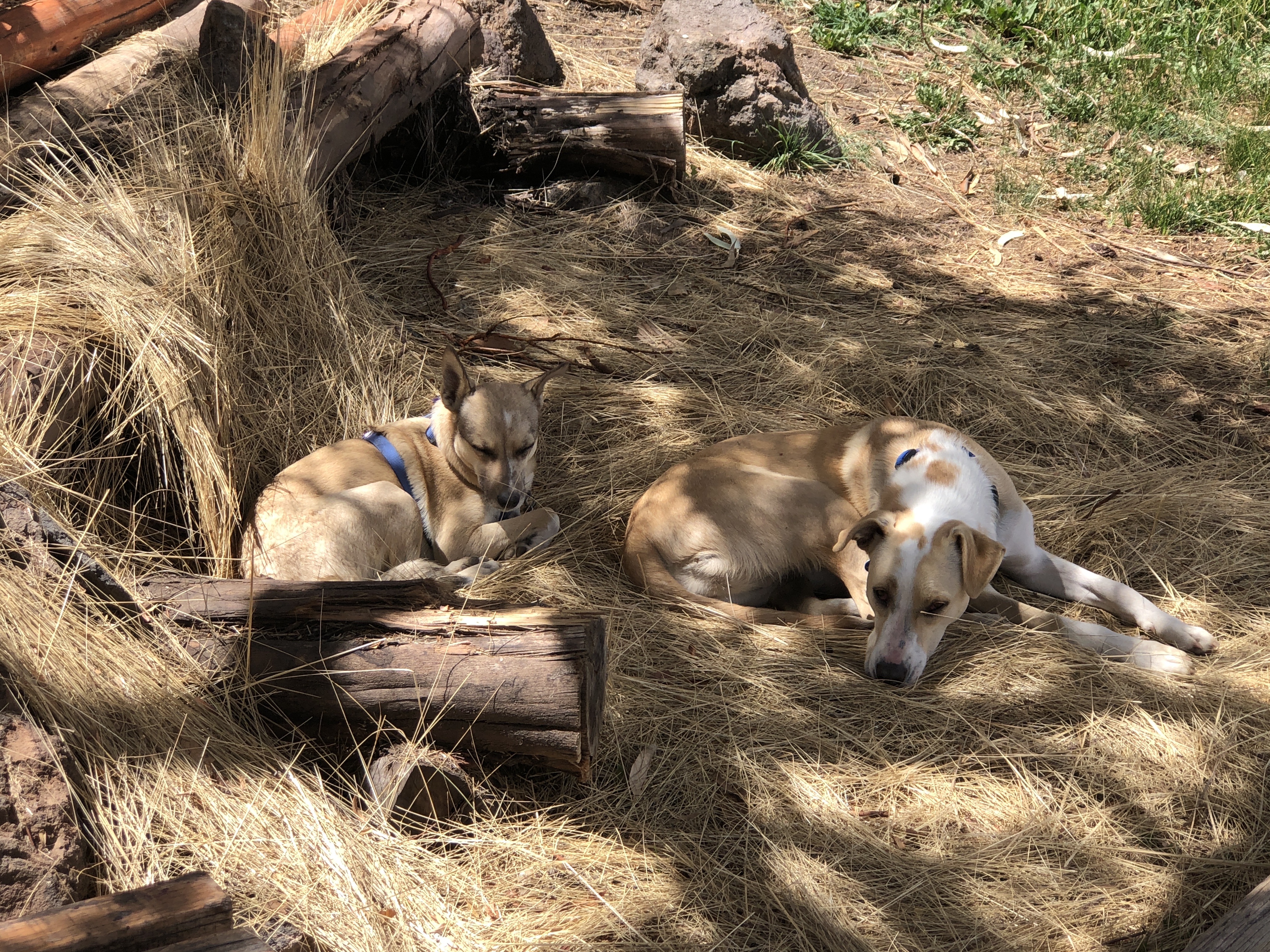 When we were finished we all headed back down the Inca Trail out of town.  The walk back to the truck would take us at least two hours.  And it was the heat of the afternoon.

At one point the heat (and possible pending illness) was too much for poor little Nica.  She was just exhausted.  So we wrapped her in a sling of fabric and Mike carried her for the last leg of the hike.

It was a terrific adventure for all four of us.  We learned about the city of Raqchi and also about the Inca Trail.  There are trails like this all over this region of Peru.  It is said that all roads lead to Cusco, the belly-button of the Inca Empire.  We are headed there soon, too.  Are you coming along?

Remember to sign up to receive these updates in your email. 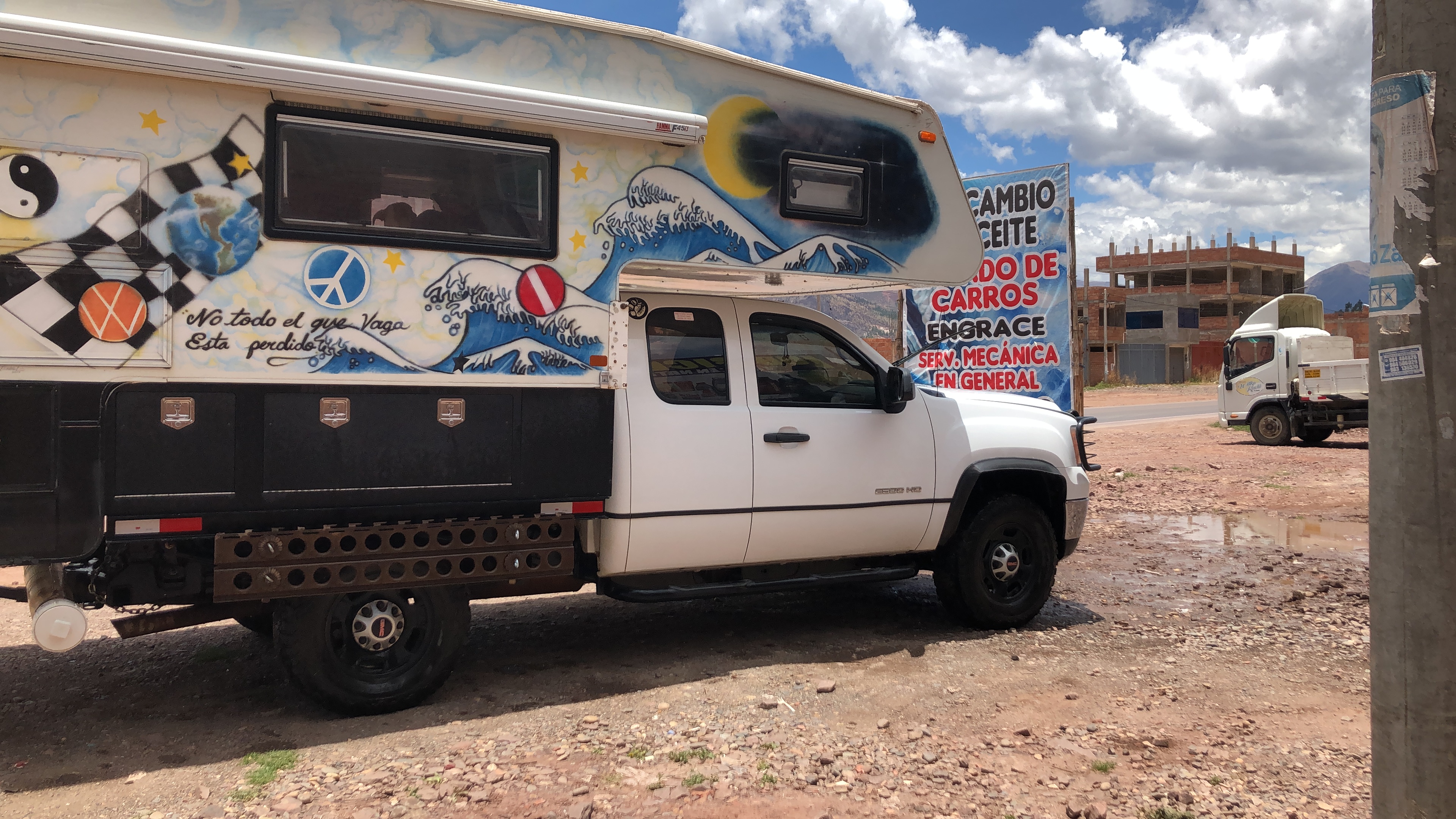 2 thoughts on “Peru- A section of the Inca Trail”