We actually passed through Lima several times in our loops around Peru.  The prior two visits were filled with touristic fun and exploration.  But during this visit we had some other business to take care of, along with our fun stuff.

One day in Lima we parked on the beach and had lunch while Nica explored the shoreline.  Did you know that Lima was built on a cliff over the sea?  Much of the city was completely destroyed by storms and has been rebuilt several times. 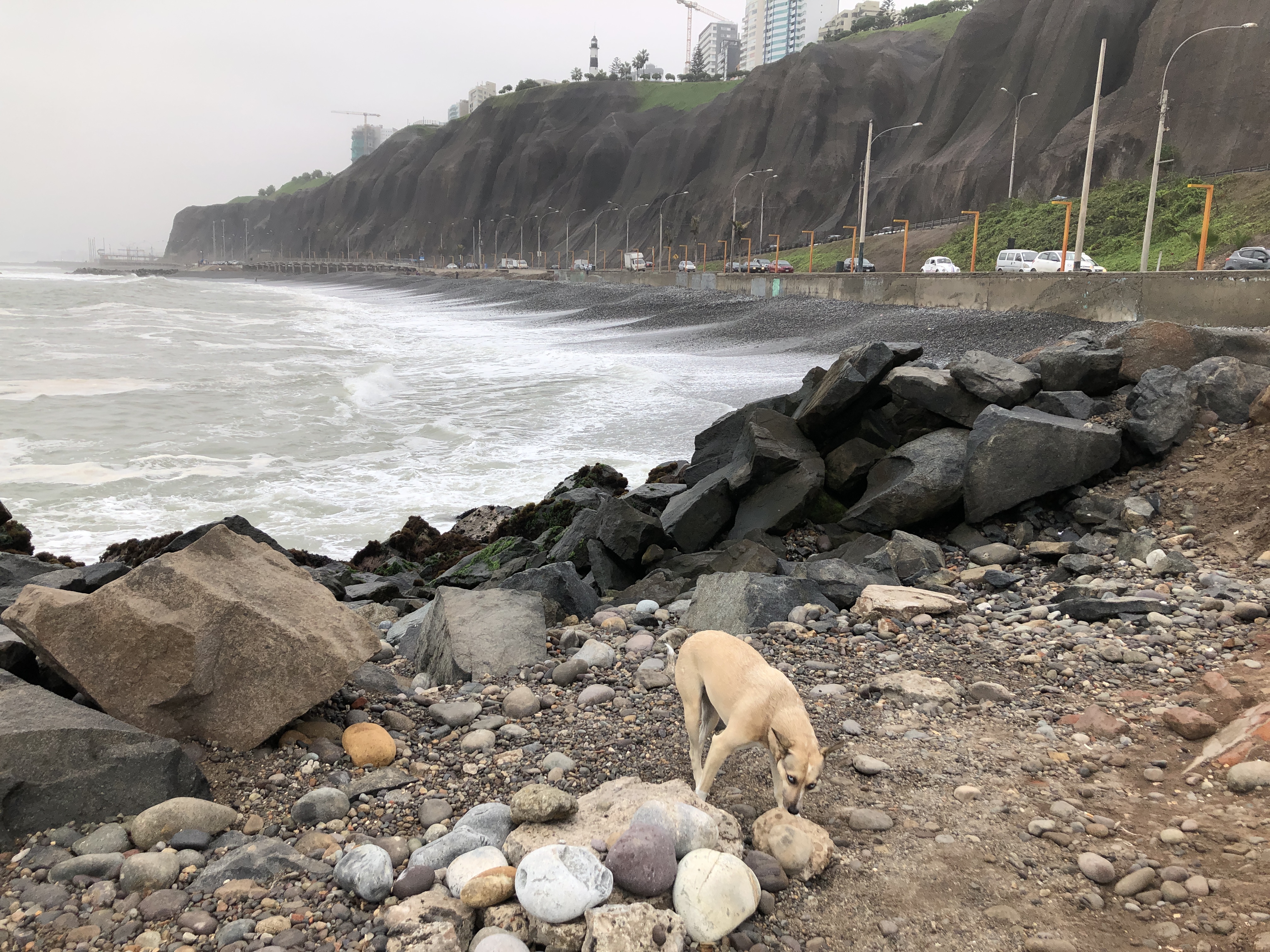 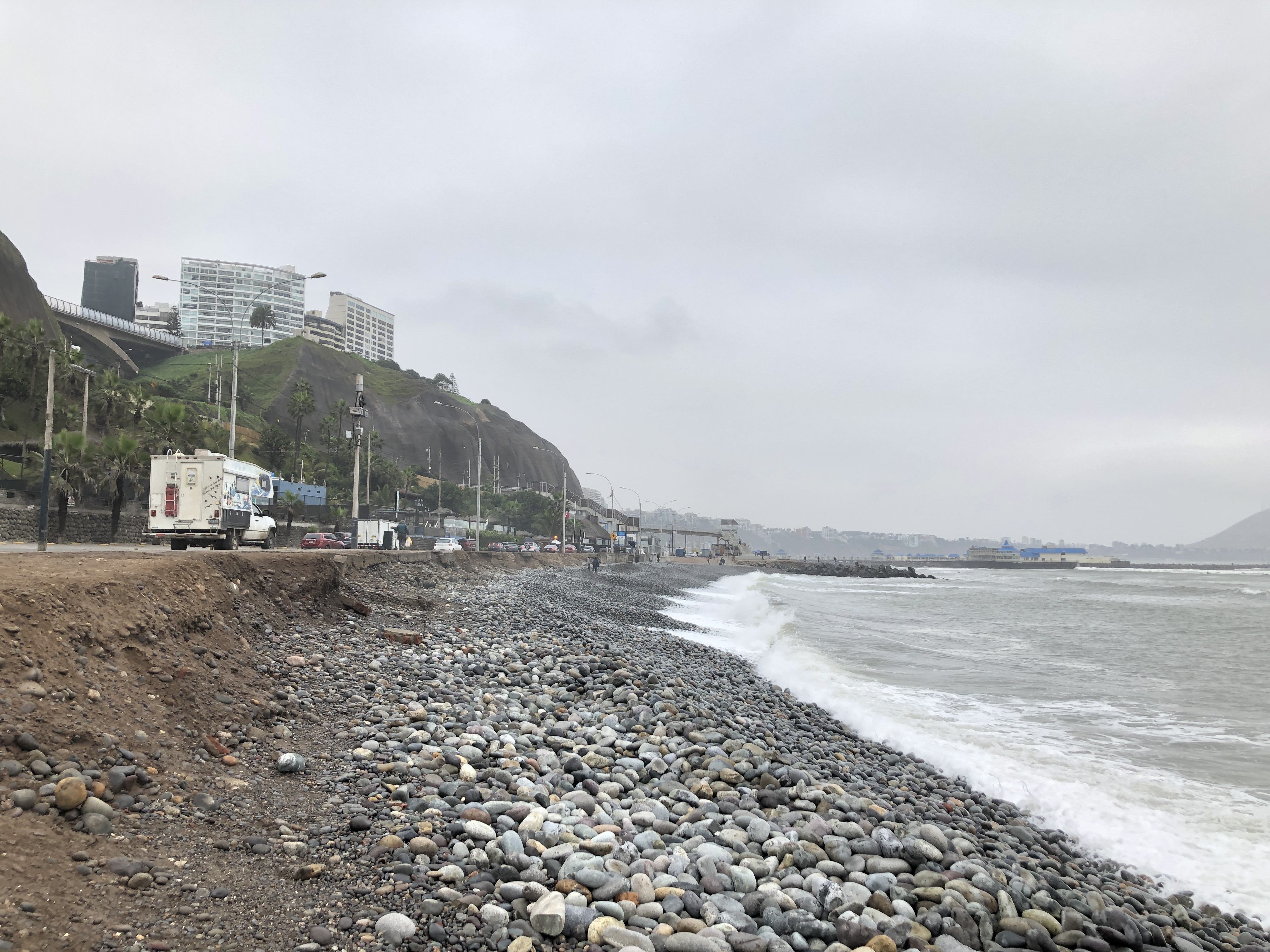 We also spent a day taking care of some needs at a shopping mall.  It was a challenging shopping trip, as the entire country was caught up with watching the finals of the Copa Americana.  This is a HUGE soccer contest and the final game was between Peru and Brazil.  That made for a heated contest demanding a lot of attention.  You can see the shoppers and staff in these photos are engrossed in the game.  Customer service was non-existent. 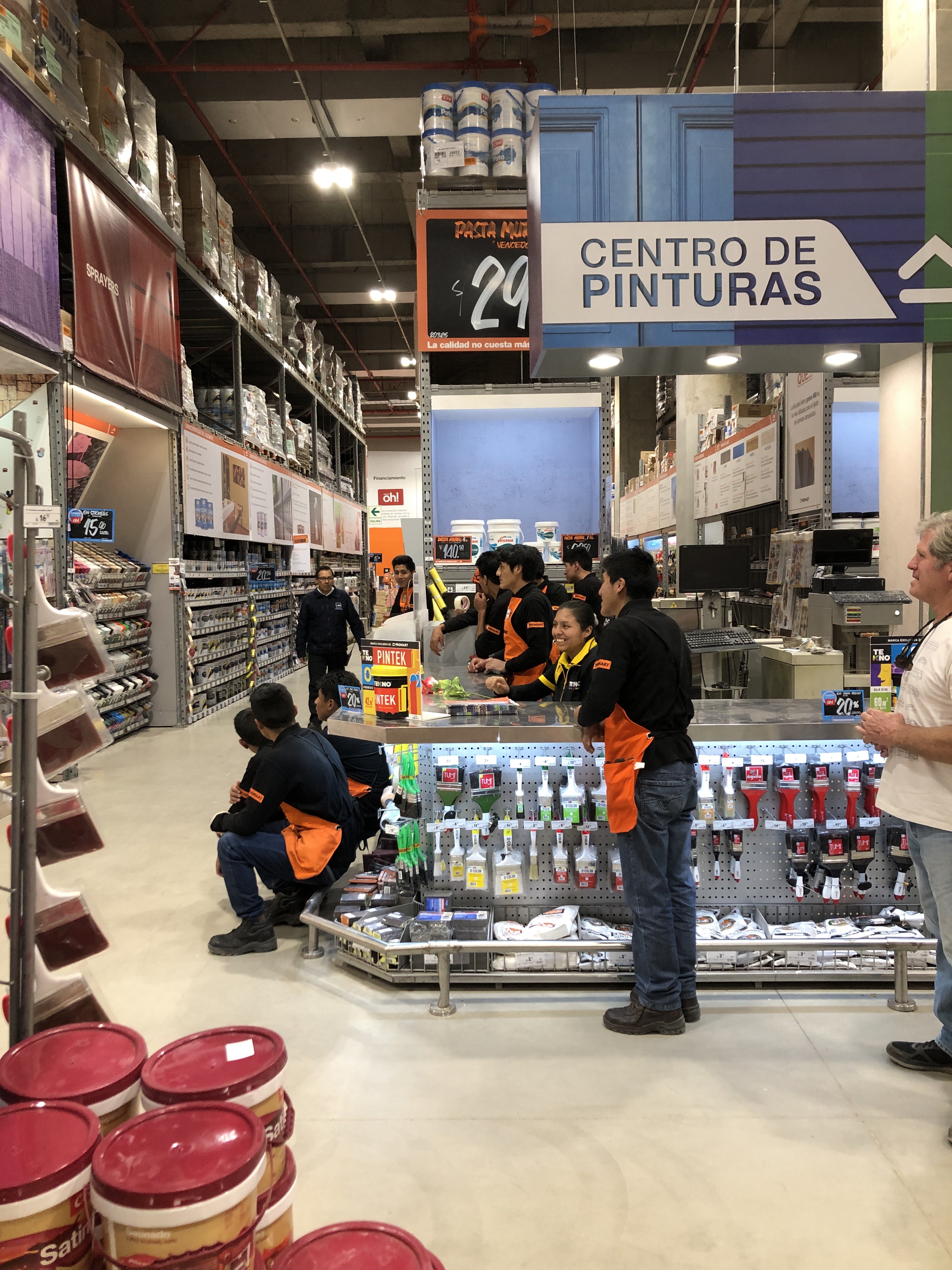 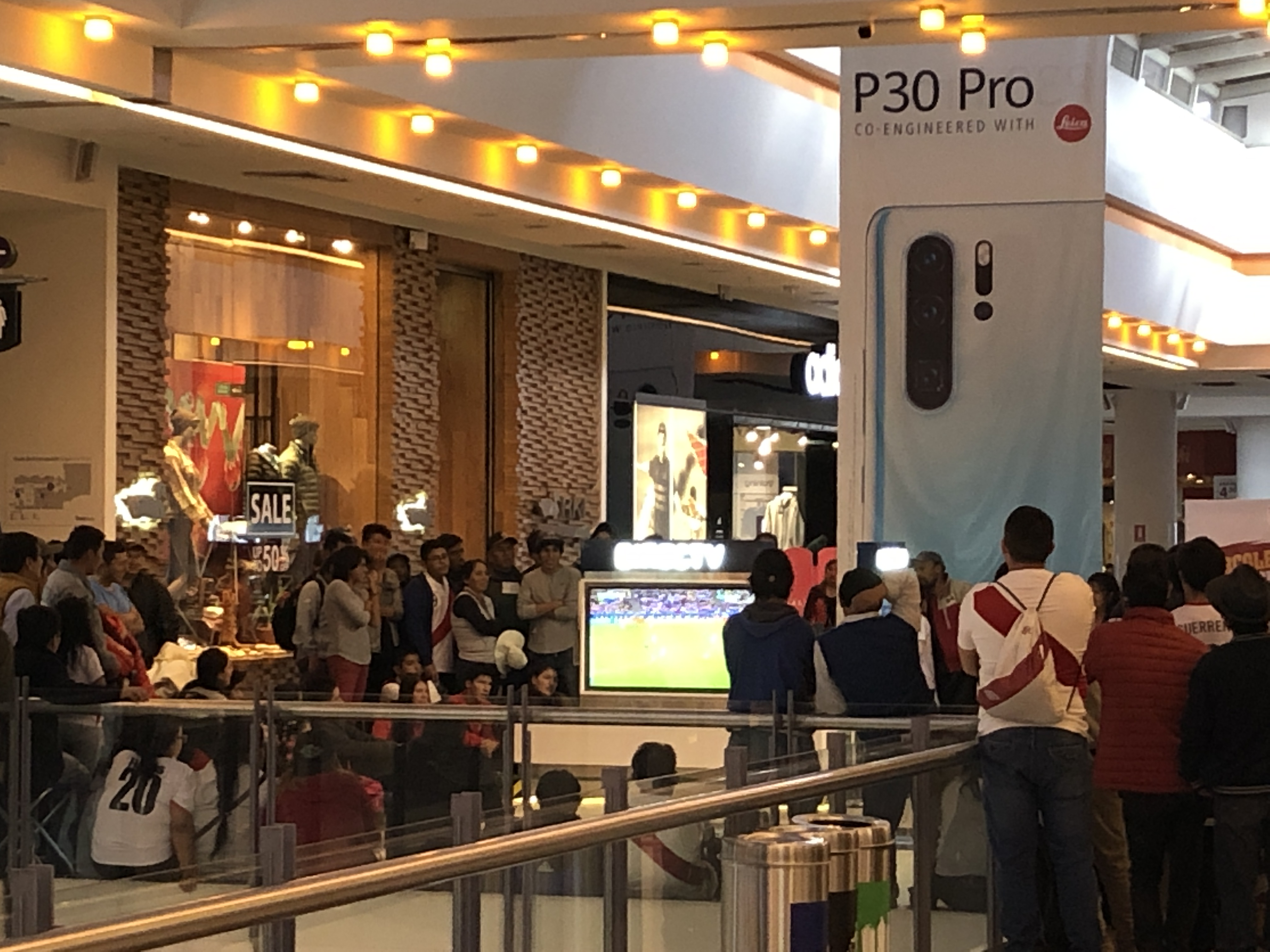 Since everyone was busy watching the game in the various shops, it almost felt like we were alone in the mall.  So at one point we stopped and had some fun with the mirrors on the columns.  Rest assured, no one even noticed us goofing around! 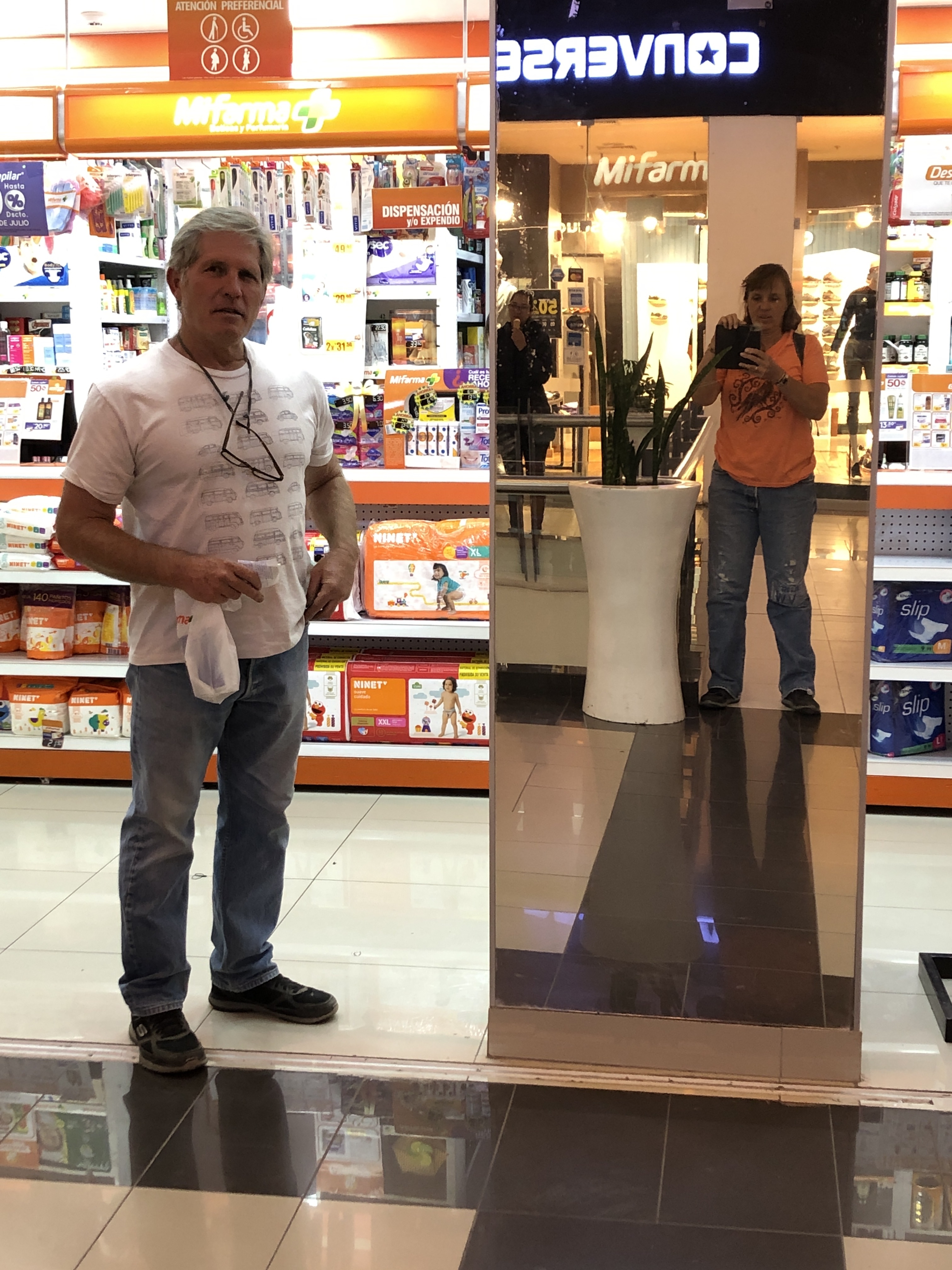 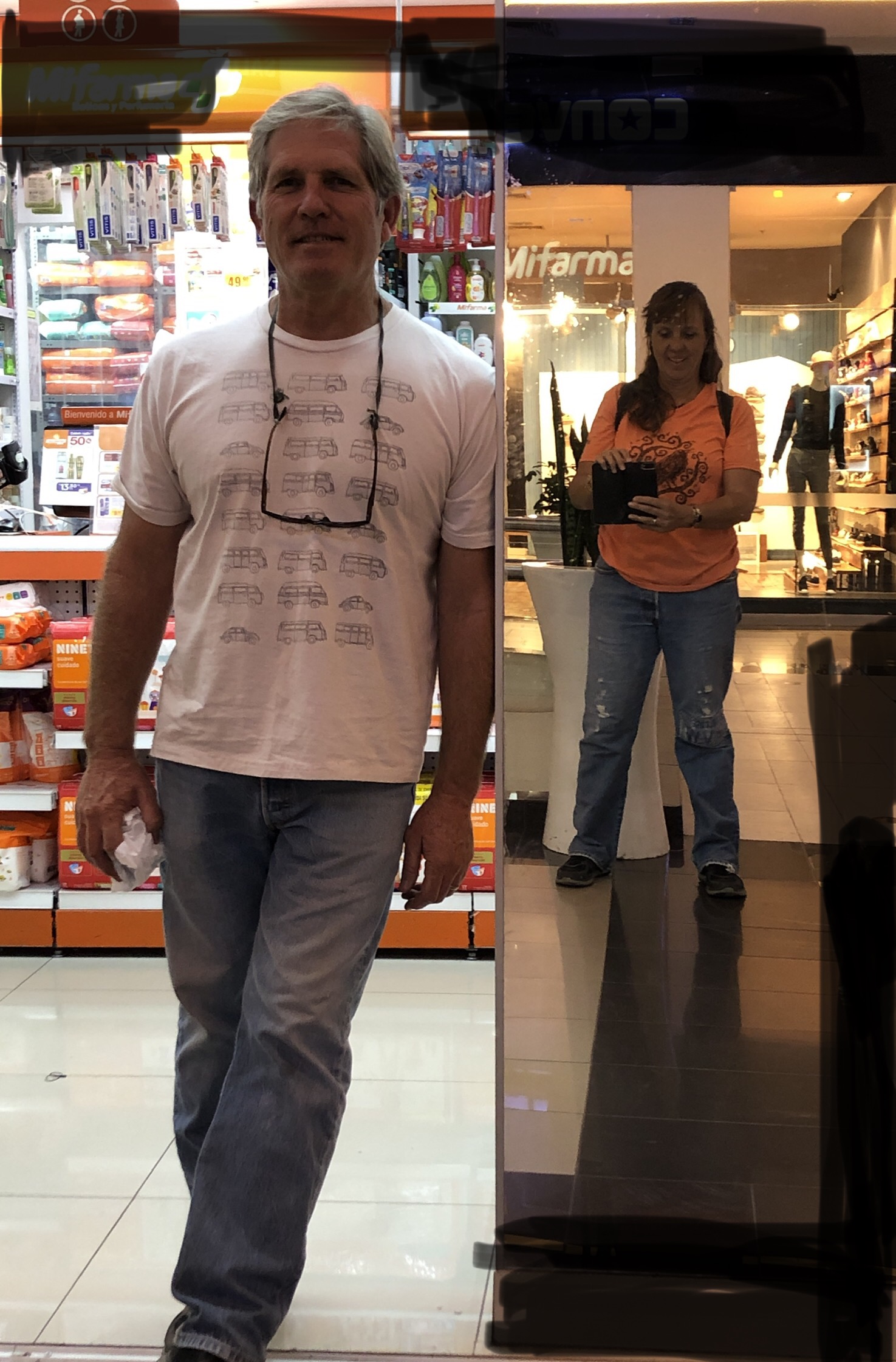 We also spent some time walking around the city of Lima and picking up a few things we needed for the truck and camper.  Mike looks pretty dapper in his new Peruvian poncho on this chilly day!

These first couple of days in the city we parked the truck camper at the edge of a small city park. This location is right along the sea cliffs and located in a nice neighborhood called Miraflores.  There are many good restaurants and even a few geocaches in this area.

Nica isn’t crazy about city parking because it means traffic, leash walks and limited free time outside.  Here she is staring at us from the center of the park.  She really wants to go off on her own, but we do not let her do that in the city.  This location also included some great entertainment from the guys offering parasailing off the sea cliff nearby.

Notice the cloudy, hazy background.  This is the typical year-round weather in Lima.  Many residents complain that it is a gray, dismal city.  When the sun breaks through the cloud cover, people pack the parks, the beaches and the recreation areas.

Our final fun in Lima during this visit was a yummy dinner with friends.  We had delicious hamburgers and enjoyed the good company as we secretly celebrated Geneva’s birthday.  Everyone in this photo is traveling through South America from another country.  It’s awesome to meet up with travel-friends on the road. 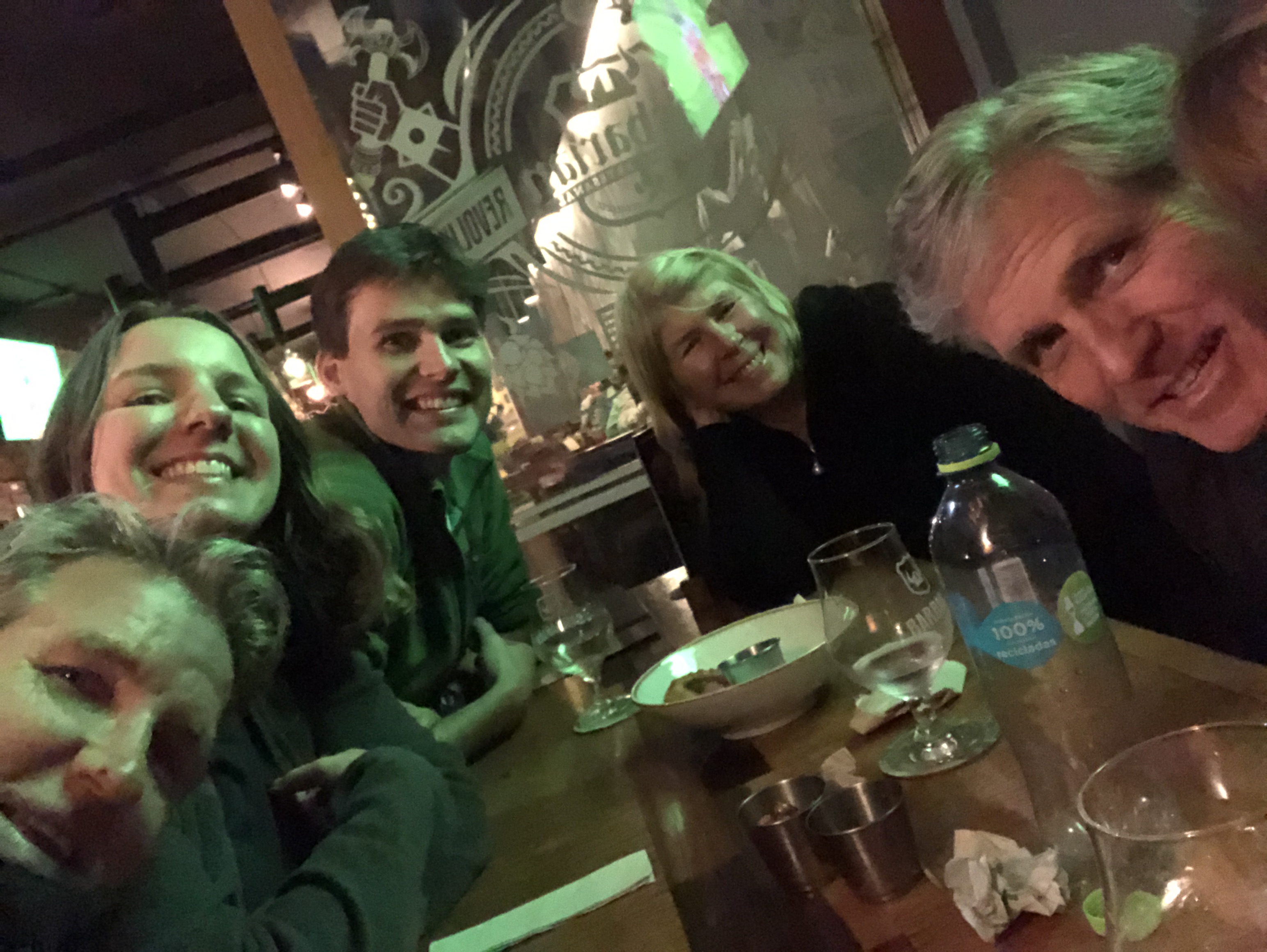 During our time in Lima we needed to have a little mechanical work done on the truck.  We drove through the crazy big-city traffic to reach the mechanics shop.  On the way we made an impulsive stop at a McDonalds for a grease-fix!!

Notice that there is a security guy assigned to watch our truck, while we enjoyed our McDonalds stop.  After he guided us out on to the road again, we caught up with this little car hauling a big load.  As we got closer we realized what was in each of the paper-wrapped parcels.  If you peer under the rear hatch of the car you can see one of the products wrapped just in clear plastic.  Can you tell what it is?  Yup…… a casket!  This little station wagon is hauling ten caskets! 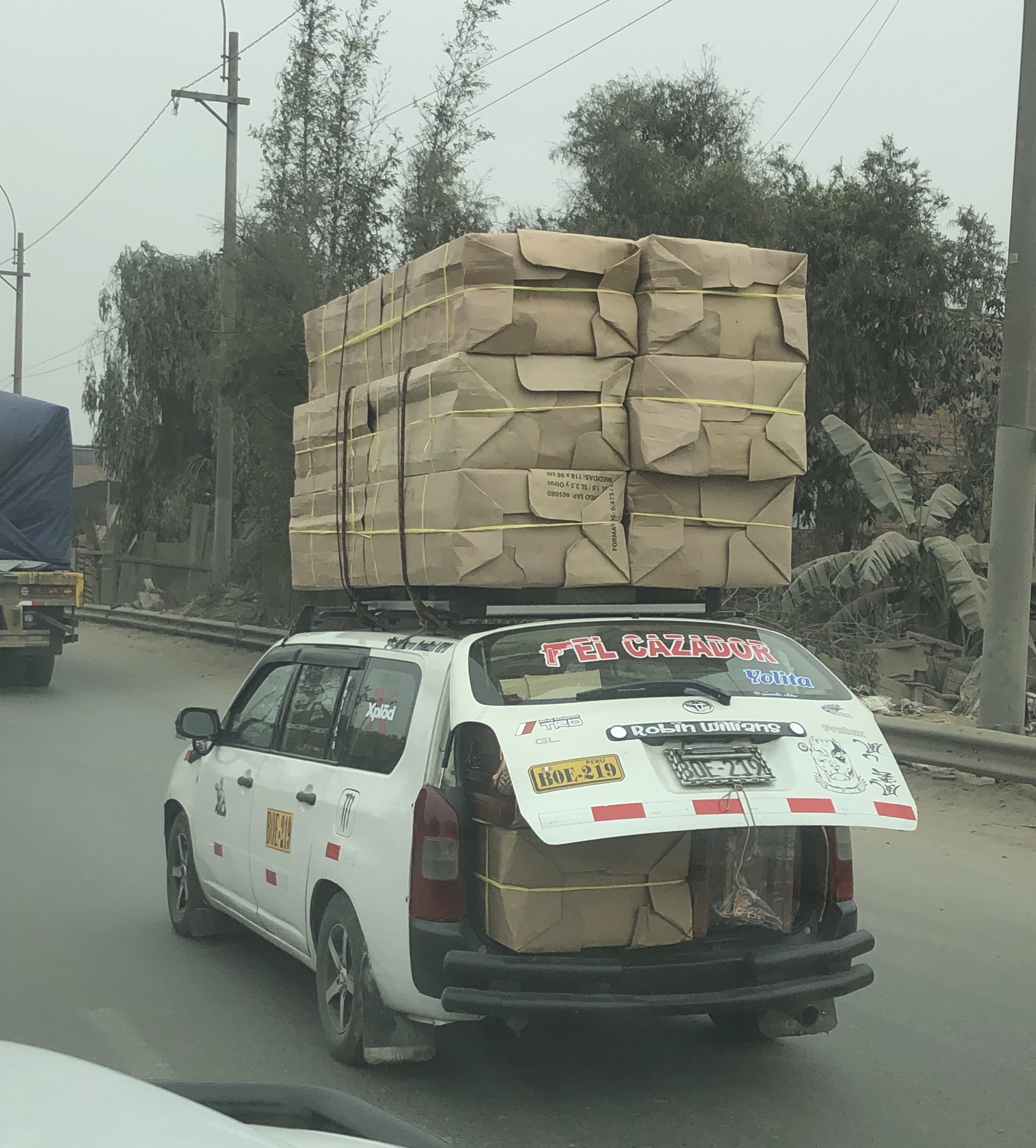 Driving across the sprawling city of Lima led us to a well-known mechanics shop.  This location is famous among the overlanders as a good mechanic, a safe storage location and a good place to stop near Lima. 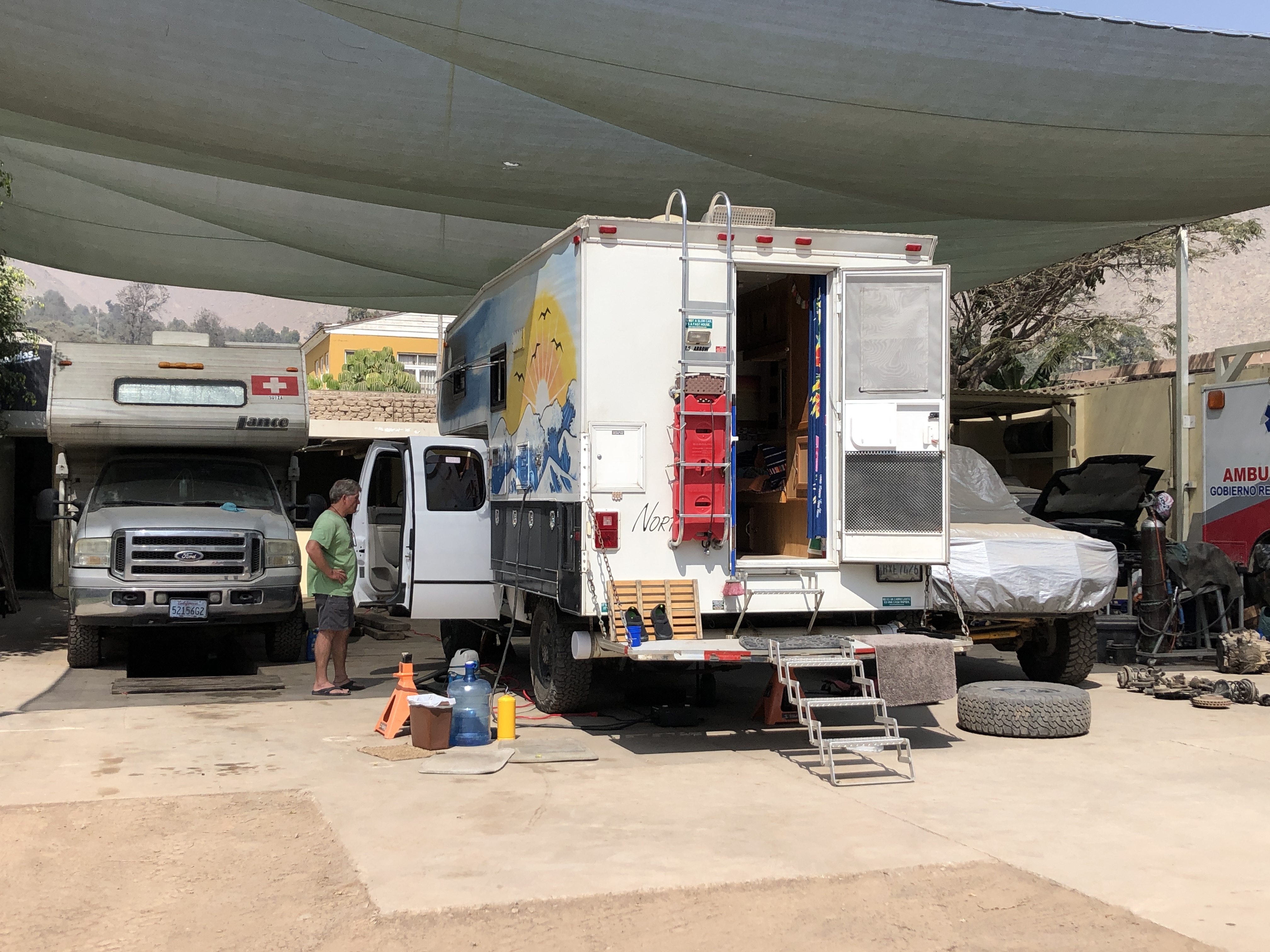 We nestled in among the other travel rigs. Mike and Carlos took care of many projects on the truck and camper.  Geneva took time to wash many items in the truck and camper at the slop sink.   It was a great chance to feel like we had a handle on several things that get overlooked when we are moving steadily. 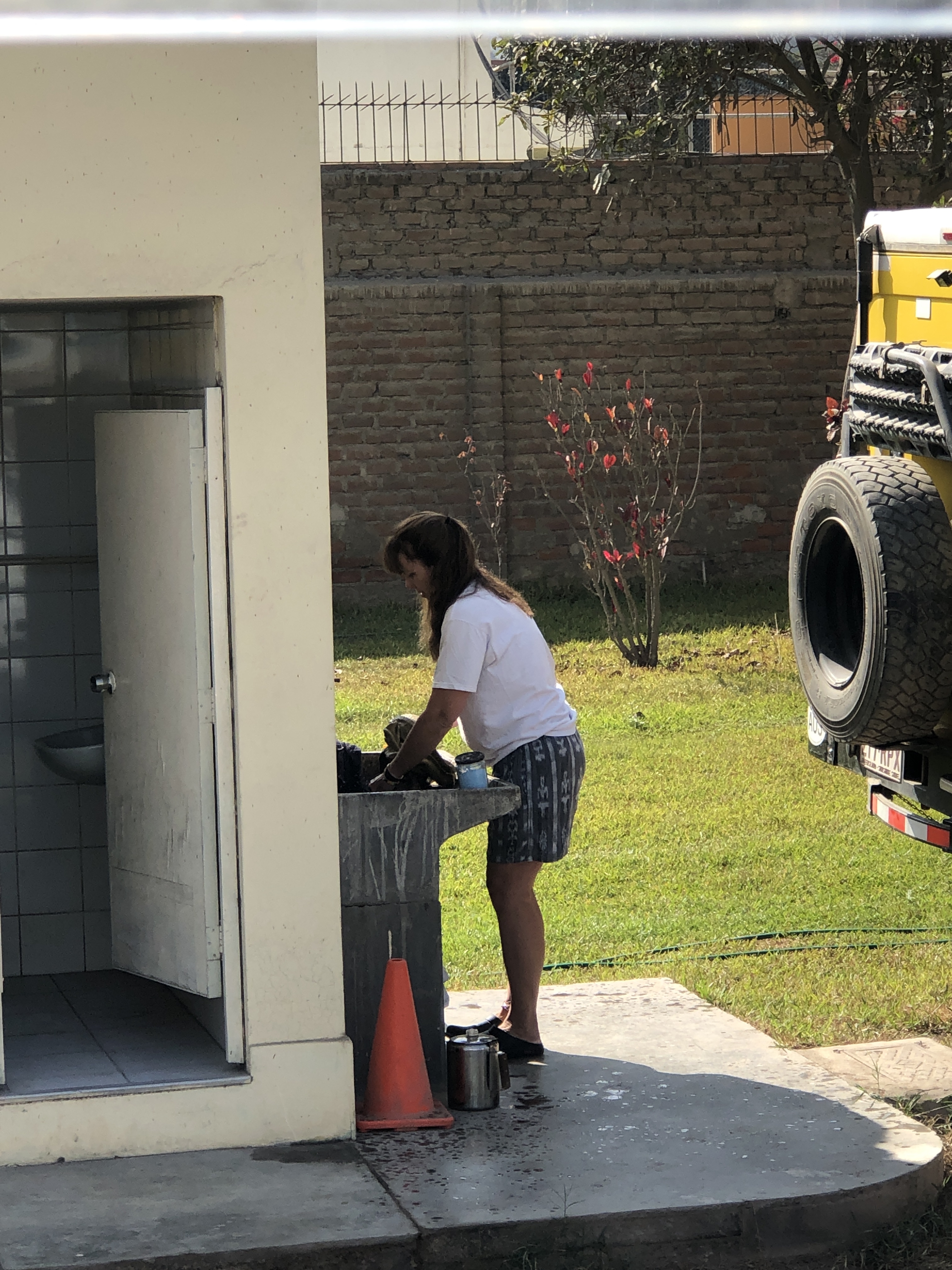 And while Mike and Geneva were busy with their chores and tasks, Nica was also keeping herself busy.  She moved from the shade to the sun in the garden next to the mechanics shop.  With a large grassy lawn and a fully fenced property, she enjoyed the freedoms of this non-city camping spot for a few days. 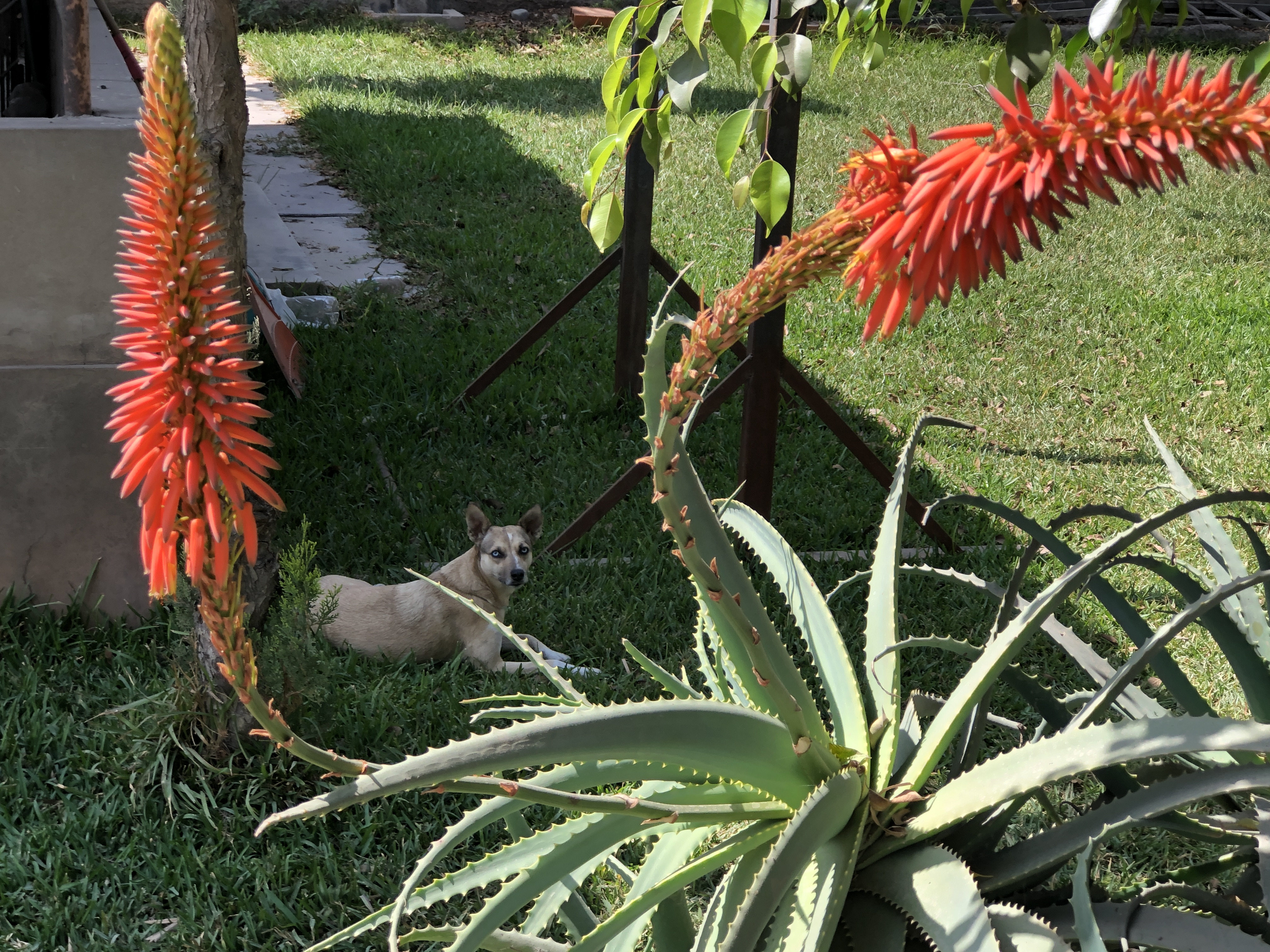 Things are about to change drastically for Nica.  This time in Lima we were also going to adopt a second dog.  In the next post I will share the story of how Pacha picked us!

Thanks for hanging out in Lima with us through these last three posts.  Next we head South and visit Hogar de Tiwi to meet some dogs that are up for adoption.