The capital city of Ecuador is Quito. It is set in a valley, surrounded by mountains. Most of the mountains are dormant volcanos with towering peaks and beautiful green foothills. To walk the streets of the city is to experience a wild contrast of poverty and wealth, safety and danger and modern with antiquated. 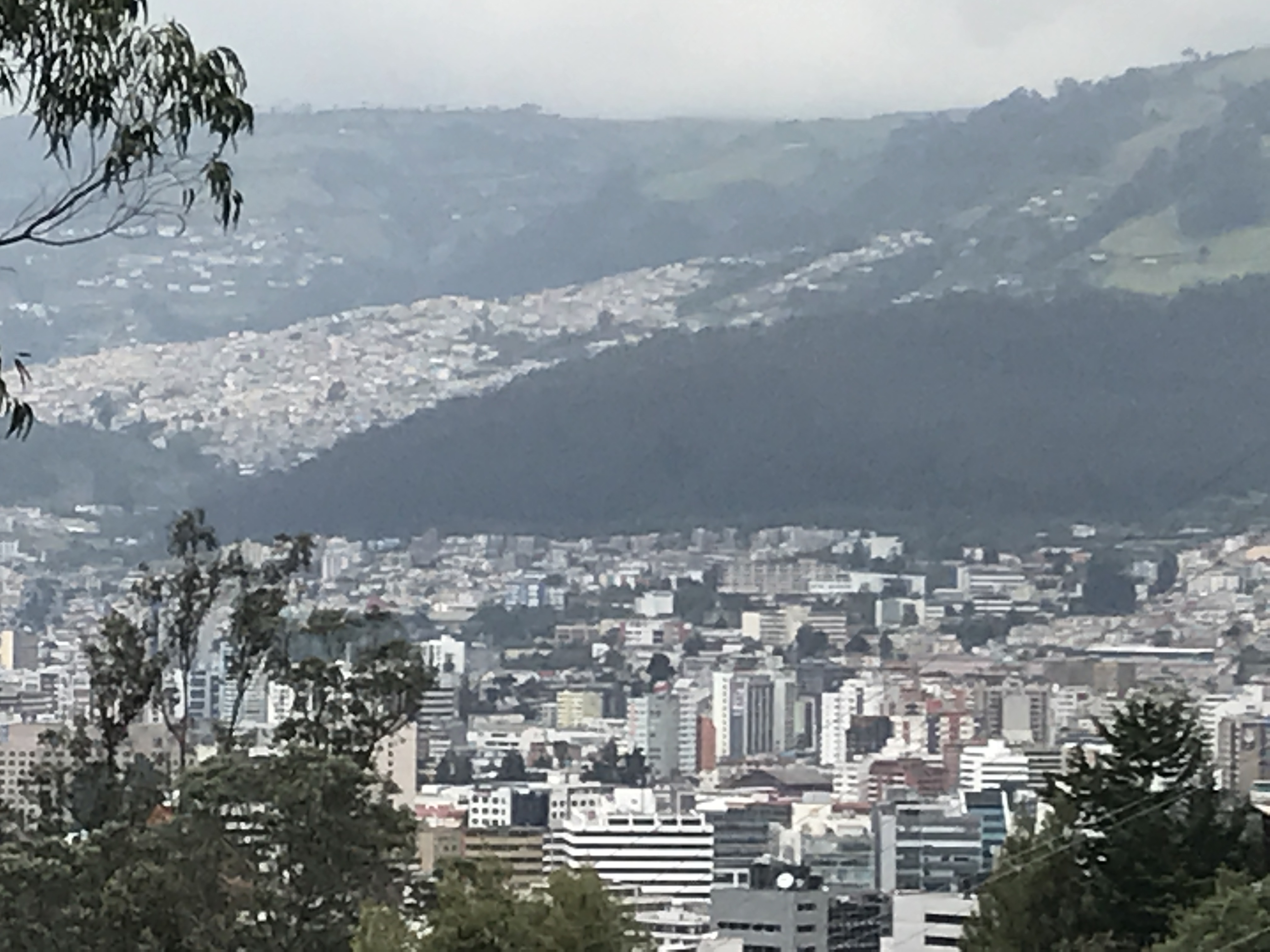 Camping in a capital city can be tricky. Quito has a very special spot that other travelers have located and marked using the app iOverlander.  This parking spot is on the edge of Parque La Carolina, a huge public park (think Central Park in New York City). It offers a running track with lights, numerous tennis courts, soccer fields, football fields, a BMX track, a dog park, a botanical garden, many playgrounds, art sculptures, a pond for paddleboats, a skate park, two museums and thousands upon thousands of old trees and benches for enjoying all of it. Each day at the park begins the day with joggers, dog walkers and a loud Zumba class. Then school groups arrive for picnics or sports training.   Throughout the evening there are clubs, groups and friends meeting for workout fun.   Check out this website to be inspired by a large city doing a great job with open space in Parque La Carolina!

In our time at this campsite we met several other groups of travelers who passed by. 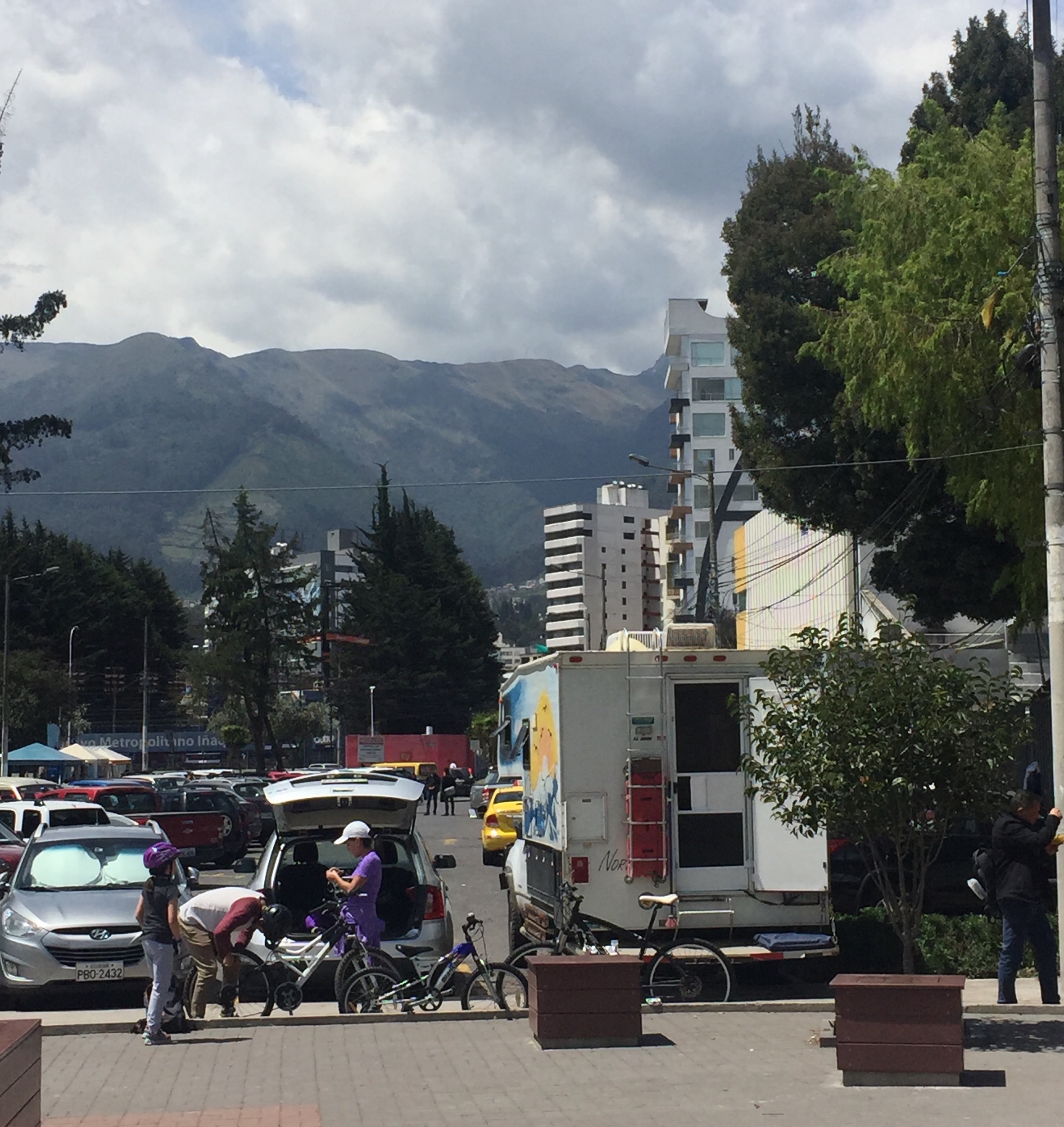 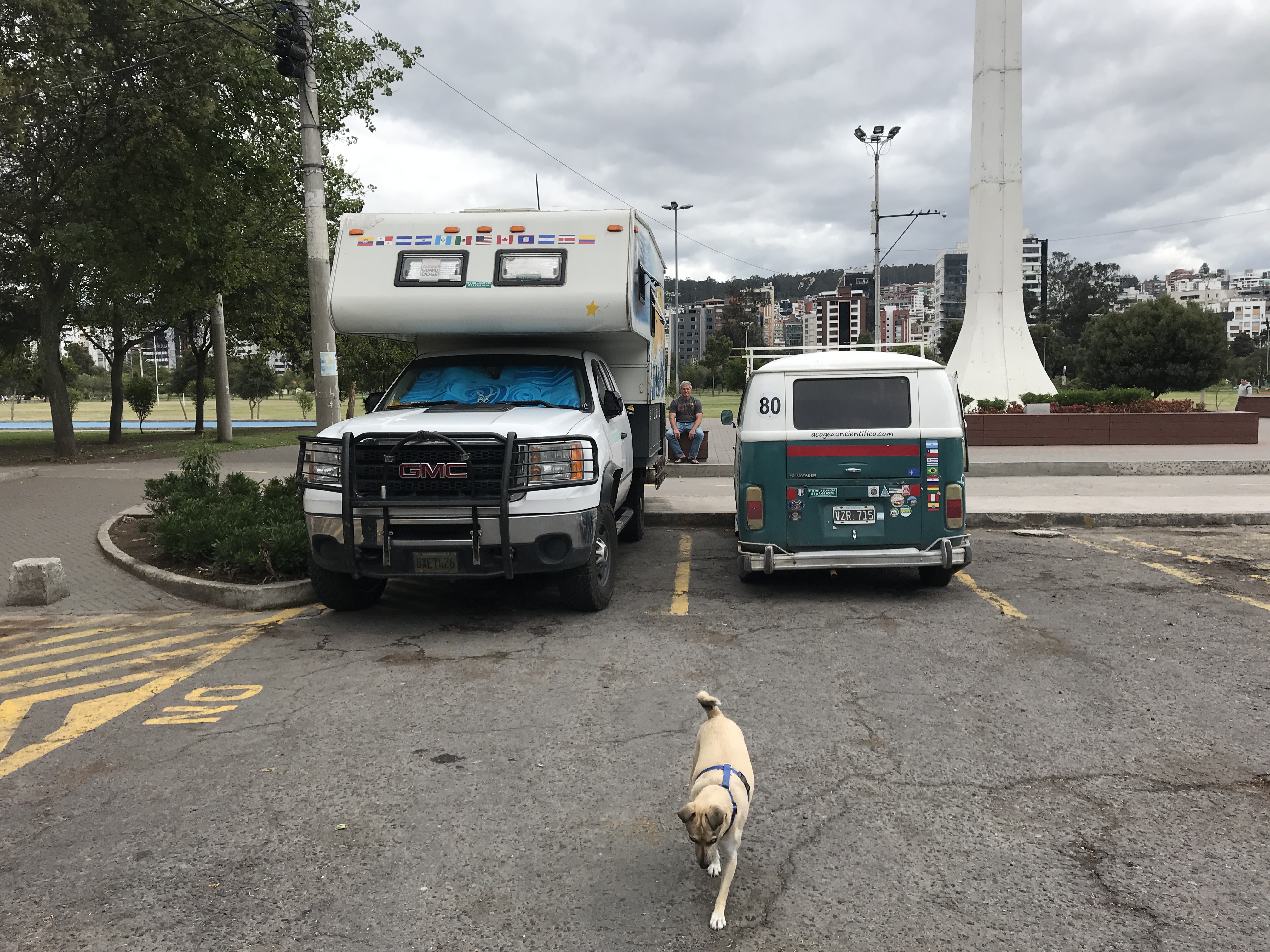 One Saturday morning we awoke to the sights and sounds of a farmers market outside our windows. We wandered through the white tents and enjoyed shopping from a farmers cooperative that brings their products down from the nearby mountains. 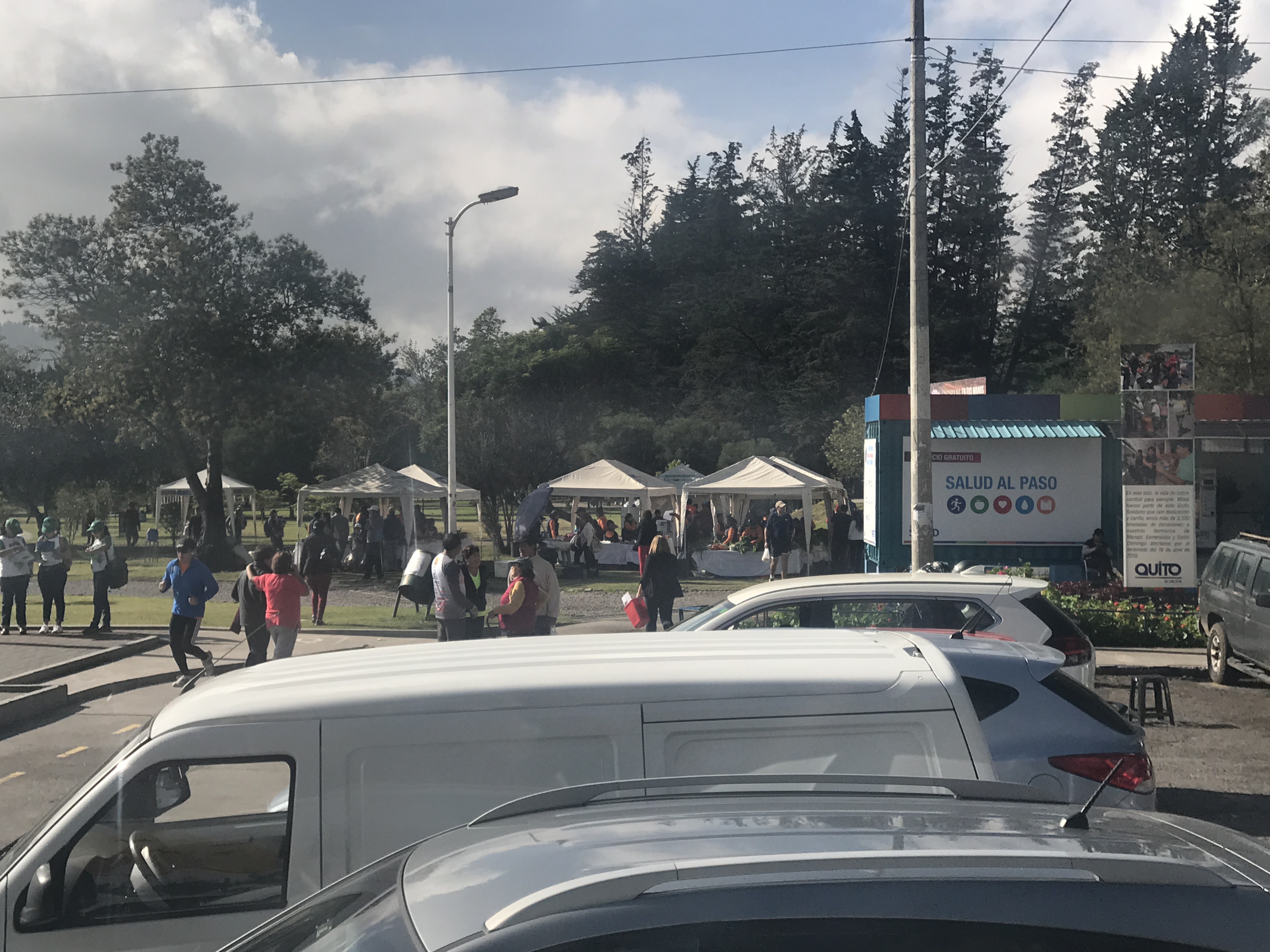 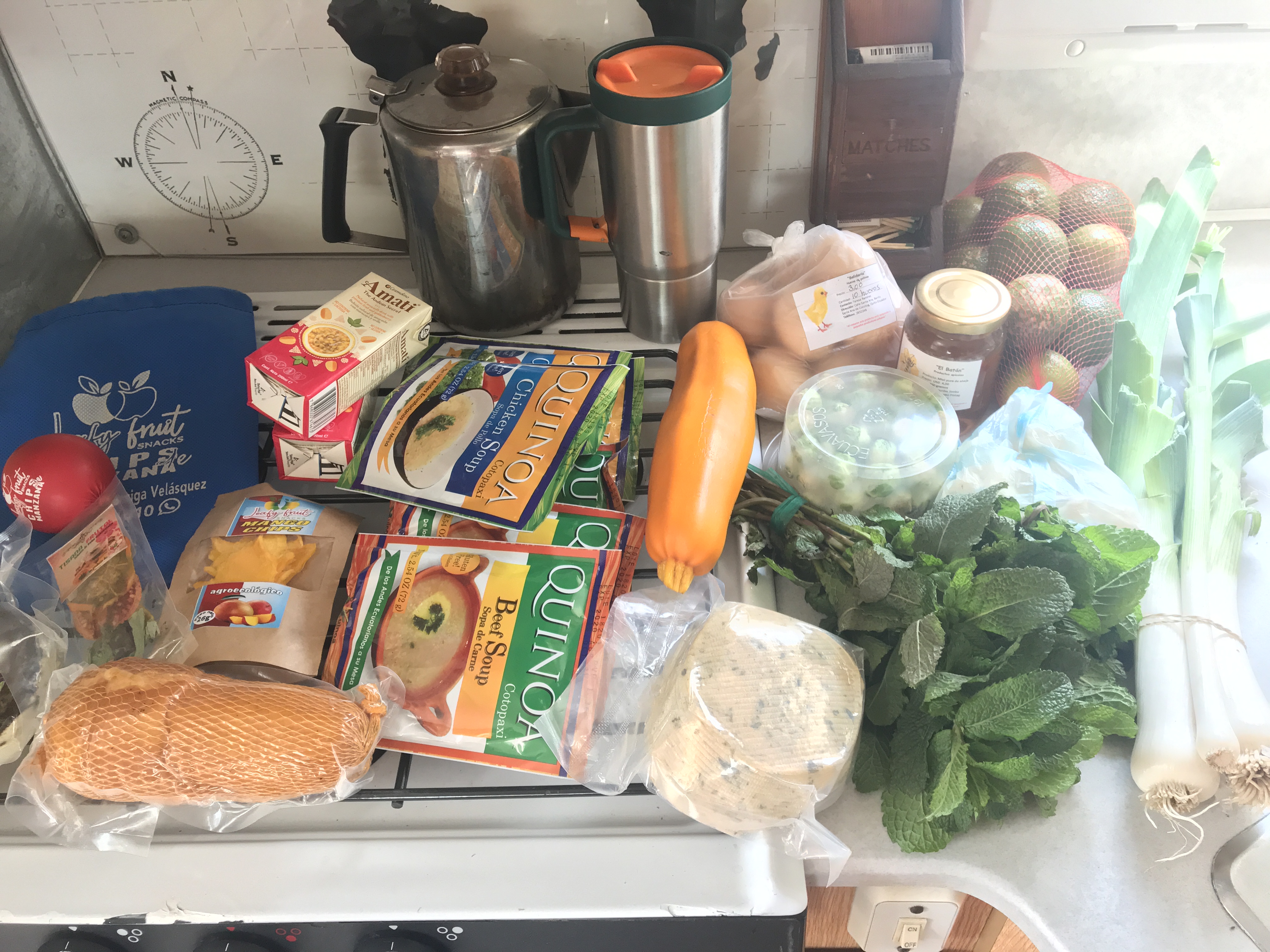 We took Nica geocaching throughout the nearby neighborhoods. One of the caches is located in a park with several water fountains. Nica was very busy with the water and spent a lot of time trying to manage it.  At one point she made such a scene that a crowd gathered to take photos and videos.  Here are a couple of clips we took. 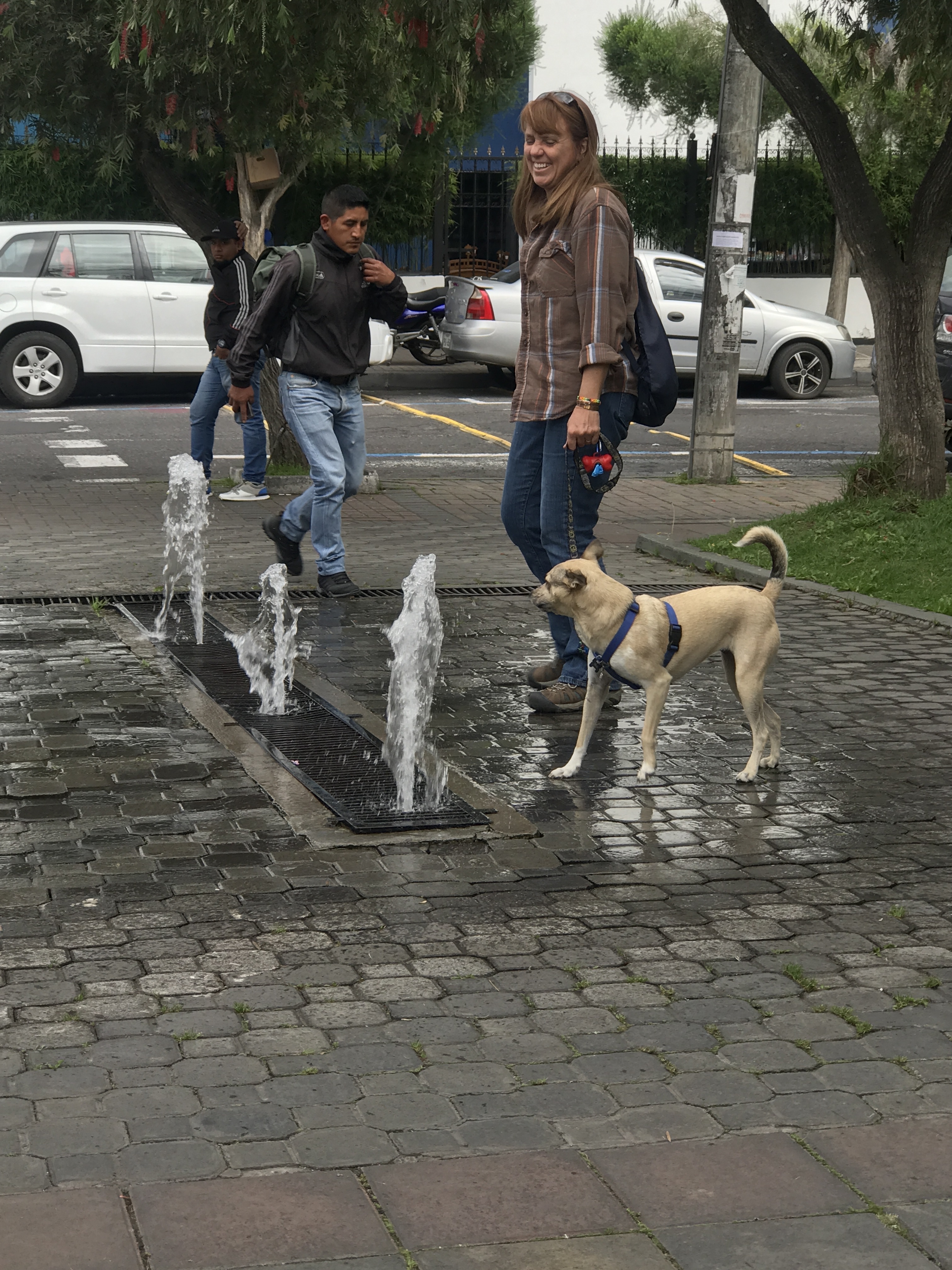 Later that night, she spent hours and  hours curled up and completely exhausted.  And surprisingly clean from her bathing in the fountains! 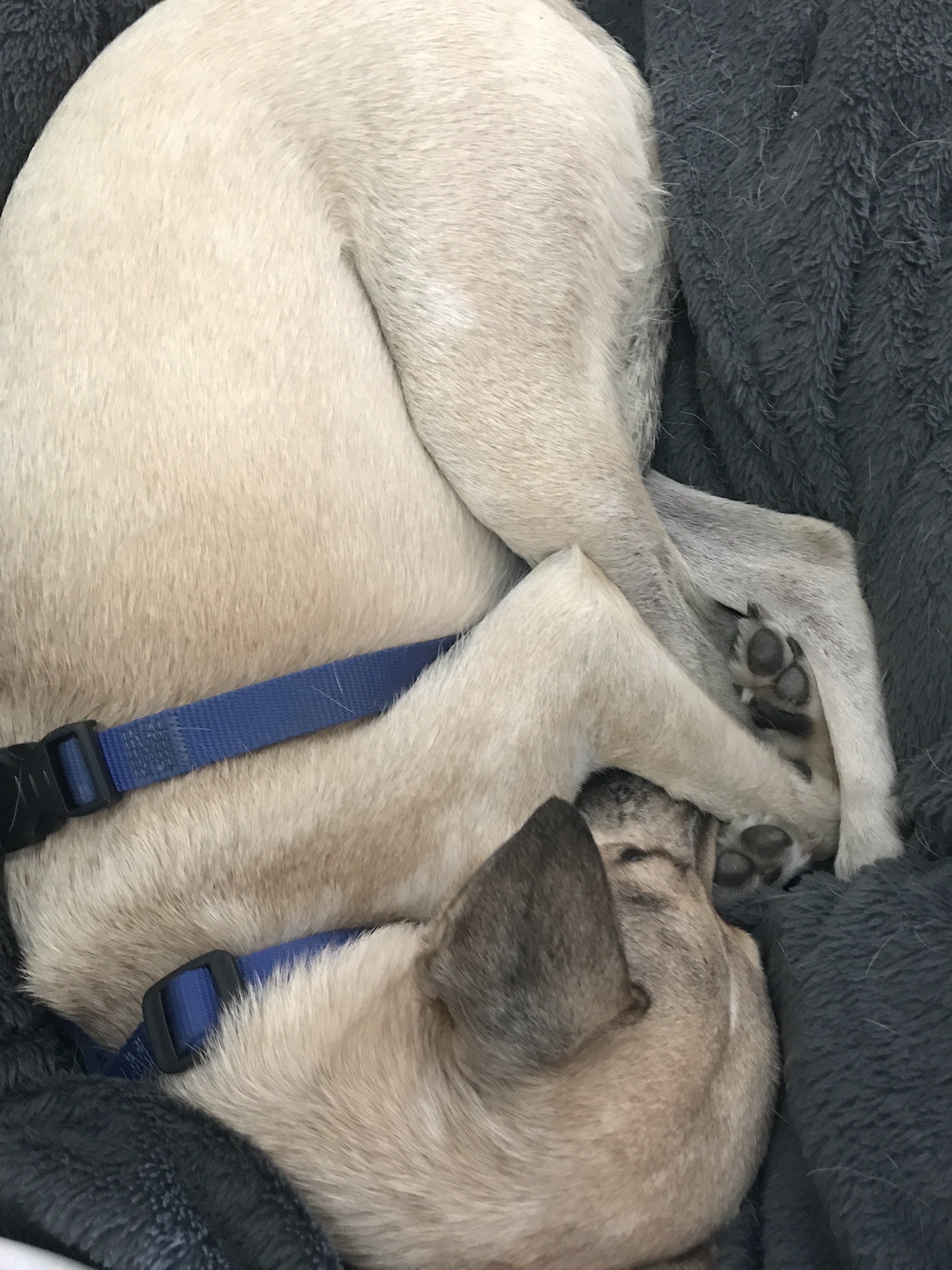 The fancy part of town is near the park. We walked all around and explored the area.  We found this interesting zen sculpture there. We also found a yummy burger restaurant that allowed dogs inside and served special dog treats along with the burgers and fries. And of course, being a fancy part of town, we later paid $8.50 for a margarita that would have been about $2.50 elsewhere.   But it was fun to explore this part of Quito. 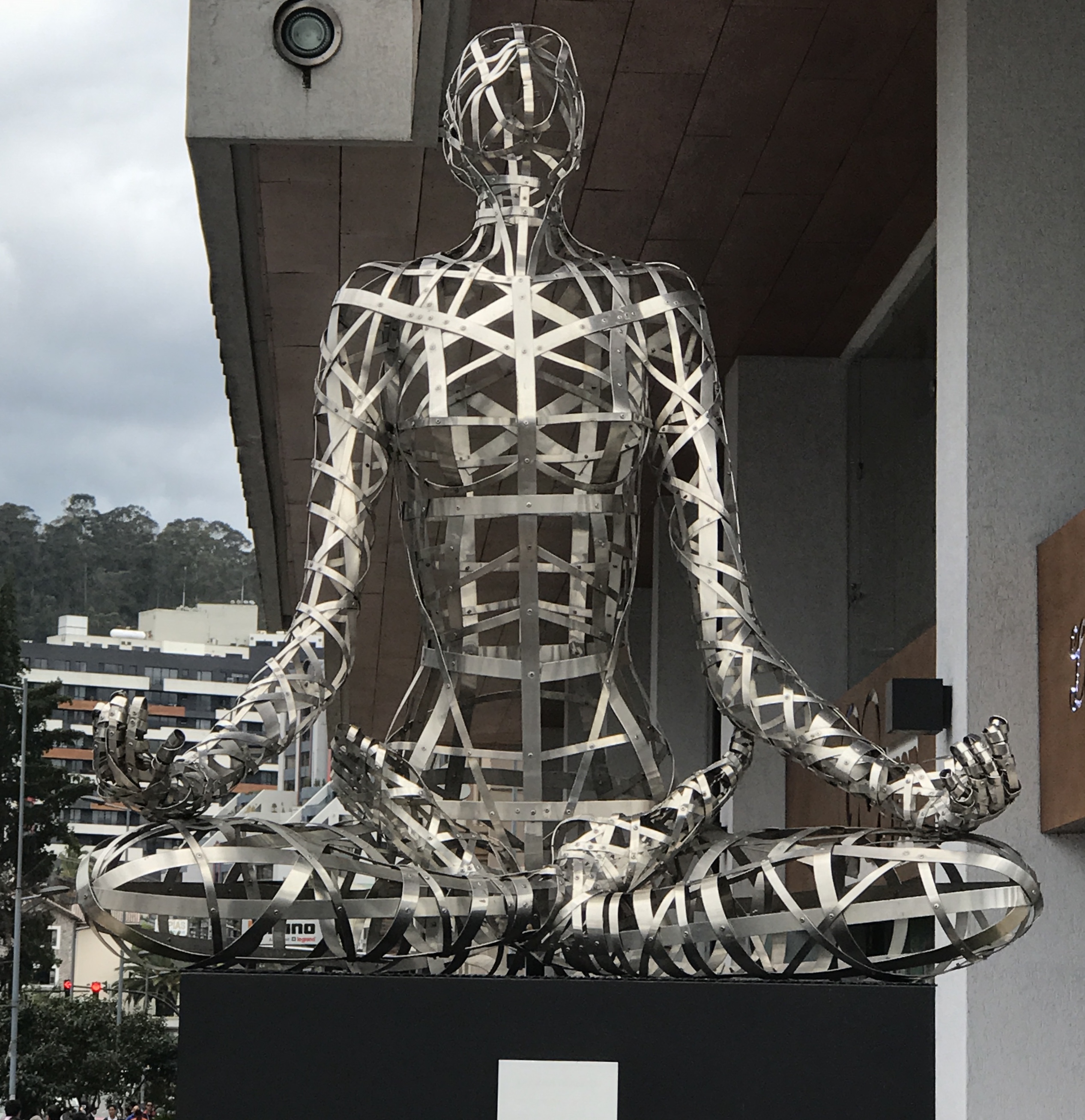 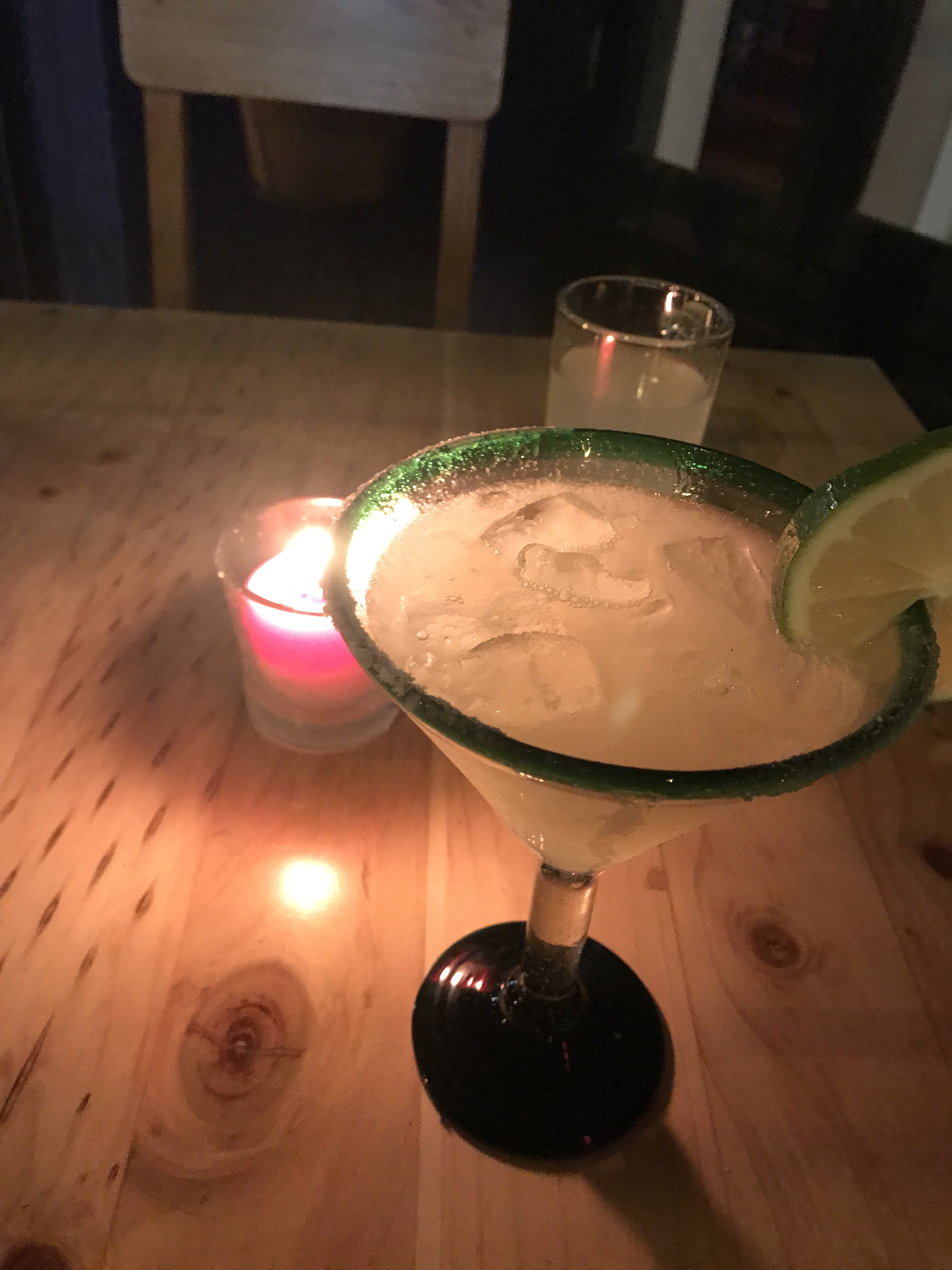 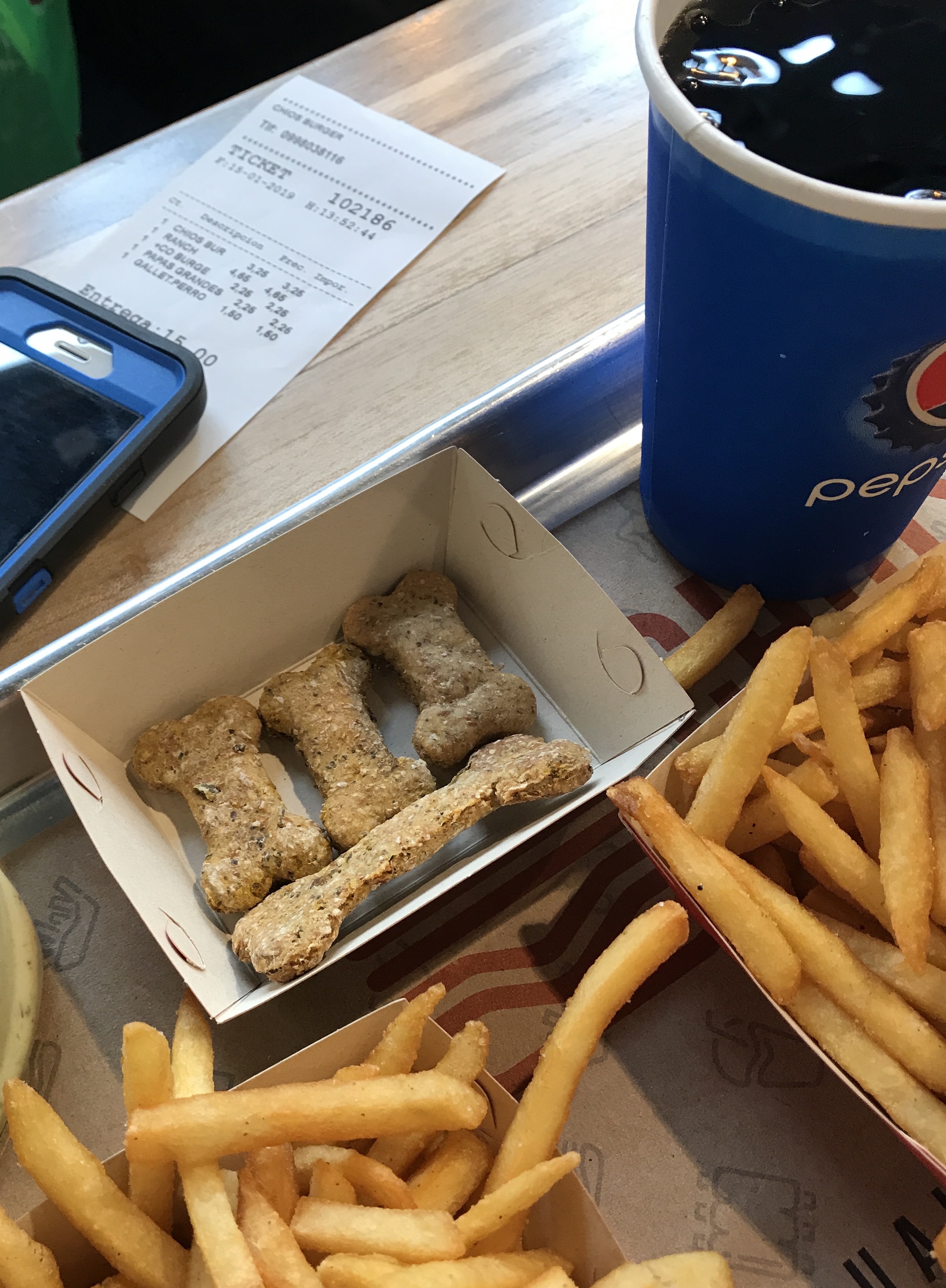 While we were in Quito, our friend Julian from Colombia flew in to travel with us for a while. Nica was very excited to see him, as were we.  Here is a little video clip of them being reunited.

We were happy to have Julian with us as we  explored more of Ecuador. And of course, Nica is happy to have her friend sharing the back seat with her. 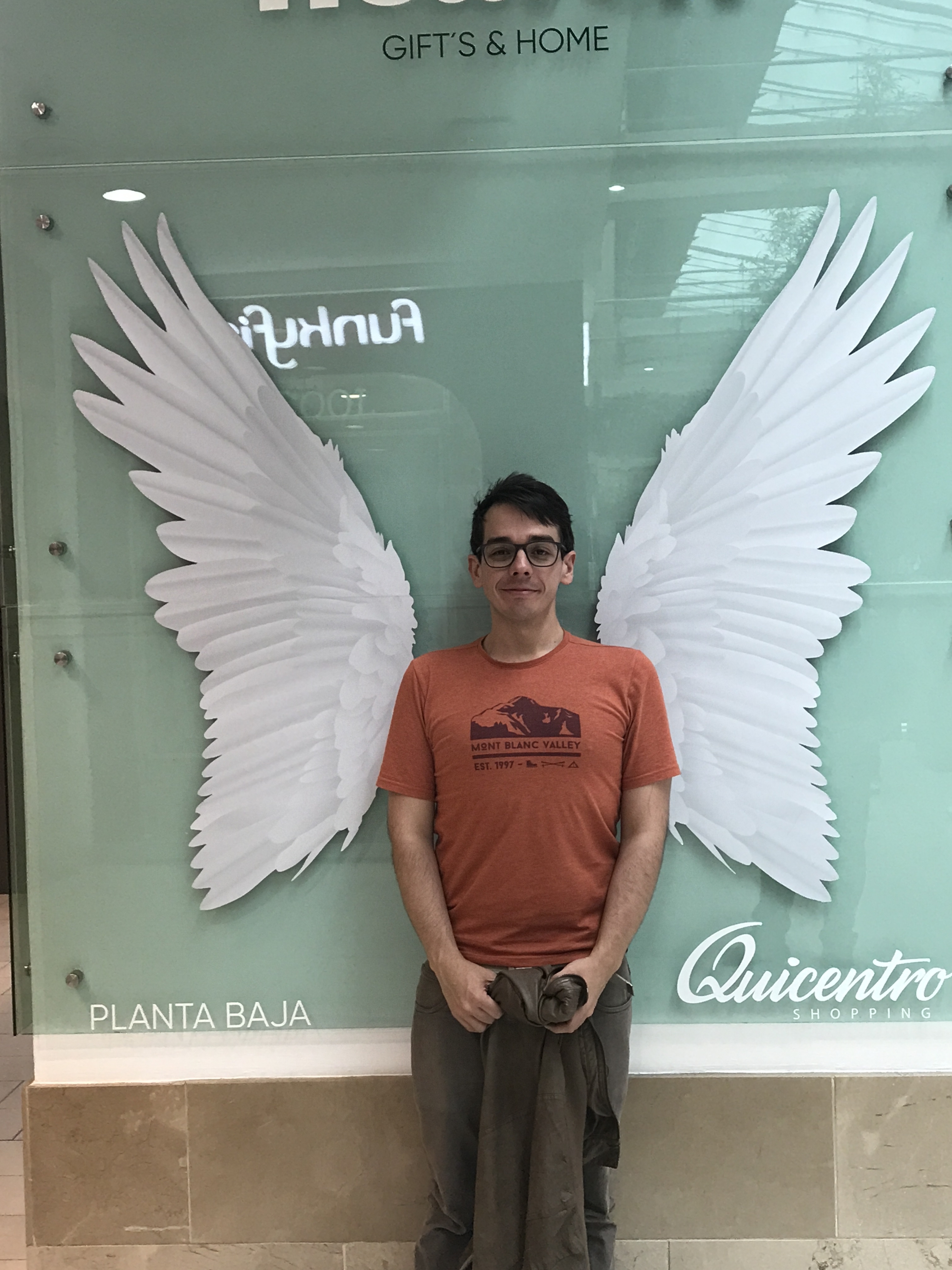 With Julian we experienced our first “escape room” game. If you have never tried one, I would urge you to do it.  It was very challenging and fun. And really, you need to do a couple to get the hang of it. 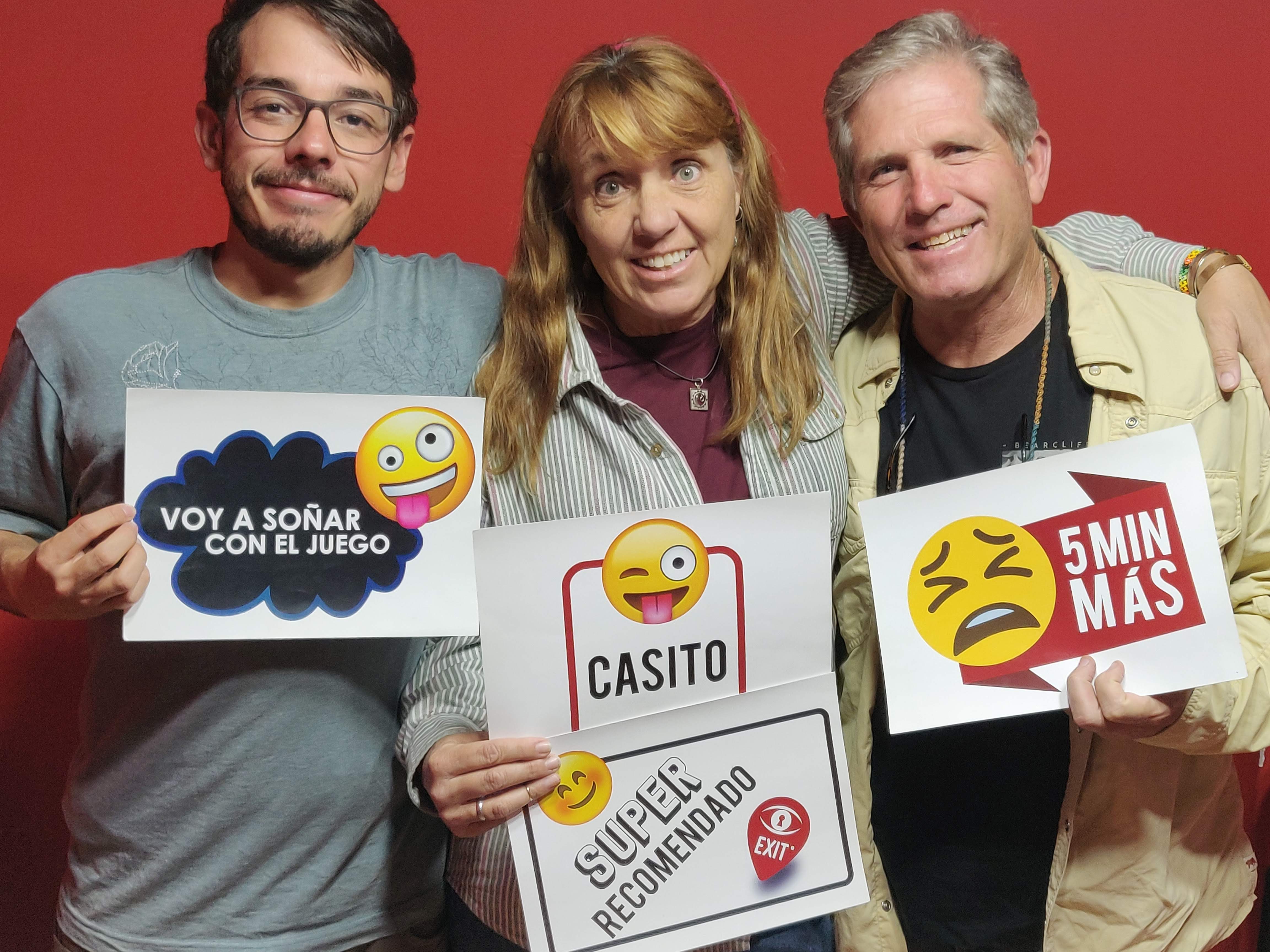 We also took the double-decker tour bus to explore the city. We have always found these to be an excellent value in a large city.  Seeing the highlights, hearing the location stories and avoiding the hassle of driving is a benefit.  And if we loved something, we can always go back.  The weather was perfect for us.  (thanks for the tip, Sheryl) 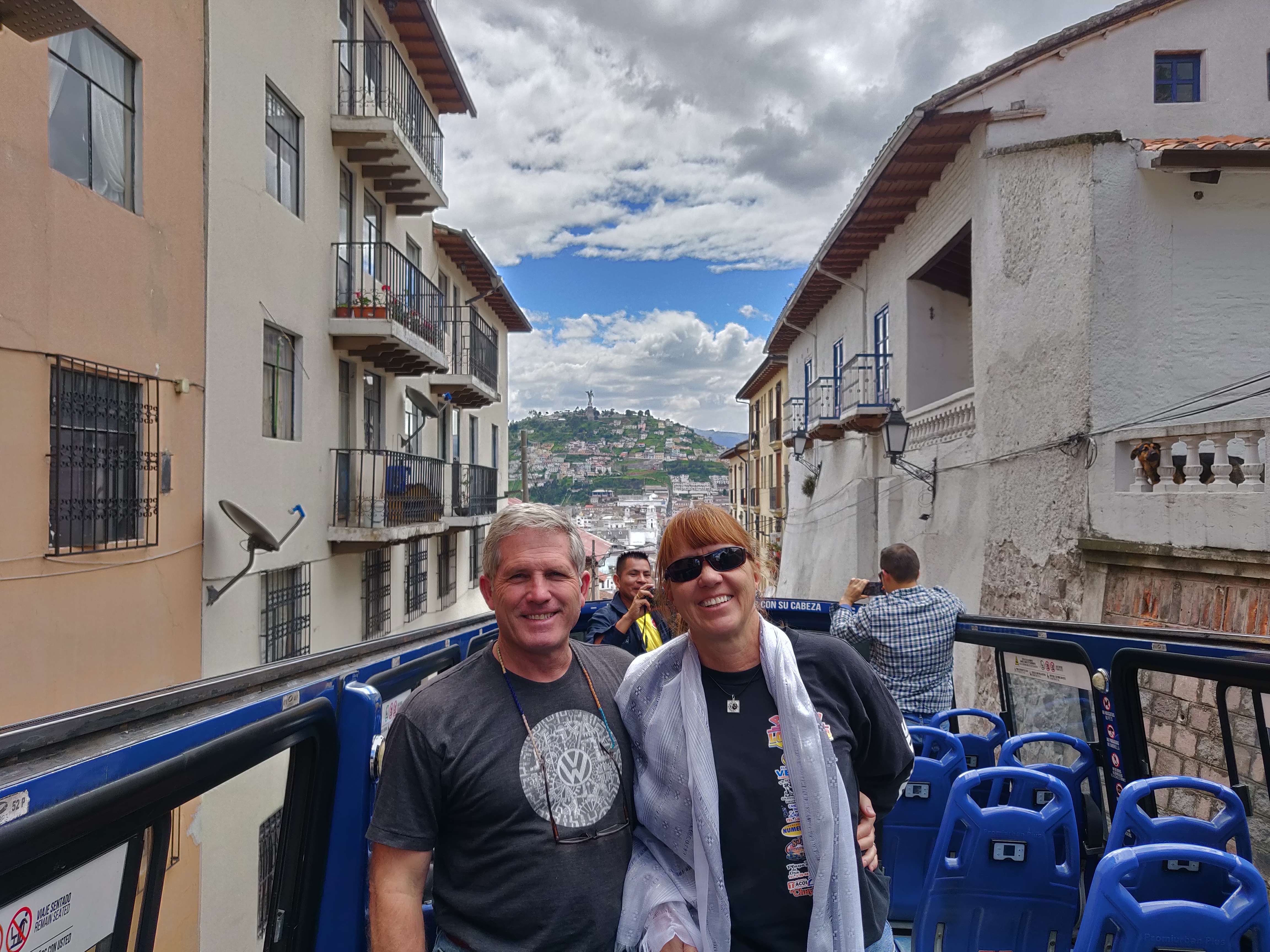 We jumped off and on the tour bus at several locations for a closer look at things.  We peeked in several elaborate churches and even found the special Ecuadorian impression of “The Last Supper” . If you look closely you will see that the main dish is an Ecuadorian delicacy, roasted cuy. 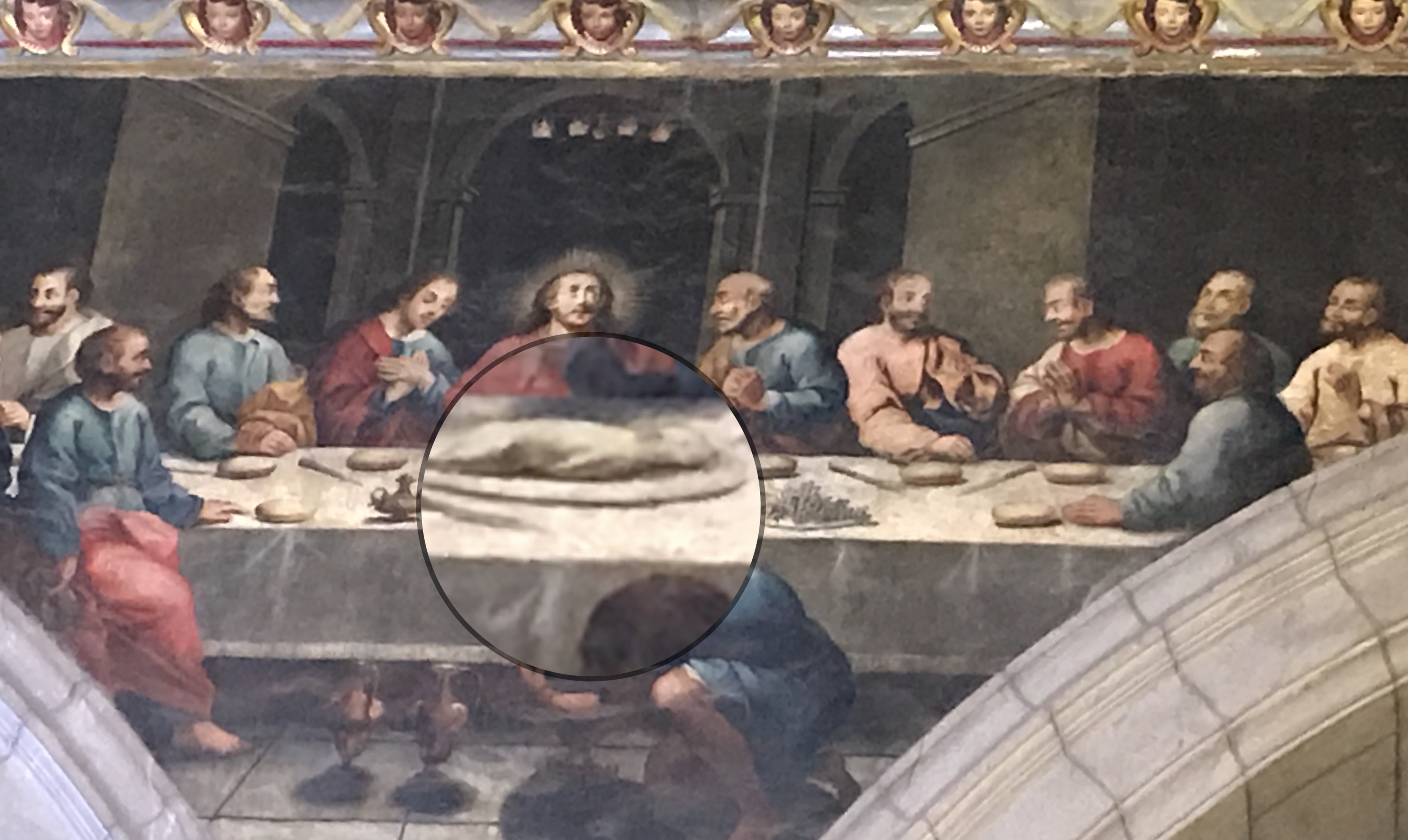 Although I am not sure that they ate guinea pigs in Israel, they do eat a lot of them in Ecuador. Even this hand beaded, holy robe garment features a cuy (guinea pig) as the central figure! 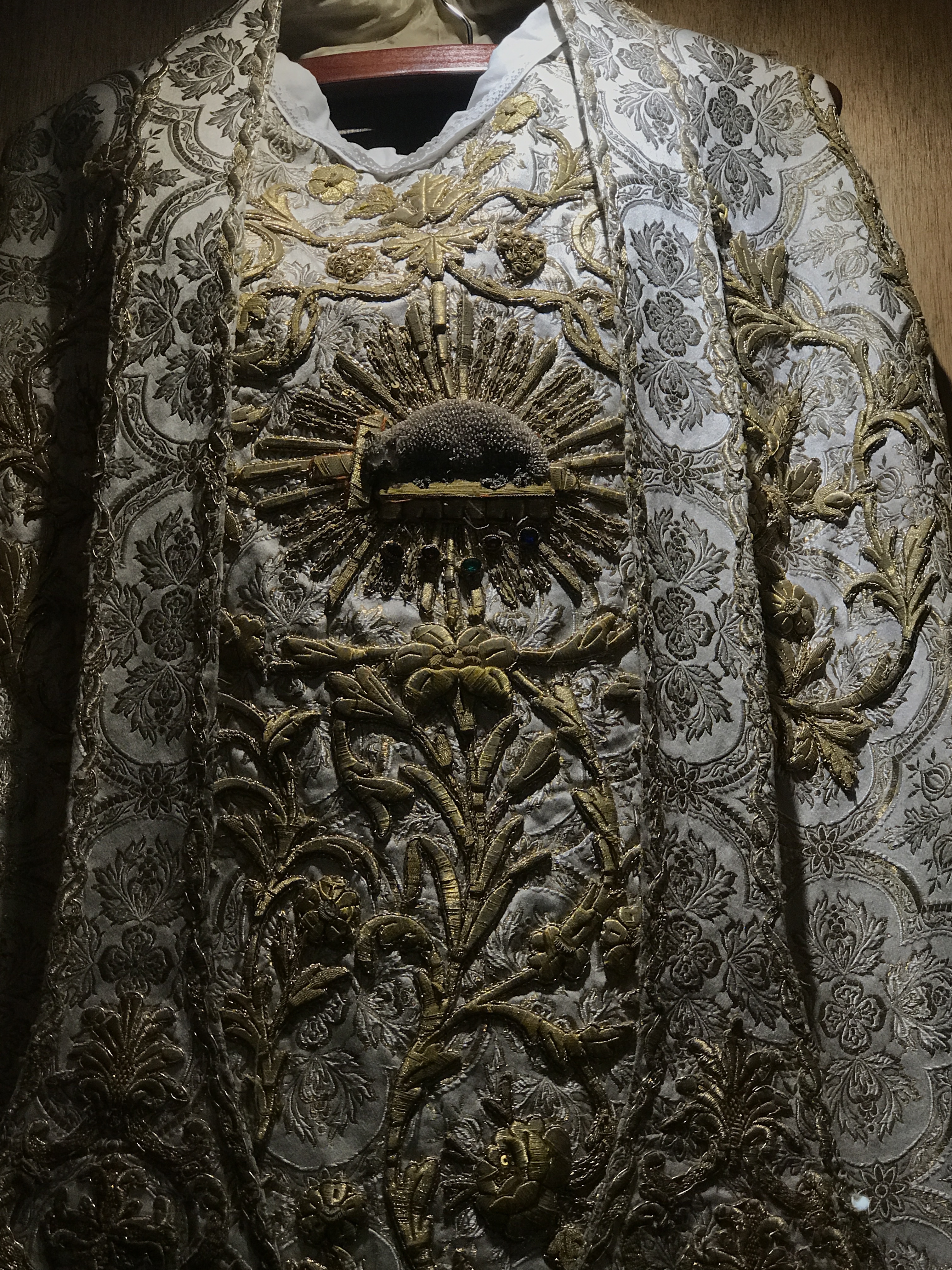 The church altars were elaborate and covered with miles and miles gold leaf. Each one featured idols, images, icons and religious elements that have been preserved since Spanish conquest dates.  The lavish interior displays were in stark contrast to the inner city surroundings. 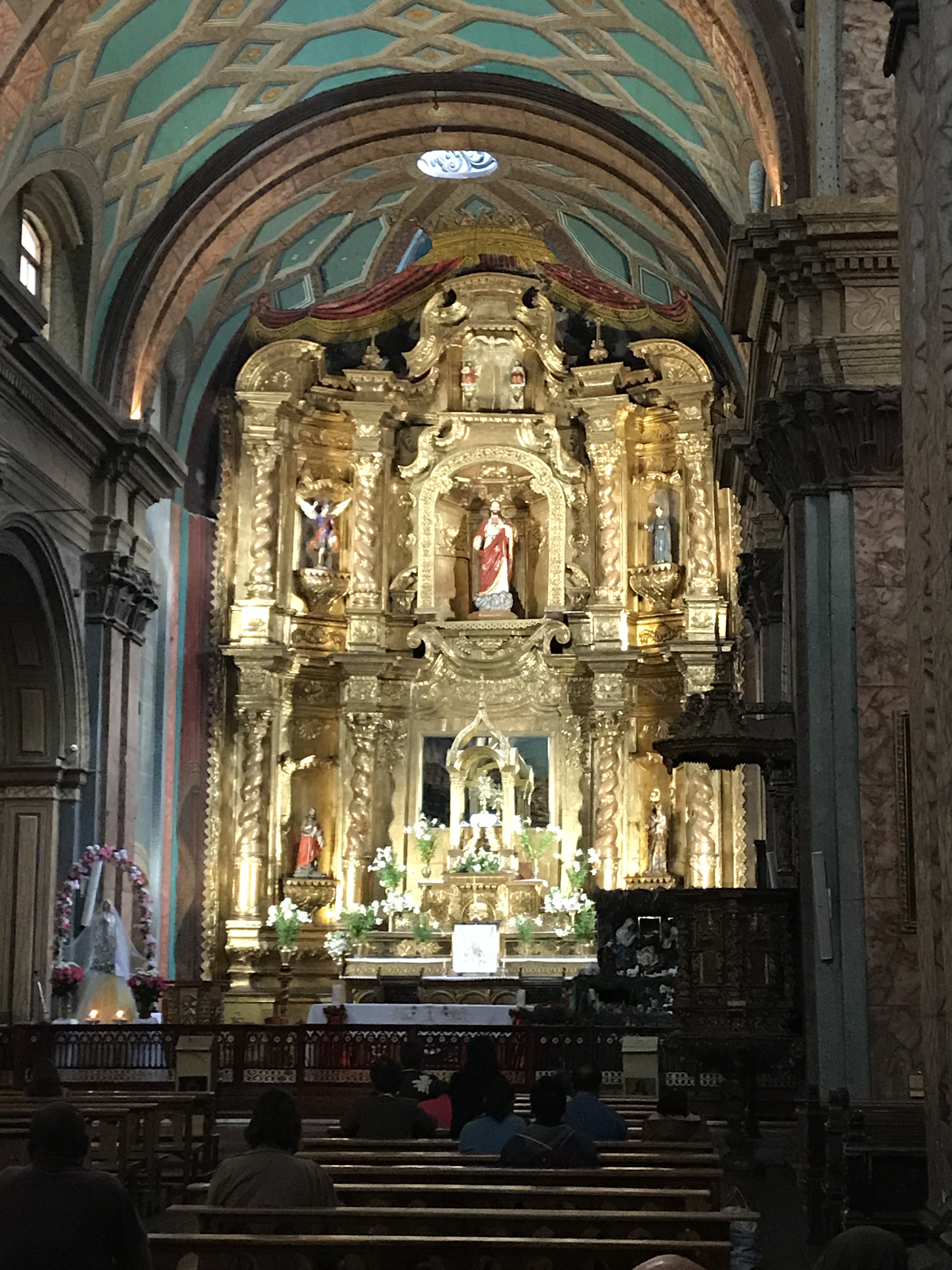 The biggest church in Ecuador is the Basilica. This gorgeous facility is constantly under construction and repair due to earth tremors and settling. But the details and craftsmanship are incredible. The huge wooden doors are carved with Biblical scenes.

The stained glass windows are hundreds of feet in the air and yet still show exquisite details and vibrant colors.

And unlike many traditional gothic style buildings, this one does not have the standard gargoyles around the perimeter as drain spouts. Instead at each downspout is an artistic representation of an Ecuadorian animal. Here are a few different animals that I was able to get photos of. Every column features a different animal. 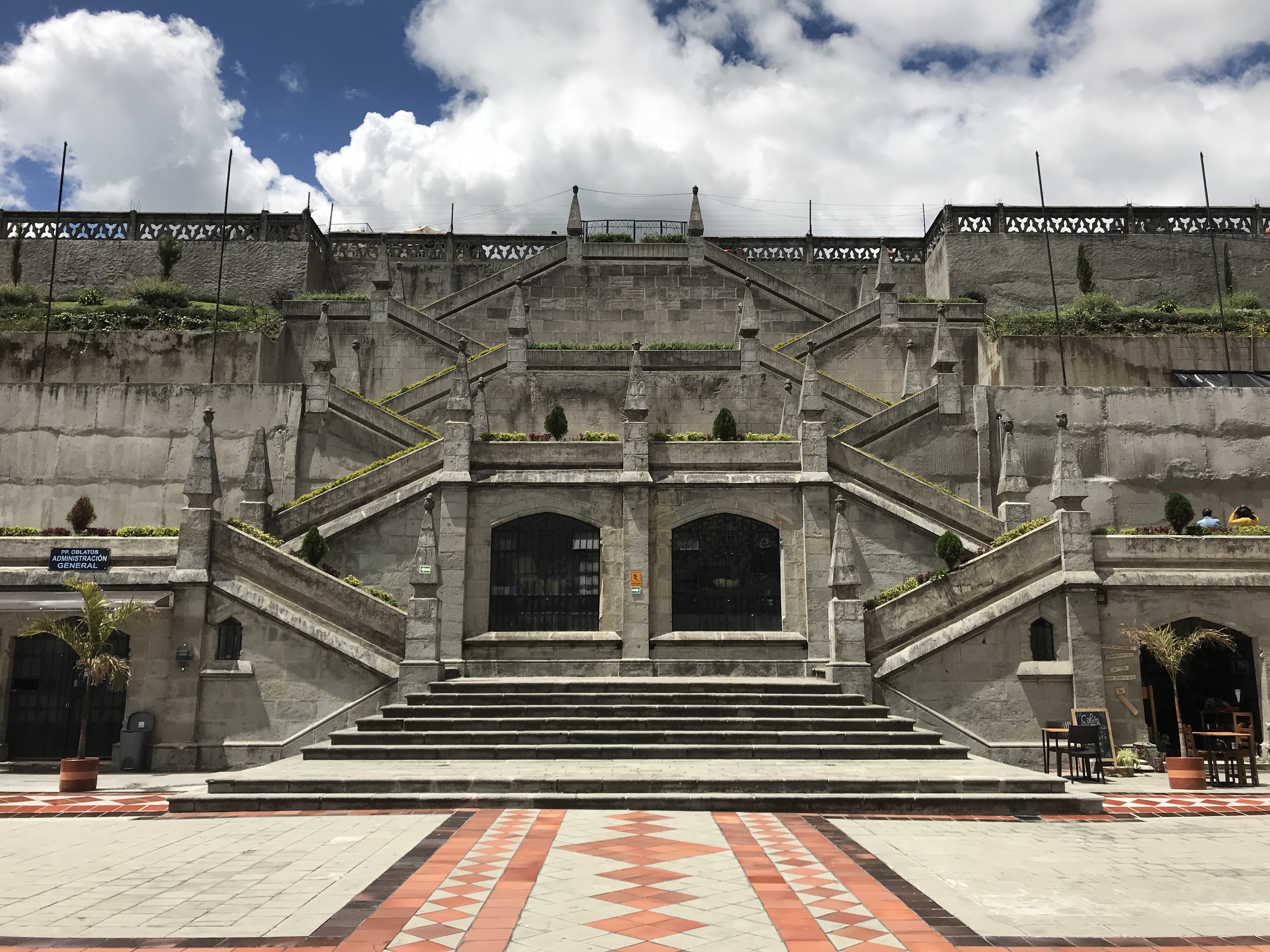 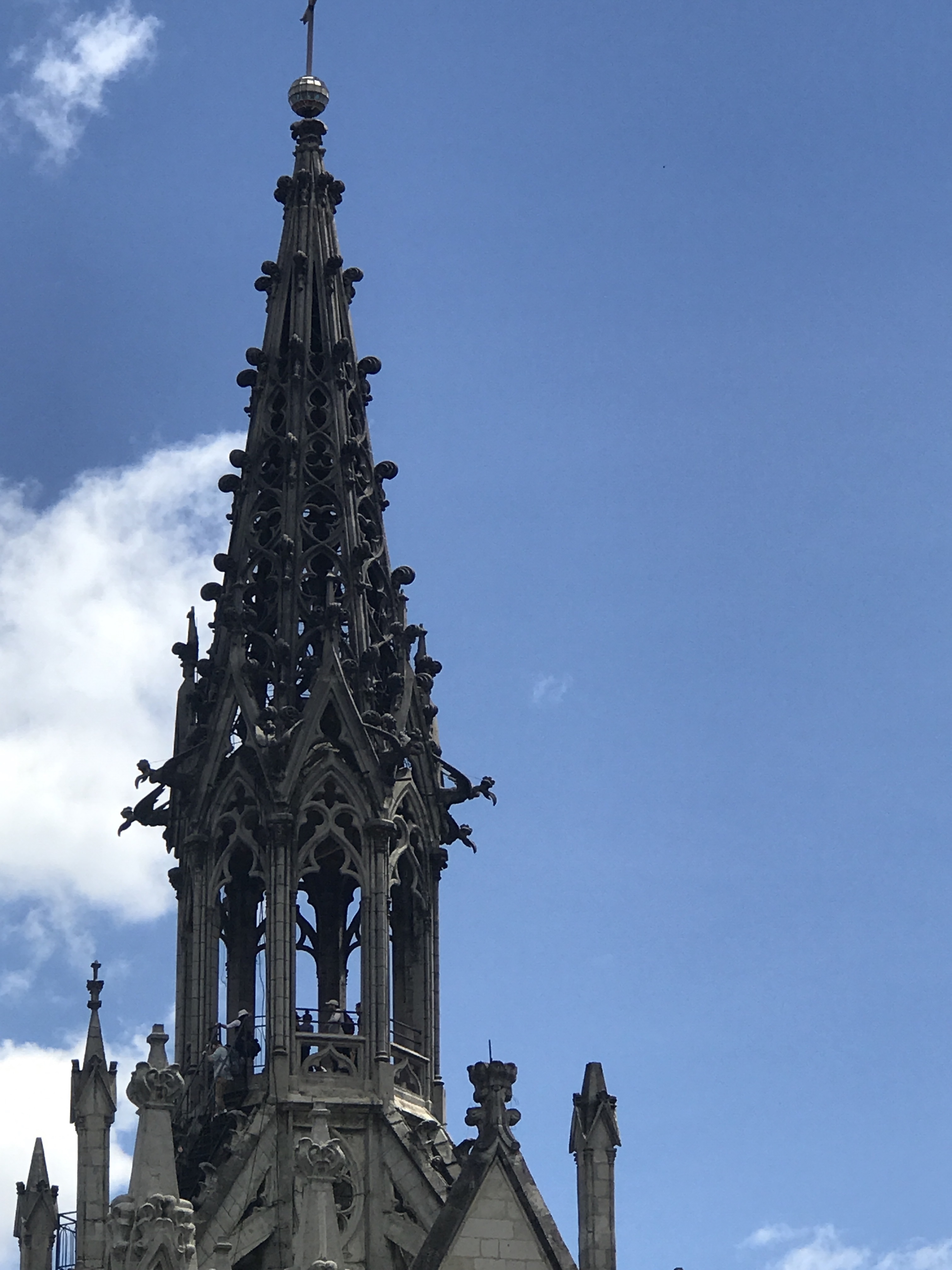 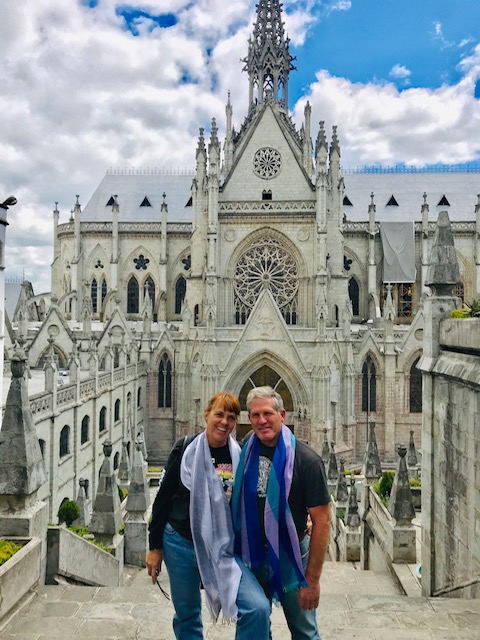 We paid the entry fee and went inside to look around.  It is really an amzing structure. But Geneva noted that the seating pews in the Basilica are not aligned with the floor tile design.  She took this video, but really wanted to spend an hour or so rearranging the place so that everything was lined up!  HAHAHAH

The double-decker bus also took us to the mountain on the edge of the city of Quito that offers wide-reaching views of the entire city. This giant, concrete Virgin is one of only a few in the world that include wings. I didn’t quite understand the story of why the artist created her with wings, but she is very beautiful!  And the views of Quito are amazing. 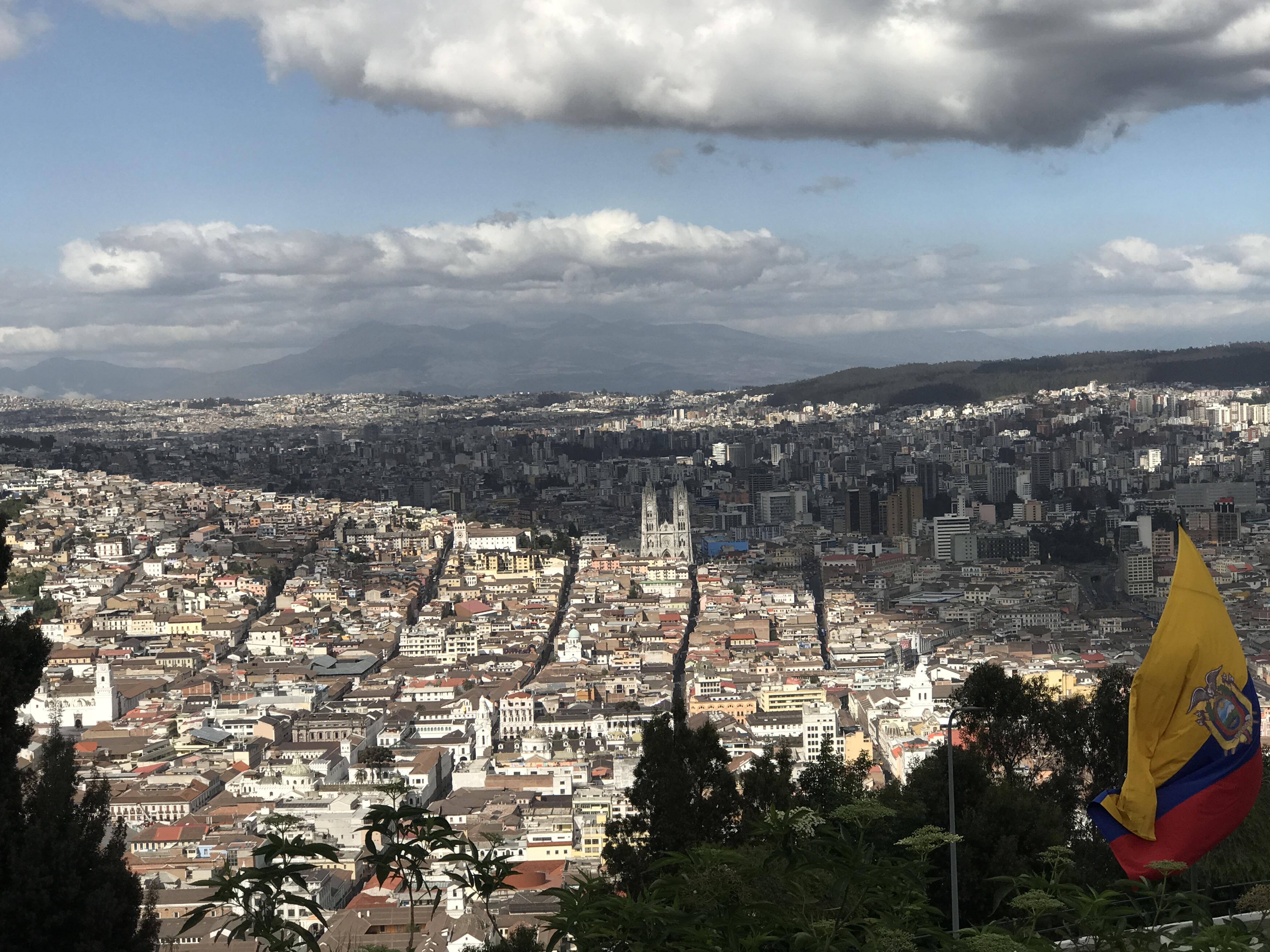 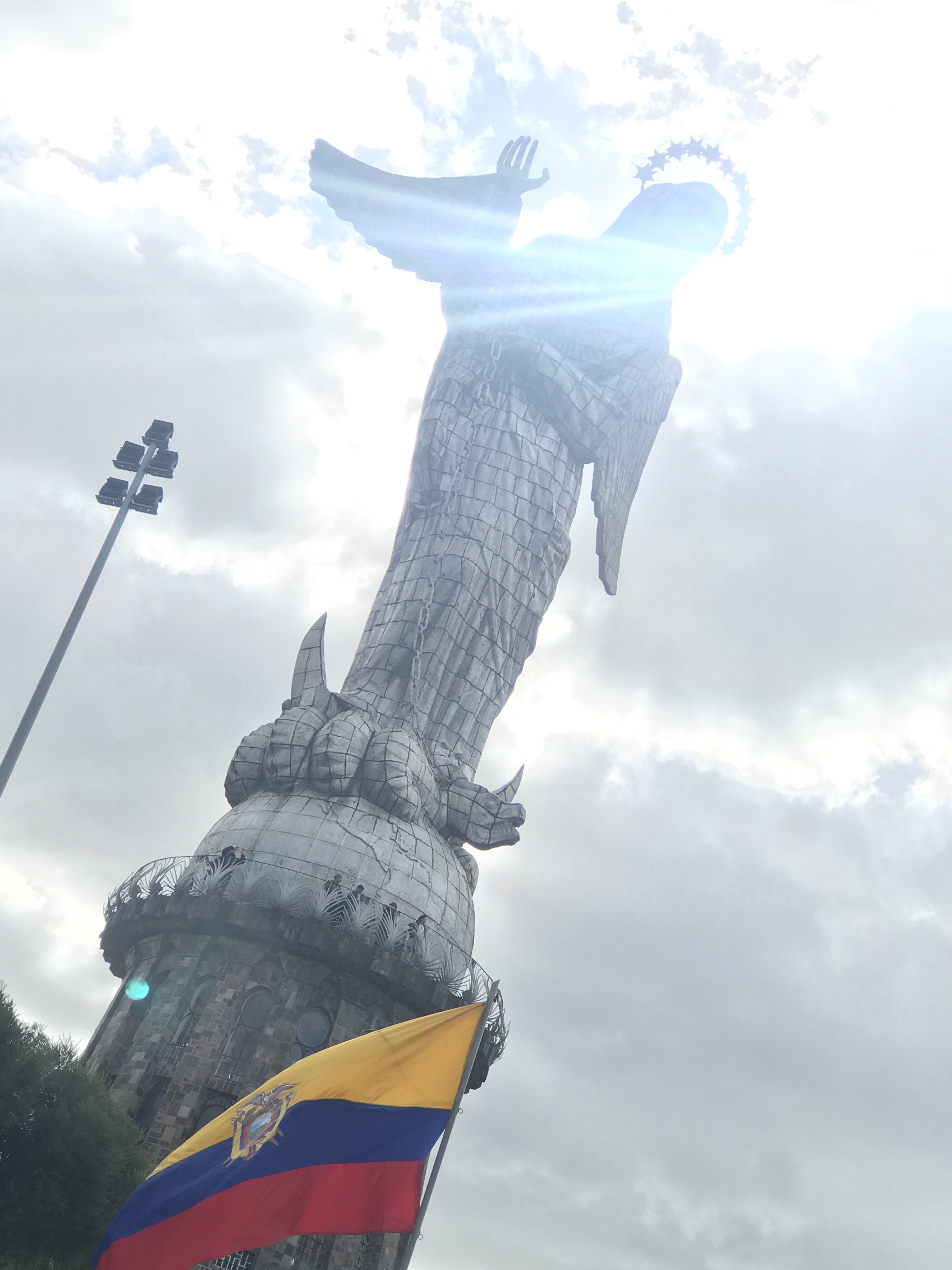 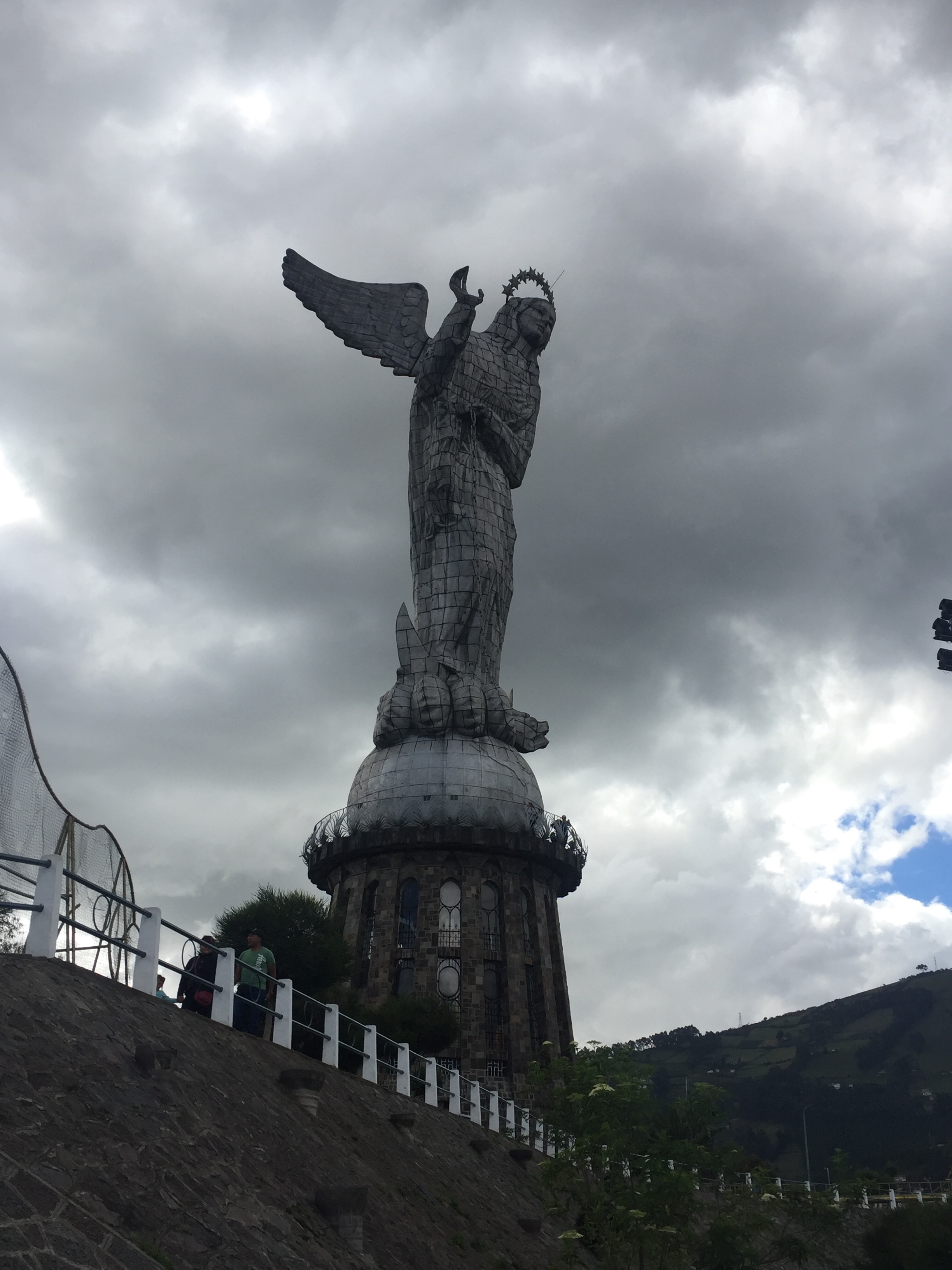 We also spent some time just hanging around the city, shopping, eating out and enjoying a very clean, friendly, large city! Shopping for car parts, watching neighborhood soccer games, waiting outside the mall, observing sidewalk dog walkers, are all part of life in a big city! 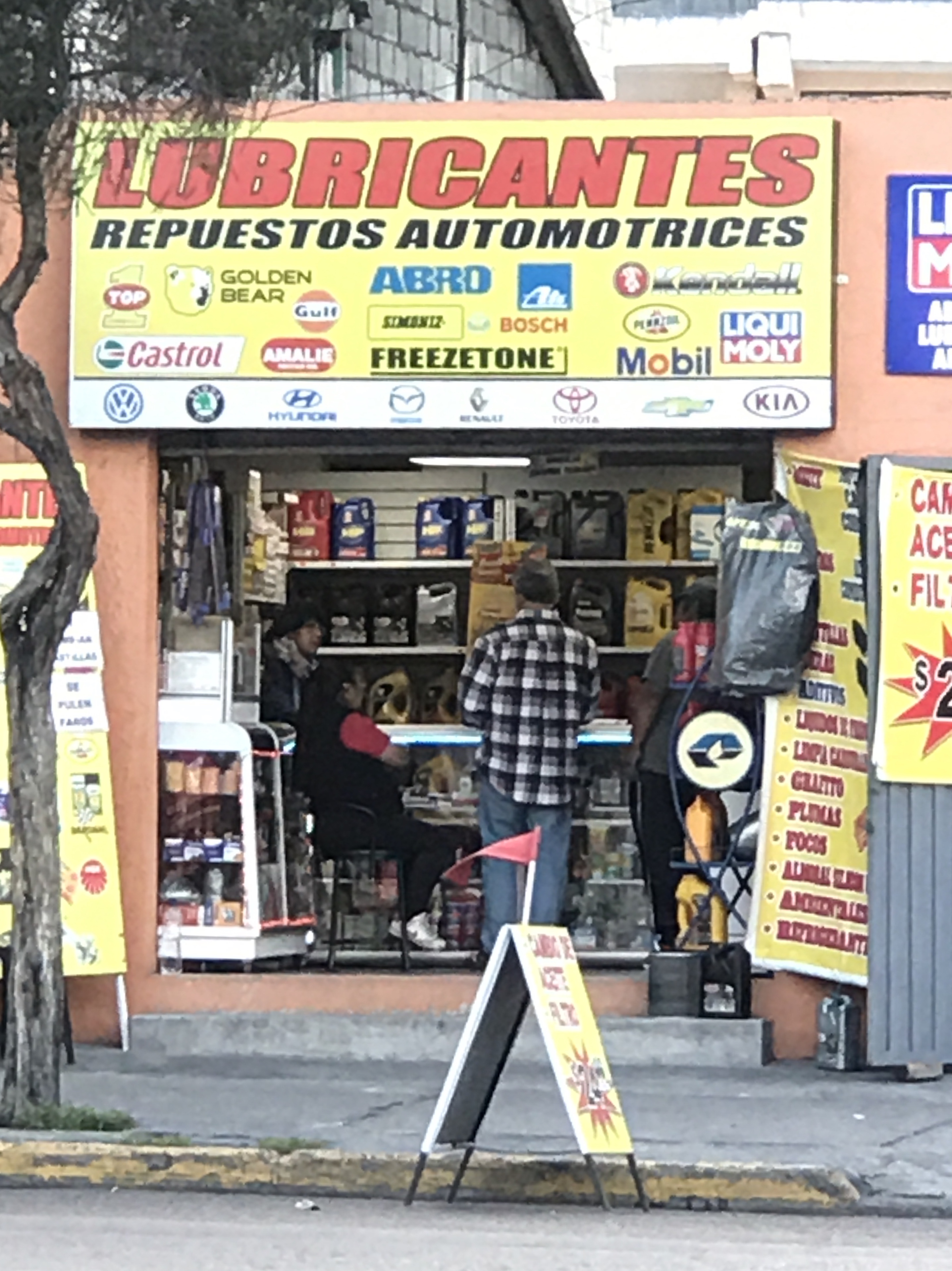 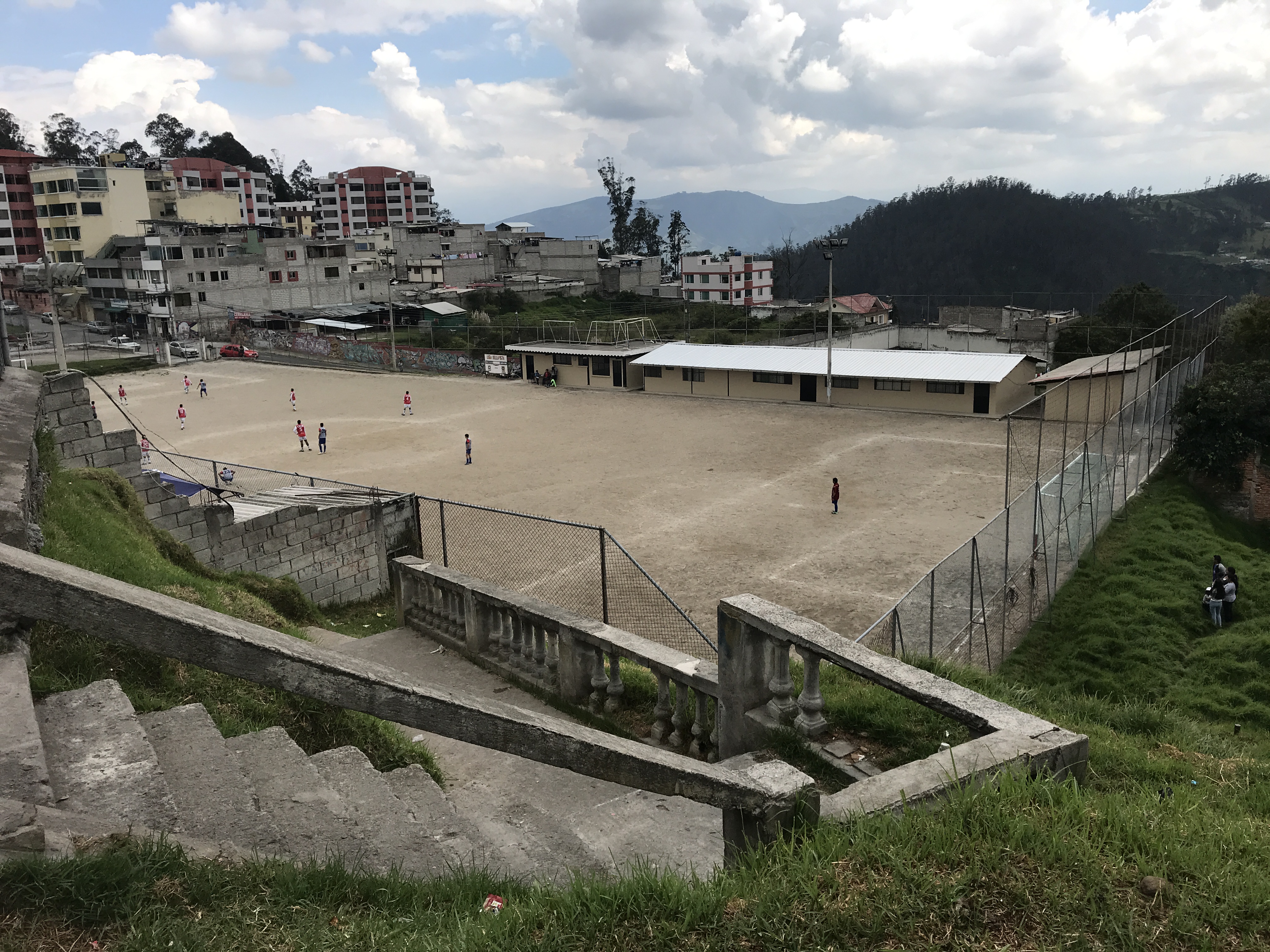 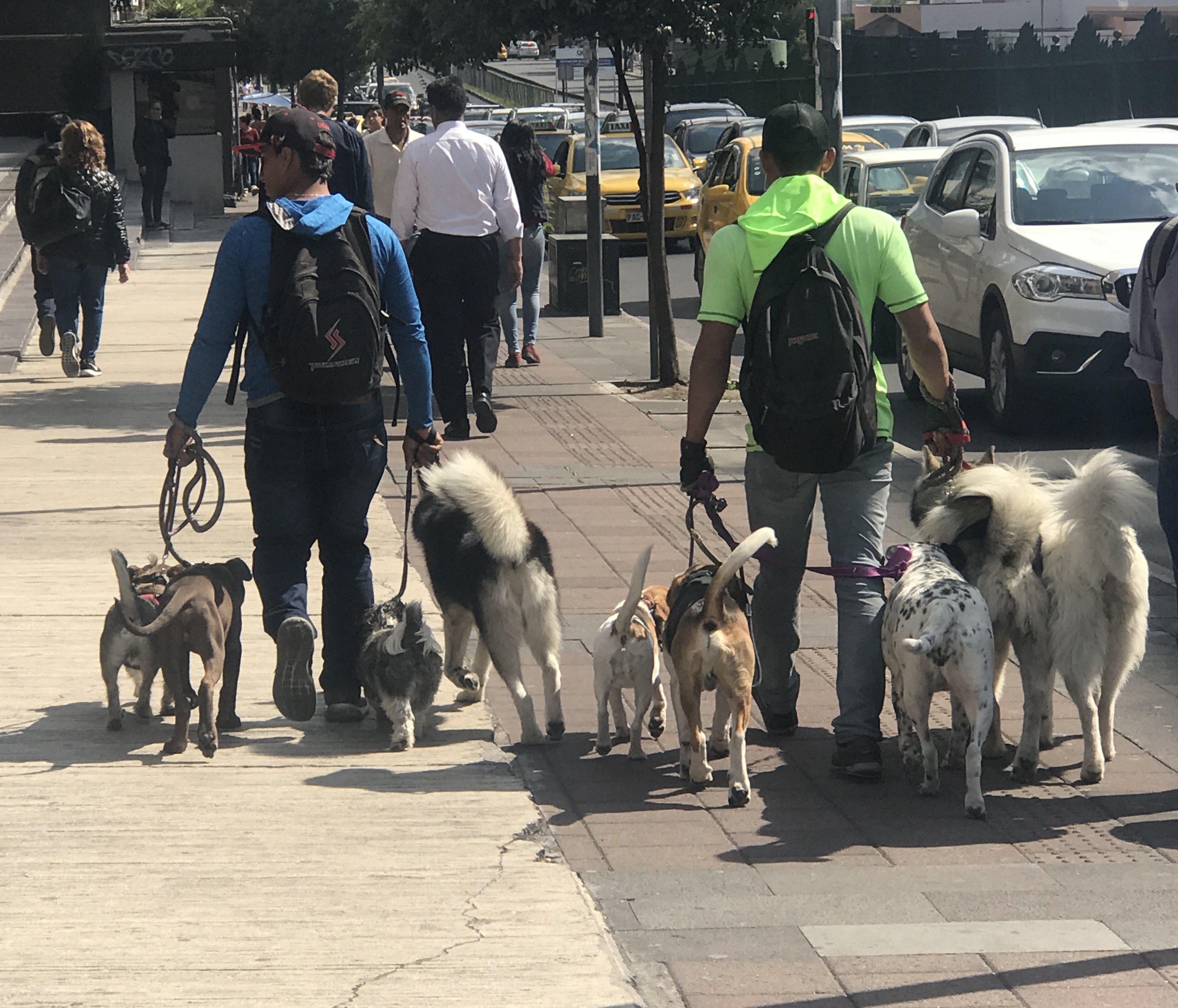 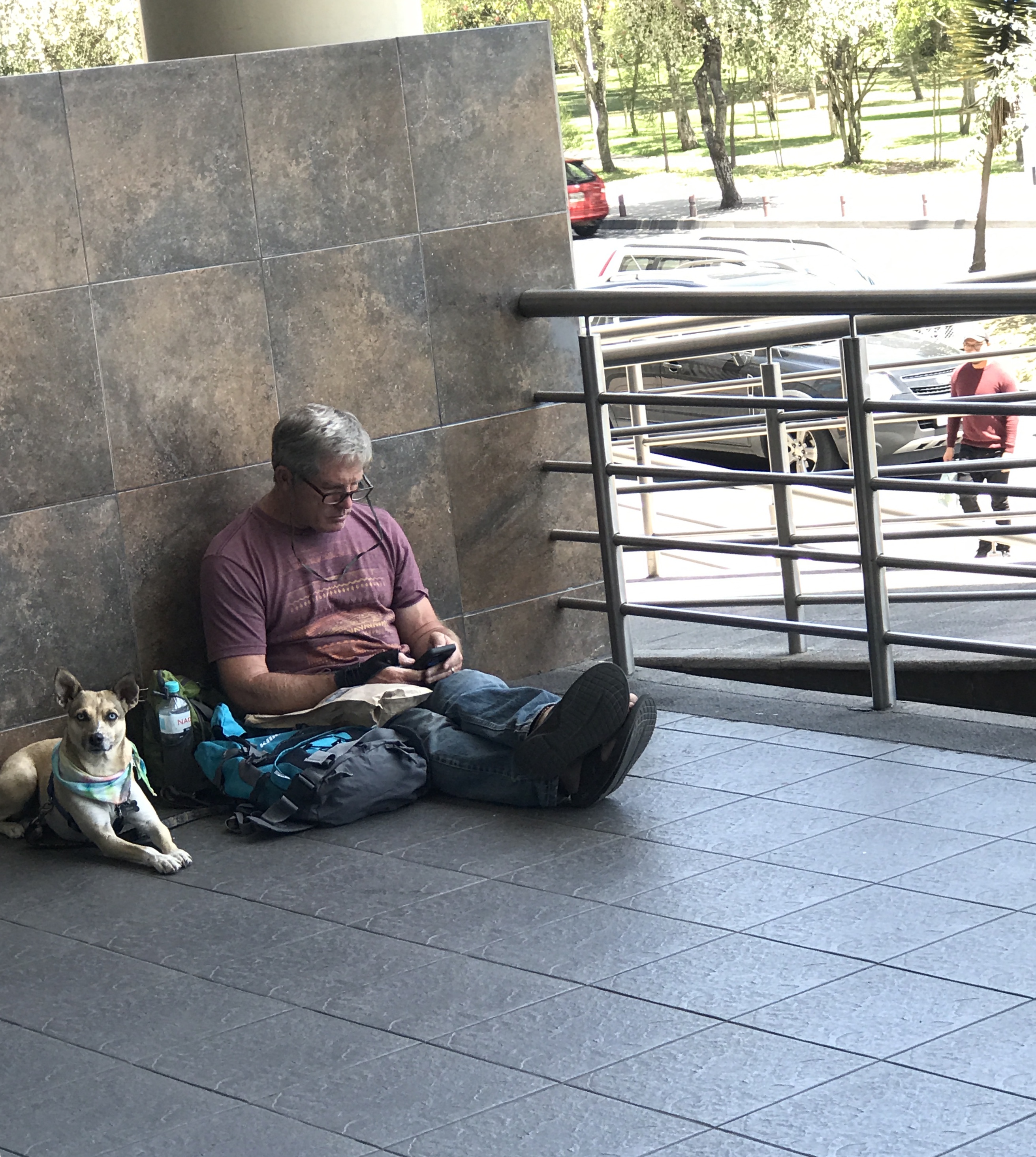 We actually returned to Quito twice, so I combined both visits into this one story. And we may go back there again, but I will explain that in a later story.

For now, follow us as we head out to explore the central area of Ecuador including the Andes and the Amazon!

2 thoughts on “Ecuador- Quito the capital of the country!”