The area around Salento is known for the wax palm forest. We went there initially to assist a fellow traveler that was experiencing some electrical issues.  Here are Mike and Nica working on another camper. 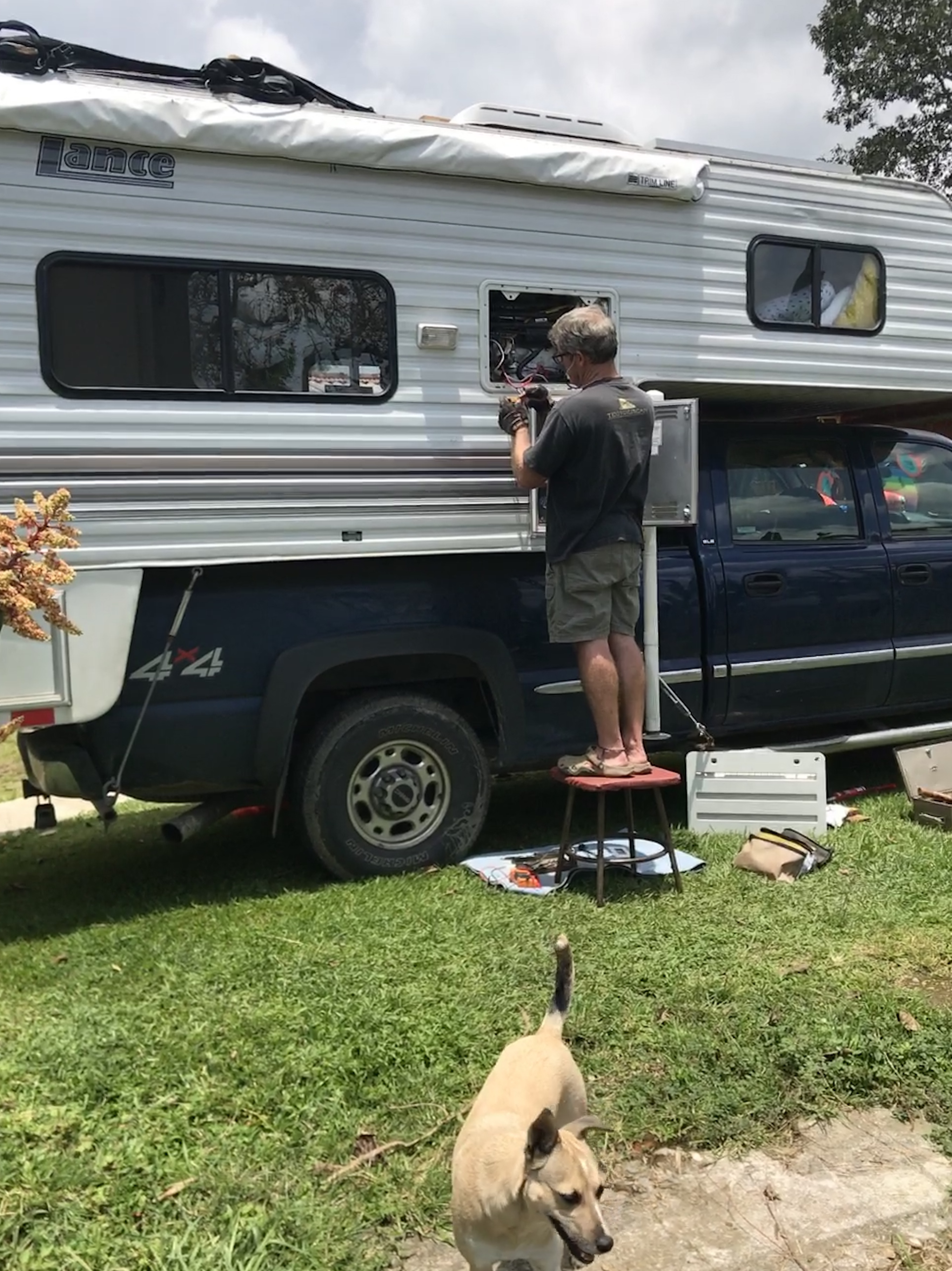 Then we roamed around a bit and took a time out at a lovely camping area. Here Mike took a day to check our brakes because we had been hearing a squealing noise. 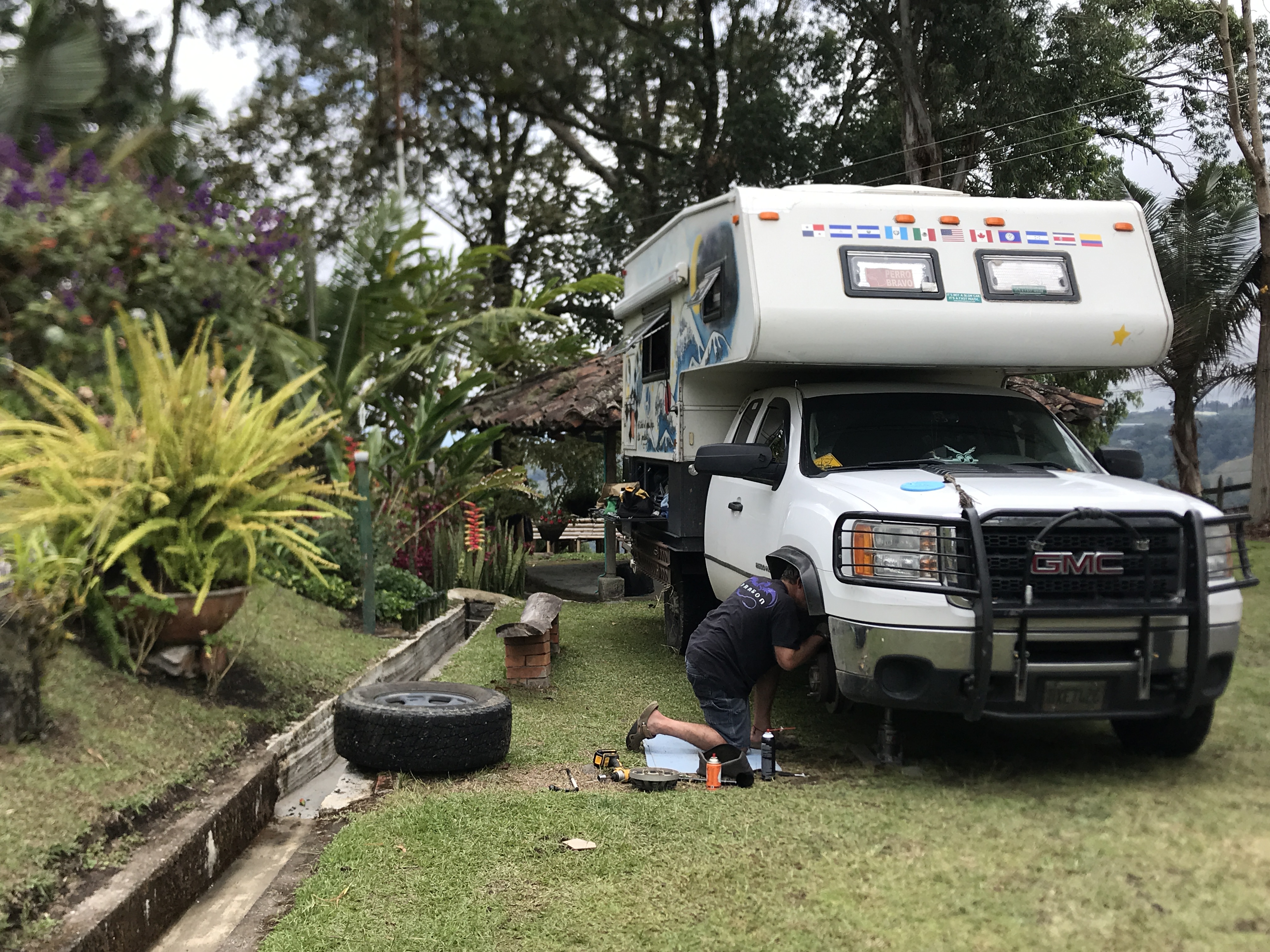 He discovered that a pebble had grooved the rotor, but things will still work fine.   We enjoyed this location for good Wi-Fi and cheap laundry service. But after a rough storm in the night, the power went out, which meant the dryer wasn’t working. We gathered our wet laundry (washed but not dried) and departed.  Watch for the wet laundry to reappear later in this story!

From here we headed down a long dirt road to see the famous wax palm forest from a non-touristy path. This road promised adventure, and it delivered! At the beginning of the road we encountered a Colombian traffic jam. These men and donkeys were delivering coffee up from the valley below. 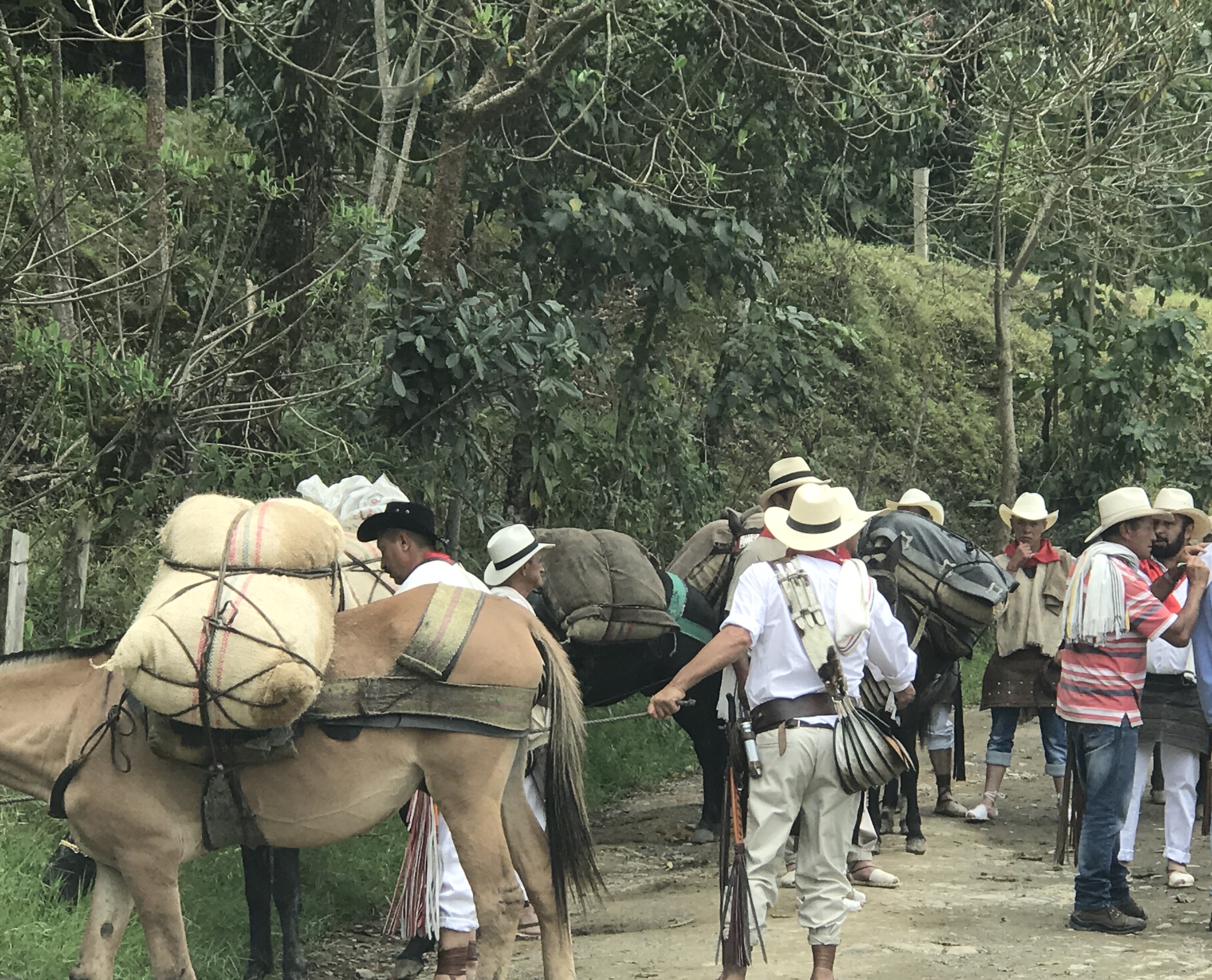 We also saw milk jugs sitting at gates waiting to be filled. There are a lot of dairy farms in this region. 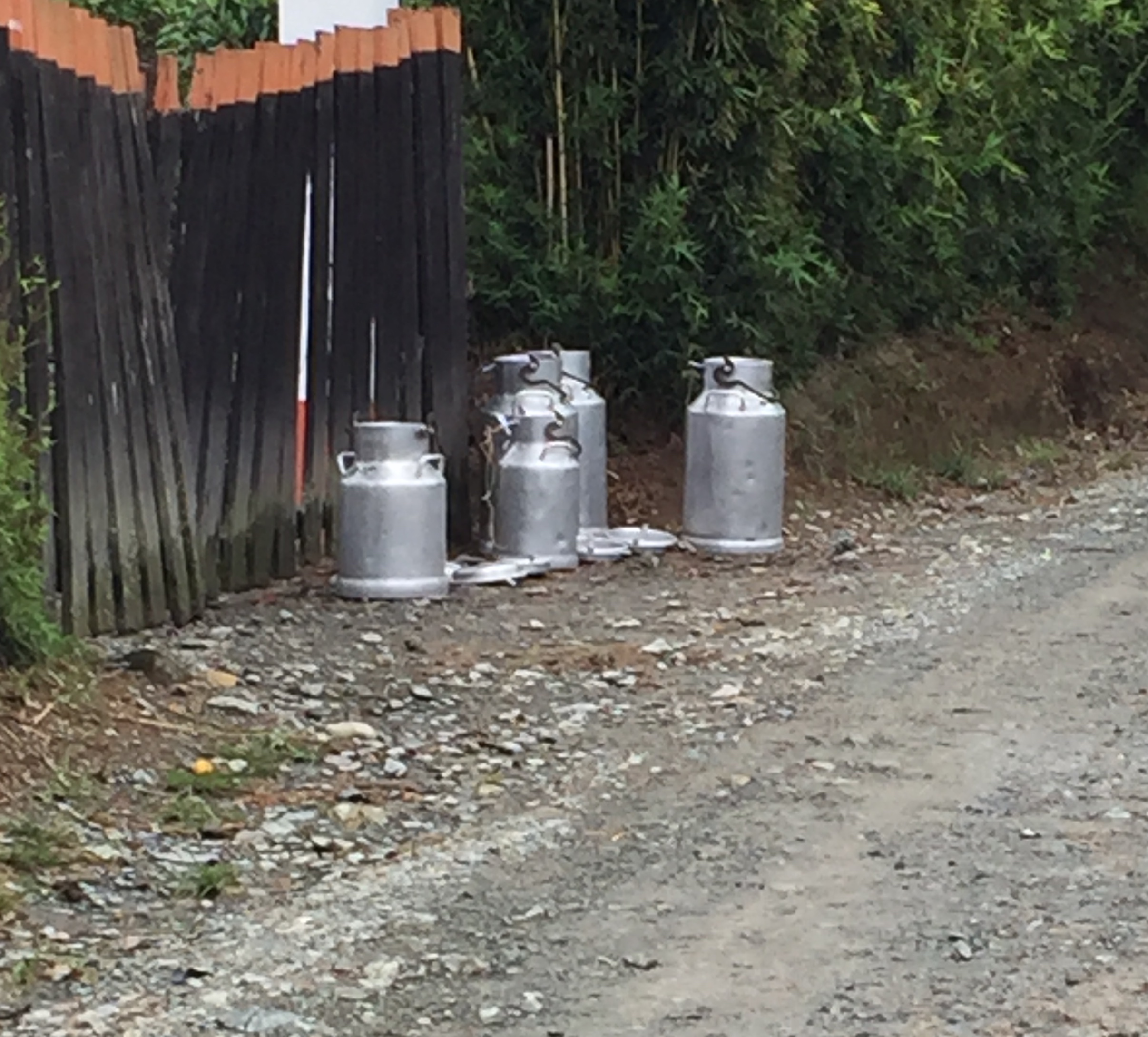 We also passed a large farm that was hosting a horsemanship event. The roadway was clogged with stake-bed trucks and horse trailers.  They were parked along the sides of the rutted dirt road.  The beautiful pasture was surrounded by a stacked field-stone wall and filled with regal horses and their handlers prepping for the show. 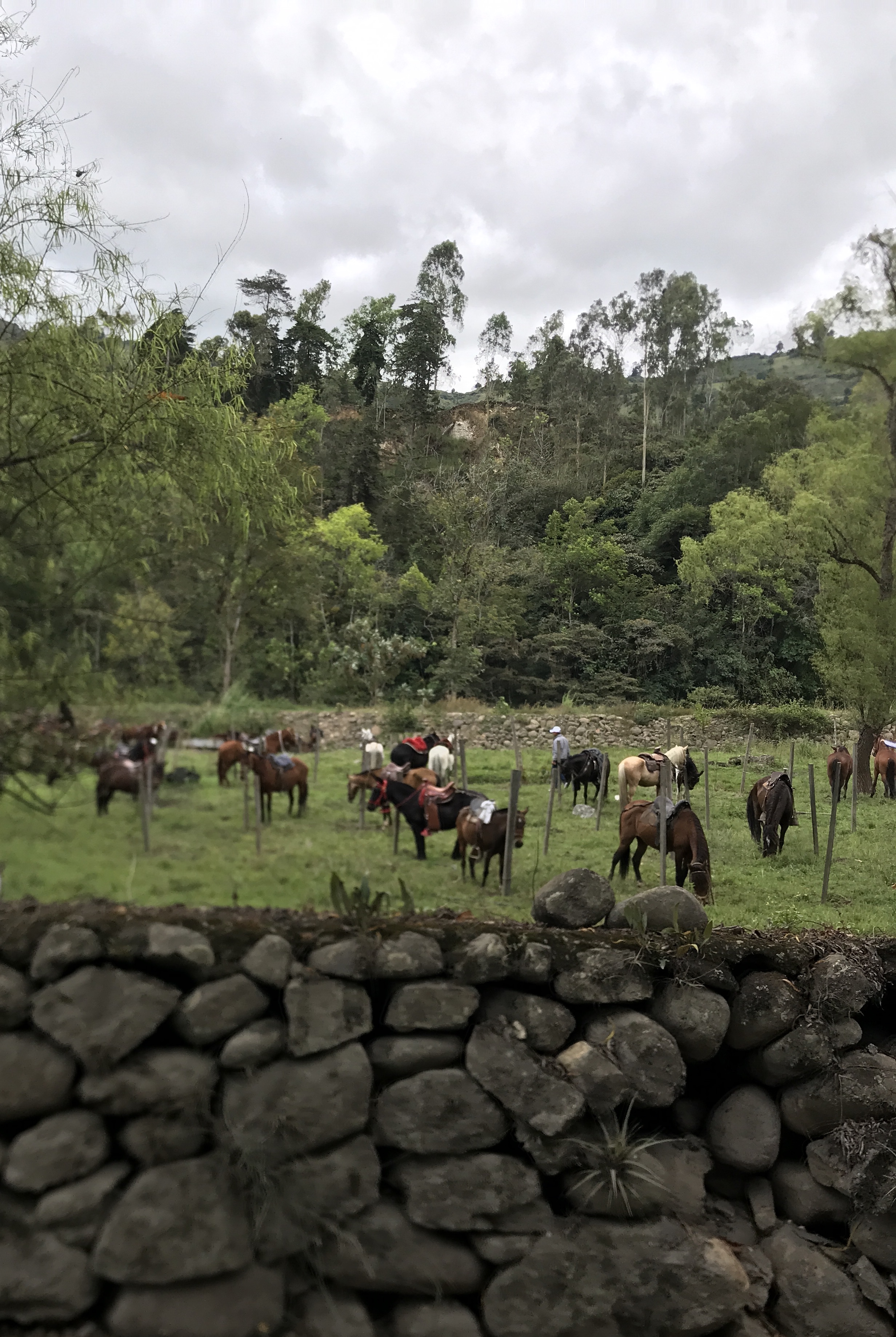 Our first stop along the road was an isolated, beautiful, forested campsite. 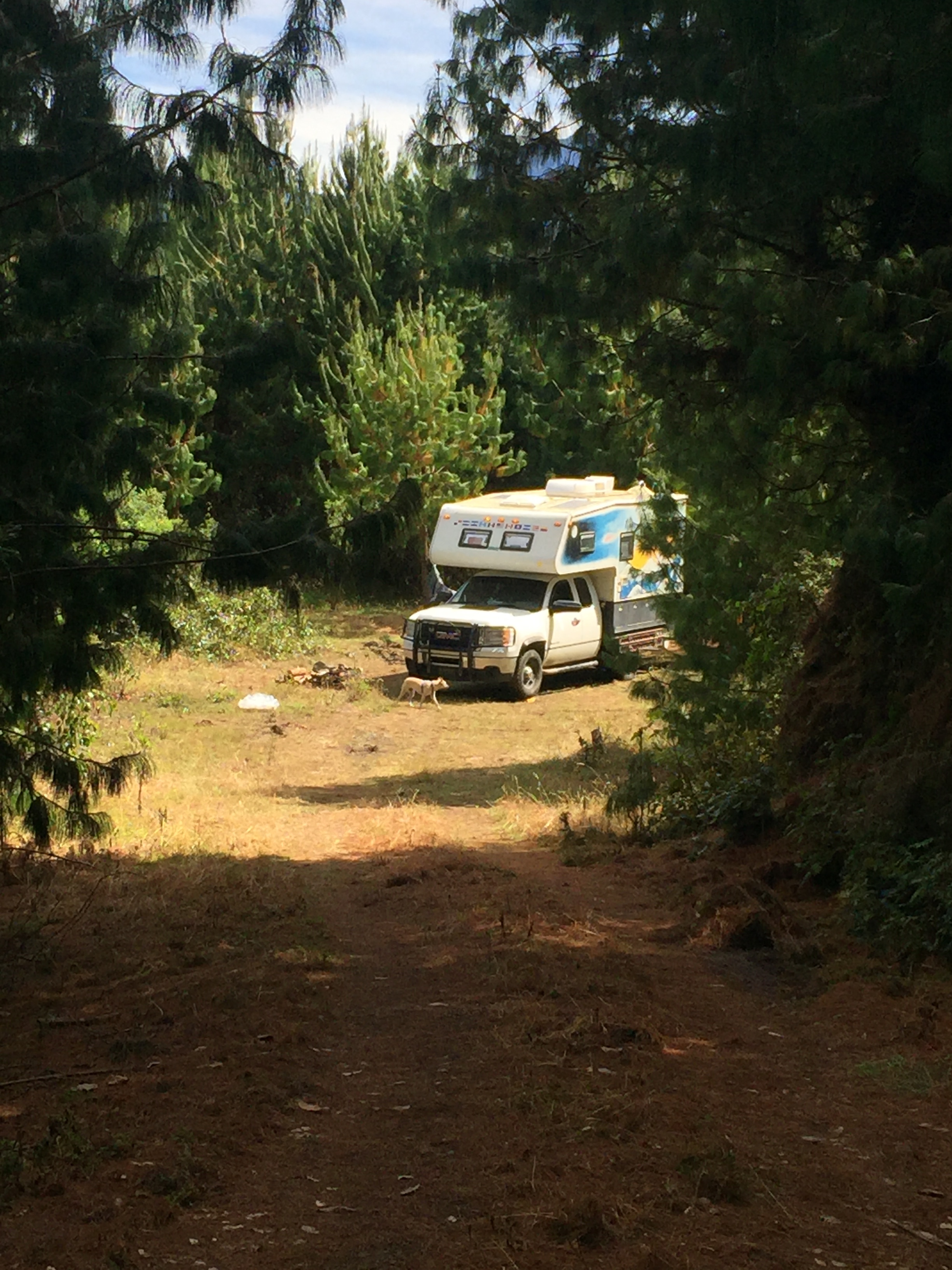 Nica hopped out to check the campsite for discarded bones, new smells and other dog delights. We got settled, leveled the truck and then hung out our wet laundry in the sunshine. 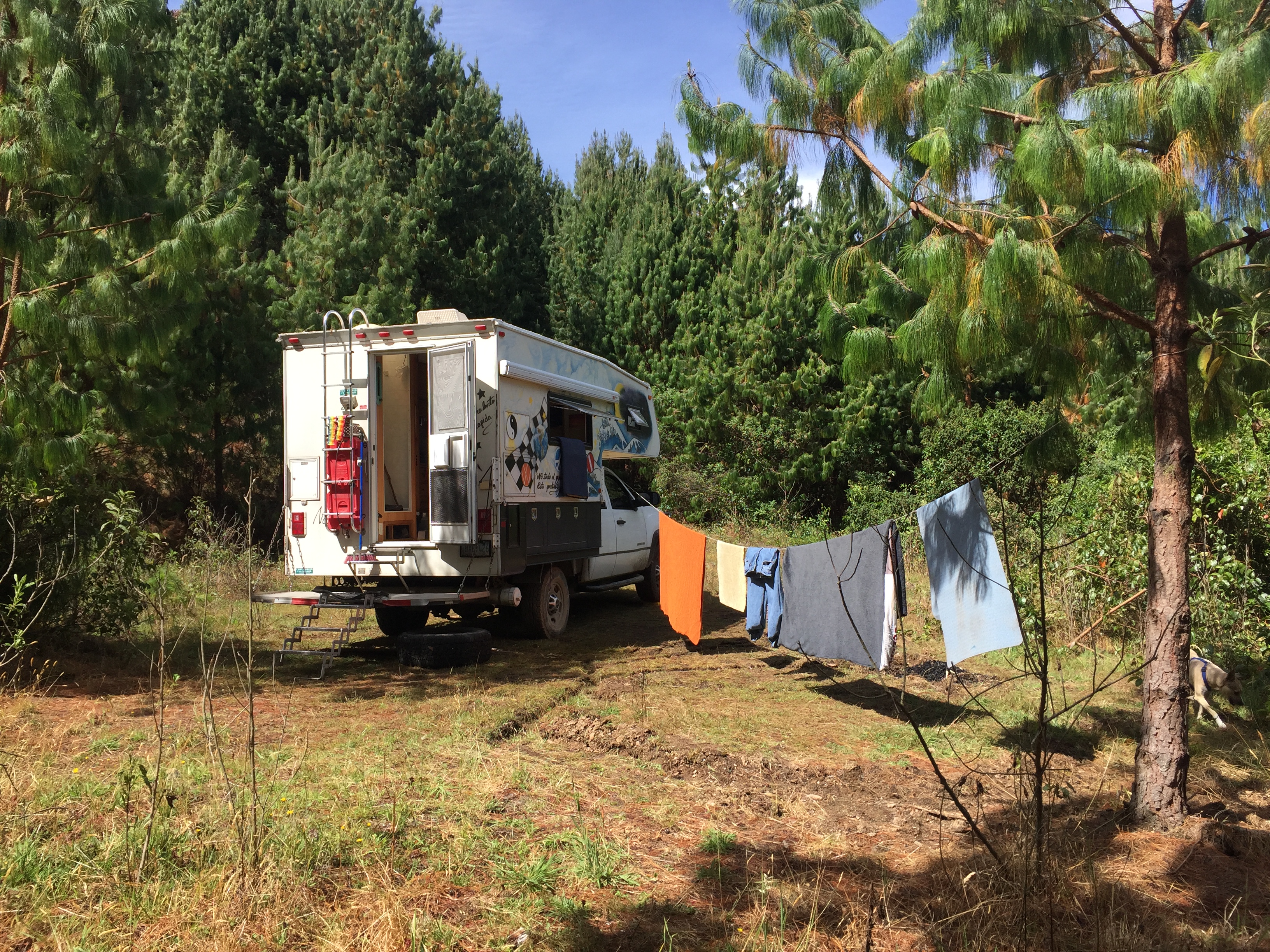 Suddenly we heard a hissing sound and realized that we had a tire going flat. Racing the minutes before sunset, Mike worked to change the tire. By dark, all was well and we enjoyed a starry night in the forest.

The next day we bounced along, as the road got worse and worse. Clearly there had been a lot of rain since the last traveler wrote a report on iOverlander about this road. Although there was a sign for a grader, it was clear that none had passed by in a long time! 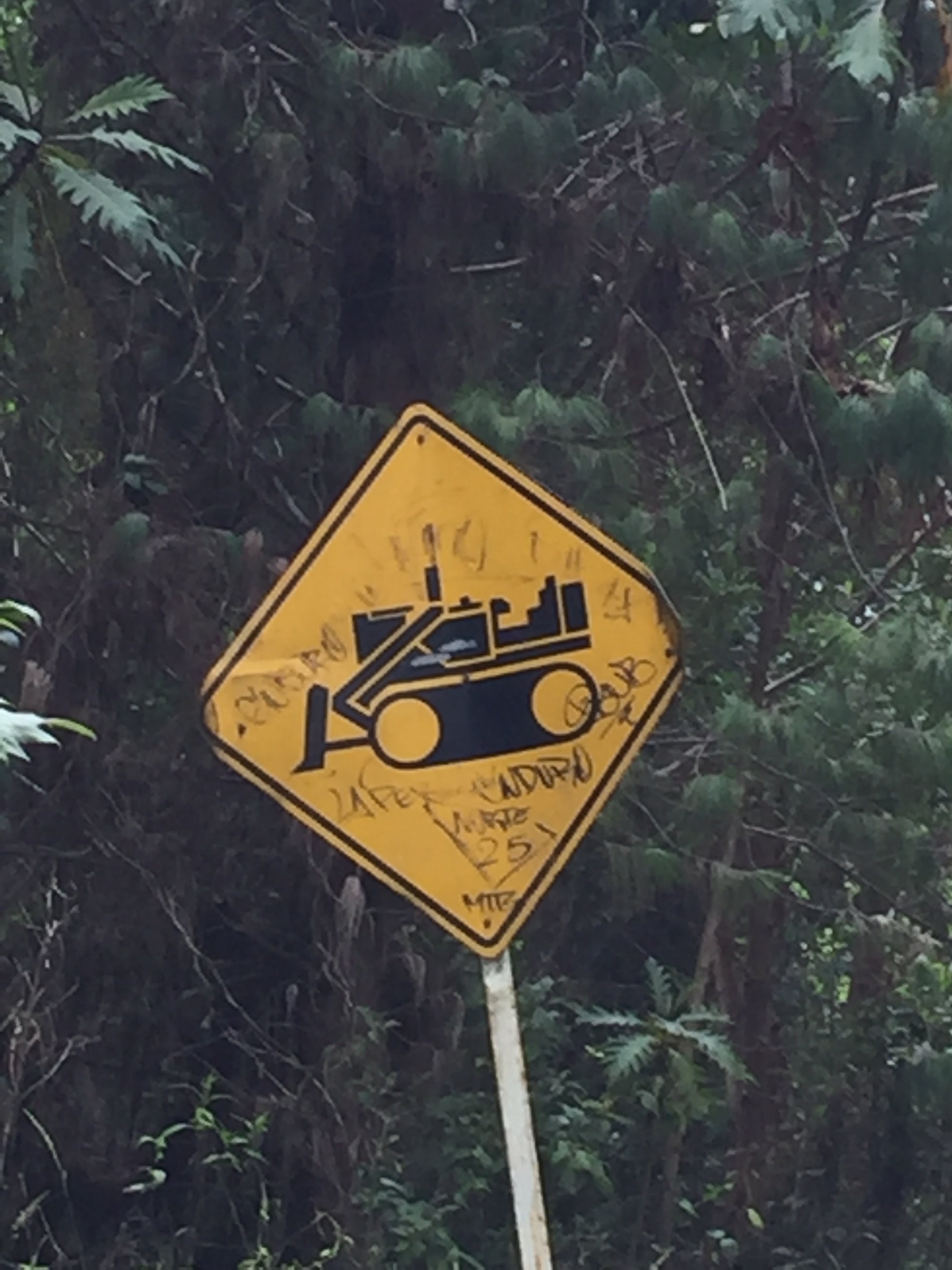 We parked at the crest of the hill to look out over the mountains. I found this interesting shrine in a small cave in the mountain. 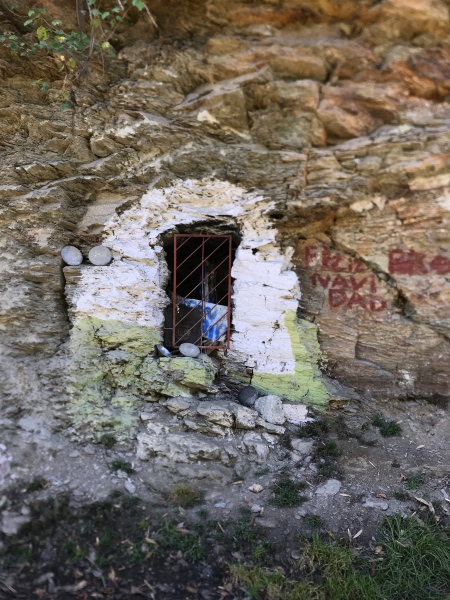 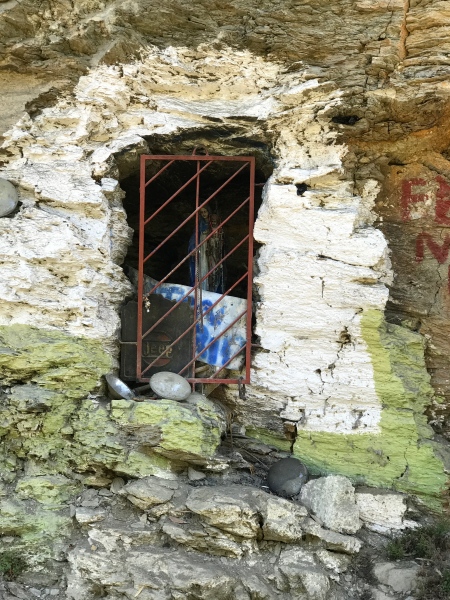 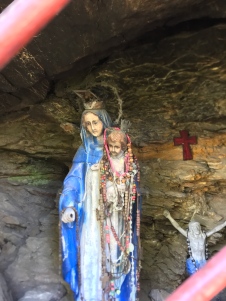 Around the next bumpy curve, the wax palm forest was revealed. 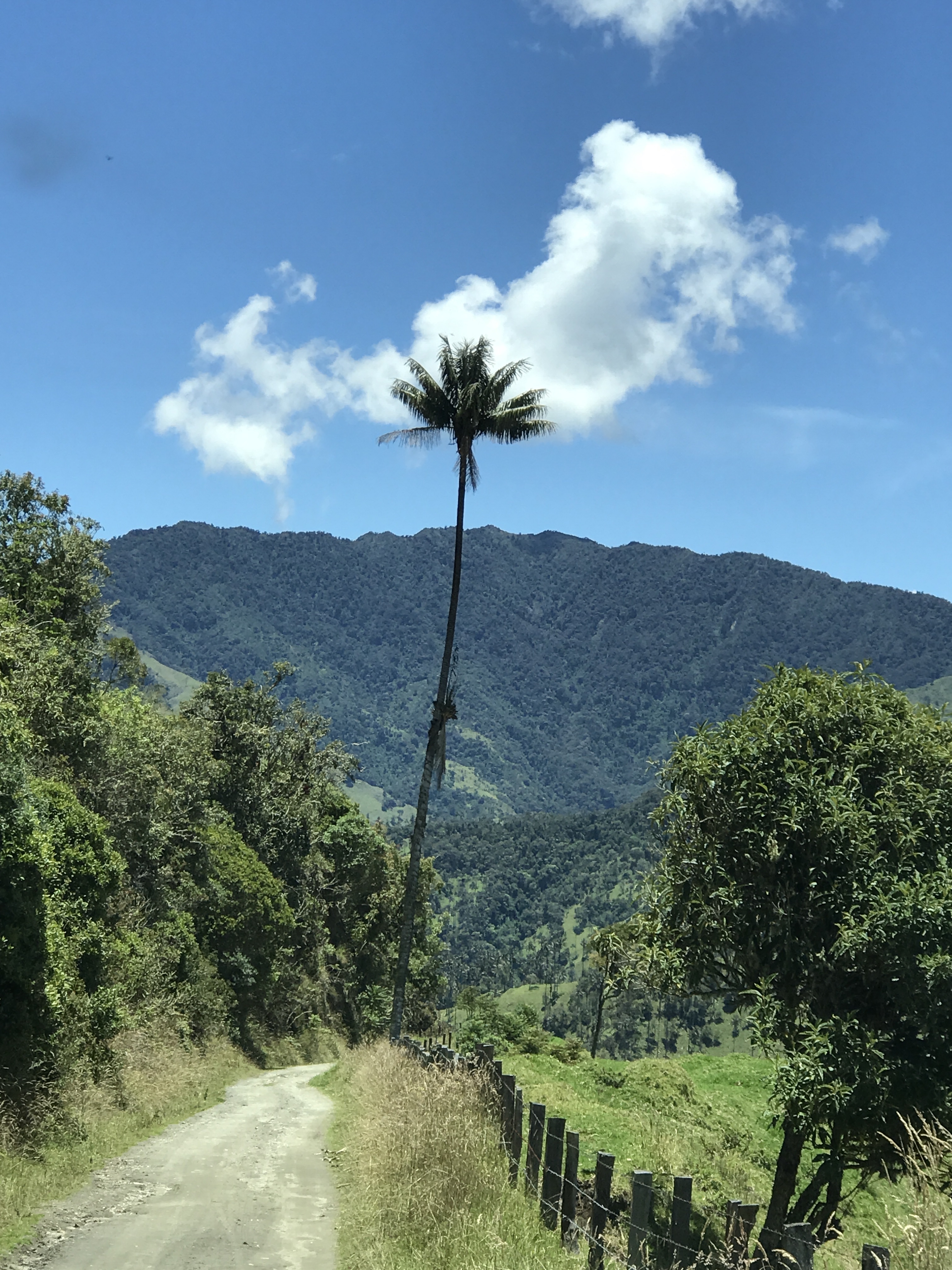 These tall, strange-looking trees appear Dr. Seuss-like as they emerge from the grassy hillsides.  Cows graze around them, oblivious to their appearance.

In this photo you can see how small our camper looks in comparison to the huge palms of this region. 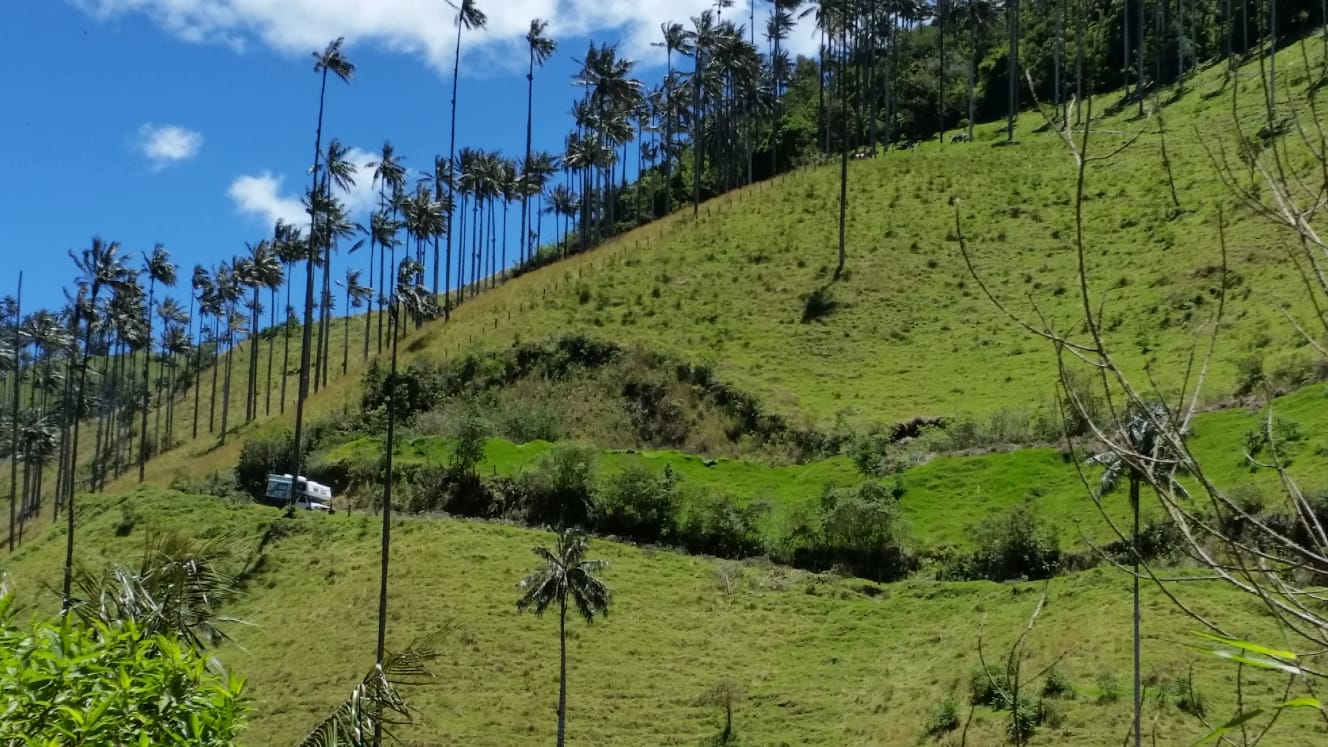 The anticipated four-hour drive had stretched into nine hours.  We had straddled deep ruts, bounced through huge holes, 4x4ed through long mud bogs and even driven cautiously through repair zone preparing to pour concrete, bending the rebar frame as we passed over it.  Then we finally encountered the main highway and entered the heavy traffic of a big city.  For a glimpse into the road, take a look at this link on our Facebook page (click here, it will open in a new window) Driving a section of the rough road.

We found a beautiful camping location in the city of Ibague and relaxed for the night. The next day would be used for vehicle work and systems checking. We needed to be sure that no damage had occurred on that crazy road!  The beautiful camp-dog, Maluma hung out with Mike as he started to work on the truck. 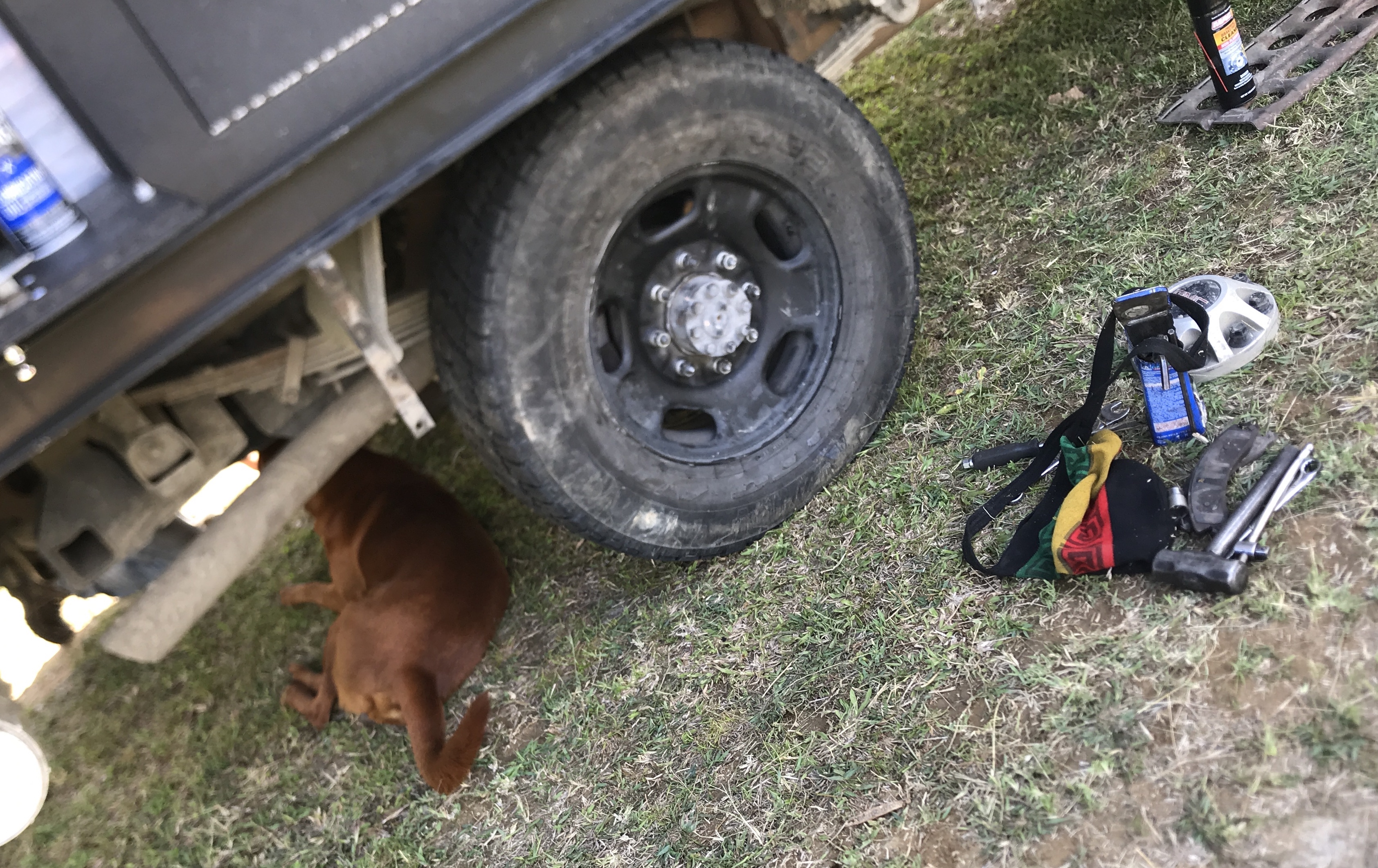 The first task was to check the electrical system. This included a few basic tests; confirm good connections of all cables, test output of all four batteries and add water to cells as needed. At this time Mike also replaced all the spark plugs in the engine. 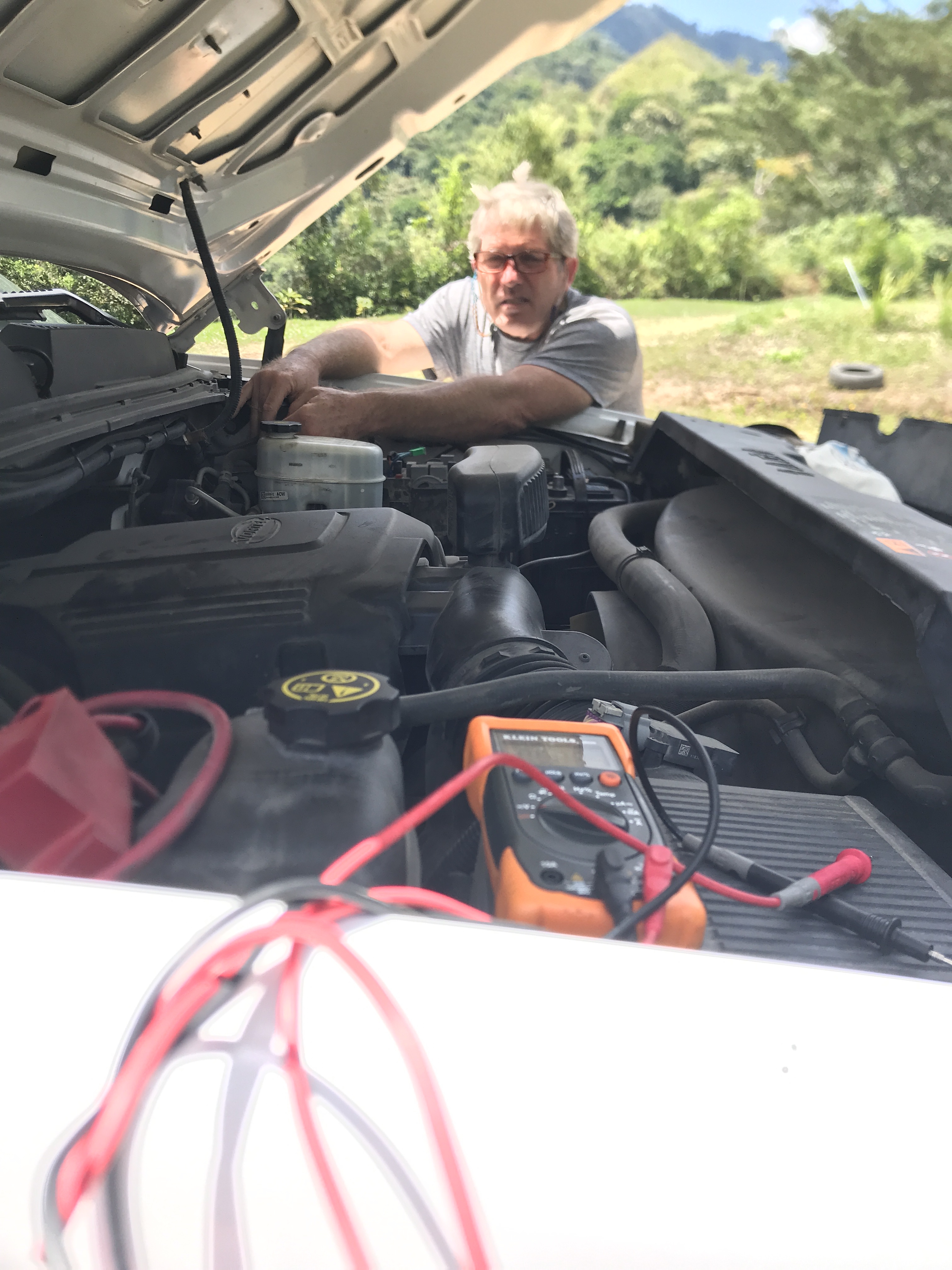 The next task was to replace the rear brake pads. A local mechanic came to assist and once the right tools were found, this job was completed quickly. 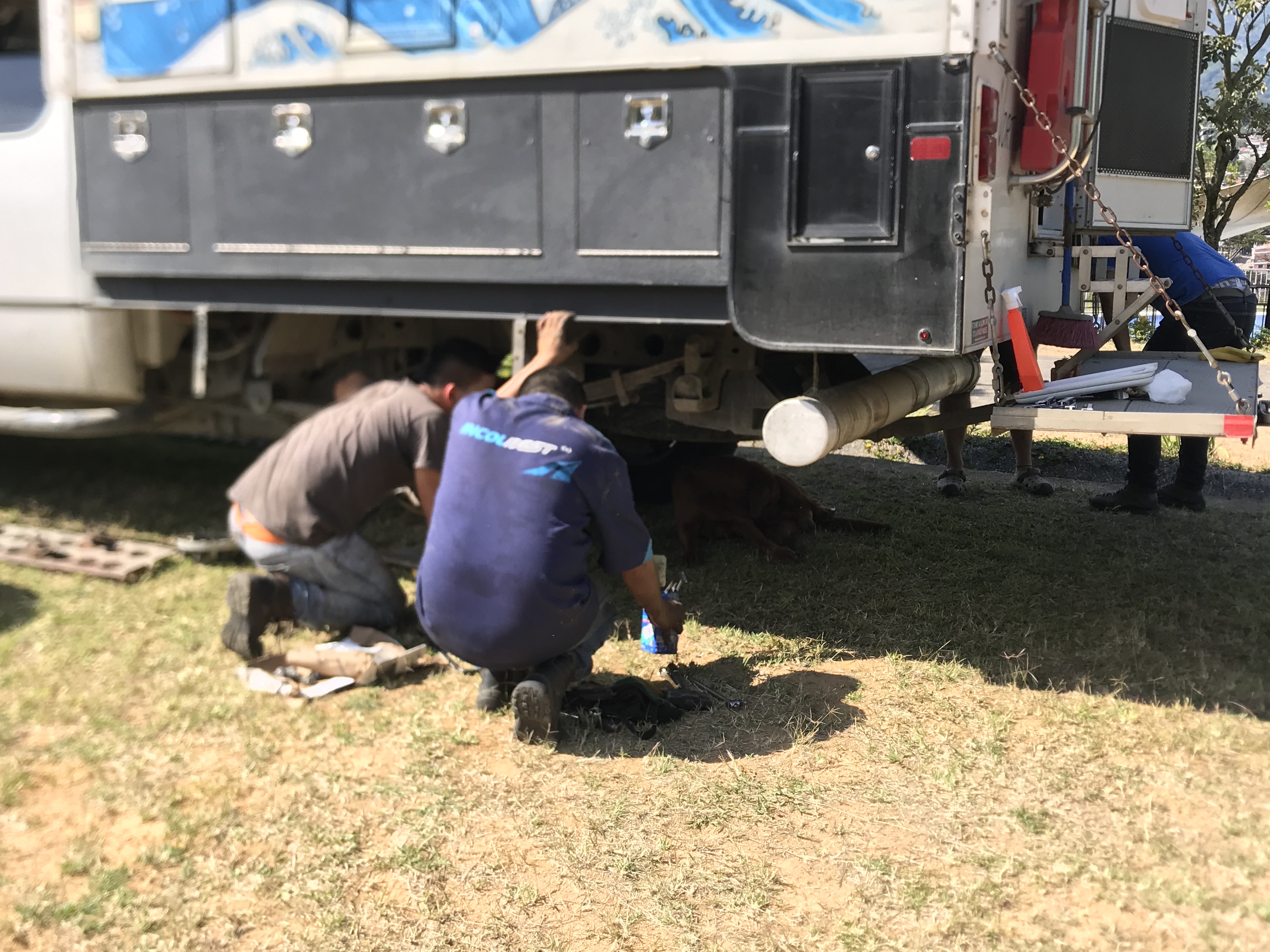 While the metal decks and rear wheels were off, we crawled around under the truck to inspect the suspension, frame, camper and subframe. Unfortunately, we found some damage that the rough road had caused. Two frame-mounting brackets had developed serious cracks from the flexing and bending. These would need repair right away.

These are the brackets that a pickup truck bed would be bolted to.  But in our modification they are some of the brackets that the camper is mounted to.  There are many more, so we were not at risk of a disaster, but repairs were needed.  Some quick research on iOverlander showed a well-known mechanic nearby in Bogota. Although we had intended to avoid the capital of Colombia, fate was taking us there anyway! Pack up for some time in a bustling South American city!