Leaving El Salvador was difficult. Not because the border crossing was tough, but because we really enjoyed the country. But as it turned out, Honduras was pretty amazing also.

Our first big stop was at the city of Copan Ruinas.  This city is the home of the wonderful Copan archeological site.  We found a campsite on a small farm.  We were there for Mike’s birthday.

Of course, birthday gifts are impossible at our age, so I got him a small racetrack set which he could re-gift right away. The farm had an adorable little family living there. The farm manager was a proud father of three cute kids. After Mike figured out the plan, he had great fun showing the kids how the racetrack worked and playing cars with the kids. 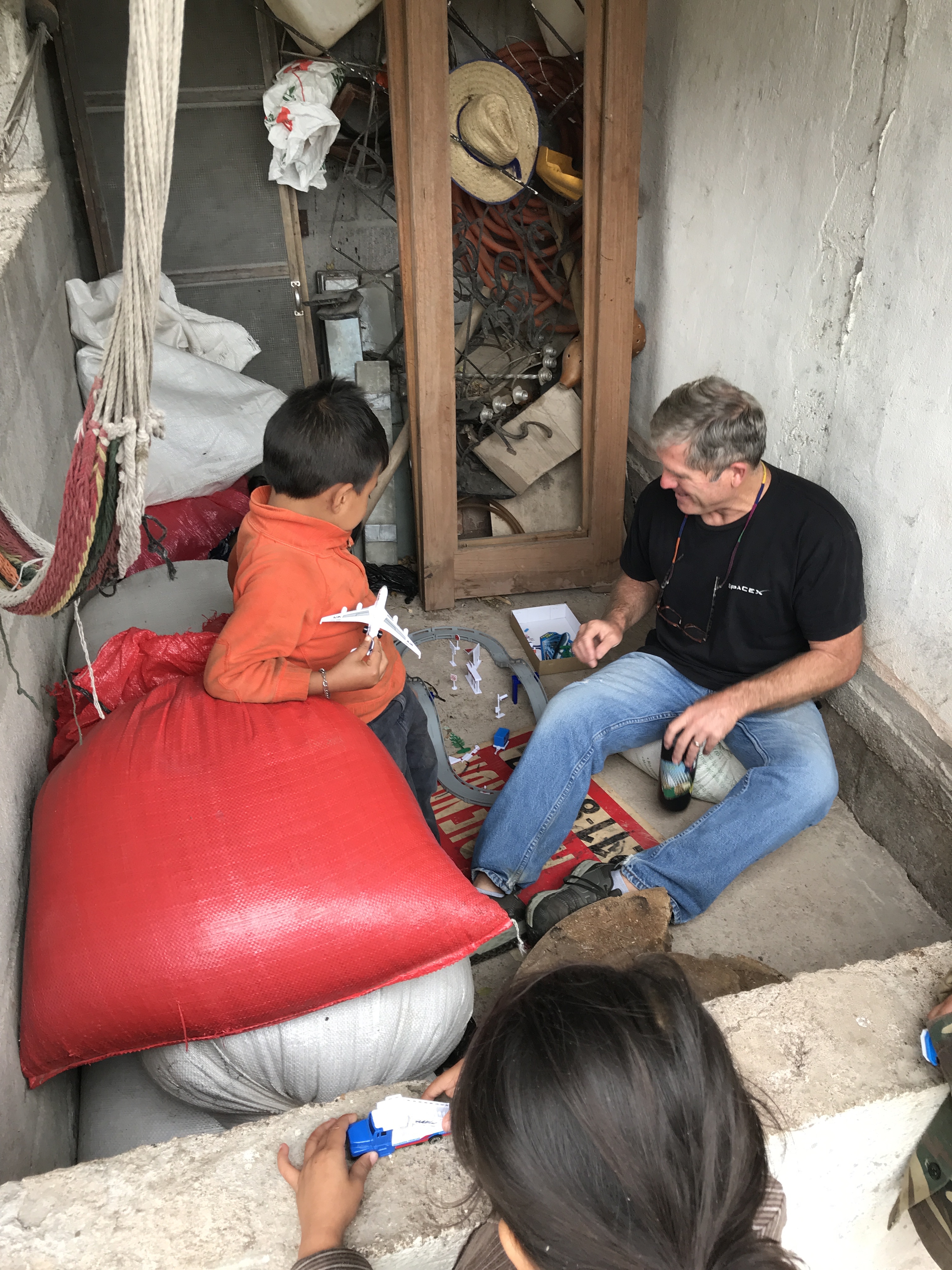 The day after the birthday gift, the farm manager/father brought us a thank-you-gift, a beautiful bundle of fresh radishes from the garden. So sweet. 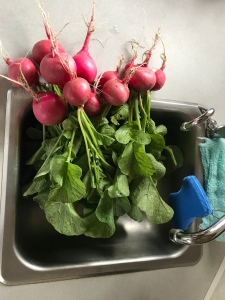 The family had chickens, a horse, a few puppies and kittens and a crazy squirrel in a cage. I thought maybe the squirrel was insane and really wanted out. But one of the kids left the door open and the squirrel just stayed inside eating corn! Here is a video of the crazy squirrel running in his non-existent wheel.

The archeological site of Copan is really incredible. (click here to open a new link about Copan)  It is associated with the Mayan sites that are just across the border in Guatemala. But the Copan site has some unique features.  The museum had many artifacts and the restored and unrestored ruins spread across the archeological site had us mesmerized.

This is a view of the restored vs unrestored main temple of Copan Ruins.

One of the highlights is the red temple that they found inside one of the pyramids. This structure has been named Rosalila, and a life-sized replica is on display in the main museum. After they excavated the monument, they decided that the only was to preserve it was to re-bury it. So this beautifully detailed, red edifice lies buried under the largest structure at Copan, left for the future.

Another unique feature of the Copan site is the stairs. These stairs tell an incredibly detailed story of Mayan history. Each stone has an image carved on it, and when read in the proper order the story appears. When these ruins were first explored in the 1930’s they began to reassemble this staircase. However, they did not recognize the significance of the order, so they jumbled up everything above the fifteenth row. (where the throne is located) Since then the scientists have unscrambled the words and read the information, but they cannot reorganize the stairs without major damage to the structure. Additionally since assembling the stairs during the restoration meant turning the carvings and designs forward, the deep grooves are being worn away by the weather. This incredible literary treasure is being lost rapidly. The canopy is designed to help slow the process. But much like burying the Rosalila monument, the only way to save the stairs would be to bury it again! 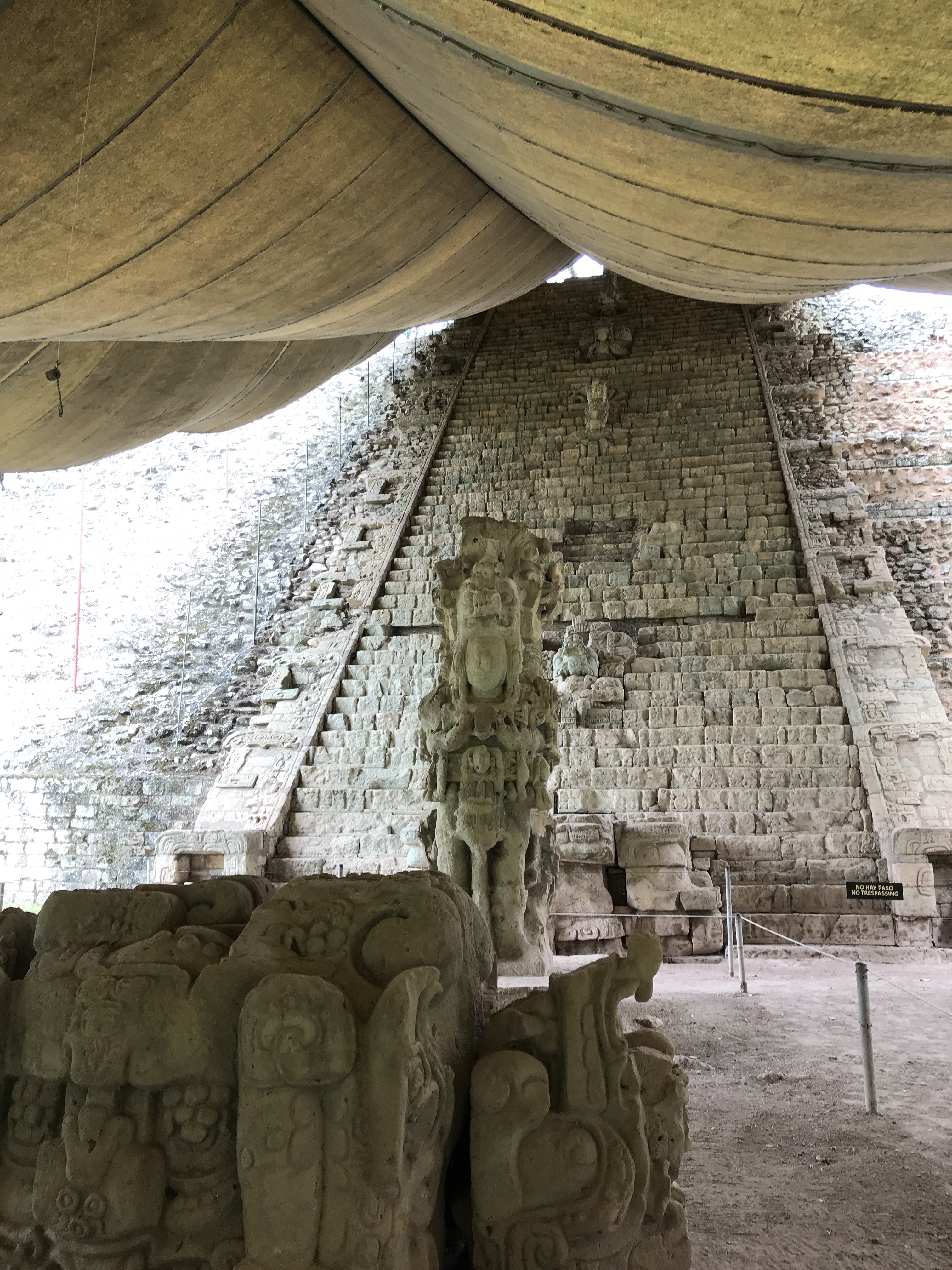 Copan site also has a huge flock of wild macaws roosting and flying overhead. They are loud, riotous birds. But their beautiful red coloring is mind-blowing as it flashes through the jungle overhead.

Exploring the grounds of the Copan ruins was well worth the trip across the crummy, under-construction, pothole filled road to get there.

The highlight of our visit to the town of Copan Ruinas was certainly our time spent with a lovely local family. It started when I sent a message to a local restaurant to ask about a birthday dinner for Mike. I continued messaging with the owner, and she invited us to their mountain paradise for the weekend. So the morning after the delicious birthday dinner, we drove up into the nearby mountains and met the most amazing people! We shared meals, watched television (a treat for us), watched birds and spent hours talking. We also went to the nearby hot springs for an evening soak. Although it was very muddy in the mountains, their little mountain paradise is beautiful. Such a great family, and we feel fortunate to have spent time with these wonderful people. 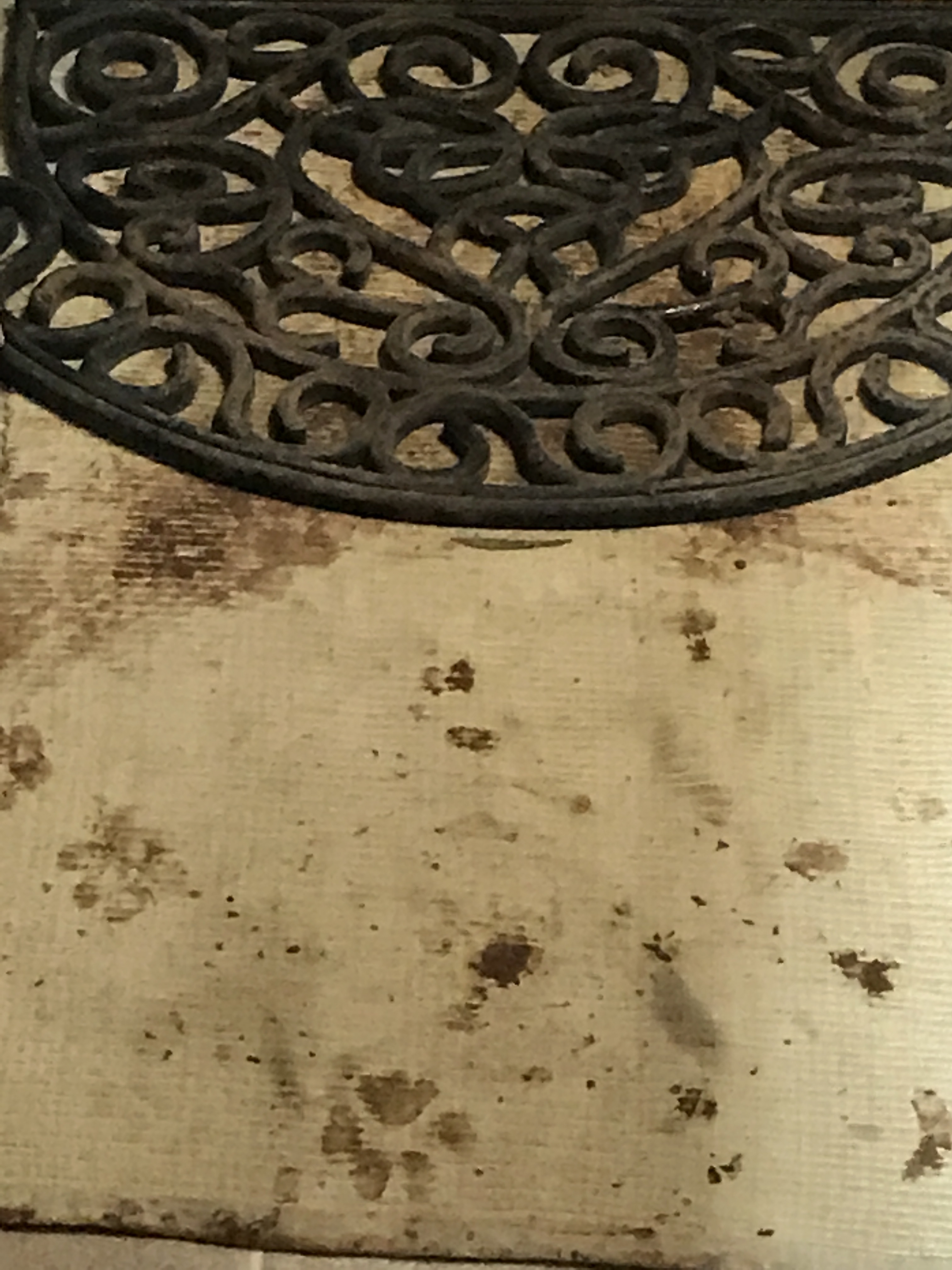 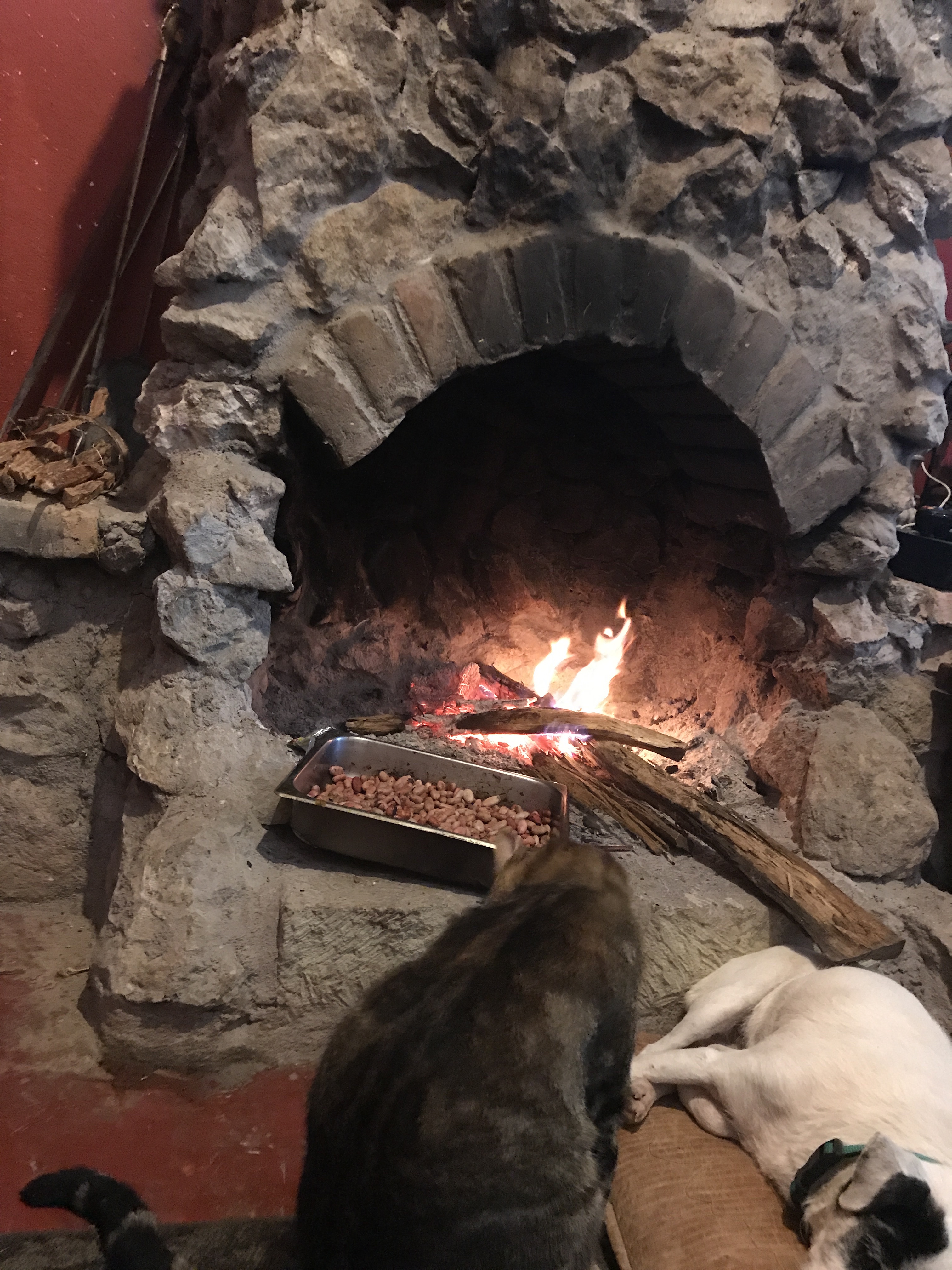 Some of our explorations led us to small towns without camping services. So we parked on the street behind the church. The neighborhood kids quickly noticed us and gathered outside the door to stare at us. There is something unnerving about a group of kids just sitting and staring inside the camper. But they did no harm, and were called home to dinner before dark! Just funny.

After the kids left we walked around town and enjoyed traditional Honduran food.  This photo shows a plate of “enchiladas” on the left (which we would call tostadas) and a taco on the right (which we would call a taquito)  Both were quite delicious and served with fresh pineapple and watermelon juices.

We visited the cute town of Gracias. Atop a mountain over the city is the old fort. This was built to watch over and protect the wonderful town.

In addition to the beauty of the fort, we enjoyed a rock sculpture garden outside. The banana sculpture pictured below pays a grim homage to the relationship between the people of Honduras and the United Fruit Company. This is another example of the USA meddling in foreign civil affairs based on misinformation and misunderstandings. Travel has taught us many things, and we are grateful for the personal lessons as well as the historical lessons such as this.

Parked at a set of thermal pools along side a river gave us an opportunity to soak and relax.  In addition to Zeb swimming in the river and us swimming in the hot pools, we were able to tackle some camper tasks. Mike worked on a few projects. But then we were back on the road.

Here is Zeb riding in the back of the truck. 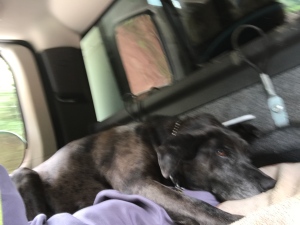 Our drive to Lago Yagoa included a stop for delicious fish and chips at Honduyate. 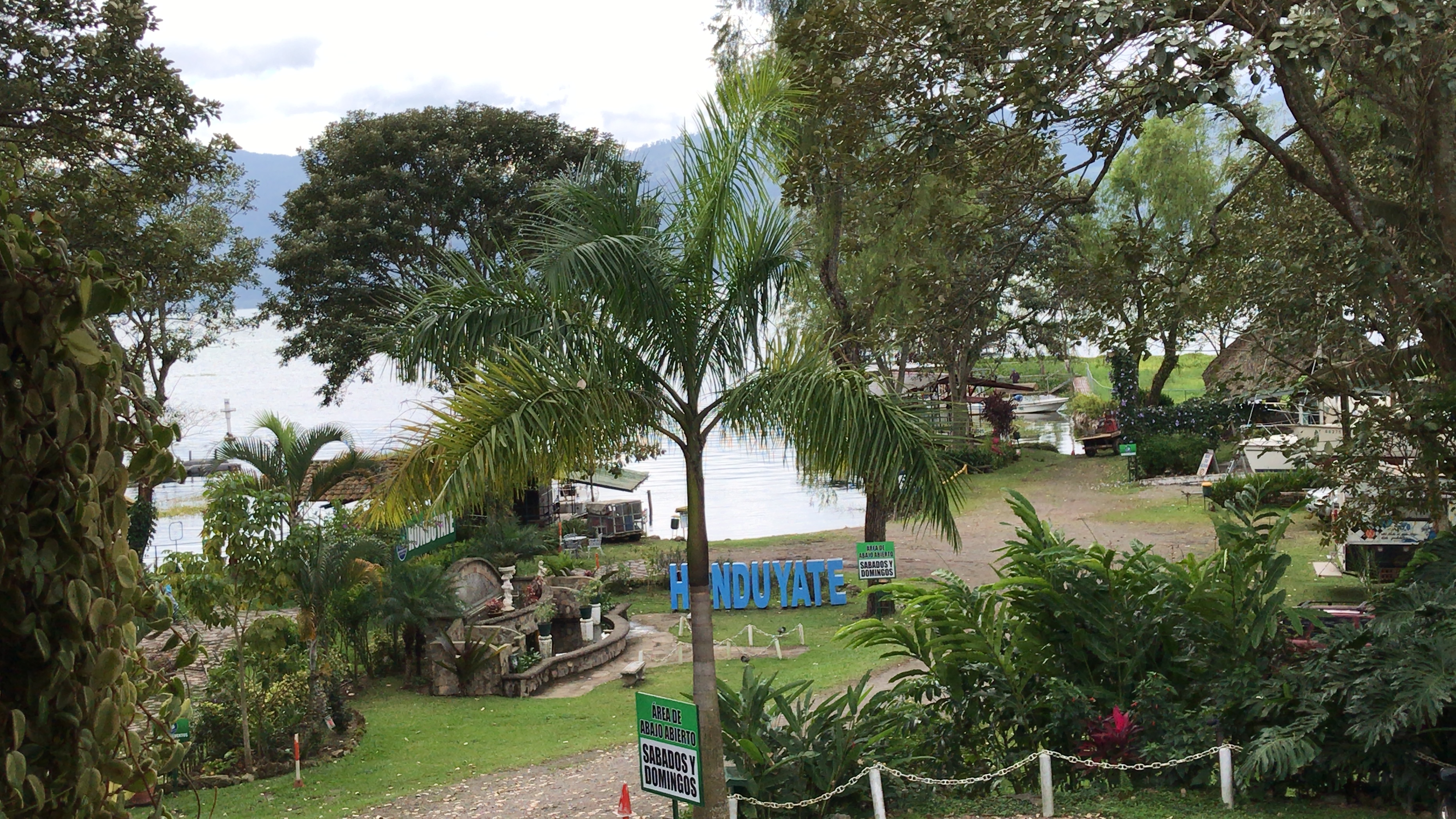 Then an overnight at a resort that included a car collection.

This odd little Volkswagen was one of the cars on display.

We spent a couple of nights at DandD Brewery which is actually a hostel and camping area.  We really enjoyed their royal treatment of overlanders. 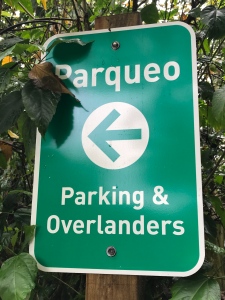 The lake was a beautiful place, but the shoreline is difficult to access due to private property.

While in this area, we also visited Pulhapanzak Falls. This is an incredibly tall and swift waterfall. The tranquil pools above the waterfall are open for swimming.   The base of the falls are used for electricity generation.

At the falls we found this lovely caterpillar.  But we had been warned that his “fur” leaves a stinging sensation in your skin if you touch it! 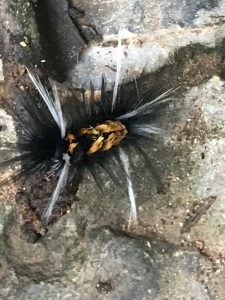 Passing by the highway near Taulbe Cave we stopped to buy some local honey and take a tour. This cave reportedly has petroglyphs inside, although we did not see them. We did see many wonderful cave structures from the well-lit trail. And when we looked up, we saw two clusters of squeaking, sleeping bats clinging to the roof of the cave.

One of our favorite campgrounds in Honduras ended up being not a campground at all. Although we spent several nights at the treed location shown below, it isn’t a traditional campsite. 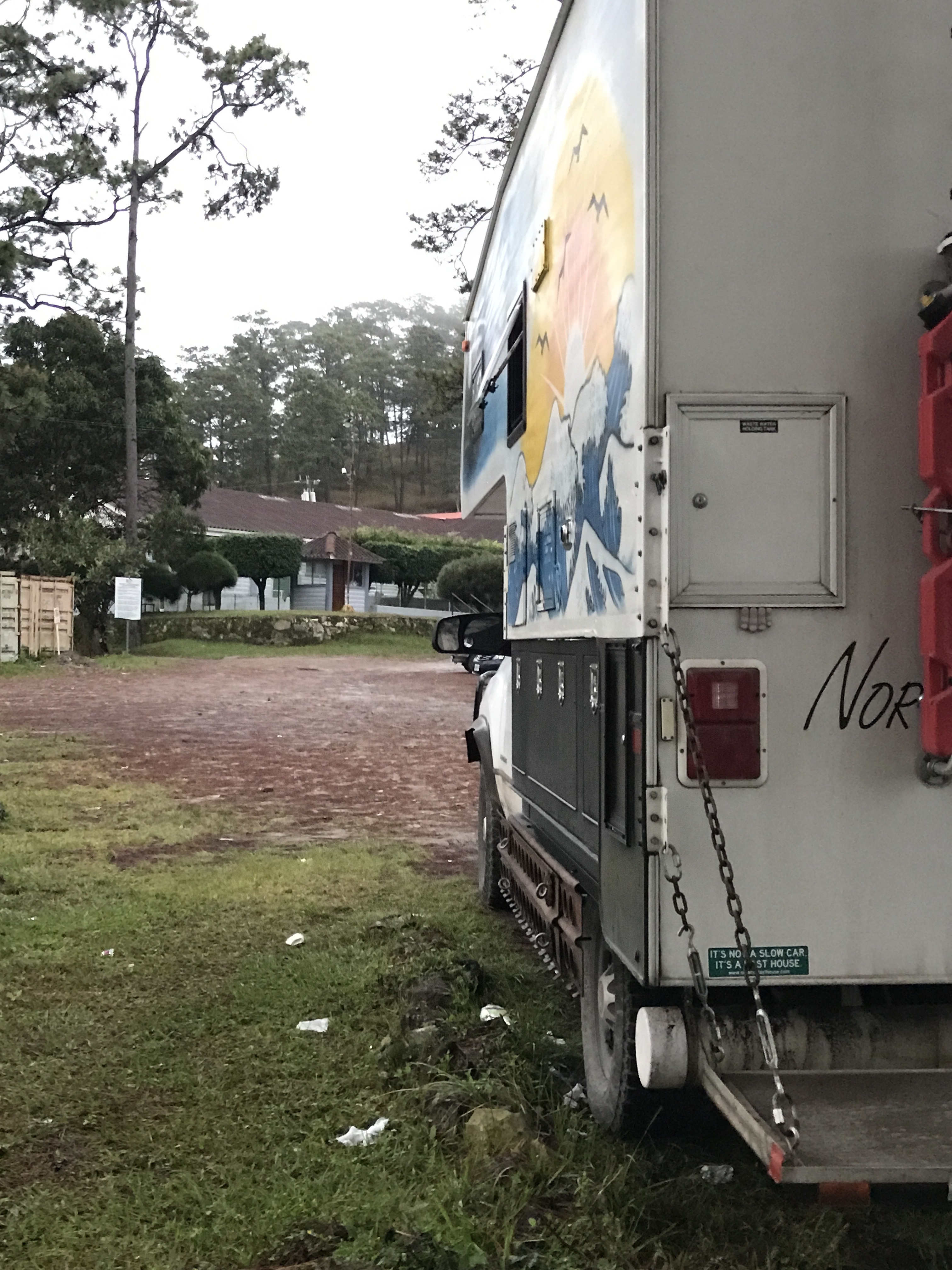 It is the lower parking lot of a private hospital. Our next post will give more details about our experience with medical care in Honduras through two different situations. Watch for it!

Passing through a small city we stopped to climb up on a famous hill with a monument to Our Lady of Immaculate Concepcion carved into a cavelike opening.  From the top of the hill we had a good viewpoint to share the vision of a typical Honduran cityscape.

One of gas station stops revealed a special surprise. The mini-mart was affiliated with Dunkin’ Donuts and carried Baskin Robbins. It was a real treat to munch on those greasy little cream-filled balls of dough while sipping coffee from a paper cup. HAHAHAHAHAHA

We spent two nights in a high-elevation, mountain camp, which was renown for birdwatchng opportunities. Panacam had cabanas, camping and a restaurant. 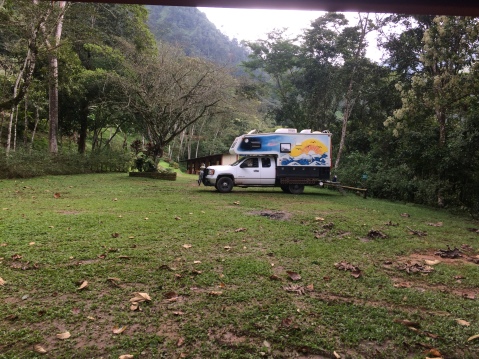 There were hikes to see waterfalls and bird observation towers in the rain forest. There was a spectacular gathering of hummingbirds near the office.  Check out this video!

Mike and Zeb explored, while Geneva hung out in the truck and did some planning work for Nicaragua.

This is what route planning looks like inside the camper.  The Nicaragua map, the Nicaragua guide book.    Yes…….. this means that our time in Honduras has drawn to a close and it is time to add another country to our collection.

Thanks for enjoying this brief tour of Honduras with us. We stayed in the country for about three weeks. We are now in Nicaragua and will fill you in on the details soon. But we have a little more to share with you about Honduras – our experiences with medical care. Up next.

One response to “Honduras – mud, fun, families and a birthday!”