After seeing Tikal we drove around the lake we were camped on.  That took us to another lakeside camp spot on the island of Flores.

This free spot was next to the local event hall and was filled with activity.  We watched the water taxis, a family decorating for a quinceanera and a diver snorkeling for fish with his wooden boat. 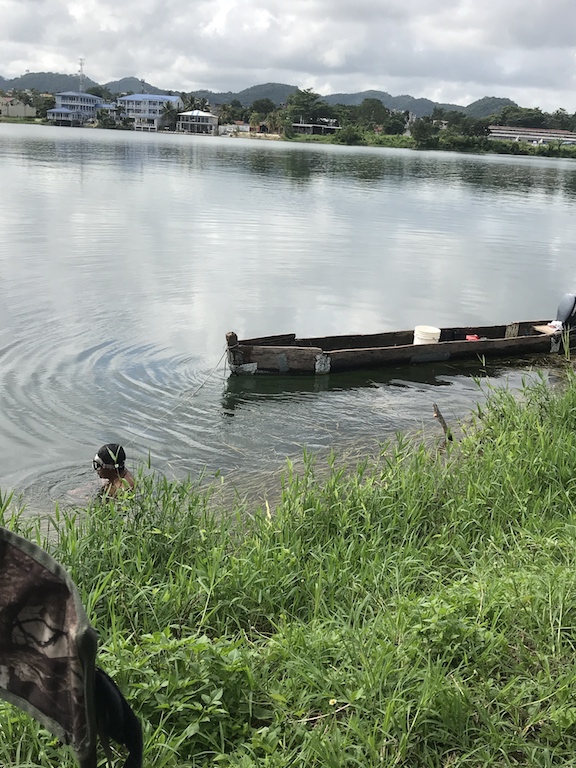 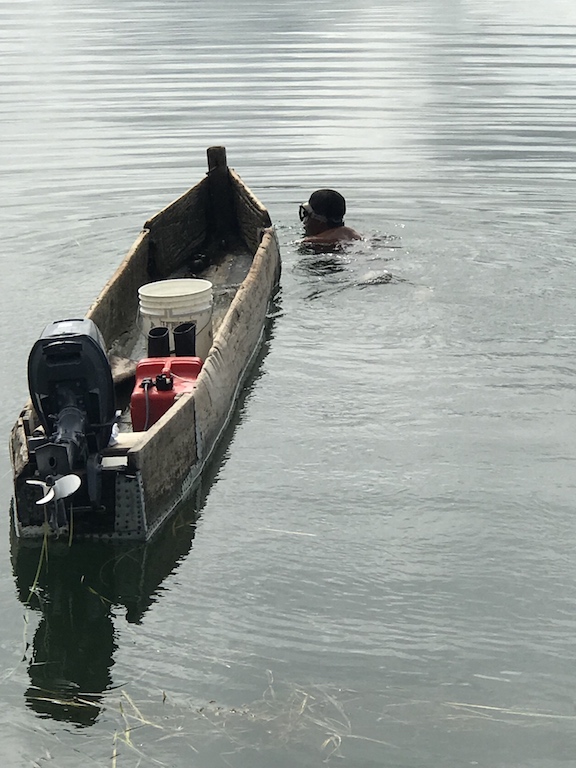 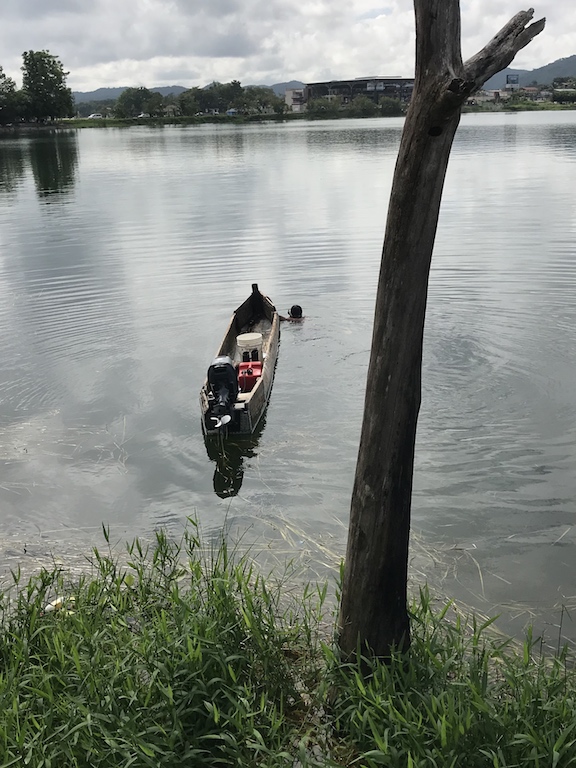 Our plan was to drive to Lake Izabal and camp in Rio Dulce.  We wanted to see the castle and the hot waterfalls.  This meant a drive from the far north of Guatemala, towards the eastern coast.  There was a lot of traffic, but it was a beautiful route.  And once we arrived in Rio Dulce we found a campsite at a huge marina.  There we learned that this area is called “hurricane hole”.  Boat insurance is more affordable if the owners store their boats in a place like this that is considered low risk during hurricane season.  For this reason the marina was very full.  Take a look at these photos and spot the little camper tucked in between hundreds and hundreds of huge boats!

While we were there we met an awesome family from England that has been traveling the world by boat for many years.  It was fun to hang out with a different style of traveler and get a glimpse into life on the water.

Castillo de San Felipe de Lara was a fun place to explore.  It is built on an isthmus and was designed to protect the water way (Lake Izabal) from raiding pirates who might venture up the river (Rio Dulce). It’s actually a fort, but looks like a beautiful castle surrounded by lush grass and sparkling water.

Our next stop along the shores of Lake Izabal was the hot waterfalls.  This took us to a campsite along side a little restaurant.  Since we were the only visitors in the area, we attracted a lot of attention from the local kids.

But it was a beautiful place to camp, so we spent two nights there enjoying the scenery and the people.  The short hike to the waterfall was fun.  We took the dogs with us as we ventured up the muddy trail.  Zeb swam for hours and enjoyed the temperate water.  Mango hopped around on the rocks and tried (unsuccessfully) to avoid getting wet.  At one point it rained so hard that we weren’t sure if we were wet from rain, or from swimming in the waterfall.

And on our way back down the muddy trail, Mango had to stop and check in with the local kids.  They were playing at one of the hot spring outlets, along the edge of the river. Mango really loves interacting with calm children whenever we encounter them and this time was no exception.  She did not even hesitate to hop along the rocks to see what these busy kids were up to.  And of course, receive a few soggy pets while she was there.

As we neared the village we encountered a couple of young boys carrying a typical burden on their heads.  All along the roadways we see these bundles of firewood being hauled by young and old, men and women.  The wood is bound tightly and then a strap is attached which rests on the forehead of the carrier.  The wood rides on their back and the weight of the burden is carried using neck and shoulder muscles.  In the photos below, look at the size of the burden compared to the size of the child carrying it.  Hard work, no matter how strong the carrier might be!

The next day was a long day of driving to Coban, Guatemala.  This included just about every type of driving condition as we passed through towns and villages, over dirt and paved roads, through sunshine and rain.  Even though we were on a major highway, as the road passes through the villages it gets narrow, busy and chaotic.  Here is a typical scene that Mike tries to navigate the truck camper through.  This photo was taken through the windshield, in the bottom right corner you see our bicycles.  But the street is busy with pedestrians, shoppers, dogs, cars, markets, low-hanging signs and the unexpected.  Never a dull moment!

Arriving in Coban near dark meant that we were hungry.  Once we were settled into a gated, public parking area for a campsite.  We went out to seek street food for dinner.  The Coban street food scene did not let us down.  We enjoyed a few local specialties and some seasonal delights.  We discovered a delicious, warm drink called “ponche” which is a heated blend of fruit juices, spices and diced fruit.  Yummy!

The next few days we had our laundry done, bought groceries and walked around the streets of Coban.  This busy city is bustling with markets and activities.

In this photo we see Mike (green shirt) helping an elderly Mayan woman who had fallen.  He took her arm and walked her down the hill and across the street.  Such chivalry! This photo also appeared on our Instagram feed and Facebook page. Are you following us there?

We left Coban on a sunny morning and went to a coffee finca (farm) which is managed by a cooperative group of families.  Approximately 30 families live and work on this site, producing a massive amount of coffee that is harvested, roasted and distributed from this location.  When we arrived the adults were in a meeting, so the children were bored.  They quickly gravitated toward us and began petting the dogs.

After the greetings were done, we took the dogs and headed out to walk the farm with our female guide.  Here she is showing us the bosque (forest) which is an area that the finca has restored to natural forest.  Most of the trees were decimated in the early development of Guatemala when the trees were over-harvested for wood to be shipped to Europe.  Reforestation and crop management are relatively new concepts in this country, yet so important for soil stabilization and health.

After the coffee tour we went to Orquigonia to park for the night.  This is an orchid reserve that is dedicated to preserving the rare and threatened orchids of this region of Central America.  The family has been working this project for over 75 years and has gathered and protected thousands of varieties of orchids.  We spent the night on the beautiful grounds, and took a tour in the morning to learn more about orchid preservation.

The next night was a bit unplanned.  We wanted to see a city that was known for excellent handcrafts and a unique temple.  When we arrived we saw just a bustling business district, and the temple turned out to be a few columns with a roof.  Since it was late, we didn’t have time to seek a camping option.  We decided to camp there on the street.  We asked a woman in a nearby doorway if it was safe and she replied that we should park in front of her place.  So we pulled to the side, in front of her metal fence and made “camp” for the night.  We were on a hill and in a noisy city, but it would do just fine.

Can you spot the camper in the center of the photo.  You can see the hill, the temple and the exhausted dog!  It was a tough climb back to the camper after exploring the city.  When we returned, the street vendors were setting up their food stands for the night.  We ate delicious street food and made sure to spend a little bit of money at each location.  The neighborhood knew we were sleeping in our casa rodante, and they knew we had a perro bravo in there with us.  We never felt unsafe in this location.  Thanks for an unexpectedly fun night, Salama’.

If this Guatemalan hospitality and fun continues, we may stay for the full term of our permit….. heck we may even extend our permit!  We are really enjoying the comfortable climates, friendly people, interesting food and beautiful views.

I will leave you with this stop light.  It has a countdown timer which tells you when the light will change.

These appear in several of the major cities we have visited thus far. It helps pedestrians know how long they have to cross, and it seems to reduce the irritating honking of impatient drivers that was so common in Mexico. And perhaps it helps prevent accidents by indicating when the yellow light is going to turn red.   How would you feel about sitting at a light if you knew exactly when it was going to change?  And would you run a yellow light if you knew exactly which second it was going to turn red?

4 responses to “Guatemala- A few campsites…..”