One of our highlights in Merida, Yucatan, Mexico was the opportunity to witness a fully costumed performance of the traditional Mayan ball game.  Each of the ruins we have toured featured a large, elaborate ball court.  But there was little or no explanation of the game itself.

We arrived early to have a great position near the players and the court.  In the center is a replica of the carved stone ring which the ball must pass through.  This target is about 8 feet up. 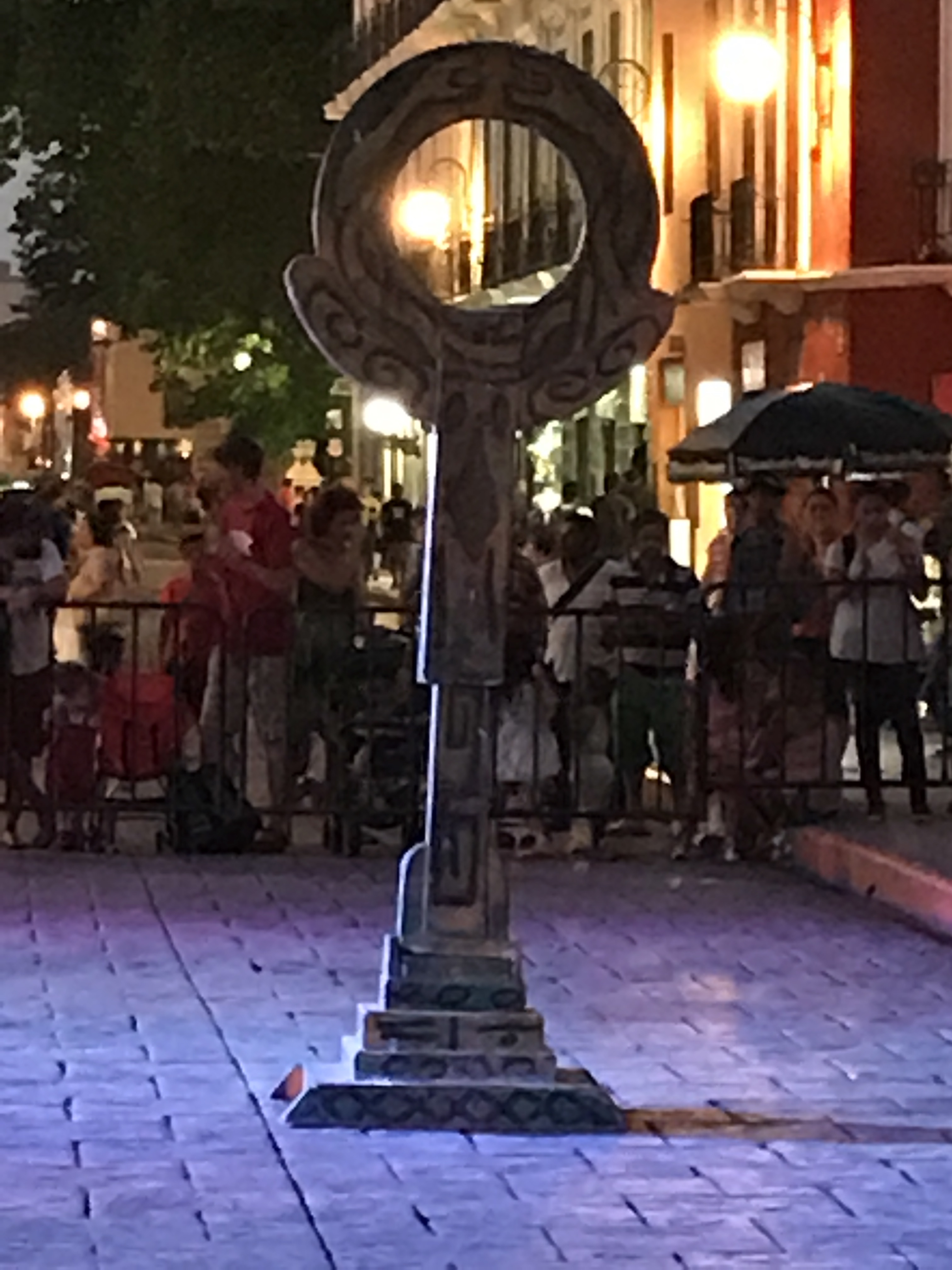 The announcer was speaking only Spanish, so we did our best to make sense of the show.  The first portion was the ceremonial blessing of the ball court and offerings to the gods.  This was done with incense, fire and chanting.

When the game began, the players first bounced the small, hard, rubber ball.  Then threw it towards the other team.  To return the ball, the team had to hit the ball using their hips.  I had imagined this was something like hacky-sack, but it is not!  Instead of standing up, the players throw themselves sideways onto the ground to send the ball back with a slight bounce.

In this action shot you can see the man preparing to throw his hip on the ground.  The round, dark grey ball is just in front of him (near his calf) in this photo. 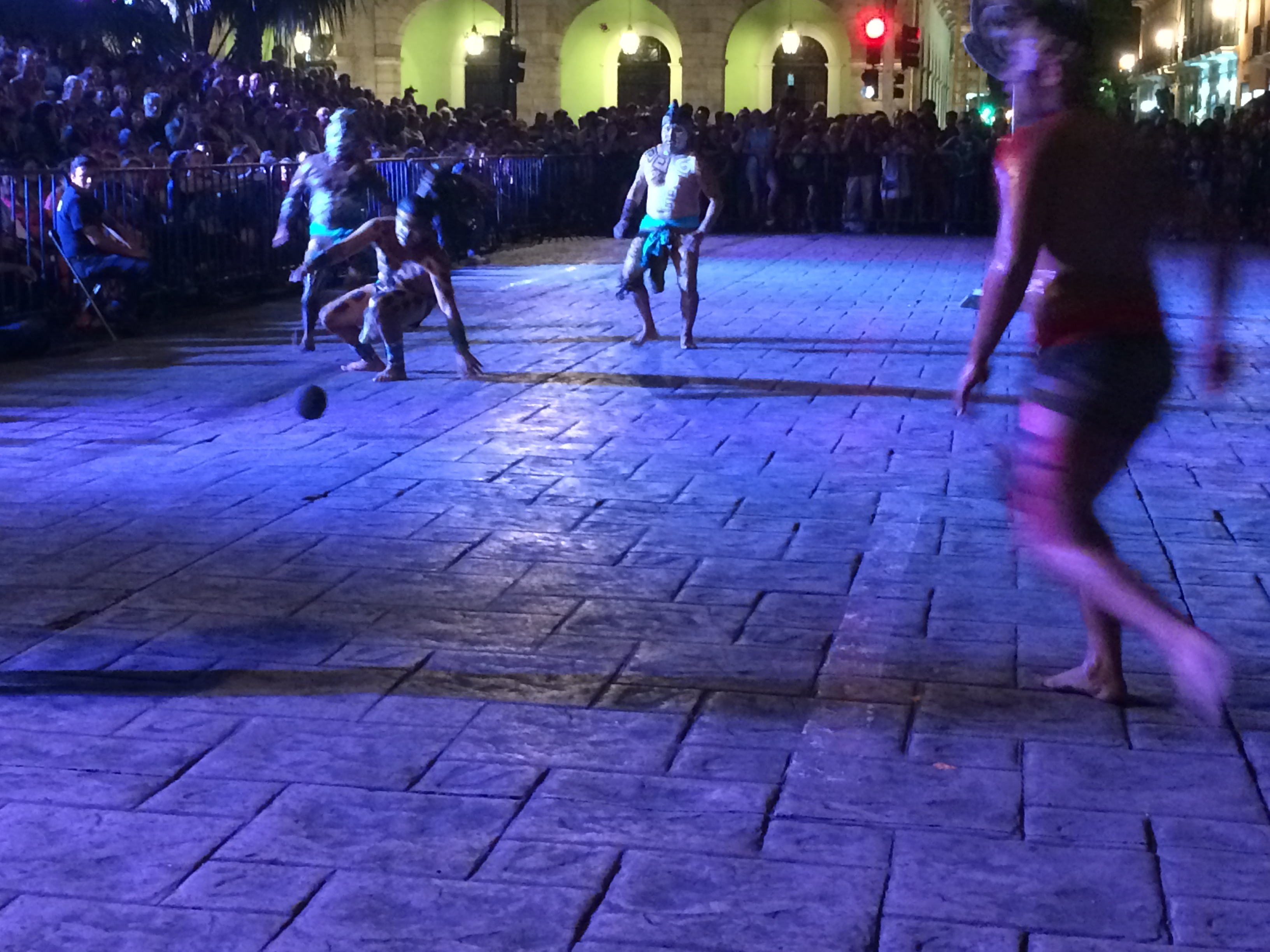 This man is lowering himself down to bounce the ball off his hip at ground level. 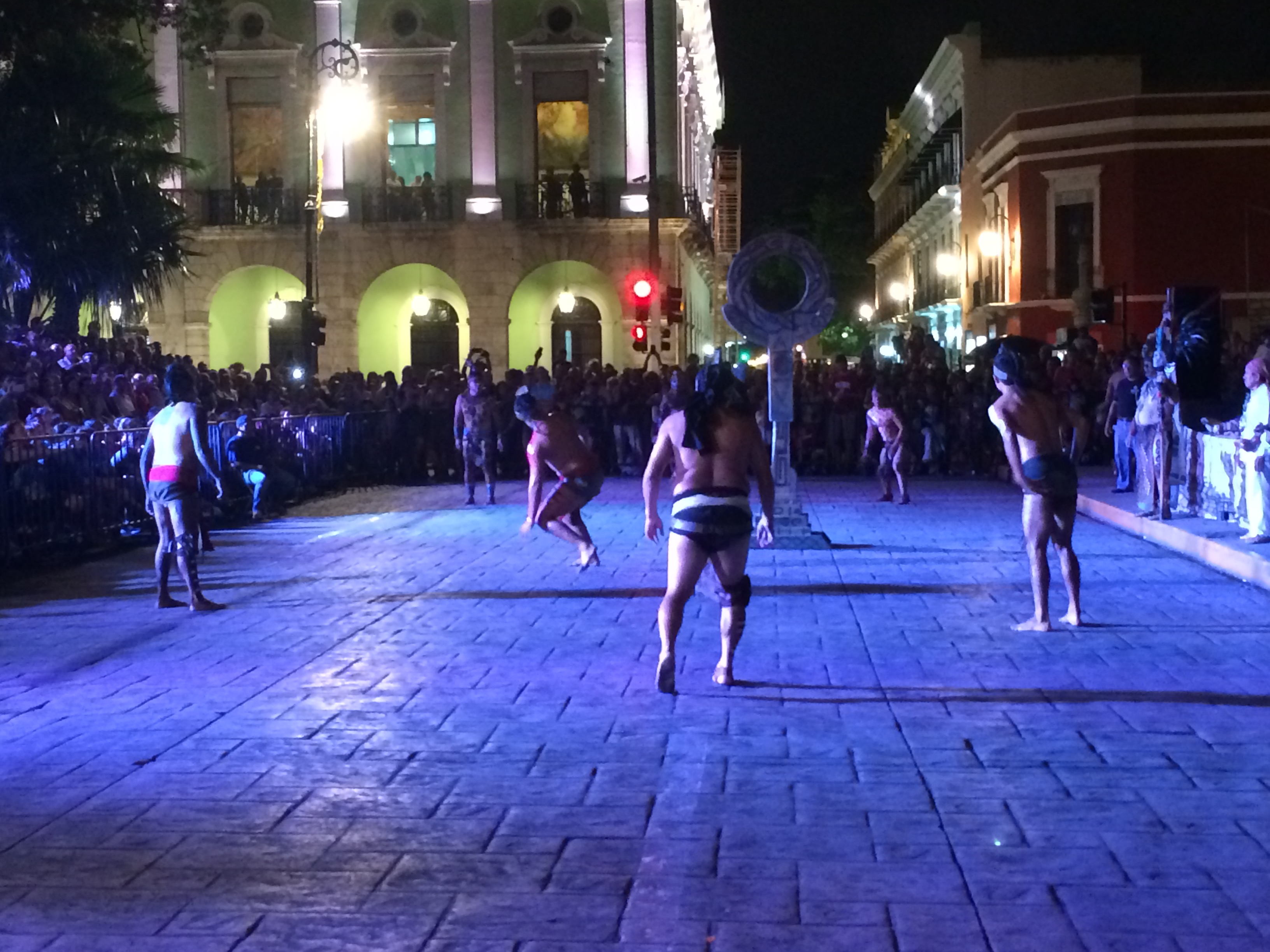 In this photo the player second from left is preparing to hit the ground and bounce the ball off his hip.  The ball is behind his body in this image.

The object is to get the ball bouncing high enough that you can hit it with a hip or shoulder and send it through the stone ring target.  This actually happened several times during the demonstration that we watched.  Of course, we caught none of those!

After the rubber ball version of the game was over, they used a different ball for a very different game.  This time the ball was flammable and saturated in fuel.  They lit it on fire and the players used their hands to move the ball of flames back and forth across the playing area.  When the shot was right, they hit the ball through the stone ring target.

At the conclusion of this game, the flaming ball was placed on the ground and a ceremonial closing dance was held.  We assume, from our tours and museums, that there would have been a human sacrifice in Mayan times.  Some sources said that the winning team was sacrificed to the gods.  Not much incentive to win in my opinion!  But alas, there were no humans sacrificed this night.  We enjoyed watching and learning about Pok ta Pok on the streets of Merida.

Tomorrow we head to the other side of the peninsula, Quintana Roo, Mexico.  This is the area known as the Mayan Riviera and home to Cancun, Cozumel and more.  We are nearing the Belize border, time to do the paperwork.