While we were visiting San Cristobal de las Casas we took our first trip with a tour guide!  We paid for a van ride and boat tour of Sumidero Canyon.  The van picked us up in town and drove us about 2 hours to the boat launch area. 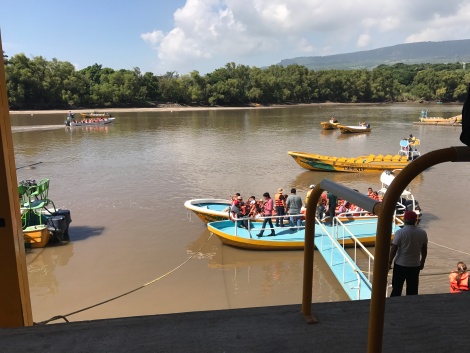 We boarded a boat with our puffy lifejacket and 38 new friends and headed upriver. The canyon was gorgeous.  The walls are steep and the trees were green and lush. 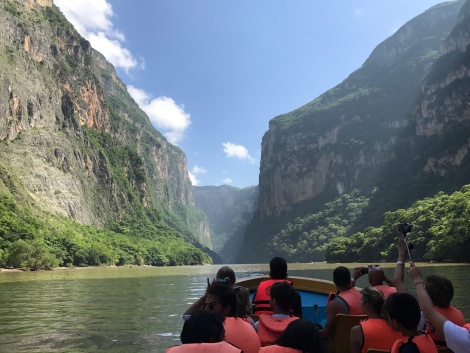 One highlight of the trip was the “Christmas Tree” which is made of rock.  The waterfall runs out of a natural spring just a few months of the year in the rainy season.  During the wet months the new deposits of minerals form and ferns, algae and plants grow on the tree-shaped formation.  This beauty is clinging to the side of the canyon and stretches upwards over 800 feet!

The beauty of Sumidero Canyon

During the trip we also saw monkeys and learned about the trash clean up efforts along this important waterway.  It was a great day to be on the river and we really enjoyed the tour.  After the tour they dropped us for a lunch stop in a small town.  We watched the marimba guys play on the sidewalks of the central plaza as we ate our tacos!

After the tour to Sumidero Canyon we were ready to venture onto the highway to Palenque.  This would take us down a section of the Pan-American Highway that is known for being rough.  That label is earned due to the road condition and also the locals.  So with some trepidation, we departed.

About halfway to Palenque we started getting phone calls from the youngest son.  He was using the VW van in Colorado and having electrical issues.  Surprise, surprise! Alta was acting like a true VW; demanding attention and causing trouble.  We quickly decided to change our plans so we could stay within cell service range and coach him through.  The logical detour was a visit to the Tonina archeological ruins.  And although we were frustrated with the long-distance van issues, we were thrilled with our stop at Tonina.

Tonina has a unique layout to it.  Rather than moving all the stelae, carvings, idols and thrones to the ground level or placing them in a museum; Tonina left everything in place.  This means that the visitors are encouraged to climb up the face of the pyramid and explore the various structures attached to it. 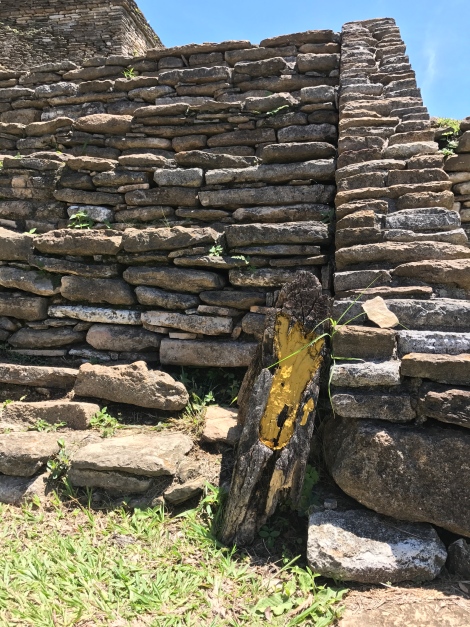 That is a footprint with an arrow next to it.  It is indicating that you are supposed to climb up the pyramid.

No, this photo is not upside down. It is a carved depiction of a warrior holding his prize – the head of a leader from an opposing village! Many of the stellae at Tonina illustrate their violent nature.

Inscriptions are protected from further decay with thatched roofs, but they remain in their original chambers and areas.  Many walls have fallen, and most ceilings are gone. But the sheer size of this ancient village is impressive and the ability to walk through it is even more so!

The experience of walking around the various levels of the pyramid was enjoyable, even in the mid-day heat and the tunnels were a cool relief.  We agreed that Tonina was our favorite Mayan ruins thus far.  We camped at a small, family operated camping area just outside the gate.  The birds were amazing and the views of the peaceful valley were gorgeous.  We used this time to talk through the VW van electrical issues back in the USA and enjoy an unplanned stop.

Bird nests that dangle from branches and blow in the afternoon breeze.

The next day we resumed our trek towards Palenque.  The route took us through a town named Ocosingo.  This region is notorious for blockades, and today would be no exception.  We noticed lines at the gas station as we passed through town around noon and thought it was odd.  And then as we neared the edge of town, traffic stopped moving.  We edged forward and were quickly wedged in by taxis, delivery trucks and buses.  The Pan-American Highway had been blockaded and we were stuck.  We were about 10 cars from the front line, and no one was going anywhere.  So we jumped the truck over the curb and pulled up in front of a small auto parts store.  With the owners permission, and a purchase of new wiper blades; we set up our campsite.  It was about 1:00pm and we were ready for whatever the day had in store for us. 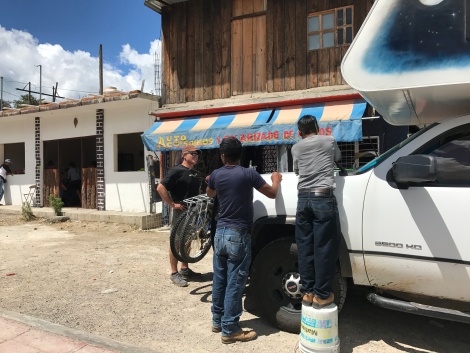 Two guys from the parts store are installing new wiper blades while Mike watches in a supervisory role!

It was clear that this would go on for a while, although we had no idea how long.  People began to exit their various vehicles and gather outside.  Restaurants were quickly filled and tables were added, ice-cream vendors showed up, ringing their bells and pushing their carts.  The beer stores were selling cold beer as fast as they could stock it.  This was a street party in the works! 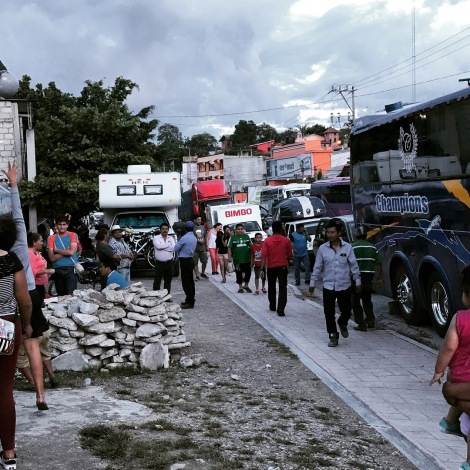 The rear deck of our camper hosted many people while we were parked there.  It is the perfect height for a seat!  Below is a photo with a lot going on!  Three ladies are eating corn on the cob on the back deck of our truck while some traditionally dressed indigenous villagers carry their loads towards the front line of the road block. An enterprising local vendor sells fresh tamales out of a laundry basket and a young man heads towards the beer store for a cerveza.

Later the back deck became a seat for a tiny woman of Mayan descent.  She popped down in her traditional garb and pulled out a sewing project.  When she finished I purchased a cute little hand embroidered blouse from here for 80pesos (about $5.00usd) And meanwhile, the four of us are beginning to feel a bit bored while we hang out in the camper.   We played a game, surfed the internet, took naps, ate a late lunch, walked the dogs and watched the crowd swirl around us.  The day moved on slowly. 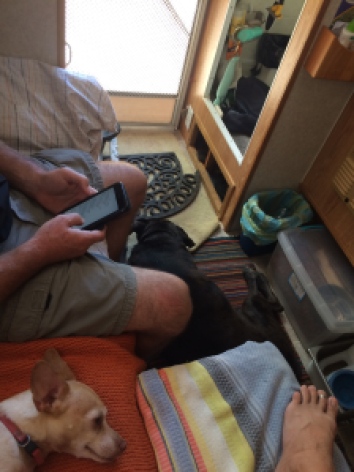 But I will use this short video to point out the calmness of the entire event.  Please note that hundreds, maybe thousands of people are now inconvenienced by this roadblock.  Yet everyone is peaceful.  No violence, no shouting, no threats.  Just working through whatever their own situation is and waiting for the road to open.

Meanwhile up on the front line, I took a few photos of what was going on.  There is a line of rocks across the road.  A city bus has been parked across the highway and a banner is draped over both sides.  A small group of leaders seem to be talking about the issues.  Notice that there are no suits, no ties, no official looking government types and NO POLICE.  A local told us that the police will not become involved because it is a civil matter, not a legal matter.  Interesting use of the words “civil” and “legal”, right?

As time passed a larger crowd gathered at the front line.  Loudspeakers were wired up to a cafe at the front line and speeches began around dark. The blockade had been going on for about 7 hours by this time. Folks were still calm and peaceful.  Some were drunk, some were sleeping but no one was outwardly upset or agitated. 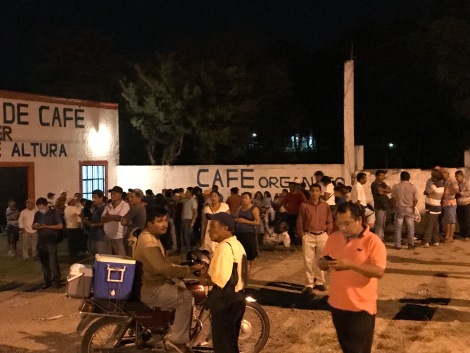 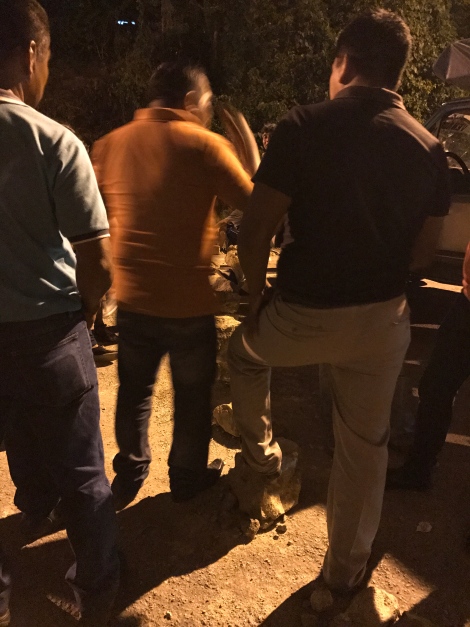 Around 10:00pm things quieted down around us.  People were sleeping in cars and in buses, on sidewalks and in the back of trucks.  We had our house with us, so we turned on our fans and settled in for the night.  The blockade that had started at 1:00pm finally opened up about 1:30am.  We awoke to the sound of honking horns and a few cheers as engines roared to life and traffic resumed.  We did not even get out of bed.   The next morning the traffic was flowing normally and the town was waking up as if nothing had happened.  We made coffee, ate our granola and then resumed our travels down the Pan-American Highway.

We don’t know if they accomplished their purpose or if their concerns were even acknowledged.  We did hear that another blockade occurred about a week later.  And currently the area is considered “risky” because the striking teachers are prone to violence.  I hope these posts have helped illustrate that Chiapas is a beautiful state, and one that is prone to varying degrees of inconvenience and civil unrest.  Keep watching to see what else we find as we drive along the Pan-American Highway.

4 responses to “San Cristobal to Palenque – Roadblock! You can’t pass by here today!”