Outside of Mexico City lies a sleeping giant.  Volcán Popocatapetl lies waiting to cause destruction again.  Popo slept for centuries, but awoke in 1994 and has spewed ash, rocks and steam every few years since then.  Next to Popo lies Volcán Iztaccihuatl which is considered to be dormant.  Both peaks are capped with snow and ice, even in the summer! 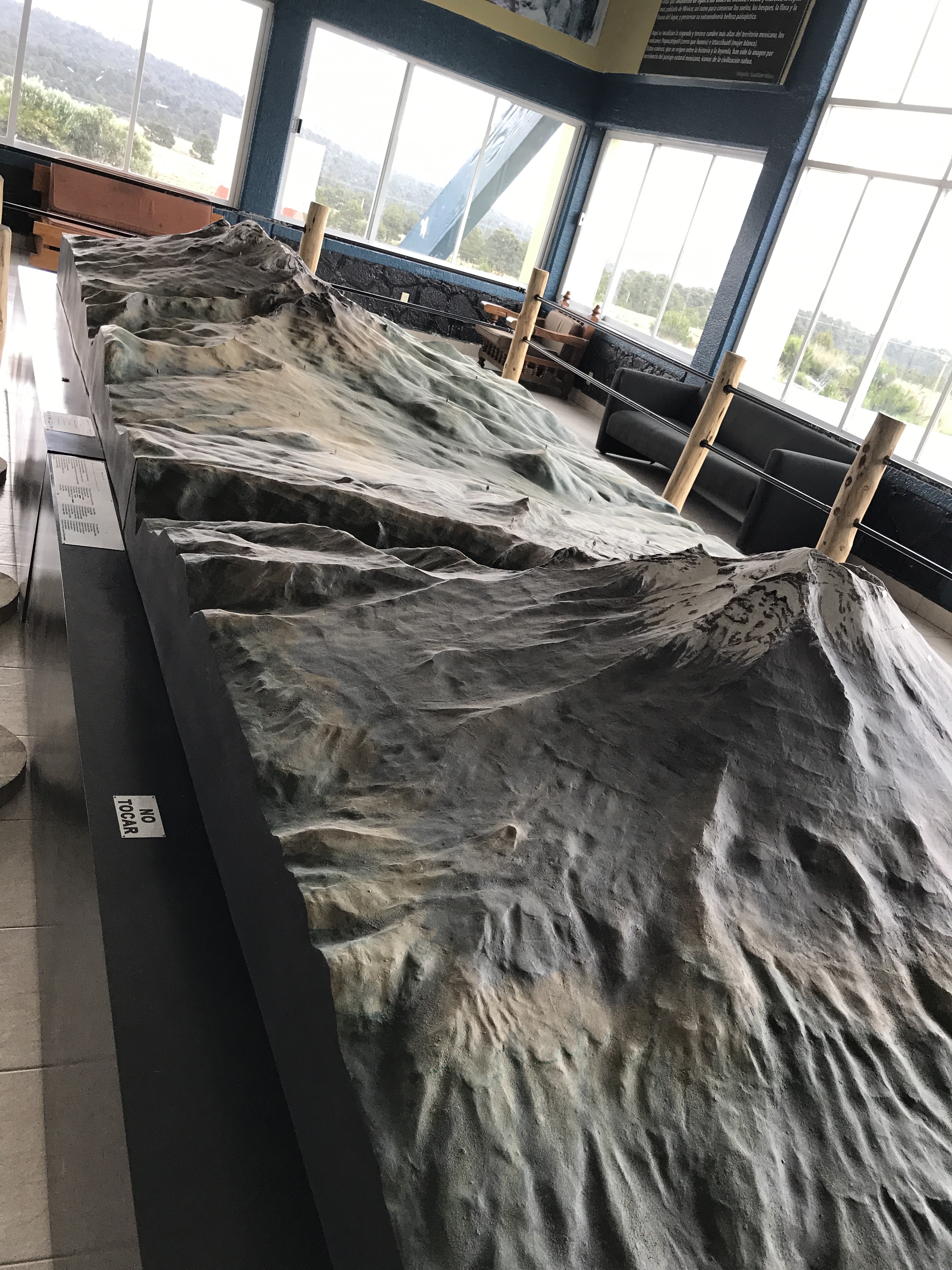 We decided that we would drive up to the area called La Joya.  This is a camping zone at the base of Itza that are typically used by hikers.  The mountain is frequently hiked by visitors from Mexico City.  The camping area is covered in volcanic dust and is windy and cold.  I guess that is what you can expect at 13,000 feet elevation.

From the campsite there are trails leading to the valley, and trails leading up the mountain.  Mike and the dogs did some exploring upon arrival.  The next day Mike decided he would head up the mountain for a few hours.   The photo with the orange circle is provided to set the perspective.  The circle is around Mike as he is about 100 yards from camp.  The size of the mountain is so immense, it immediately swallowed the hiker headed up the trail.  Below that photo are a variety of photos that he took during his hike on Iztaccihuatl.

He also caught some great photos of Popo, shrouded in clouds, off in the distance.

And on the way back down the trail he met a small, cold snake!  Yep, even at these elevations there are snakes! Luckily the snake was too cold to care about Mike being there, because I am pretty sure it was a Mexican Pygmy Rattlesnake.

When he returned to camp we both decided to move to a different campsite.  We were tired of the wind and blowing volcanic sand, and the elevation was taking its toll with mild headaches.  We stopped at the toilet stall on the way out of the campsite.  This may be the funniest bathroom we have seen!  When sitting on the toilet, the eyes of the dog are staring right into your eyes!

The new campsite was about a mile away but quite a bit lower elevation.  The dogs had an easier time running around and we both noticed the difference too!  We were also behind a small hill, so the wind was not so intense.  And Popo was looming in the distance, just behind the hill! 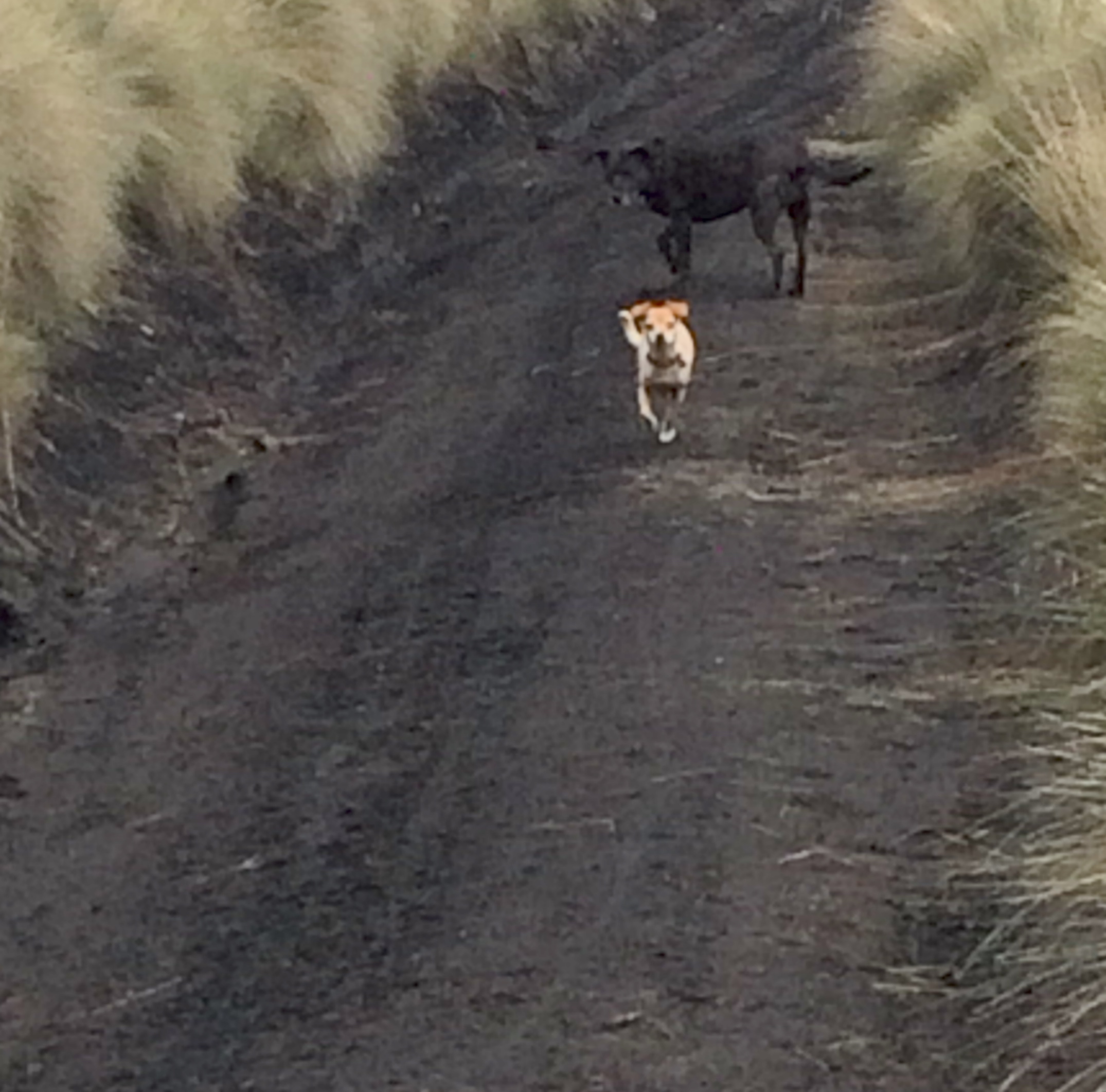 At this lower elevation the grass grew taller and spiky little flowers fought for a chance.

Sunset was very dramatic that night.  The fiery ball of sun slashed through the layers of clouds as it worked towards the low valley in the horizon.

This second campsite had no shortage of dramatic beauty.  This photo shows Itza in the background with a twilight evening sky and clouds bringing rain to the top of the mountain.  You can also see the snow that hides up there year-round.

And when we climbed to the top of our little protective hill we captured one photo of Popocatapetl puffing away off in the distance.   The clouds at the base are just regular clouds.  But the clouds at the top are steam coming out of the volcano cone!  The structure in the lower right corner is a HUGE tower. It likely contains equipment for monitoring volcanic activity.  But the size of that tower is dwarfed by the size of the volcano!

When we left this Nacional Parque we headed towards Puebla.  But not before we pulled over and repaired the stuff that had rattled loose on the dirt road! Here is Mike asking if I am really taking a photo of this!  Notice the tool boxes are open, the tools are out and the mat is on the ground.  He is replacing the strap that holds the tube that holds the outdoor rug! It is the large, round, white tube under the rear of the camper.  After everything was back in place, we drove off the mountain. 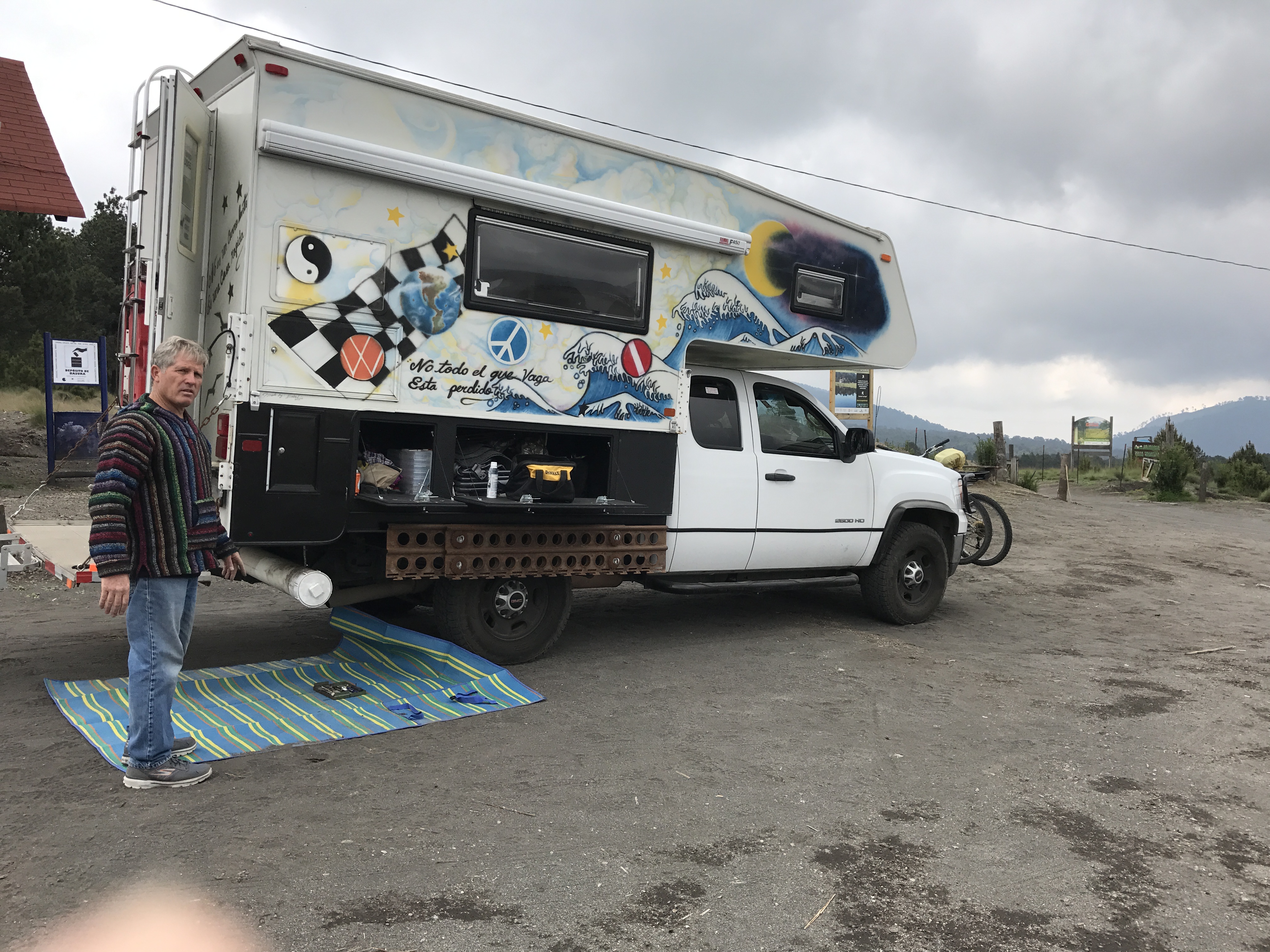 We had selected a camping area called Buena Vista because we wanted to see the ermita.  When we arrived, they guided us to park near this funny sign.  We each came up with the theory that paintball is called “Gotcha” here.  We were parked near the paintball field. 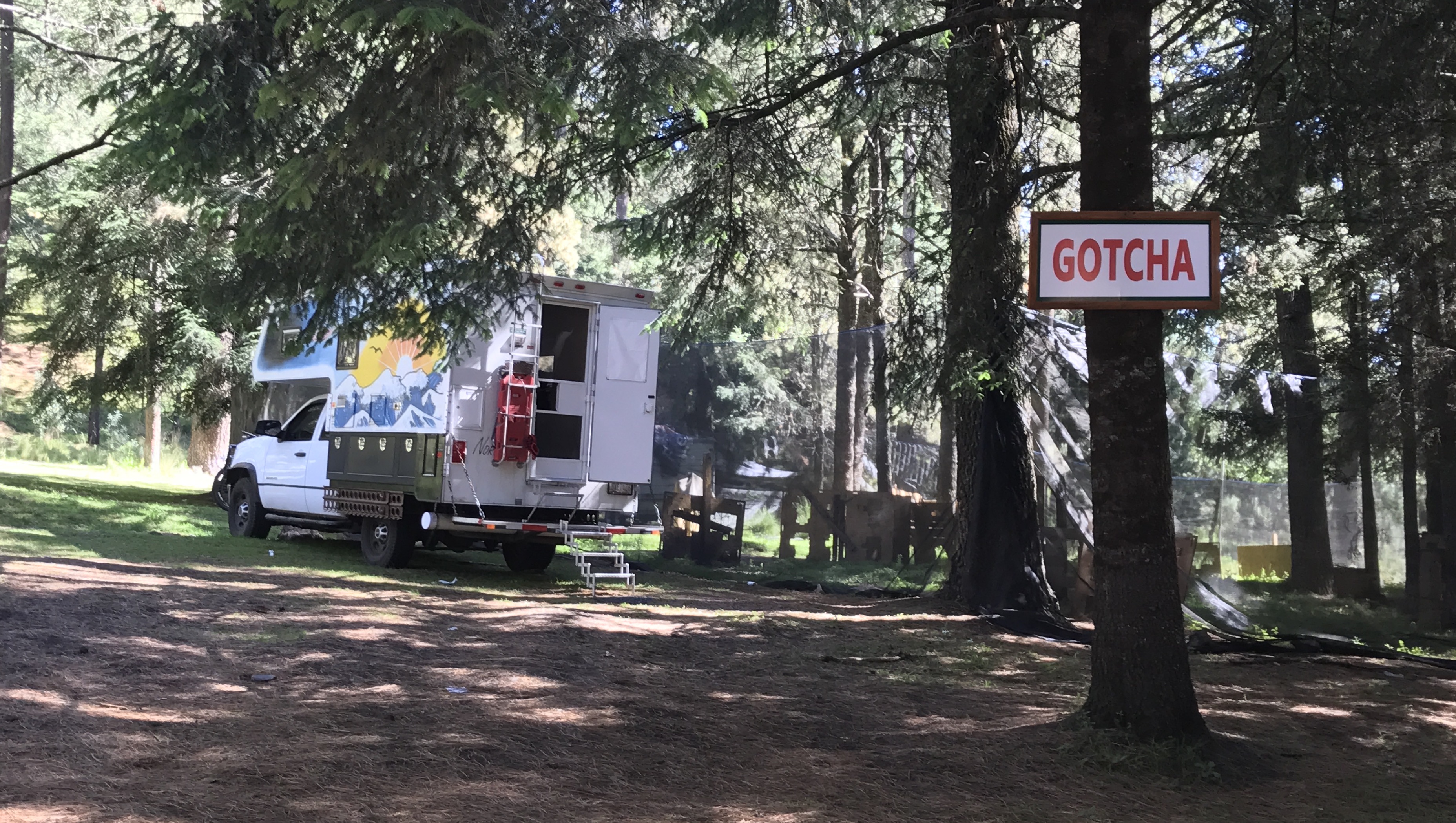 From camp we took the long walk to the ermita.  In English this would be a hermitage.  This one is called Ermita del Silence and at the door to the chapel visitors are asked to be silent.  The walk to this location was long, strenuous and hot.  But it was worth every moment once we saw the unique beauty of the structure.  These photos really do not capture the peaceful yet striking tranquility of this place. We approached from below first, as we secured a place to hook up the tired dogs.  We started by filming the view of the valley below and Popo off in the distance. 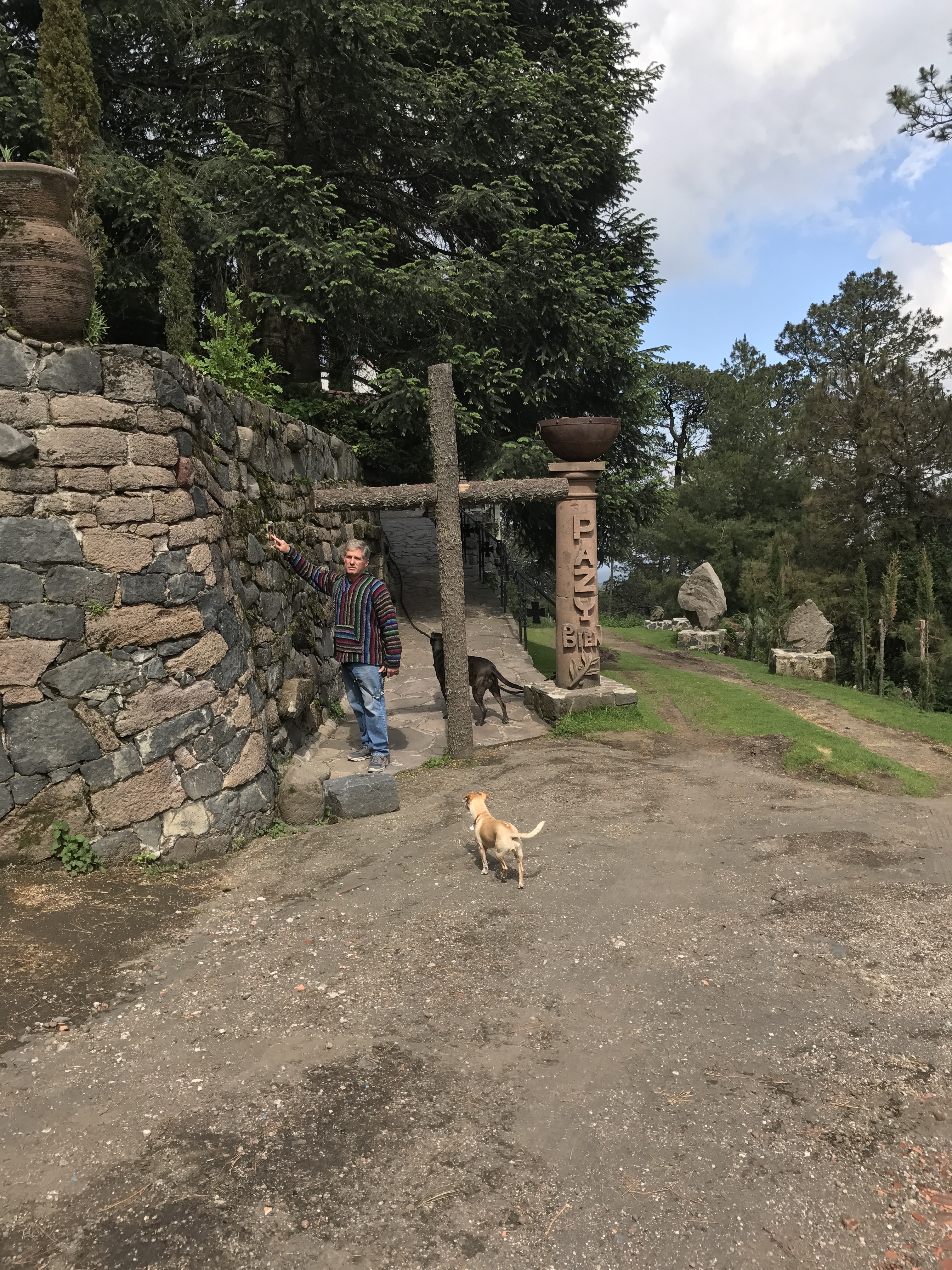 Then we went to the entrance gate.  At this point guests are reminded that if a silent retreat is taking place, they must remain silent.  When we visited we only encountered some very talkative groundskeepers- so silence was not golden! 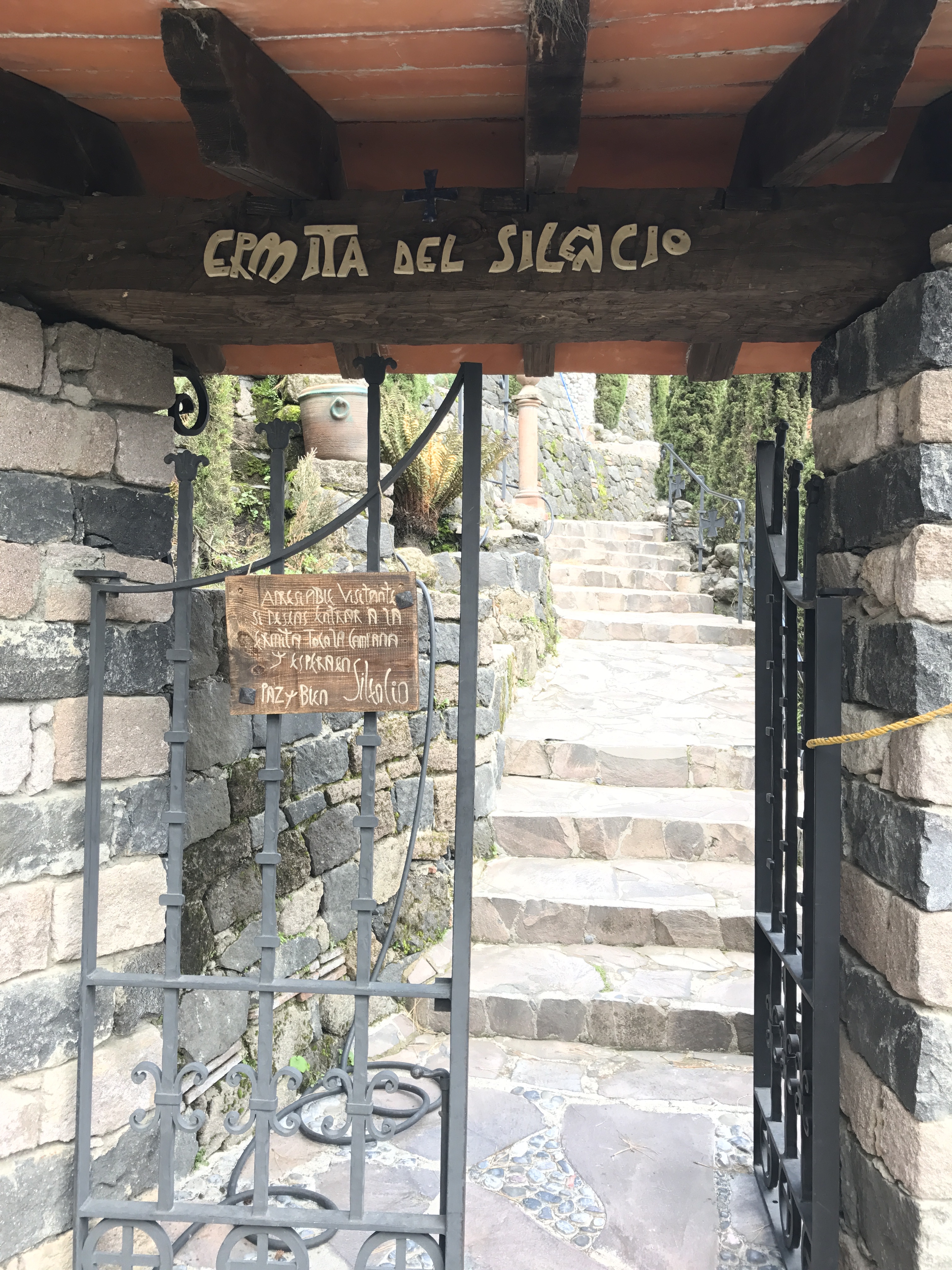 The entire structure is built onto a rock face which has a graceful waterfall flowing down from several levels.  The waterfall lends a beautiful backdrop of sound to the entire place. 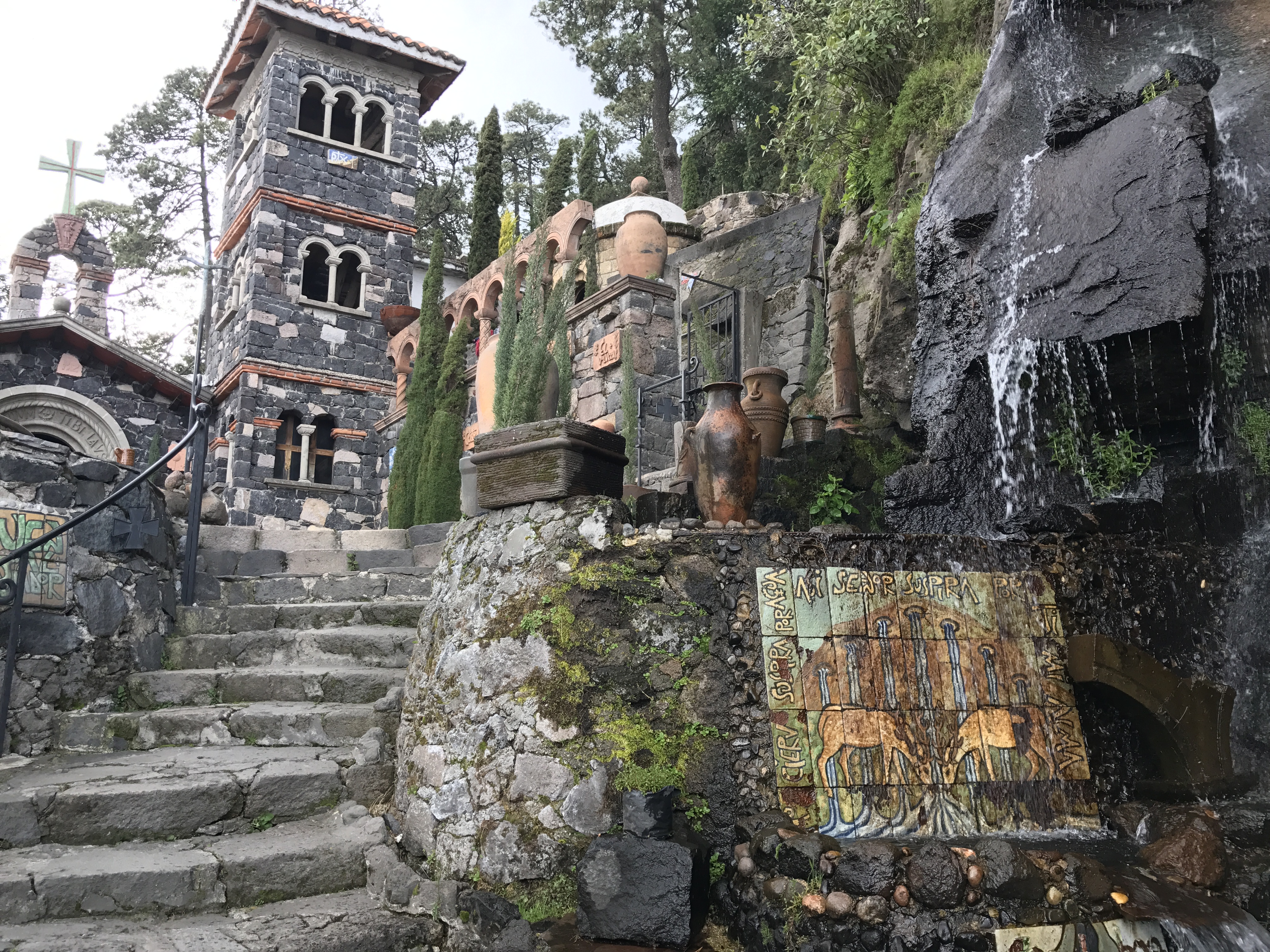 The grounds are not the only striking aspect of this place.  The chapel is incredible.  I apologize for the darkness of the photos, but there are no lights inside.  Actually there are no lights anywhere.  The entire place is “off the grid”, so the only lighting comes from candles, which were not lit when we visited.  The chapel is a small room with a low ceiling.  There are no seats.  The windows overlook Popo and the valley below.  The walls, floors, ceiling and decorations are a variety of handworked ceramics and wood. 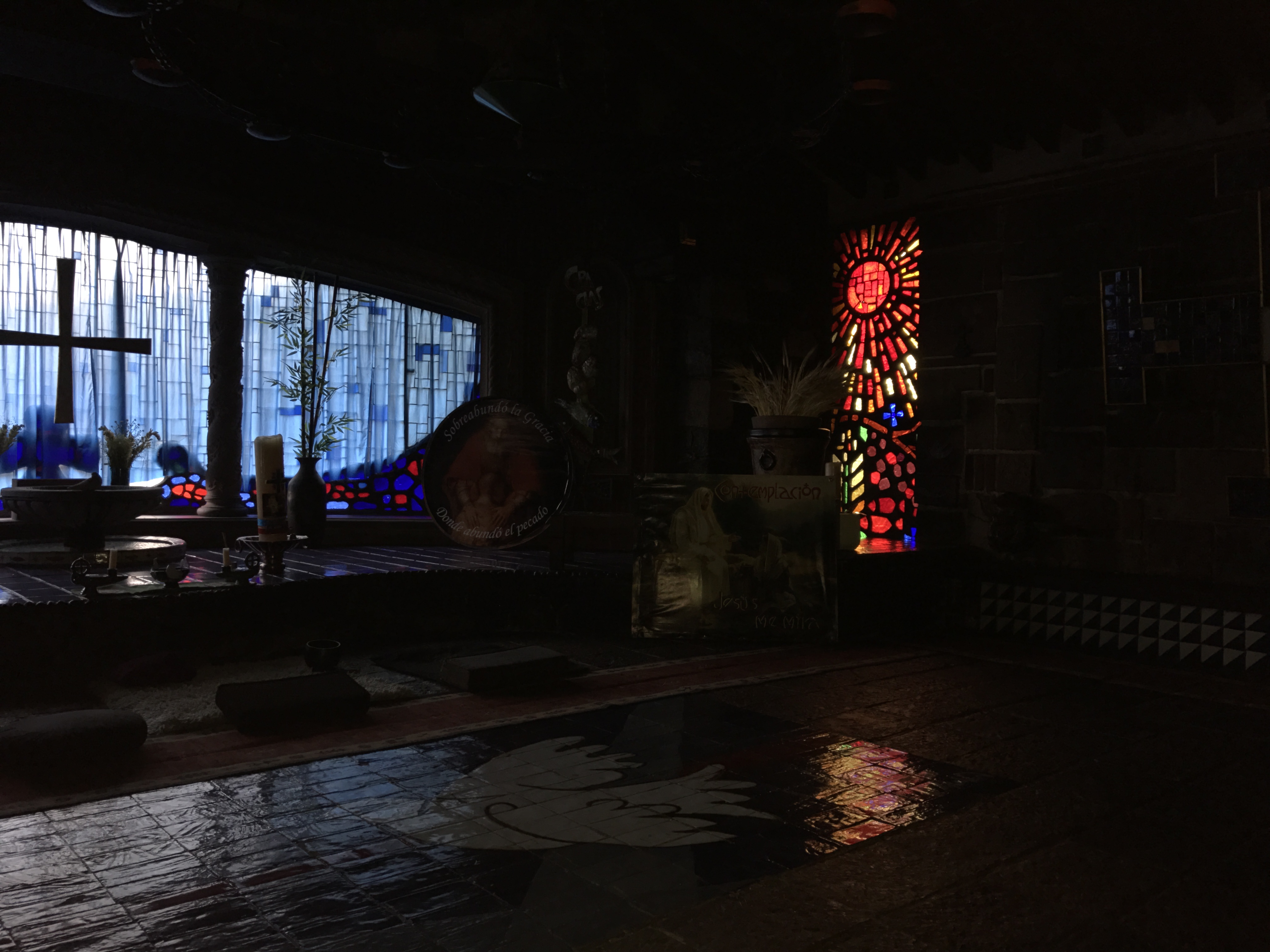 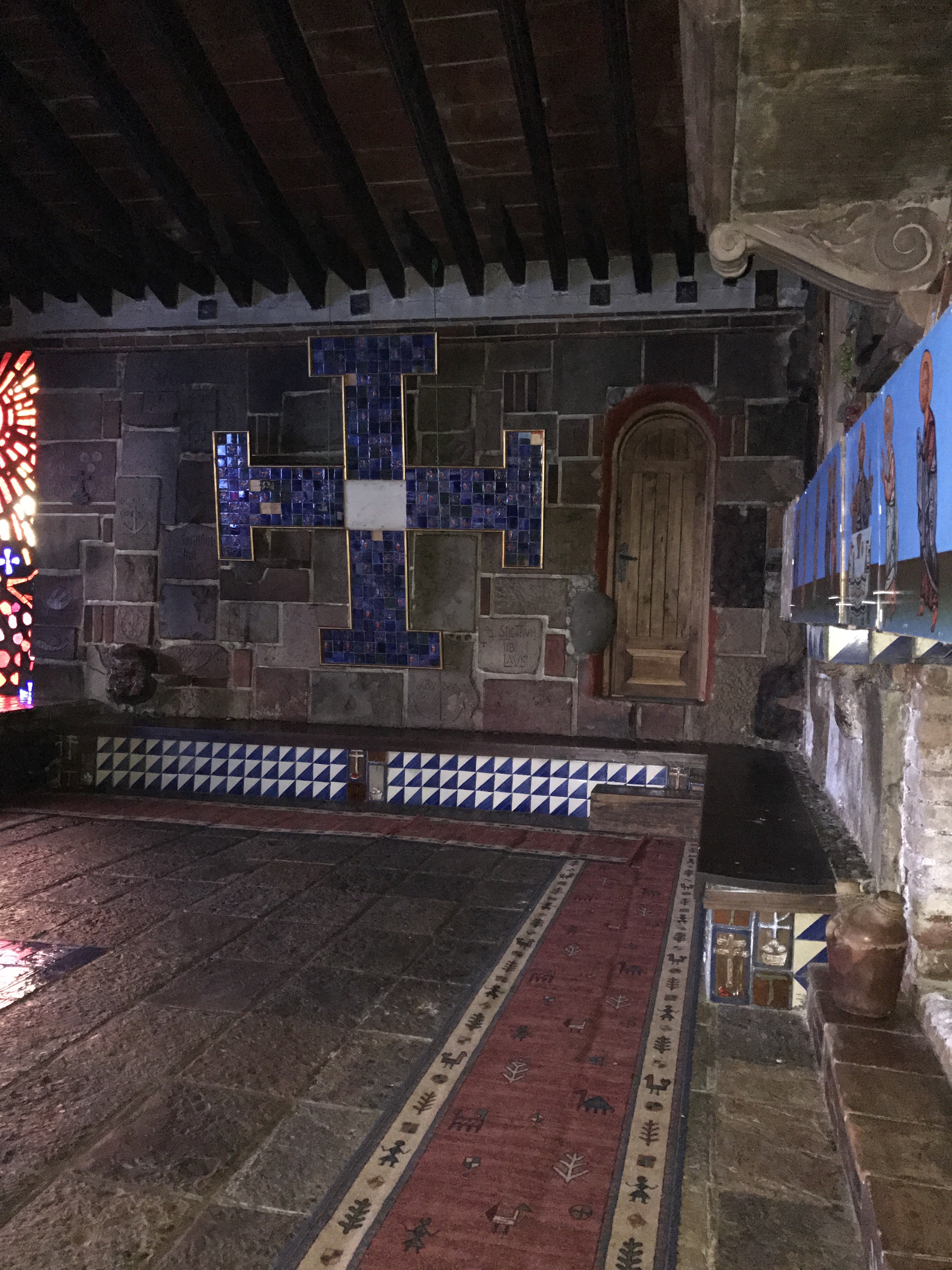 Leaving this special place was difficult.  We both felt compelled to just sit and enjoy it a little longer.  But a storm was gathering above us, and the four of us had a long walk ahead.  We returned to our “Gotcha” campsite and headed to the restaurant for dinner.  One special feature of the place we camped was a stocked trout pond.  This meant that dinner was fresh, grilled trout with garlic butter.  YUMMY!  Our visit ended with a delicious and quiet fireside dinner in the rustic restaurant of the camping area.  Complete with a cozy cat curled up near the fire.  So many representations of peace had crossed our paths on this day. 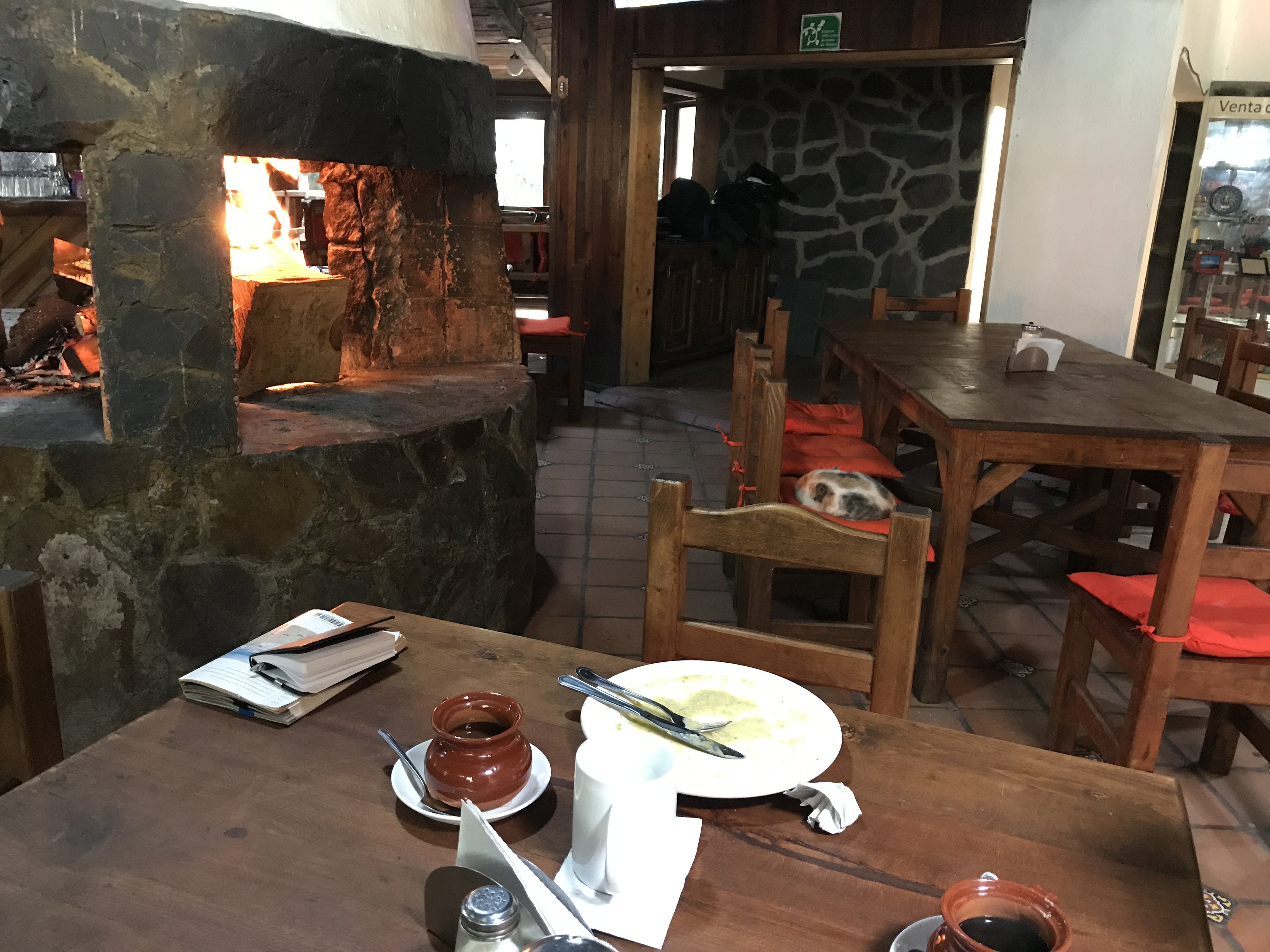 The next morning we continued our drive down the mountain towards Cholula and Puebla.  We were going back to the hustle and bustle of a large, Mexican city.