As we left Durango we felt the burgeoning city melt away.  We were headed about 7 kilometers away to an archeological dig site known as La Ferriera.  This is located next to a small, dusty village with dirt streets.  We pulled in to the village and let the dogs run on the wide open space of ball fields and mesquite trees along a concrete canal.

We then drove the short distance to La Ferriera. We arrived just as they were locking the entrance gate. We asked permission to park overnight in the parking lot and were told it was fine and would be safe and quiet.  It was. 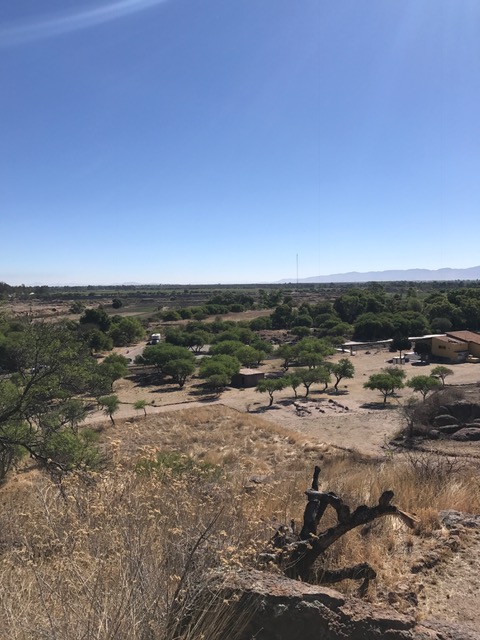 This photo shows the terrain and fauna of the area.  On the right is the entrance building for the site.  Nestled in the trees on the left side of the photo you can see our camper in the parking lot.  The mesquite and tamarisk trees in this region are watered by the Tunal River (merely a stream by US standards) which also feeds many dusty agricultural fields in this area.

The next morning we put on our walking shoes and wandered around sections of the 15 acre archeological site.  There are many structures which have been excavated enough to show defined walls, steps, altars and more.  There is a ball court, once used for a game for which the rules are merely postulates.  At the top of this hill is a three level rock structure, which was once topped with a brushy roof.  This pyramid-shaped building is thought to have been a house of worship for the region.  Many of the structures were destroyed by the Spanish Catholics who came to the area to convert the natives.  Historical notes indicate that after a brief investigation of the area in the 60’s it has been extensively looted.  Much has been lost over the past 40 years.  What remains are stacked rock, shaped rock and carved rock which show the basic shape of what was there during the times it was occupied. (Believed to be between 875 and 1450)

This photo shows how the large, immovable boulders were carved and shaped to be incorporated into the steps, patios and walls of the structures.  In the background is the city of Durango, Mexico. 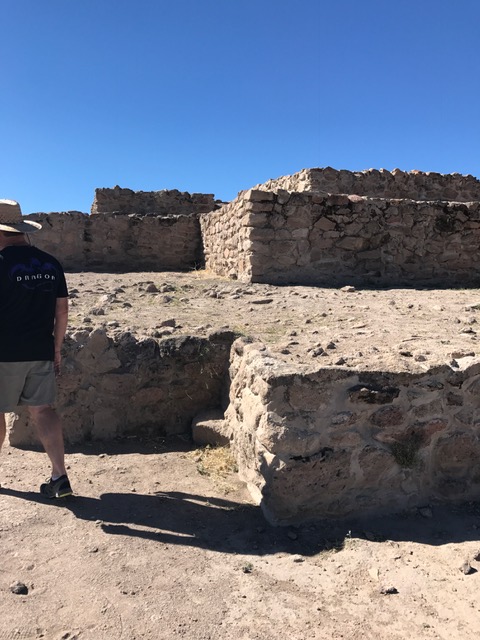 The three levels of the pyramid are shown here. Each levels is shaped and stacked to be about 4 feet tall.

Unfortunately many of these fantastic columns were pillaged.

Looking down onto one of the main housing areas of La Ferriera. Walls are clearly visible, but little else remains.

This location is interesting, albeit poorly interpreted.  The pathway arrows are confusing and missing in many places.  The building has very little written information and many missing items in the meager display cases.  Along the dusty paths I found literally hundreds of pottery shards.  They are washing out of the structures and down the furrowed paths during each rainstorm.  We ventured off the path briefly into the weeds and trees of the adjoining hillside.  There were many more structures there, and some cavelike openings with square-shaped, rock entrances.  One of the caves has been sealed with a metal grate.  Surely there is much more that could be learned from this extensive site.  But I am sure that funding and resources are not directed toward the preservation of such a place.  I am glad we stopped by for a visit, but it left me with more questions than answers about the people and history of this area.  Even internet searches did not reveal much about La Ferriera.   This may be just one of many disappearing links to the MesoAmerican cultures.

Next stop- The beautiful, colonial city of Zacatecas.