The Alaska Highway has an interesting historical tale.

A few tidbits include: 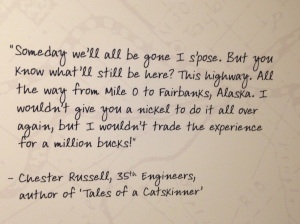 We learned most of this in a museum in Dawson Creek. They had old photos, artifacts, a full size display of a jeep and much information about the construction of the highway.  There we also found a very clever geocache hide. Can you see the geocache?

Maybe this photo helps you see it better.

It is in the ammo can on the passenger floor of the jeep in the museum display!

After the requisite photo at Mile 0

(Mango is NOT smiling for the camera in this one)   We drove across the longest wooden bridge in Canada and spent our first night in a municipal campground. Many cities operate a small campground in their city park area. This one had a cute, restored train car as the shower house. 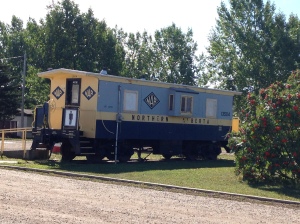 We shared our dinner that night with a man from Seattle that is traveling to Fairbanks on a Triumph motorcycle.  It was interesting to hear his story.

The next morning we discovered our first Alaska Highway damage. One cracked headlight lens and one small dent in the drivers door. 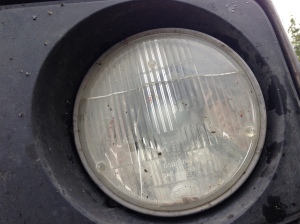 If this is the worst of it, we can take it. Off we go towards Alaska!

One response to “Mile 0 – The Alaska Highway”

The new post is up!! Check out the latest news at www.slowcarfasthouse.com Why is Pacha in a tree? Why is Mike in the motor? What is Nica whining about? Why did the SIL fly to Brazil? Find the answers to all but one of these questions in the latest story. Did you read it yet? Answers below ⬇️