This country is rich with indigenous heritage.  The various cultures (tribes) are respected and honored with positions in the government and opportunities to improve their communities.  Many traditions and practices continue to be a part of their daily lives.  Raising, cooking and eating cuy is one of those traditions.  Cuy (in the USA we call it guinea pig) is as common on the daily menu as chicken or beef.  (As of this writing, we have not tried it)

Another common food source is borrego (sheep) and they are raised in nearly all settings from villages to mountains.  These sheep are grazing the weeds along a city sidewalk. While others graze the sides of the highway, even in a pouring rain storm! 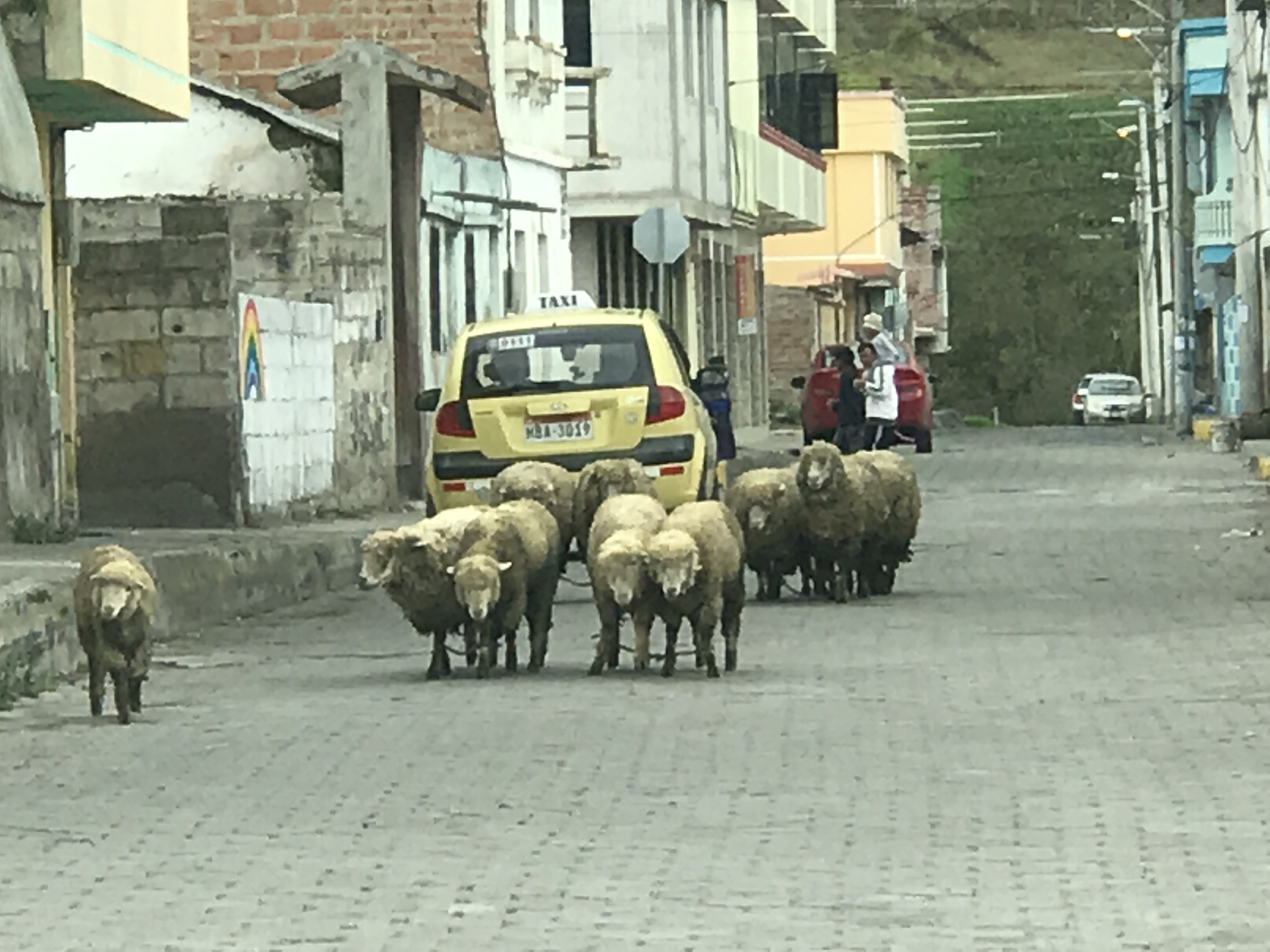 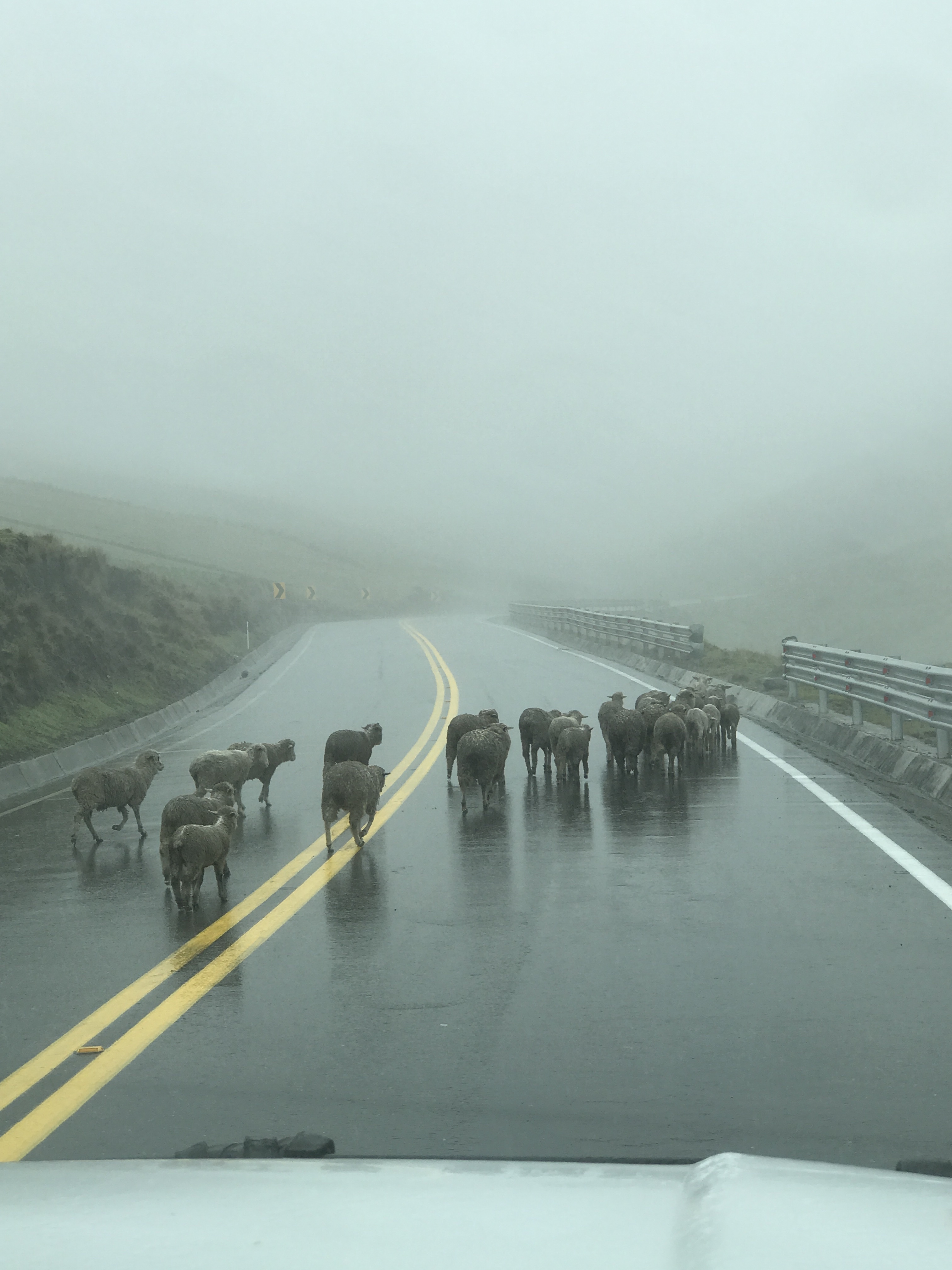 But sheep are not the only thing we must watch for when driving along the PanAmerican Highway.  The rain produces many washouts, rock slides, mud slides and even completely collapsed roads.

One thing to keep in mind is that the villages we pass through are living their daily lives.  So we encounter the typical processes of daily life as we pass through the various towns and villages.  On this drizzly day we pulled over to allow a funeral procession to pass by.

One afternoon we stopped to see a very, very old church.  It was locked, but instead we spent time watching the dismissal of school for the day.  In the photos and video below we see school children who are going about their afternoon activities.  They are purchasing snacks, making plans, flirting with each other and loading up the informal school bus that will transport them to their homes in the surrounding hills and valleys.

We had another cute exchange with children in a small village where we camped for the night.  We parked near a small river and curious children came to look at us.

When we went to town to have lunch, we took Nica with us.  The children of the restaurant worker were fascinated by the leash.  Initially they wanted to play with it while attached to her, but we unhooked it to watch them play.  The leash vanished with the kids, and returned 20 minutes later with giggles ands smiles.

On the way back to our campsite we found a cage full of crabs.  Nica thought this was fascinating.  She stopped to watch CRAB-TV for several minutes.

We did find an old church a few days later.  This church is reported as the first church in Ecuador.  It has tumbled down due to earthquakes, and been rebuilt.  If you look closely at the front of the church

you will see that the designs and patterns don’t quite fit together.  This is due to the rebuilding processes after the damage in 1534.  They were in such a hurry to repair the building, that they did not take the time to look closely at the patterns in the stones.  Additionally, there were no photographic records for them to follow, so they were rebuilding from memory.

The inside of the church is also unique, as it was built on the site of a small, religious pyramid.  The altar area at the front of the church is a pyramid shape.  Then it is adorned with Catholic idols.  This is another example of how the Spanish conquerors tried to integrate indigenous practices with Catholicism in order to convert the natives.  We have seen this done in many ways, but this is the first pyramid inside a church.

And speaking of the natives…… we visited one of the relatively few archeological sites in Ecuador.  This area is known as Tulipanes.  It is comprised of a series of tubs or baths that were used ritually for the tribes living in this region.  They had an elaborate system of canals, bringing spring water into the baths, and then discharging the water into the nearby river.  Apparently they did not bathe in the river.  Much of this is speculation, as there is little record of the groups in this area.

And we saw this beautiful spider, hiding in the top of a cut piece of bamboo.

One of our final stops in this region was a surprise encounter with a winery.  Growing grapes and producing wine is a rather new industry for Ecuador.  We took a wrong turn and ended up turning at a vineyard.  They invited us to view the cava and sample the wine.  While there we met a German man who is writing a magazine article about this place. They are really hoping to break into the world wine market with their product.  We did our part to help, by purchasing several bottles to take to Arizona.  Of course, we forgot to pack them when we left, so we will drink them ourselves!  HAHAHAHA.

The views of the vineyards were a stark contrast to the view in the distance of the volcanos.  What a beautiful place to relax and enjoy a glass of wine.  I hope the business takes off for them.

From there we found a nice, grassy lakefront to camp on for the night.  This provided us with more beautiful views, and a spot for Nica to take a nap.

Adios for now.  Thanks for being with us in Ecuador.  There is more to come!

One response to “Ecuador- Daily life and history combined.”