After our first days of hot springs, volcanoes and hikes we were ready to explore more of El Salvador.  We passed through some touristy village such as Ataco and Alegria during our explorations.  We stopped in an adorable little town named Berlin and had coffee. The shop was inspiring, including this staircase.

We found the little village of Juayua, which hosts a street food market each weekend.  We spent two nights parked on a quiet side street of this village.  While there we got laundry and grocery shopping done, and enjoyed some great street food! The town has a beautiful and elaborate church as the centerpiece.   Below is a little video of the truck as it creaks and rattles along the cobblestone streets of Juayua, El Salvador.

One of our favorite campsites in El Salvador was high up in the rocky mountains of the Northern region known as Morazan.  The campsite is called Camping Arizona.  Apparently the owner visited Arizona for a few years and thought this region of El Salvador looked quite similar.  We agree, do you?

In that mountain region we visited a village named Perquin and began to learn a great deal about the civil war history in El Salvador.  In a separate post we will discuss the military history of El Salvador and some of the museums we explored.   Sign up to “follow” and watch for the next post.

We took a long, winding back road to a seldom visited archeological site called Grotto de Espiritu Santo.  This cave contains petroglyphs that are confirmed to be from 600 to 900 AD.  Here is a link to a website with more information if you are interested.  Caution, this will open in a new window. More about Grotto de Espiritu Santo

Just because we haven’t featured him in a while, I will insert a photo of Zeb enjoying our beautiful new couch cushion-covers.  We bought the fabric and had them sewn in Guatemala.  We love the addition of the bright colors to the inside of our house.  And Zeb likes them too!

Another of our favorite campsites was creekside near Cinquera.  The forest has been well-preserved and the creek is still clean and fresh.  We enjoyed the birds, the bubbling water and the rustling leaves for several days.  Mike and Zeb also enjoyed hiking the trails.

We also visited the nearby city of Suchitoto.  This town is one of Prescott’s Sister Cities and also a destination for some of the students from the high school I opened and operated (Here is a link to my former charter high school- this will open in a new window)  They visit Suchitoto each May as a part of their Intensives courses.  We were able to meet their host, Sister Peggy and spend a couple of nights camped there.  Zeb enjoyed meeting the dog that lives there.

Somewhere around that part of El Salvador we celebrated the New Year. Our celebration on New Years morning included the special treats pictured here.

In keeping with our pattern of visiting the big city in each country, we “camped” in  the capital city of San Salvador for a few days. Our campsite was in front of a popular hostel.

While there we found big grocery stores that carried our favorite French Vanilla Creamer and a store in the mall that was named just for Mike.  The mall even offered special parking for certain customers. 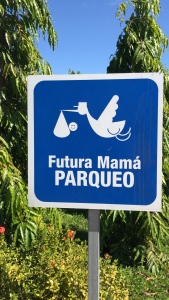 We visited a swanky salon for some grooming and the salon required us to change into these satiny robes during our services. 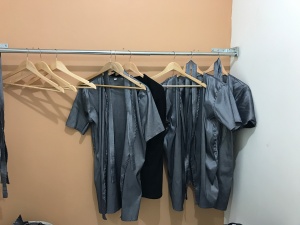 We also visited the El Salvador Mapa de Relieve or Relief Map.  This is similar to the one in Guatemala City.  It is a HUGE concrete map made to scale to illustrate the entire country of El Salvador.  This was located near the Military Museum, which we discuss in a subsequent post.

But the real highlight of our visit to the big city was a night at the Lucha Libre!  These masked and unmasked fighters put on an incredible show.  They jump and twirl, they kick and hit, the tackle and choke and make a huge amount of noise as they wrestle around and amuse the crowd.  We had a terrific time cheering for the good guys and booing the bad guys at the event.  It was two solid hours of amateur fun for a ragtag crowd that each paid about $2.00 per person.  It was wonderful!

After we had enough of the big city of San Salvador we visited the nearby UNESCO site of Joya de Ceren.  This is an archeological site that has been compared to Pompeii due to the accumulation of volcanic ash which preserved the structures.  Although no human remains were found, the buildings and temples are visible and remain well protected for future generations to learn from.

After all the cruising around on back roads, muddy highway construction and dusty parking areas, the truck was ready for a wash.  We found a wonderful car wash that took great care to clean up our truck and camper for just $5.00 bucks! 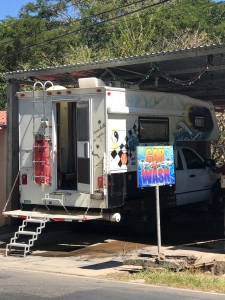 After this we were ready to tackle the El Salvador/Honduras border and continue our driving.  Our next blog post will discuss some of the military and civil war history of El Salvador.  Then we should be ready to tell you about Honduras!  Thanks for journeying through Central America with us. 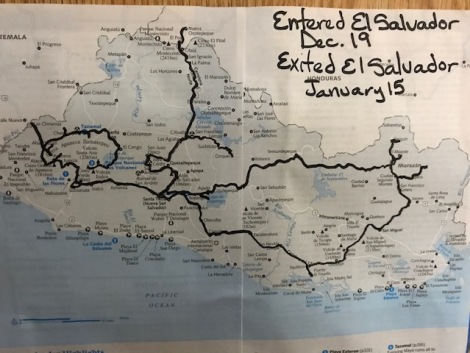 This map shows the route of our travels through El Salvador.