Mike and I travelled the length of Mexico in 2001.  We drove from Bahia de Kino to the far tip of the Yucatan and even visited Belize.  One of our favorite stops along the way was Guanajuato.  And now, sixteen years later we are back and spending some quality time in this great city.

On our way here we stopped off in León for groceries.  Maybe this photo looks familiar to our readers in campers, vans and even standard housing.  It seems like this retailer has the market share well handled.  But in Mexico it is a convenient place for one-stop shopping at reasonable prices.  So yes, we fall prey to the alluring blue sign and the roomy parking lots! 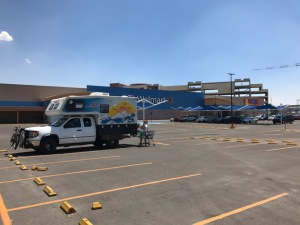 We had made plans to meet up with our old friends  The Slow Dutchman and we were all really excited for this opportunity to reconnect.  They stayed at our place in Clarkdale last year, and we spent a night with them in Baja recently.  But this time we planned a couple of weeks together.

Getting in to the city of Guanajuato requires some skill, patience and careful driving.  And as anyone who has ever been here knows, getting to Morrill RV Park is a tricky feat.  We were really unsure that the new rig would make it.  But with Mike patiently negotiating the turns, twists, one-ways and STEEP grades, we arrived at the gates.  It took a three-point turn to get in the main gate and then we slid right into our space next to the Dutchies!

The dogs were thrilled to see their friends again, and the park had a stray dog hanging around that played with Zeb for hours.  It felt great to be here and to settle in.  And this parking space gave us a quiet place to go to escape from the busy city during Semana Santa.  Notice that I called it a parking space, because the name RV Park is a bit generous for Morrill.  It is actually just a parking lot for locals- that also happens to have a few electrical outlets, water spigots and some restrooms.  So sometimes it is quite crowded with the neighbors cars and a few other camping rigs mixed in.

This was a big holiday in Guanajuato and all across Mexico.  Semana Santa is the term for the holy week celebrations that take place throughout this country.  And these were no exception.  Once we were settled in, we walked down to the Centro district and found a religious production filling the street.

Ladies preparing to carry the Virgin Mary in a parade 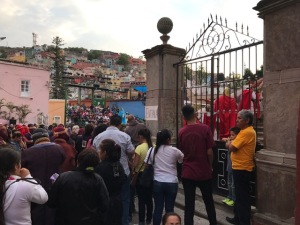 A large crowd gathered to watch the production.  Notice the Roman soldiers behind the metal grating.

This large crowd has their heads bowed, praying with the father that is leading the production.

I have no idea on the significance of these costumed characters, but they were a part of the production

Here is a little video of the crowd, the production and the sermon that was taking place.

After a fun day on the streets we spent the next day working on projects at the RV park.  The Slow Dutchman kept trying to hide Mango from me.

but I once I found her, I could not bear to disturb her.  She seemed to be enjoying the opportunity to hang out in a VW van (I can’t blame her for that) Even Seri took a turn hanging on in The Slow Dutchman van!

Mike and Bram enjoyed some time in the shade while playing with LED’s.  Soon the camper will have more LED’s inside and a full, four-sided light show on the outside. 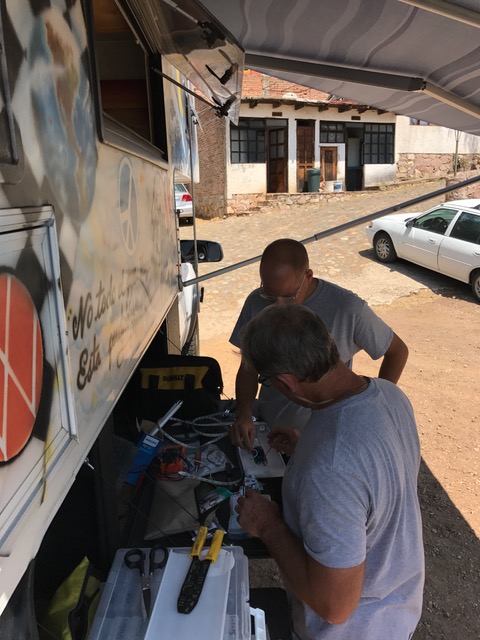 The views of the city from the RV park are really enjoyable.

All the bright colors are terrific.  Walking around town gave a chance to see street murals along the alleyways (those walkways are called callejones).

We learned that the best ice cream in town is sold on the street by vendors who make it fresh at home each night! Flavors like guayaba, cheesecake, mamey, coffee, oreo, kiss of an angel (cherry chip) and chocolate are delicious.  But none of us have been brave enough to try the corn flavored ice cream yet! 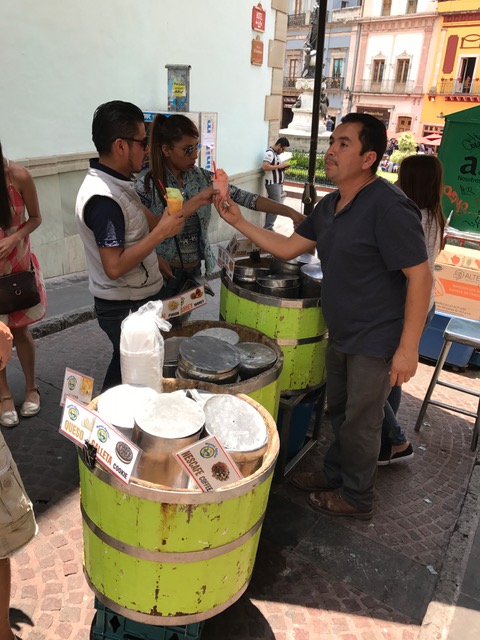 The homes here are built upward – one on top of the other – as they climb up the hillsides. 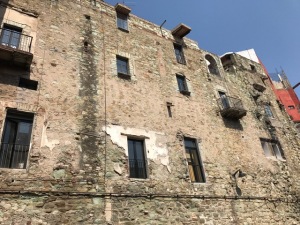 This requires feats of engineering and blends of styles as owners add on, build upward and new neighbors move in.

And because everything is on a slope, when you walk up and down the hills you are walking past doorways and balconies.  Here is an artisitic take on balcony security, to keep folks from climbing up and into their house. 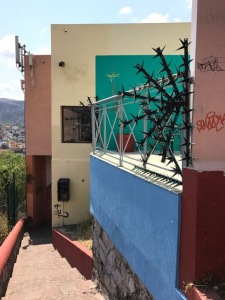 After a few days of exploring the city, we were ready to proceed with our next step.  We rented a house and enrolled in Spanish school.

A fun fling with margaritas before school starts tomorrow!

Leaving Morrill RV park, we drove down into the city for our rental house. Parking was a little tricky, so we settled for this spot.  Hidden in plain sight! 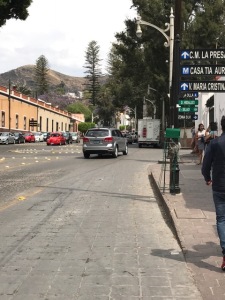 The next day we would move it closer to the house and a little more secure.  But for the first night in our new place, this will work.  School starts tomorrow and we are excited!

In our next post we will show you our rental home, talk about attending Spanish school and share more photos and info about this wonderful city.

2 responses to “Guanajuato; we said we would be back someday.”