Mazatlan is probably viewed by most people as a resort town, a tourist destination and a cruise ship stopover.  But we managed to experience Mazatlan very differently.

We arrived on a busy Sunday and quickly located a boon docking location using iOverlander.  This location was about 8 miles from hotel row, down an obscure dirt road.  When we first arrived there were a few local families spending the afternoon at the beach.  So we took a temporary spot while the sun set over the Pacific. 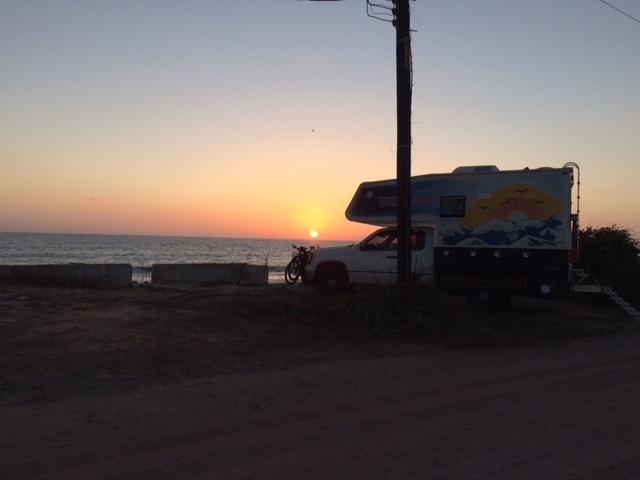 Great photo except for that power pole, huh?  (We will talk about that pole again later, wait for it!) After the locals went home, we picked the spot we had our eyes on.

We nestled in to an old rock wall, near an empty house.  The dirt road saw a little traffic, but the breeze blew the dust the other direction. We were just steps from sand (off a 5 foot ledge) and the waves were right out our back door.  The ocean breeze blew through the back door and kept the temps comfortable. This was a great spot. 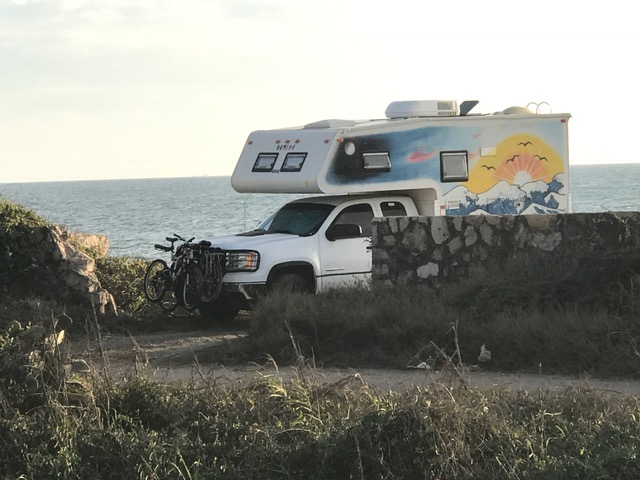 Because the tide was extreme, there was a deep cut in the sand below the camper.  The drop off was about 5 feet.  But the dogs loved running up and down the little hill between the beach and the camper.

This photo makes it look more extreme than it is.  But you get the idea.

Once we were settled in we tried to fire up the water heater for a shower, but it wouldn’t light.  Mike took out his tools and tinkered it with for a while.  His patience and ingenuity paid off, it lit up and we had hot water for showers and dishes.

The sunsets were beautiful.  But the ocean was rough both day and night! The crashing of the waves woke us up, and sent us to sleep.

We spent two full days enjoying this great location, relaxing, reading and walking the dogs along the beach. We explored the estuaries across the road, and walked both directions looking at the few houses along this beach area.

Then it was time for supplies and laundry so we ventured in to Mazatlan.  But we headed for the other “side” of the city; the side where the locals lived and worked.  First we found a great little lavanderia, where we filled the wash tubs with a hose because the water pressure was super slow.

And there were rocking chairs to sit in while waiting for the wash to finish.  The open air setting allowed for perfect people-watching on the busy corner. 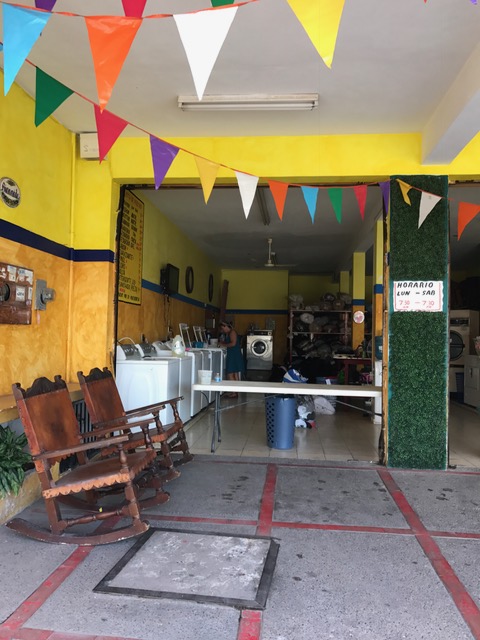 While we were waiting, we walked to the store.  These were the few oddball items which we needed,  not unlike a typical stop at a store in the USA. Some clorox, a plastic pitcher, dog food and a bottle brush completed our shopping list.

We grabbed lunch around the corner at an organic food lunch counter, and a fruit smoothie at the juice stand.  Then back to finish the laundry. 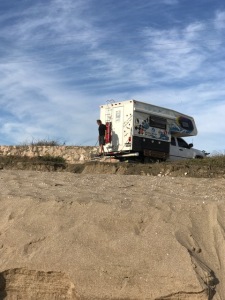 When we returned, our spot was still open so we settled in, made dinner and played a game of Yahtzee before bedtime.

Now….. remember that power pole?  Here is where things get interesting……… somewhere around 12:30 at night there is a sparkly flash in the sky and the sound of crackling.  We wake up and look outside, assuming it is fireworks on our deserted beach.  It takes a few minutes to register, but what we are seeing is electrical sparks, and the crackle and sizzle of electricity as it singes and burns the bushes.

It is totally BLACK outside, as the moon is behind clouds.  But for this retelling, I am inserting another daytime photo of the truck behind the rock wall. 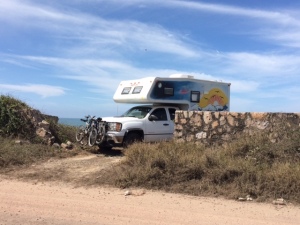 Because what has happened is that a power line has fallen off that power pole and landed RIGHT ALONG THE ROCK WALL!! This means that the line has missed our truck by just inches.  It actually may have hit the bicycle tire (shown in the photo) as it was falling. 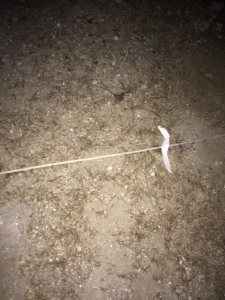 Now this power line is laying along the ground, and draped over the bushes you can see in the photo above.  And every few minutes it snaps, crackles and comes to life!  This sends sparks through the bushes and up in the air RIGHT IN FRONT OF OUR TRUCK!!!

So to try to prevent any sort of arcing to the metal of our truck or batteries in our truck and camper (which are literally about 2 feet from all this electricity) we decide to back up the truck a bit.  But remember the photo of the hill of sand?  We can only back up about 6 feet before we will slide off a ledge.  Nonetheless, we want as much space as possible between our truck and that hot wire. 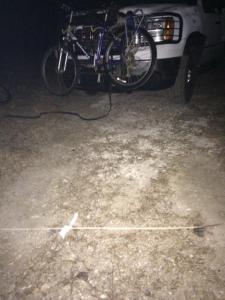 In this photo (taken at about 1:30am) the black line is the bike cable lock.  Mike removed it to take off the bicycles in case we needed to ride away to get help. The HOT electrical line is laying on the ground about 8 feet in front of the truck.  Notice the black singed area on the far left of the photo.

This is that spot in daylight.  It is where the wire first touched down and burned the weeds and melted the sand.  YES… MELTED THE SAND.  The next morning I picked up the little bead of glass that was formed by the energy of the fallen electrical wire.

It is shaped a bit like a beetle, but it is hard, shiny, glass!  We will keep this as a reminder of that crazy night on the beach near Mazatlan.

To bring this drama to a close ….. at about 2:00am the CFE trucks pulled up.  Four guys and two trucks.  We were so relieved.

They looked at us, trapped on the other side of the hotwire and jumped to action.  They clipped the line off of the next pole.  Then wound up the section of line that had fallen down.  It turns out it was draped over two live wires, which is why it was still sparking and spitting every so often.  There were a few more crackles as they finished up.  But once the line was removed, we pulled the truck forward off the ledge and settled in to try to get some sleep.  We had visitors coming the next morning!

We moved a little slowly the next day.  And lucky for us, the ferry from Baja did too! We had plans to meet Donnie and Wendy and VinnieVanGoGo.  We met Donnie a few years ago when he passed through Clarkdale. And we had followed their travels on Facebook.  They had taken the ferry from LaPaz to Mazatlan overnight and were going to hang out with us for the day/night! 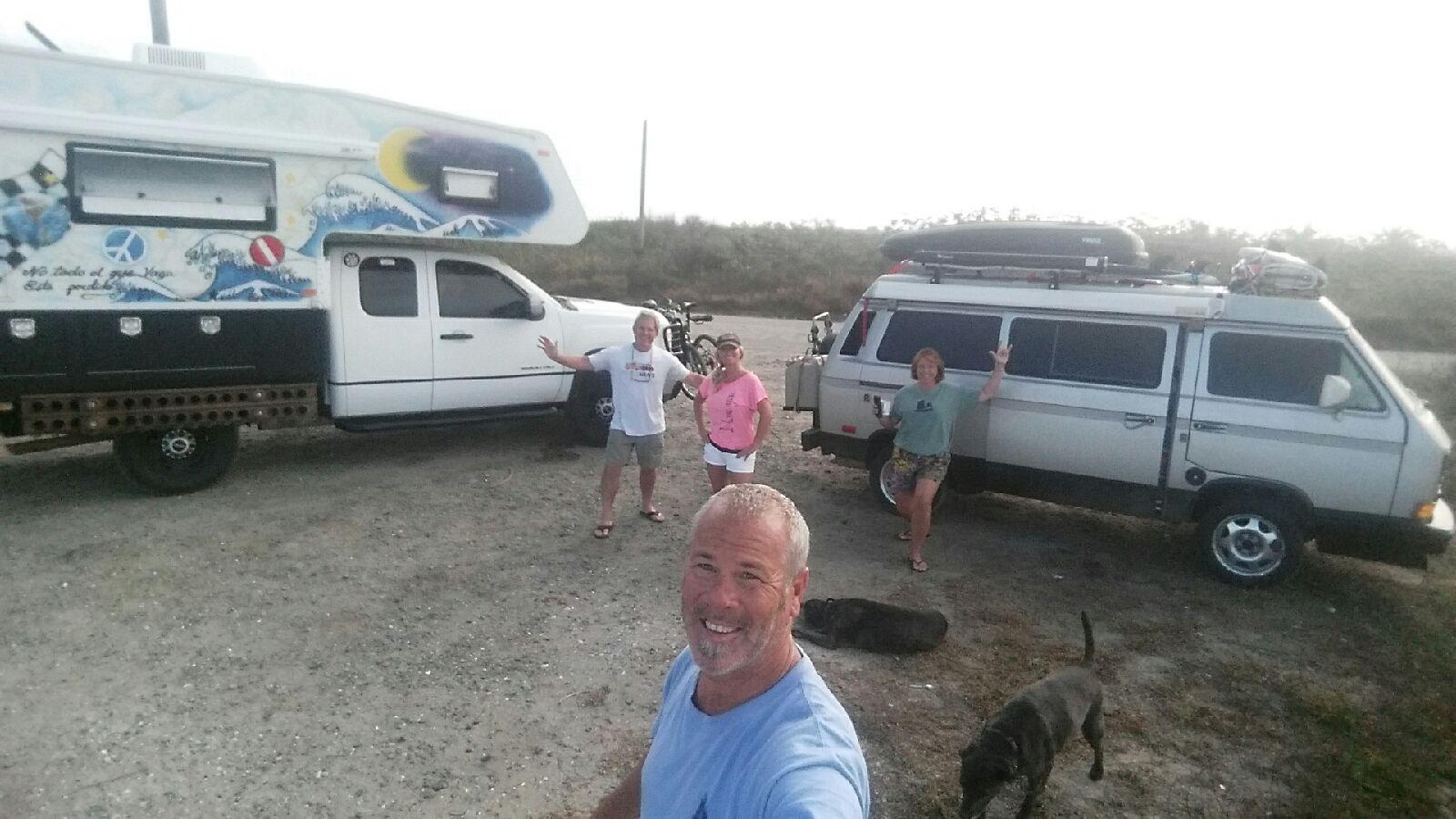 When they arrived we went out to lunch at a fancy beach restaurant down the road a bit.  Then we moved to a larger parking space.  Later some Canadians stopped by to visit. They drive a Roadtrek and live in Mazatlan part of the year, and in Edmonton part of the year.

That night we all contributed to a yummy dinner with Donnie and Wendy (try her potato soup, it’s amazing). The next day we said goodbye as they headed down the coast, and we headed inland towards

the Sierra Madres.  Our time in Mazatlan was filled with relaxation, excitement, sparks and good energy- it was electrifying!

14 responses to “A different look at Mazatlan (electrifying)”