With the trip well underway, we were given the opportunity to drive on our own along the East coast of Australia.  This took us through many small towns, beaches and sights to see.  We slept at some fun places, saw some interesting animals and ended up in Melbourne for a flight to Tasmania.

At Camel Rock we encountered a dog beach and watched this lady struggle with her little Whippets in the wind. 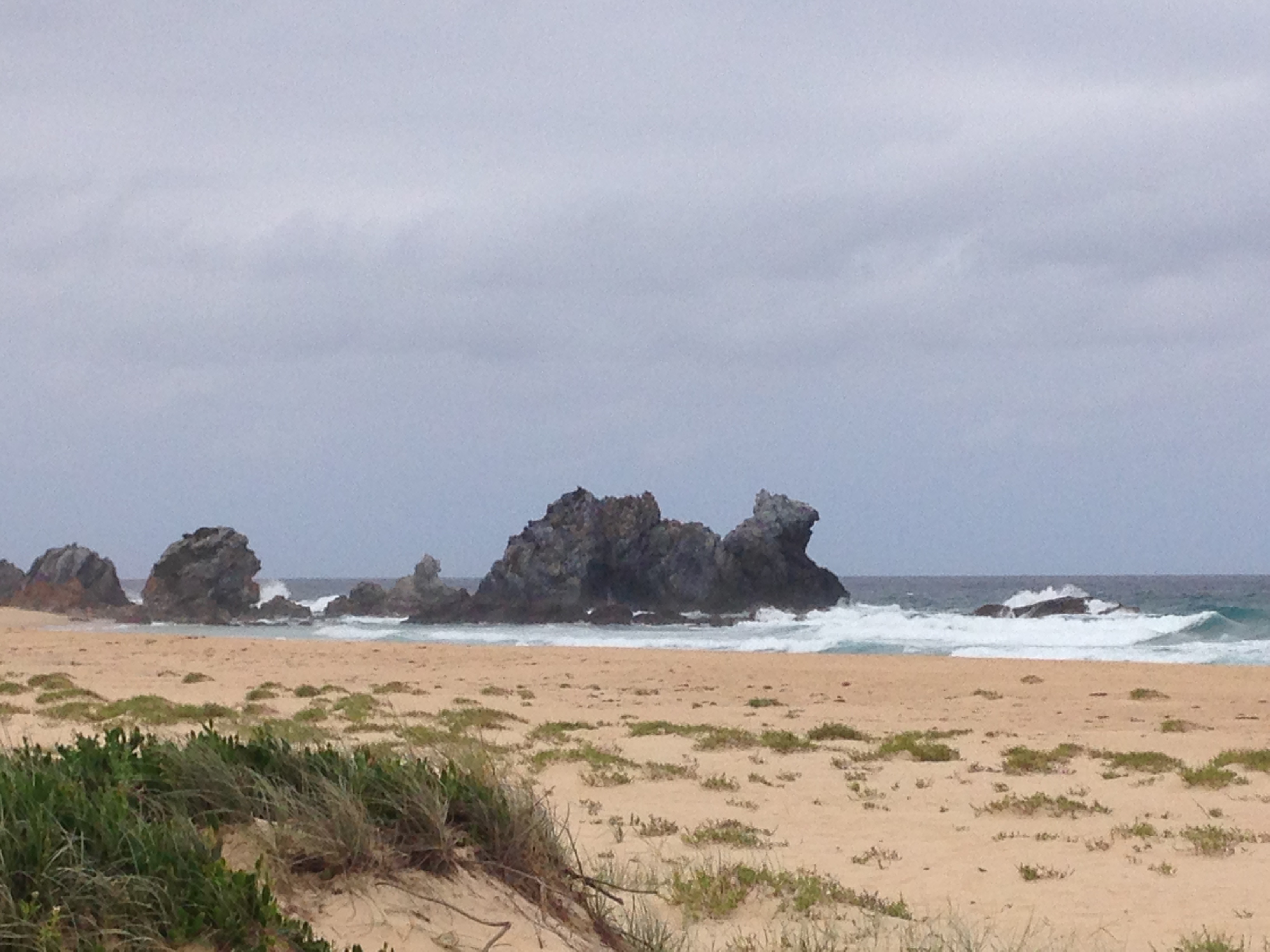 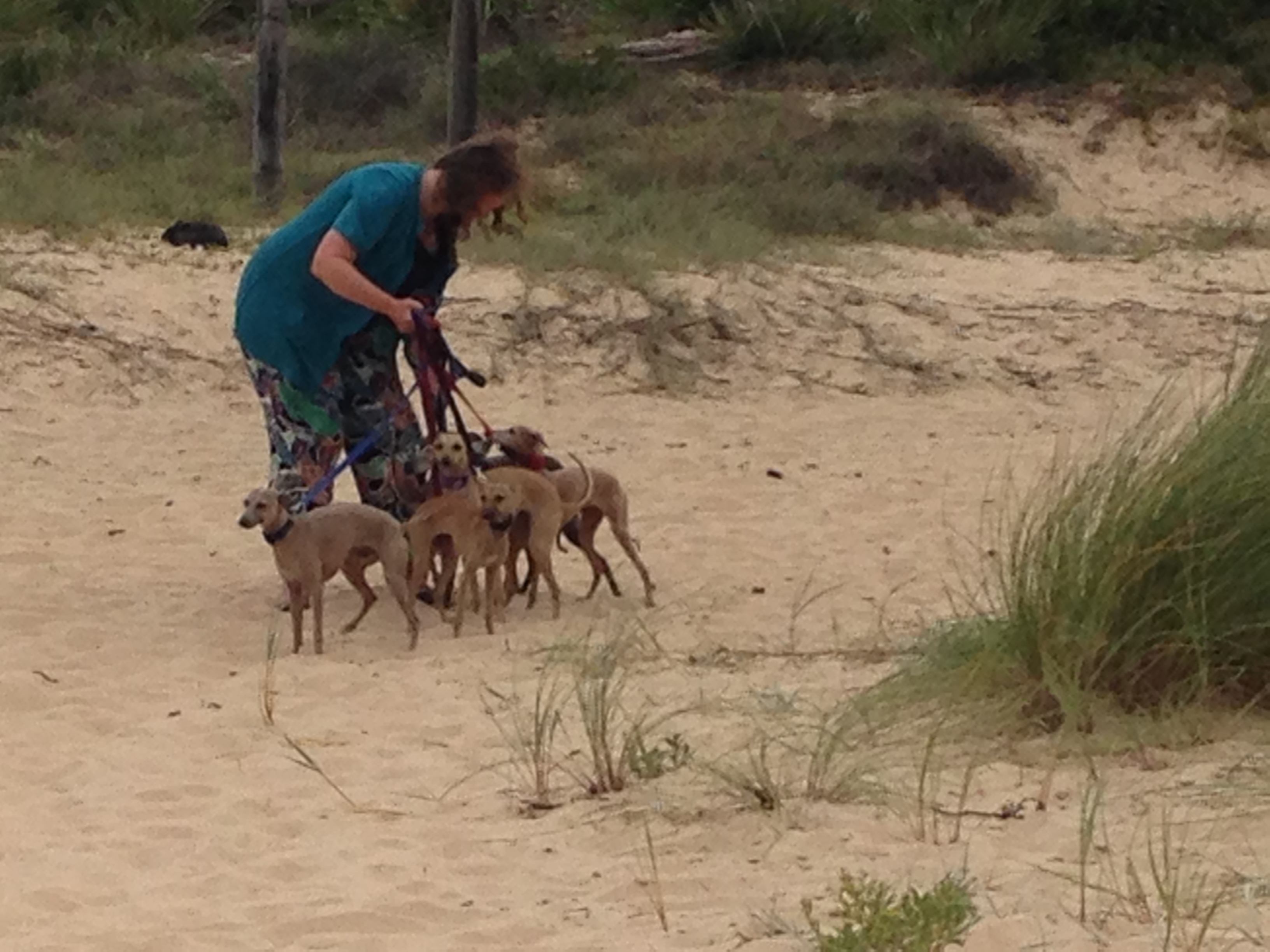 And we stopped at Pebbly Beach to try to see some kangaroos that reportedly graze along the beach.  But all we spotted there was this huge goanna that had chased off a picnicking family. 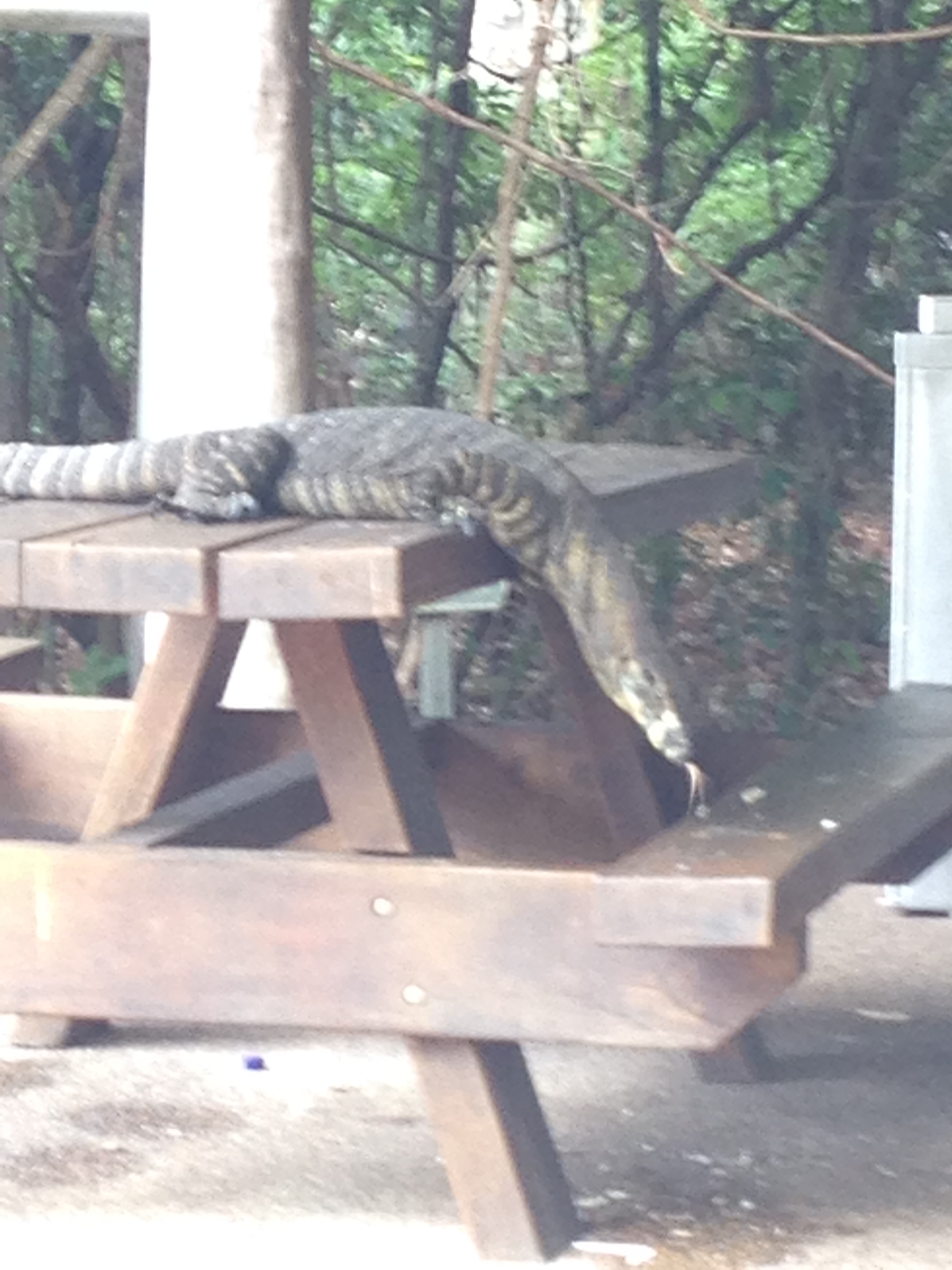 As we traveled through this shore line and bush we selected a variety of lodging.  One night we spent in a pub accommodation in Bermagui (pronounced Bemidji) and went geocaching at their town swimming pool.

Another overnight was spent at a small farm which we booked through Air B and B.  The family was using guinea pigs to keep the lawn trimmed and tending a beautiful vegetable garden.

But one of our favorite stops may have been Potoroo Palace, an animal sanctuary where we learned about many Australian animals and had the opportunity to see them up close, very close. 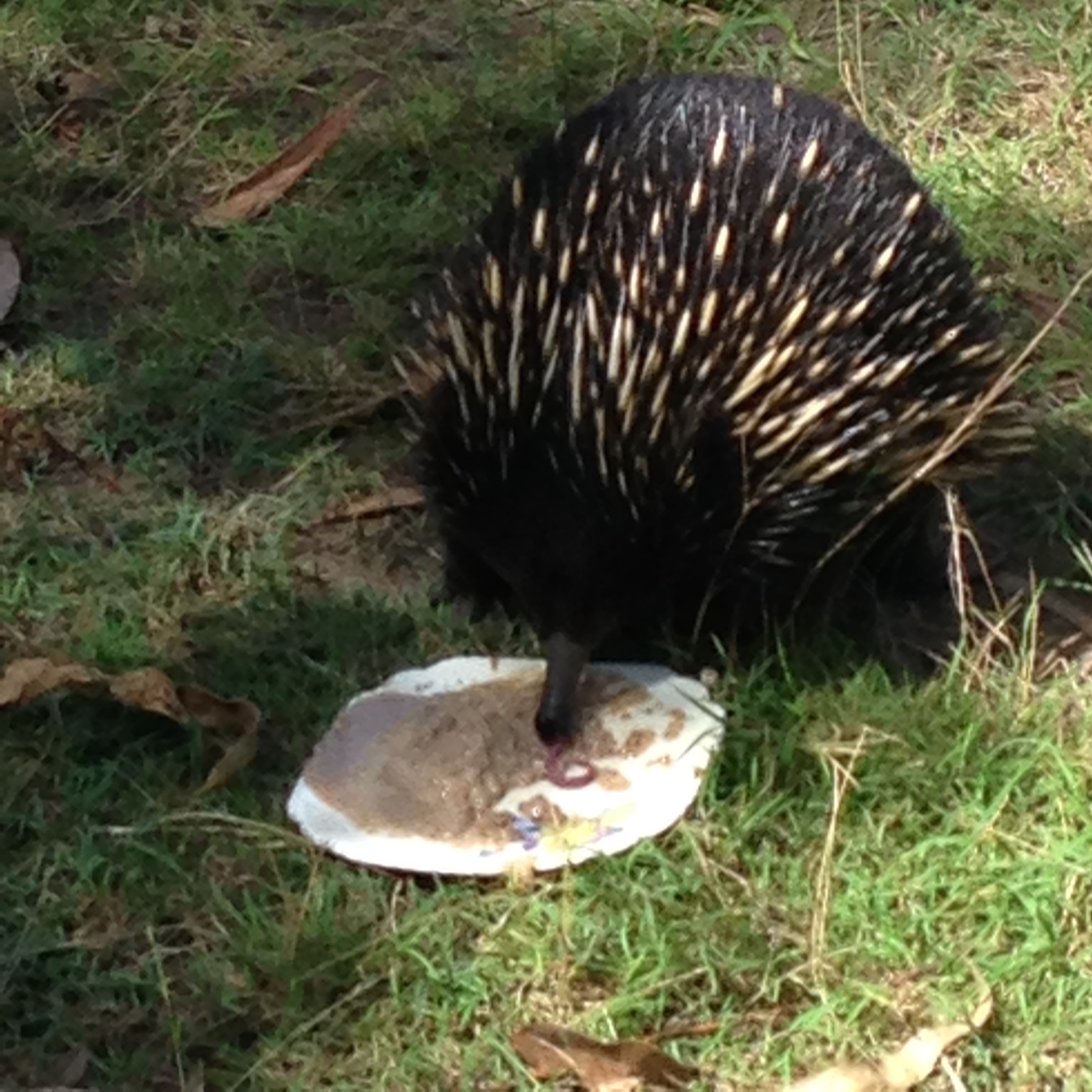 Echidna feeding time- look at that tongue.  Sharp, hard quills, but they do not come out (like a porcupine) and they have a long snout in the front.

They use those claws to pull ticks from between their quills. 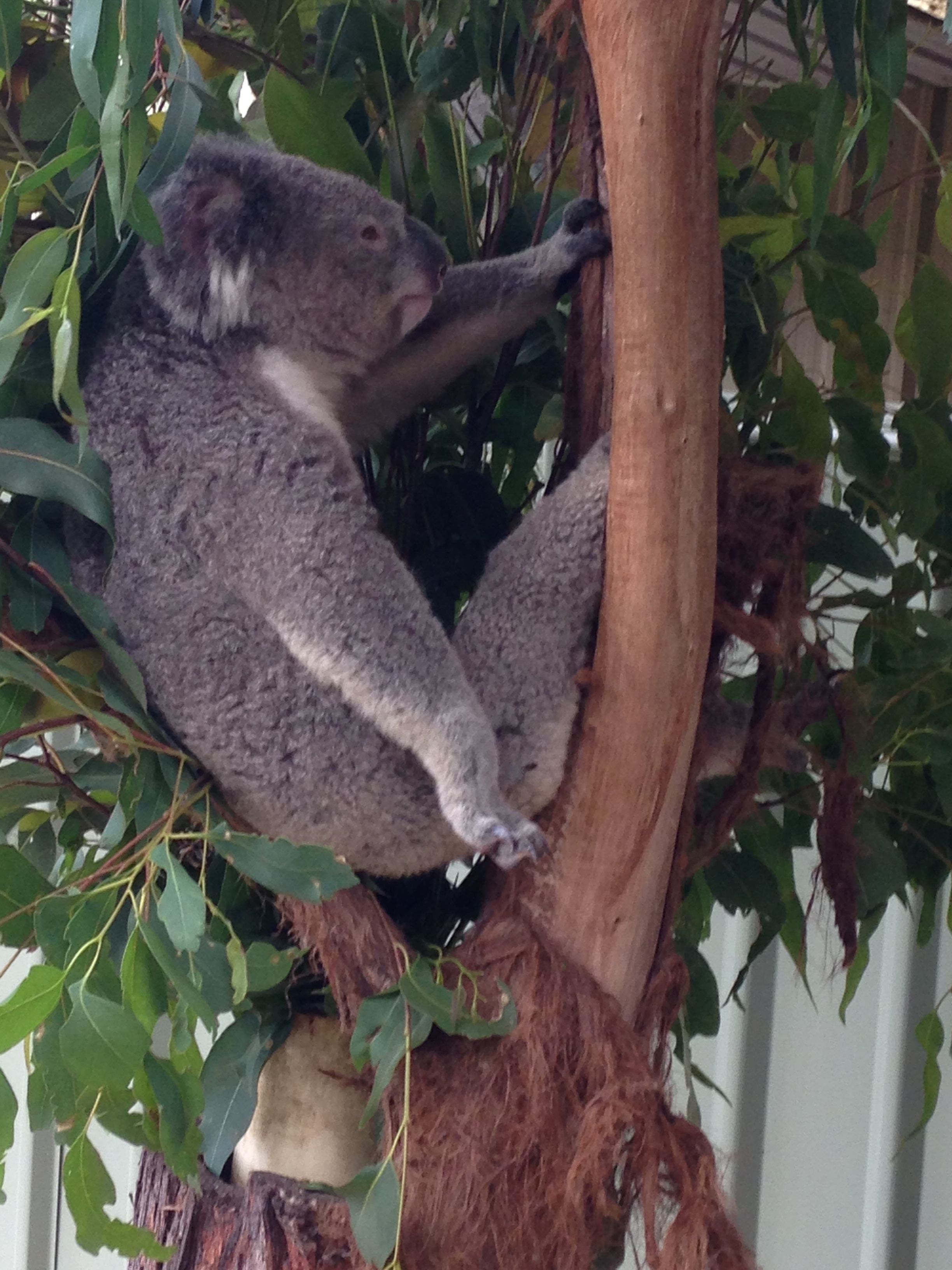 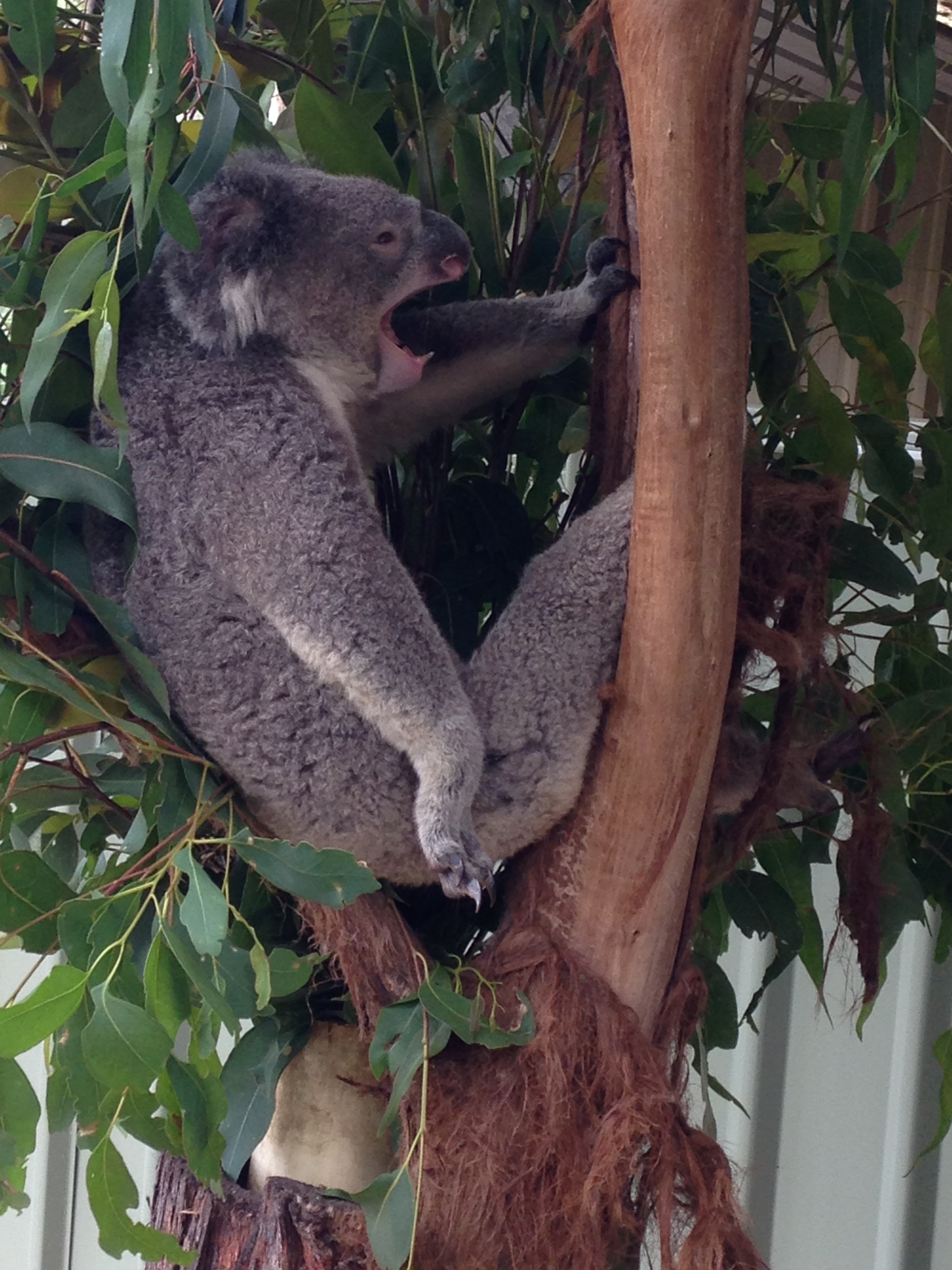 Did you just take a photo of me yawning? 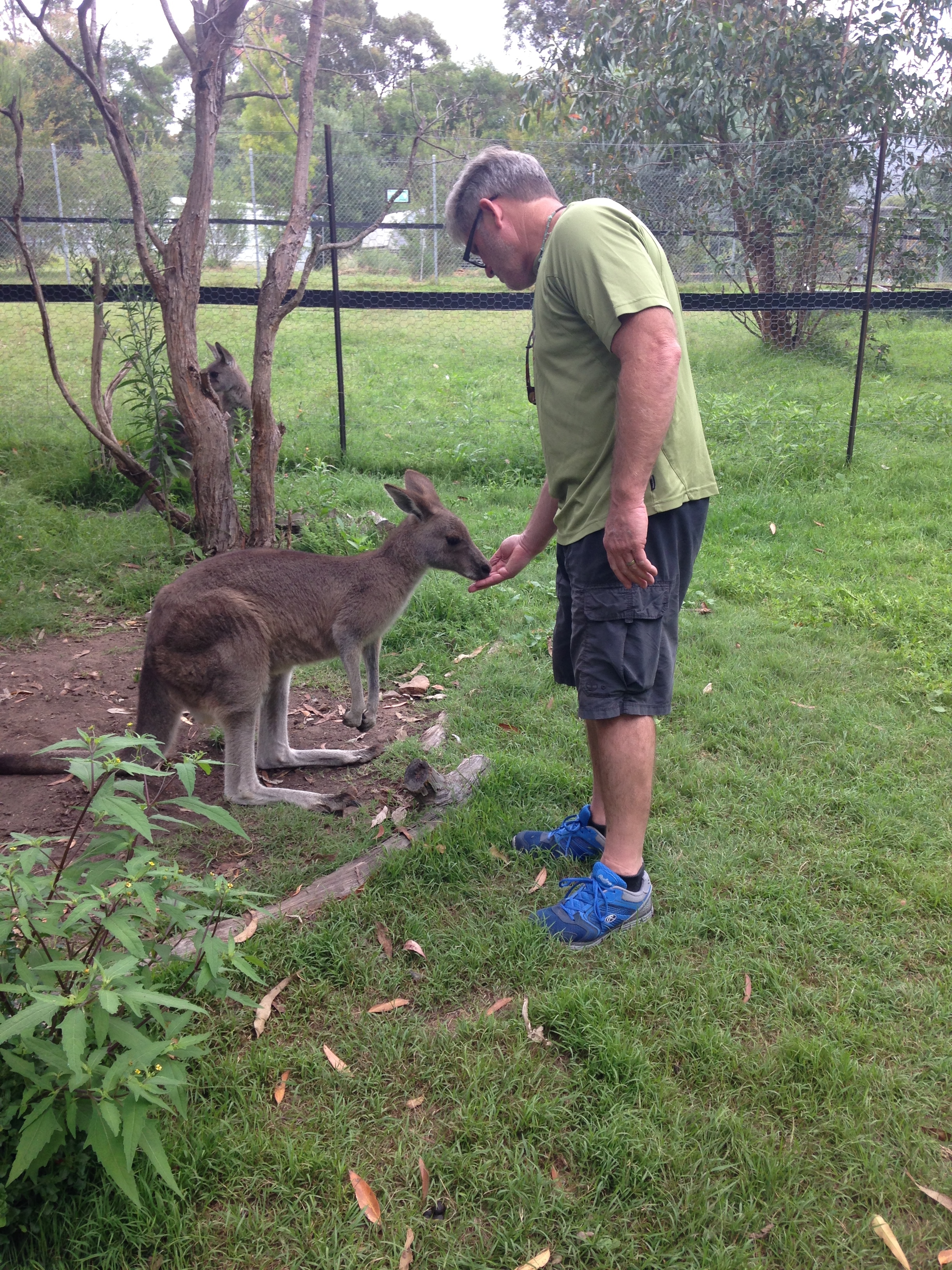 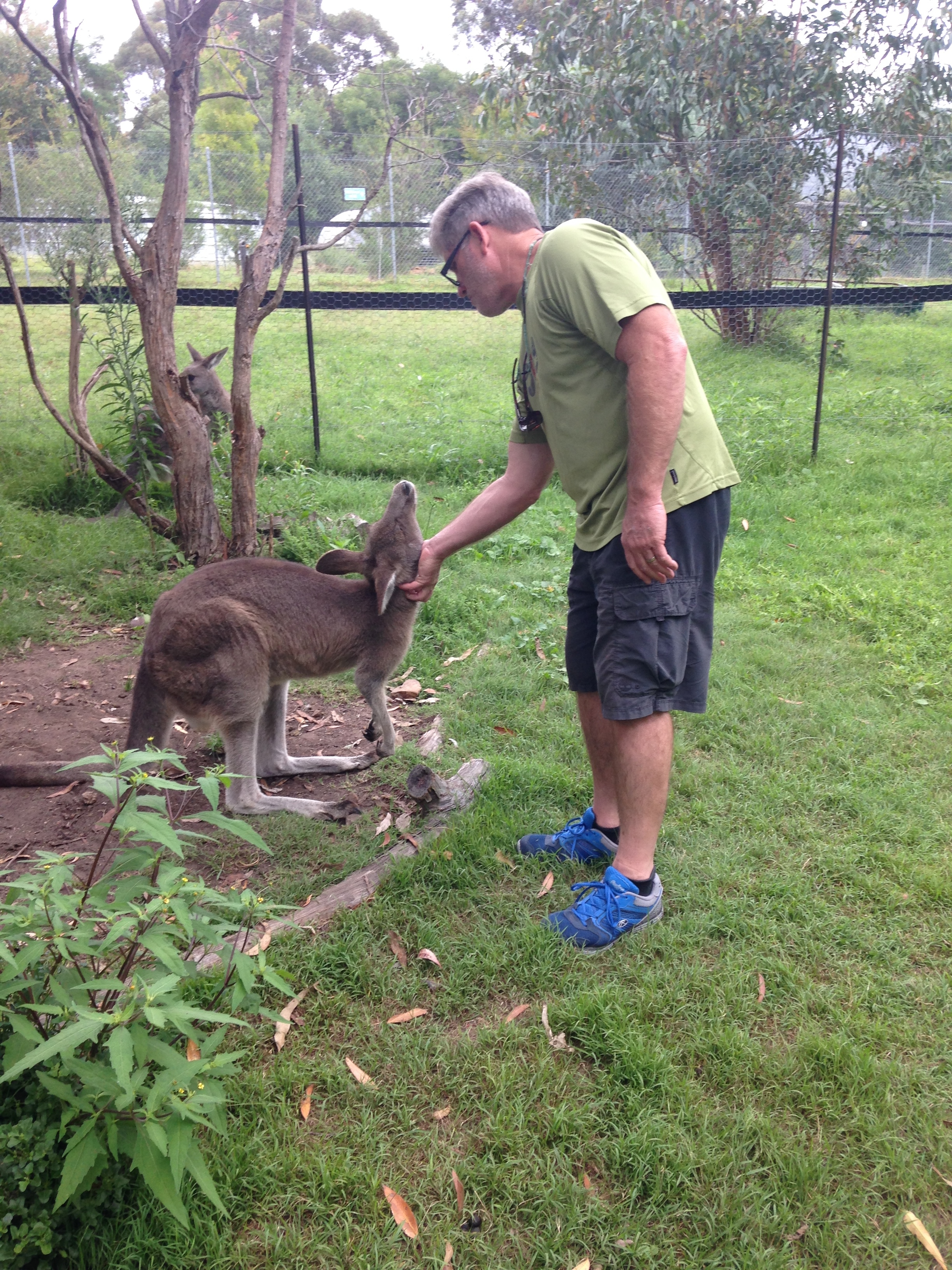 Yeah, the food is good, but what I really want is a scratch!

Apparently Mike has a way with ‘roos!

Scratch me right there!

This animal sanctuary had free-roaming kangaroos that were accustomed to human interaction.  They either were disinterested in us, or they were eager to receive a nibble of food and a serious scratch behind the ear.  Mike made a friend!

Our last stop along this route was Phillip Island for the little Penguin Parade.  While you cannot photograph the actual penguins (it is night time when they march in, and the flash is disorienting) you can grab a photo of the penguin houses before they are occupied.

The little wooden boxes are penguin houses, some also live in the natural burrows along the hillsides.  The dark spots here are wallabies which graze these hills like rabbits.

As soon as the sun goes down, thousands of penguins come ashore and march up the hills into these little burrows for a brief nights rest.  It is quite a fantastic spectacle to observe.

Our drive ended in Melbourne where we caught a plane to Tasmania.  This island state of Australia is known as an outdoorsy place.  And we were really looking forward to meeting with the family of another teacher that had stayed with Geneva over 18 years ago.  Jetstar to Tasmania = $115 usd and a plan for a trip to the last solid land before Antarctica!

One response to “Driving on our own through Australia!”